Strawberry Season is Too Short! 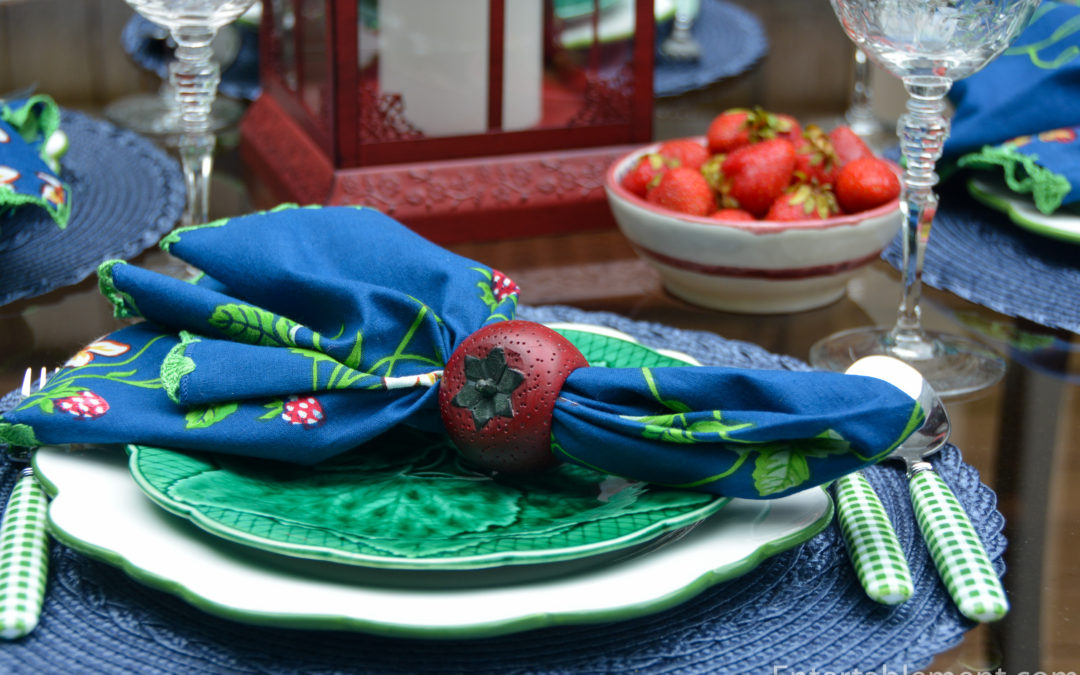 Back in the day, strawberries were seasonal. For those of us growing up in the Frozen Northern Tundra known as Canada, that meant the last two weeks of June and the first week in July (maybe) were spent in delightful gluttony of all things strawberry: plain with a dusting of sugar or a splash of cream, decadent atop rich shortcake oozing with whipped cream, chilled inside pie, or frozen in a shake or ice cream cone. 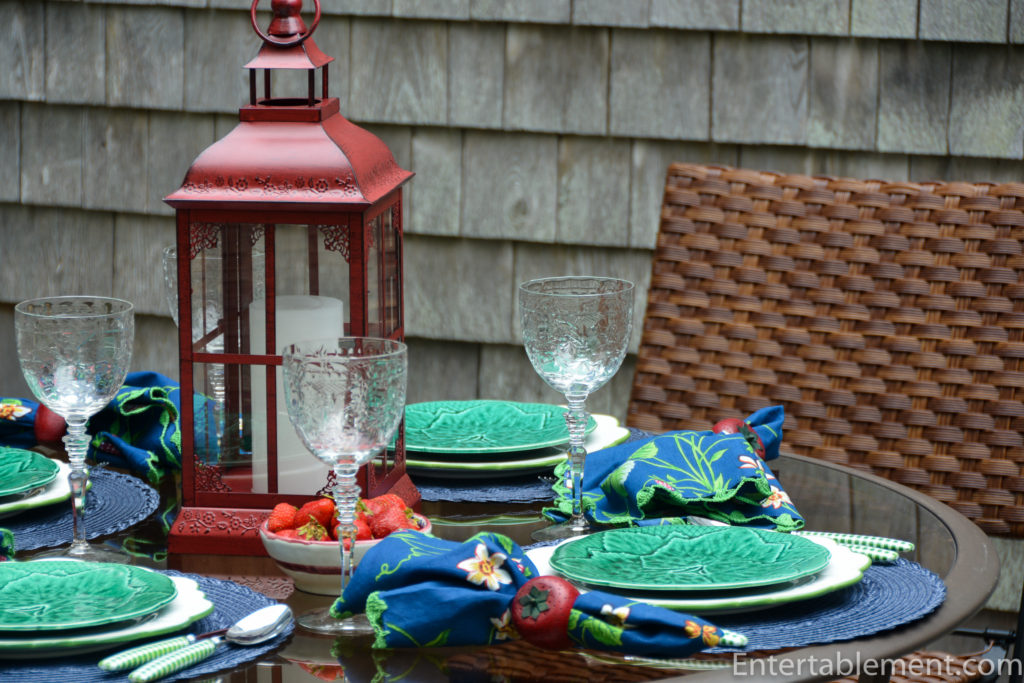 Now we get strawberries all year round, and they the gamut from succulent, juicy berries to tasteless rocks. You never know quite what you’re getting until you get home and do the taste test (unless you’re bold enough to conduct your taste test in the grocery store before making the purchase). 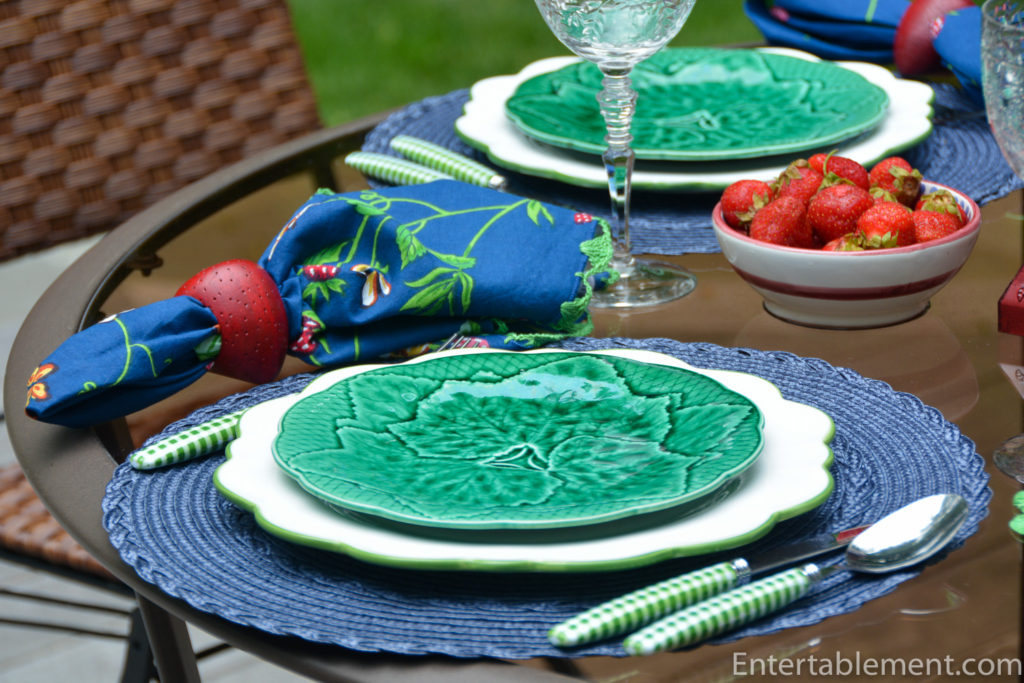 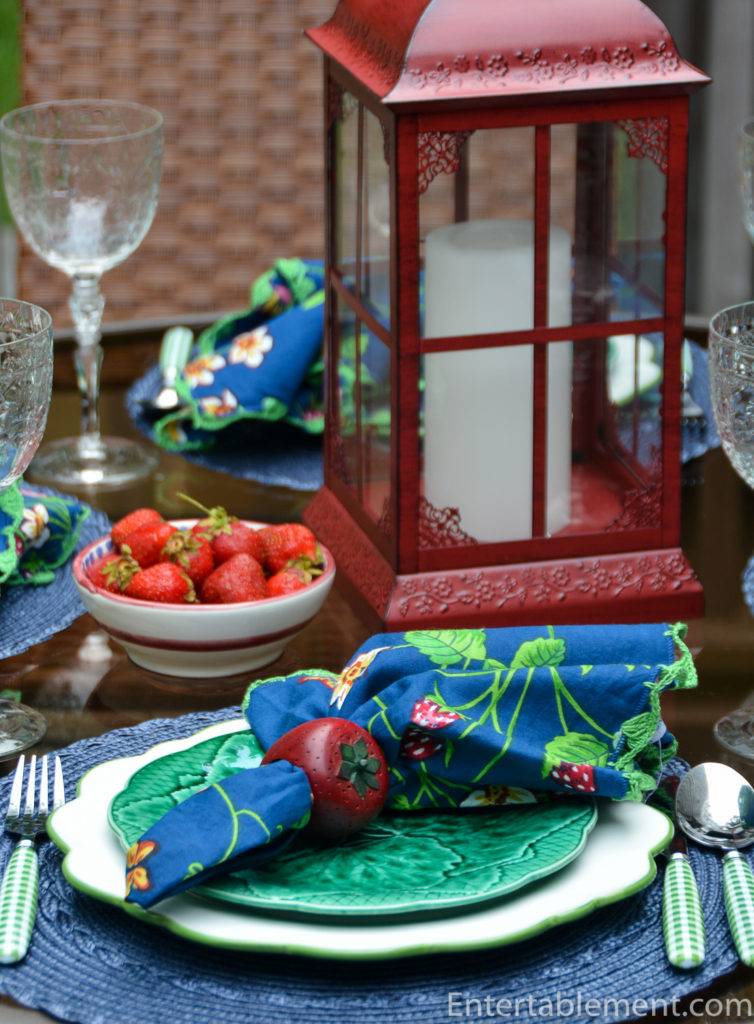 In delirious possession of a quart basket of the little jewels, I conjured up some shortcake with frozen biscuit dough I had leftover from making a cobbler and added a swirl of whipped cream. Very happy campers in our house that day. 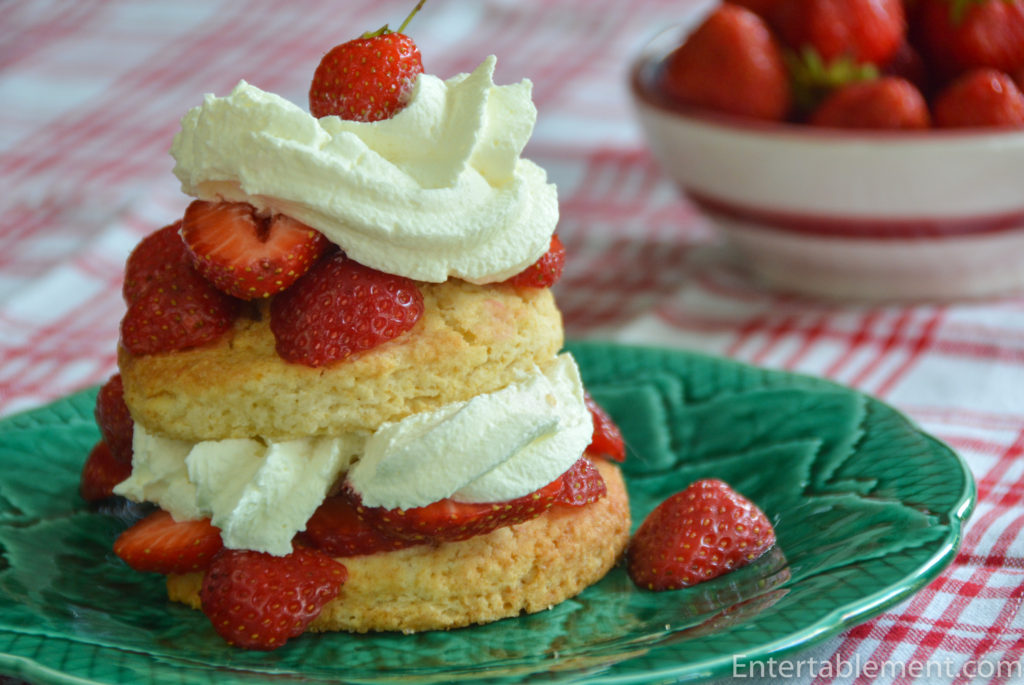 Earlier this year, I’d been happily contemplating the upcoming strawberry season and went hunting for strawberry themed tableware. A few items swam onto my radar, among them some striking napkins from April Cornell –appropriately named Strawberry Fields  – on sale, no less. 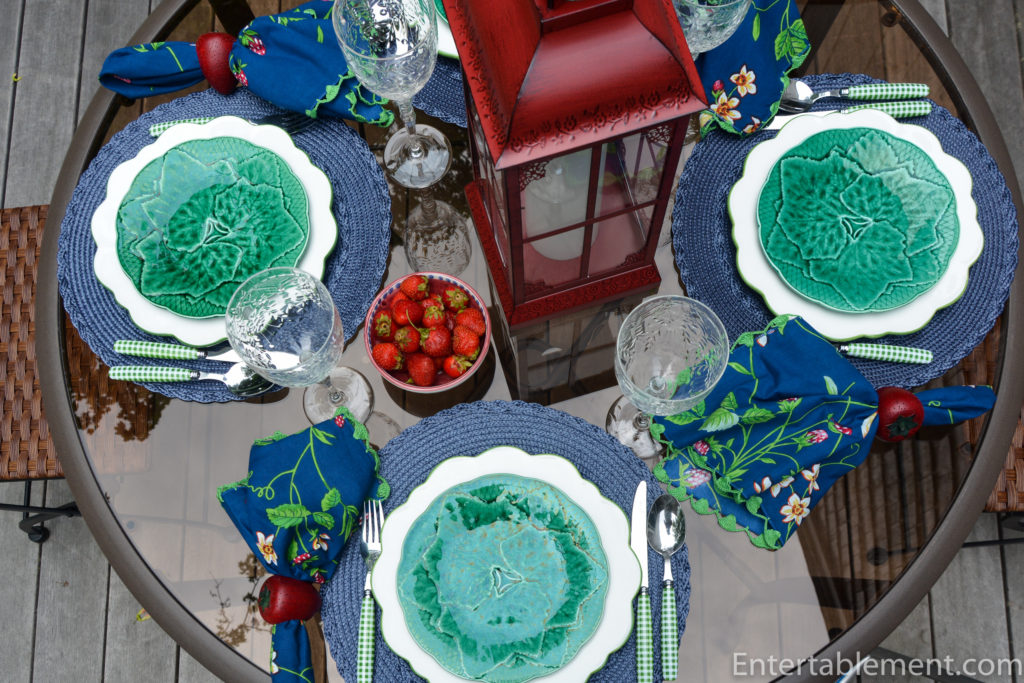 The deep blue background and brilliant green crocheted edging really caught my eye. When you think “strawberry”, you think pink (or red), not often navy. But here we are! 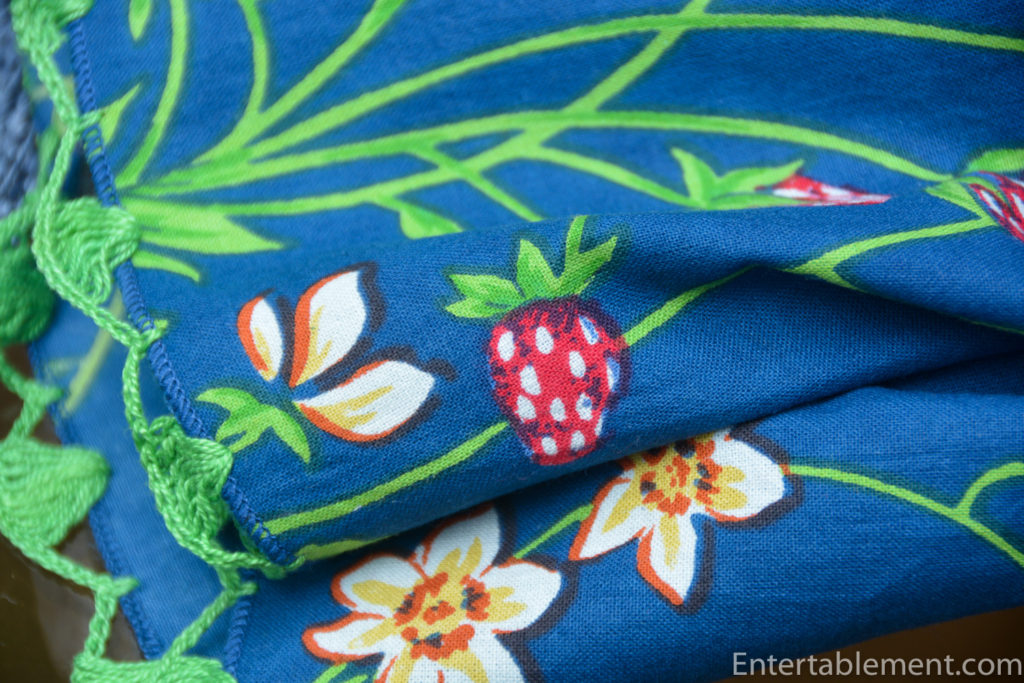 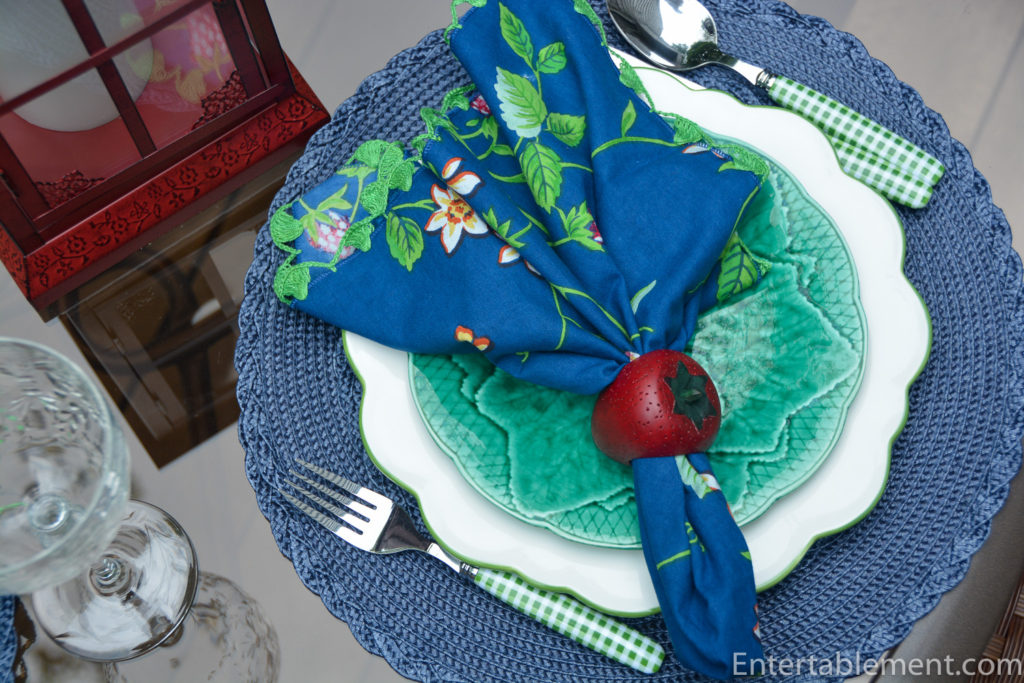 Since the napkins were the stars of the table, I worked backwards from there. More often the plates are the jumping-off point, but this time they played a supporting role. 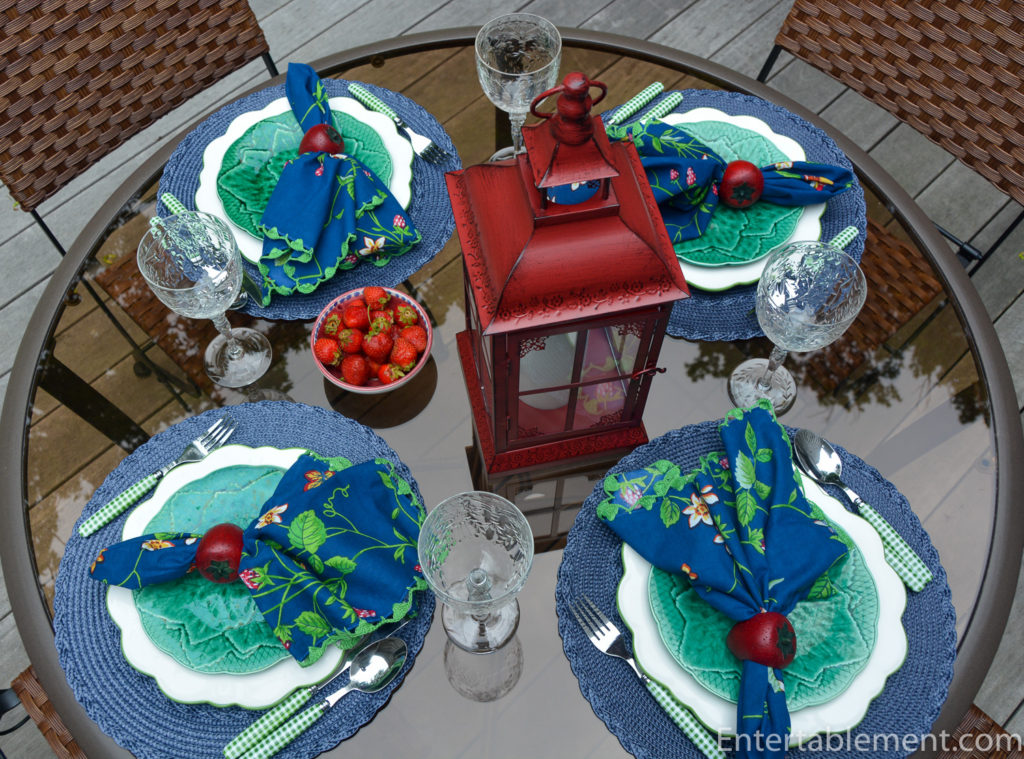 The dinner plates are Aerin Scalloped in green from Williams Sonoma; the salad plates are vintage Gien that I came across on eBay a few years ago. I love them, but they have an annoyingly blue undertone that renders the green “off” more often than I’d like; it’s jarring, rather than blending. 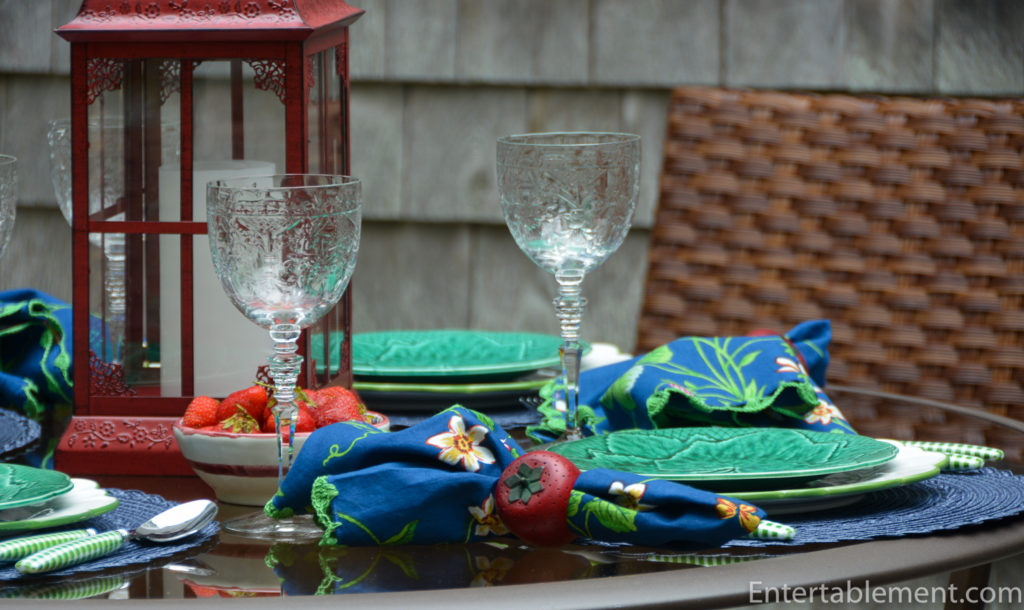 The gingham cutlery is another eBay find; only four place settings, unfortunately. The placemats are from HomeGoods. 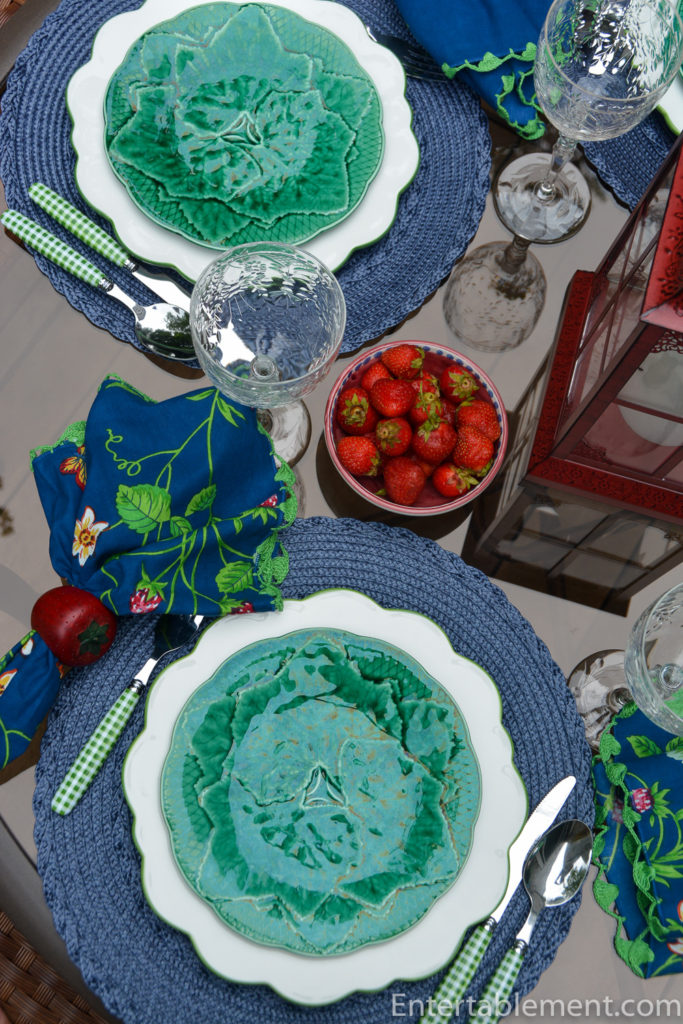 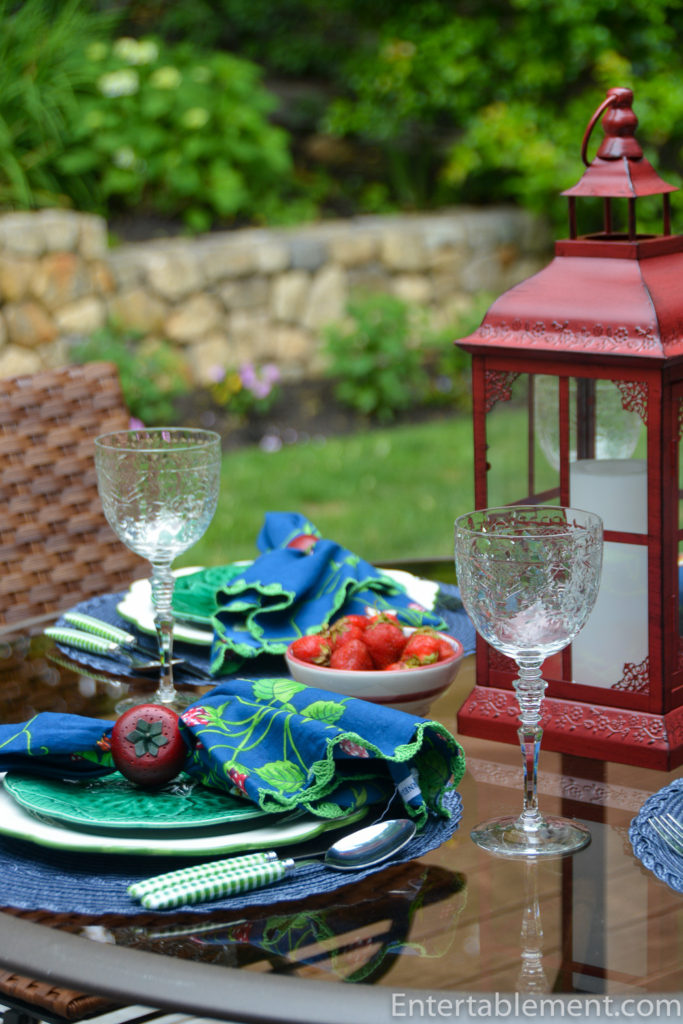 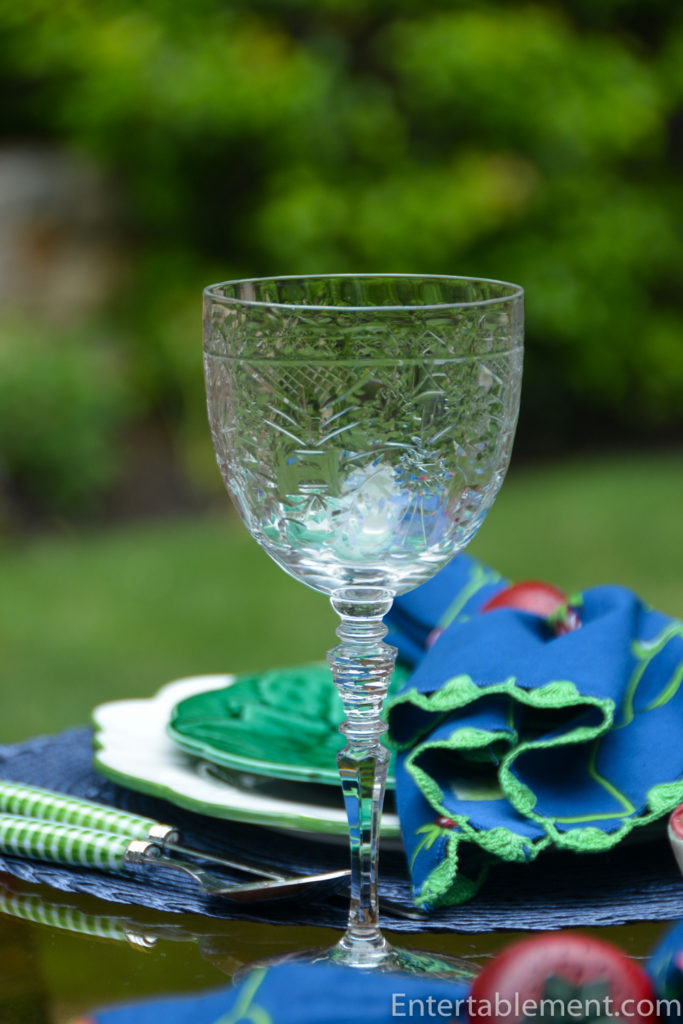 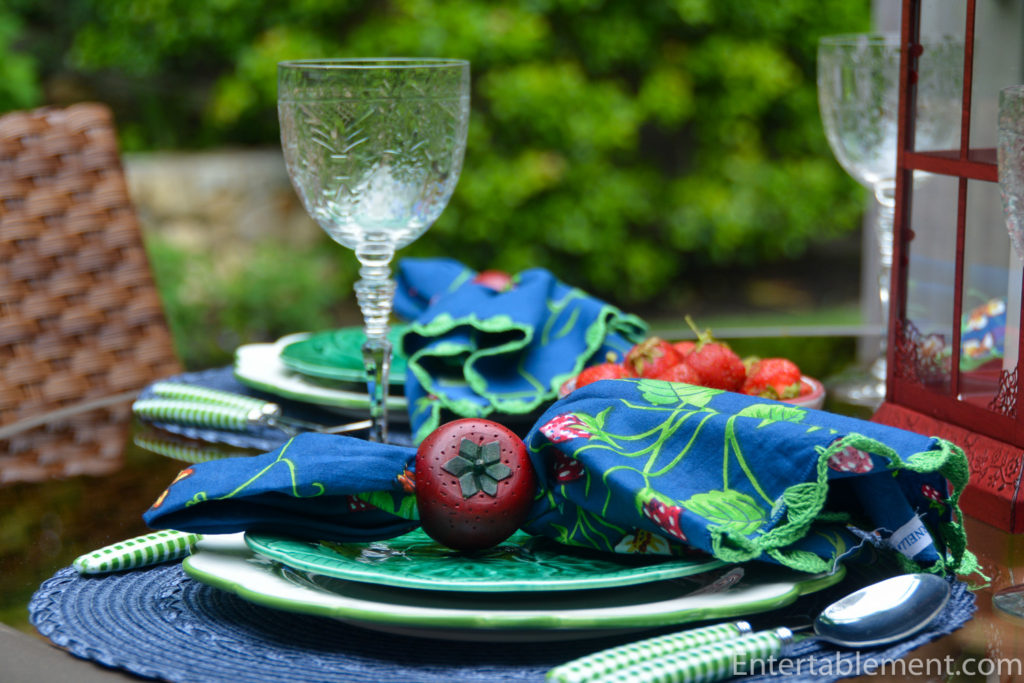 A bit more red was needed to balance out the table, so I hauled out the large Reina lantern procured from Pier 1 a few years ago, and still available. 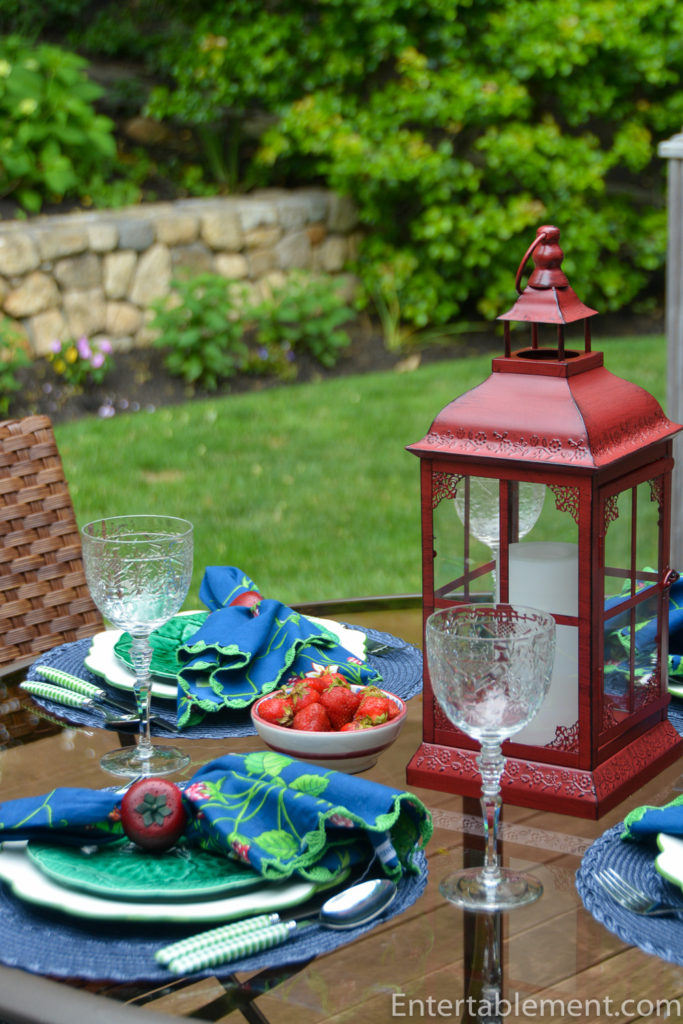 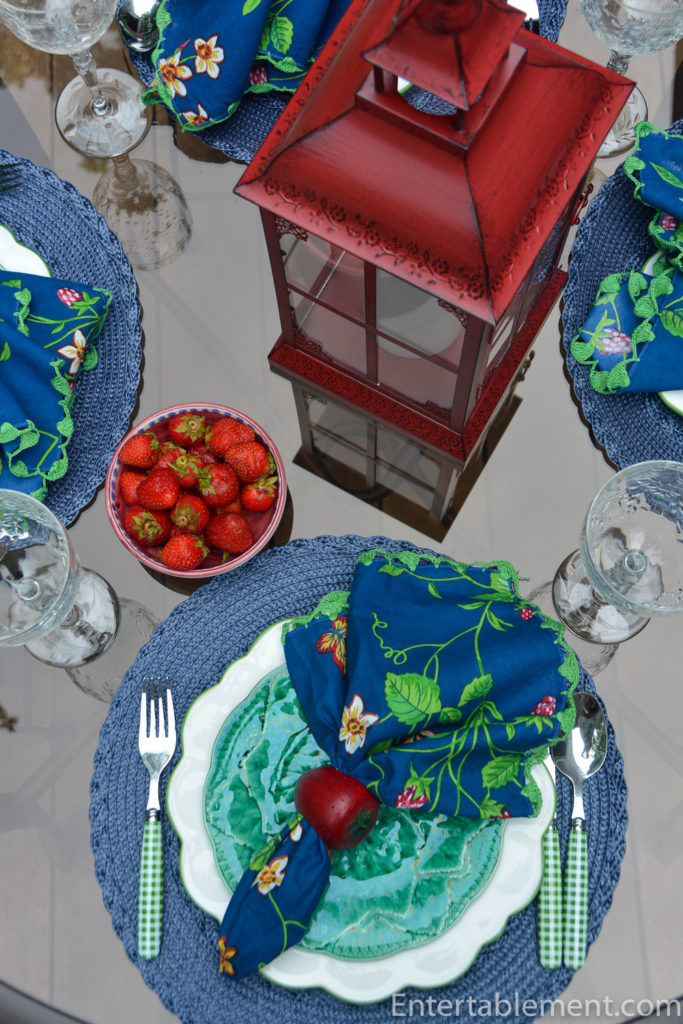 We’ve passed the middle of July now, and alarmingly, the Back To School ads have begun. Yikes! I’m eager to savour every minute of the summer season, filling the memory bank with long walks on the beach at low tide, the waves swirling over my bare feet and beach picnics of lobster rolls and tangy coleslaw (and the occasional french fry). 🙂 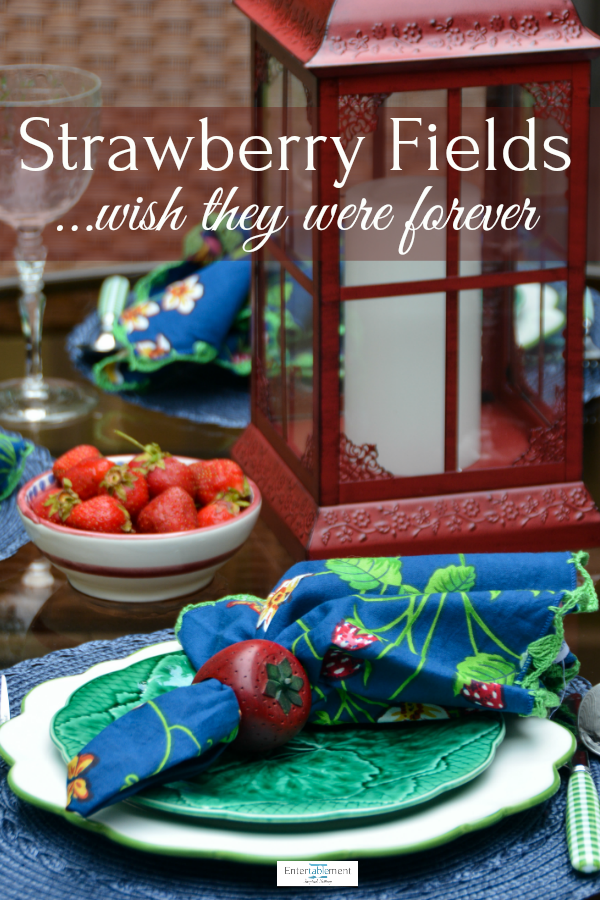