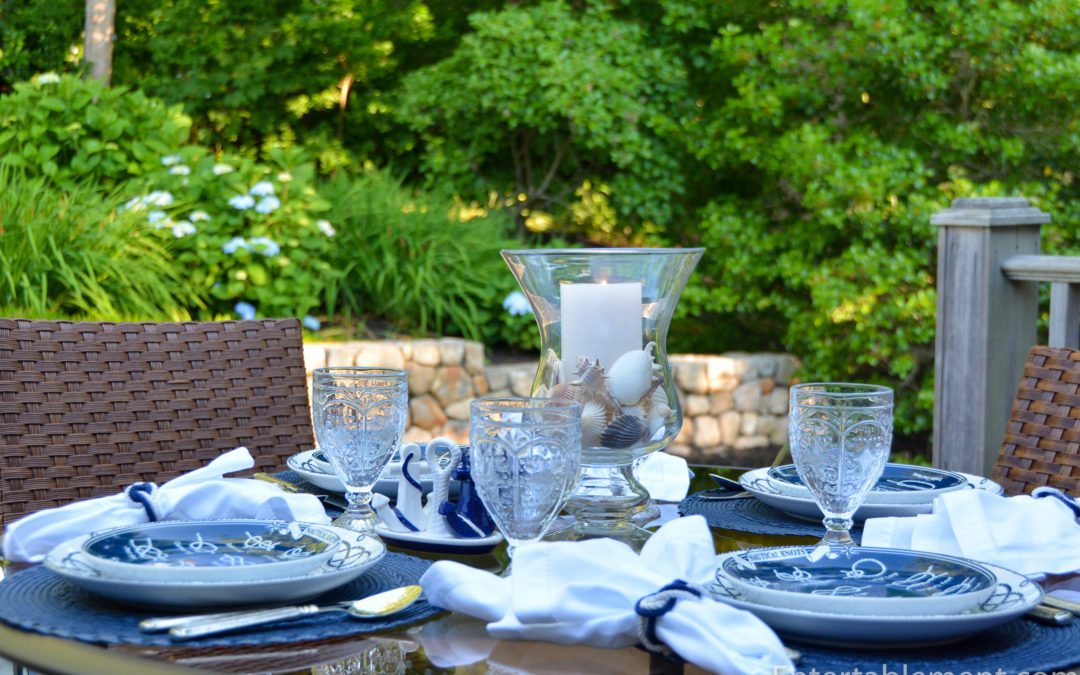 It’s high summer, and time to pull out the navy and white. 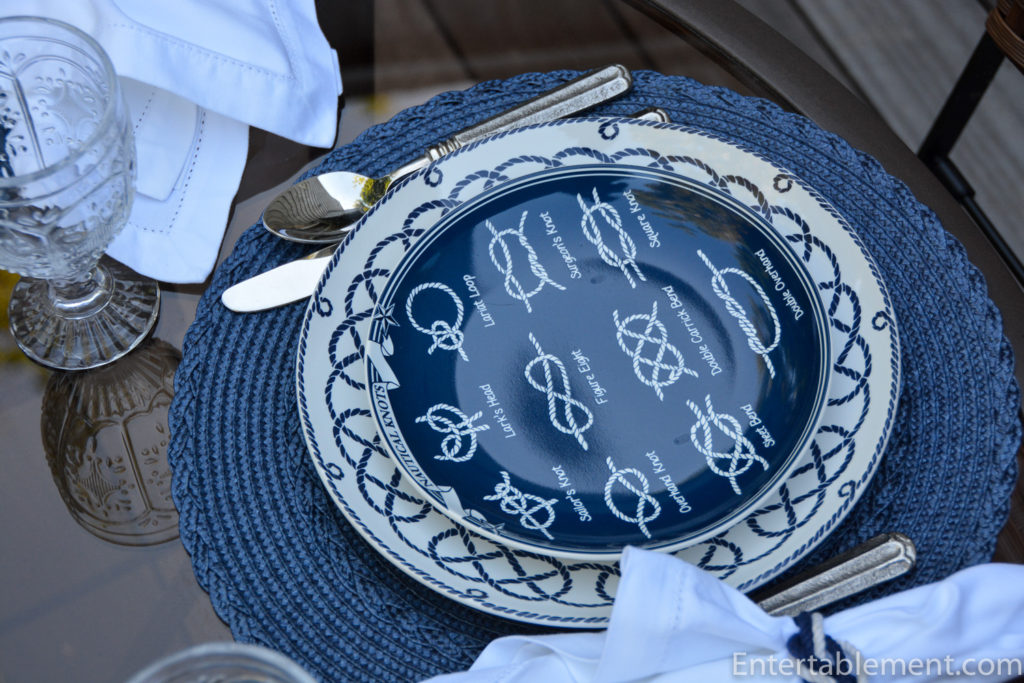 There is no more classic combination and for good reason. It’s jaunty and fun, while also managing to be chic and sophisticated. Quite a combination! 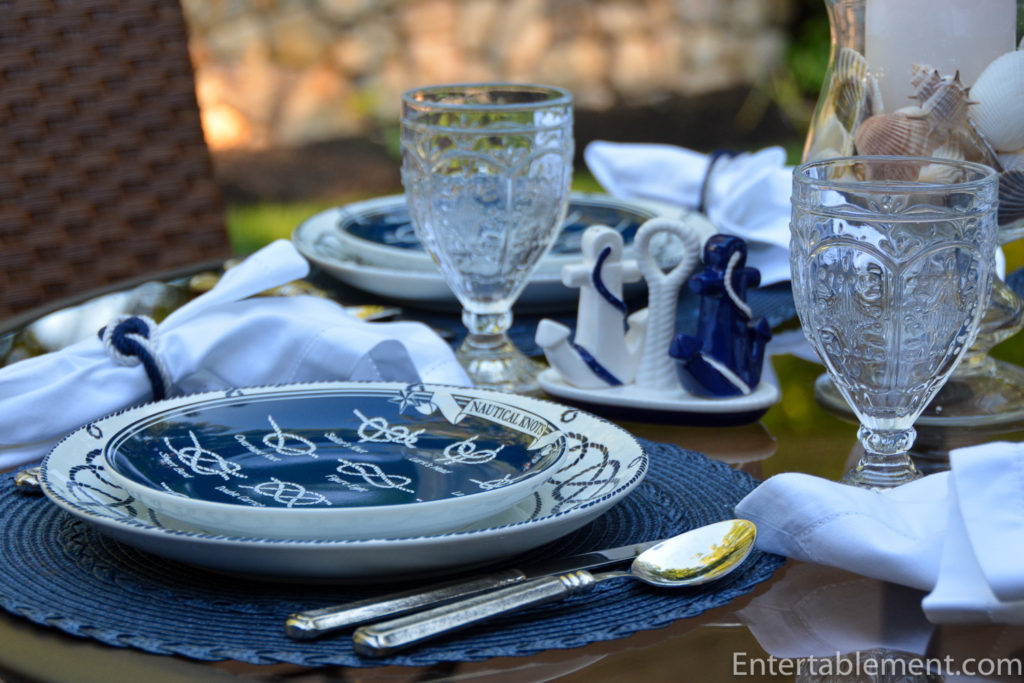 The two patterns are by 222 Fifth. The dinner plate is  Nexus Sailor’s Knot. 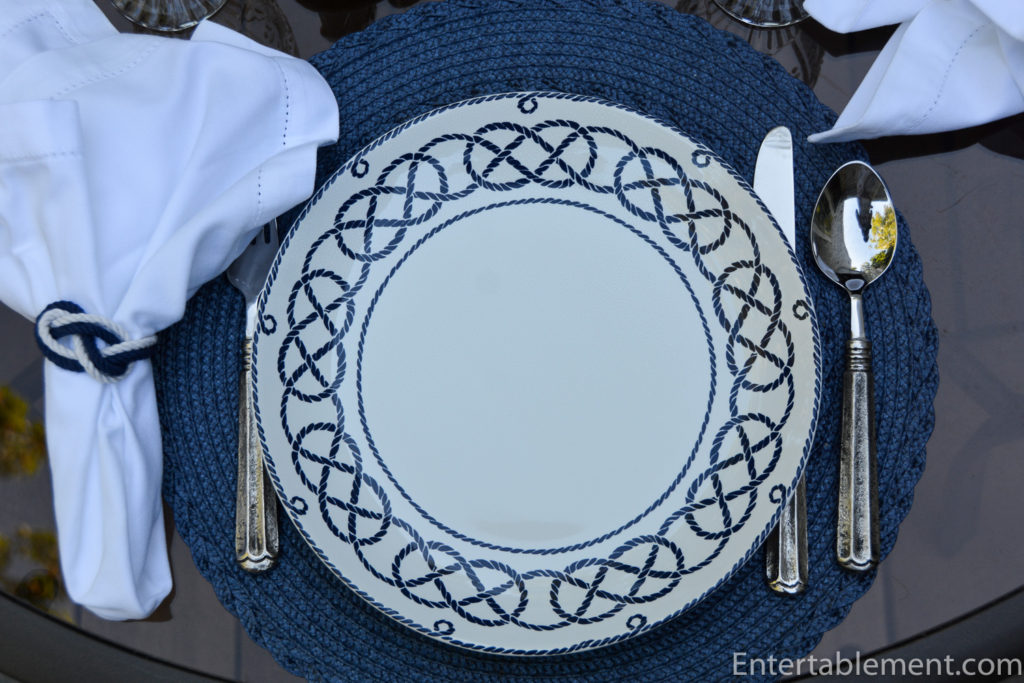 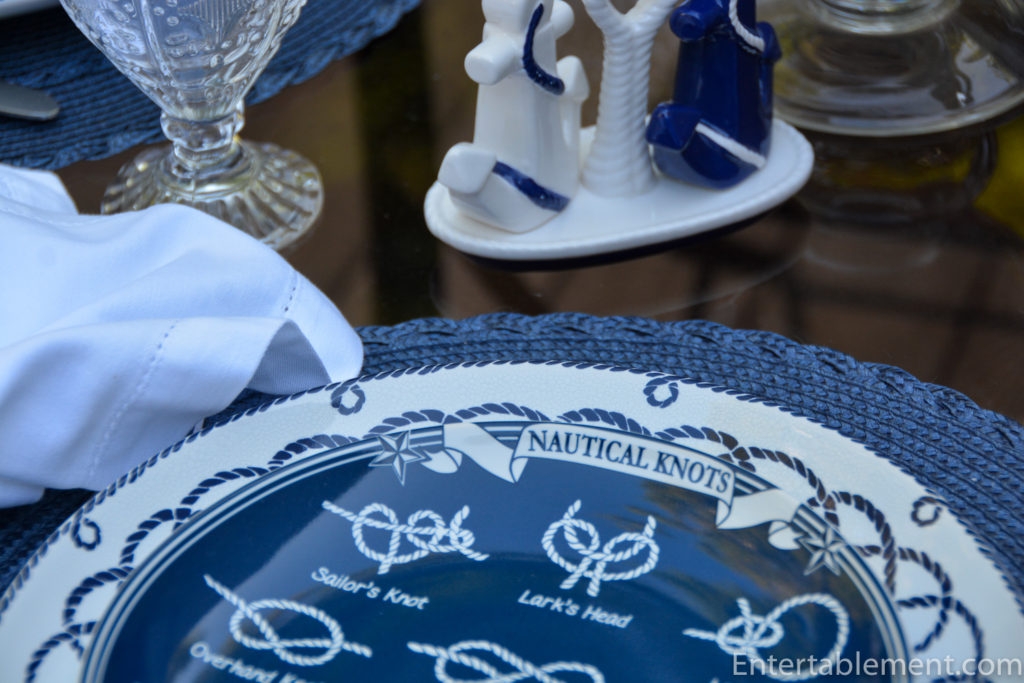 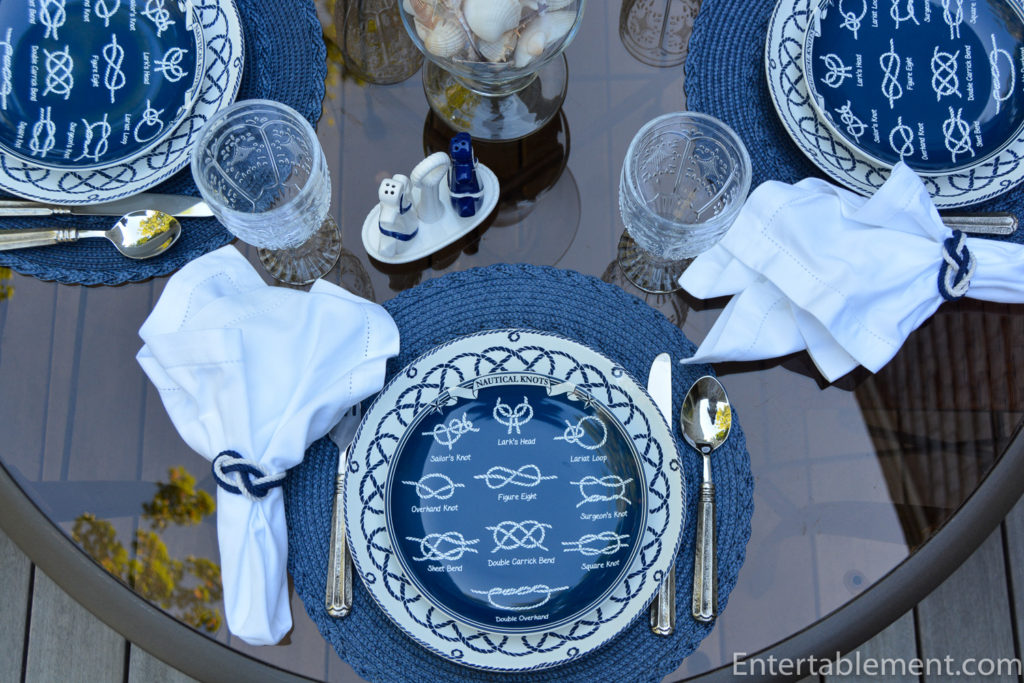 Of course, we just HAD to go with knotty napkin rings just to tie things together. (groan) 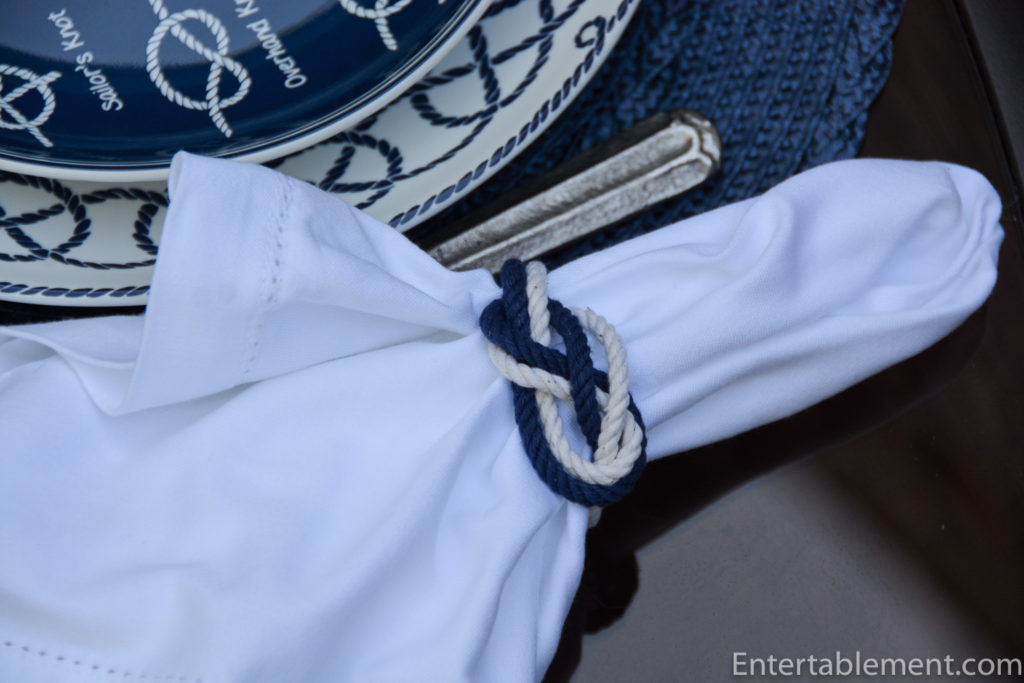 I took these photos last summer, and you’ll notice the garden along the bottom of the wall is still bare. 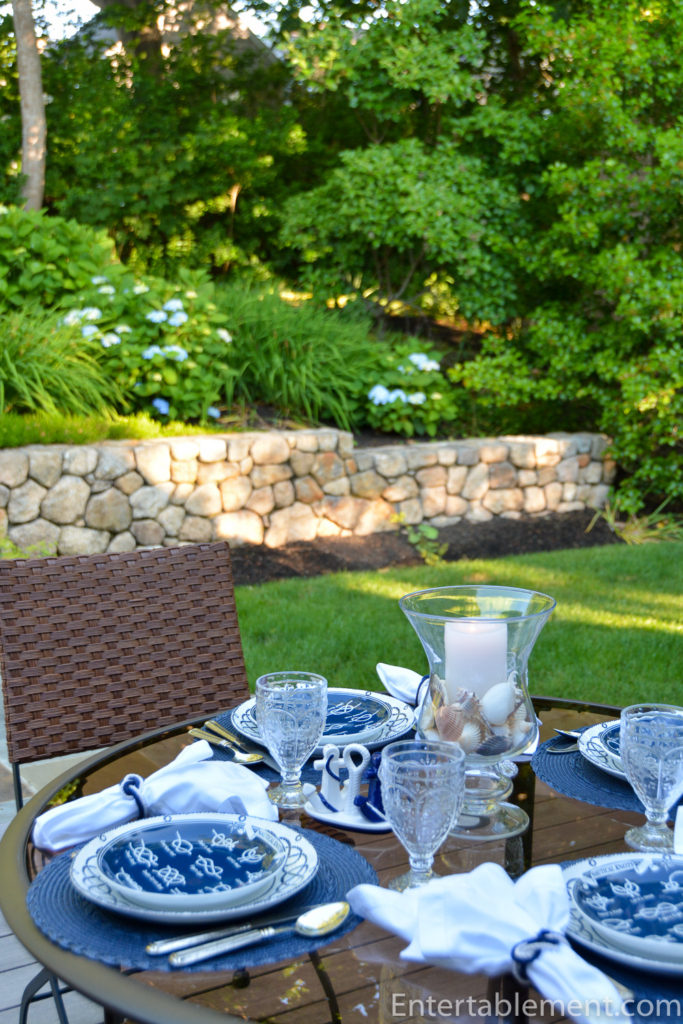 We did a whole bunch of planting earlier this year, including this bed. It’s blooming like crazy now. The very wet spring was heavenly for the plants – not so much for the beginning-to-rust humans, though. 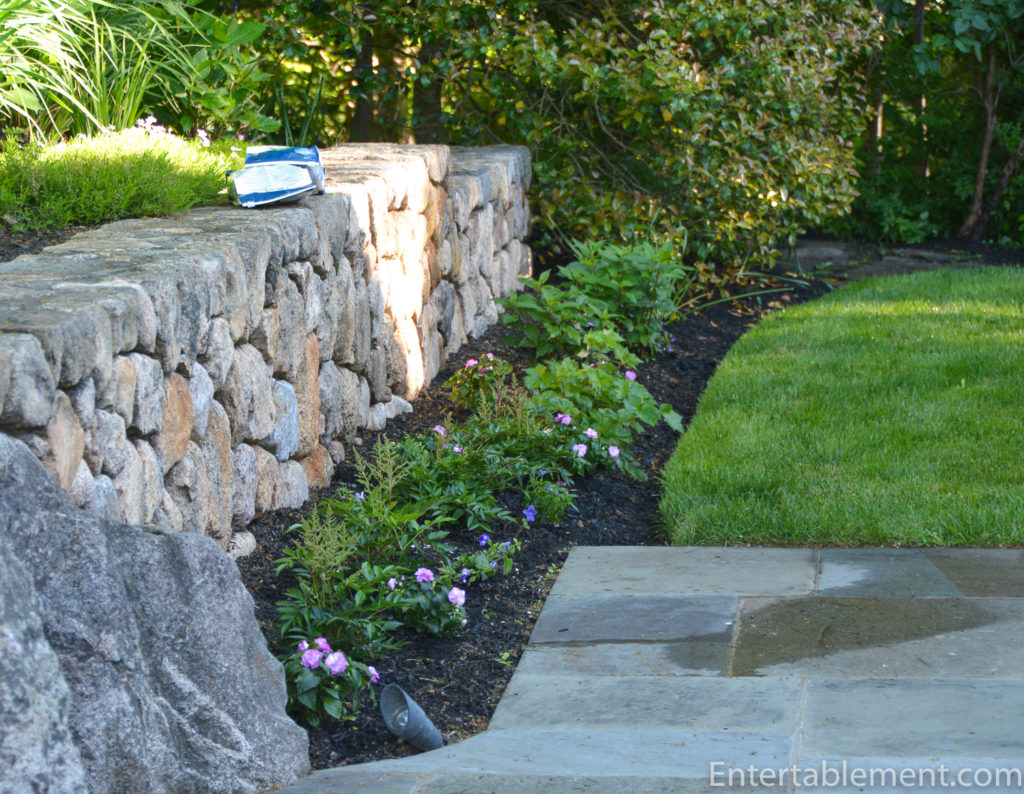 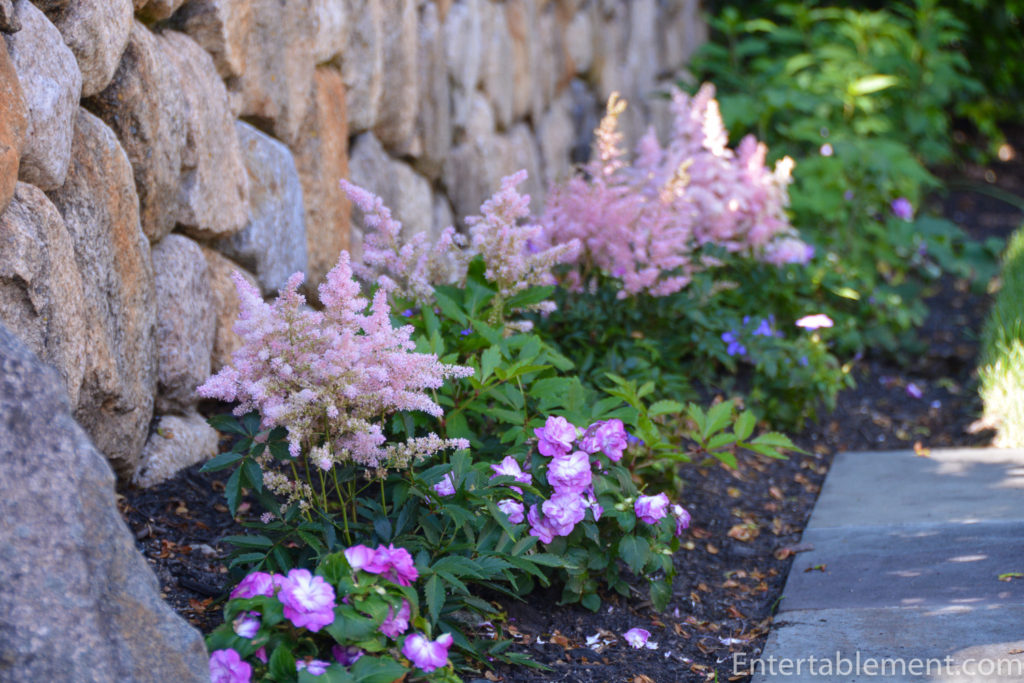 But it’s turned hot now. Good grief, what a change. Let’s enjoy it while it lasts – summer will be over before we’ve set sail. 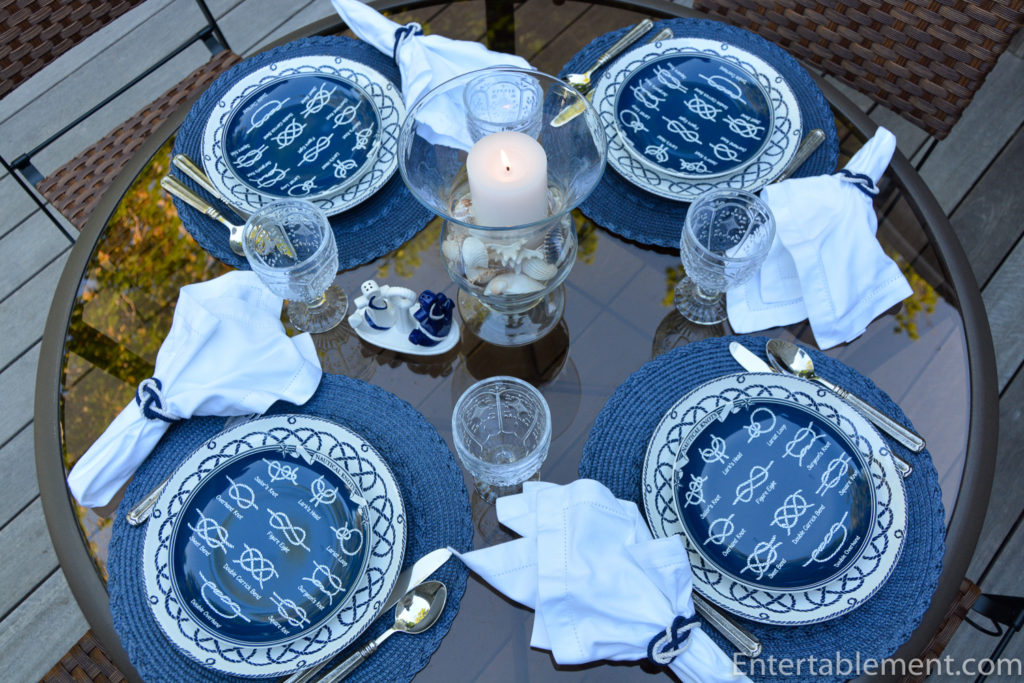 Fitz and Floyd clear Trestle glasses added some texture to the table, without any colour, as was fitting. I do love those vintage looking glasses. I just noticed that they’ve added a few new colours including smoke and blush, and wasn’t aware they also offered red. Fitzandfloyd.com is having quite a sale on the entire pattern right now and Bed, Bath & Beyond have all but the red at their usual good prices. 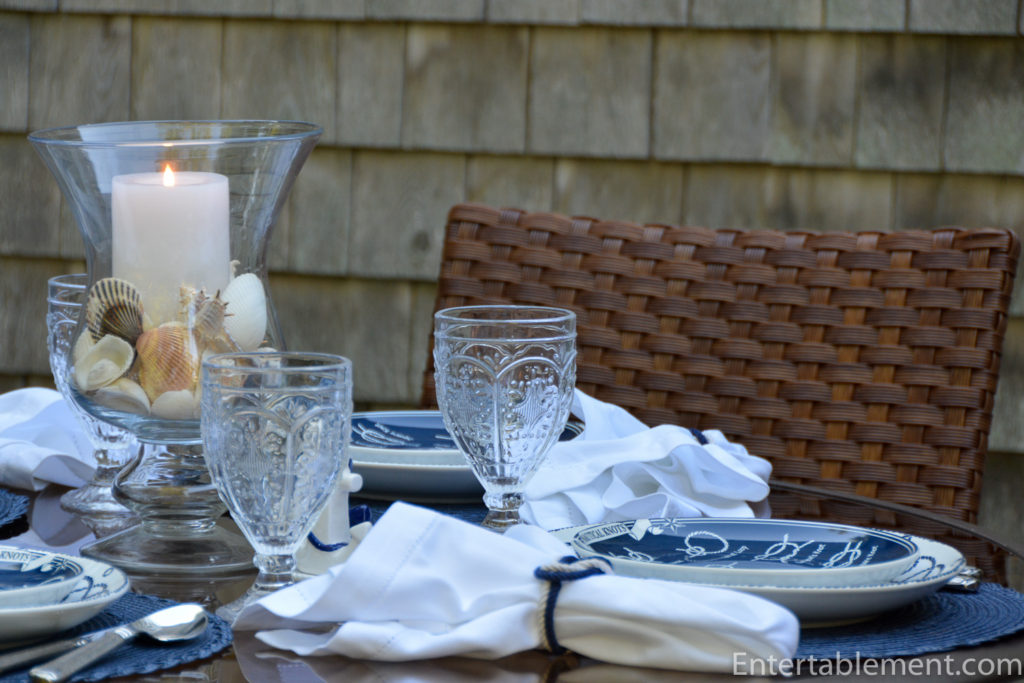 They’re such a nice, hefty glass without being clunky, somehow. 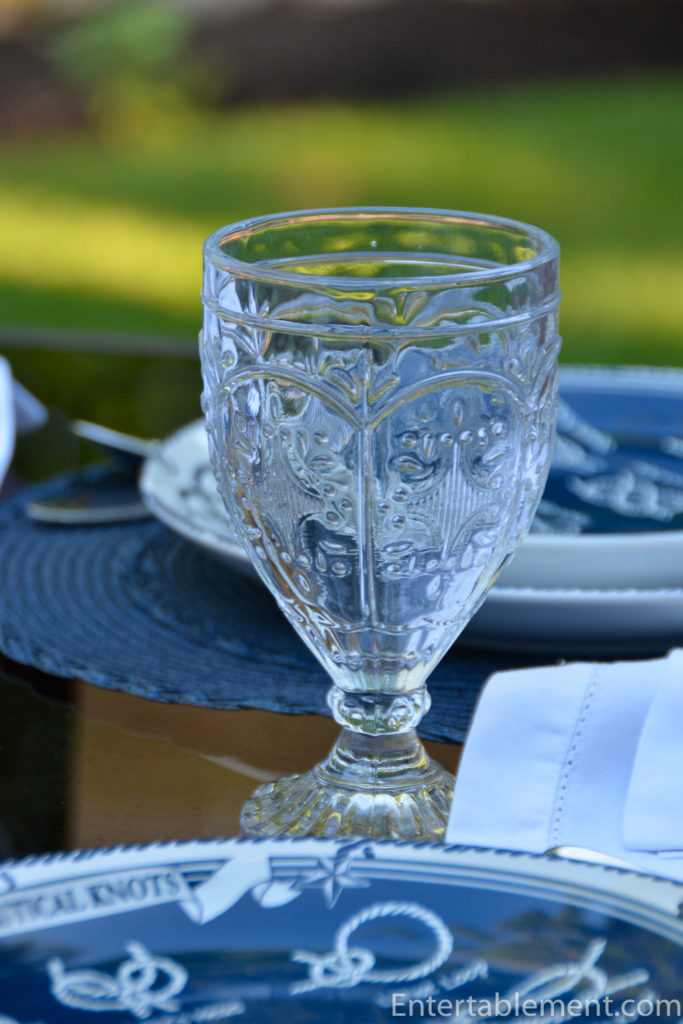 I went with a simple hurricane with a candle and shells. The table didn’t seem to need anything further. 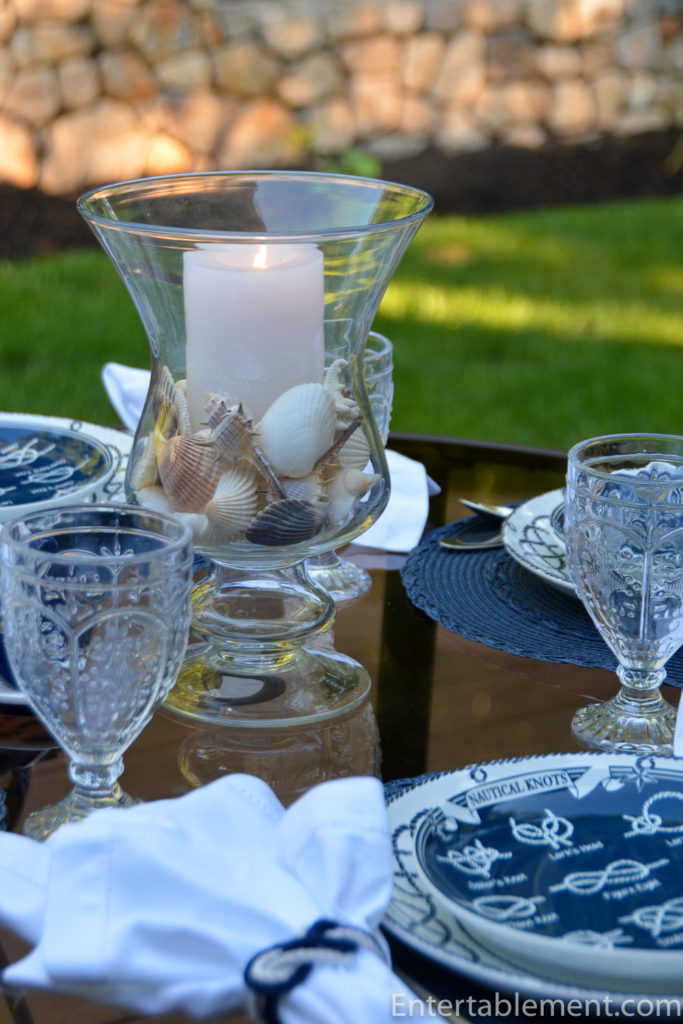 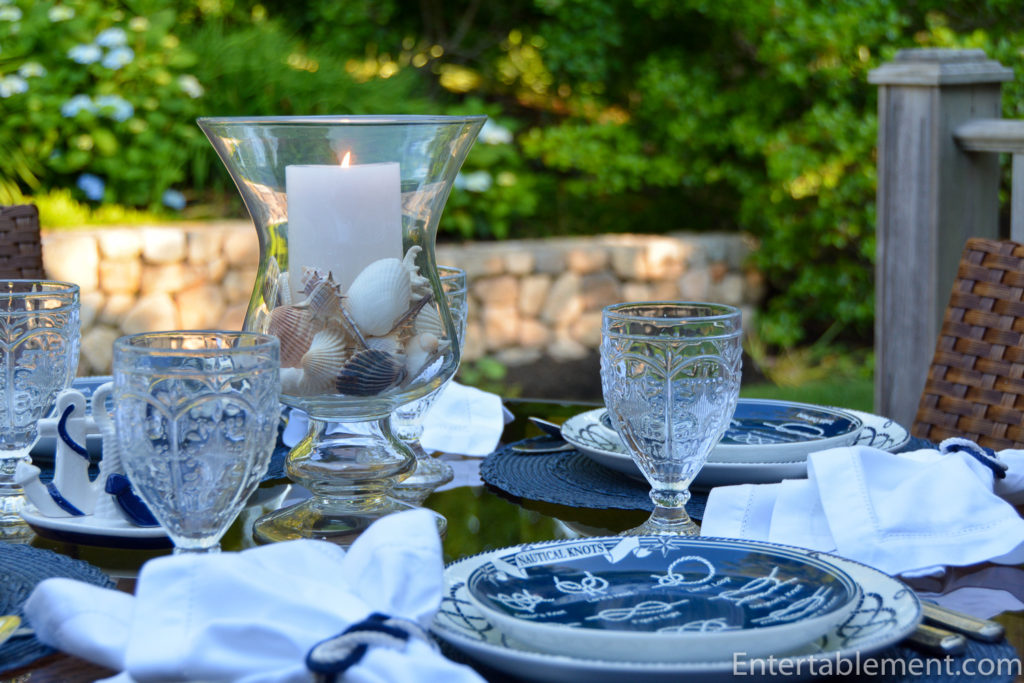 Oh, and the anchor salt & pepper. Of course. Available at Amazon, though Party Swizzle has them slightly cheaper. 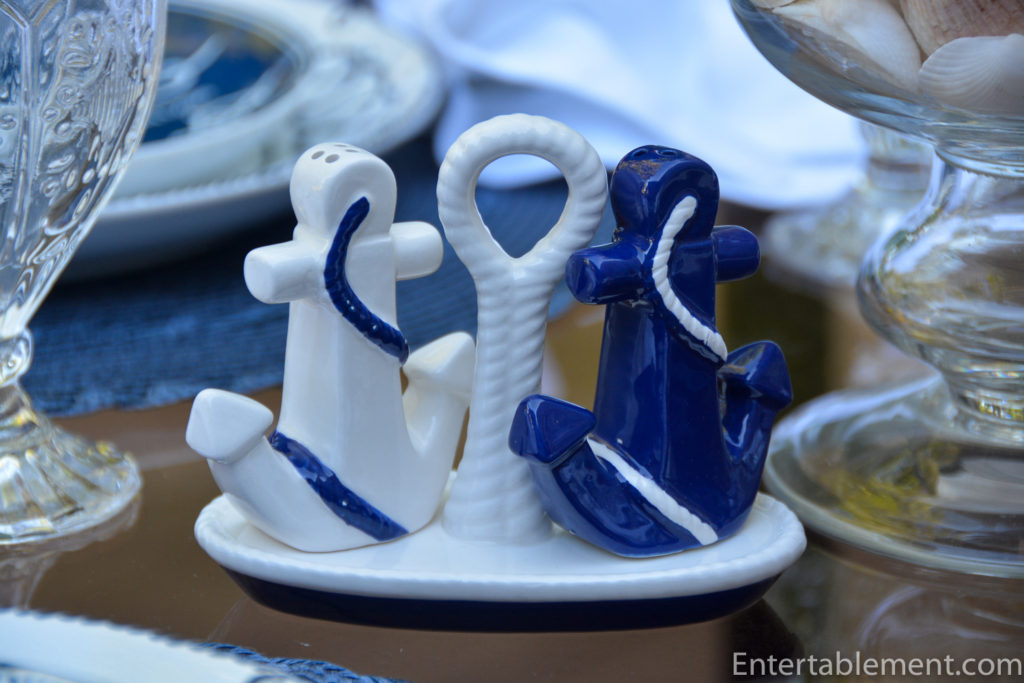 Always dangerous when I start looking at sources for blog posts. I hadn’t noticed these nautical sets before, both listed at Houzz.  They’d have been really cute, too. 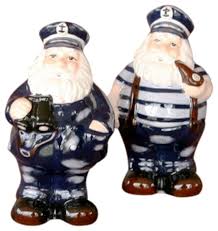 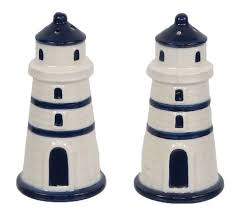 But we have the anchors, and they tie in very well. 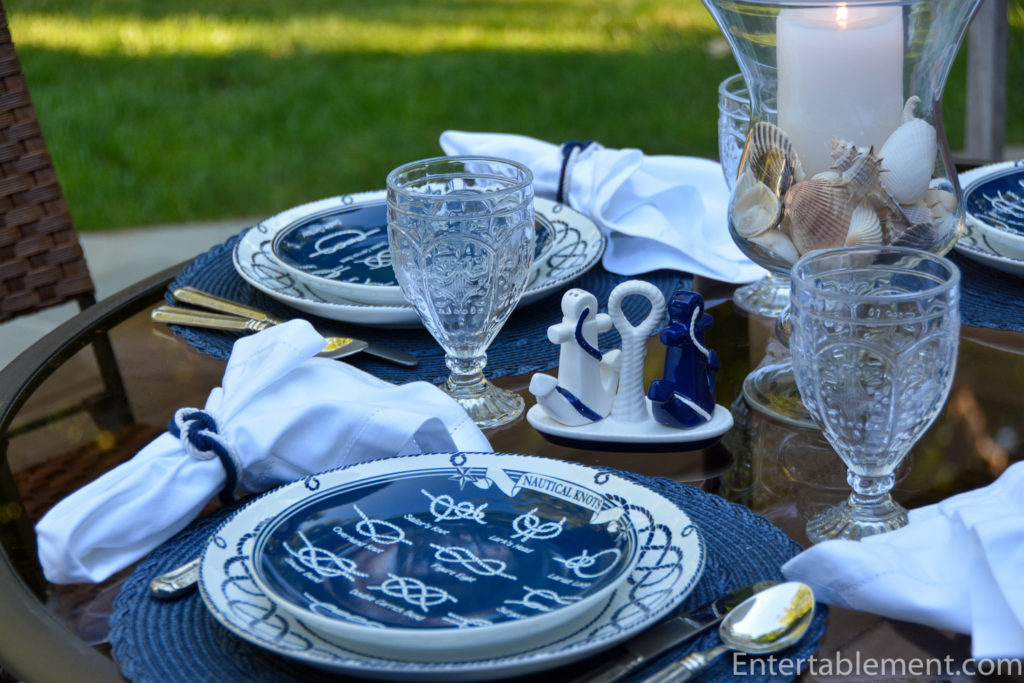 So many knots! I’m not a sailor, and most of these are unfamiliar to me, but it looks like the pattern around the edge of the dinner plate is Double Carrick Bend. 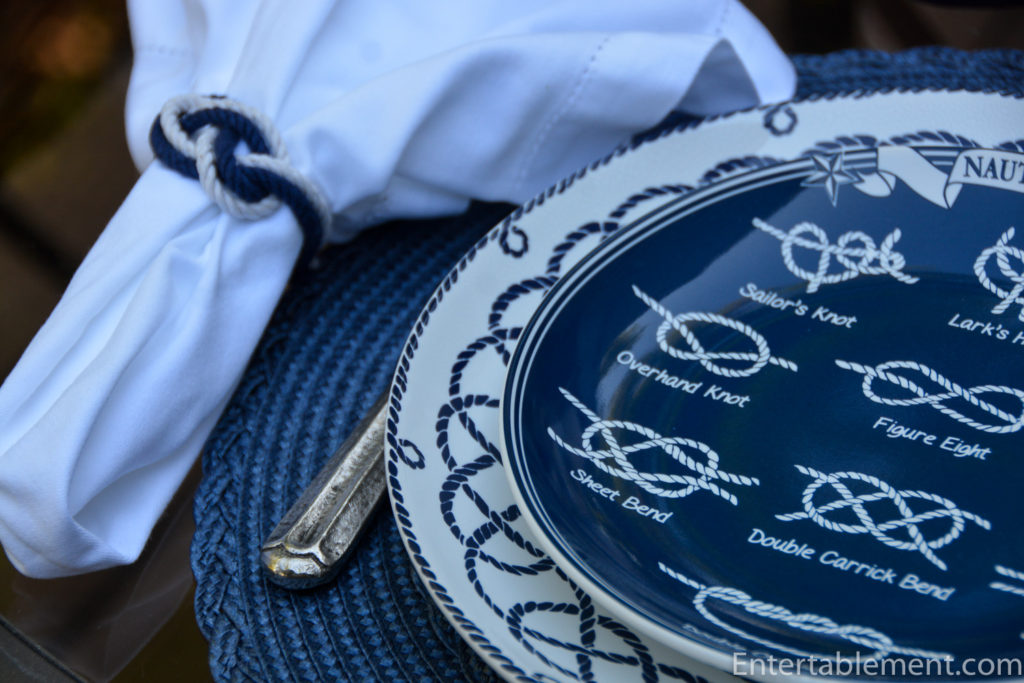 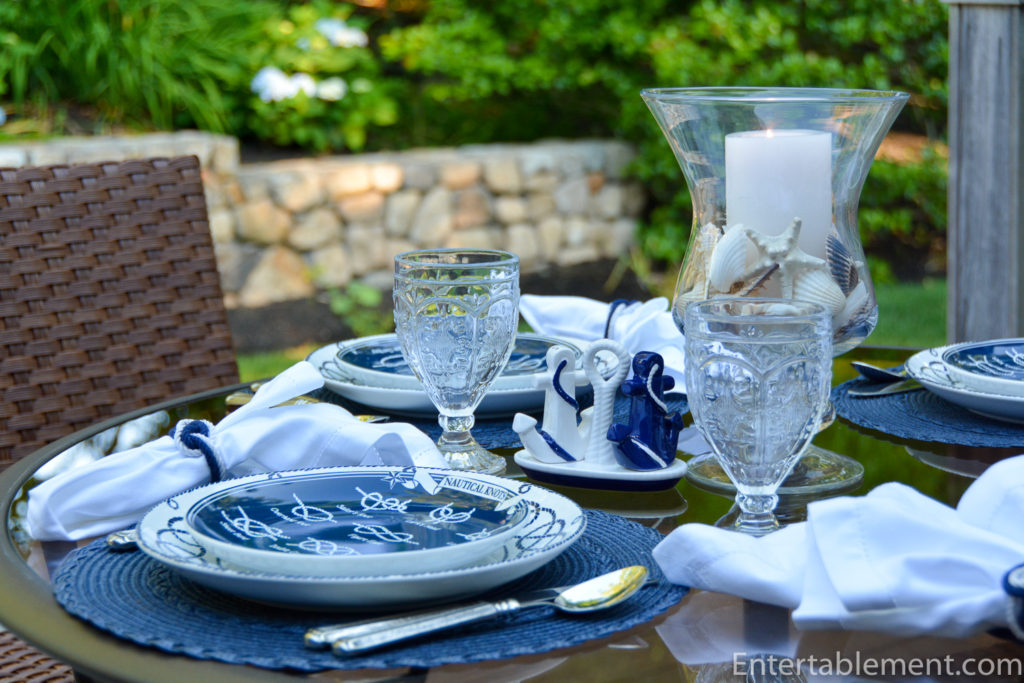 The cutlery is my old standby – Danieli from World Market. 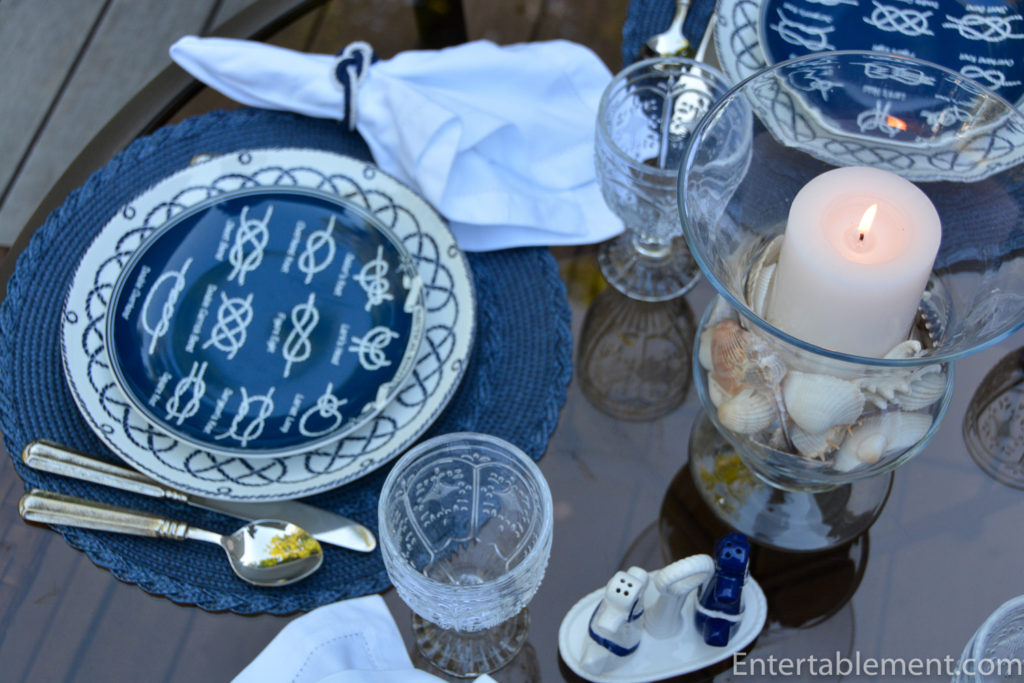 Time to weigh anchor and start the day. The dogs are restless and anxious for their walk, which we try to do early in the day before it gets too hot. It’s been the super-low tide early in the morning this week, and the two younger dogs have had the time of their lives cavorting in the surf. We’ve been able to let them dry out on the back patio while we have breakfast, which minimizes the sand tracked into the house. You cannot have a beach, golden retrievers and no sand in the house (I tell myself as I crunch over the floors).

Here are some shots of Taylor and Burton when they were younger; they’re a bit frail for that carrying on now, but they sure enjoyed it in their day. 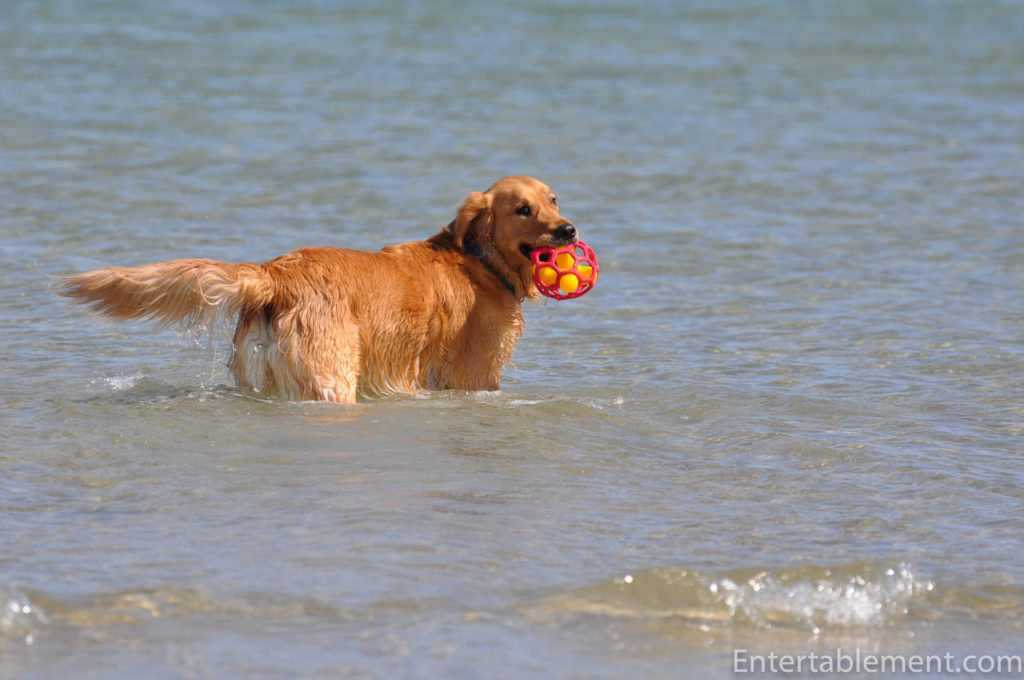 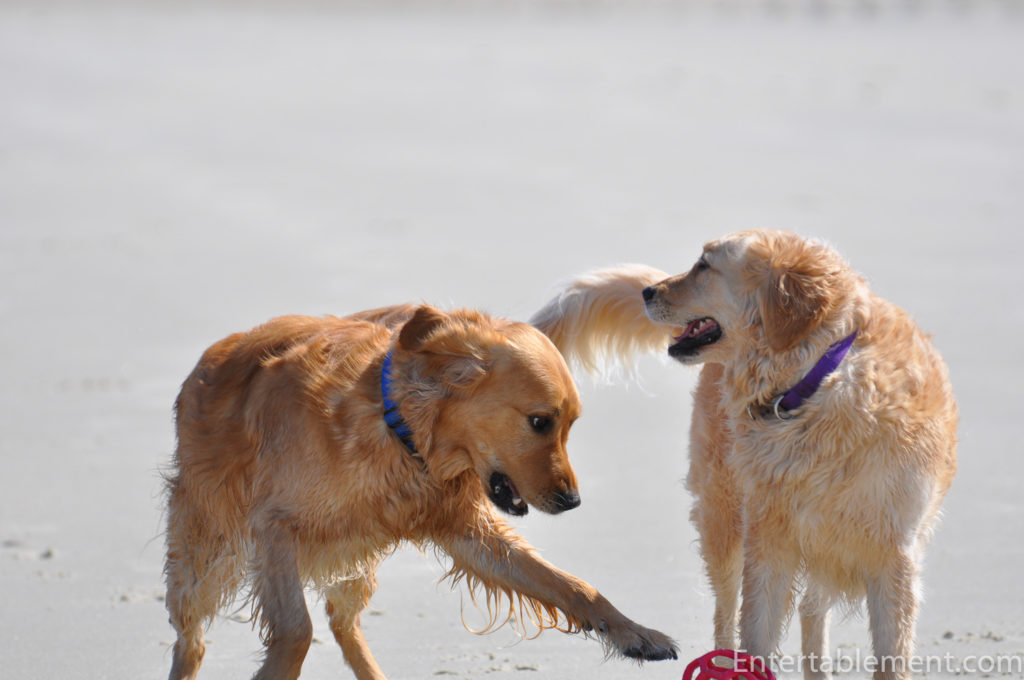 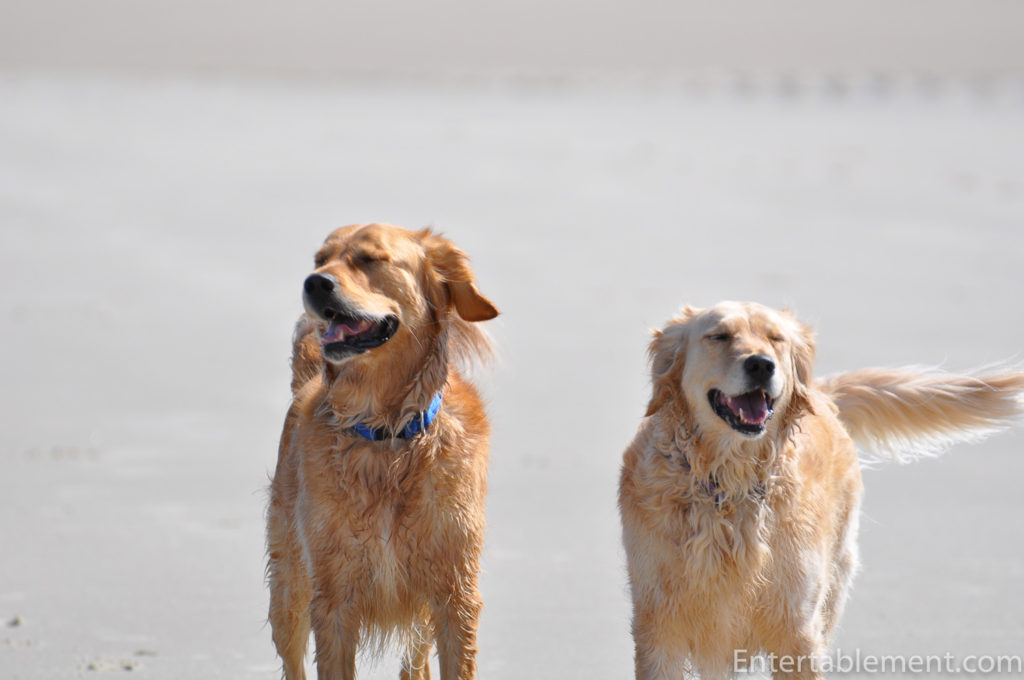 I’ll leave you back at the Nautical Table. 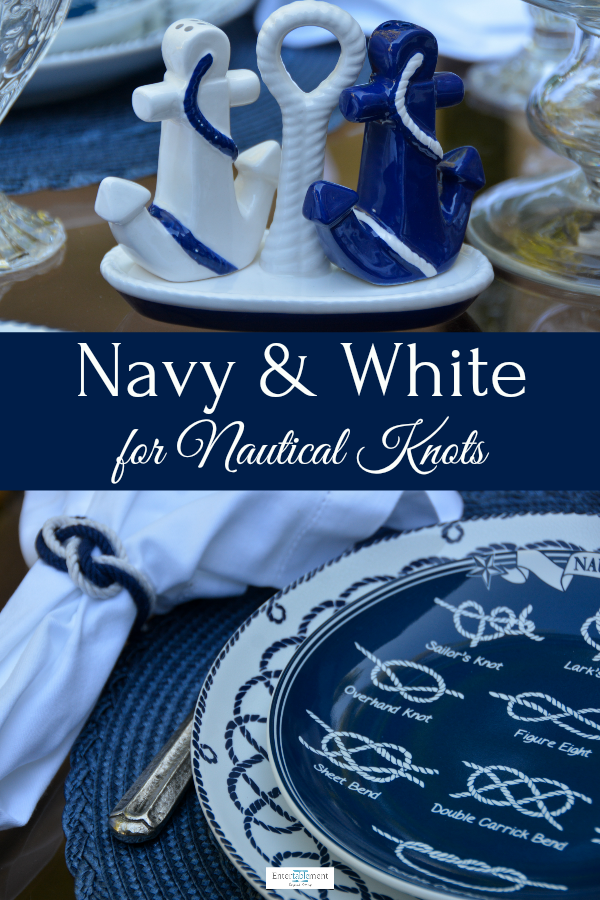 Enjoy the rest of the weekend, everyone. I hope you had a lovely 4th of July.  I’m sharing this post with Between Naps on the Porch.