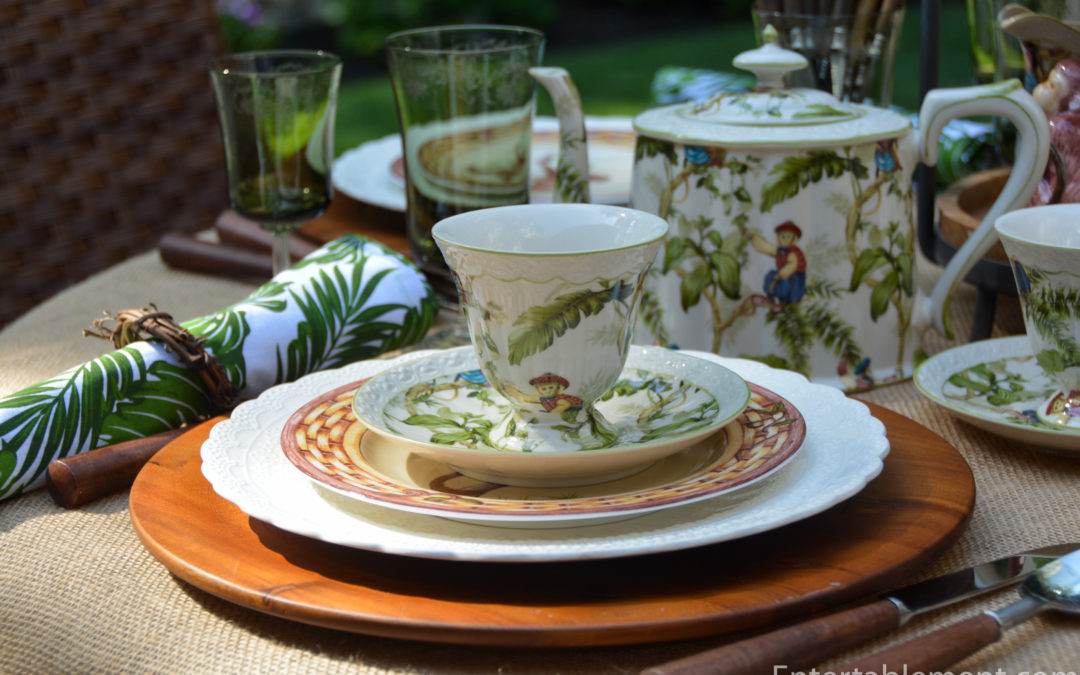 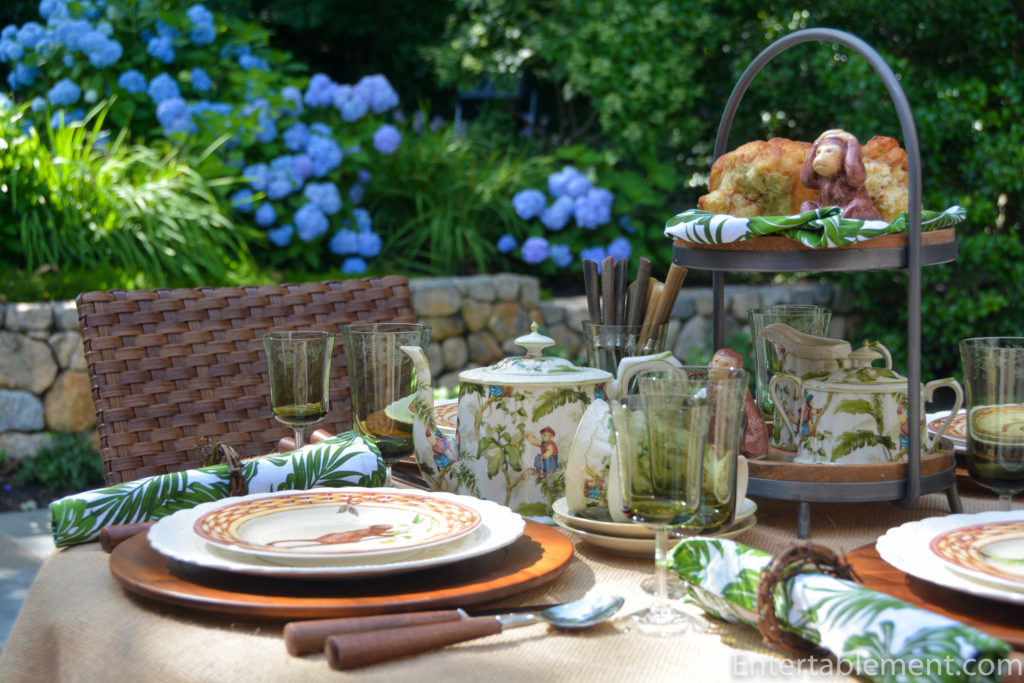 This table sprang from a combination of patterns comprising Monkey by American Atelier and a tea set from Maryland China. 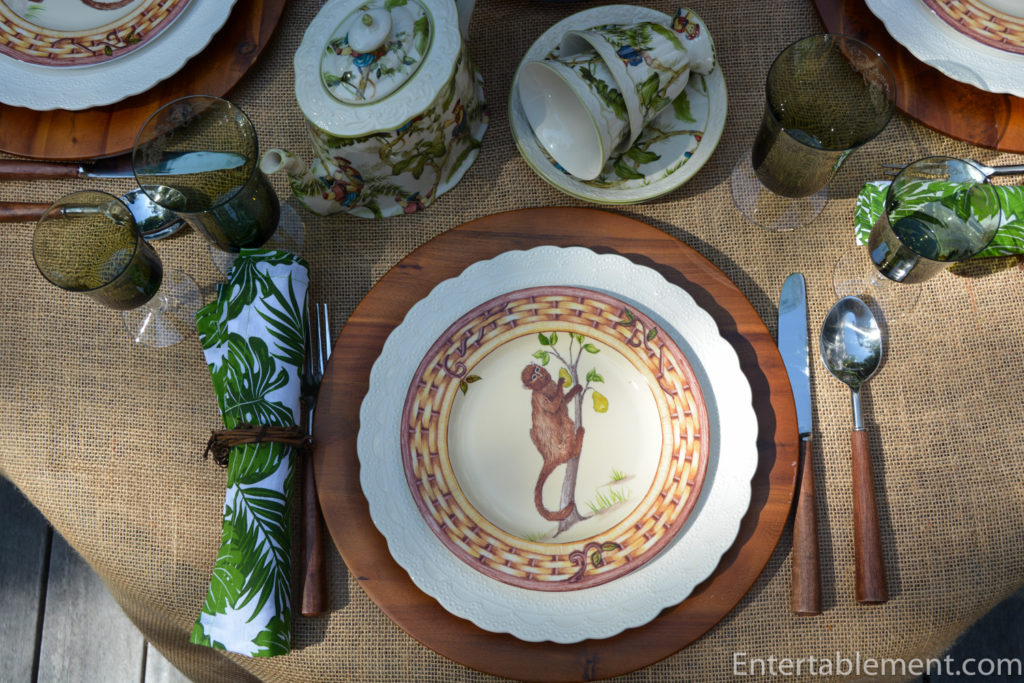 Oh – and Spode Jewel as the dinner plate. 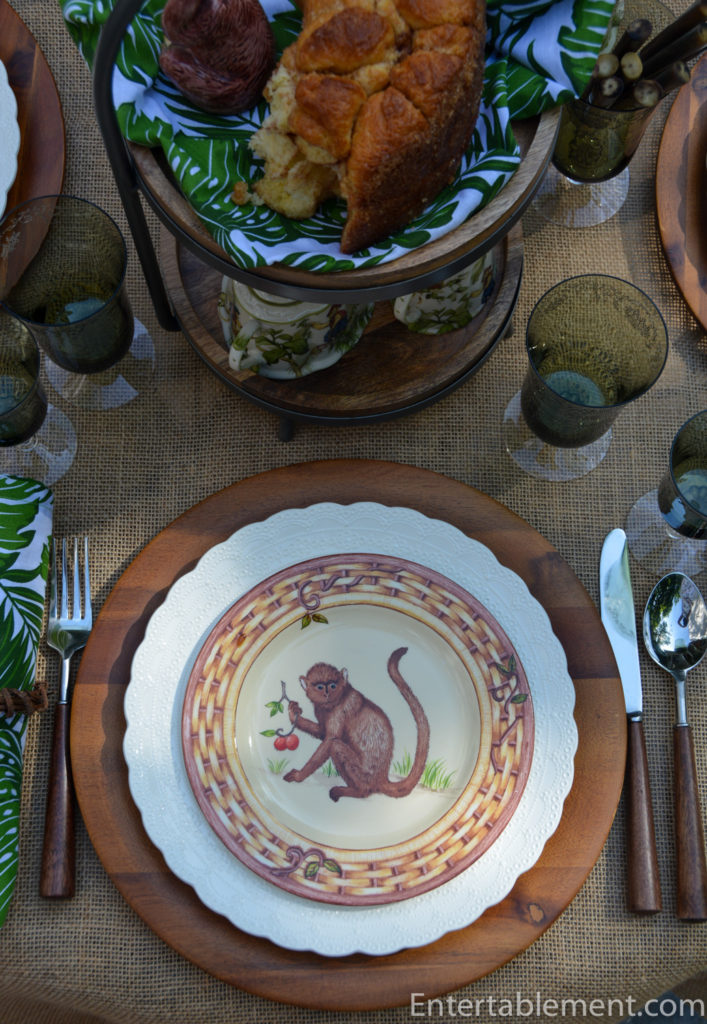 The napkins featuring palm fronds were from Pier 1 earlier this year, but now gone. The flatware (now discontinued) was from World Market, and I’ve used my trusty Acacia Wood Chargers from Amazon to complete the natural/jungle theme. 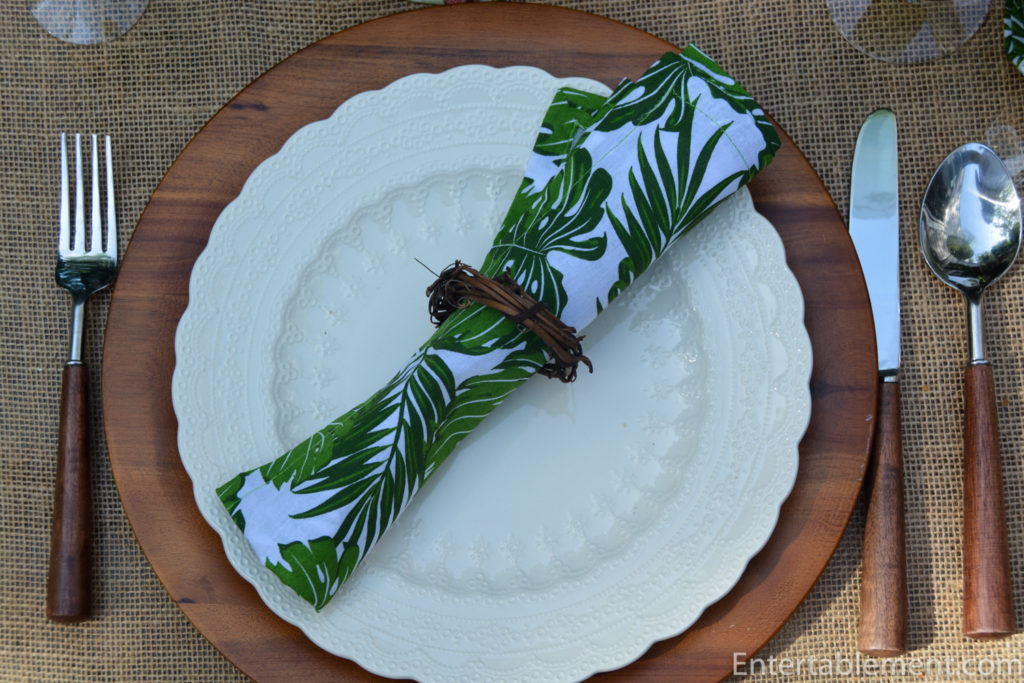 The playful monkeys on the American Atelier salad plates reminded me of the beloved series of Curious George books, written by Hans and Margret Rey, a Jewish couple living in Paris who escaped the Nazis in June, 1940. 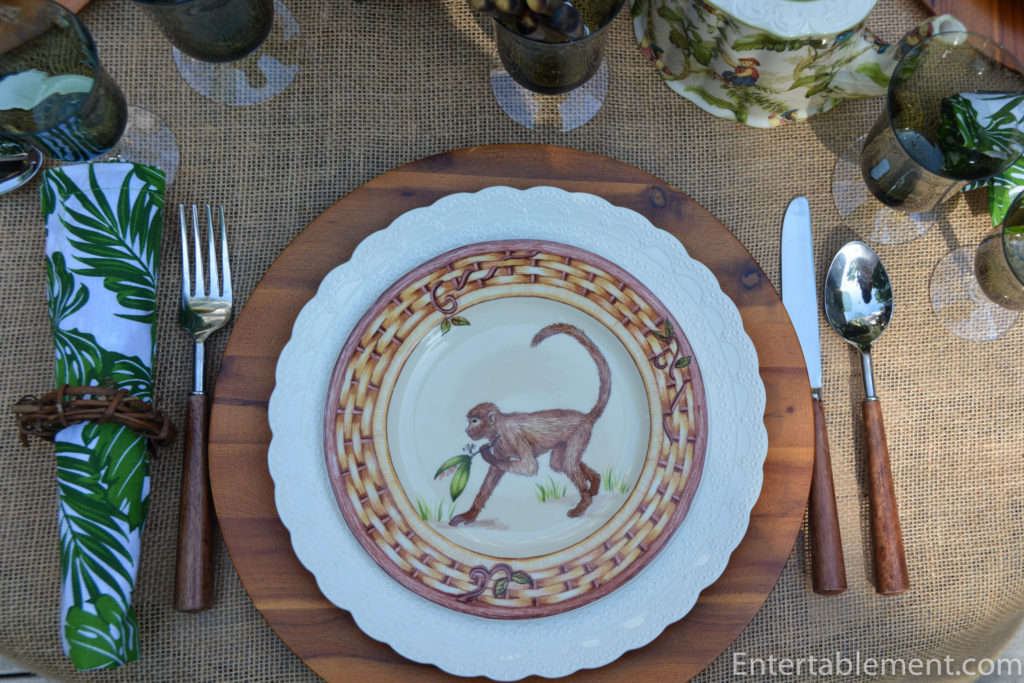 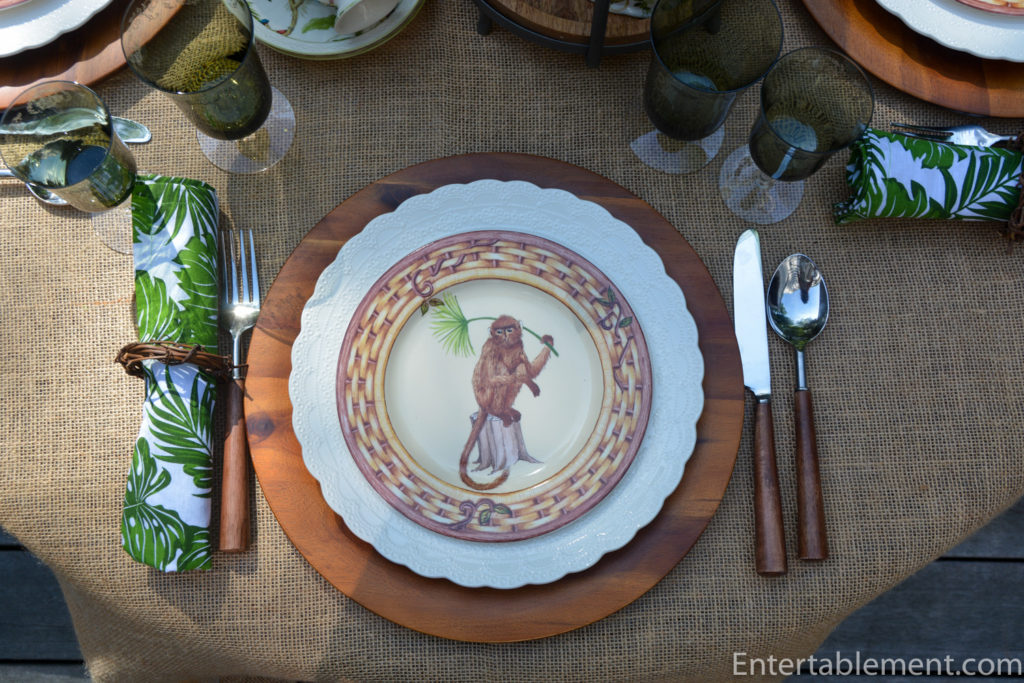 The few possession they managed to take with them included a package of drawings about a curious monkey. 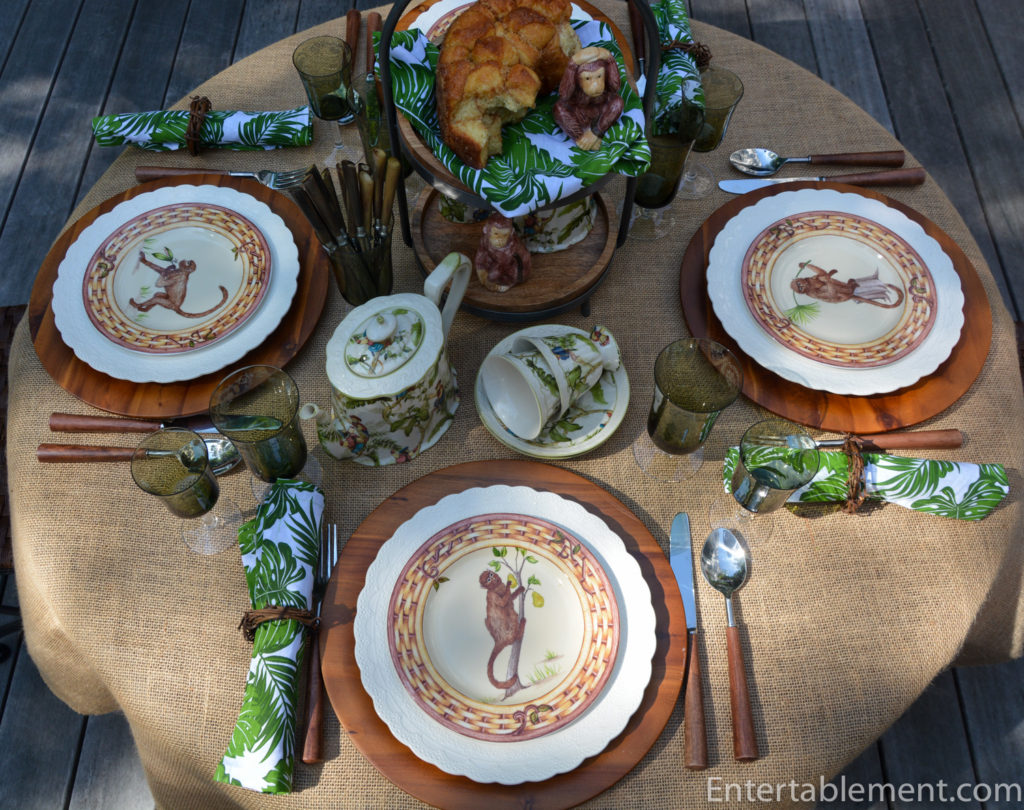 My favourite of the stories is Curious George Takes A Job. Wikipedia does a great job describing the plot:

“The book picks up where the first book ends. George is living in the zoo, until he gets a key from a zookeeper and escapes his cage. In the city, George enters a restaurant where he is caught eating a pot of spaghetti and forced by the cook to wash the dishes, but he does a splendid job. As a reward, the cook takes him to a friend (who is an elevator man), who gives him a job as a window washer at a tall apartment building. George washes the windows. He first saw a little boy crying because he refused to eat his spinach (for the first room), and then a man was taking a nap (for the second). Then, now for a third room, he discovers a room being painted. George then thinks painting is better than washing windows. 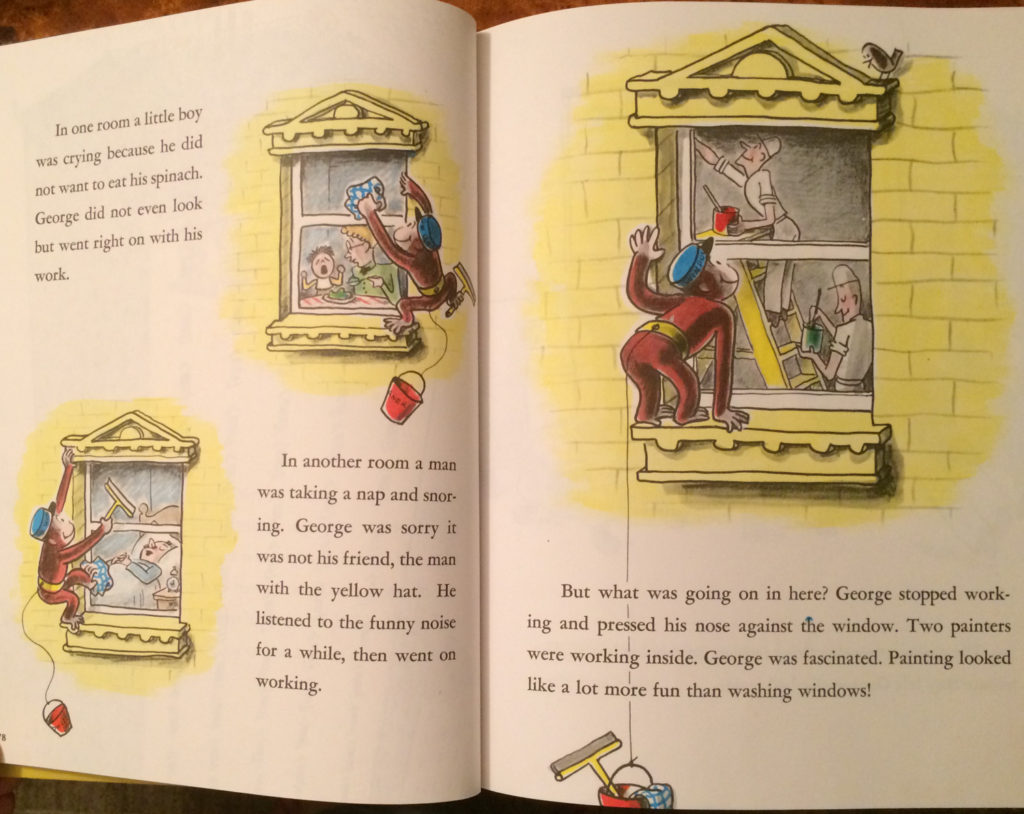 So he sneaks in … 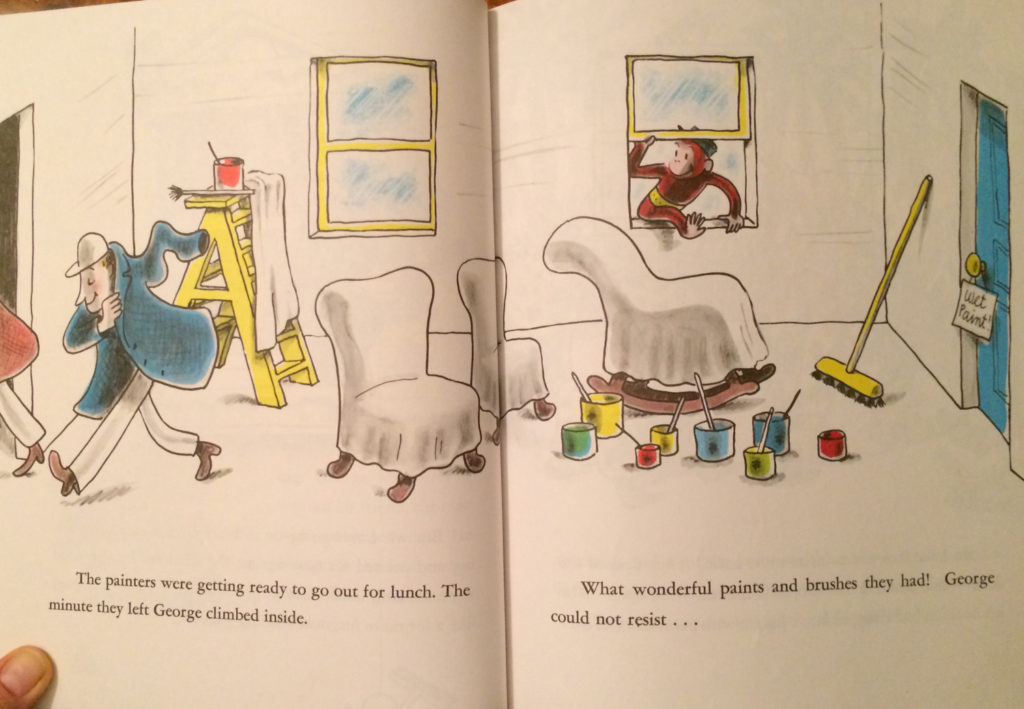 …and gives it a jungle theme (even painting the furniture covers as animals) during the painters’ break for lunch. Upon their return from lunch an hour later, the painters look inside and the room has changed into a jungle (including a giraffe, two leopards, and a zebra).” 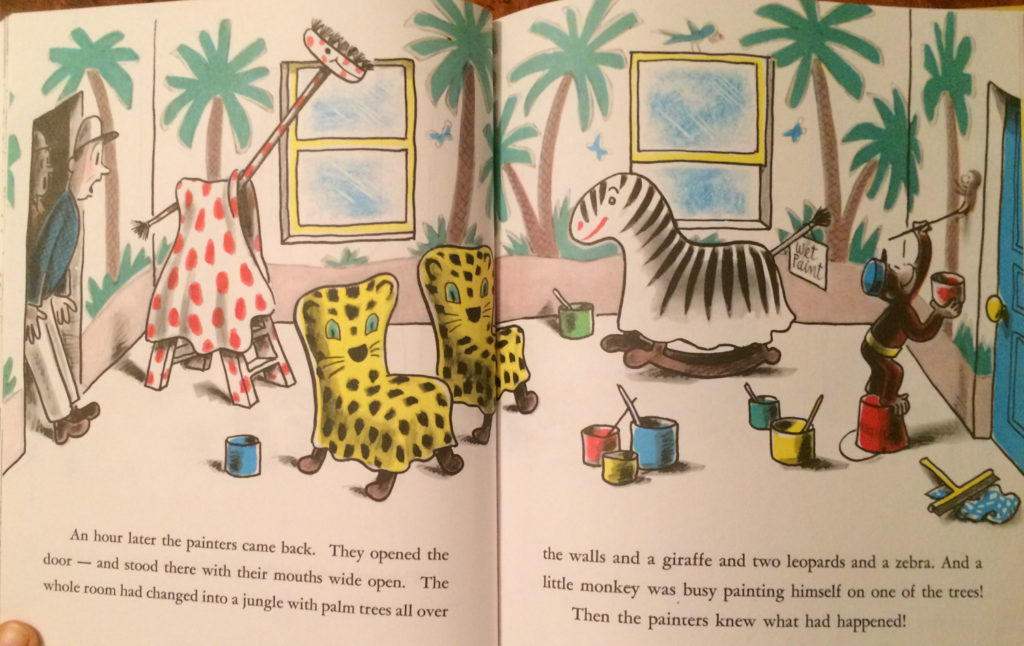 I won’t spoil the rest of the story – suffice to say that George escapes and goes on to have many more adventure with his friend, The Man With The Yellow Hat. When the first grandbaby was on the way, we chose Curious George as the theme for the nursery at our house, as it was both unisex and timeless. (Little did we know that five granddaughters would come along in rapid succession). Pottery Barn Kids had both a crib set and sheets/duvet cover for a big bed. I got it all at once, and the room has adapted nicely. The crib is down now, as even the youngest is in a big bed. All the little girls love Curious George! And so does Nana (obviously)! 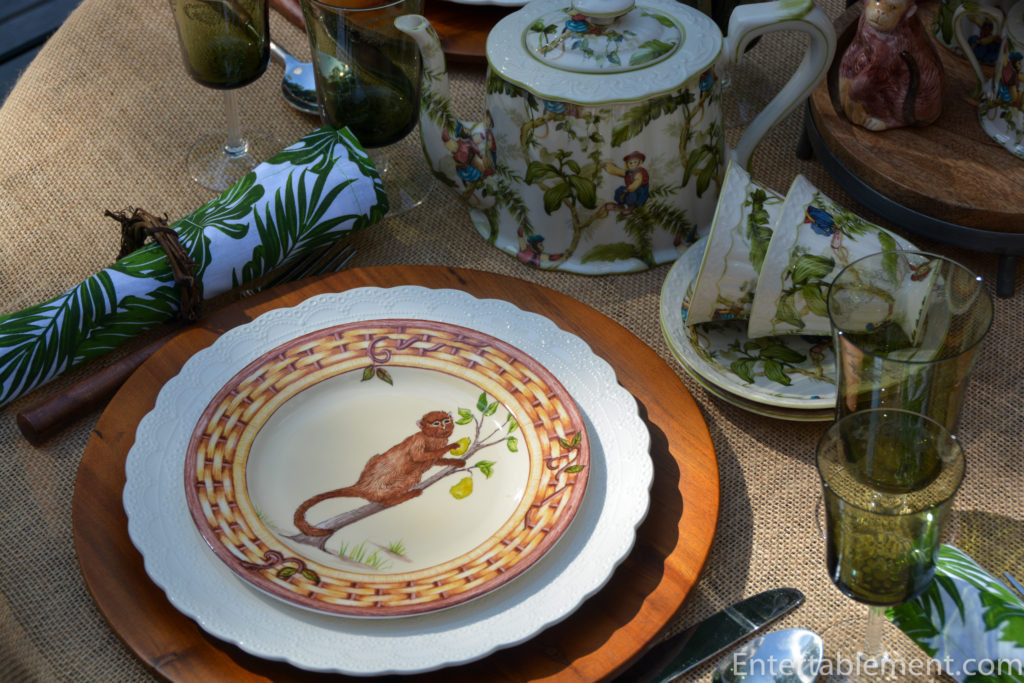 The monkey theme on the tea set by Maryland China is not quite as playful, but coordinates nicely. 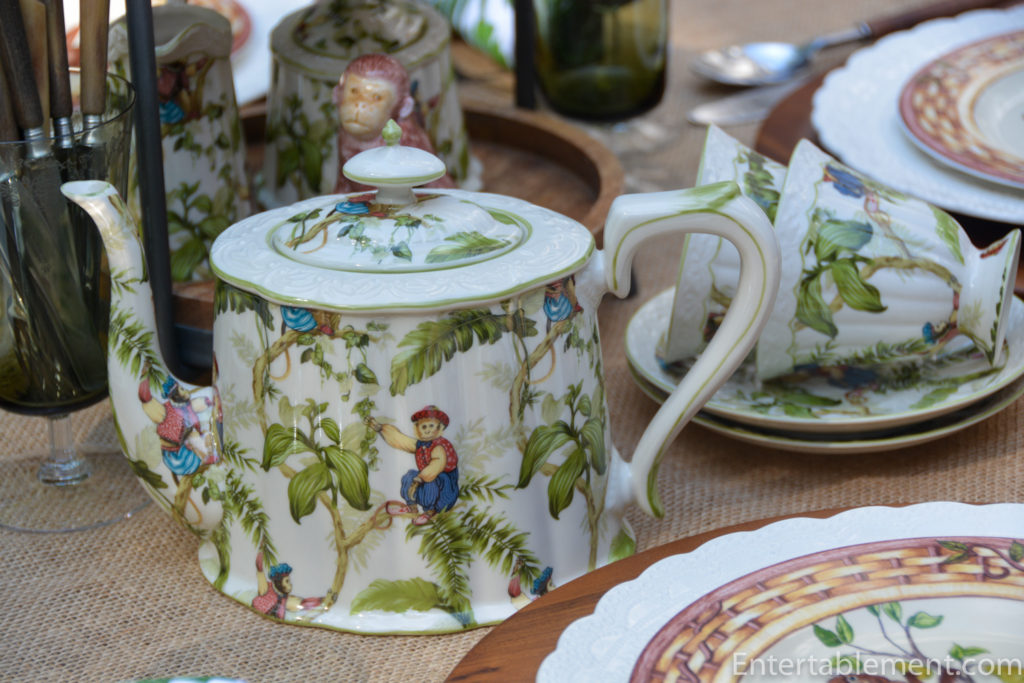 The set comprises a teapot, cream and sugar, and two cups and saucers. 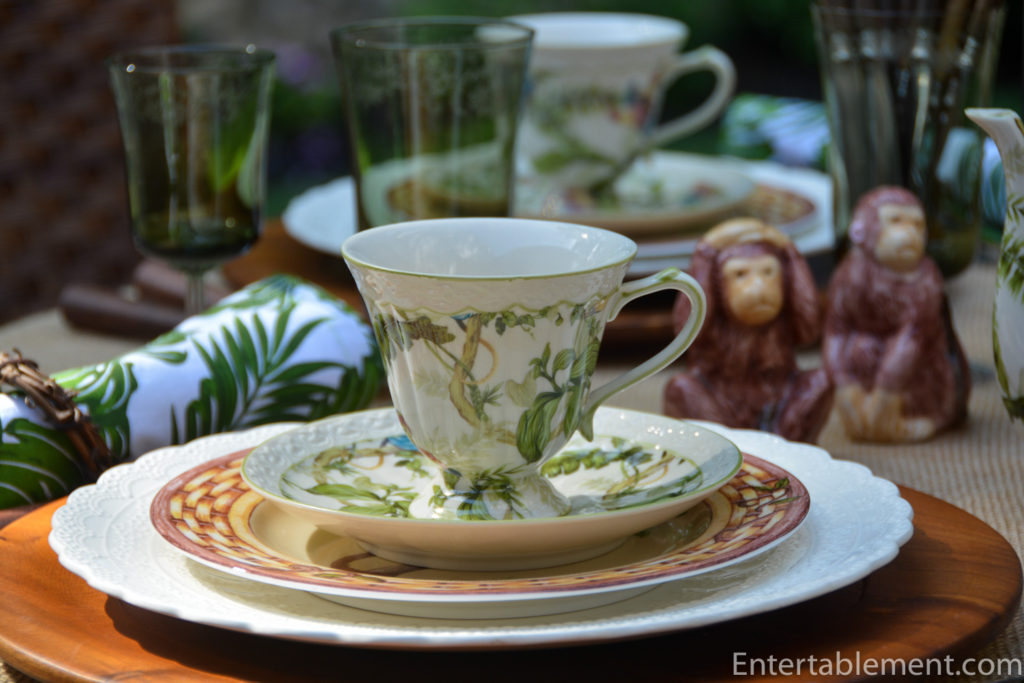 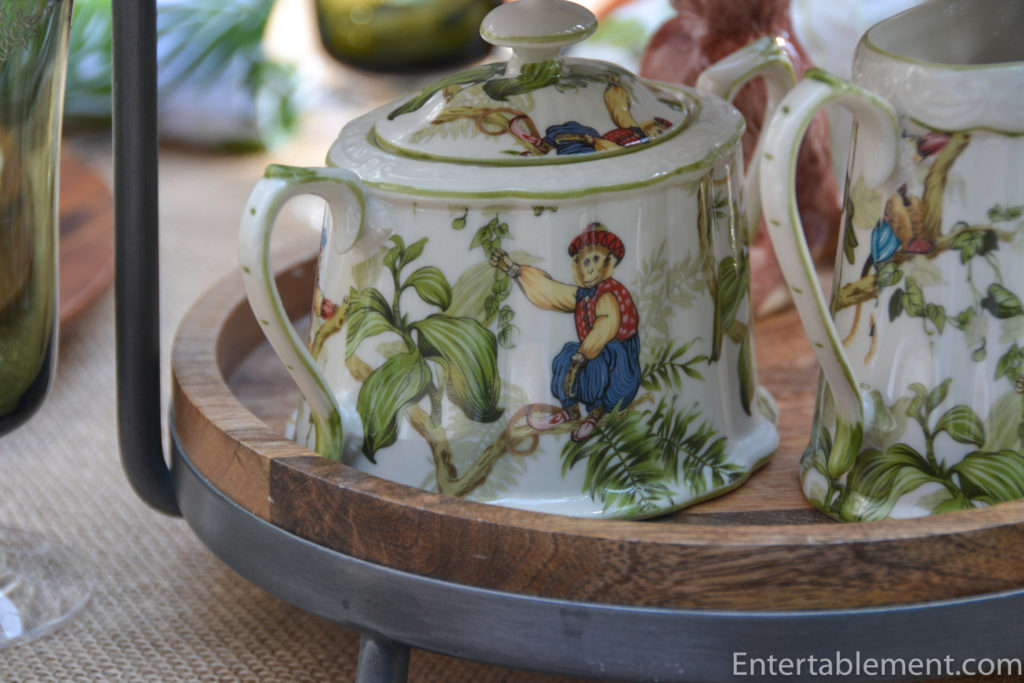 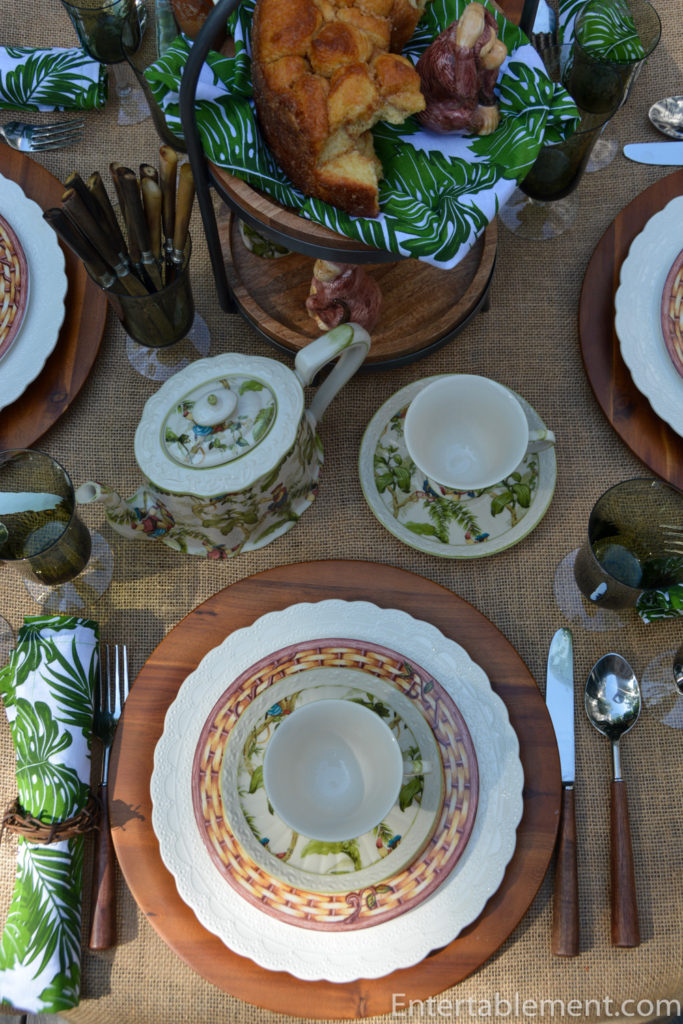 The pieces are nicely made, and I like the detail on the handle of the teapot. 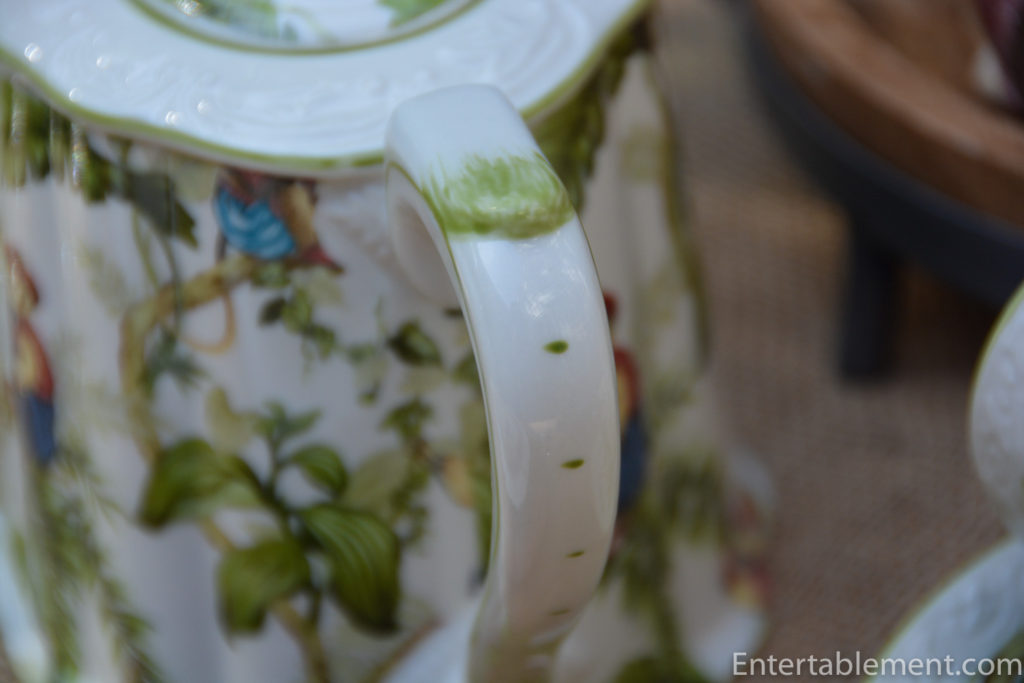 If we are going to have a tea set, we must have something to nosh on. 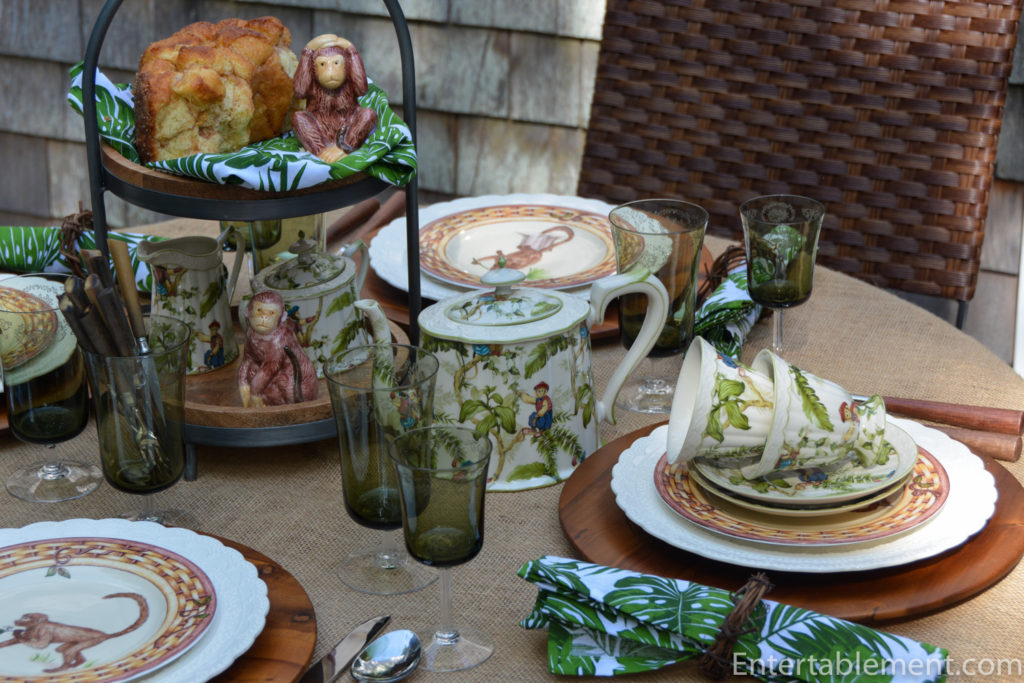 So I made Monkey Bread. Little balls of brioche dough coated with brown sugar, cinammon and butter. Lots and lots of butter. 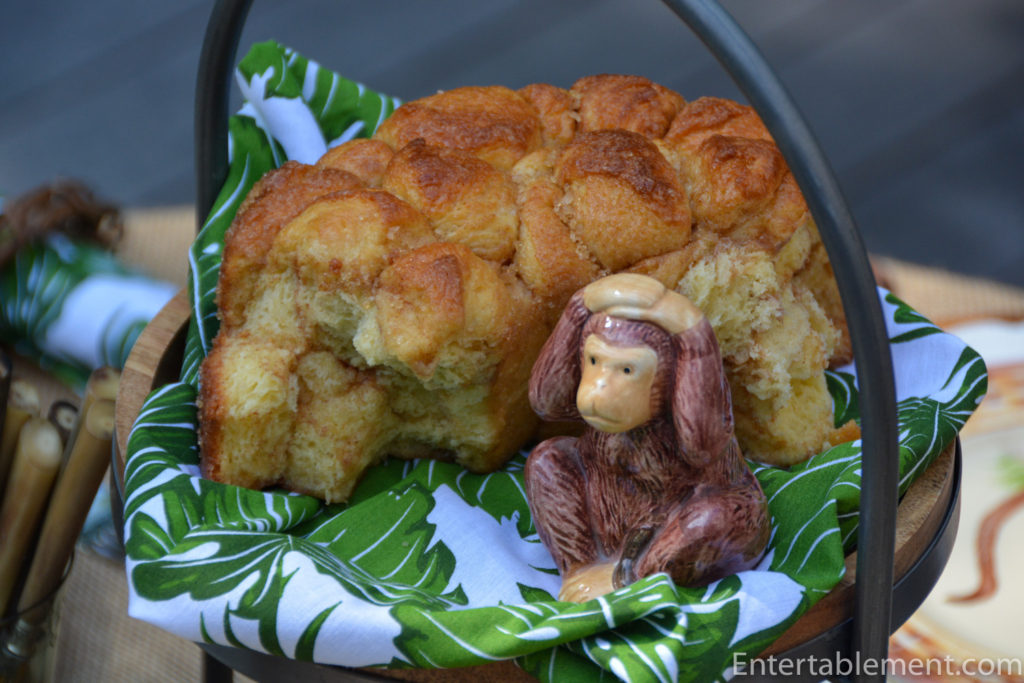 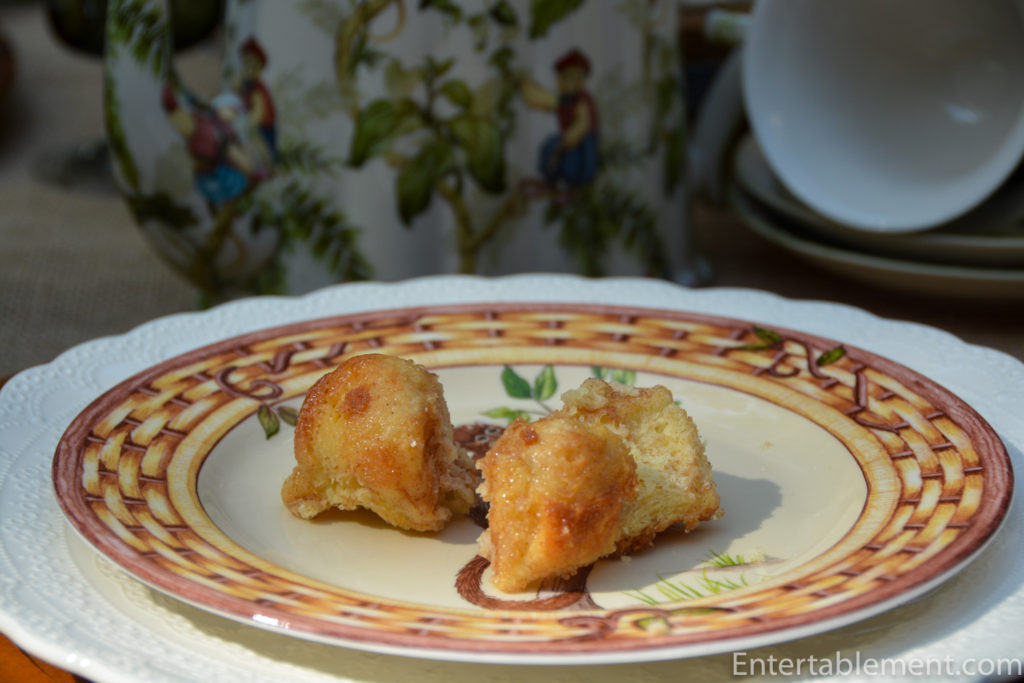 Especially when you drizzle caramel over it. 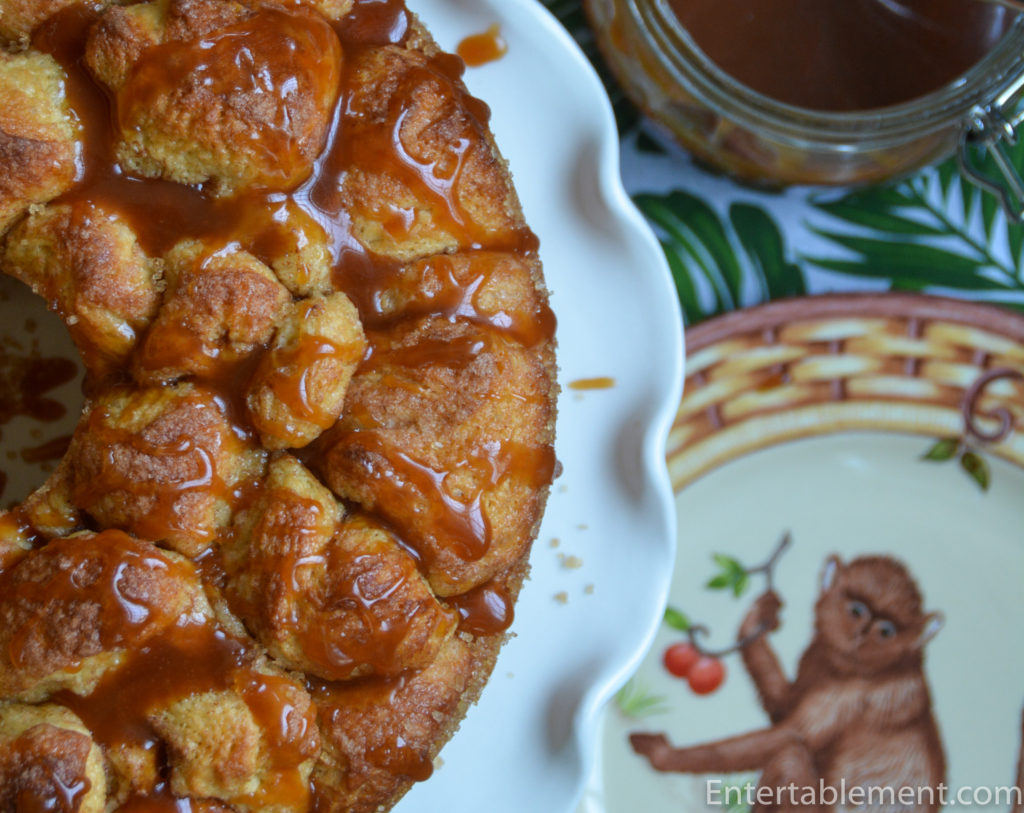 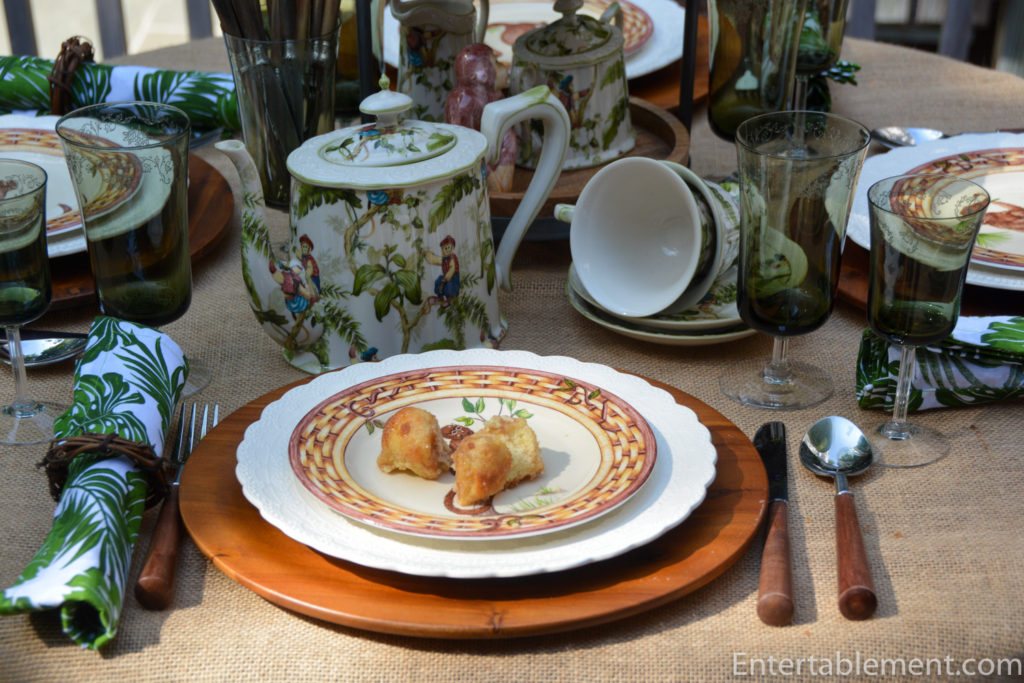 These little guys joined in for some fun, too. (They were an eBay find). 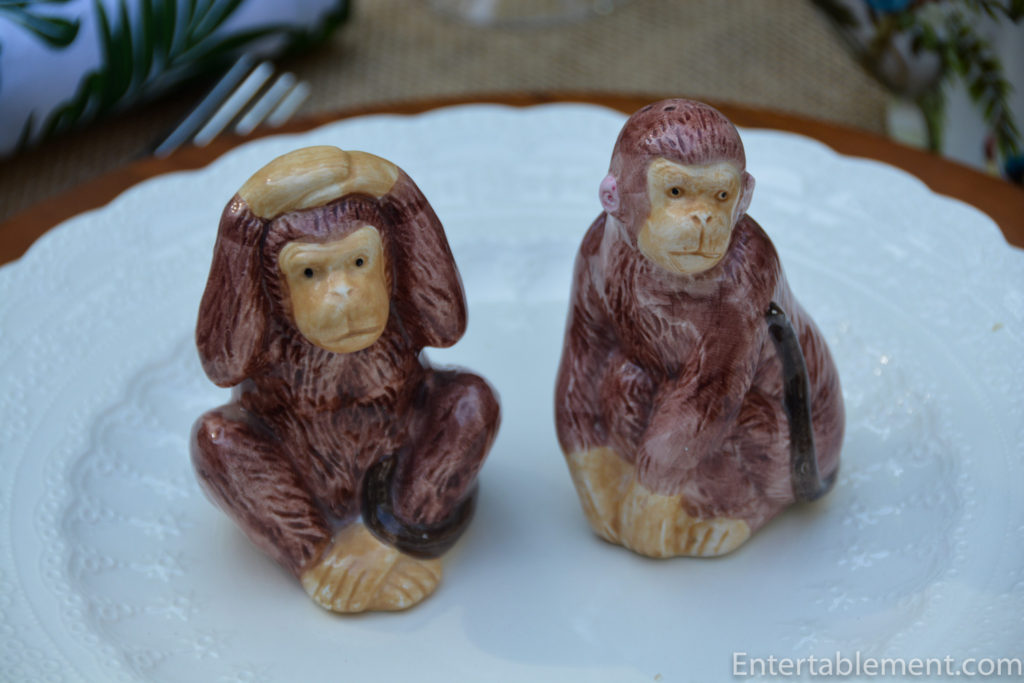 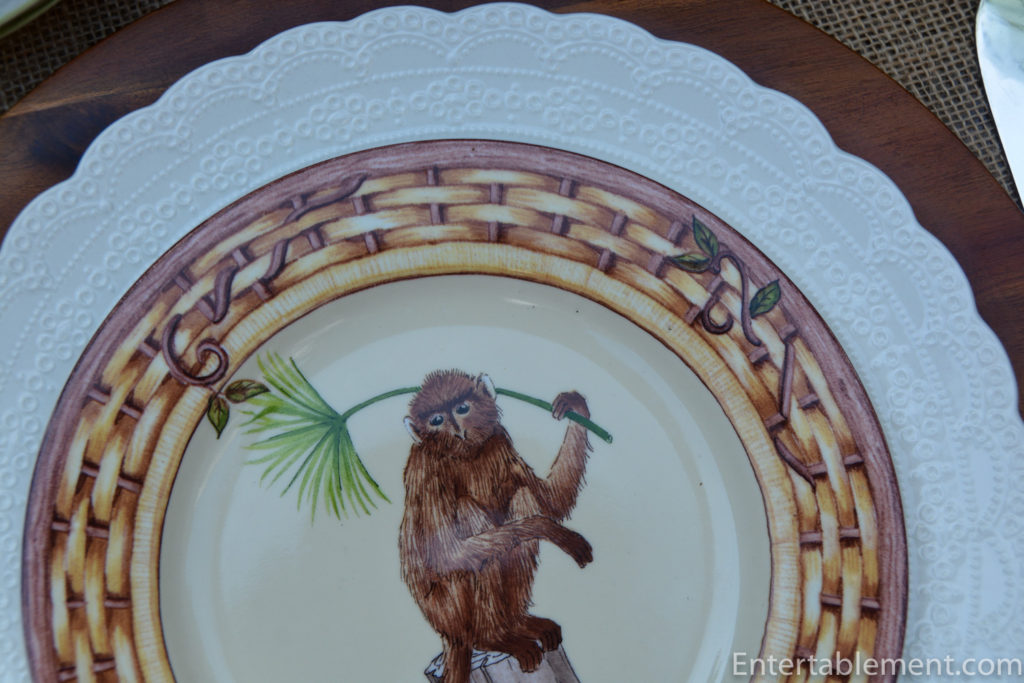 The Cameo vintage glasses by Fostoria fit in well with the theme.They are a soft, natural shade of green that doesn’t draw the eye too much. 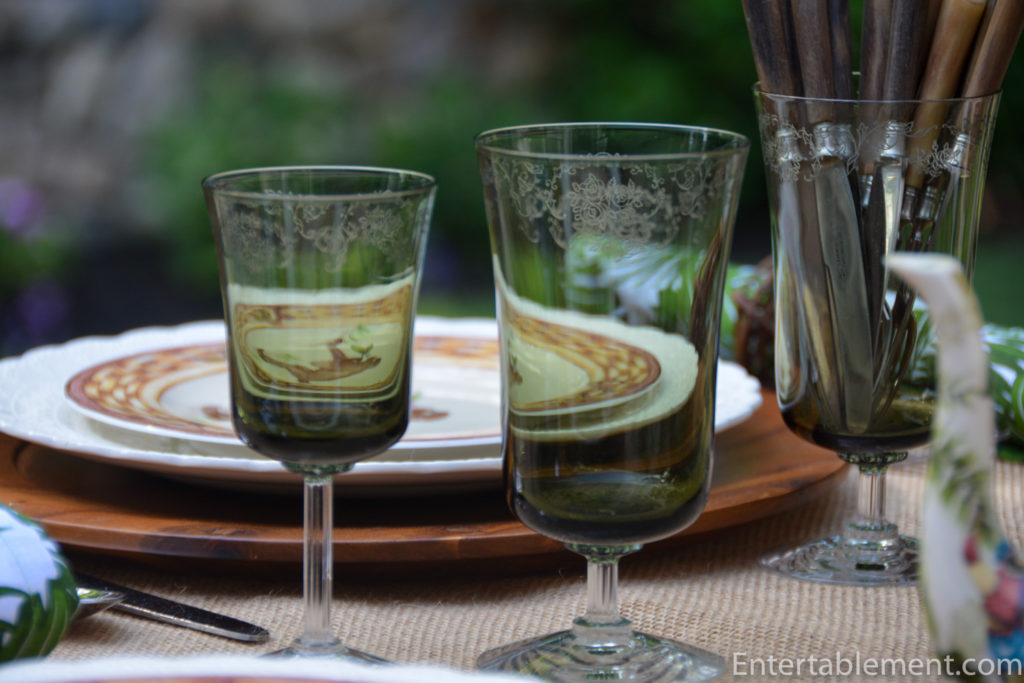 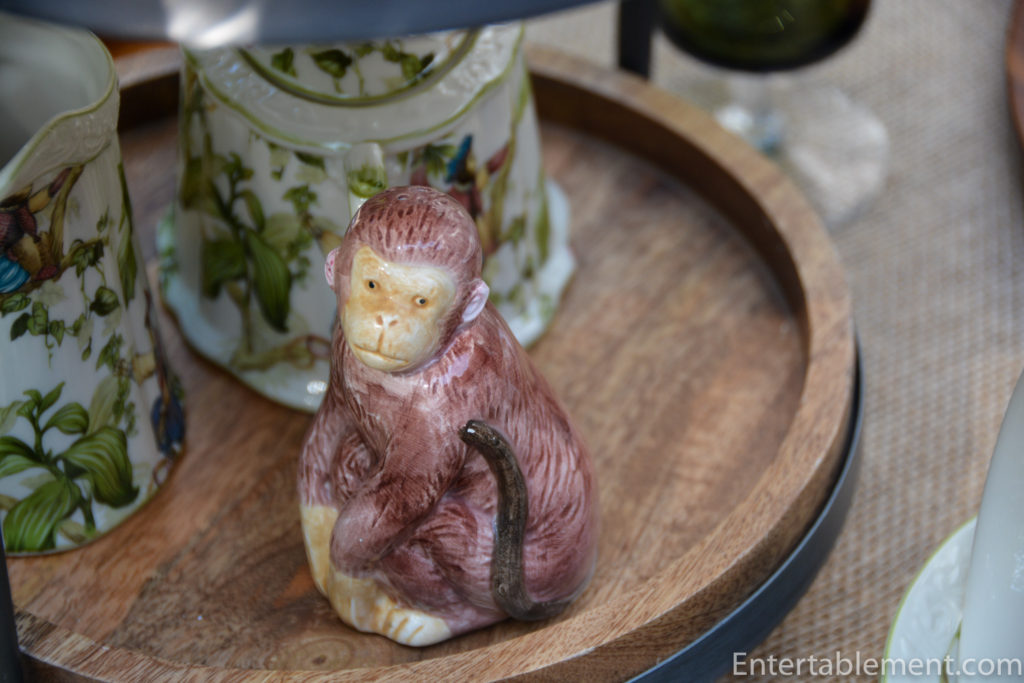 “People say we monkey around.” 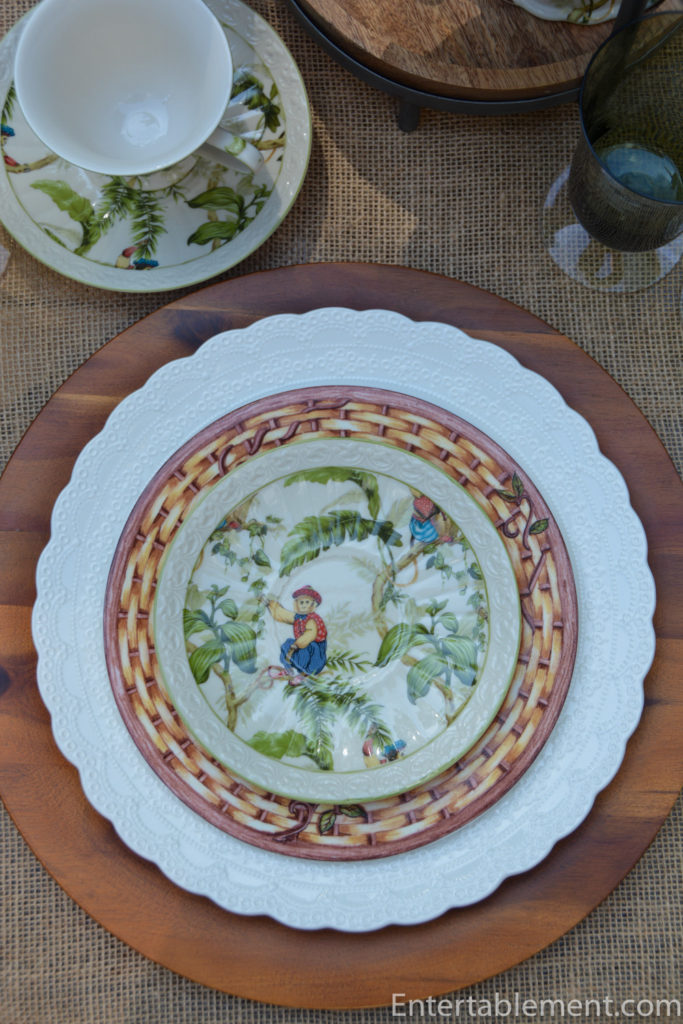 “But we’re too busy singing, to put anybody down.” 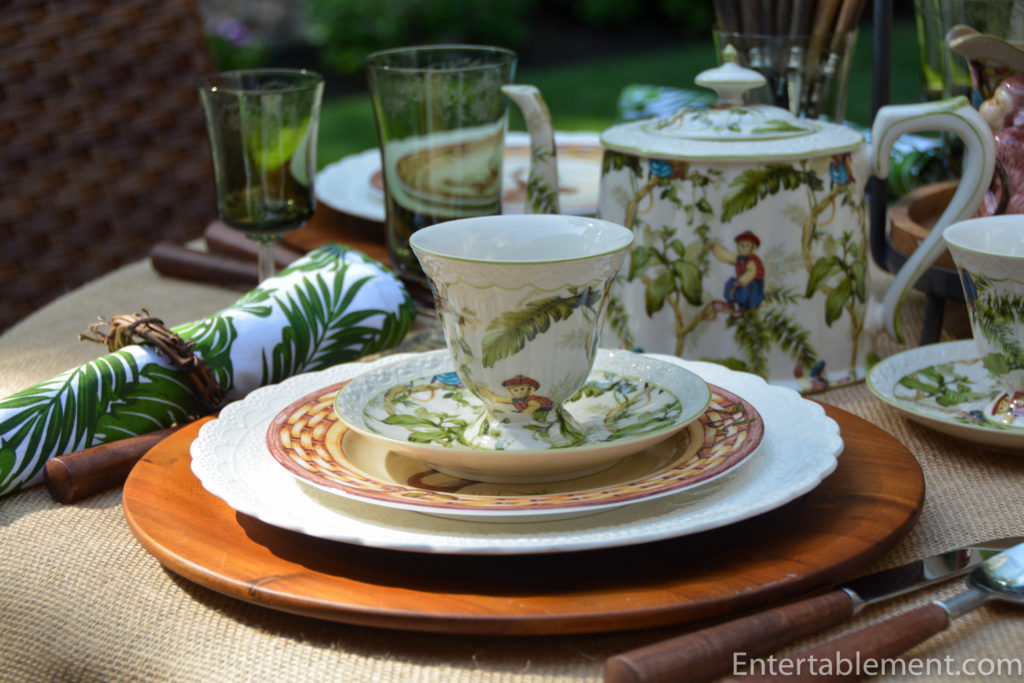 Hope you get some time to Monkey Around this Labour Day weekend. Enjoy the summer while it lasts.