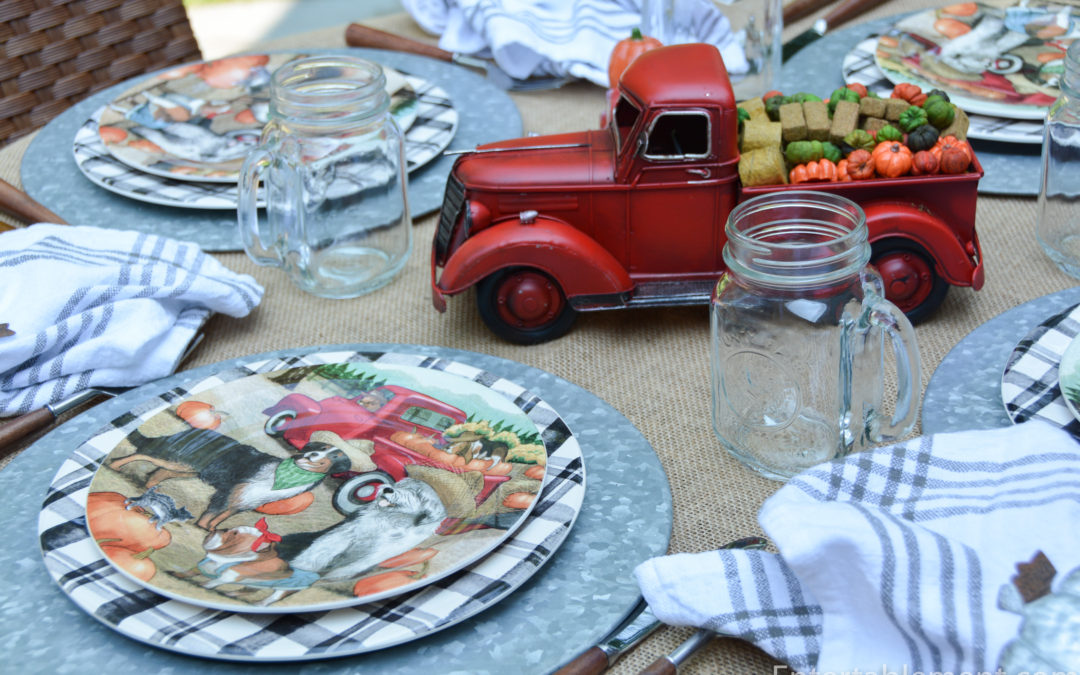 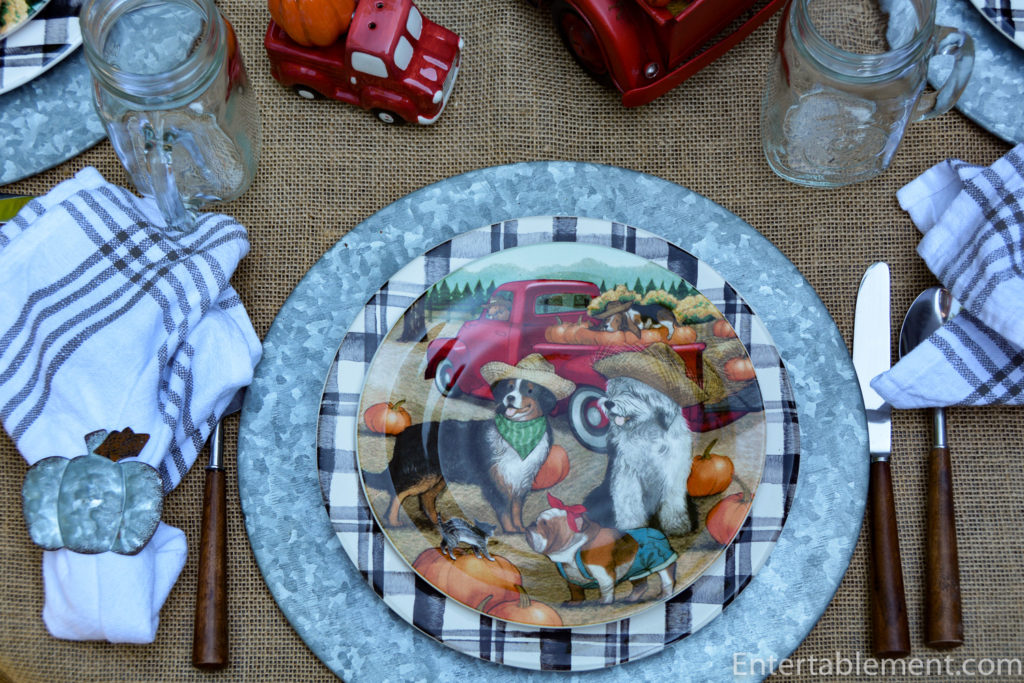 It’s autumn in the country. With hounds and sheepdogs, haybales and pumpkins. 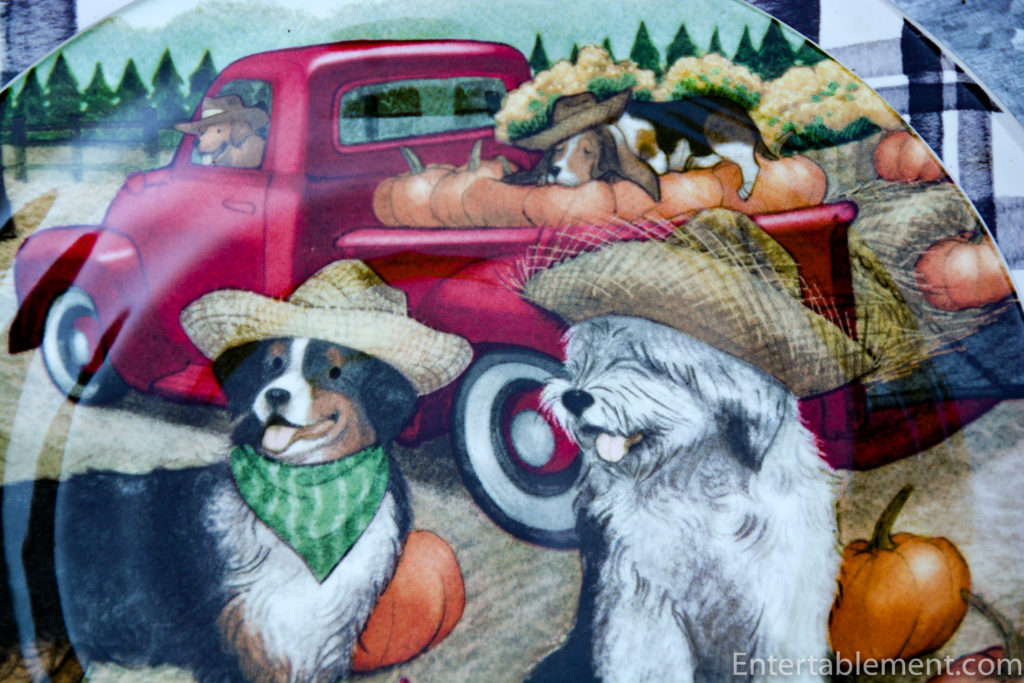 There’s a kitten, too, for good measure. “greeting” a bulldog. 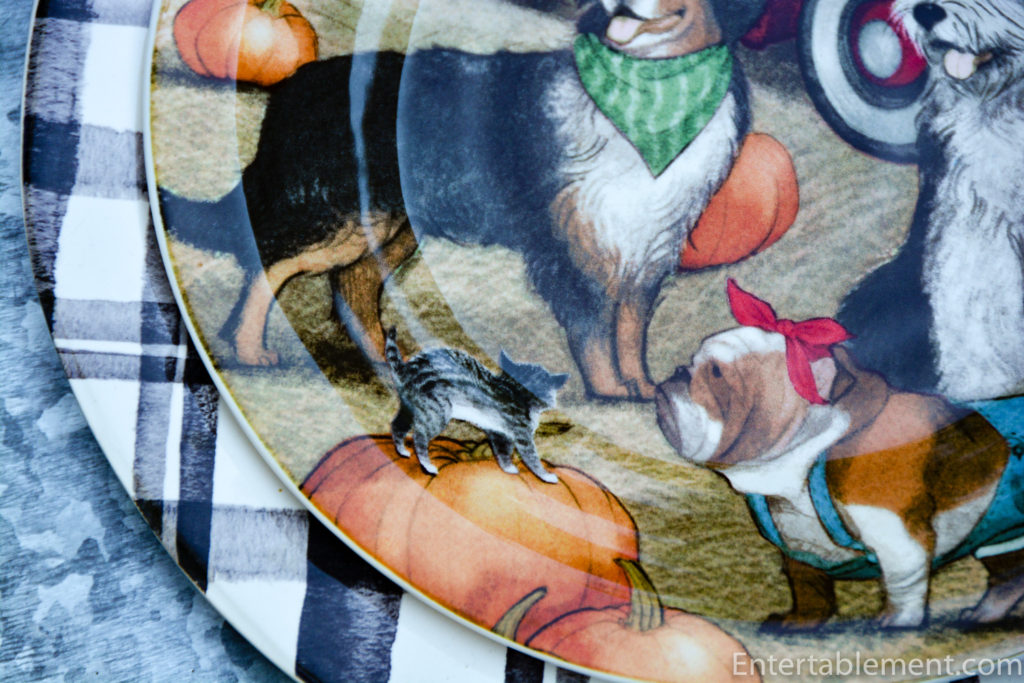 I always think of that as the “Halloween Cat” position – similar to what Dundee showed us when Clementine came home. Not the friendliest look. 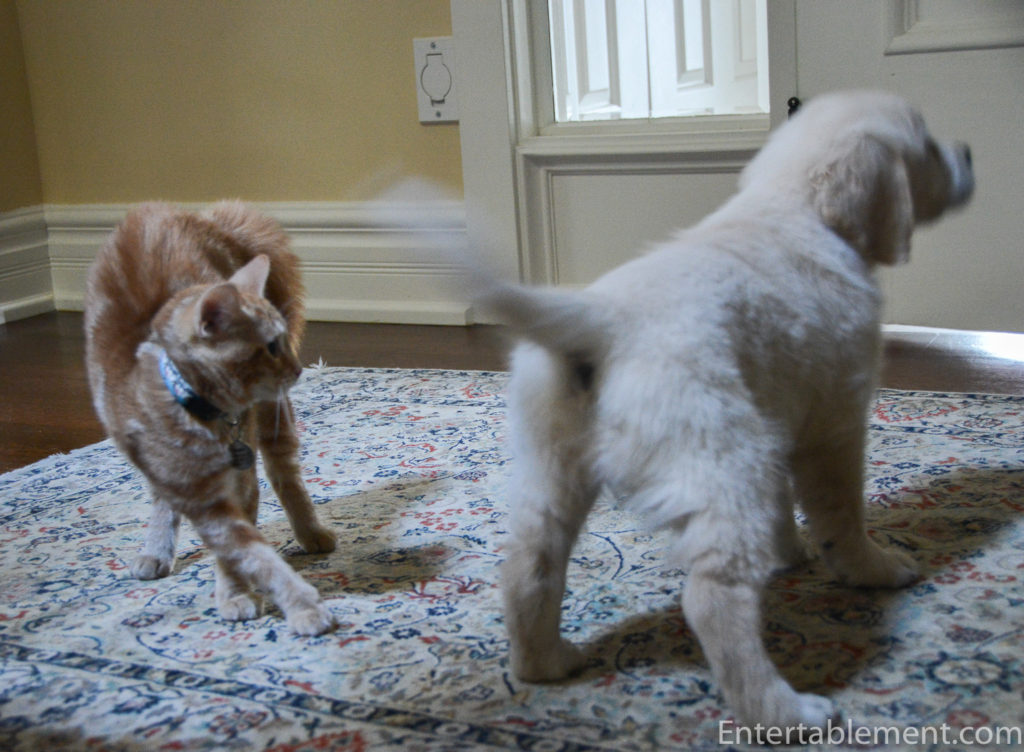 This fun set of plates came from Pier 1 last year. I’m disappointed that they’ve pretty much killed off their animal-related wares and have moved to bland offerings that look like everyone else’s. So I’m glad these found their way home with me.  They still have the black & white gingham plates, though they’ve been renamed to Bradford Plaid. 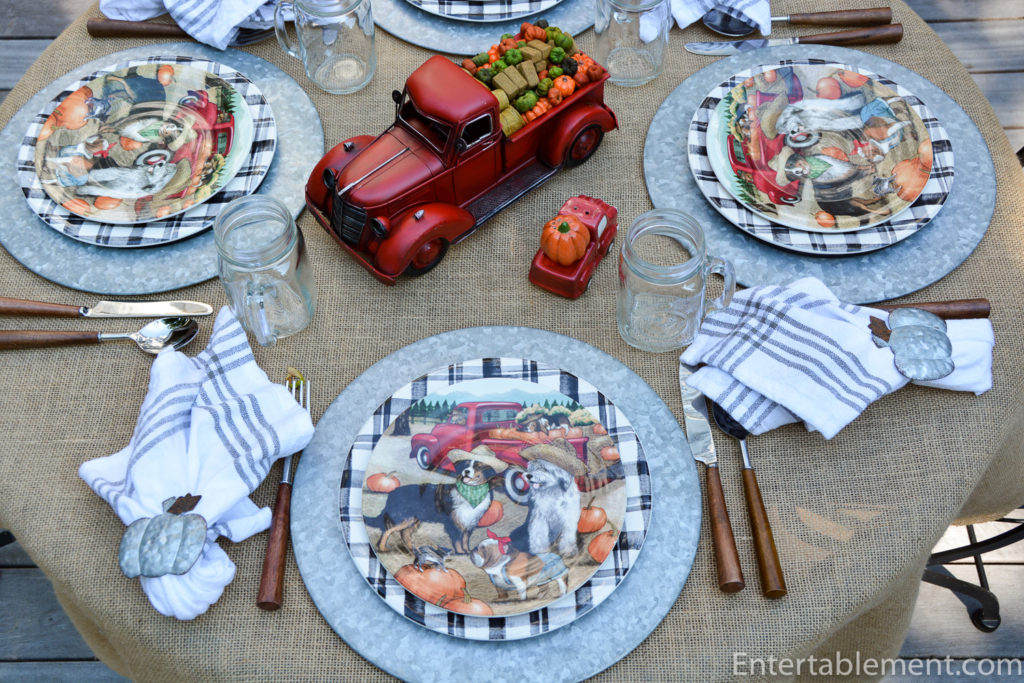 We had to have a couple of trucks, of course. With pumpkins! 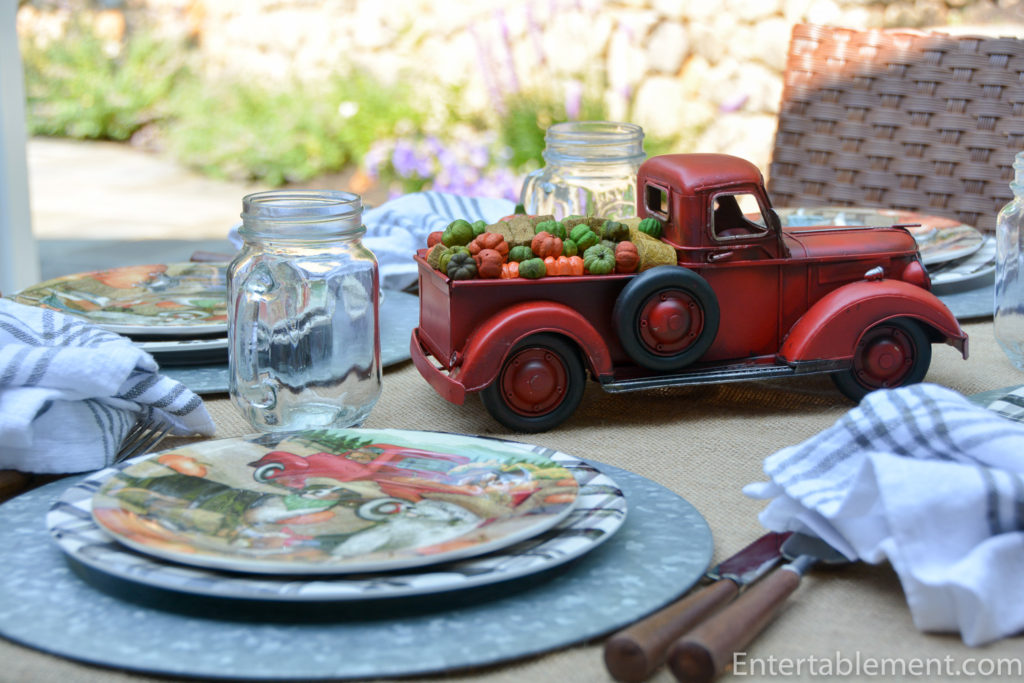 Pumpkins and hay bales from Hobby Lobby (is there anything they DON’T sell?) 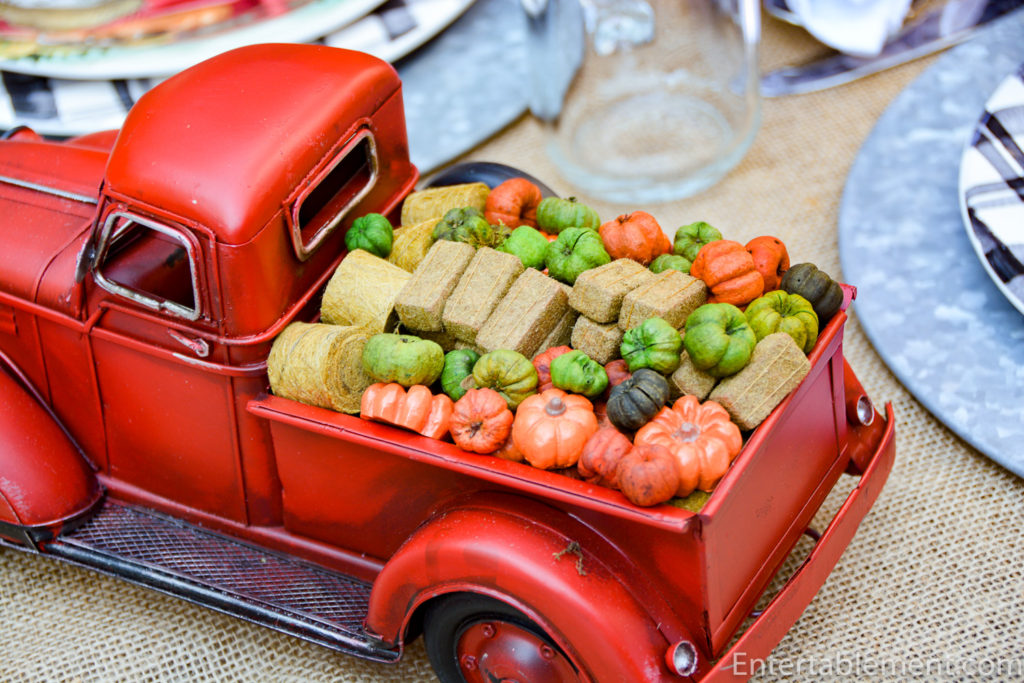 The red metal truck was from OakHill Trading Company on Etsy. It’s handmade and has wonderful detail.They no longer make this exact one, but have a slightly different one, 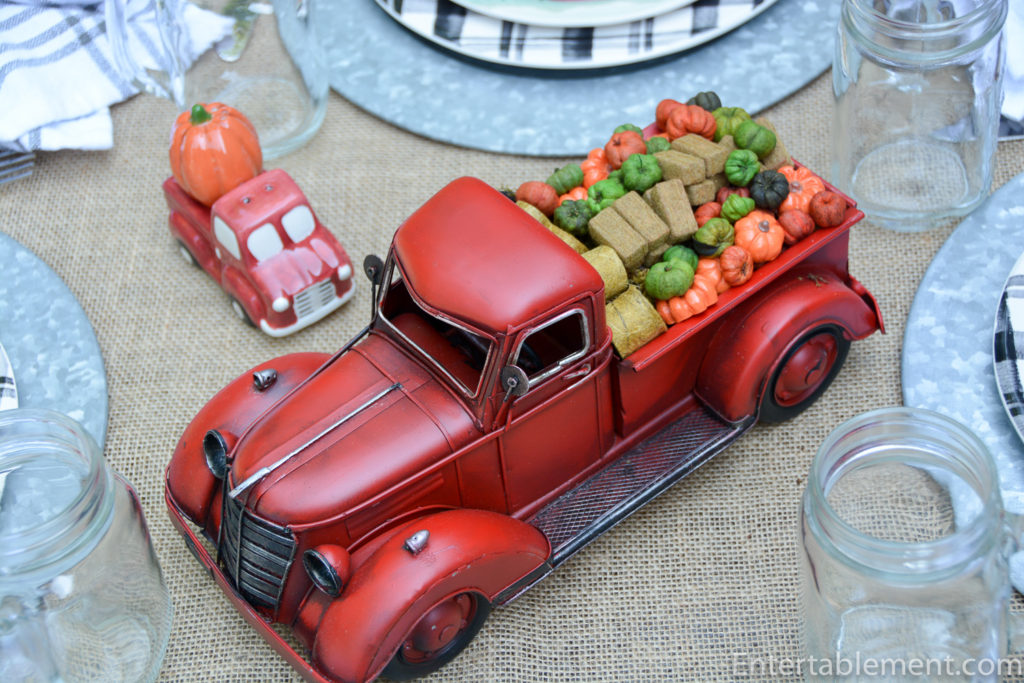 I’ve used this little salt & pepper shaker set quite frequentlly. Mine was from eBay. 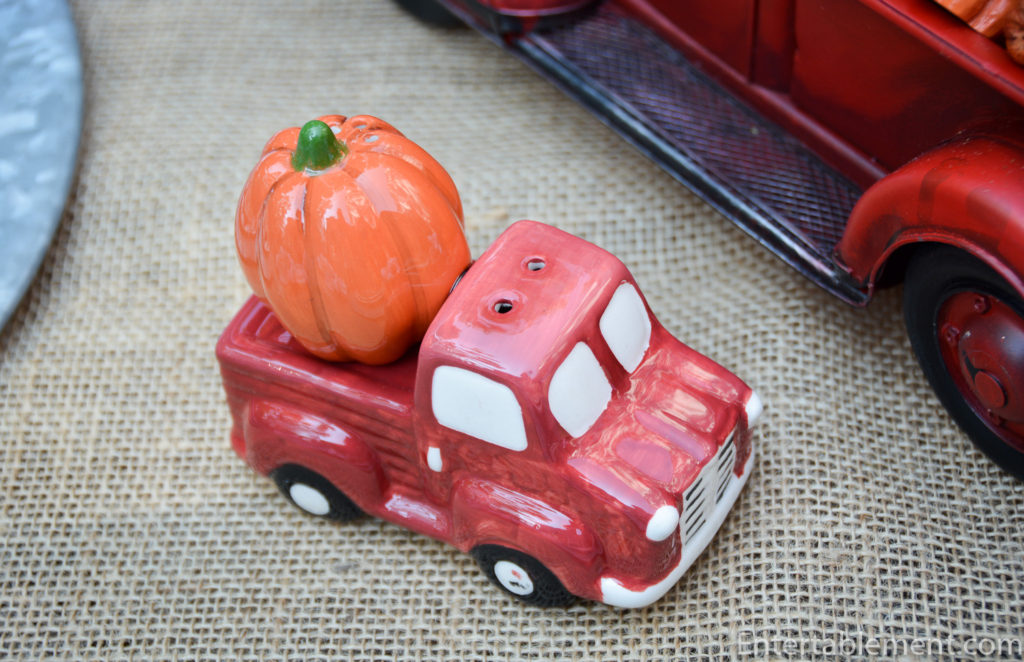 The pumpkin detaches, leaving the truck available for transporting many things, including sunflower cupcakes. 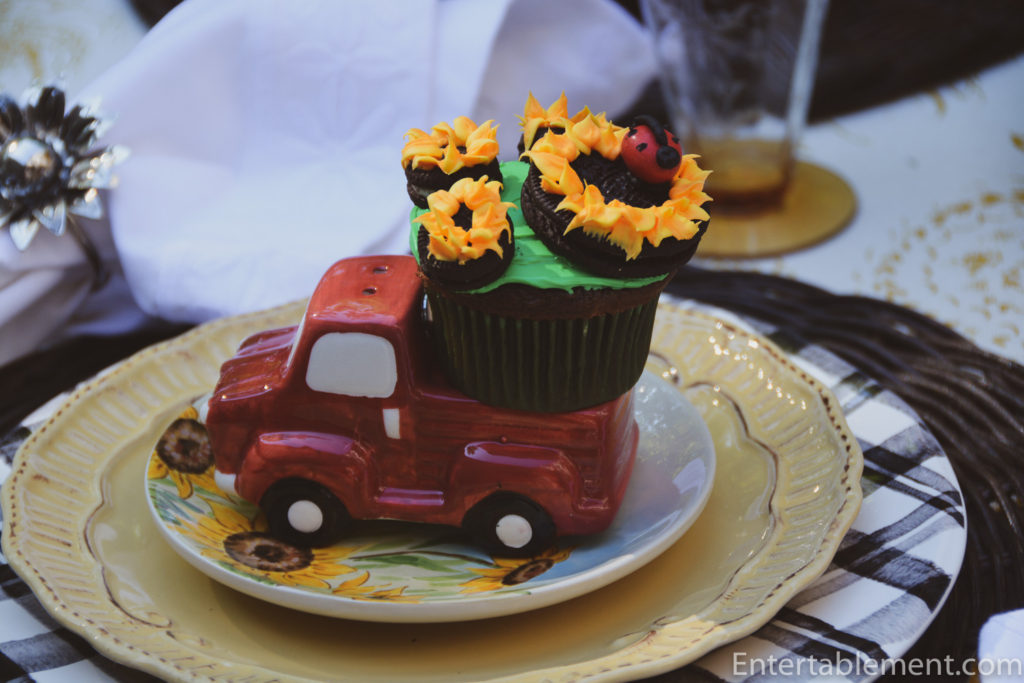 The galvanized pumpkin napkin holders and grey checked napkins were also both from Pier 1 last year. They have a black version of the napkin this year – online only. 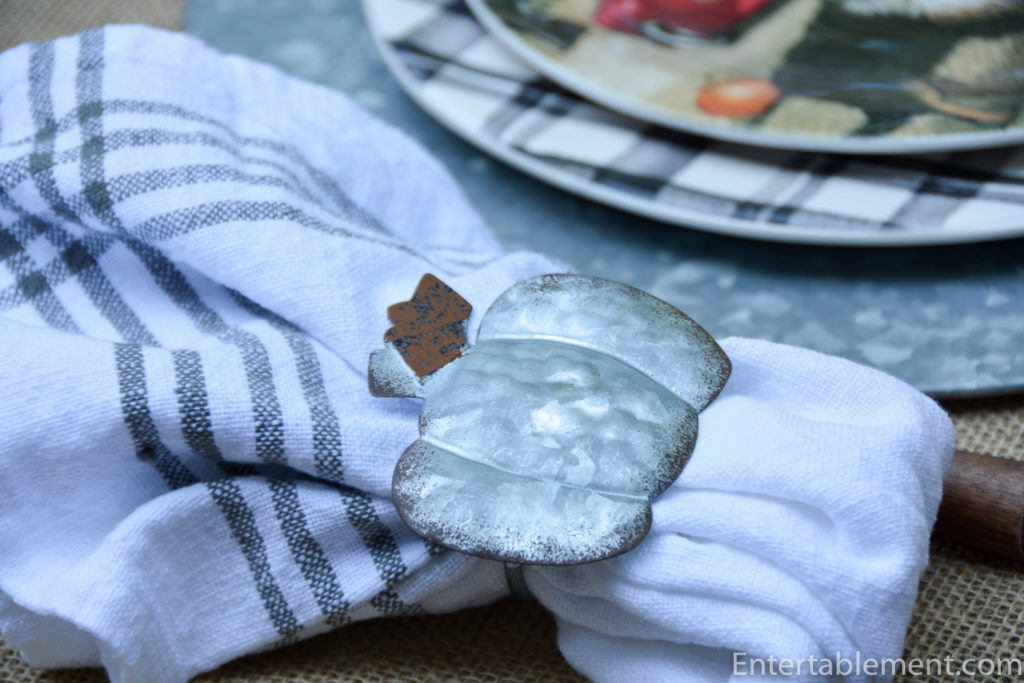 The galvanized chargers were from Christmas Tree Shops a few years ago, and the flatware was from World Market, also couple of years ago. 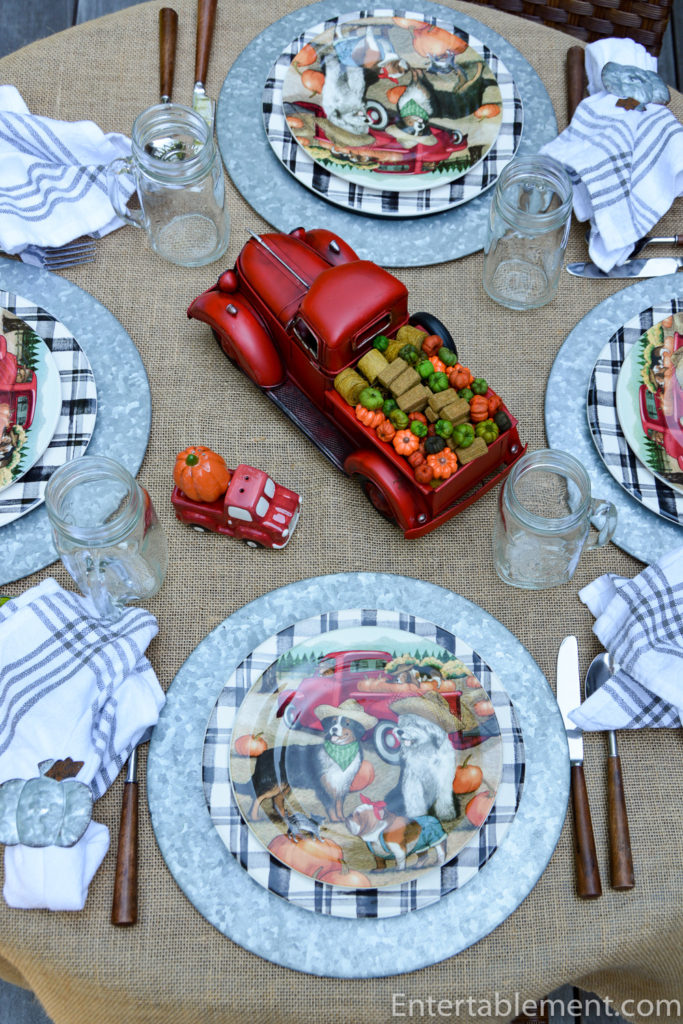 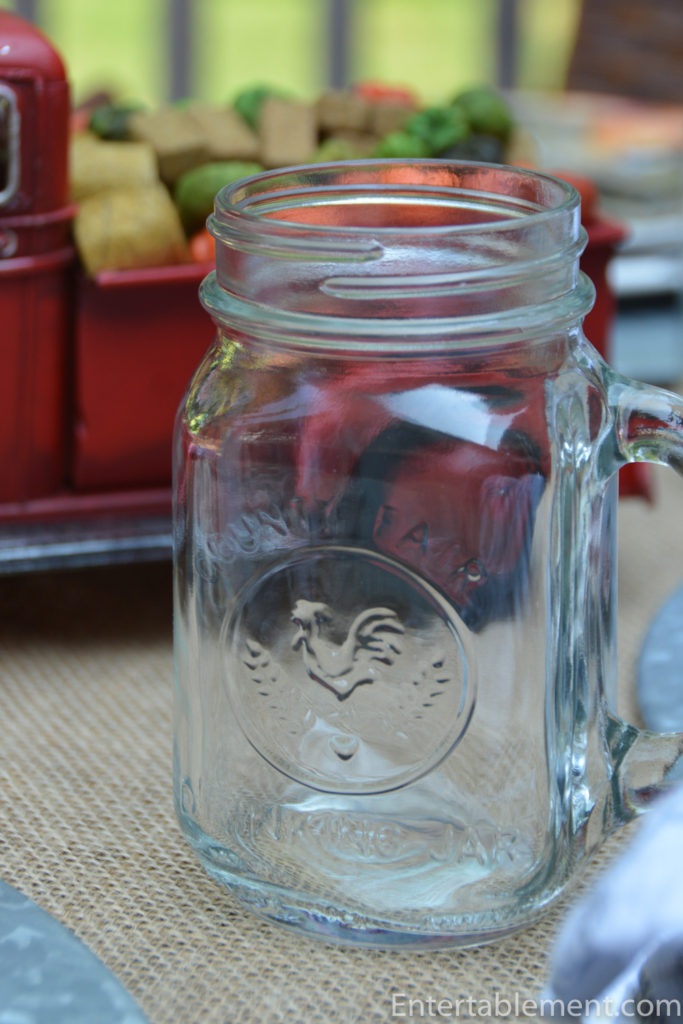 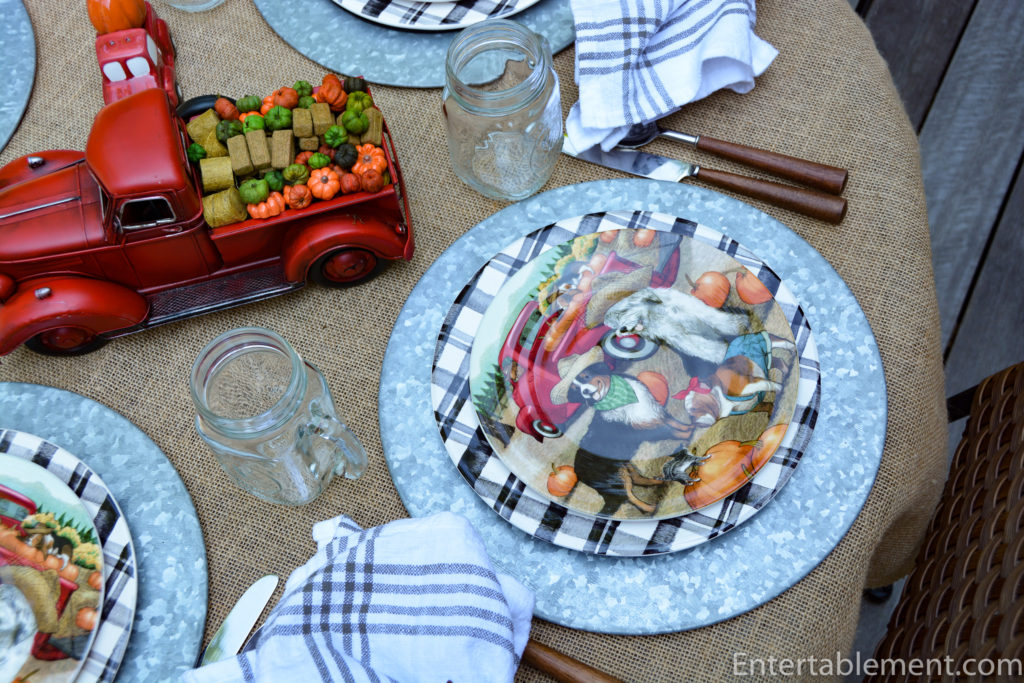 Our kids, Mike & Kirsten have an old English Sheepdog, named Winston (you think therre might be a Churchill theme in our family)? Winston and Churchill were puppies together and I fondly remember their antics in the back yard. They got into all kinds of mischief; they reminded me of two naughty boys caught smoking behind our pool shed. 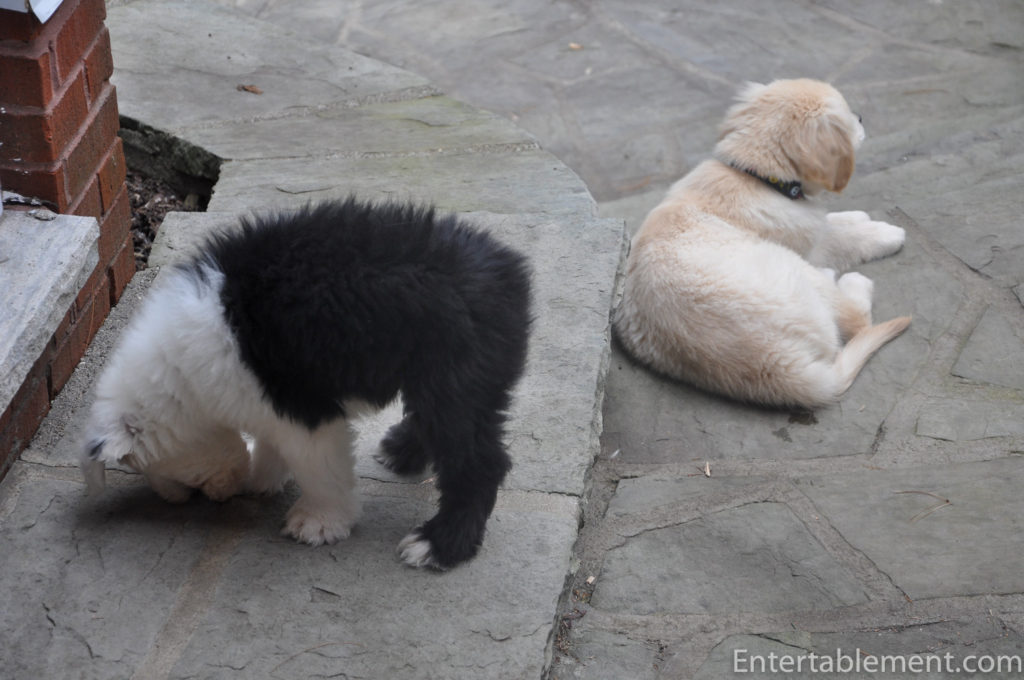 Old English Sheepdog puppies are black and white. The black gradually fades to grey as they get bigger. Isn’t Winston’s teddy bear face a riot? He is just the goofiest, friendliest dog, and outweighs our guys about 2:1. Instinct dies hard – he’s been known to herd the kids, pushing them around with his back end if he thinks they are in danger of wandering off and getting lost. 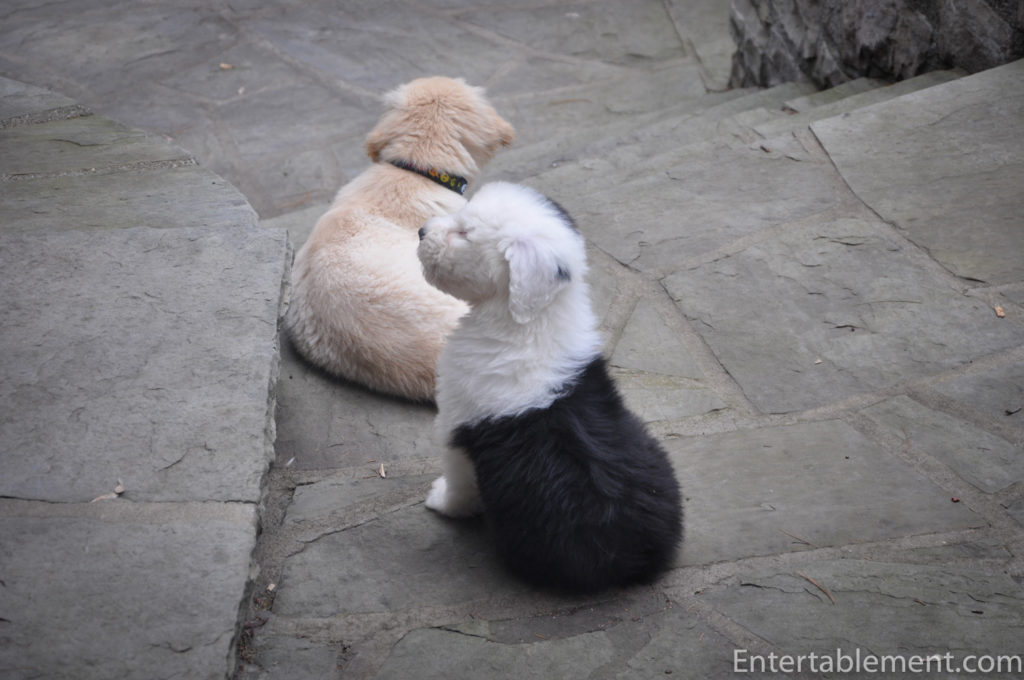 He’s all grown up now, and in his honour, these plates found their way over to Mike & Kirstens after I set this table. 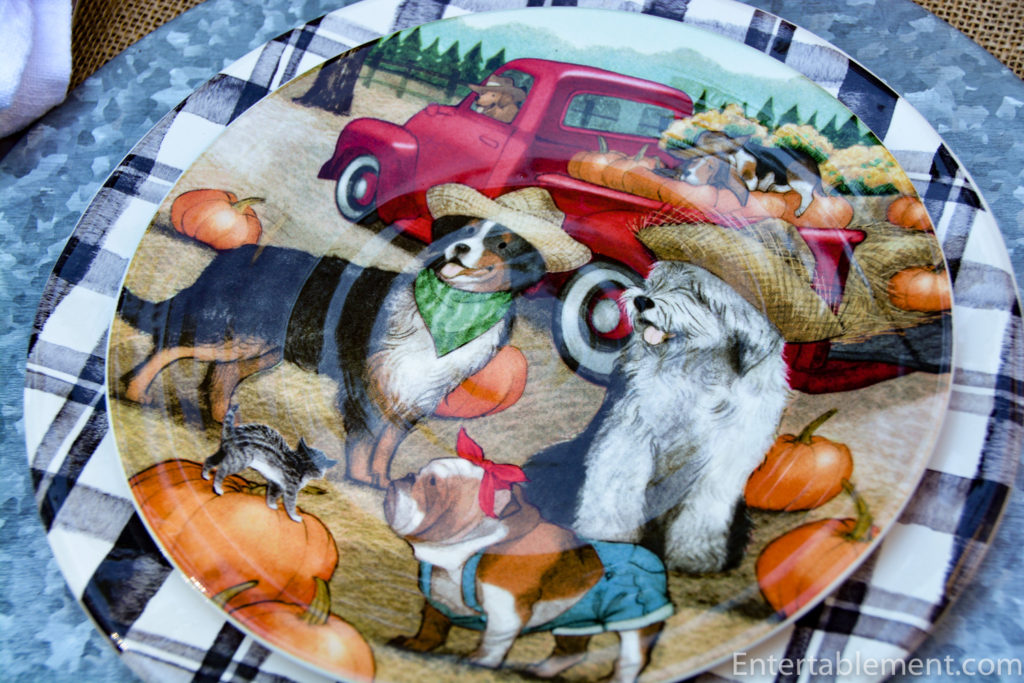 Summer is returning briefly this week with temperatures in the 80s. I’m going to enjoy every minute of it with as much time outside as I can manage. The garden still needs some attention and I’m looking forward to relaxing on the porch afterwards with a cool glass of white wine. It’s almost the weekend and time to enjoy family, friends and the blessings of good weather. 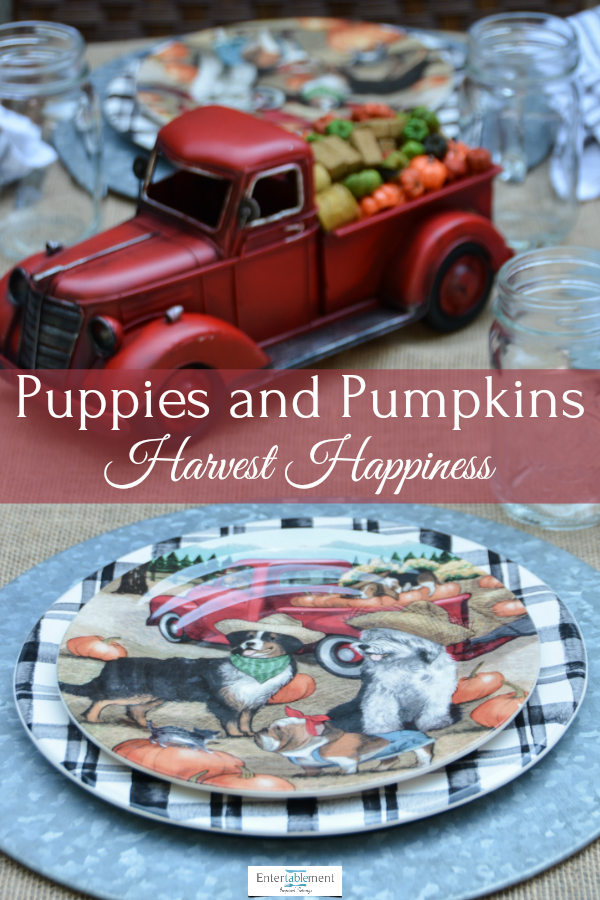