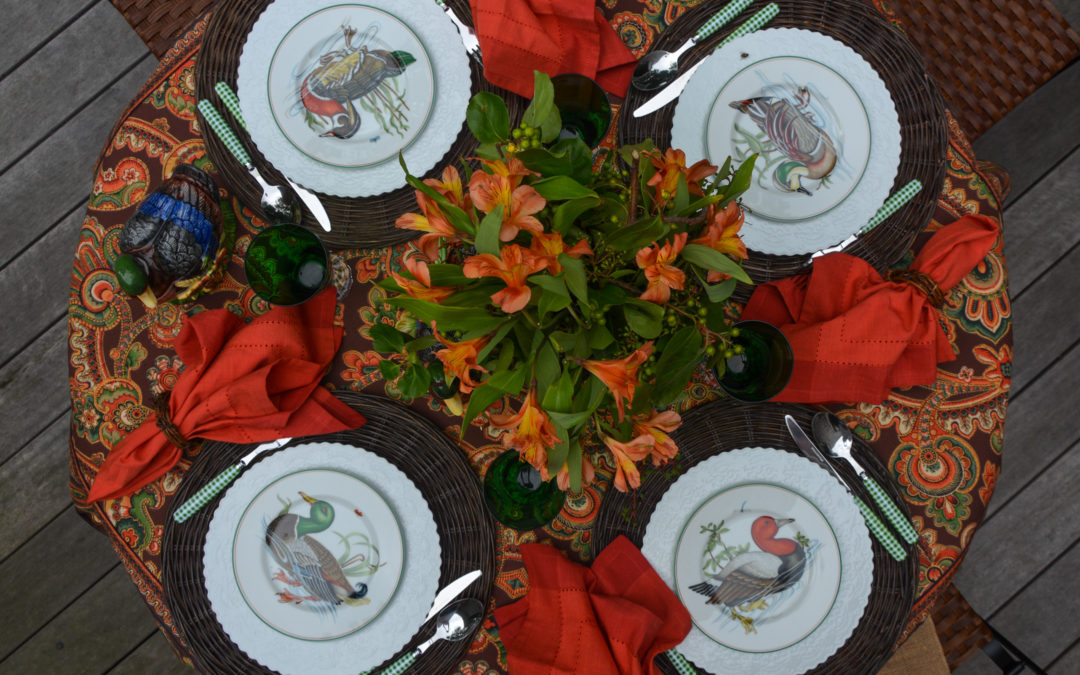 Game bird patterns are a popular item for fall tablescapes, and when I found this vintage duck-themed Fitz and Floyd set I was eager to swim along. 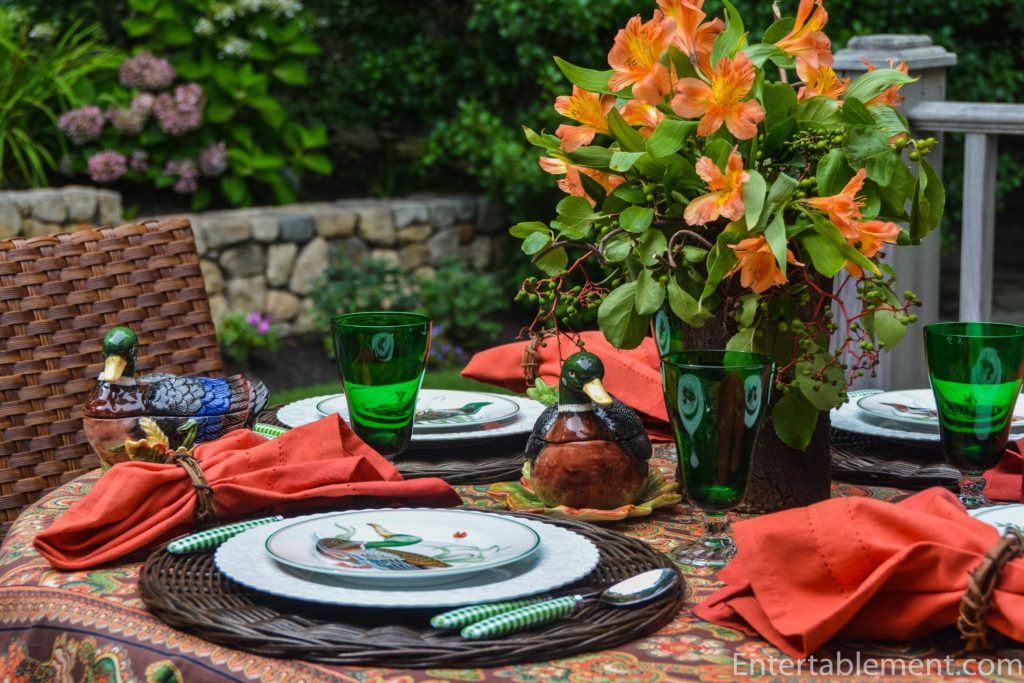 Canard Sauvage (Wild Ducks) joined Fitz and Floyd’s lineup of patterns in the 1980s. The pictures on Replacements don’t do them justice. In person, the plates are vibrantly coloured and filled with enchanting detail. 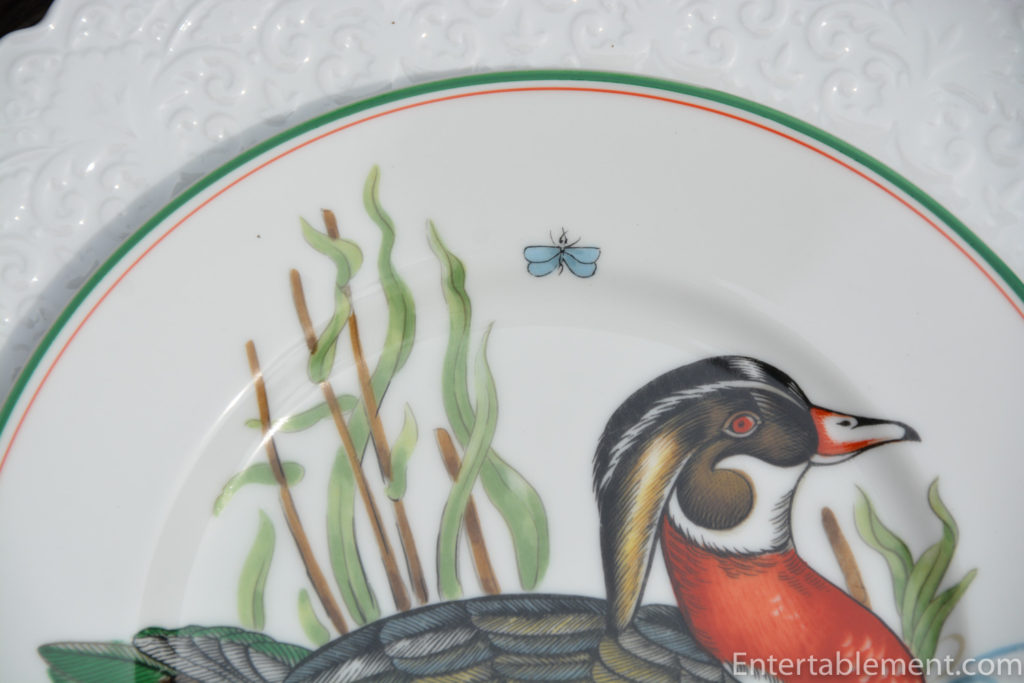 The pattern comprises depictions of two Wood Ducks and two Grand Mallards. This is the Green Wood Duck. 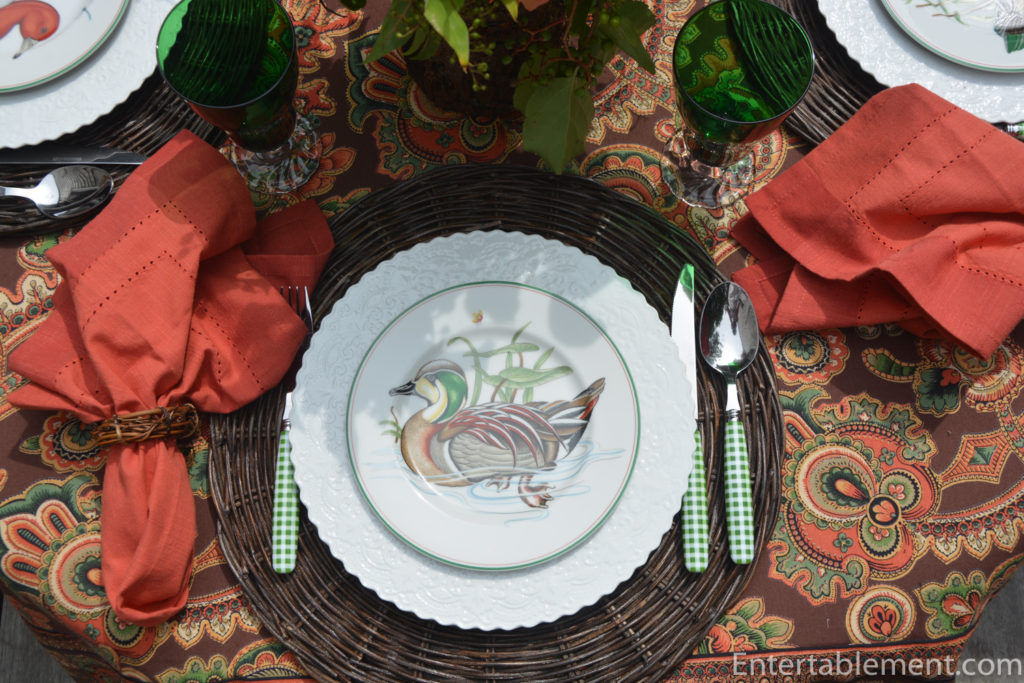 Many of us are familiar with the Green Mallard. 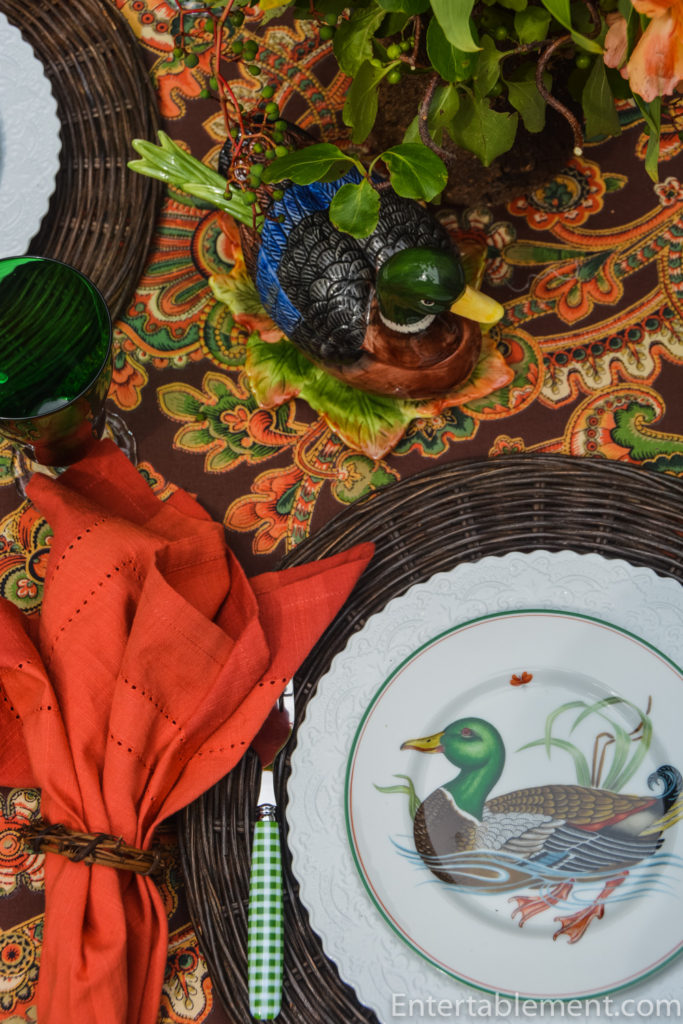 Both the Orange Wood Duck and … 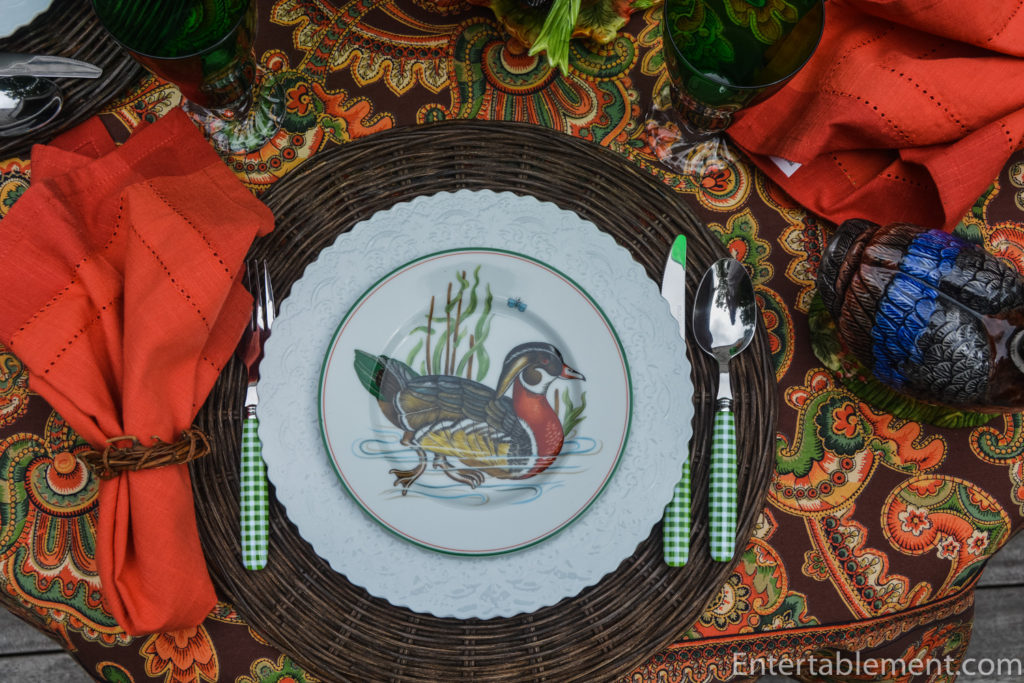 …the Orange Mallard were new to me. 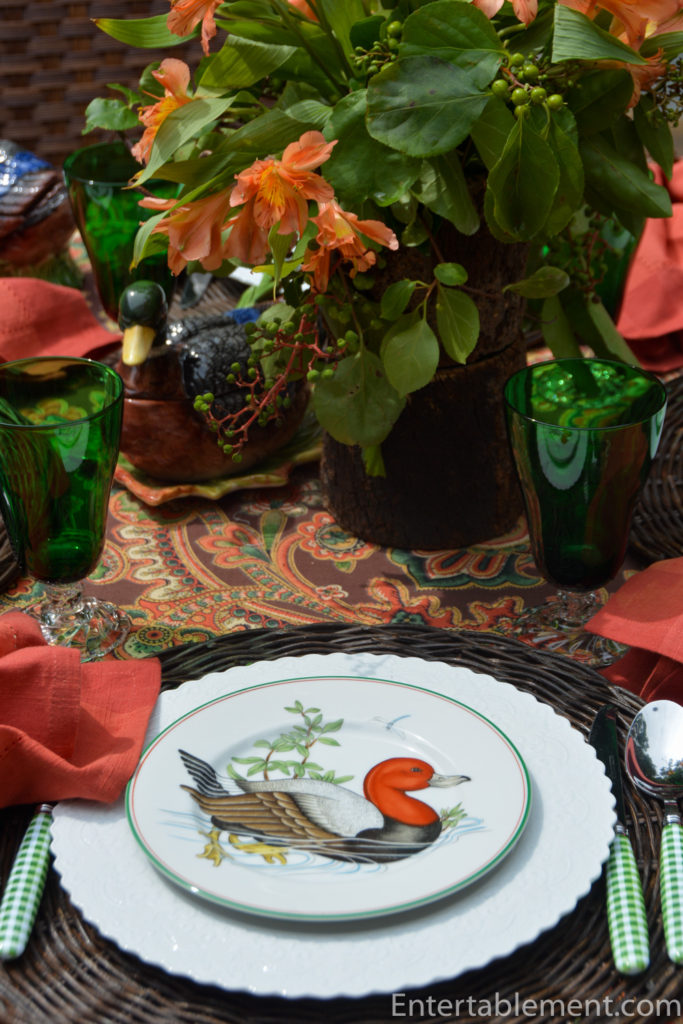 My granddaughter Juliana (the duck-lover) was ecstatic to receive these plates. I imagine many afternoon snacks will be consumed from them as time goes on. 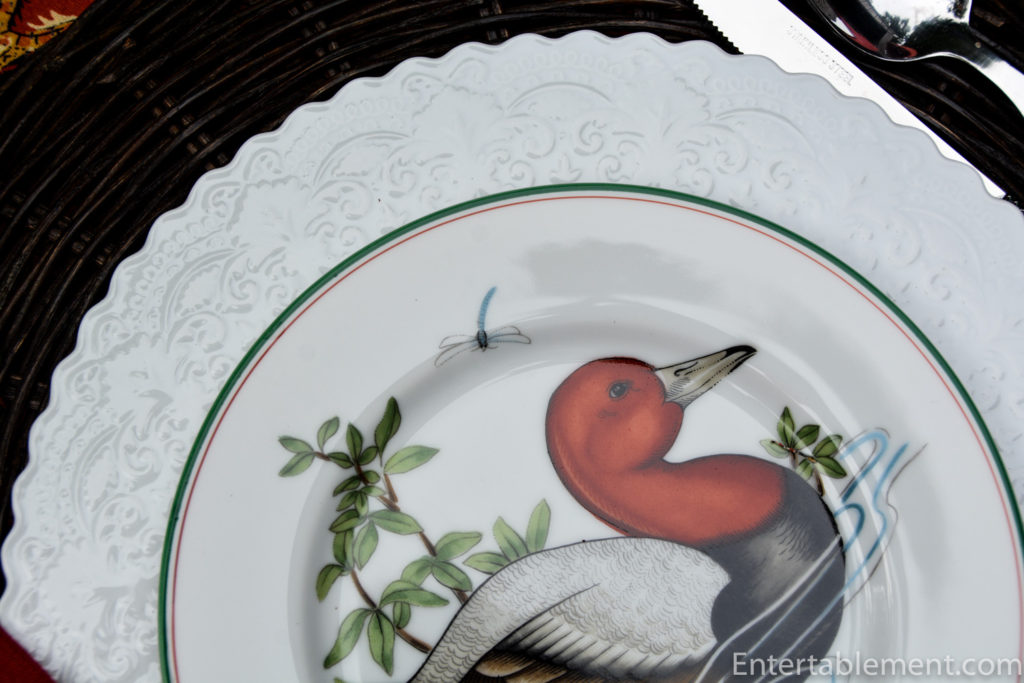 Juliana has now entered Grade 1, and has decided that her future career will be as a farmer. This is a slight change from wanting to be a duck when she grew up when she started Kindergarten. 🙂 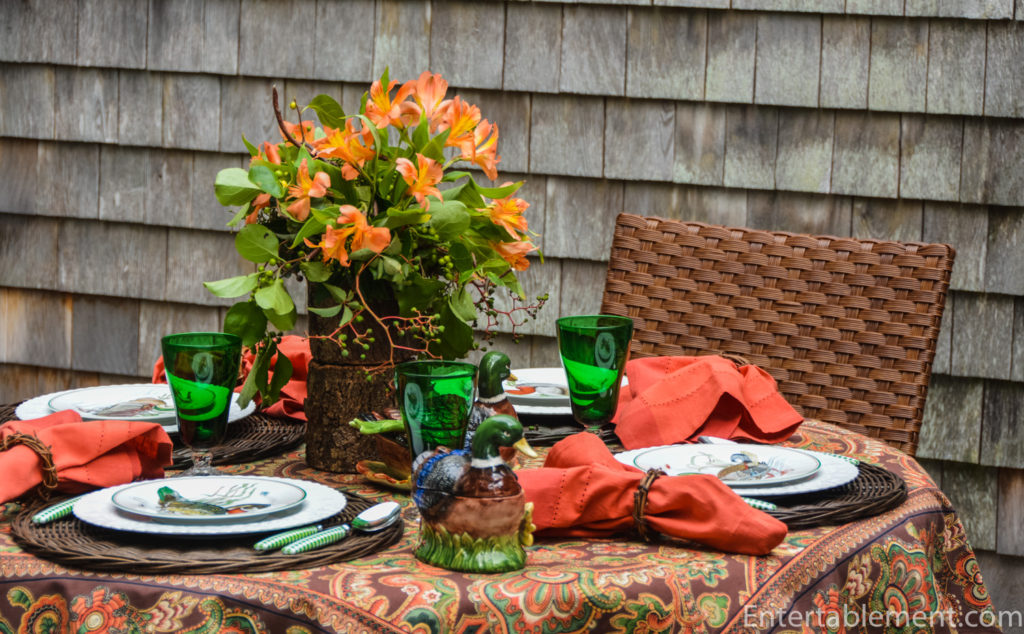 I chose some old favourites and some new for the tablesetting. Vintage Colonial Dame Green iced tea glasses from Fostoria seemed a natural with the Spode Green Mallards, part of their Harvest Figural Collection from 2011-2014. 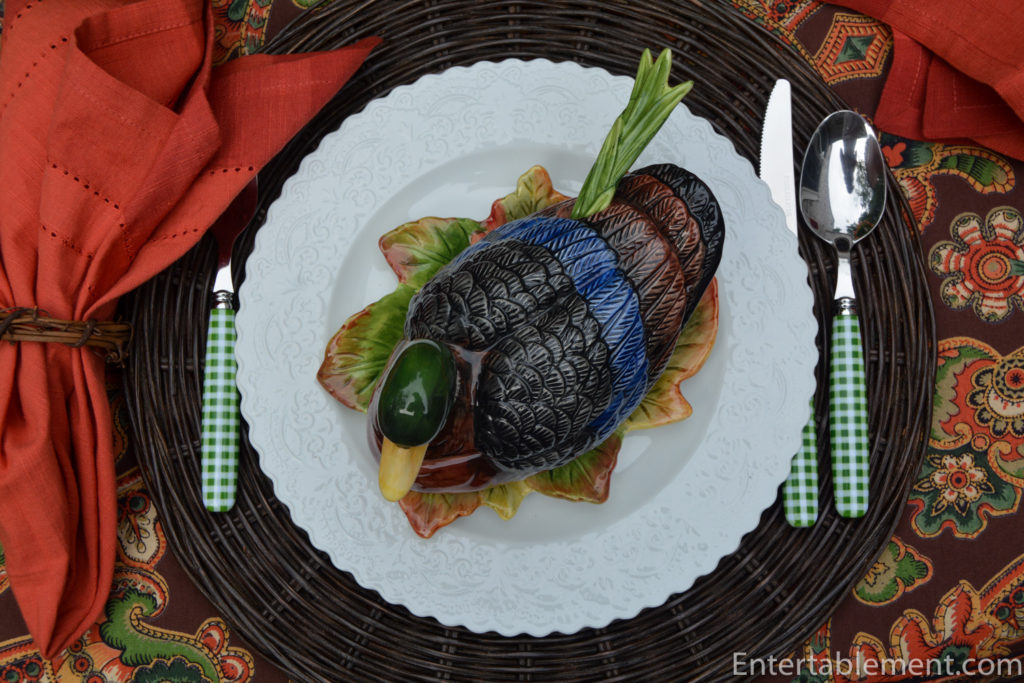 You can sometimes find new pieces on Amazon and previously enjoyed ones on eBay. 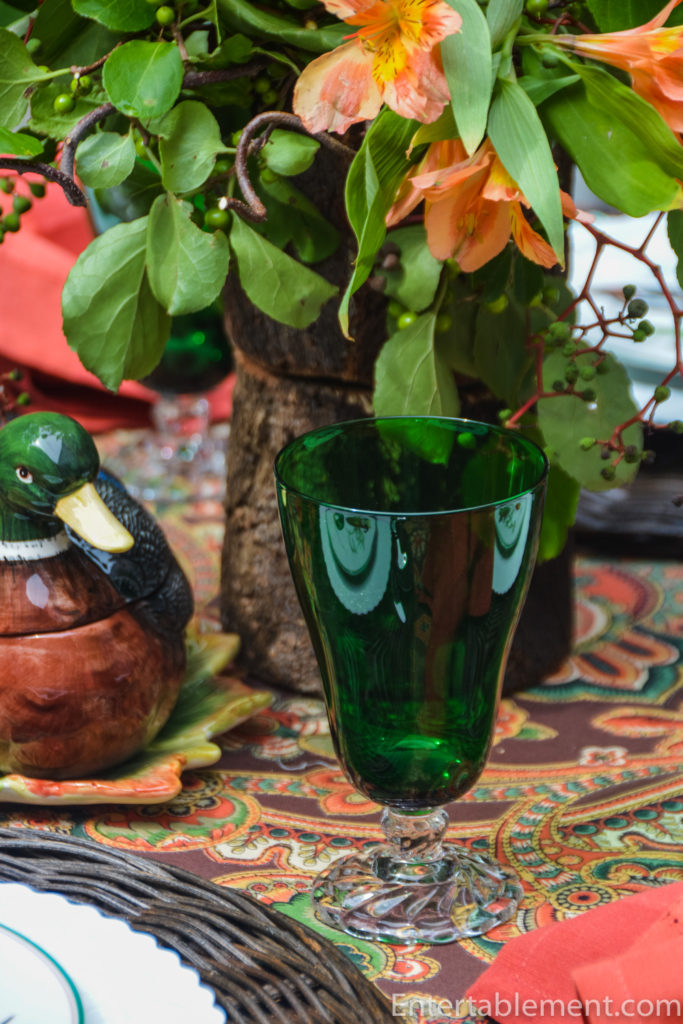 I went with Sophia by Ralph Lauren for the dinner plate. They were an eBay find. 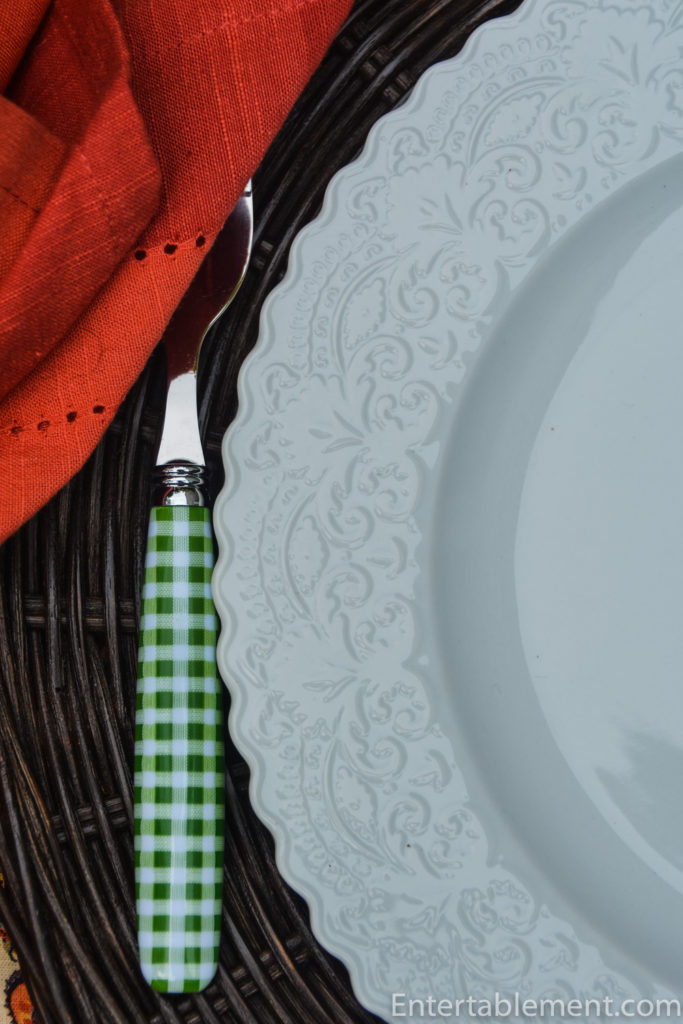 The scalloped edge and scroll pattern around the shoulder of the plate provided a bit of visual interest, without being over the top. There’s already a lot going on with the paisley patterned tablecloth from April Cornell. 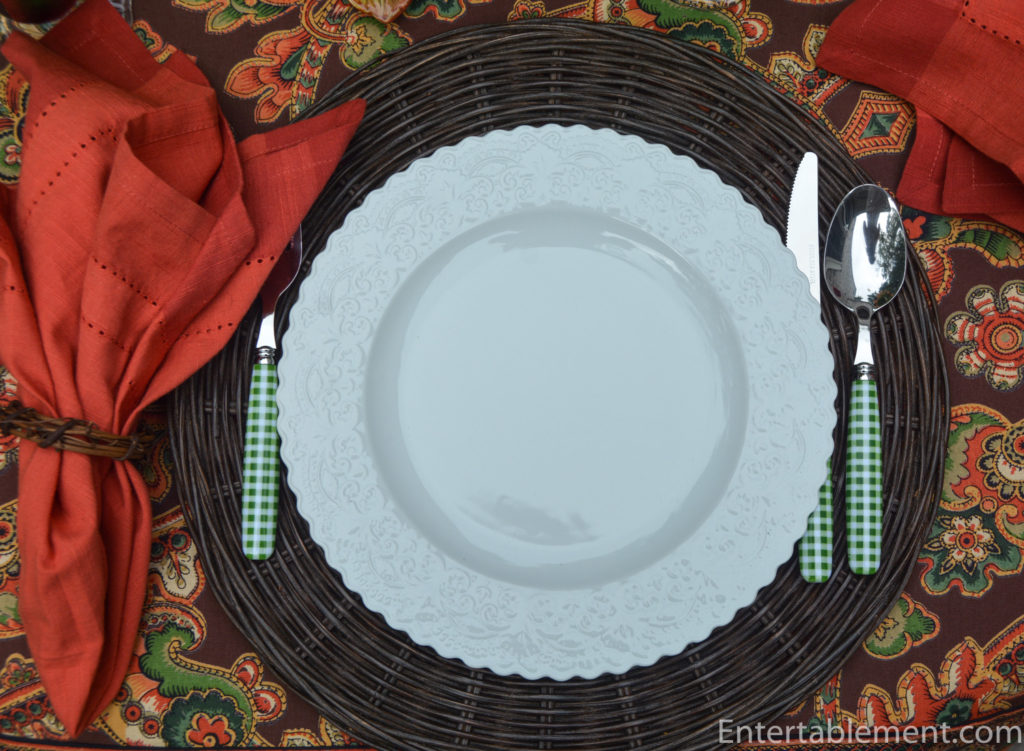 I spotted this pattern, Queen’s Court Chocolate (or something very similar) years ago in a Victoria Magazine, but wasn’t able to track it down at the time. I finally came across it on the April Cornell website in the Attic section, so picked it up for a song. 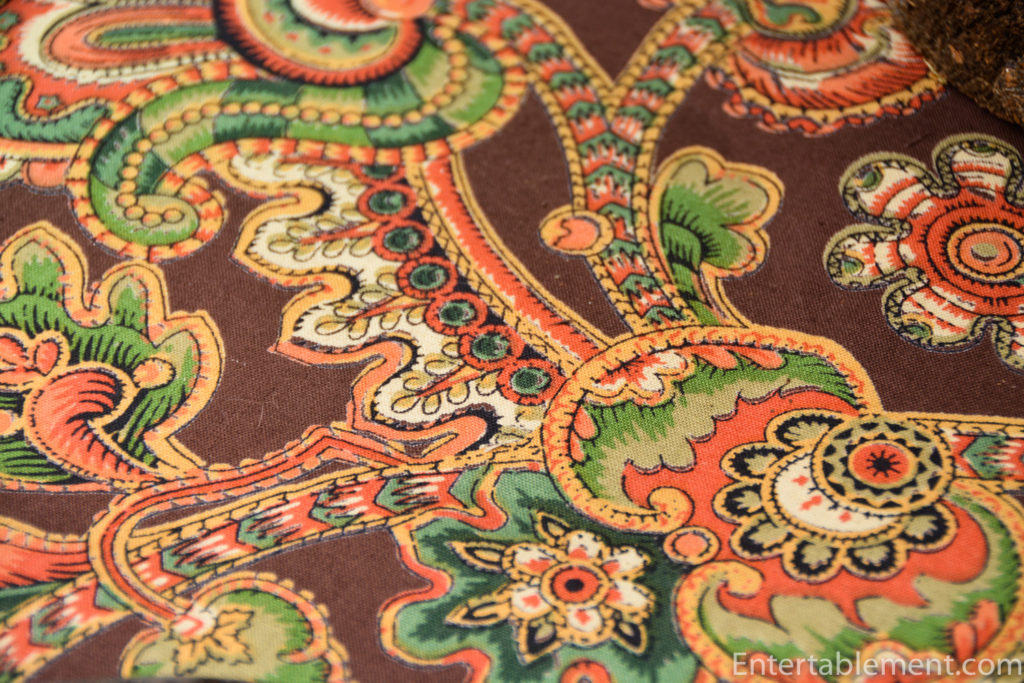 I already had the deep orange napkins from Pier 1, and thought they coordinated better than using the Queen’s Court  paisley napkins, which were unavailable in any event. A happy instance of necessity being the mother of coordination. 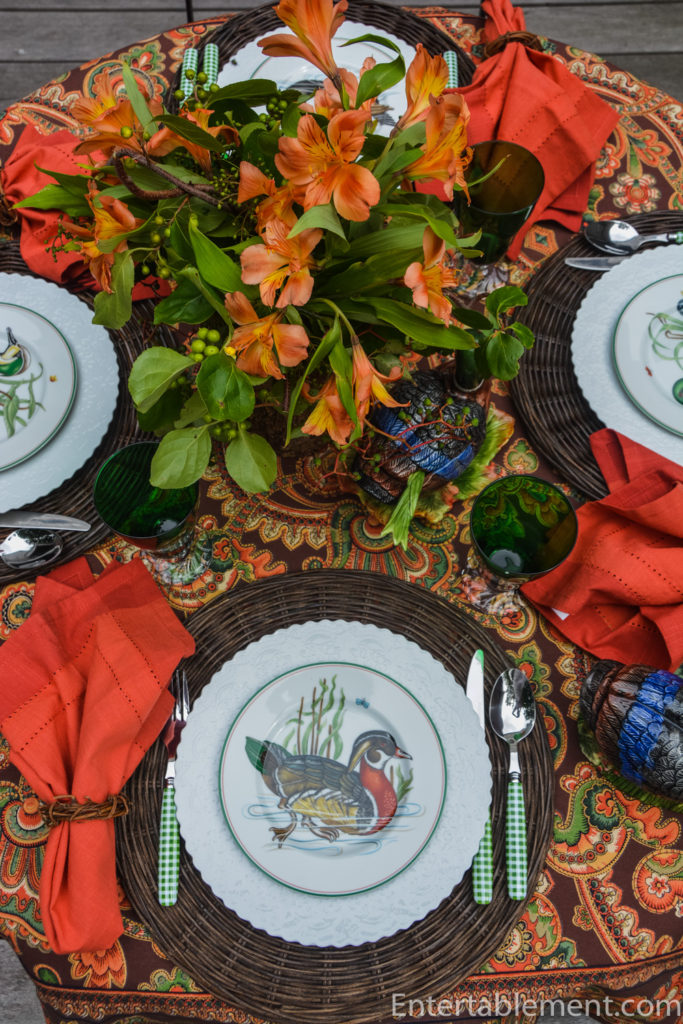 The Southern Living wicker chargers are from Dillards, though they’re quite a bit pricier now than when I bought them. Yikes!  The green gingham flatware was an eBay find. 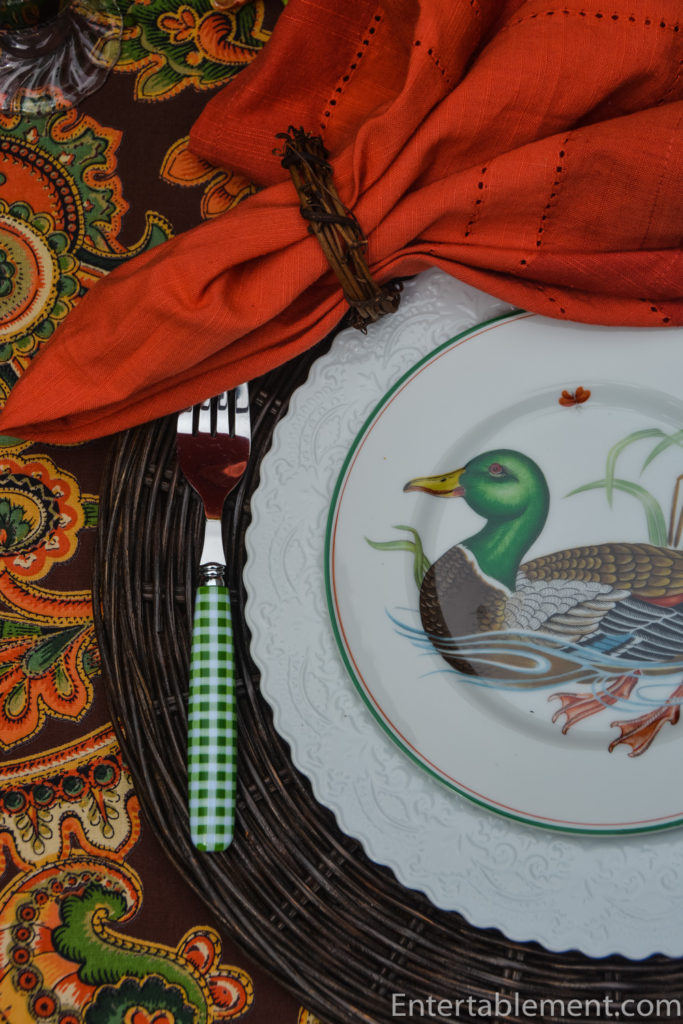 The simple centrepiece of bittersweet vines and orange alstroemeria came together quickly and easily. I used two stacked bark-covered vases to give it a bit of height. 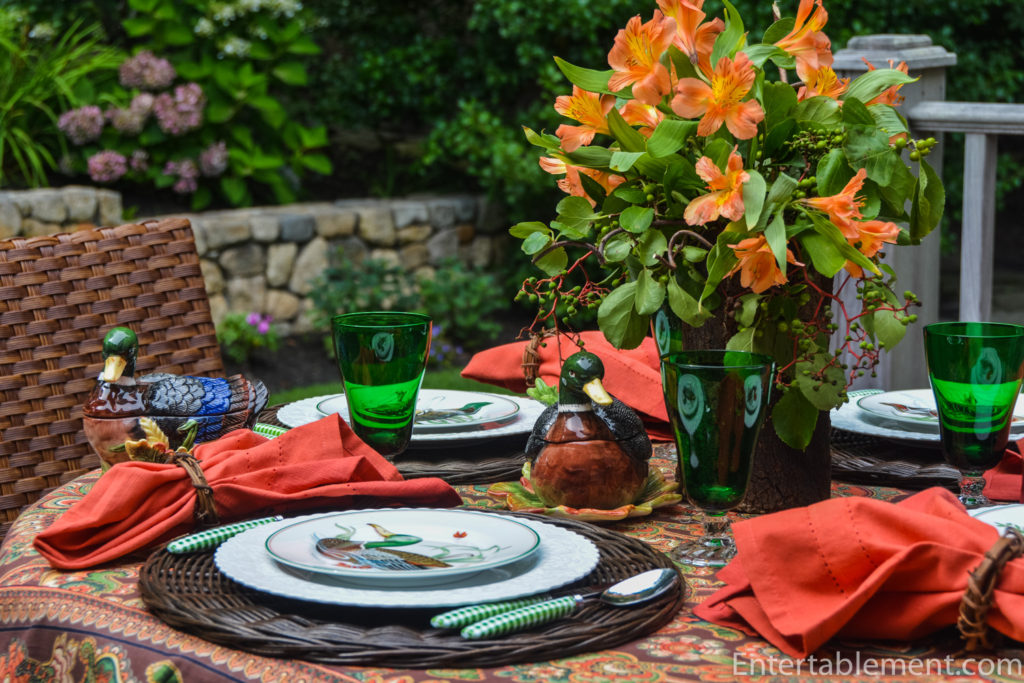 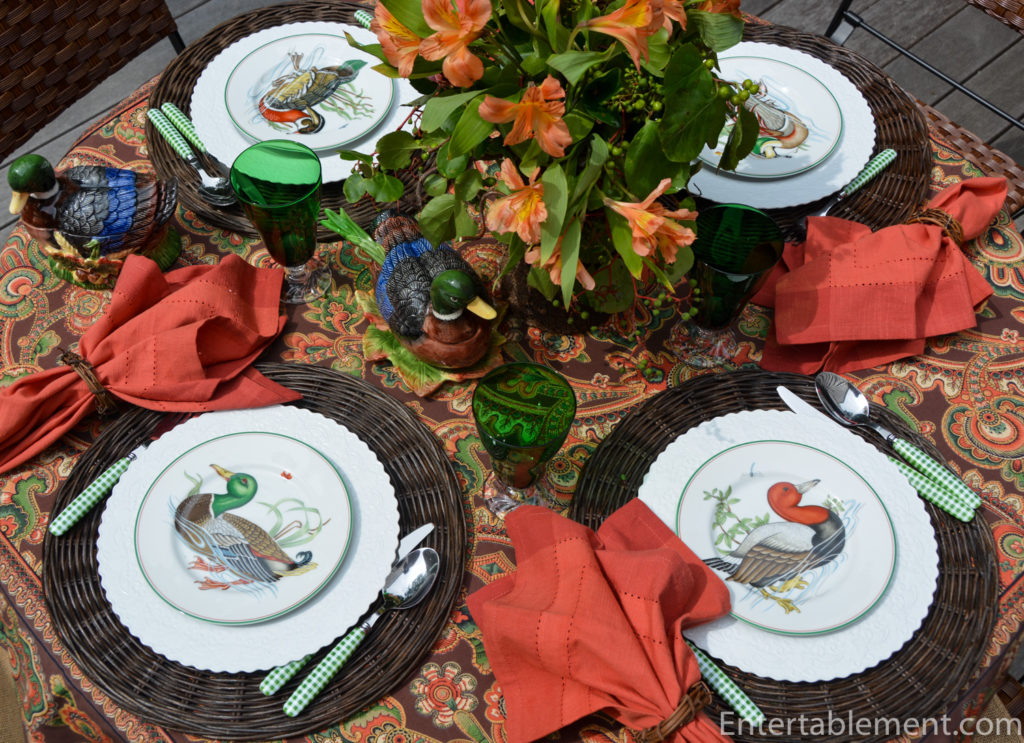 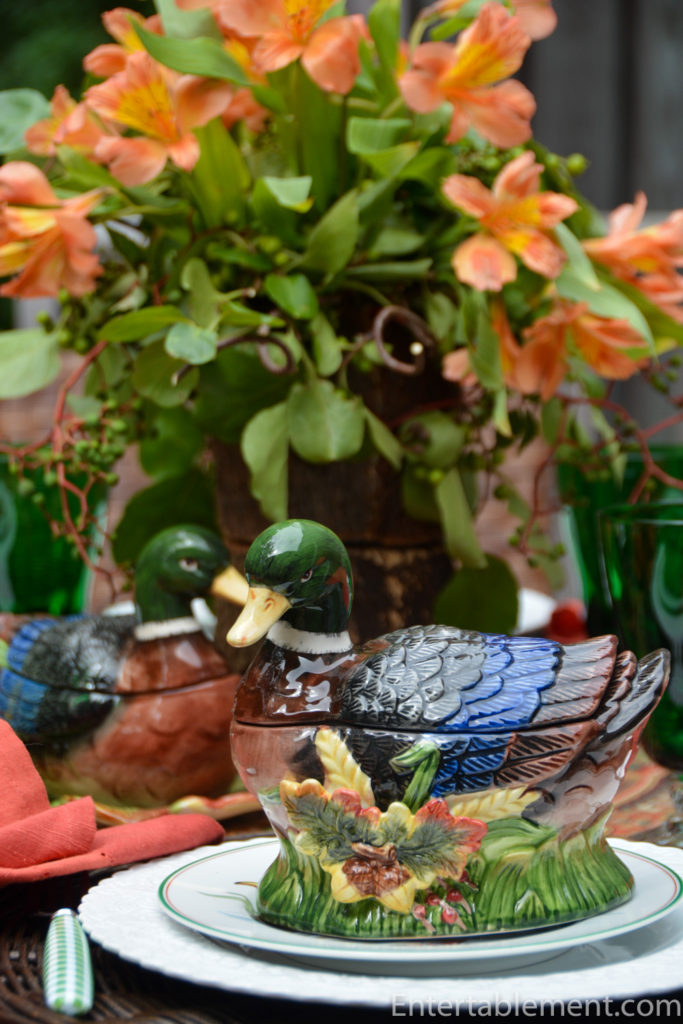