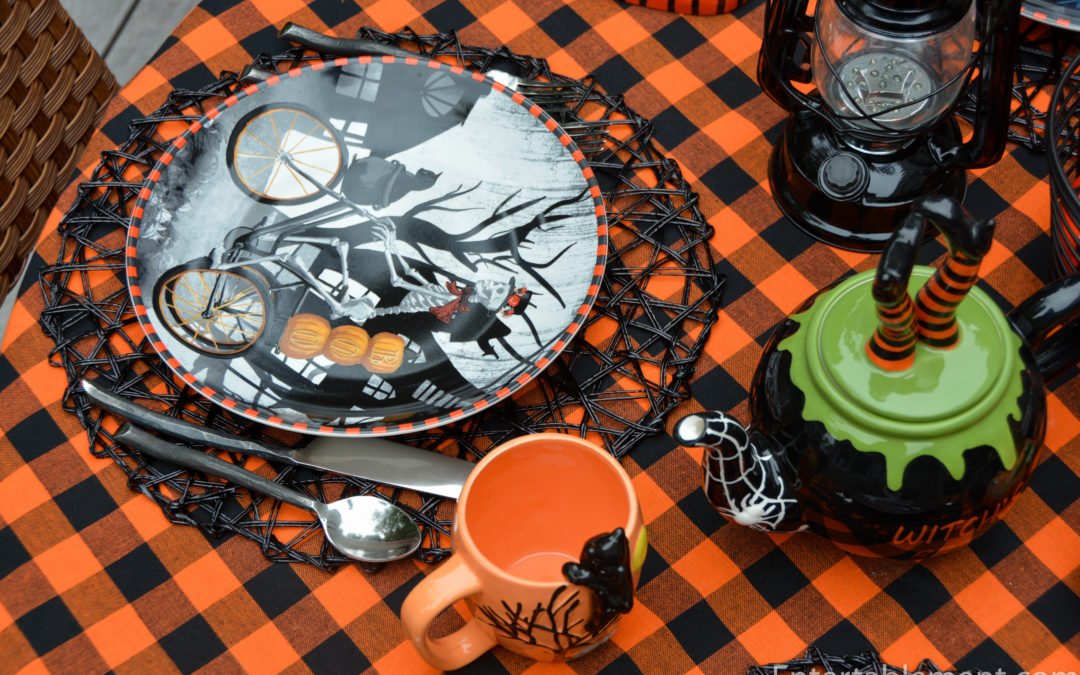 We’ve turned the calendar page to October, so bring on the spooky-ware. 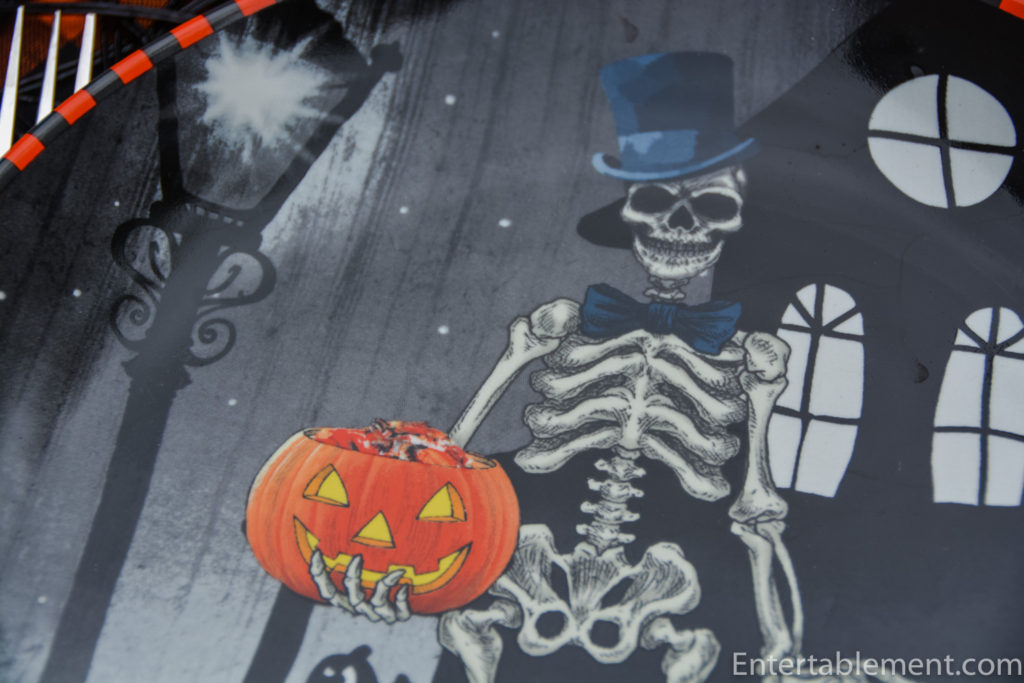 As long-time readers know, I’m not a huge Halloween fan. The sinister and destructive undertones of the holiday make me a bit queasy. I was happy, therefore, to find some quite fun things at HomeGoods last year and put together a Dapper Skeleton table. 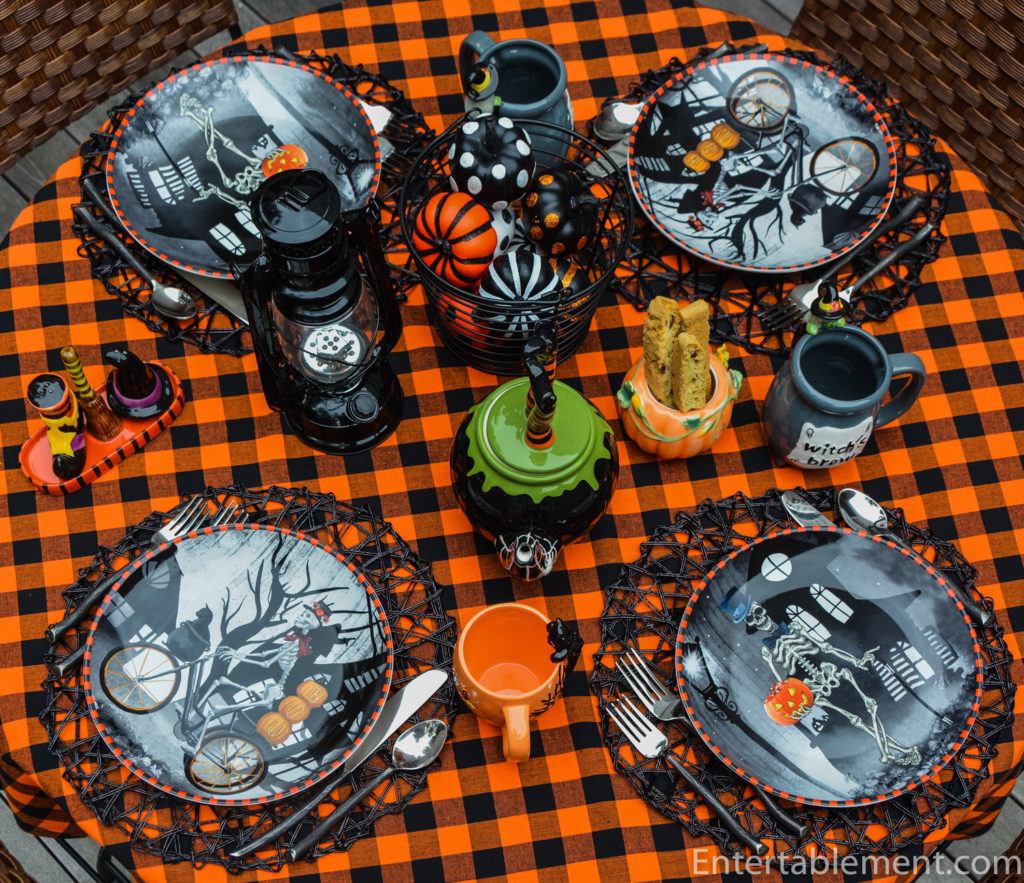 Dapper Skeleton by 222 Fifth, comprises only a few pieces, and I acquired four dinner plates. Replacements calls this one “Bicycle Hers”. I gather the flowers on the hat designate the skeleton as female. 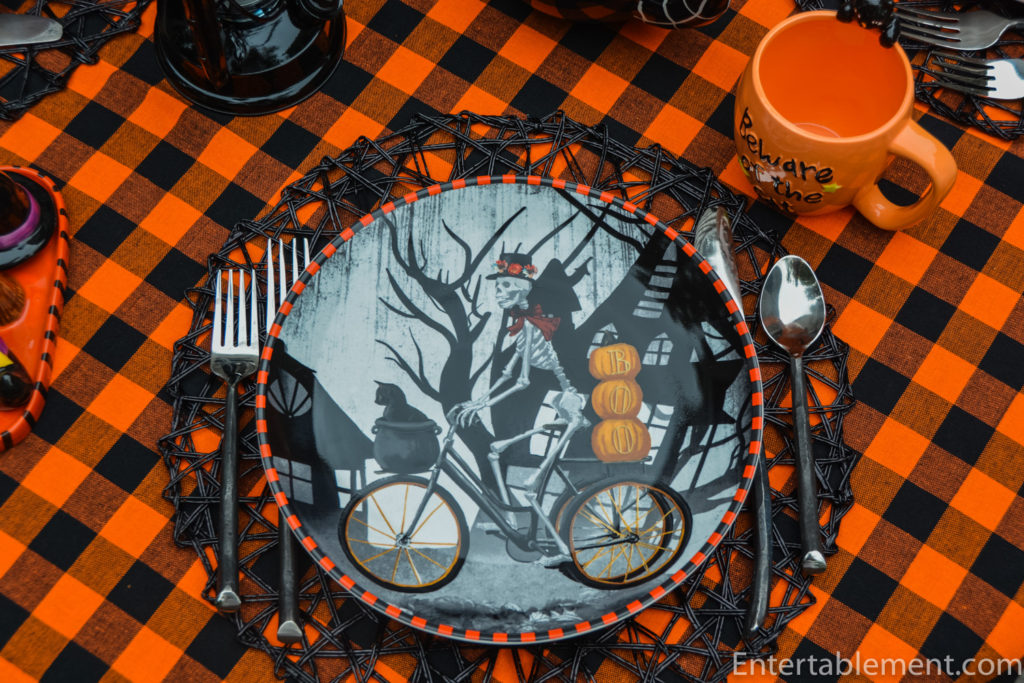 And this one is Skeleton His. 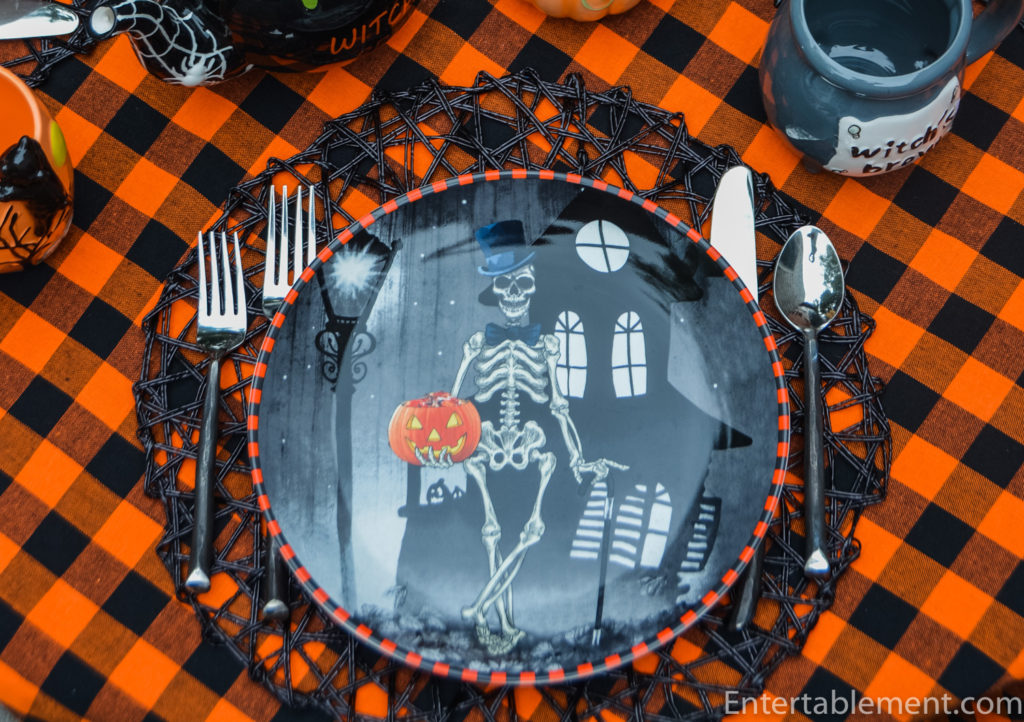 Apparently, there are also Bicycle His and Skeleton Hers. Possibly they were at HomeGoods but I didn’t recognize them. The distinctions are quite subtle. 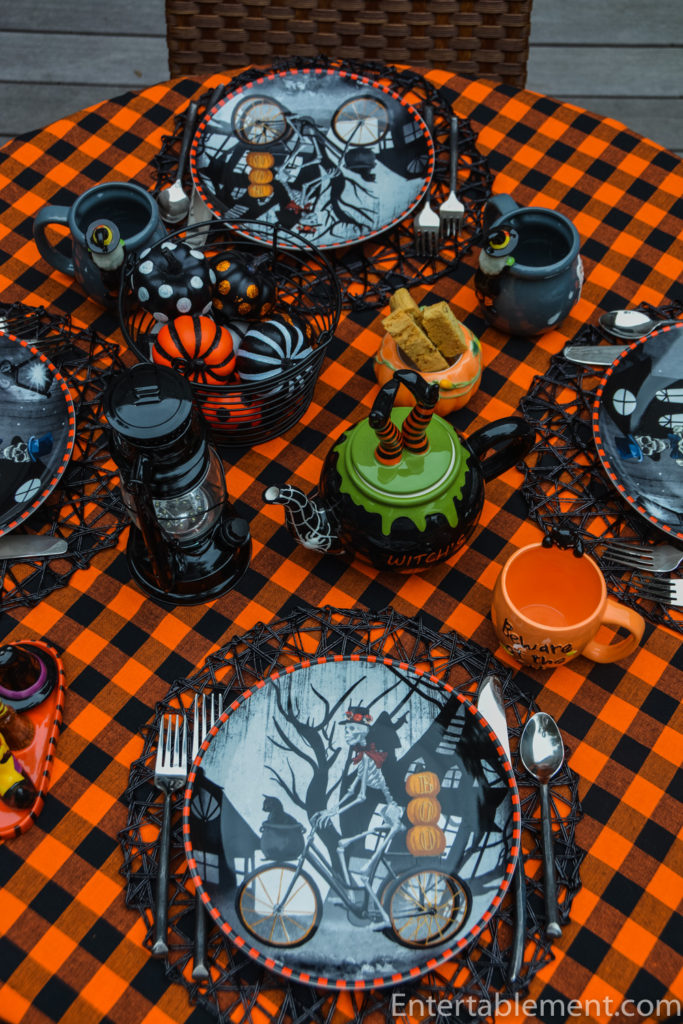 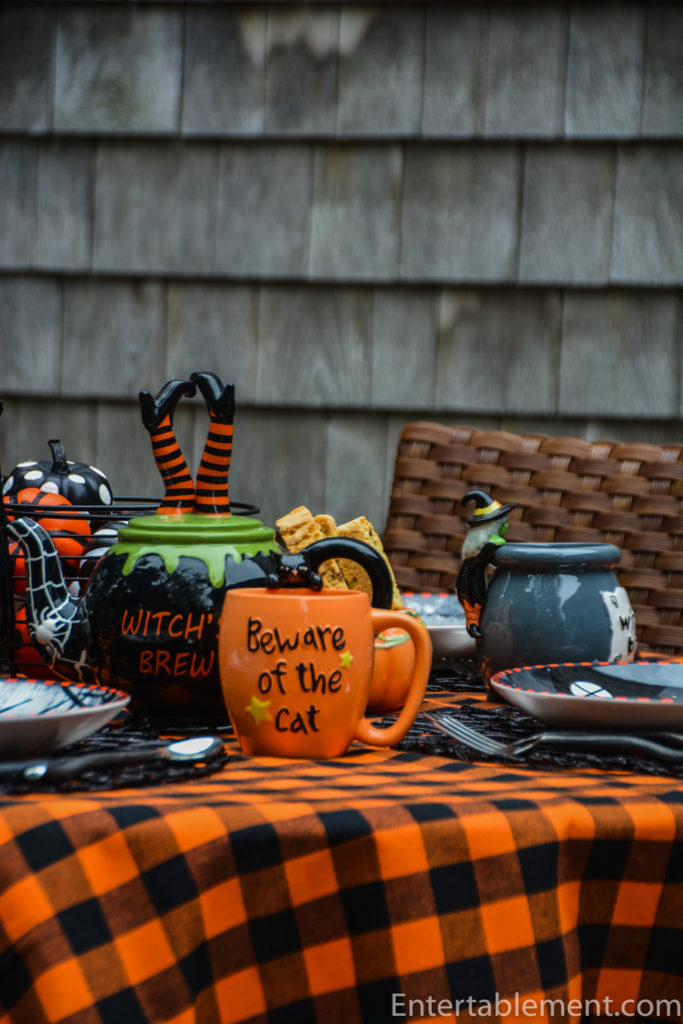 The mugs were a lot of fun, too: a grey Witch’s Brew with a little witch peeking in. 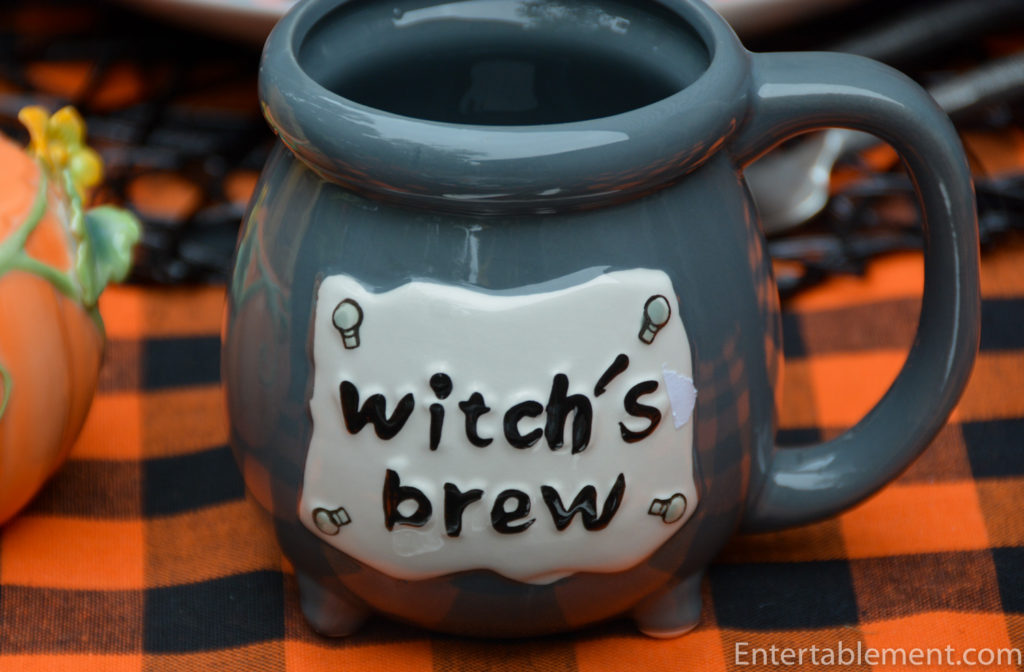 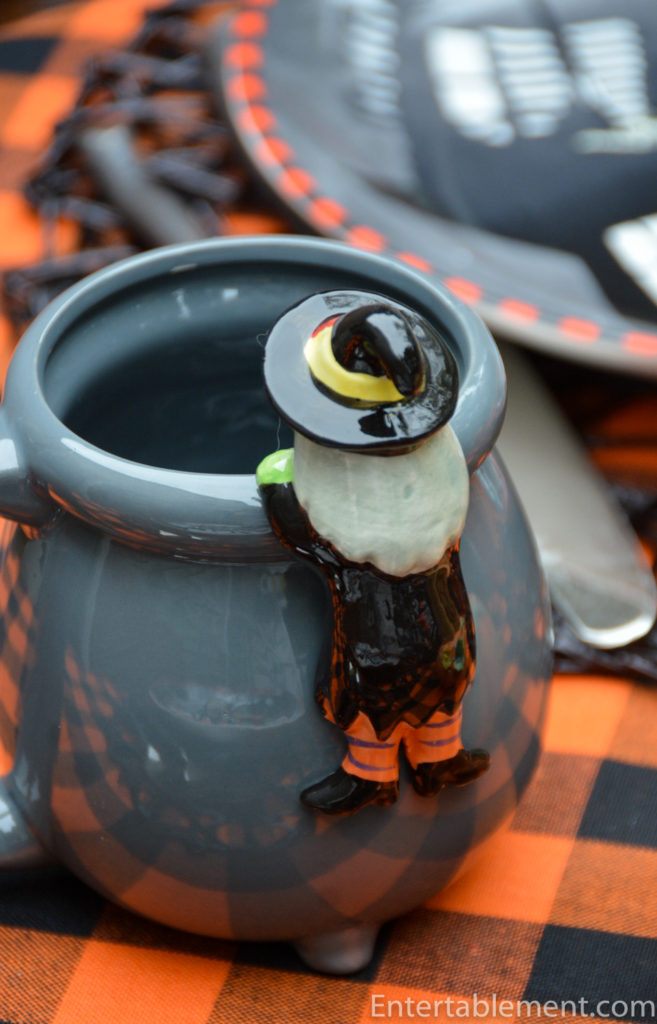 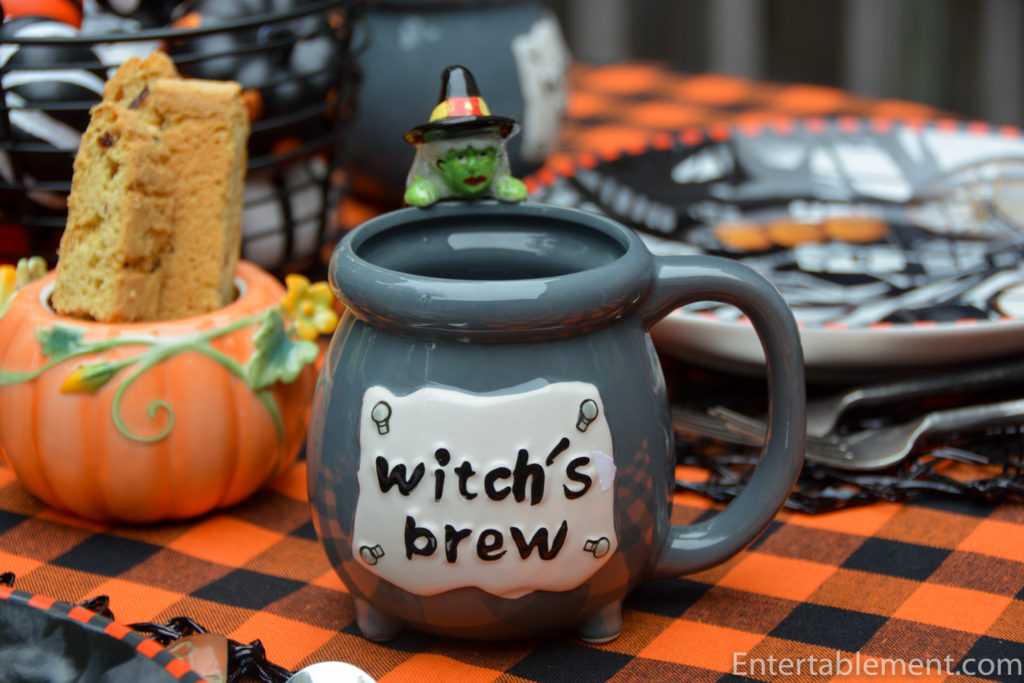 And a cheeky black cat. The mugs made their way to the homes of the granddaughters who delighted in having special mugs for their Witchy Tea during the month of October. 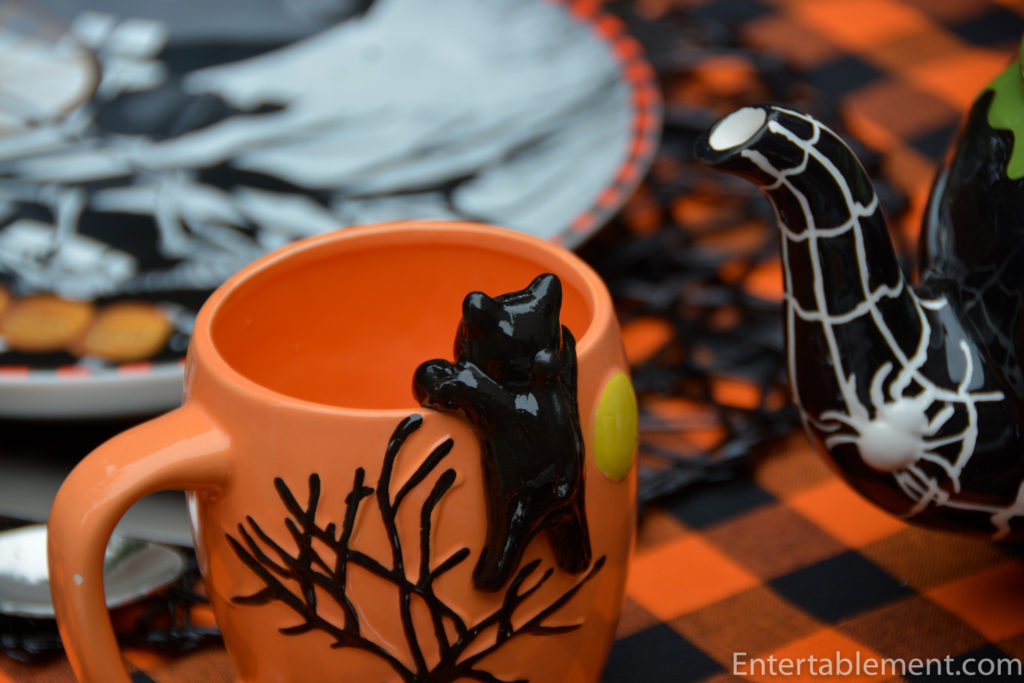 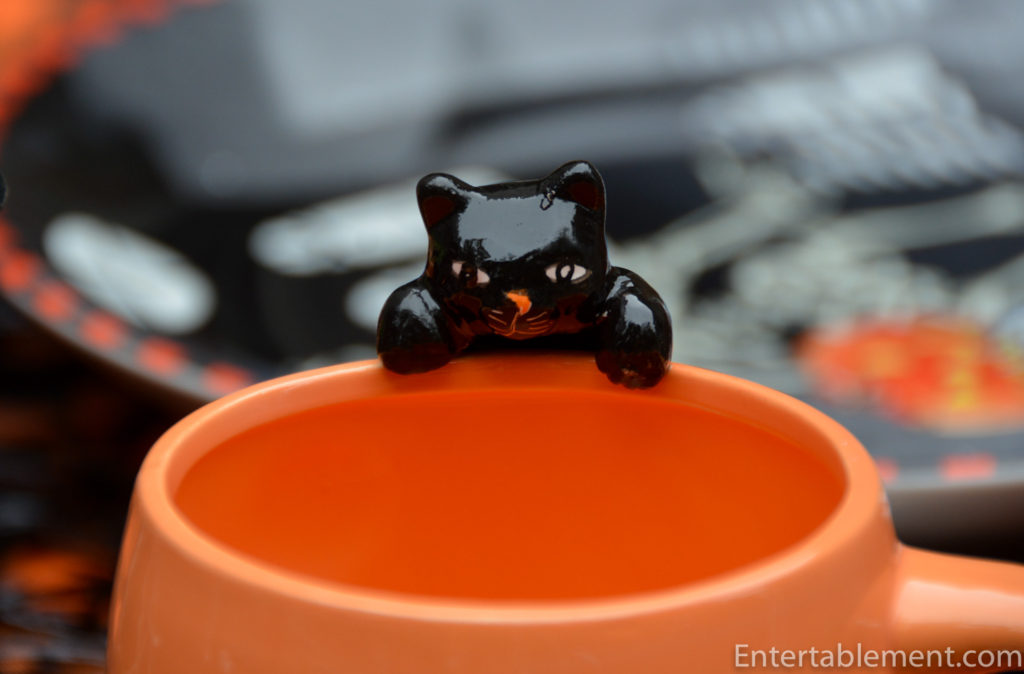 The salt and pepper set is a Pier 1 find. I’m sure it will get lots of use over the years. 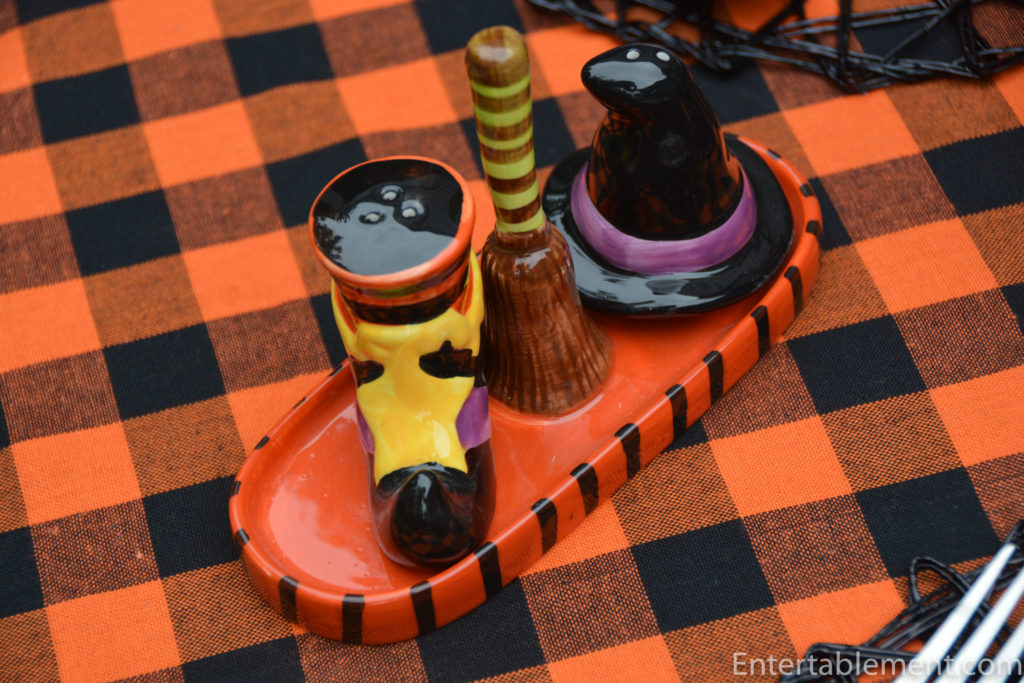 A witch’s hat and her tip-toed shoe. Traditional Halloween garb. 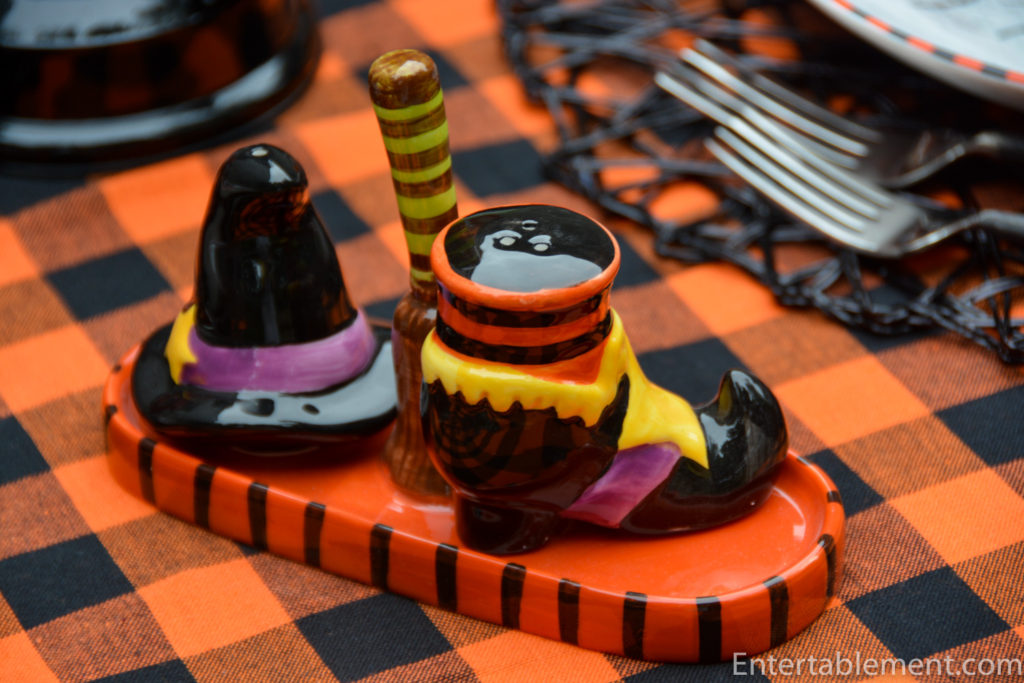 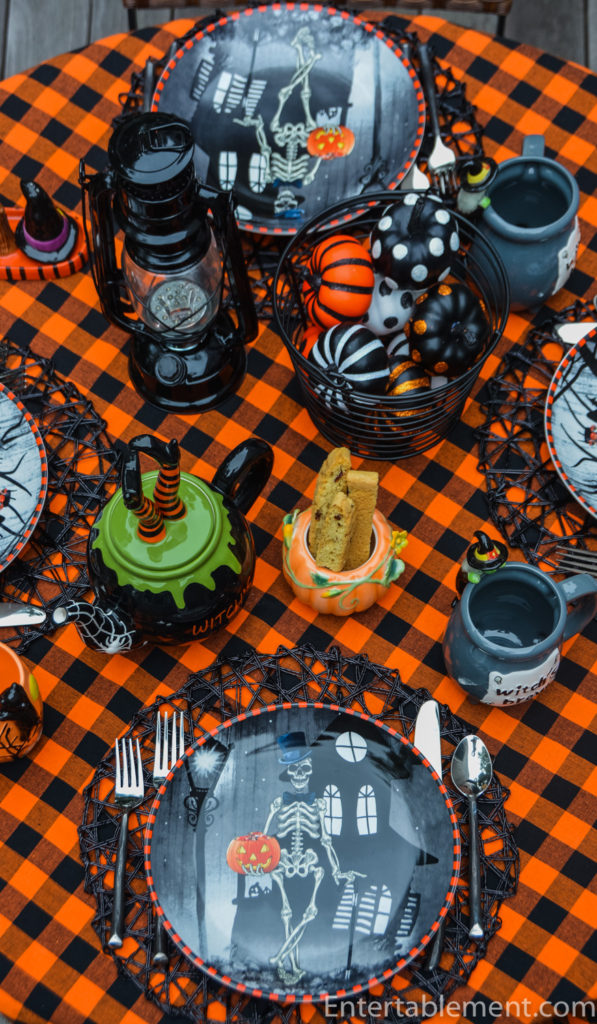 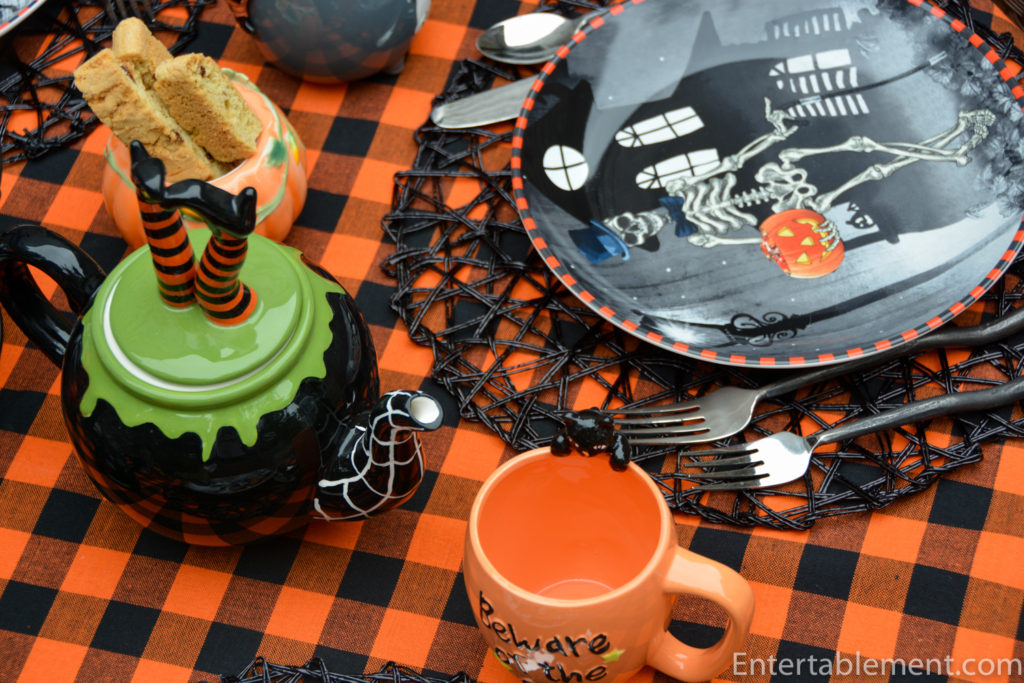 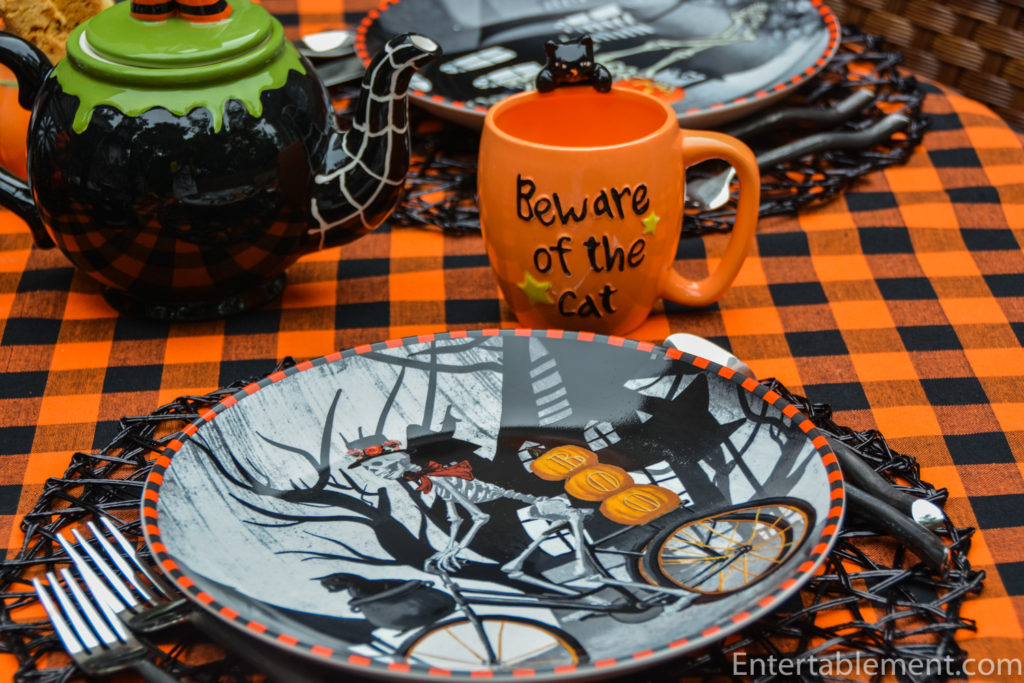 Patterns by 222 Fifth are inexpensive, yet often have really wonderful details such as the darling little cat in the cauldron on the front of the bike. Note the spiderwebs dangling from the hands of the skeleton. 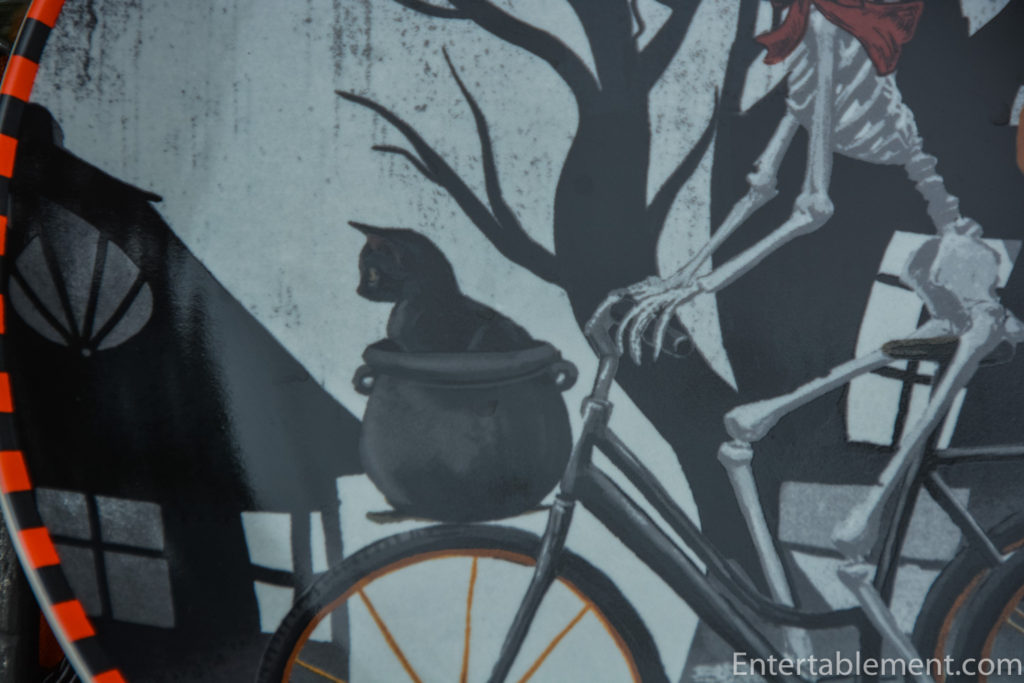 The BOO letters on the pumpkins look like they’ve been carved into the pumpkins, and the wheels of the bicycle are picked out in orange. The orange and black pattern around the rim of the plate is more attention to detail. Good job, 222 Fifth. 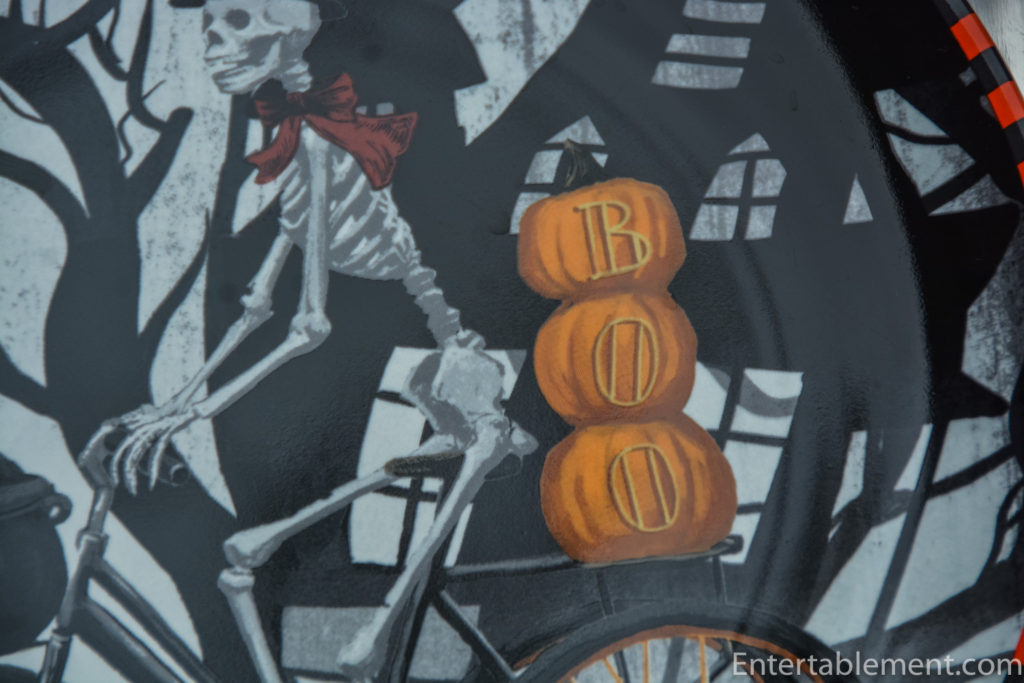 The placemats and table cloth were also from HomeGoods. The basket full of polka-dot and striped pumpkins were from Pier 1. 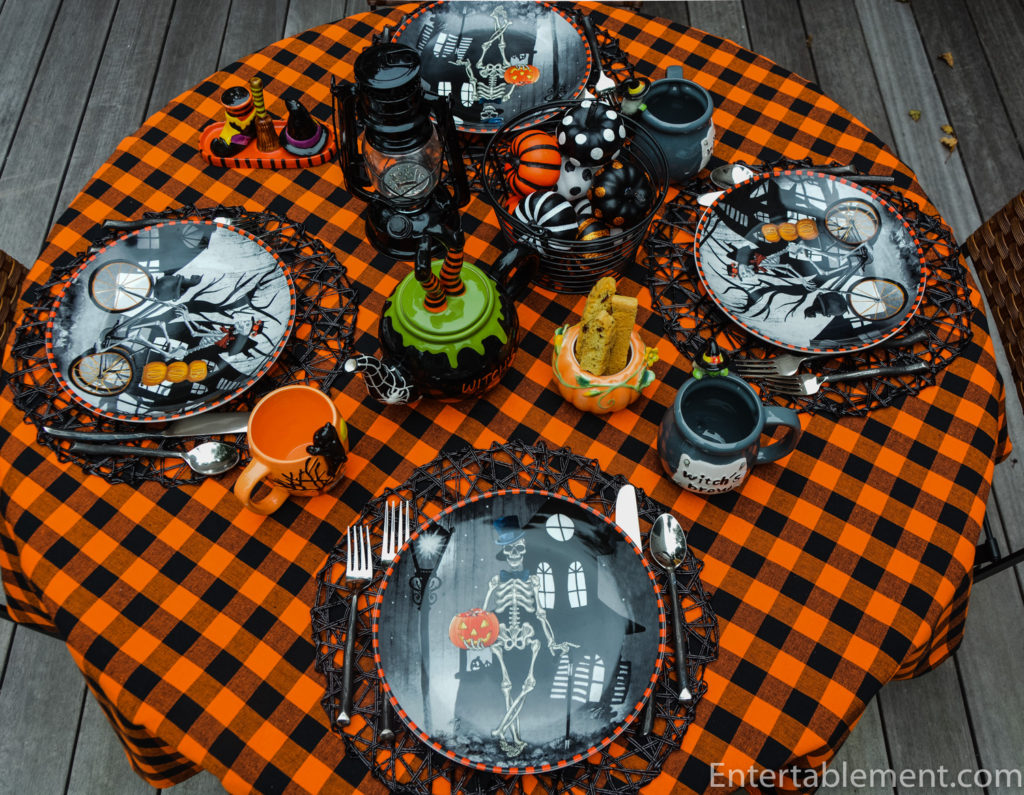 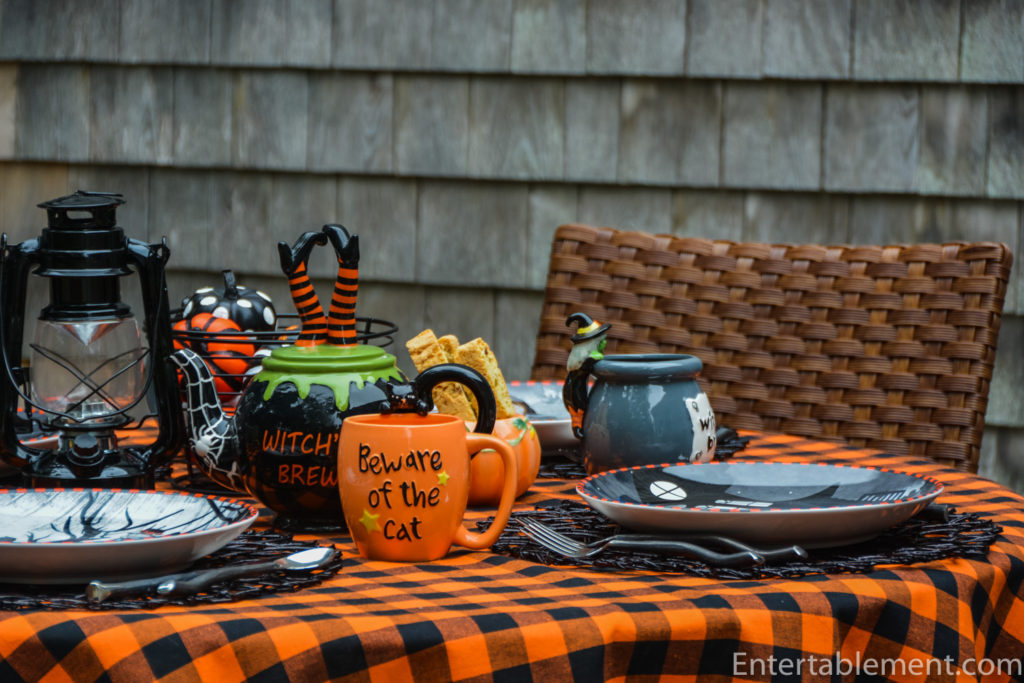 I’m sharing this post with Between Naps on the Porch,