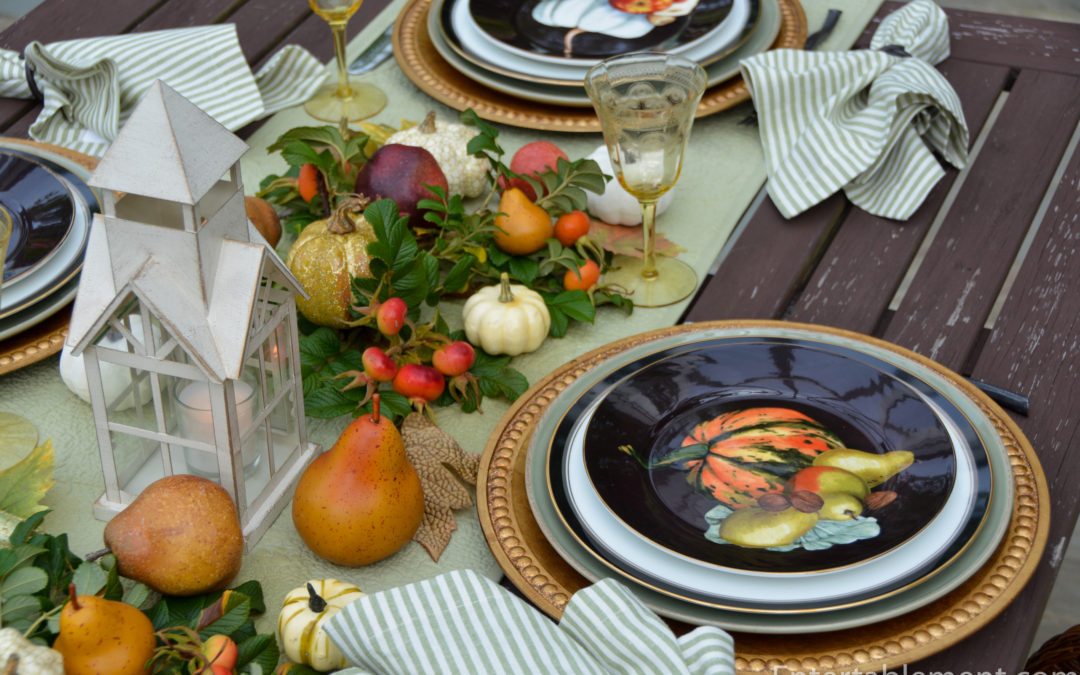 Adjusting to a six-hour time change and weather whiplash has left me a bit discombobulated. A little over a week ago I was scarfing down pasta in Rome in blissful mid 70s temperatures. Monday of this week saw me boarding a flight to Omaha (for my “real job”) where I was dismayed to discover it was snowing. And no, I was not properly dressed for it. It had been in the mid-60s when I left Canada. OK. That’ll teach me to assume going further south would be as warm, if not warmer. Go figure. 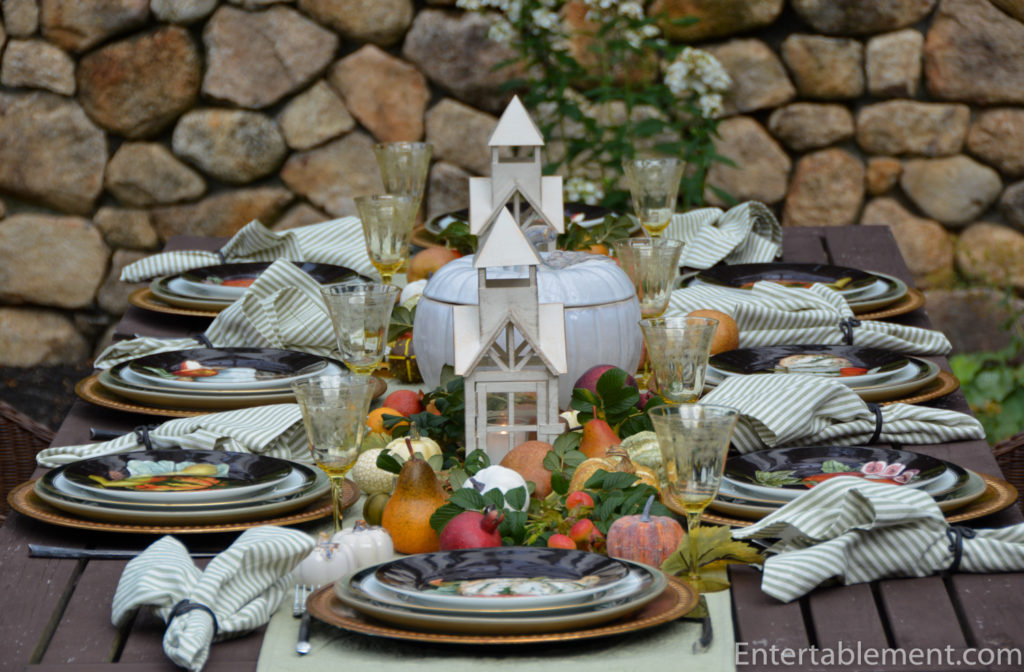 Glenn manfully handled the trick or treaters while I was attempting to return to Canada via Chicago, which had been buried earlier that day with several inches of snow. Thankfully, after many delays, our flight made it into Toronto just before 1 am on Friday and I tumbled into bed around 2:30 am. All this is to say I’m a bit behind but starting to be counted among those present. The extra hour of sleep from the return to Standard Time last night has helped. 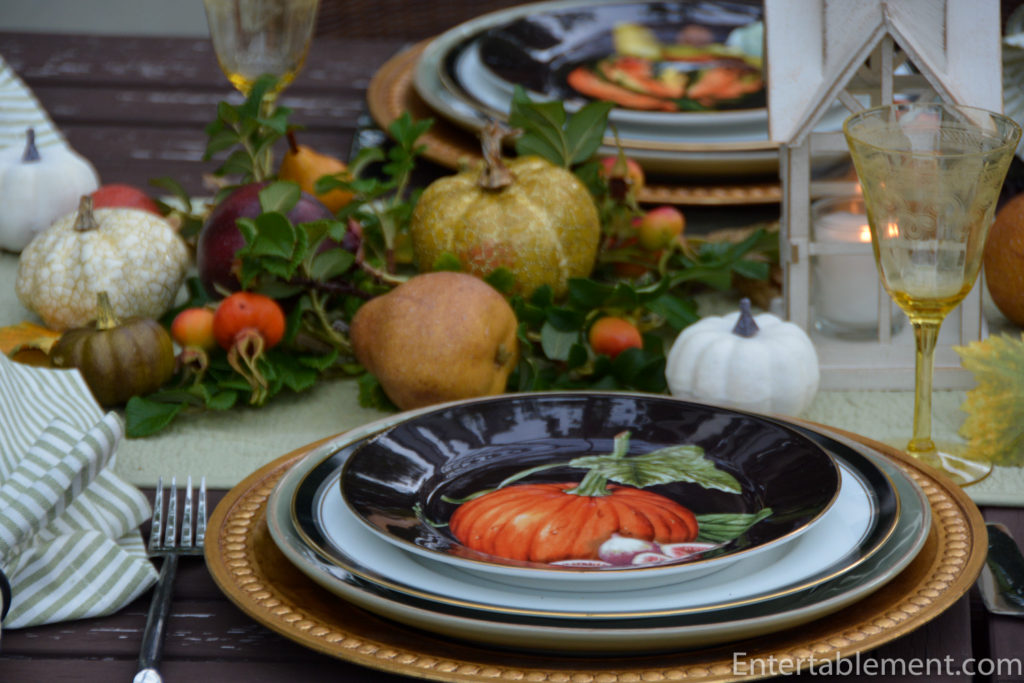 To the table! I shot these pics in August before we left the Cape. A combination of beach rose hips, Pier 1 pumpkins and silk leaves made an exuberant fall centrepiece. 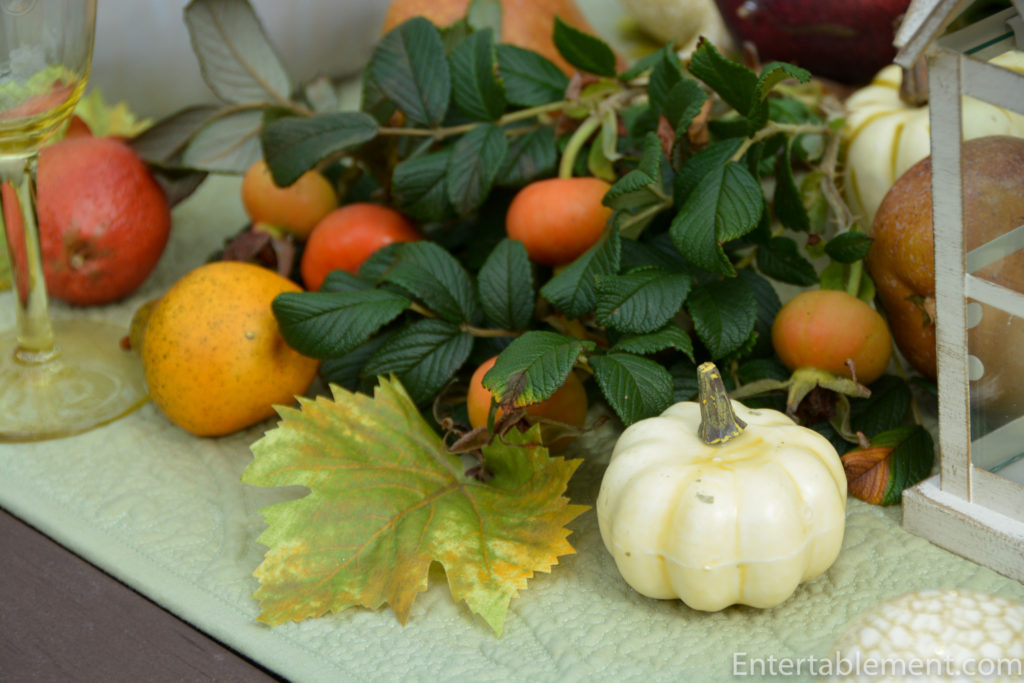 I threw in some faux pomegranates and pears for good measure. 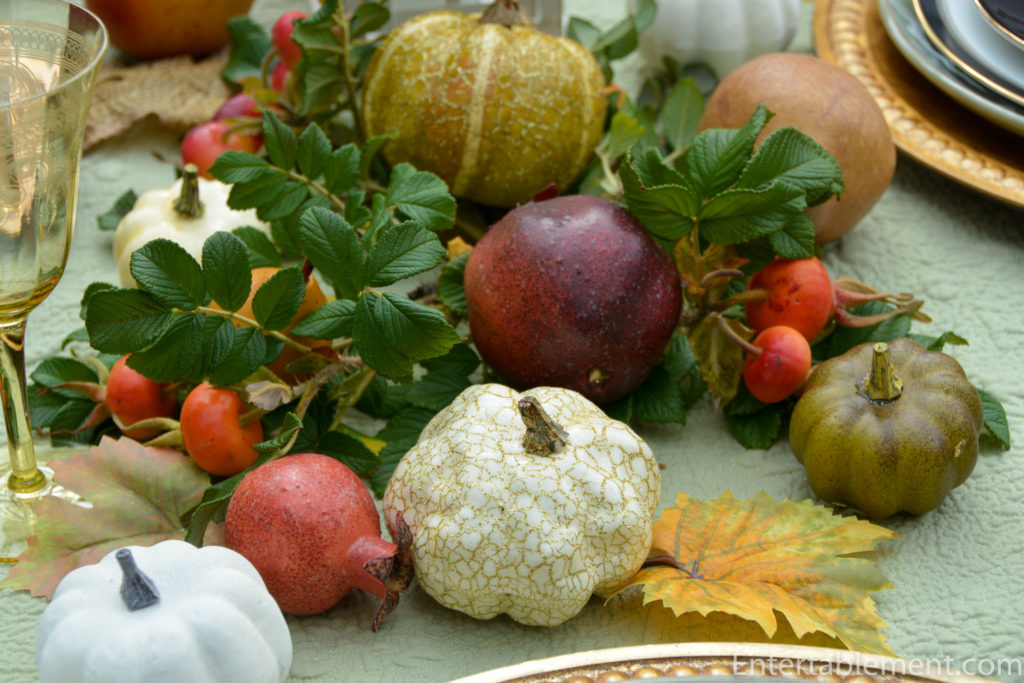 It does the trick, don’t you think? 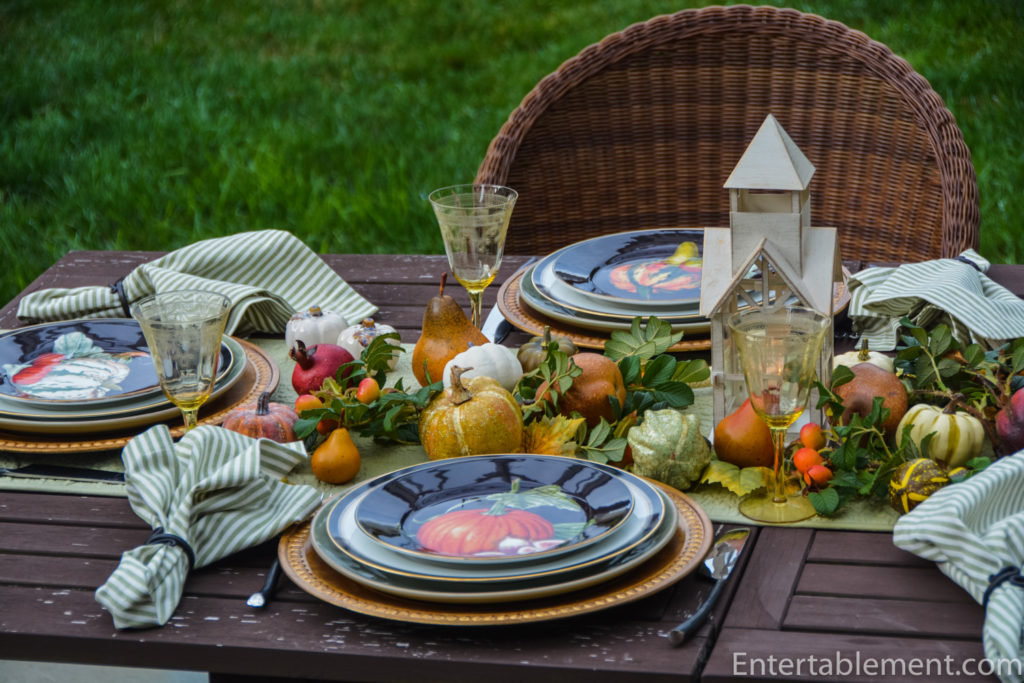 The Harvest Pumpkin salad plates are from Williams Sonoma last year. Black background plates draw me like a magnet, and these reminded me of a Dutch Master’s painting. It looks like you could reach in and snack on one of those luscious figs. 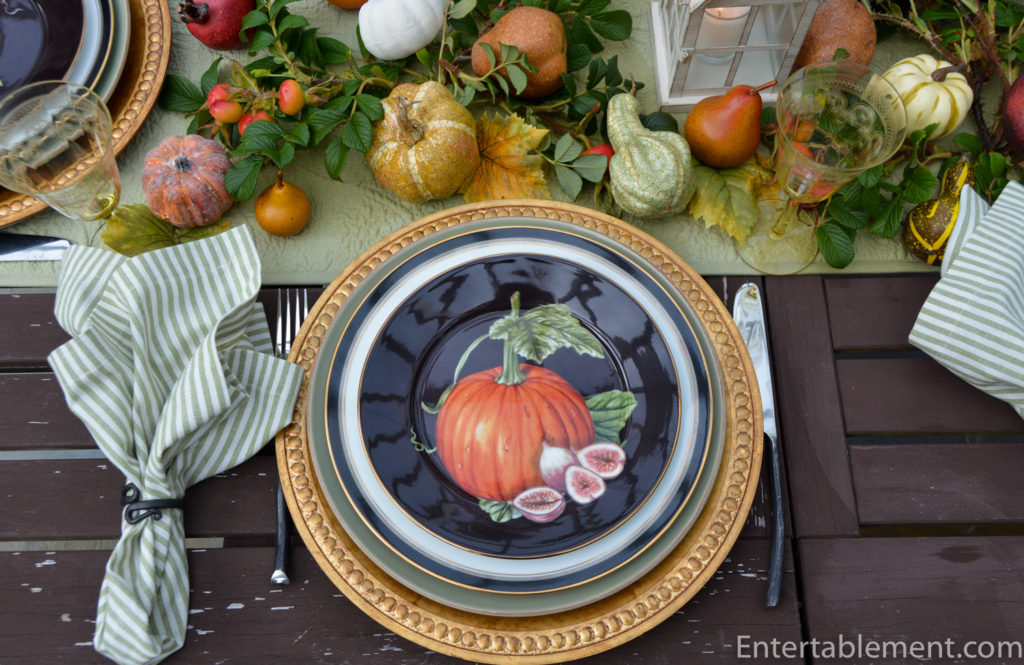 The pumpkins are beautifully rendered and capture the essence of fall. 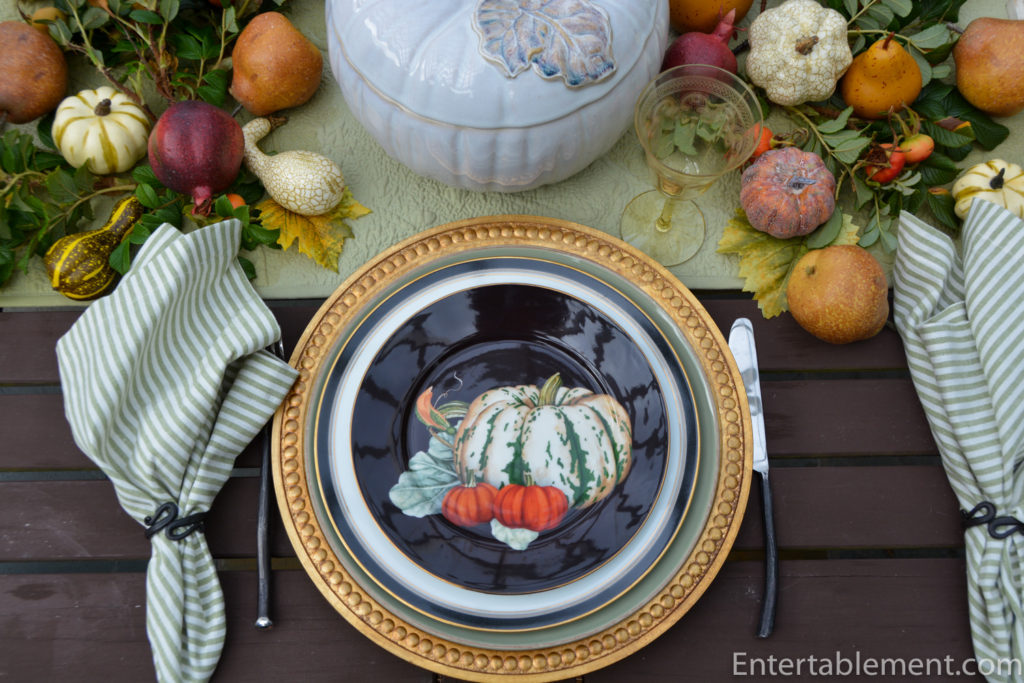 There are four different plates; two with orange pumpkins and two white. 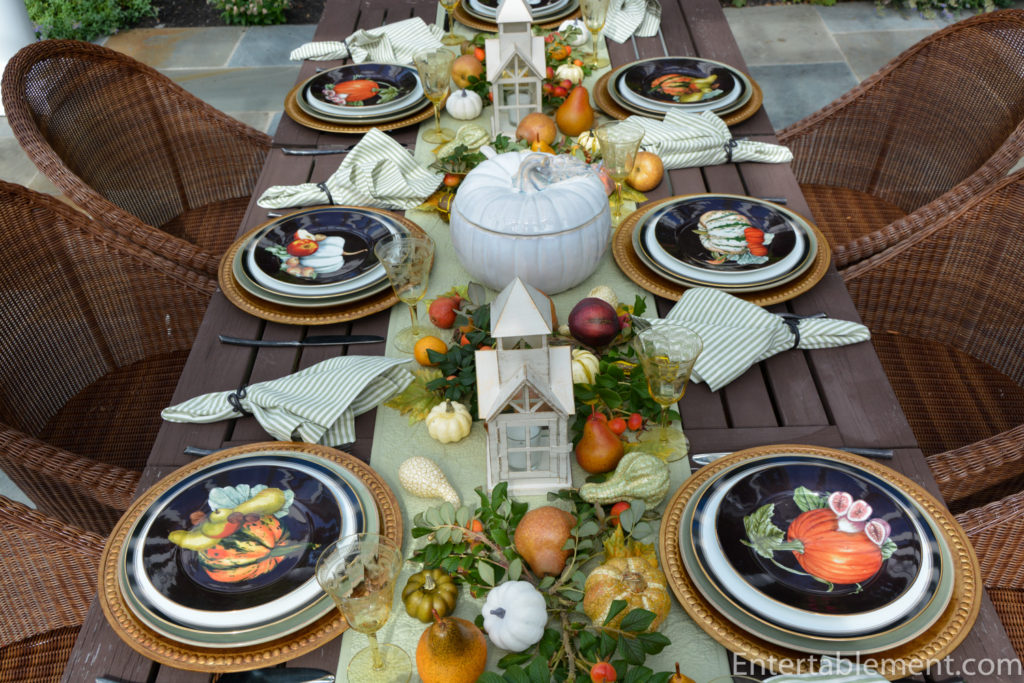 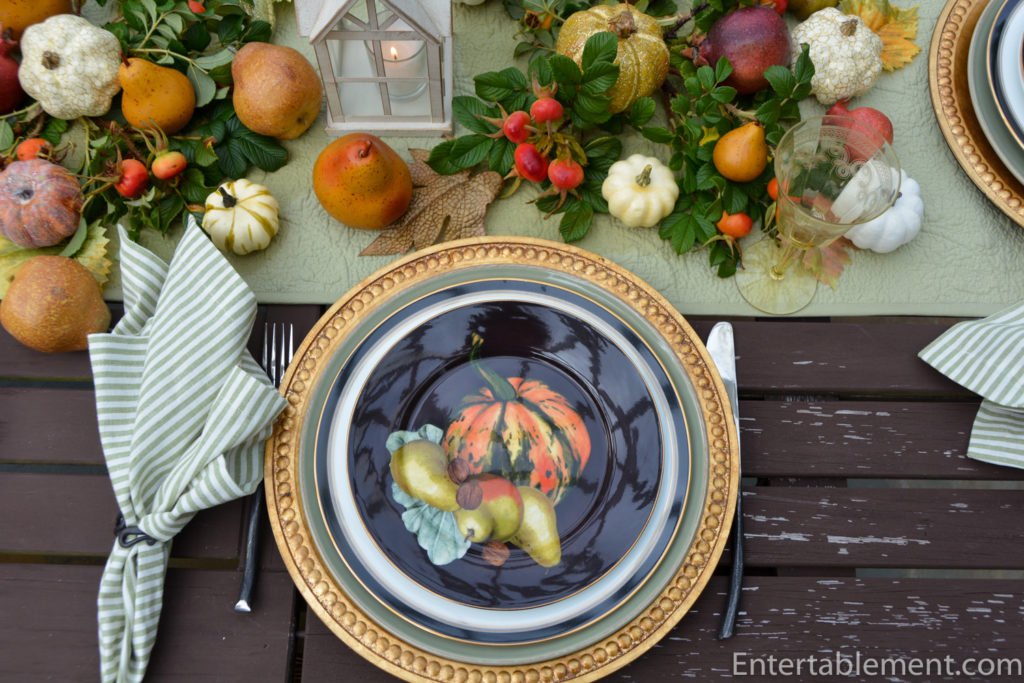 For whatever reason, I have only this side shot of the second white pumpkin plate. But you get the idea! 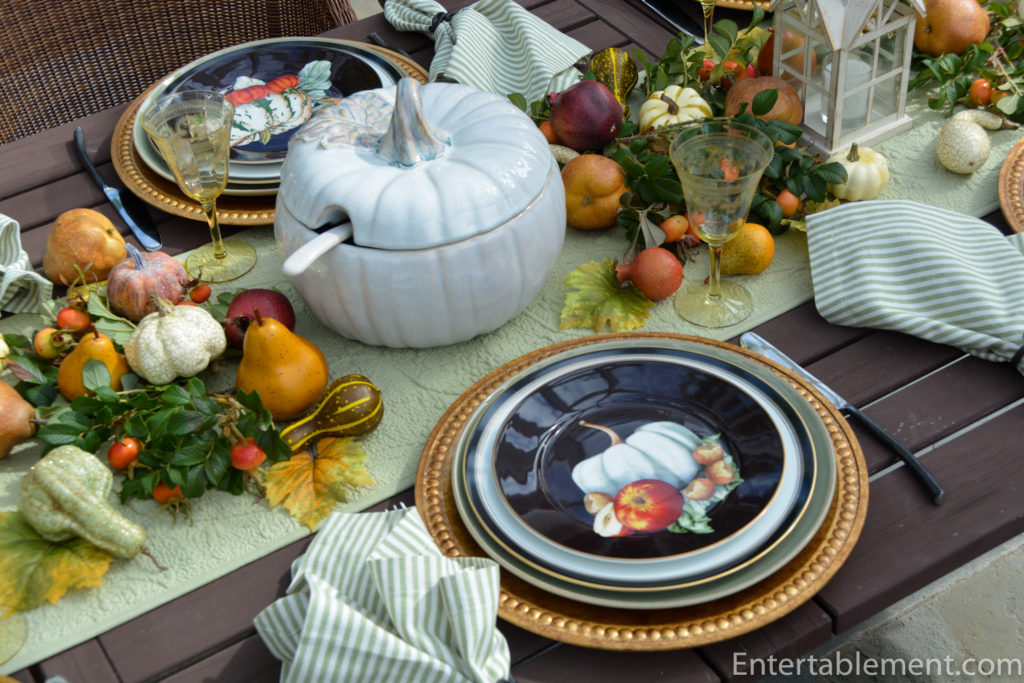 We have Pier 1 to thank for the white pumpkin tureen, salt & pepper shakers, and the “house lanterns”, all from a couple of years ago. 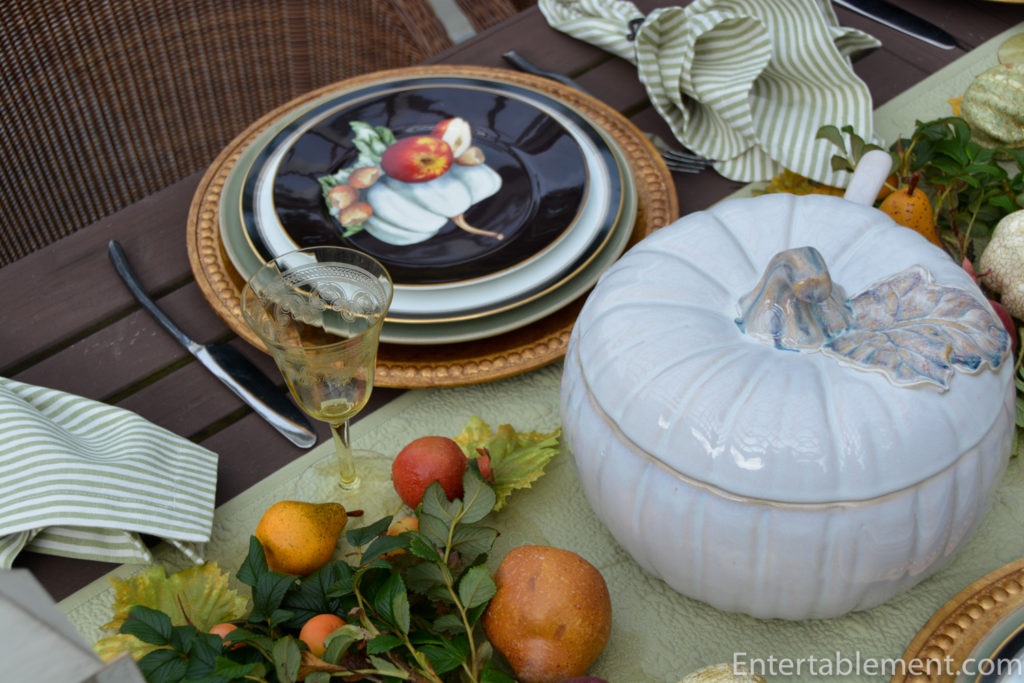 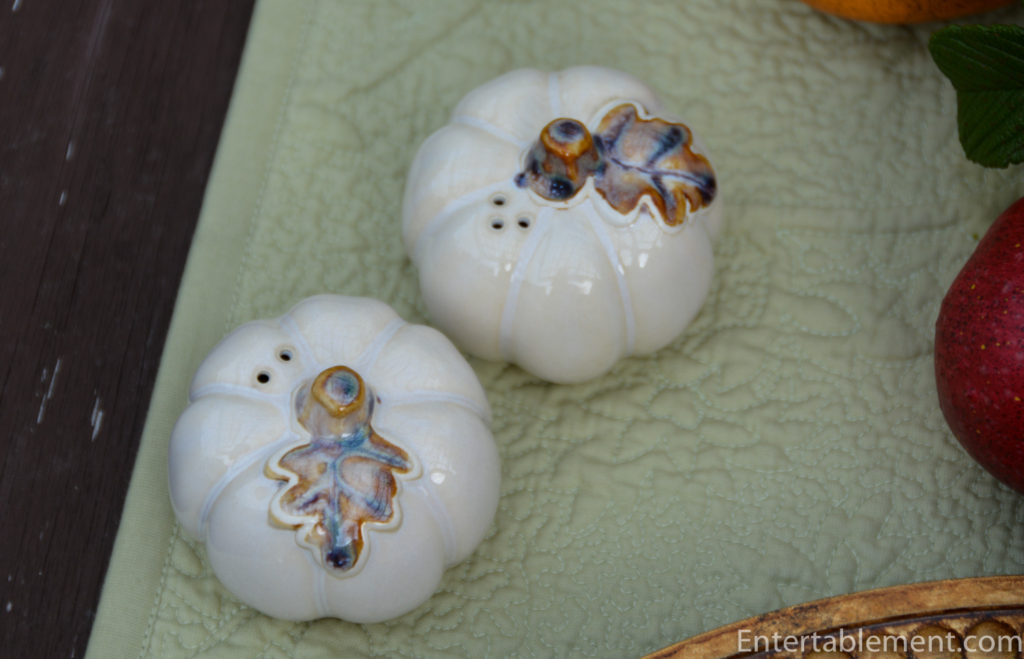 The house lanterns came in both large and small sizes. Only the small ones are here, but you can see all three on the Green Gingham Appetizer Plates table from the spring of 2018. 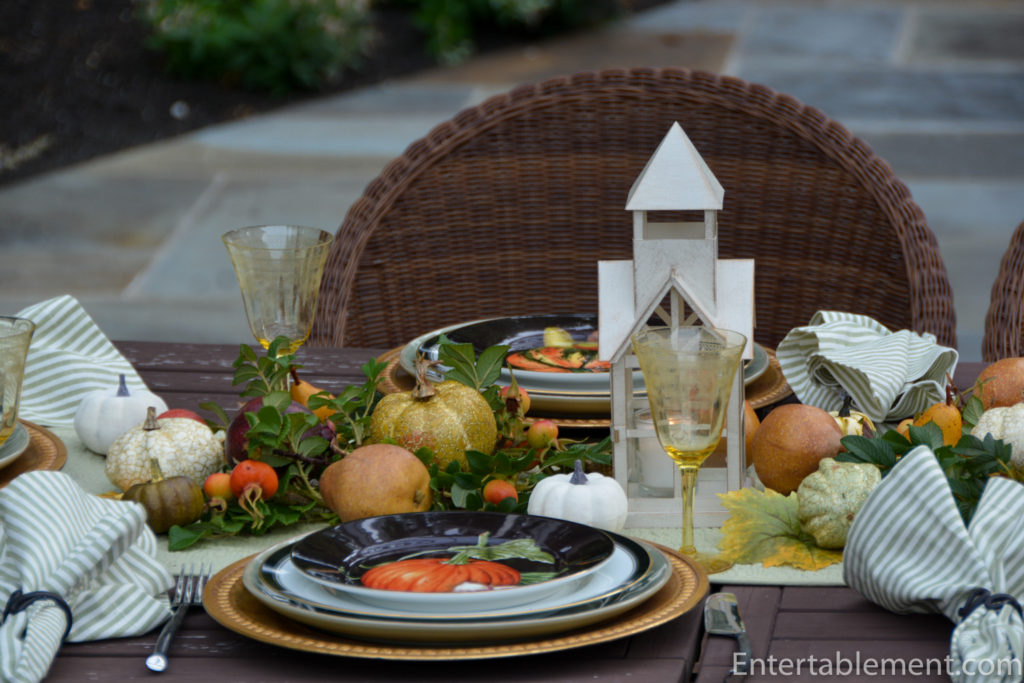 I used an abundance of plates to get the balance right. Pottery Barn was the source for the gilt beaded chargers and the Celadon Cambria dinner plates.  Royal Prestige Nocturne black-rimmed dinner plates are the final layer before the Harvest Pumpkin salad plates. 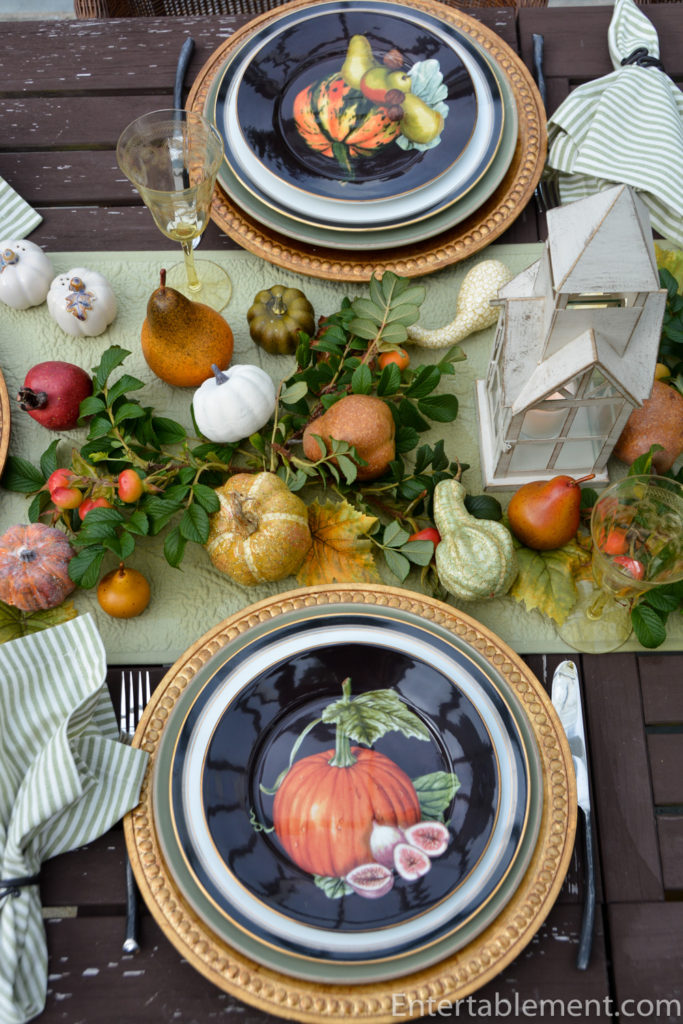 It’s one plate more than I usually use, but I found the extra bit of sage green looped in the Vine Boutis runner from Williams Sonoma and the Cactus Green Wheaton striped napkin from Williams Sonoma. The black Twig flatware and Fiddlehead napkin rings are from World Market and balanced the weight of the black background on the salad plates. 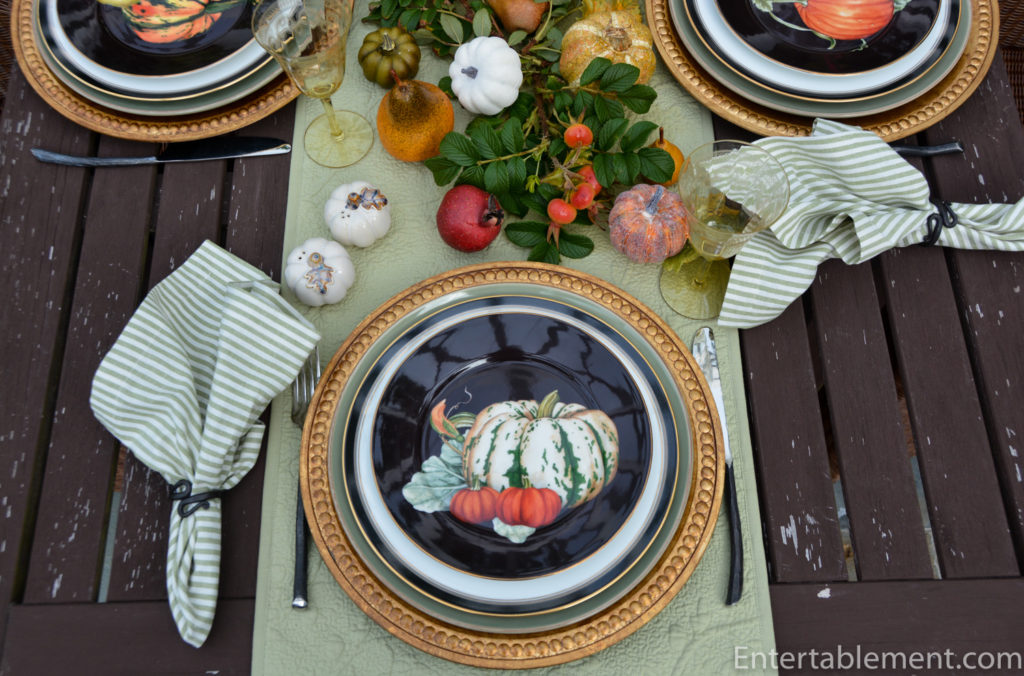 The Tiffin Franciscan vintage Depression glasses are beguilingly named 14196-11 Amber by Replacements. 🙂 I’d never seen the pattern before, and haven’t found any more of it. Replacements had the water glasses only, and I discovered them while fishing for Julia Amber Stemmed glasses, also by Tiffin Franciscan. 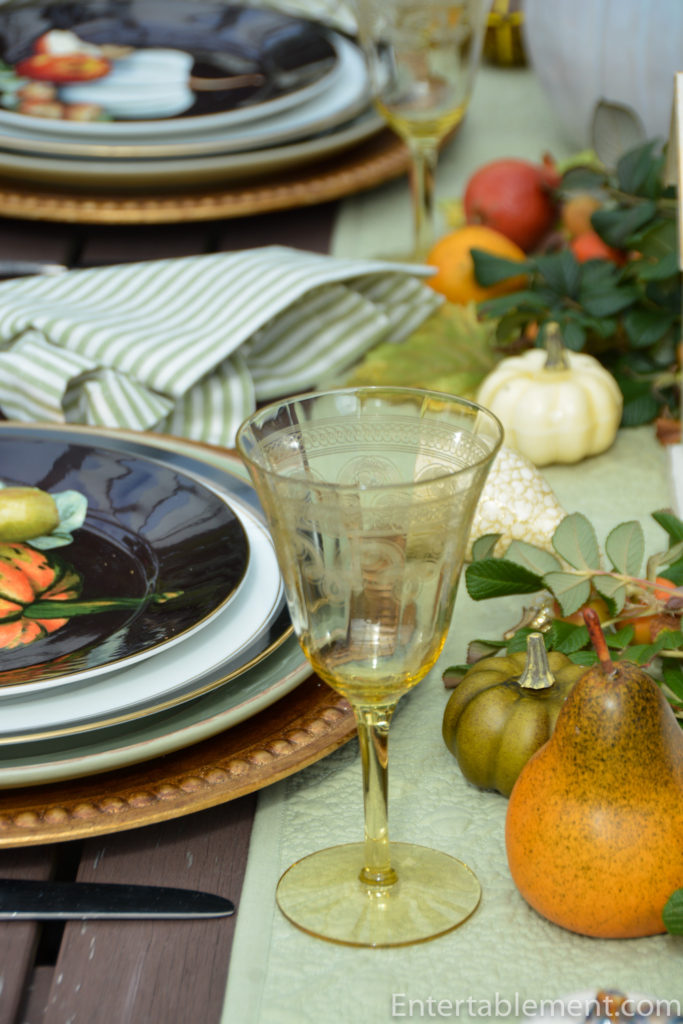 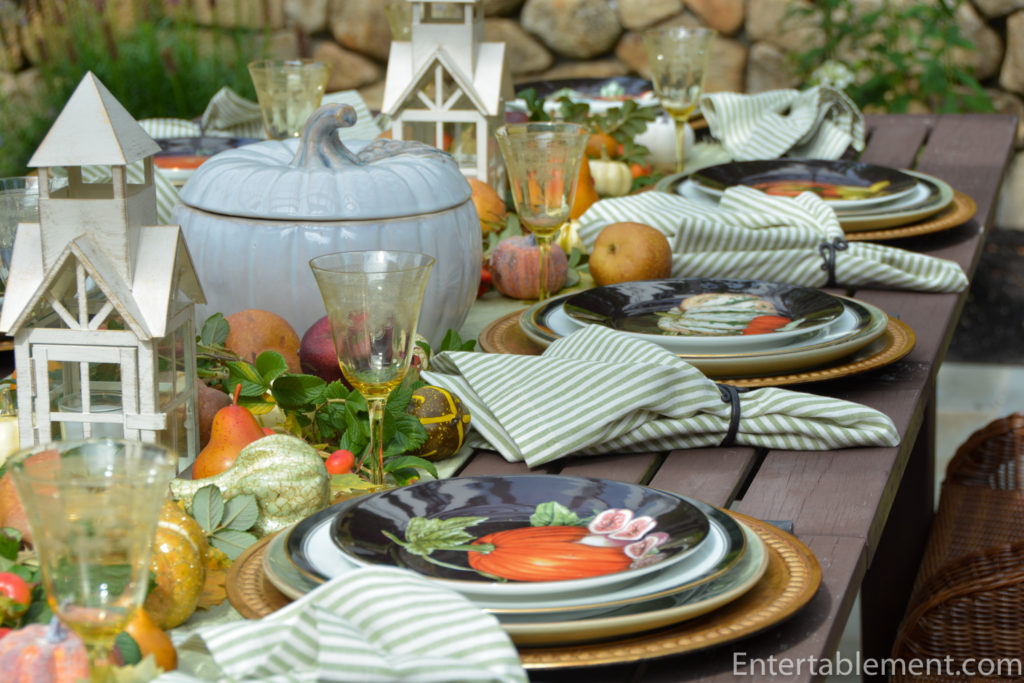 Seeing that expanse of green grass makes me long for warmer weather. Yikes – the cold stuff has only begun!! 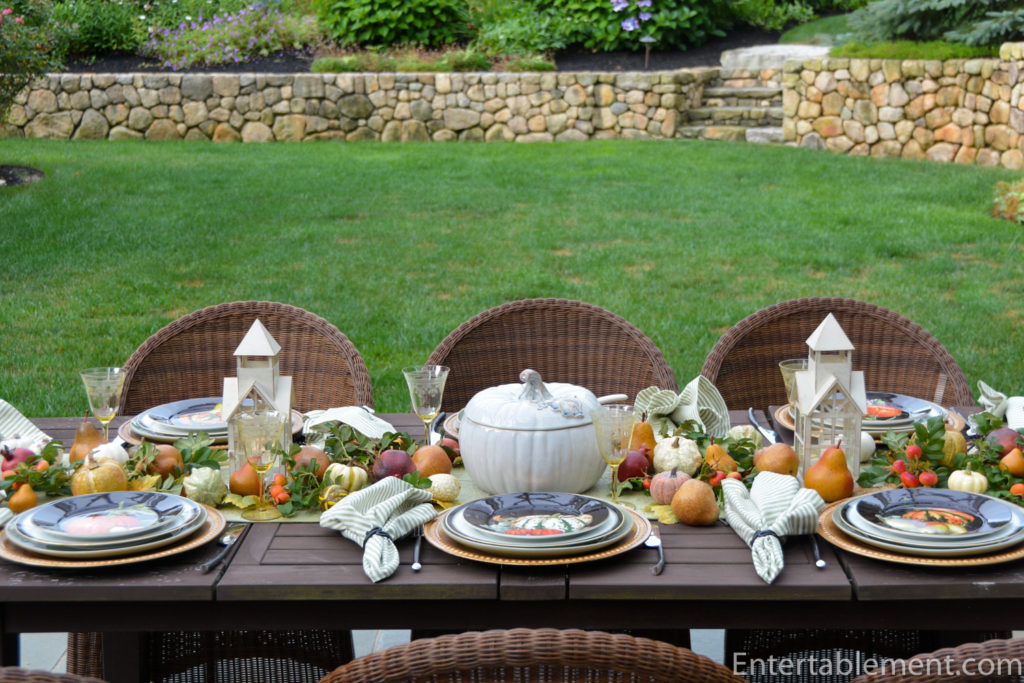 Ah well, no doubt I’ll get into the swing of things shortly. I do love the fall, with cozy sweaters, flickering fires, and wonderful braised food. 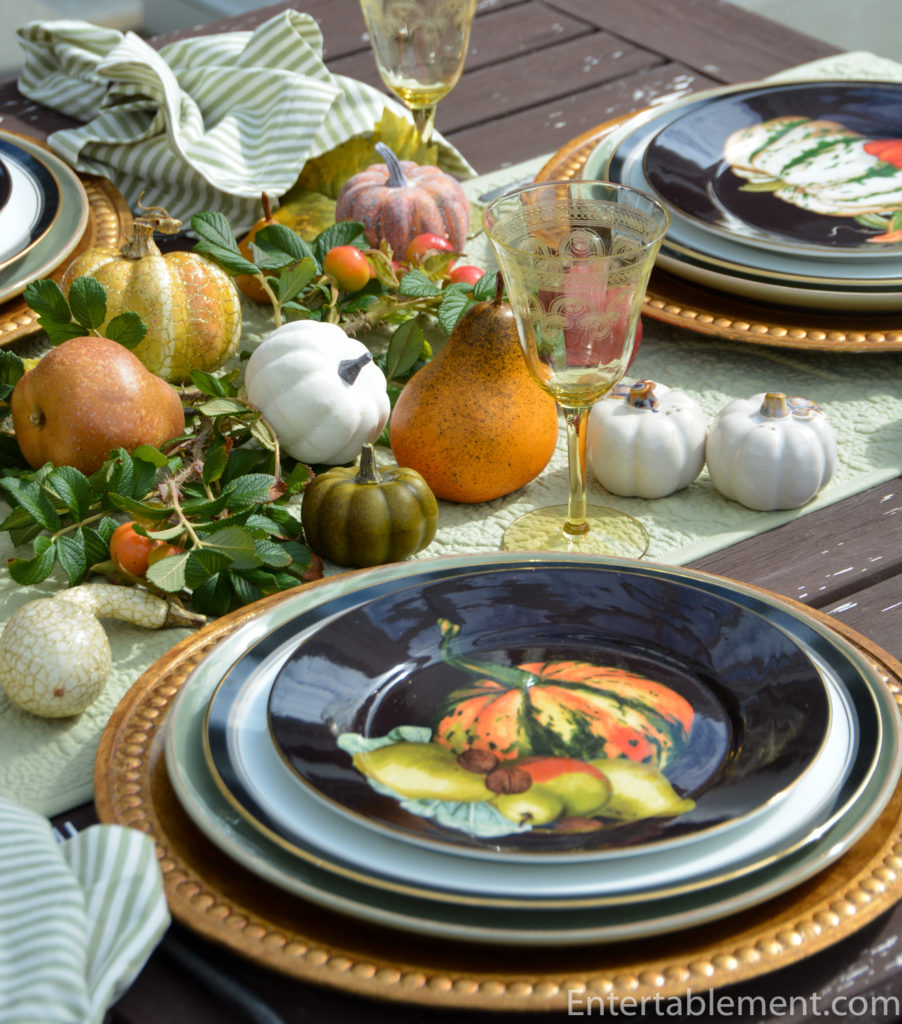 Speaking of food, it’s all hands on deck today to prepare Glenn’s birthday dinner: Pumpkin Ravioli with Sage Butter along with a winter salad, likely Arugula, Fennel and Apple with toasted Hazelnuts. We’ll finish up with carrot cake, the birthday boy’s favourite dessert. That should go some way to bringing back the fall feeling. Just in time to start preparing for Christmas! 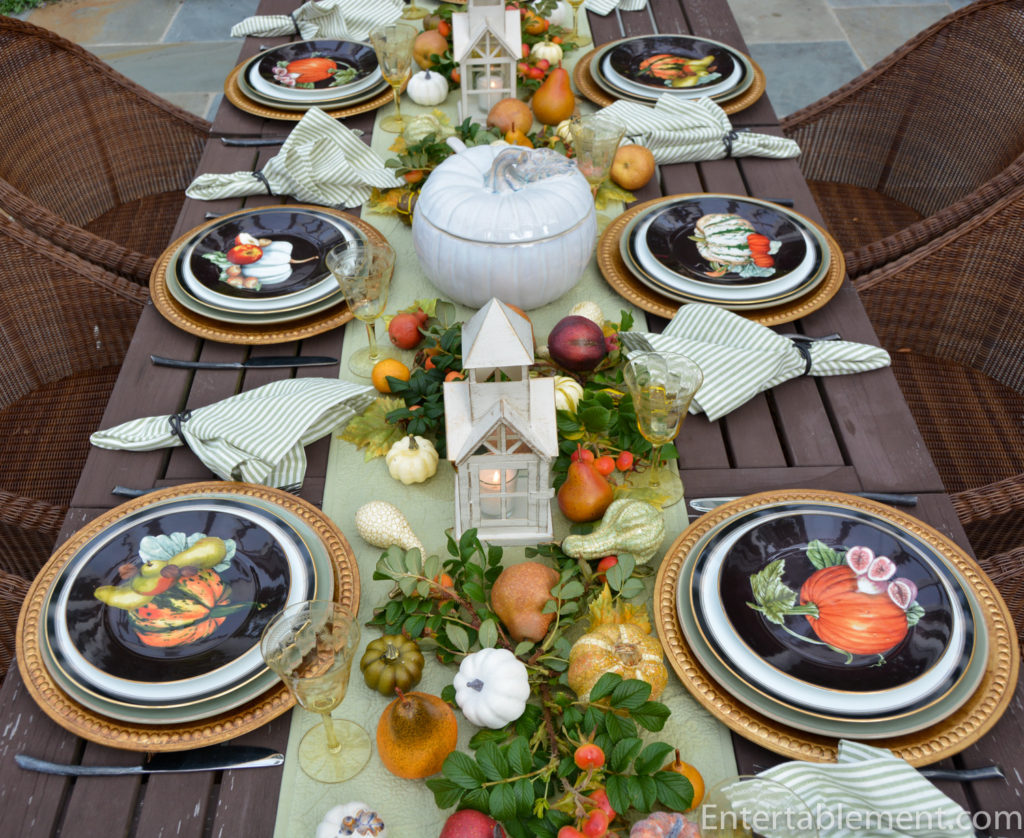 I hope everyone is having a wonderful weekend and enjoying the extra hour of sleep. It’s great to be home!