A Teddy Table for Christmas 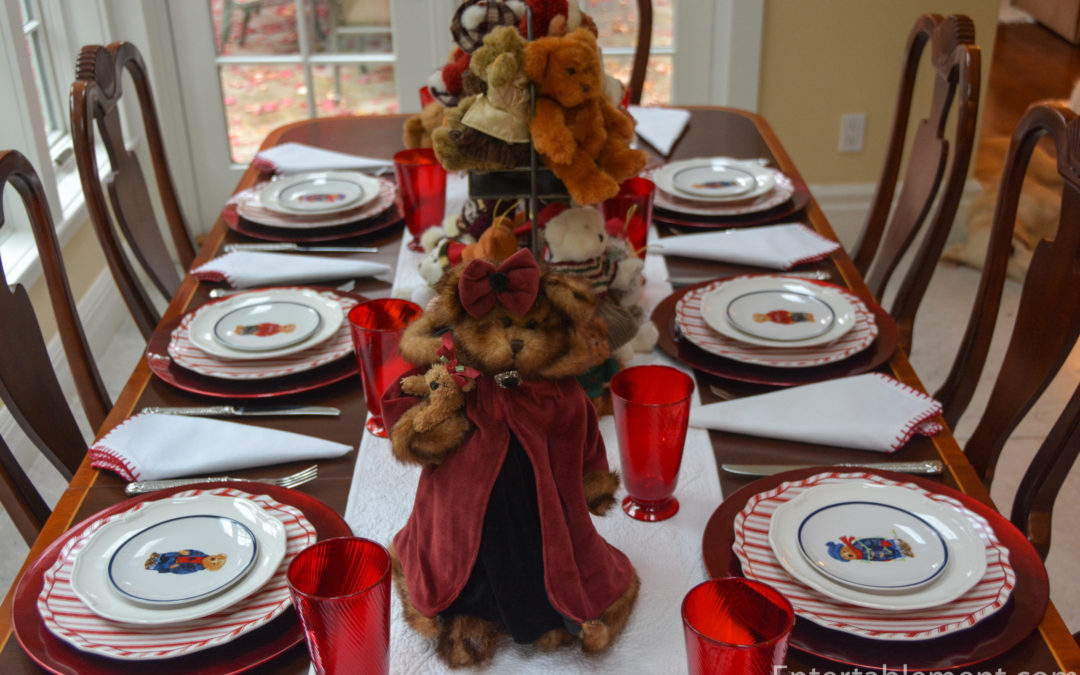 Teddies are very big in our household. 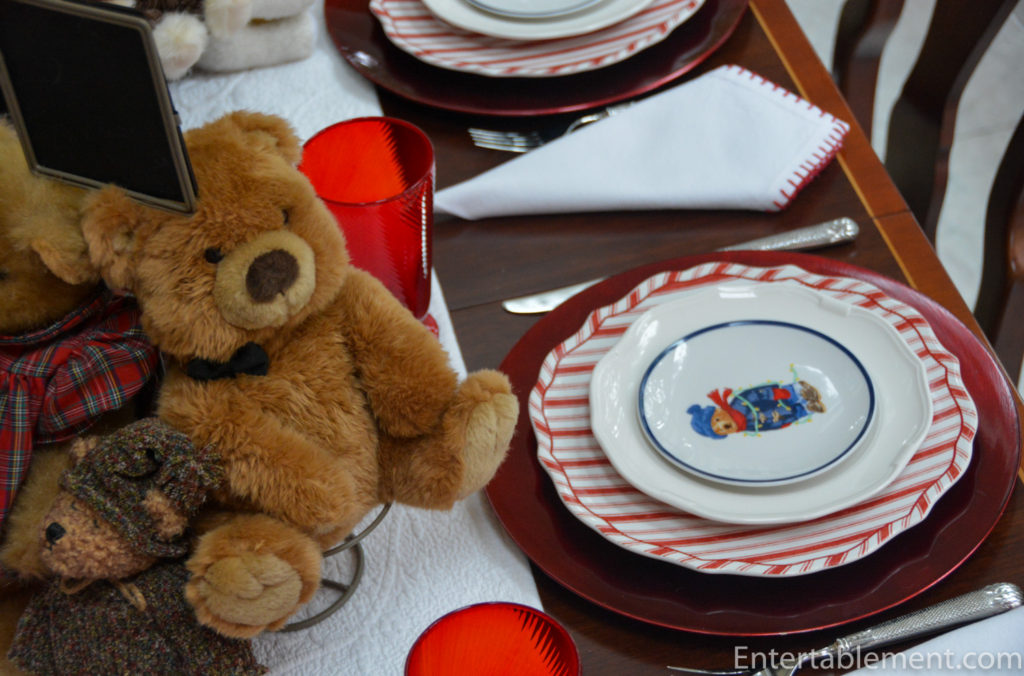 Friends of ours might go so far as to say, Teddies rule our household. I know Teddy, our very outspoken bear, shown below wearing the tuxedo and top hat, would agree. “What’s wrong with that?” he would ask, querulously. You may recall that Teddy, Penny the Penguin and Gustus (short for Augustus) attended the Highclere dinner contest, with their own place at the table. 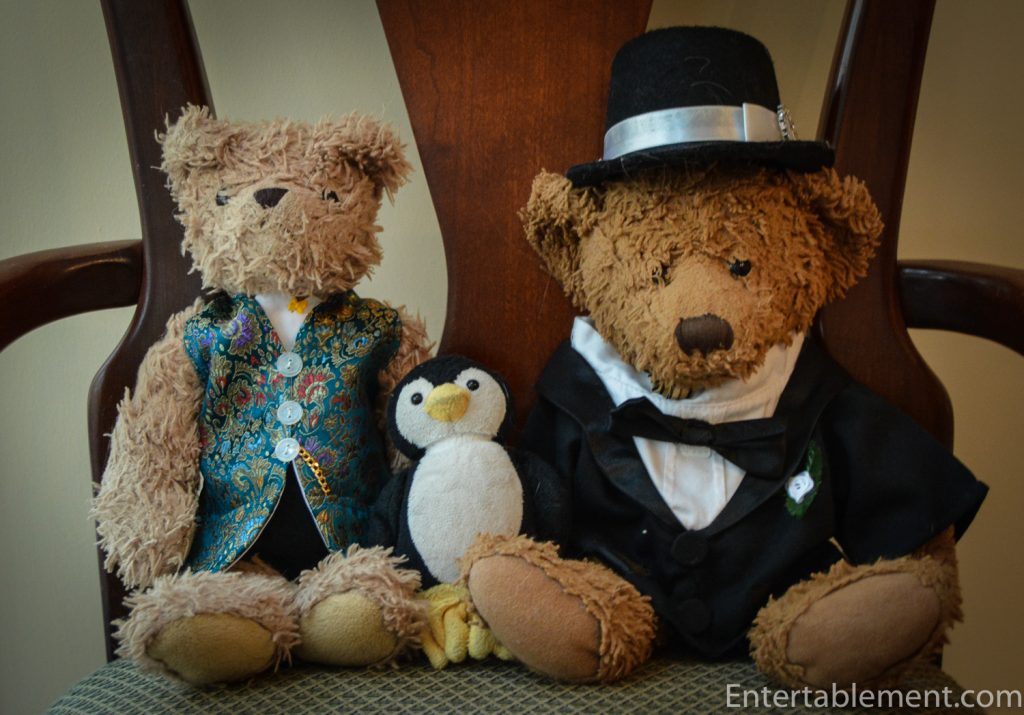 Teddy came to us many years ago from Butchart Gardens in Victoria, BC. He called out to me from a shelf full of look-alikes, but somehow we knew he was The One. He took up a prominent place in the family as a very vocal contributor and has been part of our lives ever since. He was lonely sometimes and needed a companion, so Penny the little Penguin joined us to keep Teddy company when we were busy or had to be out of the house. Penny hails from the New England Aquarium. For some years, only Teddy and Penny travelled with us on our adventures. Here they are on the parapet of Arundel Castle, taking in the view. 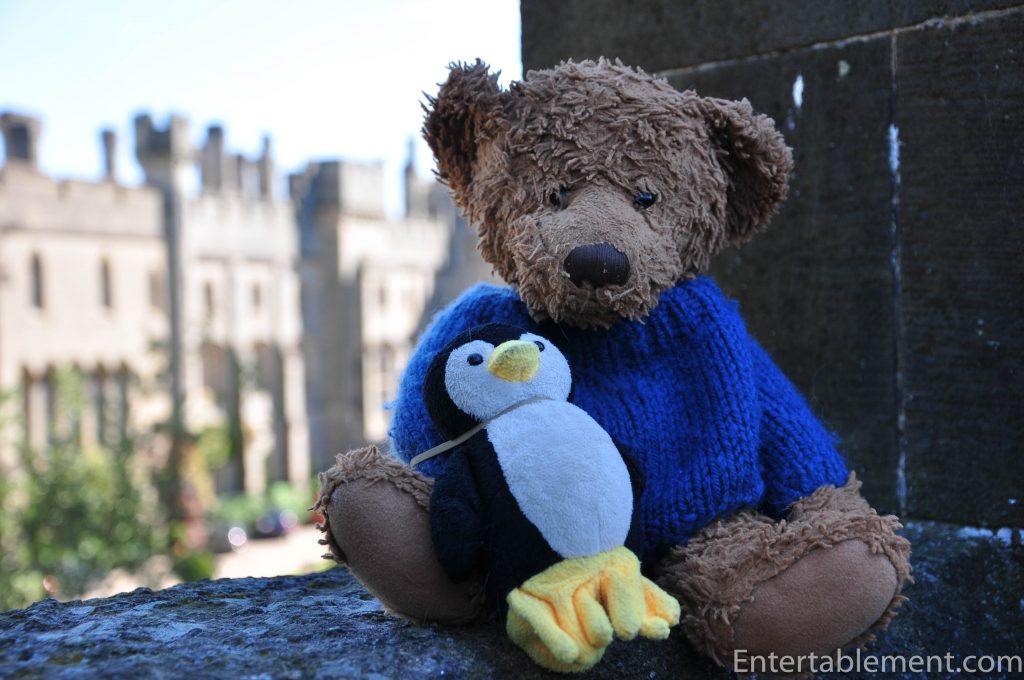 Then Gustus joined us. He was rescued from the indignities of being a bathrobe-sporting-bear-for-sale at the Roman Baths in Bath, England. Teddy donned the robe and posed for this picture at the Roman Baths, to reassure Gustus that it really wasn’t really so bad to be seen in public in a bathrobe. 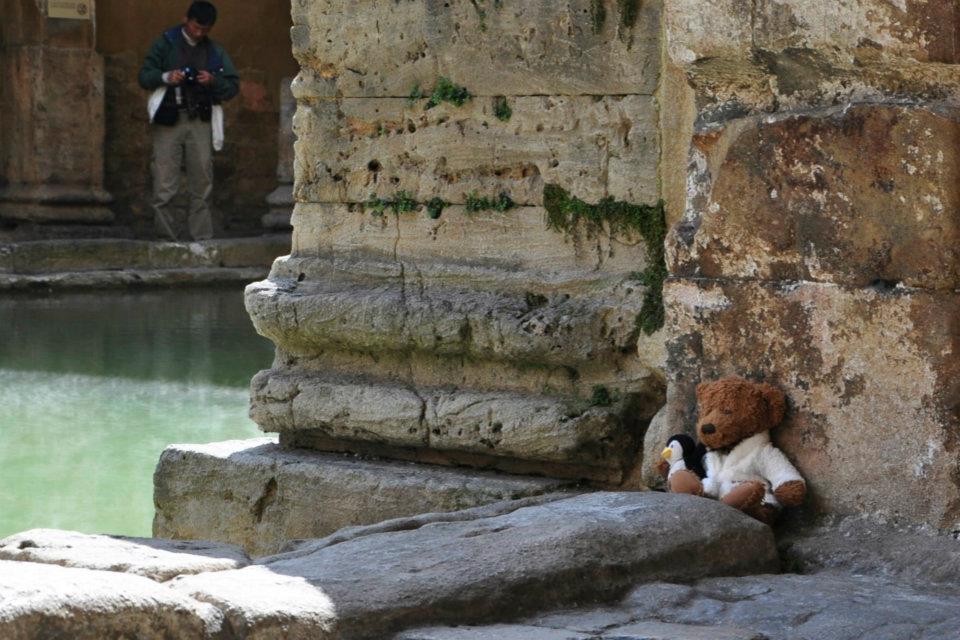 Not so long ago, in fact, Lord Andrew Fraser, a British Peer, was photoed in his robe, taking issue with some Extinction Rebellion protestors. Gustus was mortified on his behalf. 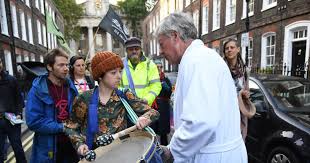 As you might surmise from his demeanour, Gustus is a very dignified bear and being gifted with extraordinary tact, exercises a restraining influence on Teddy’s exuberance. Here they are on a subsequent trip to Bath, both clad in their Bletchley sweaters, which were loaned to them by Eye and Spy, two Bletchley bears who joined the entourage from the Bletchly gift shop. (You may begin to see how the household teddy collection has grown so large!). 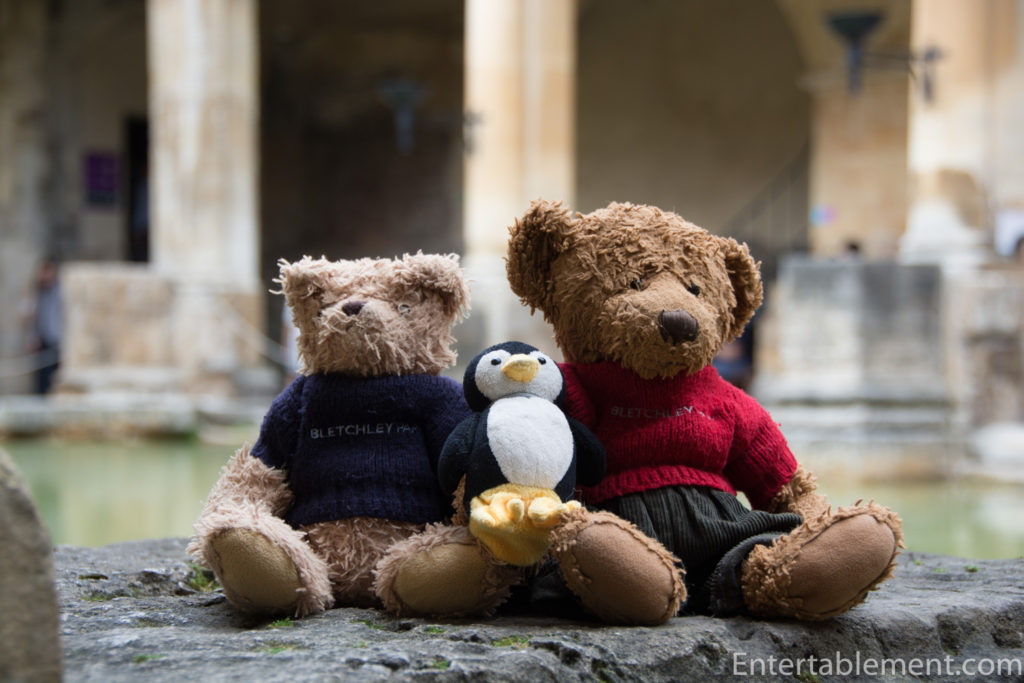 When I came across these teddy plates by Ralph Lauren on eBay (called “Polo”, somewhat prosaically), Teddy insisted they be purchased. He has been somewhat put out by the proliferation of snowmen and penguin plates available and the dearth of teddy-themed offerings. 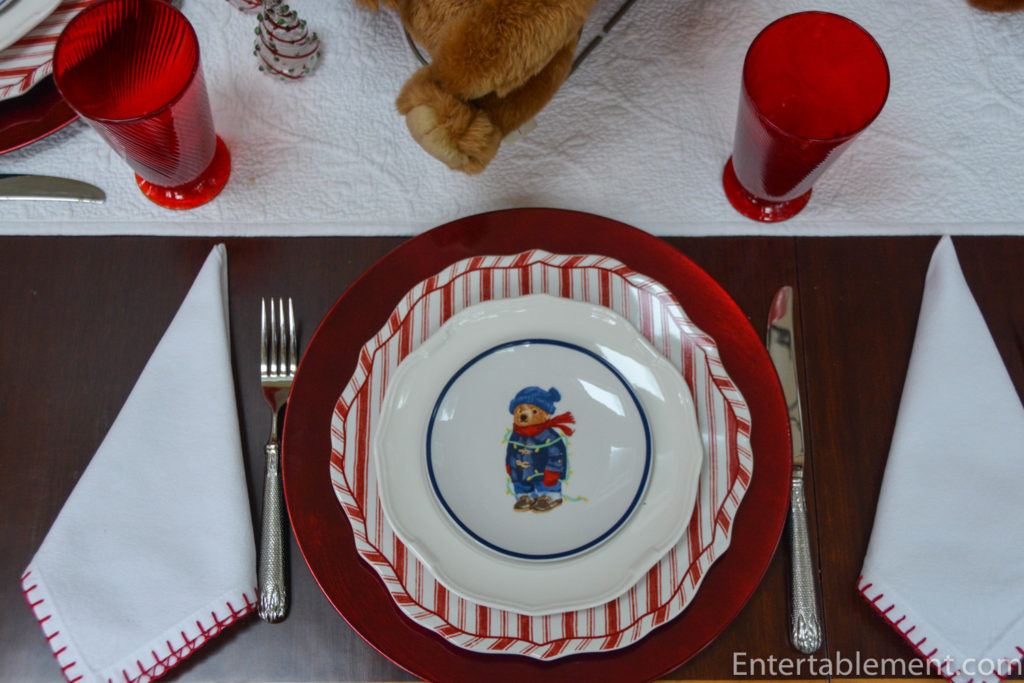 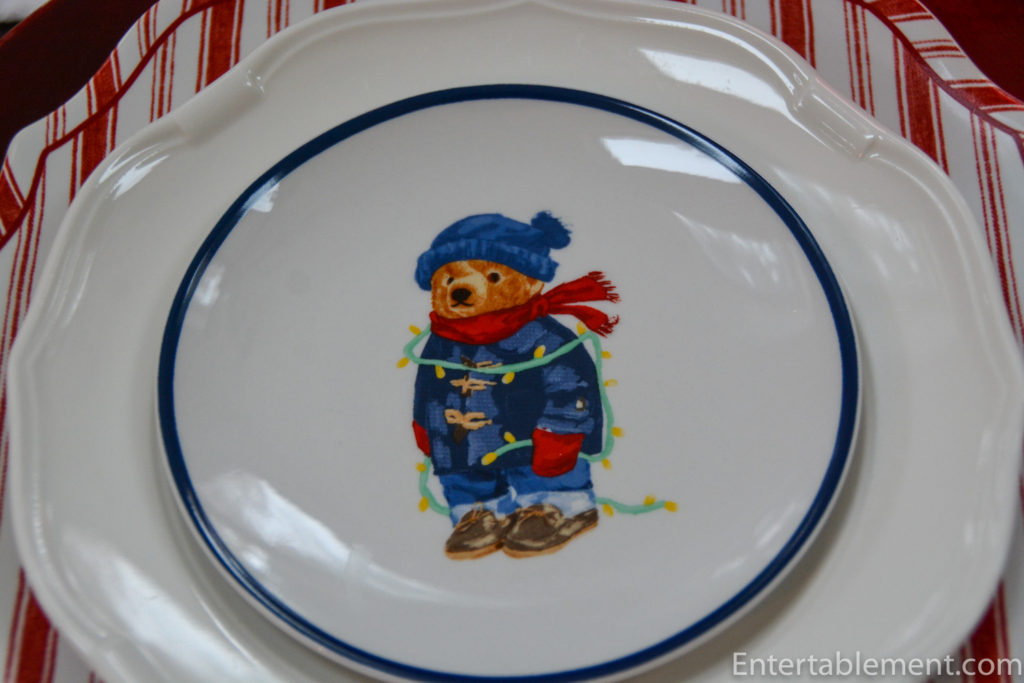 I think this one of the four plates looks most like our Teddy. It’s probably the red sweater and jeans. 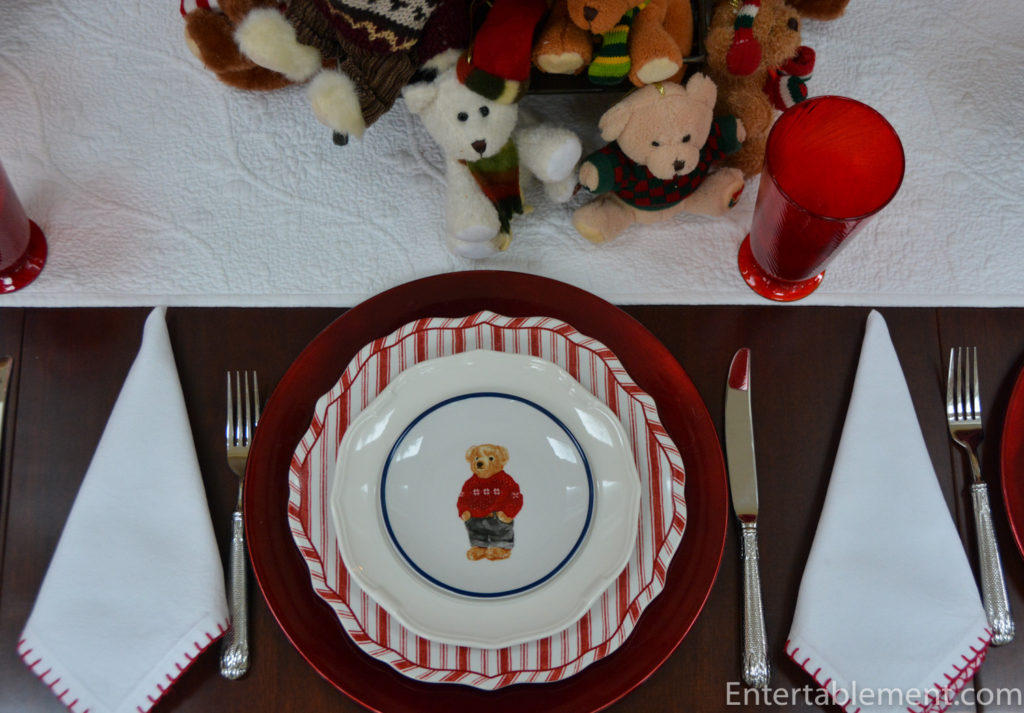 And who are all these other bears, you might ask? They are Christmas ornaments purchased eons ago from Costco. This year, before they took up their spots on the tree near the Playhouse under the stairs, they posed for the Teddy Table. 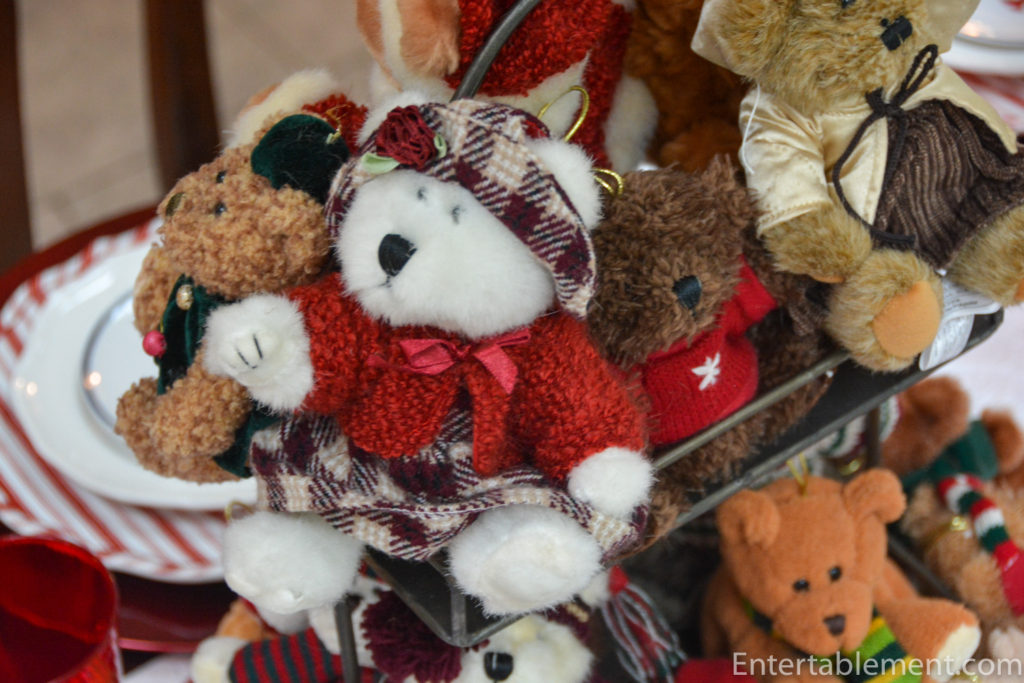 As you might imagine, the little girls adore the tree and look forward to decorating it each year. The girls choose the spots on the tree, and Nana applies a sturdy twist-tie to each bear, firmly affixing it to the branches. One Diabolical Dundee loves to “liberate” the bears during his nightly wanderings, tossing them to the ground where they lie in danger of being molested by the dogs. Can’t have that! 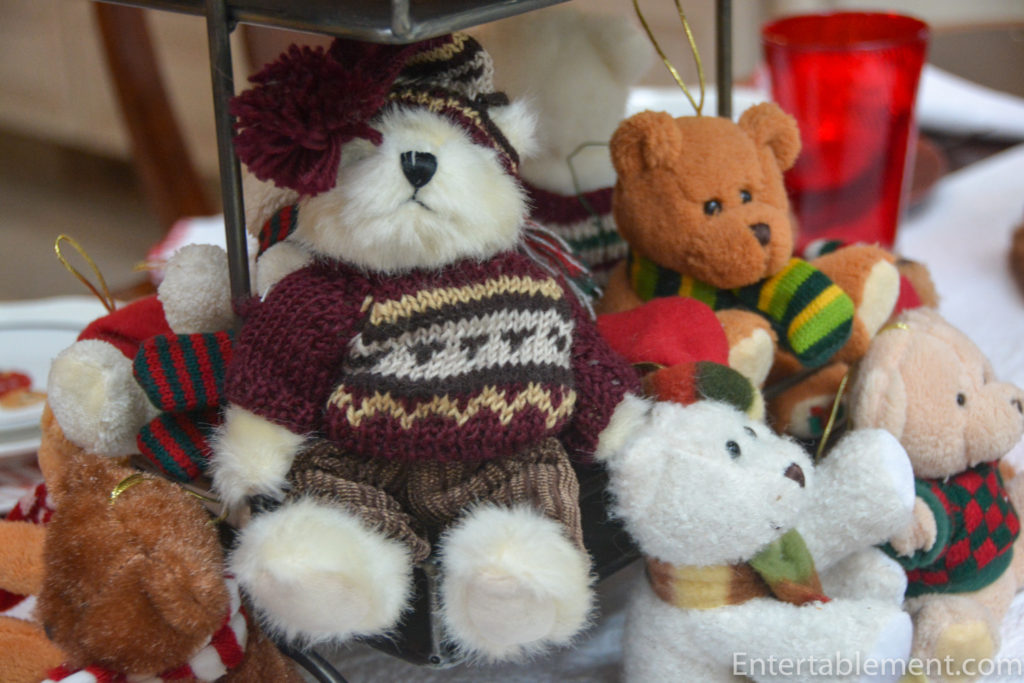 Didn’t the bears do a stellar job, posing?  They were very cooperative and tried their best to stay perched in somewhat precarious positions on the stands. 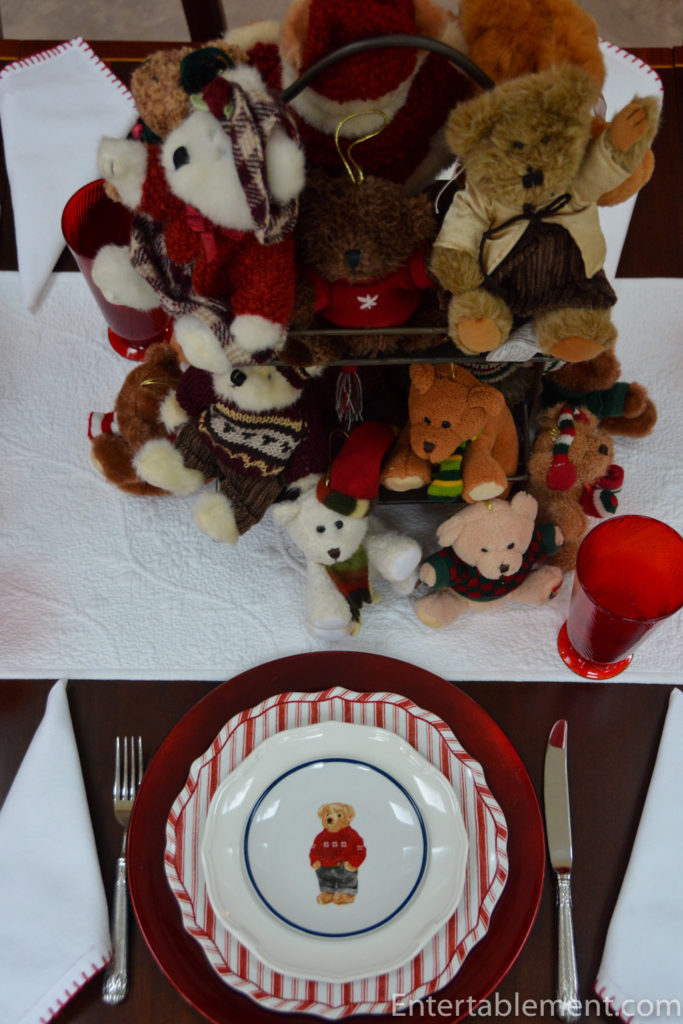 You’ll be pleased to know that there is at least one girl-bear plate. 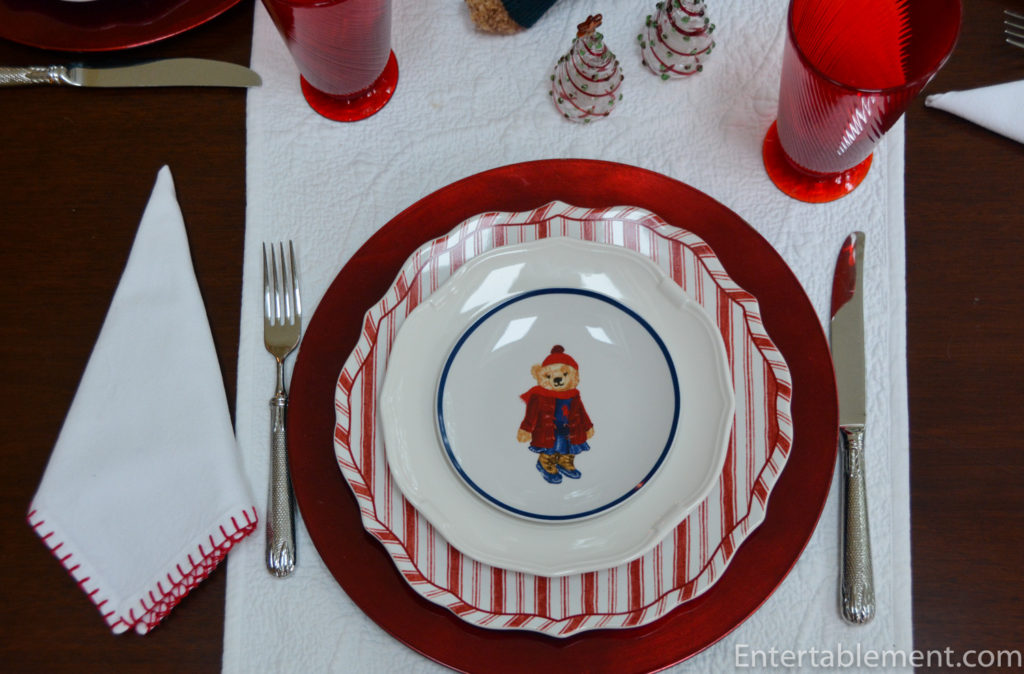 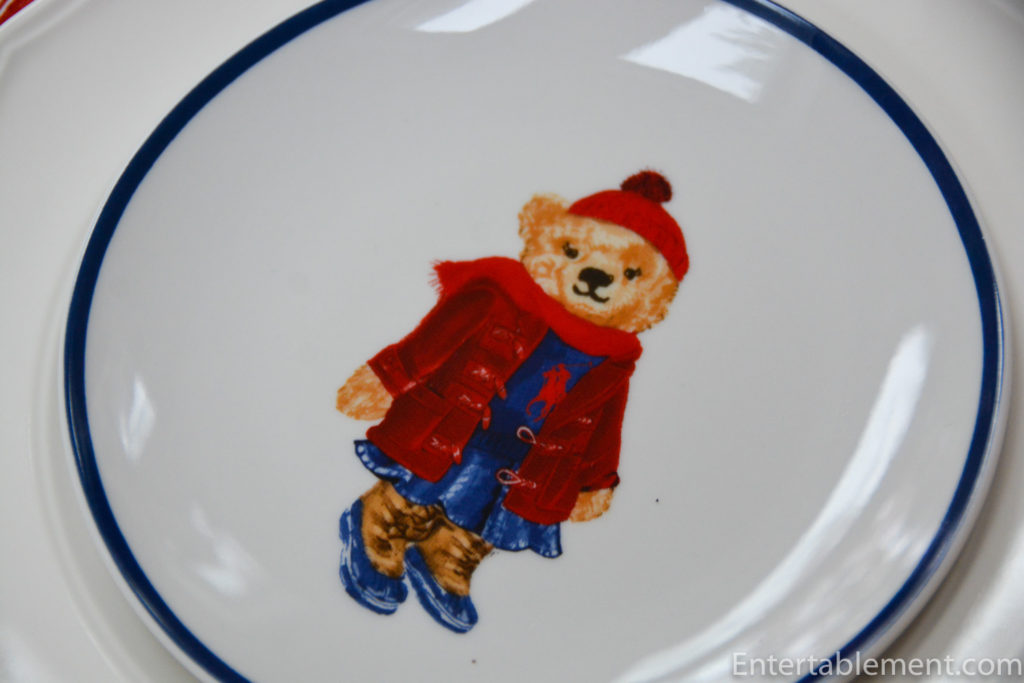 Not at all snooty, unlike the velvet-robe-clad bear who has her own stand. Teddy doesn’t like her much. He says she’s a snob and makes disparaging remarks about bears “who get carried around and mauled by humans”. 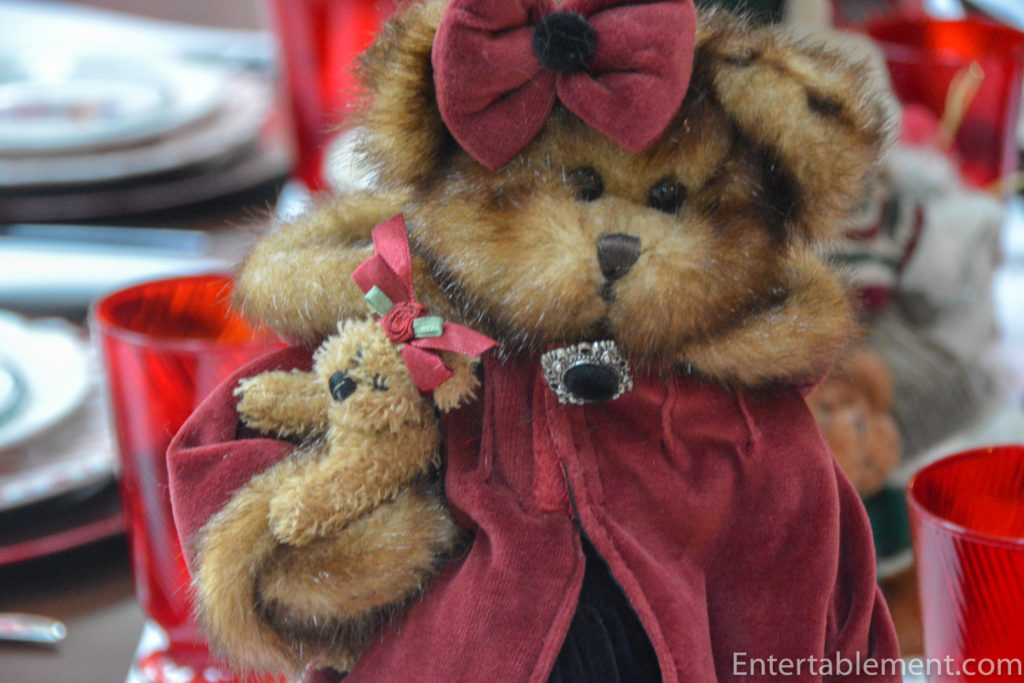 She did an excellent job on the table, despite her rather stuffy personality. 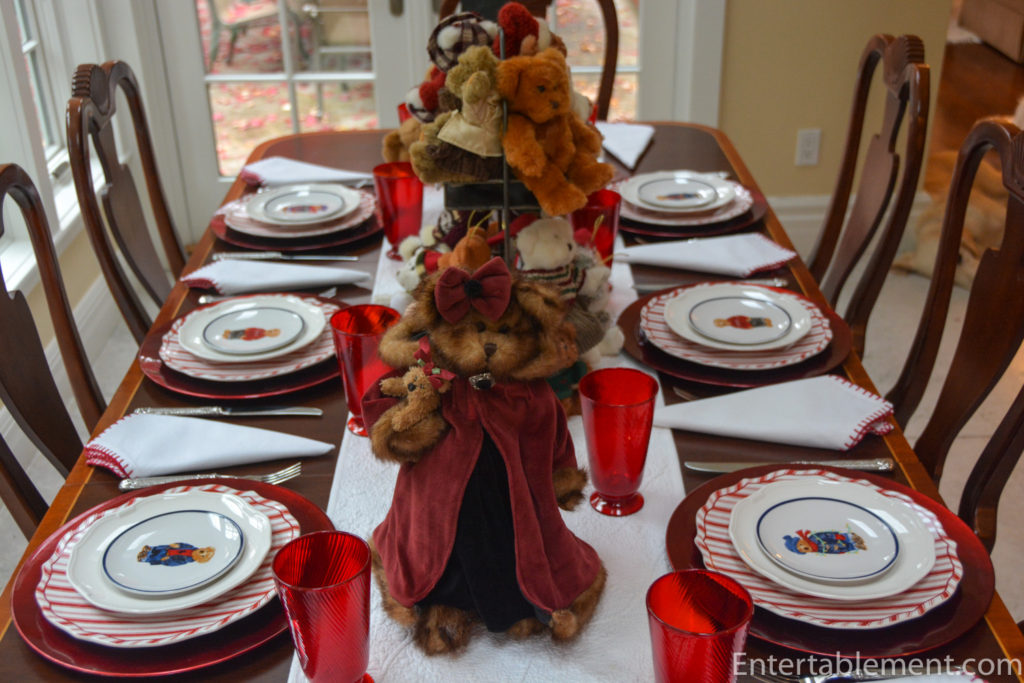 The last plate is another boy bear, wearing a blue duffle coat and jeans. He looks very friendly. 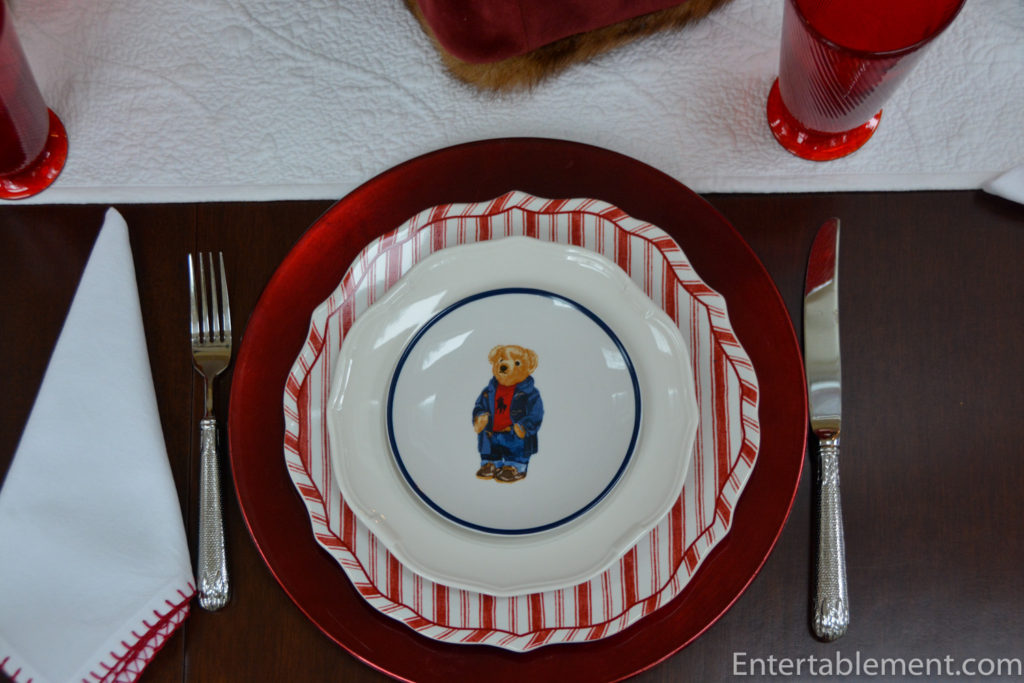 On to the table and its accoutrement. Under the Polo appetizer plates, I stacked Villeroy & Boch Country Heritage salad plates. 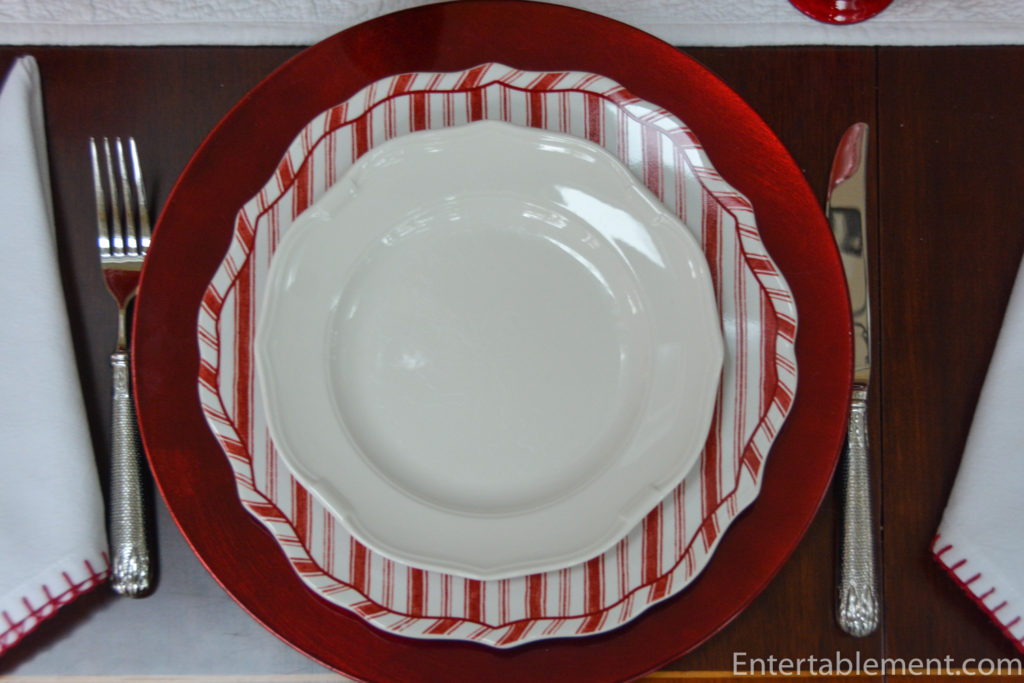 Under that is a striped dinner plate from Pier 1 a couple of years ago. The charger is part of Pottery Barn’s catering series and the cutlery is from Williams Sonoma (both from ages ago). The napkins are from Home Sense fairly recently. 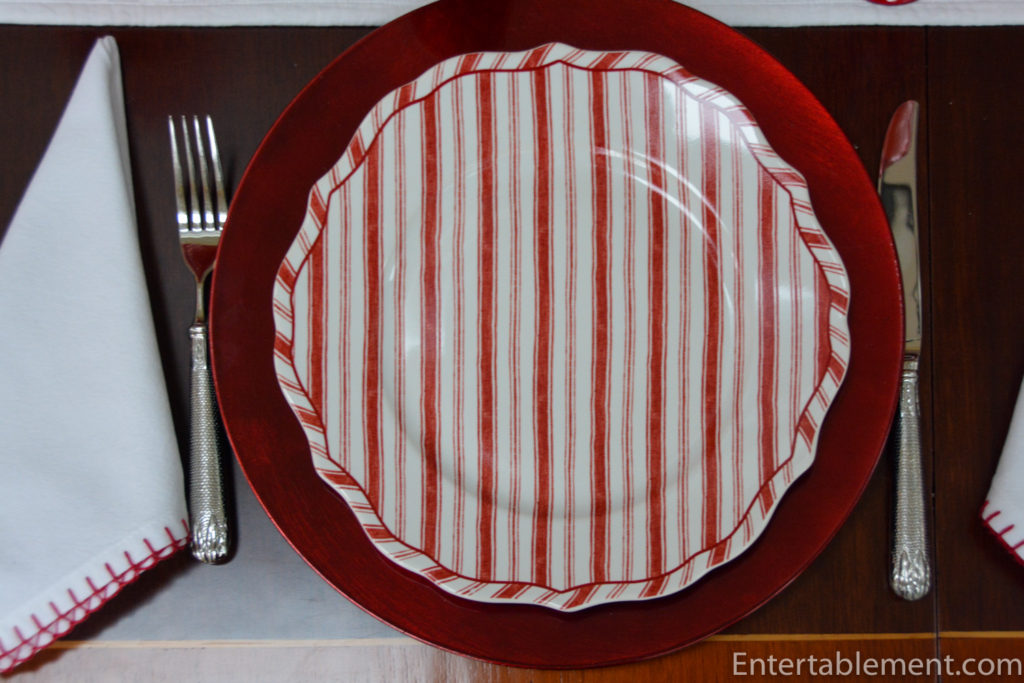 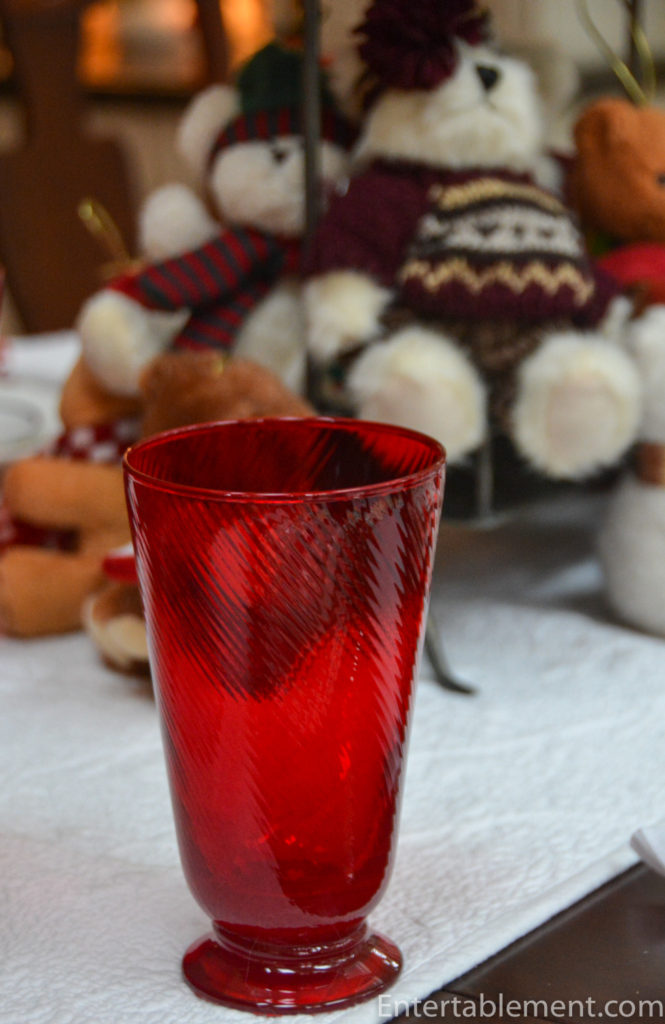 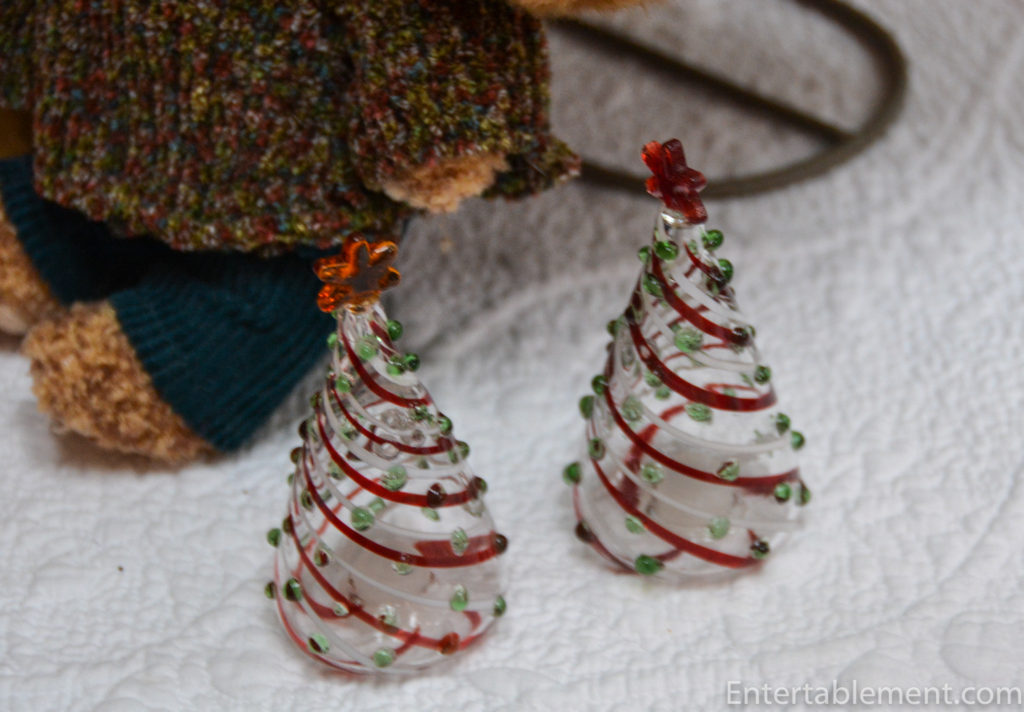 Christmas really is for kids (and big kids, disguised as adults). 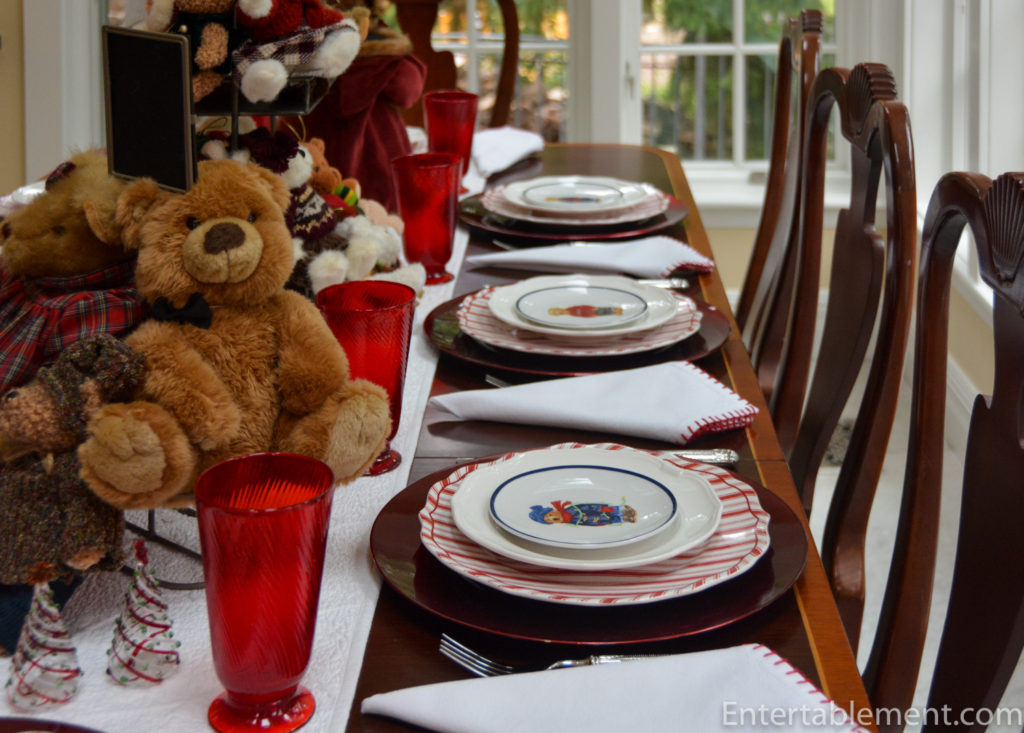 Speaking of big kids, you may have picked up this story in the news, about a Bunny who took an adventurous ride in a WWII Lancaster bomber. The Canadian Warplane Heritage Museum in Hamilton, Ontario has one of the two “Lancs”, as they’re affectionately known, still flying today. The father of Bunny’s family is a 58-year-old squadron leader in the Royal Air Force, and he was delighted when the family purchased a ride on the Lancaster. (Glenn is still hoping to have that experience someday). Bunny went along for the ride, and they tucked him up into the gun turret for photo opportunities, not appreciating that the vintage plane is not pressurized. Bunny was sucked out of the plane, never to be seen again, or so the family thought. The story has a happy ending, though, and I’ll leave it to you to click on the link for all the details.

Upon hearing the story, our Teddy had to lie down with a cold compress. He was appalled that the family could be so careless. Though very glad Bunny was returned to his home, we had to actively dissuade him from calling Stuffed Animal Social Services. He pointed out that when Glenn had his Spitfire flight in England, Penny (the designated flight companion), traveled safely inside Glenn’s flight suit. 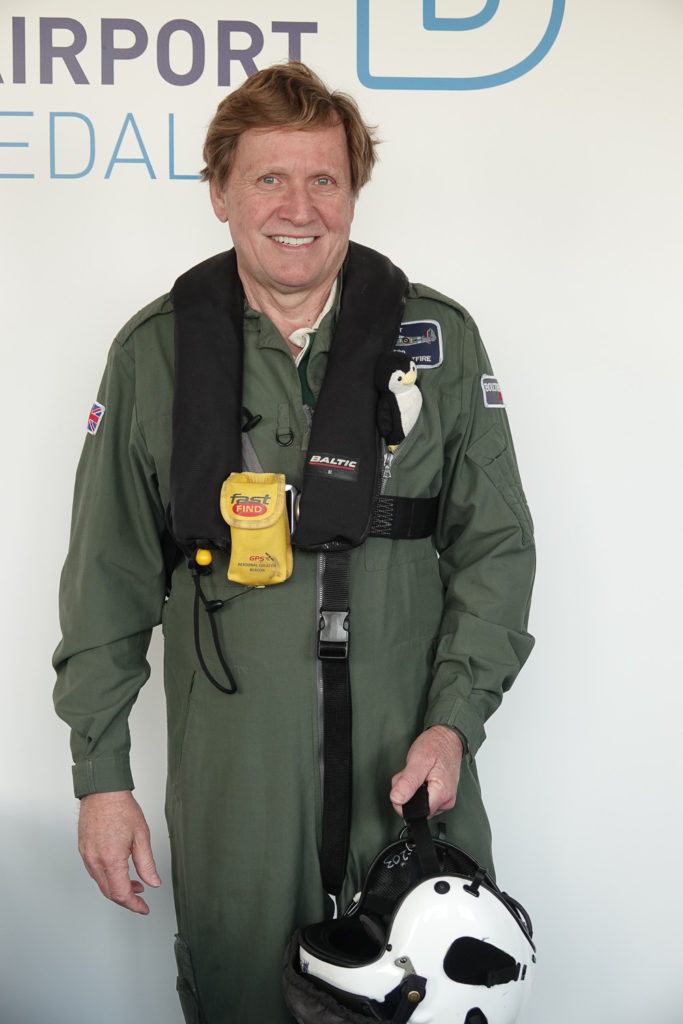 And Teddy, Gustus and little Learned Bear were only permitted to sit on the stairs of the Spitfire. 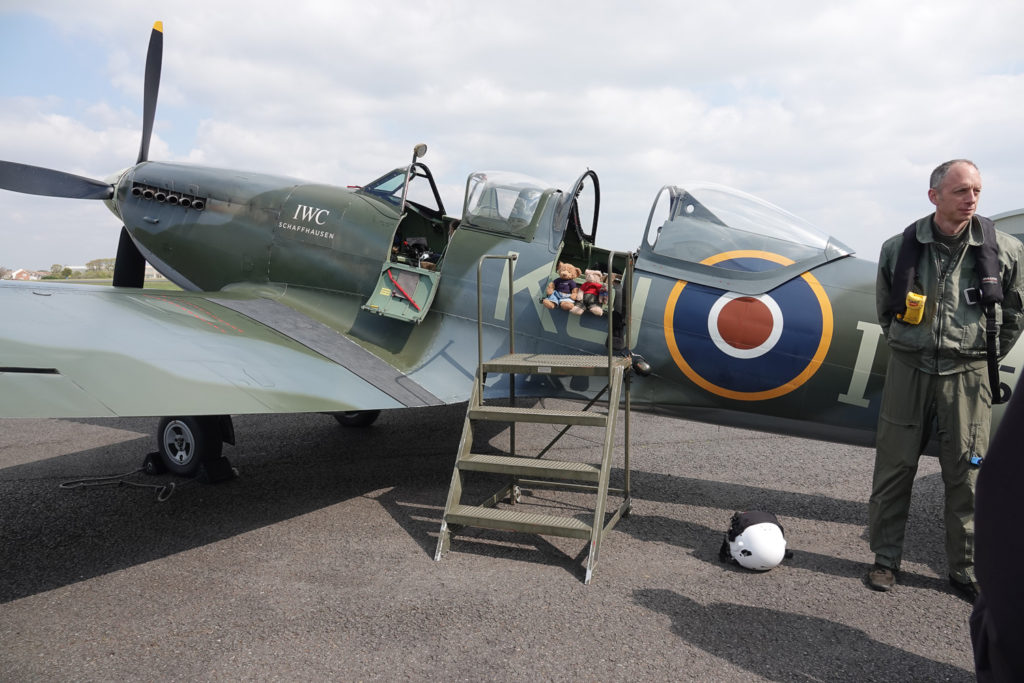 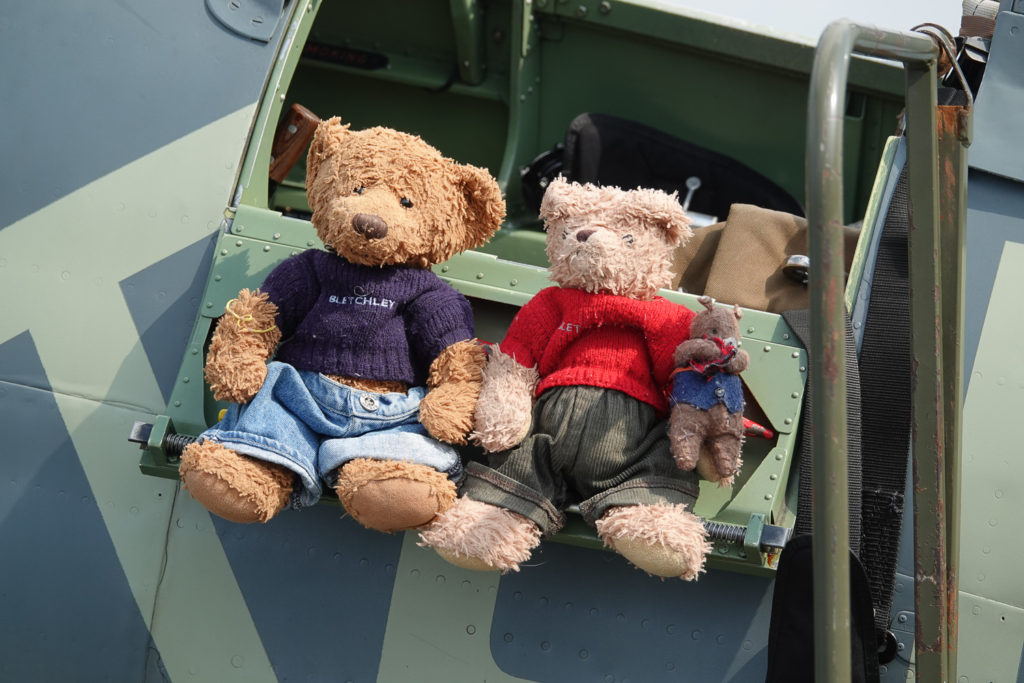 Oh, the adventures of a Bear-ridden family! 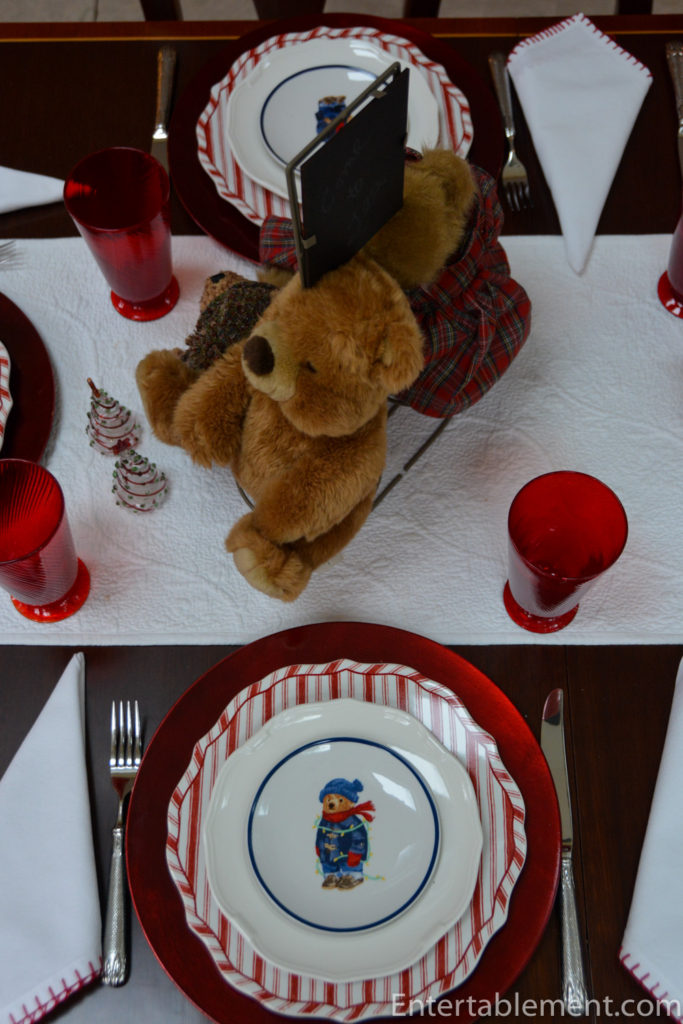 I will leave you with photos of Santa Bear, now happily ensconced on the tree downstairs. 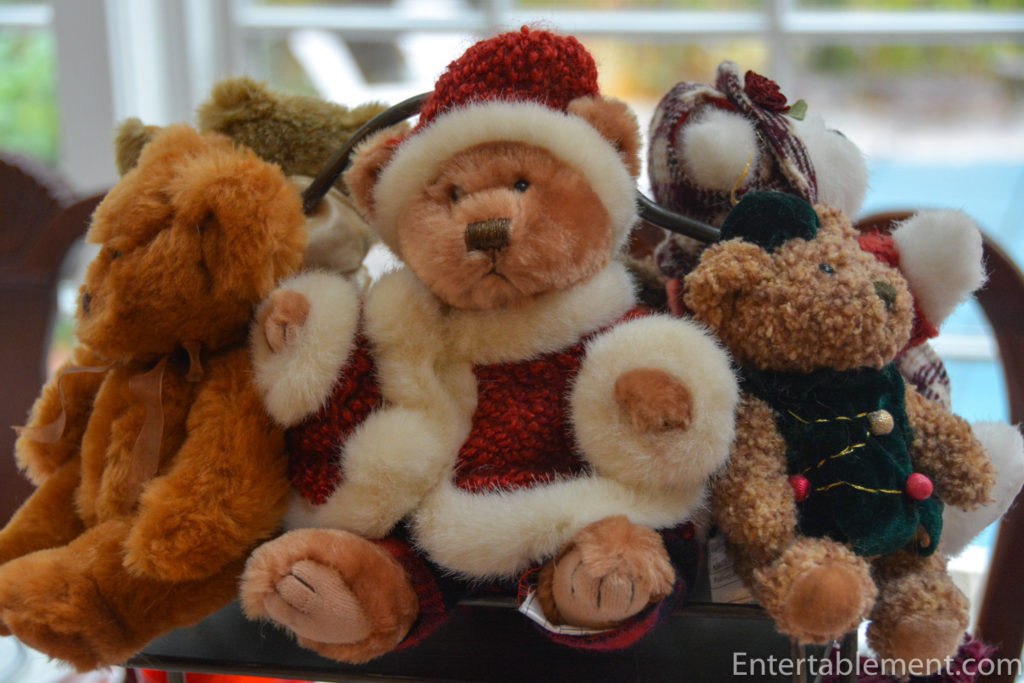