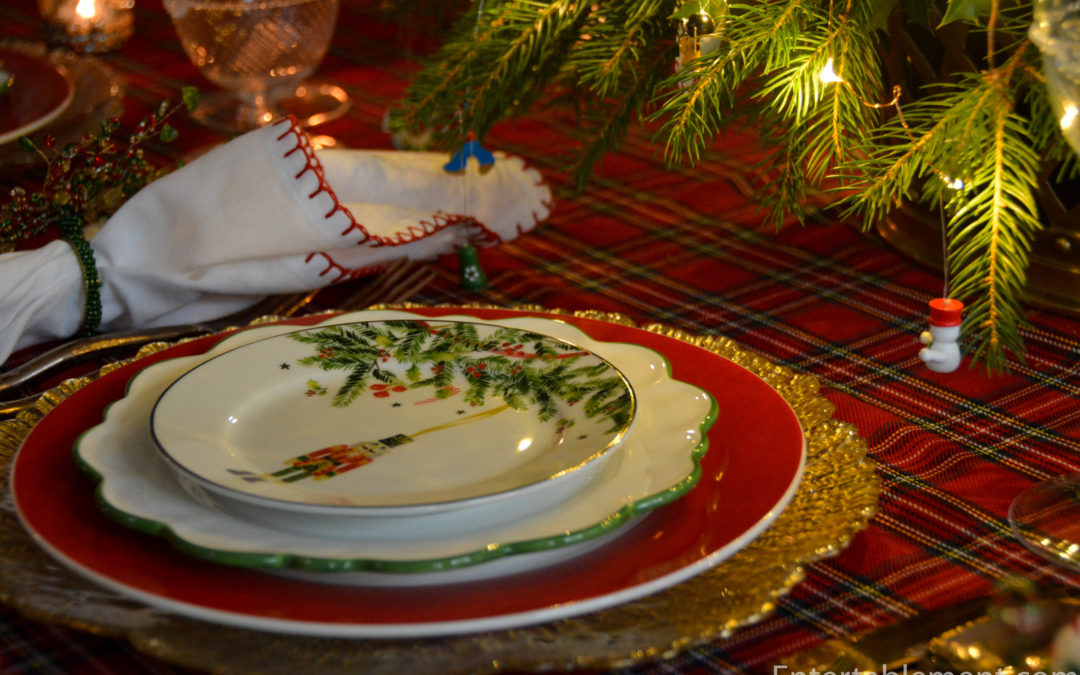 My paternal grandparents lived next door to us from the time I was five until my early teens. They hailed from Yorkshire, in the North of England, and their practical, straightforward approach to life extended to the Christmas season. Having lived through two World Wars and the intervening Great Depression, they lived their lives simply, conducted themselves with tremendous dignity, and favoured very little fuss, They took extremely good care of everything they owned and didn’t spend a lot of time worrying about what they didn’t have; less was more, As a child, I was somewhat shocked that their entire decorative acknowledgement of the Yuletide season was a tabletop-sized artificial Christmas tree. That was enough. No more was needed. 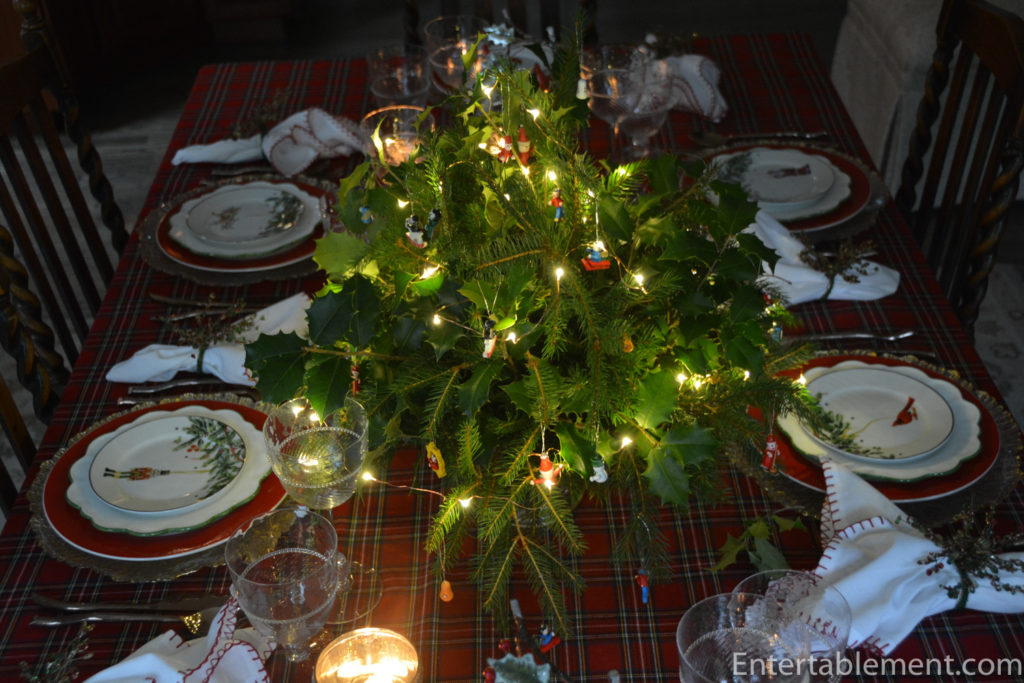 Being the youngest grandchild conferred some special privileges, among them the assigned task of assembling and decorating their tree each year. Sometime in early December, Grandad would get the box up from the basement along with a couple of strings of lights and some boxes of small ornaments. In retrospect, the tree was a rather ghastly affair consisting of a plain green pole into which singularly straight branches covered with some fuzzy, grass-like substance were fastened. Even accepting it was the 1960s, and artificial trees were not at their artistic zenith, shall we say, it was a fairly pathetic specimen. No matter. They liked it, I delighted in decorating it, and it was part of the Christmas preparation tradition. 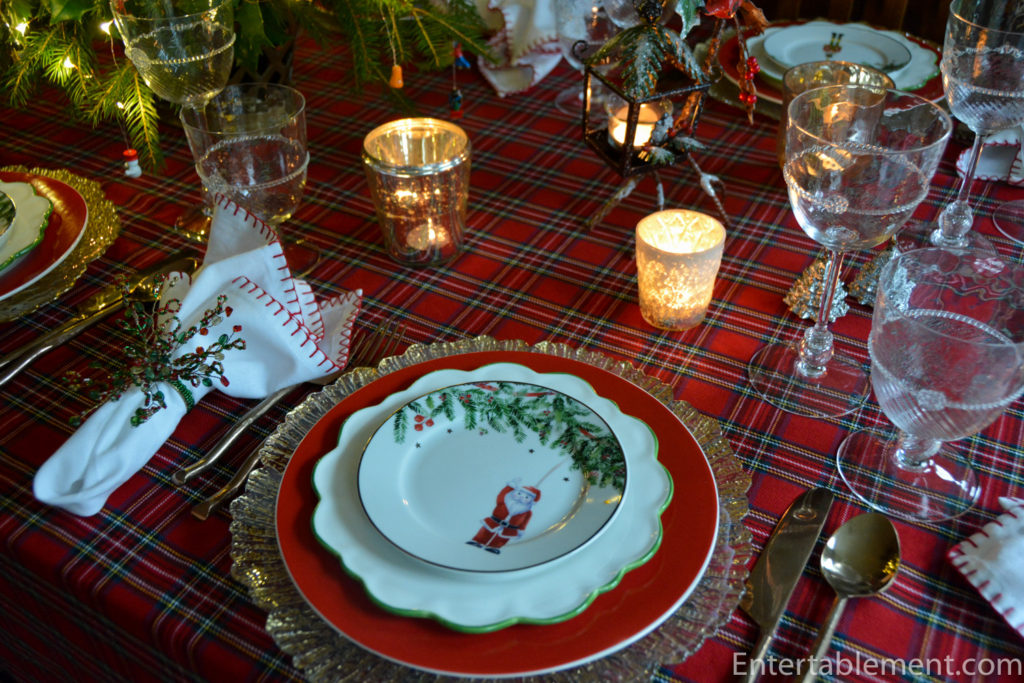 I was reminded of that tradition when I came across these appetizer plates from Pier 1 last year and decided to make my own tabletop tree with tiny lights and small wooden ornaments, similar to those I had hung from Grandma & Grandad’s tree. 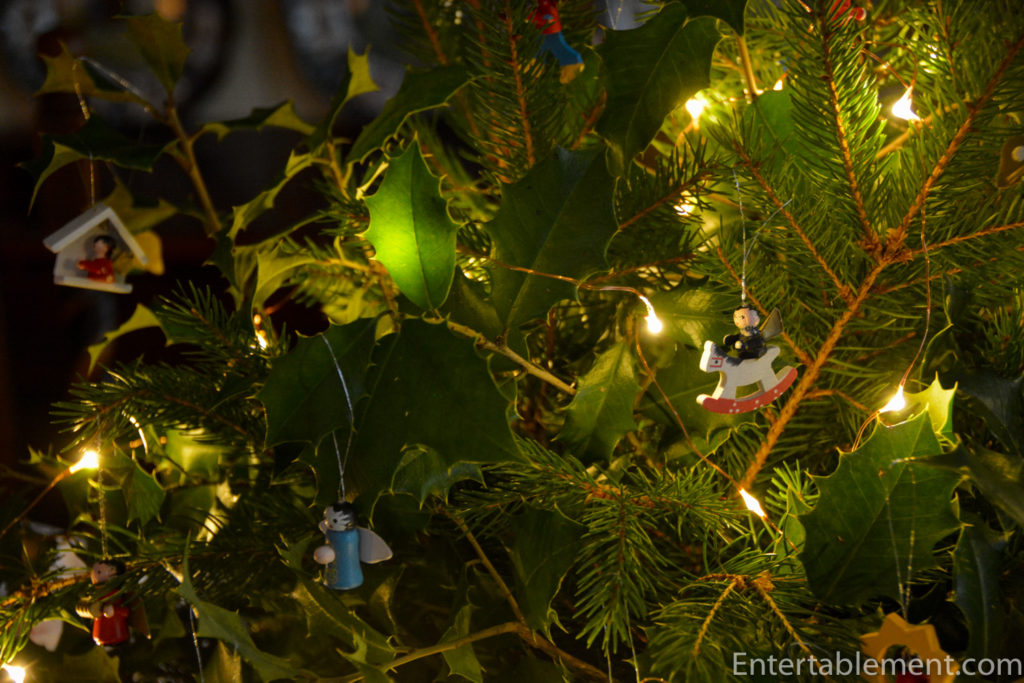 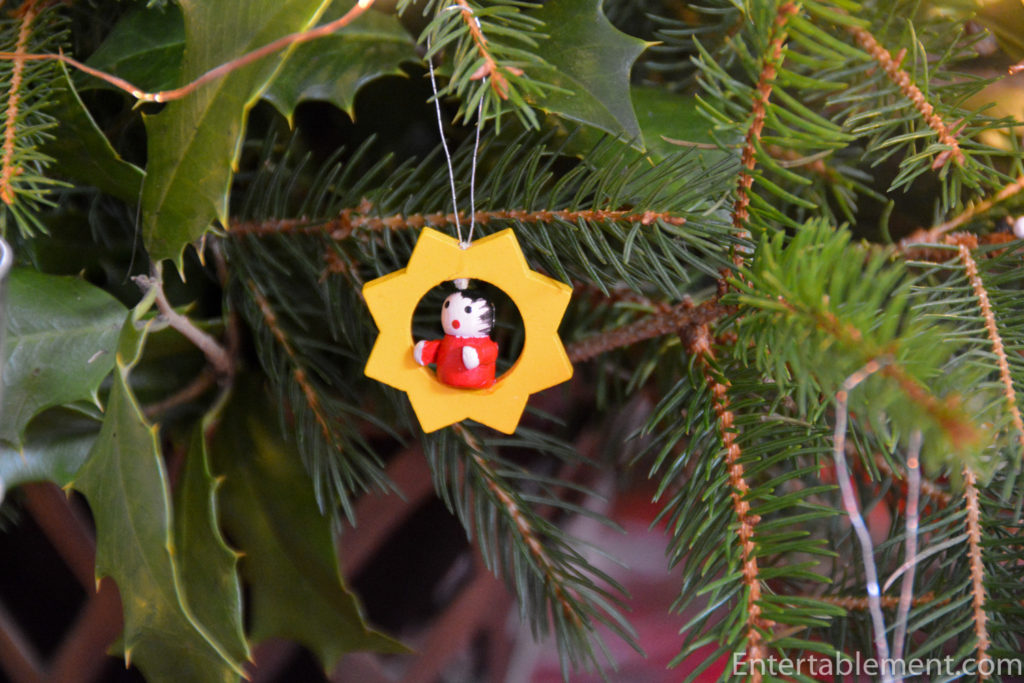 There is a Santa, of course. 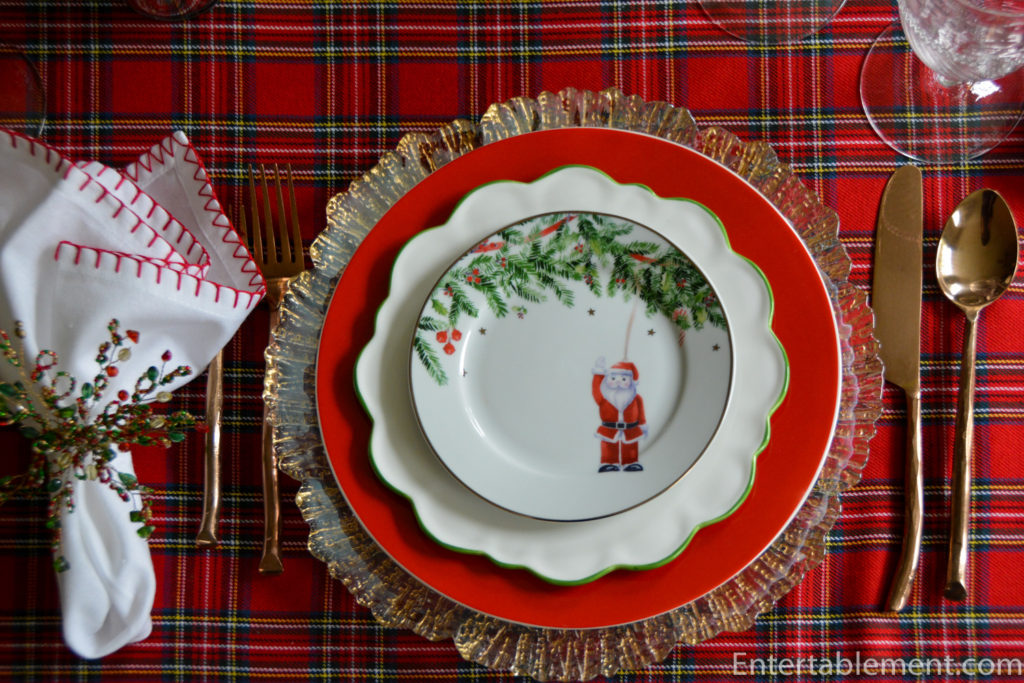 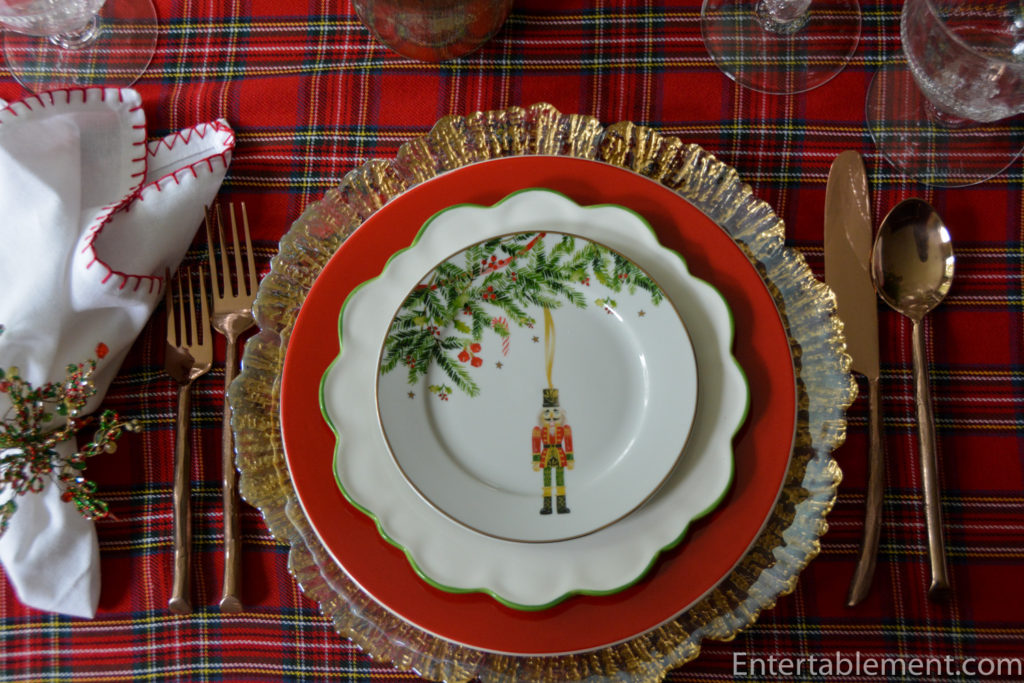 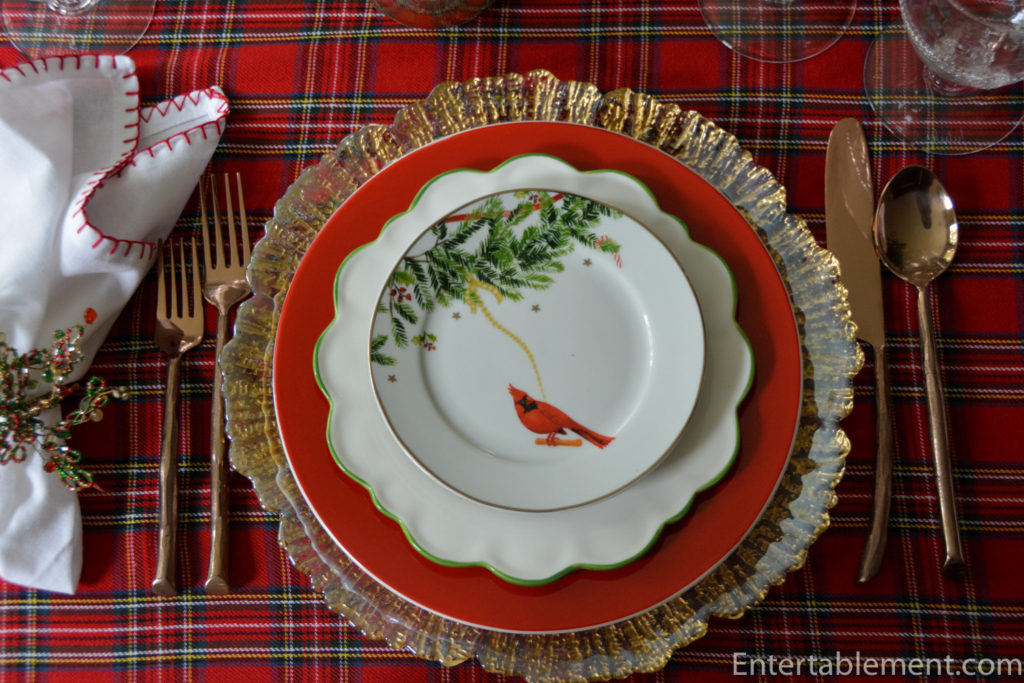 And best of all, a golden retriever, covered in a string of lights (which ours would be, too, if we let them have their way with the Christmas tree). 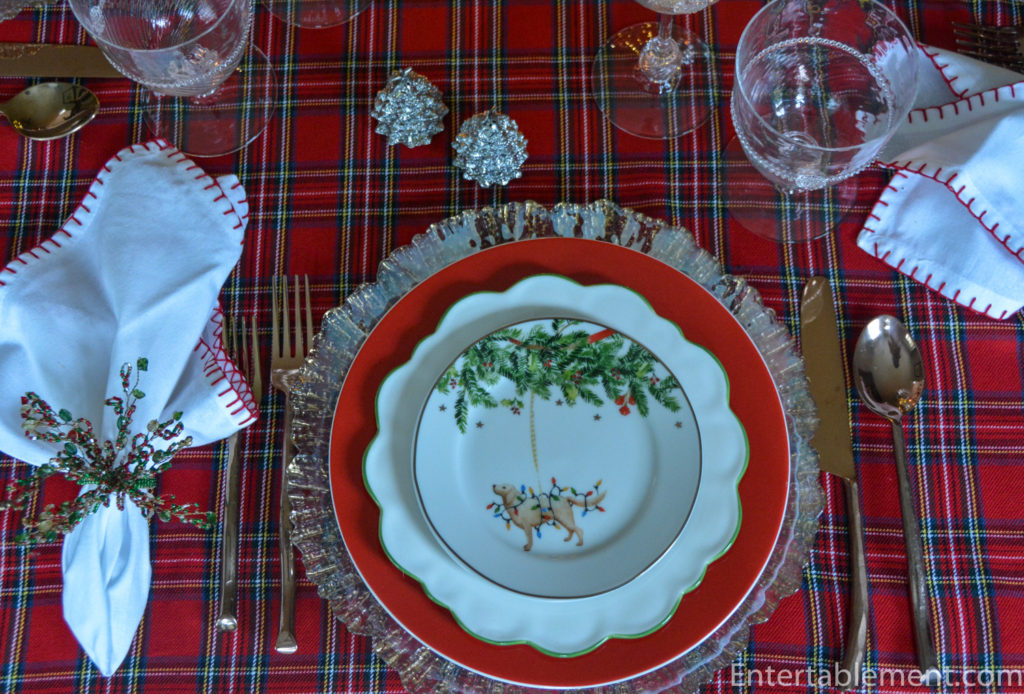 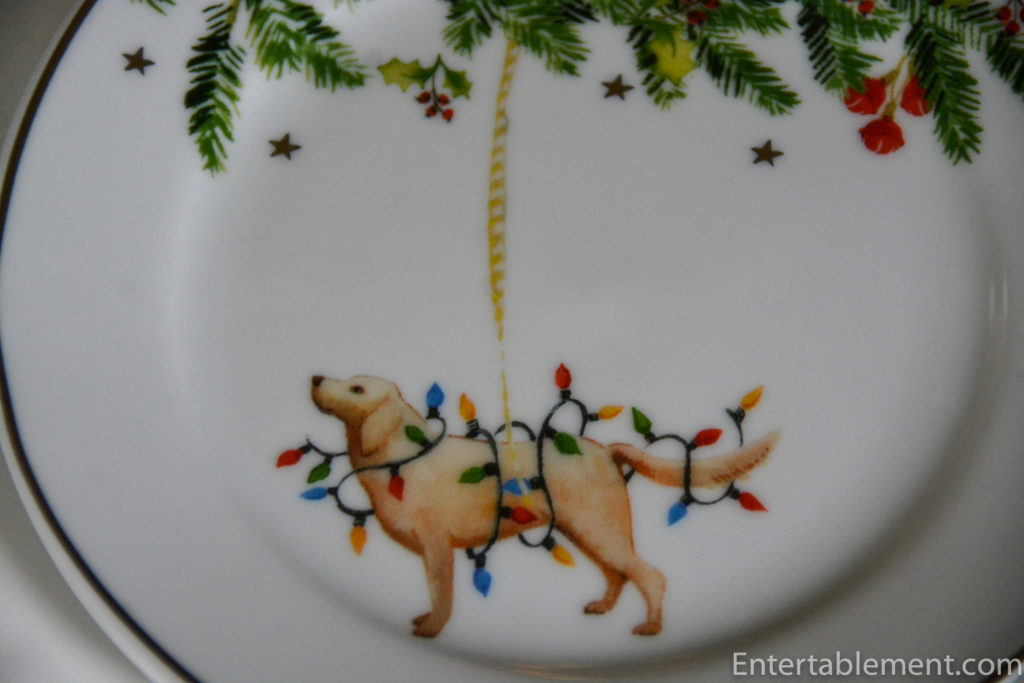 I made the “tree” with branches of real spruce and holly, then strung some battery-powered tiny lights before adding the diminutive wooden ornaments. 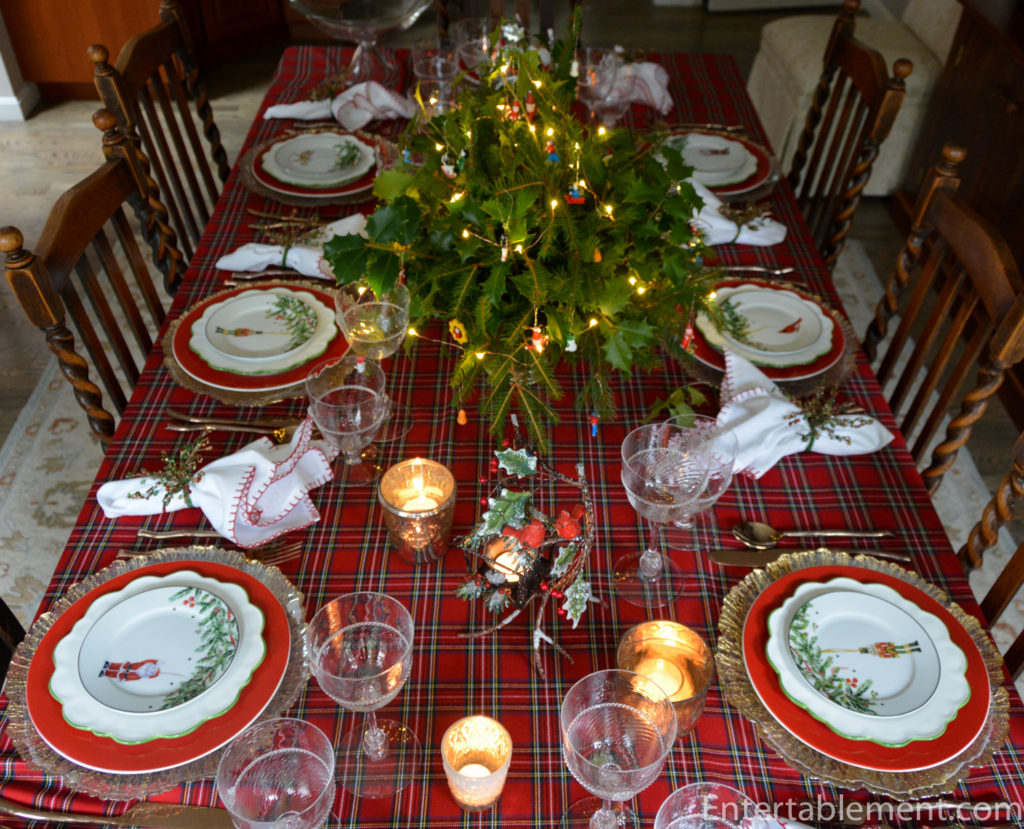 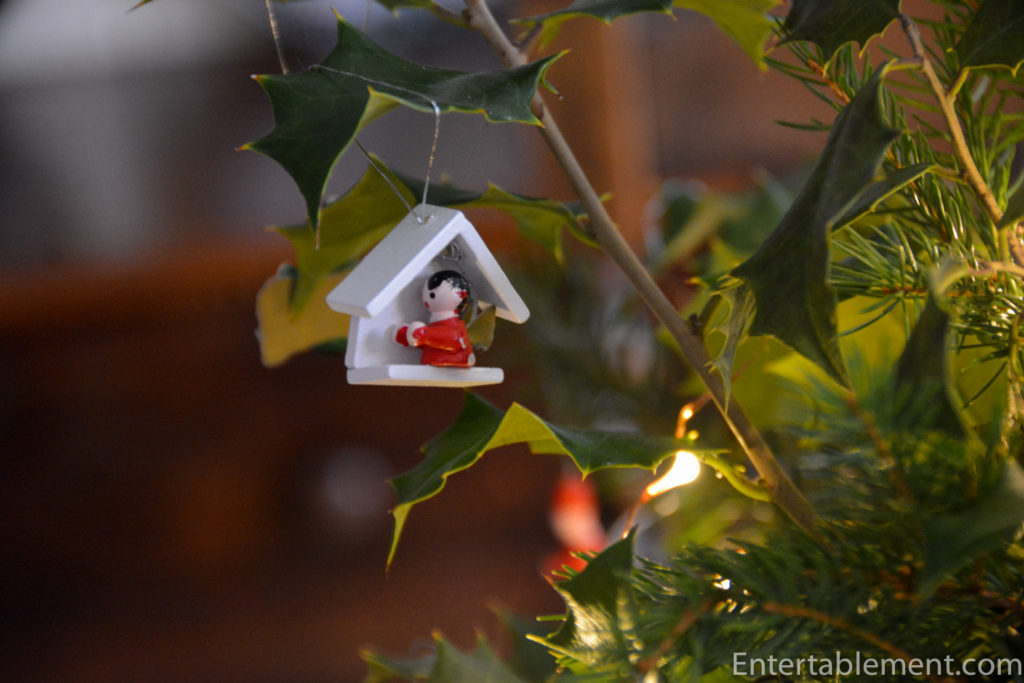 A pair of cardinals adorned a votive lantern, also from Pier 1. 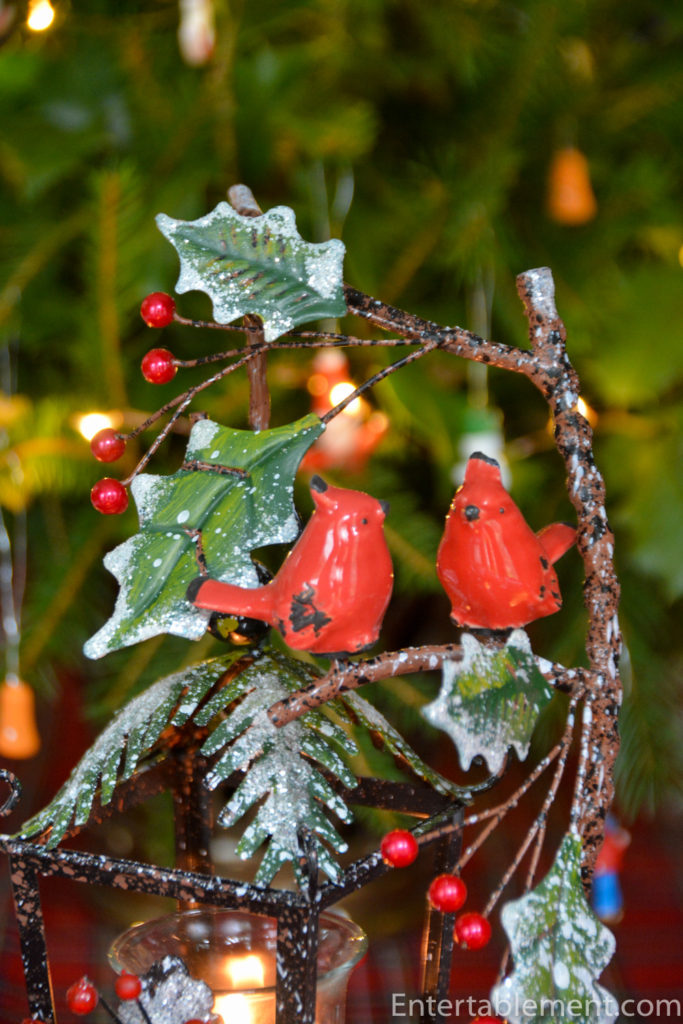 The plates start with a Gold Lustre charger from Pier 1. Next is the red-rimmed dinner plate from the Kenna Red set by Pfaltzgraff that I used for Canada Day earlier this year. Then we have a green Aerin Scalloped Edge salad plate. Finally, the stack is topped with the Garland Appetizer Plates from Pier 1 from last year. 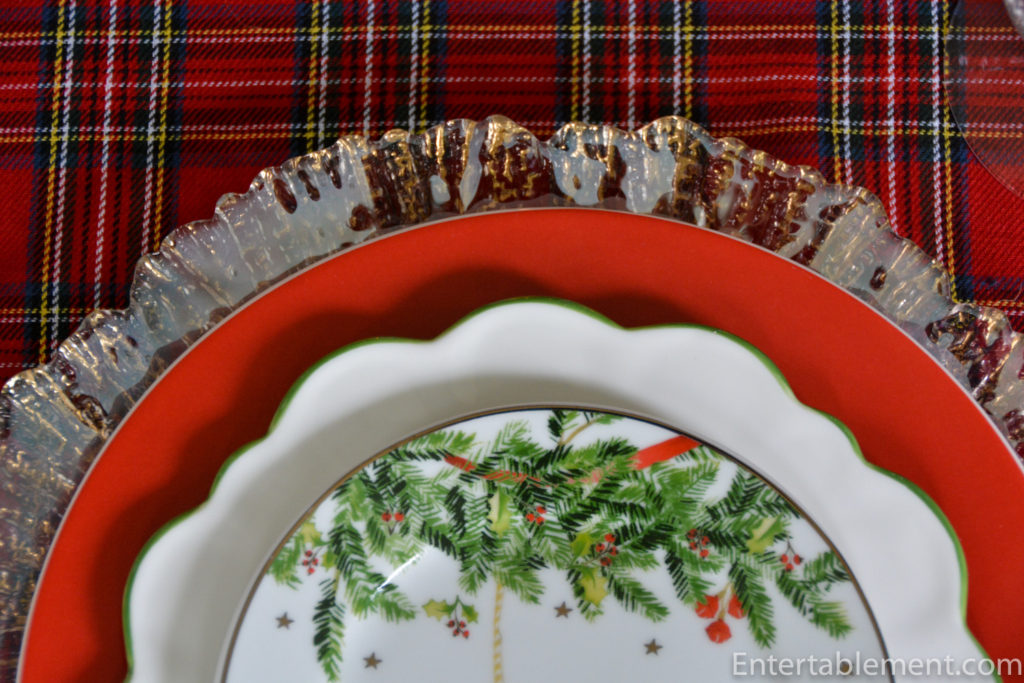 The flatware is rose-gold Twig from World Market. 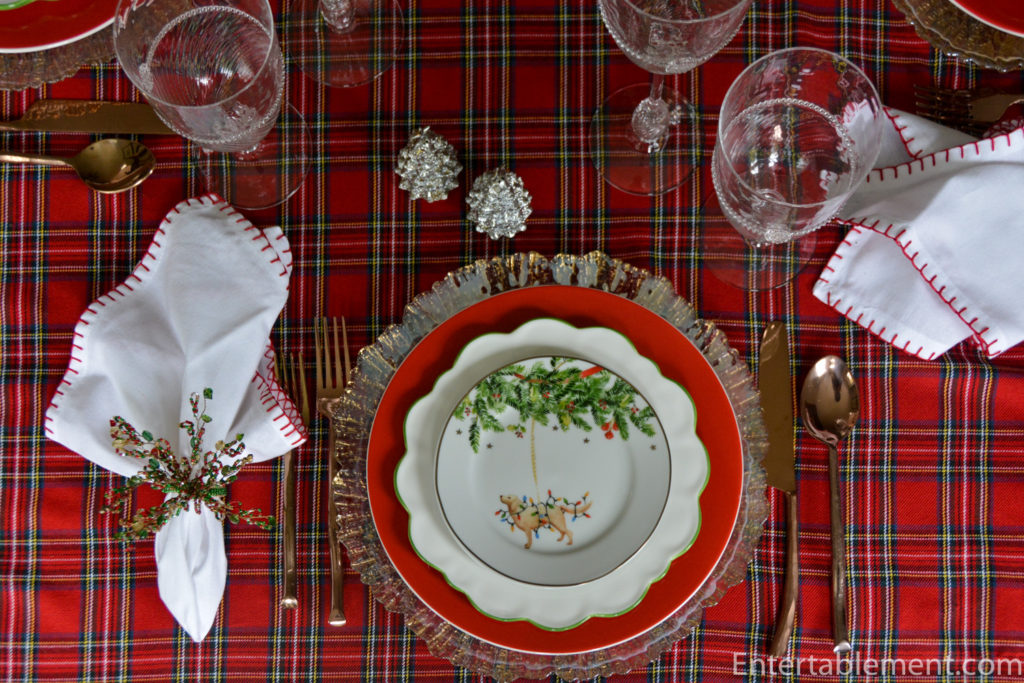 The red blanket-stitch edged napkin is from Homegoods, and the napkin ring is from Pier 1 a couple of years ago. 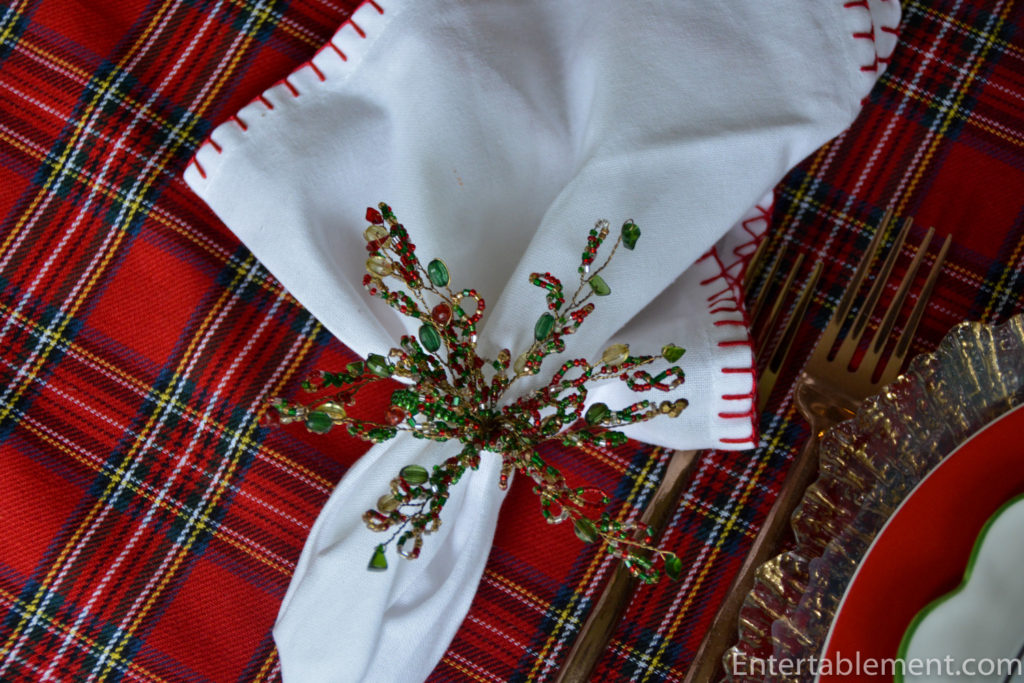 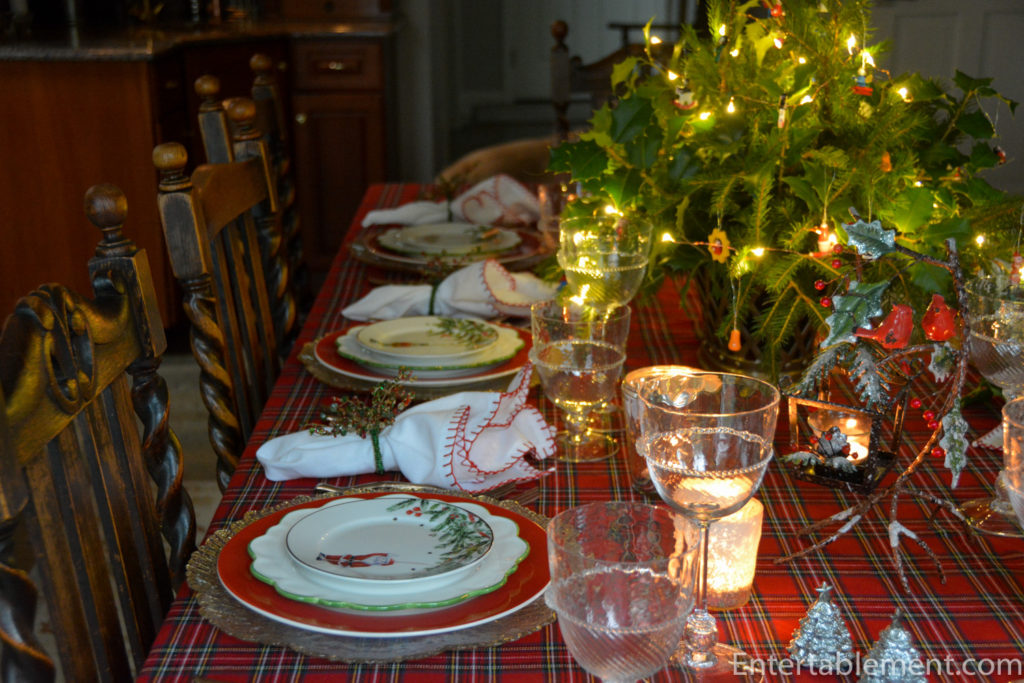 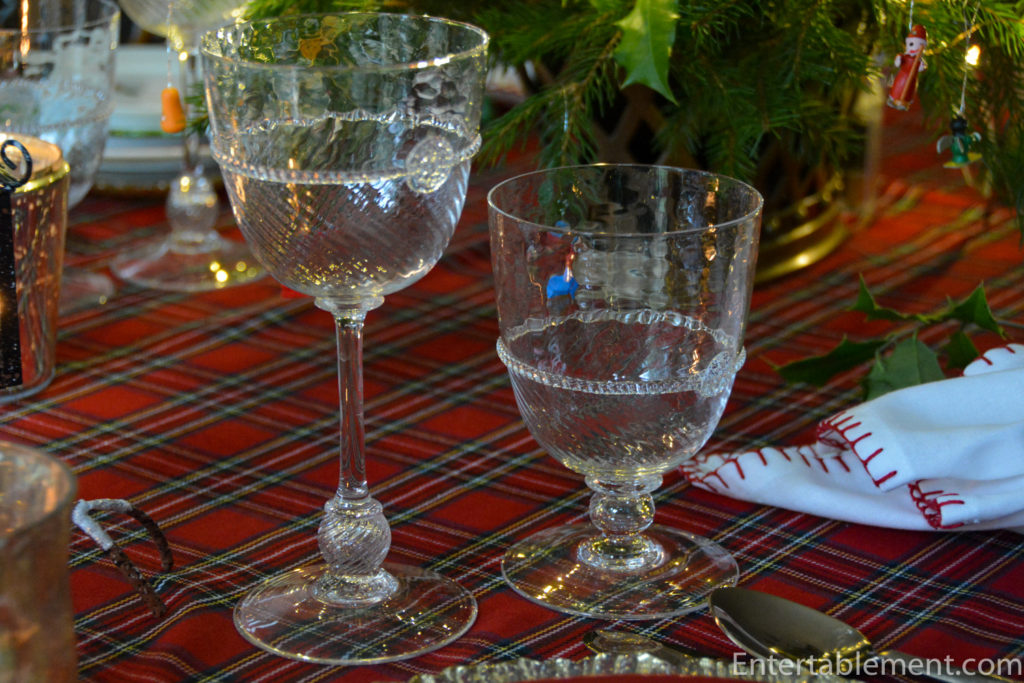 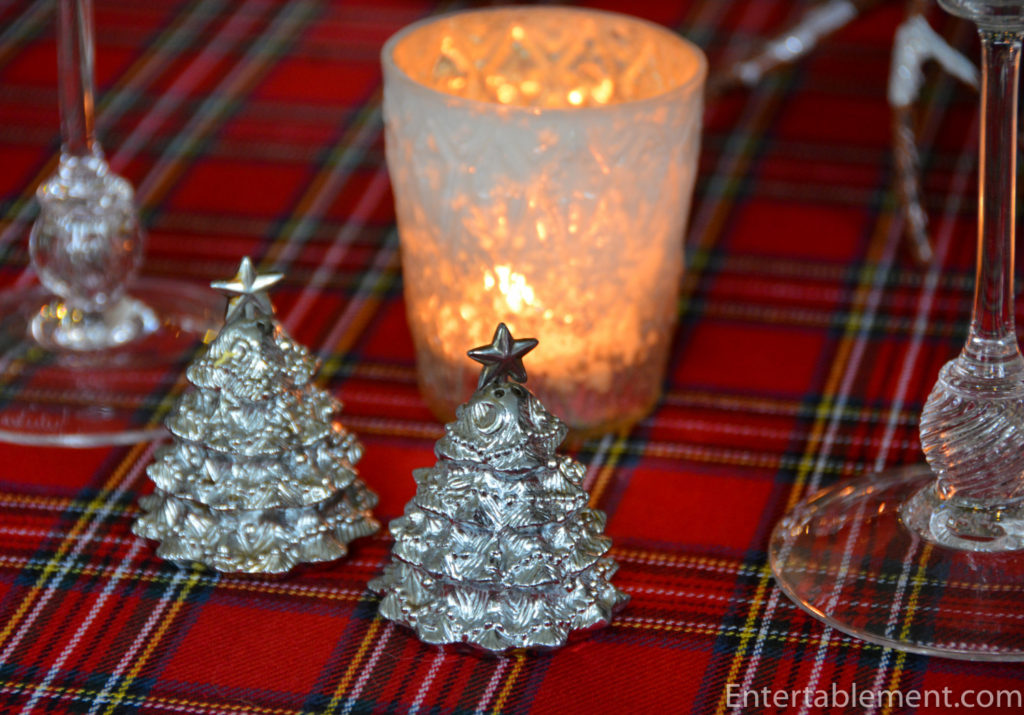 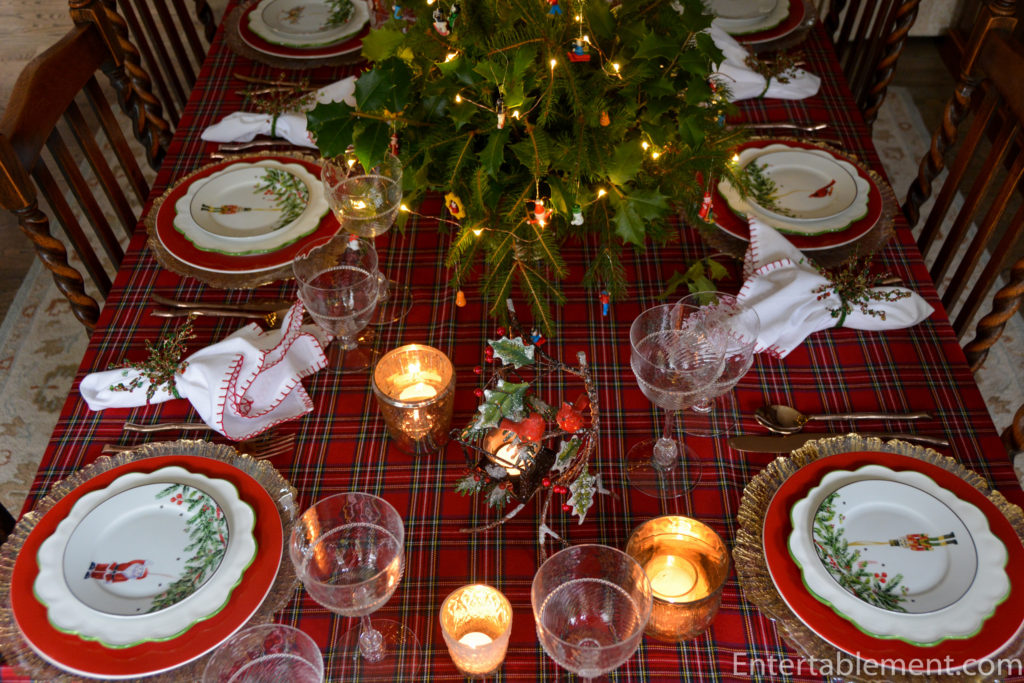 As we enter the final week to Christmas, with the New Year and all its loaded resolutions beyond, it’s both thrilling and sobering to contemplate how many impressions we are leaving with our children and grandchildren. In setting this table, I was reminded of how often it’s the smallest things that glue themselves into our memories. I remember the ritual of my grandparent’s little tree with enormous affection. I am so very grateful for the hours they spent with me, not so much in the “child-centred” way of today, but with a brisk, no-nonsense, “get on with it” attitude that conveyed confidence in my ability to manage and respect for my competence. They were truly a remarkable pair. Rarely a day goes by without me thinking of them, missing them, wishing I could fill them in on something or ask their opinion. They made an indelible impression. 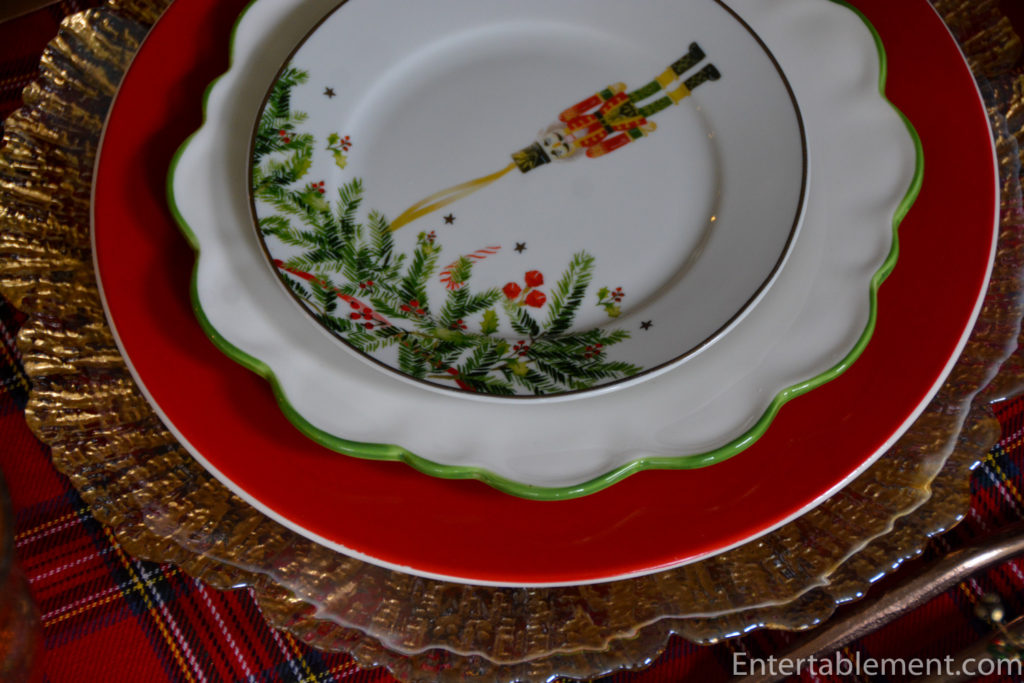 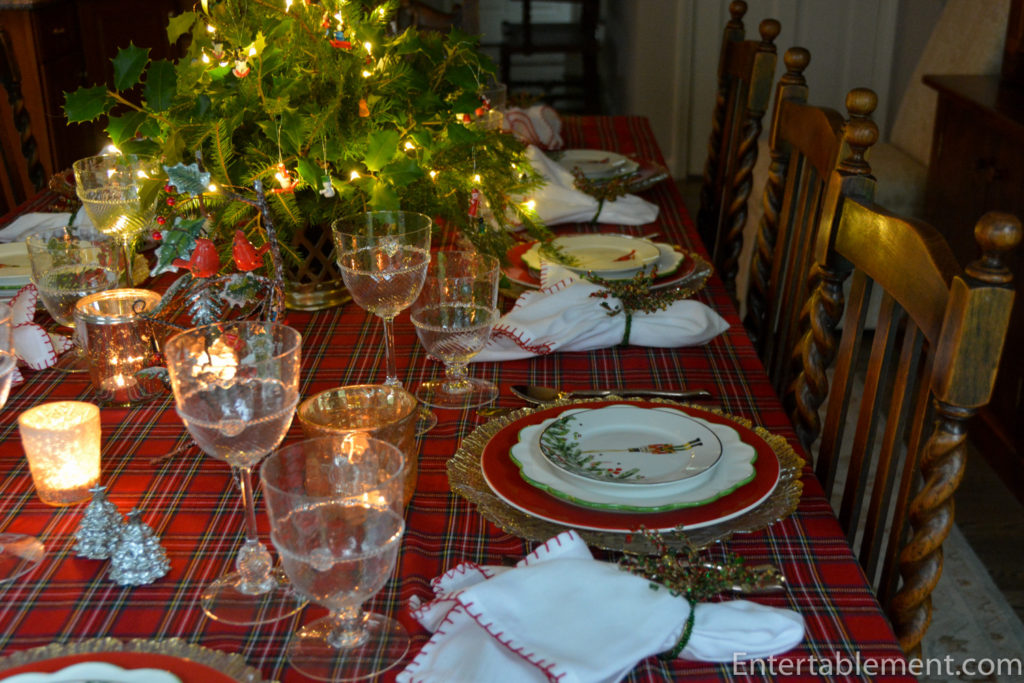