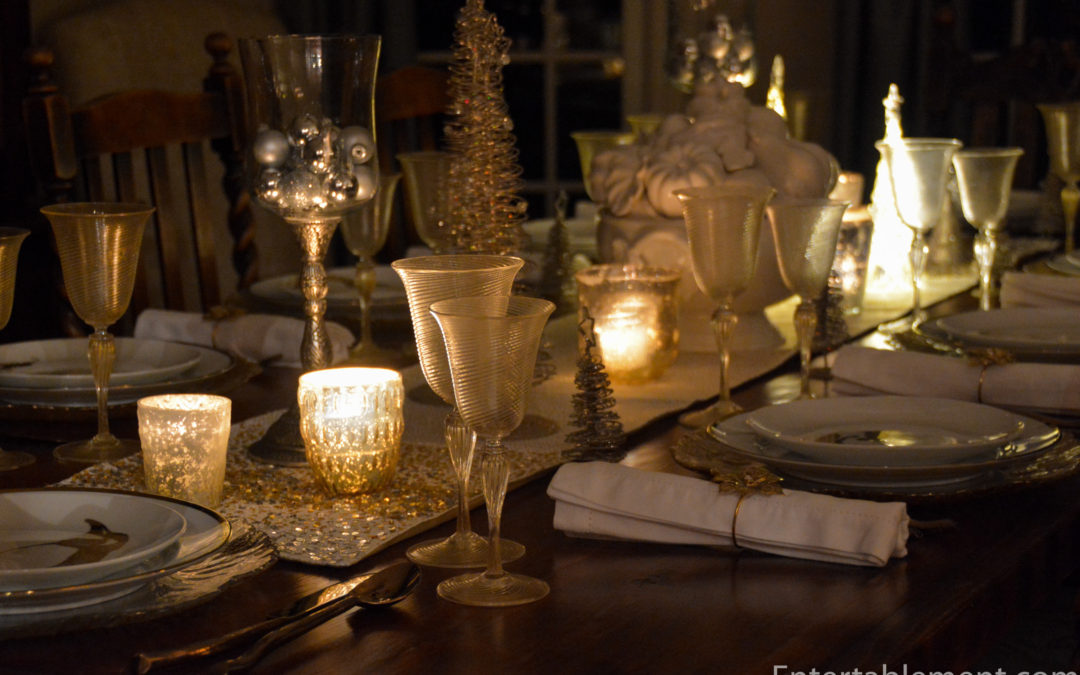 The glamour of gold and white for a formal table never fails to please. 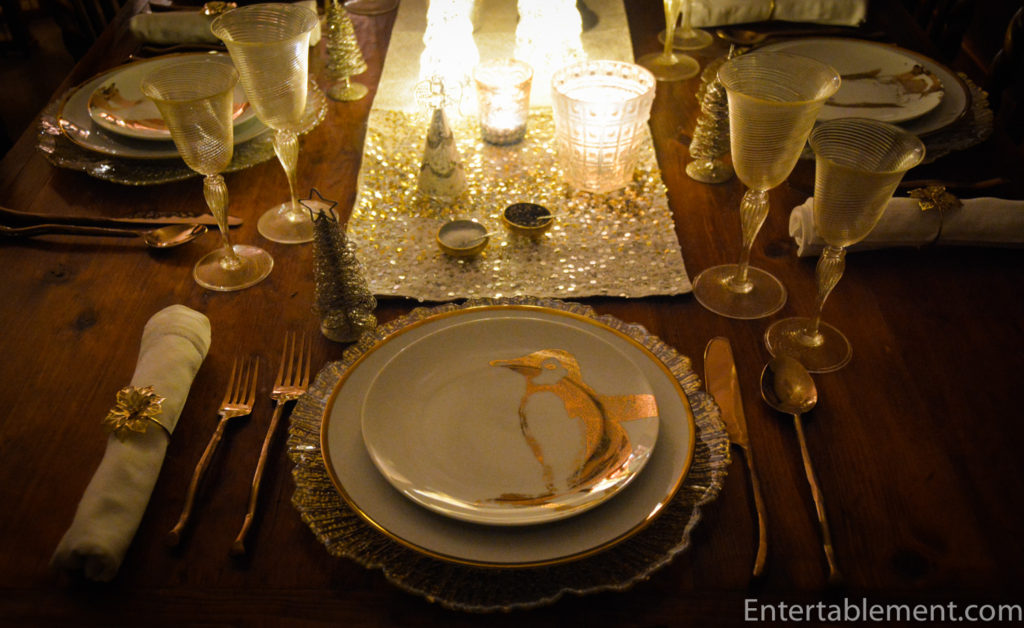 Add in gold, tuxedo-clad penguins and you’ve got a layer of fun with the formality. 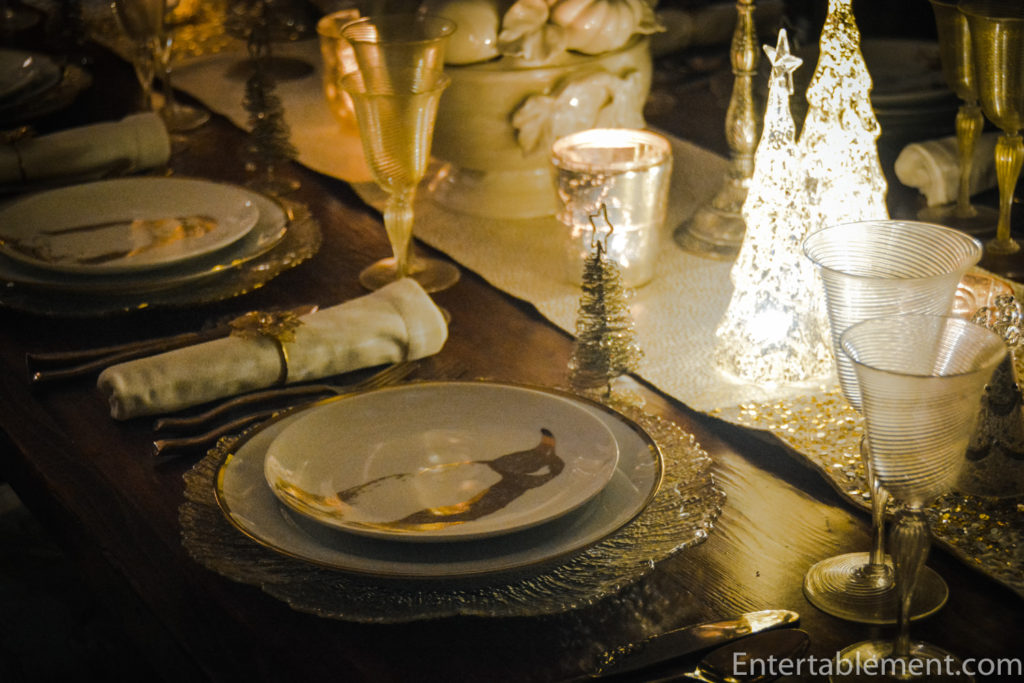 I can never resist penguins. They’re such silly birds – far more graceful in the water, of course, but so stiffly awkward on land. Much like men, unaccustomed to wearing tuxedos at a formal event, come to think of it. 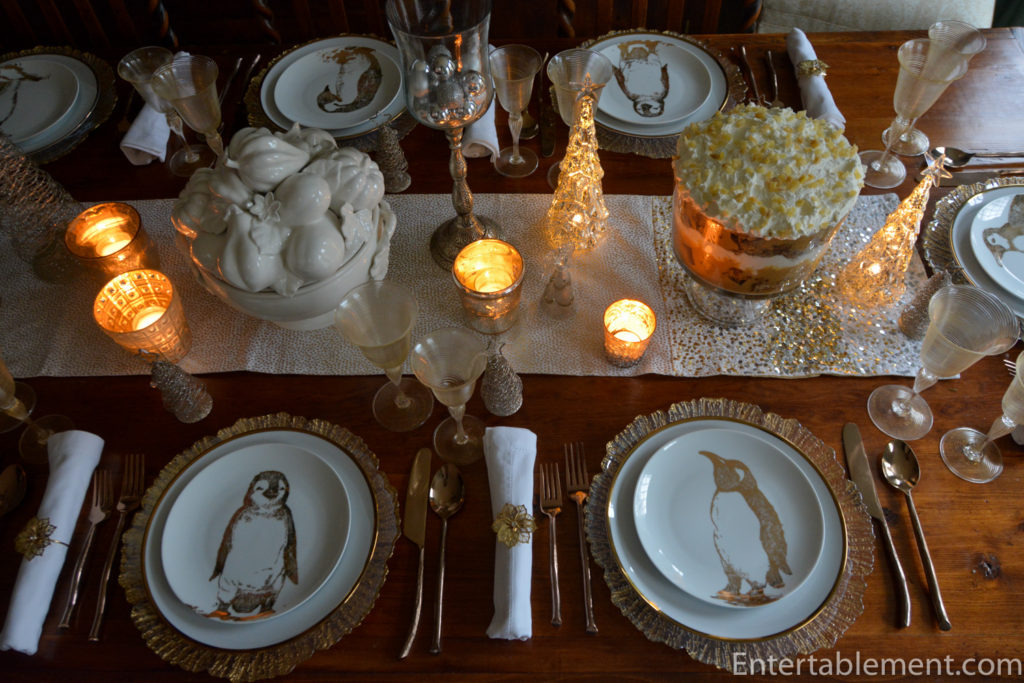 This one looks a bit doleful. Anticipating his hangover, perhaps? 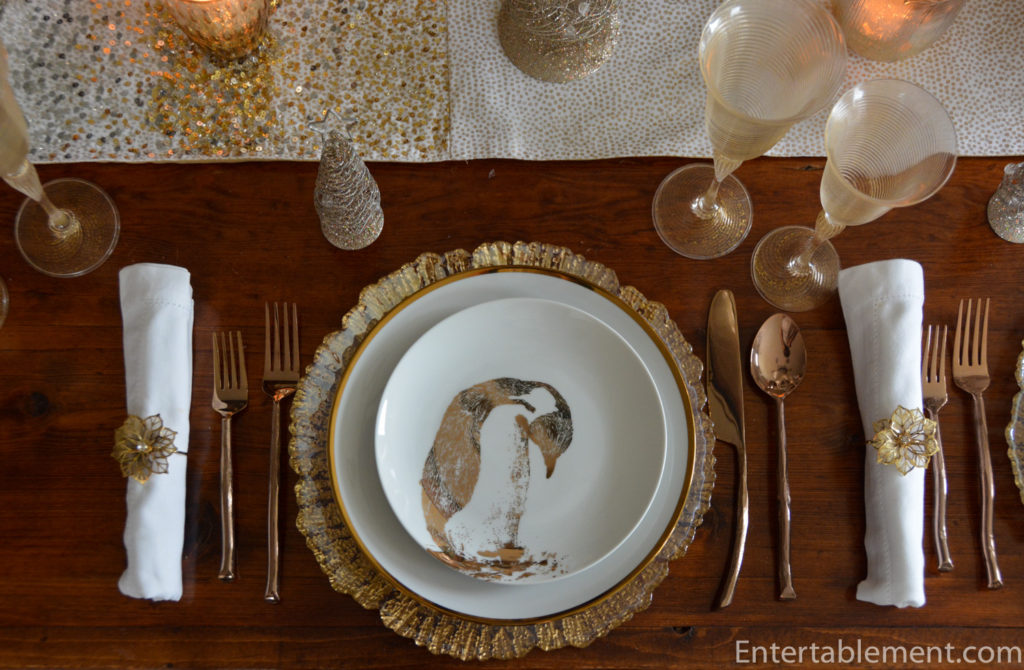 And this little guy looks like he’s ready for a nap. 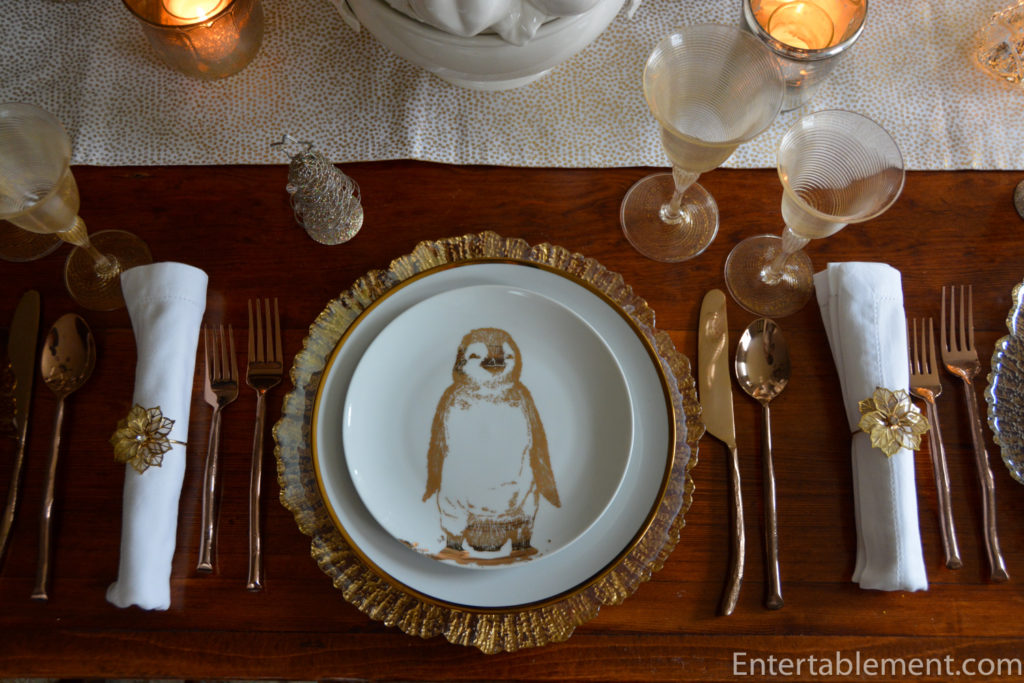 The inspiration for this table came from a blog written by One King’s Lane, Set a Spirited Scene with These Holiday Table Ideas. Here is their version. Isn’t it fabulous?

What caught my eye was the white centerpiece. It’s a covered tureen by Fitz & Floyd and I’ve had two of them for years, never quite knowing how to incorporate them in a table. They’re part of the Bristol collection, now discontinued. I didn’t have the fabulous panelling backdrop to work with and there are limits to how far I am prepared to go in hauling furniture around. 🙂  So I set up in the dining room and had a go at producing a similar table. 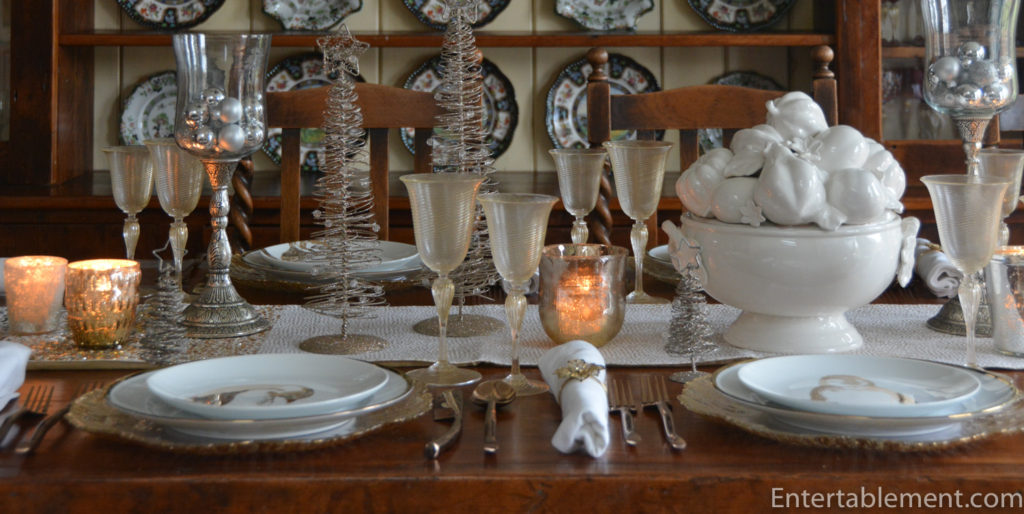 I managed to get this shot by crawling onto the counter in the kitchen and resting the camera on the top of the half wall separating the kitchen from the dining room. Not very dignified but it did get a much wider frame.

Pier 1 supplied the lighted trees, bottle brush trees, penguin plates, and runner (all from this season). The gold lustre chargers are from previous years and often available. They seem to be sold out of them right now, but they have a beautiful blue version currently on sale. 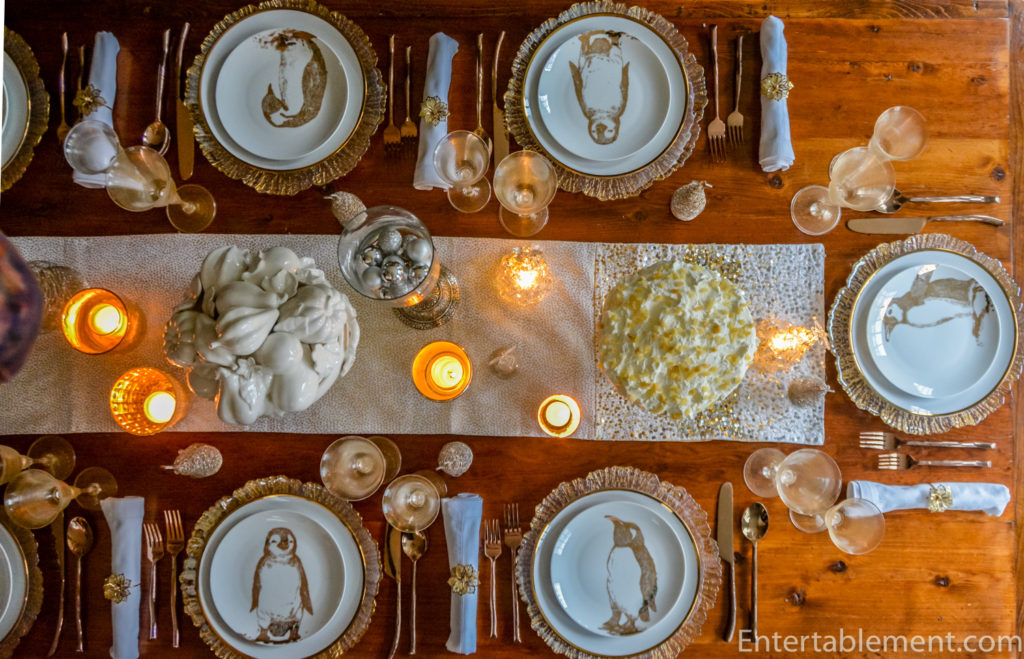 I set the table much earlier in the season and used it as a backdrop for the Sticky Toffee Trifle. 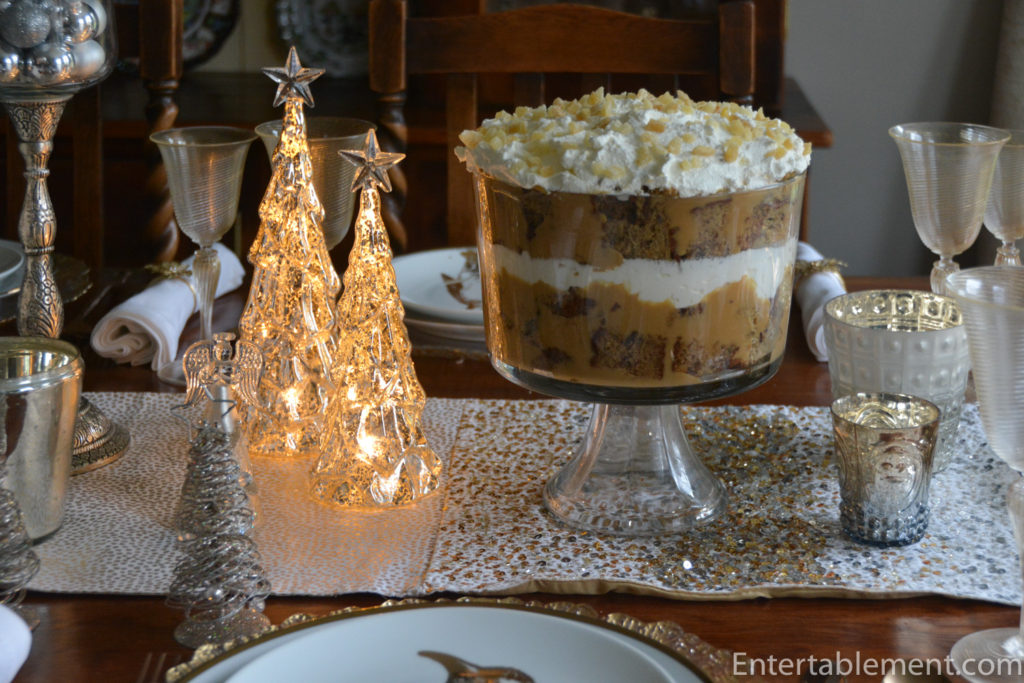 At the time I thought it would make a great setting for New Year’s Eve. 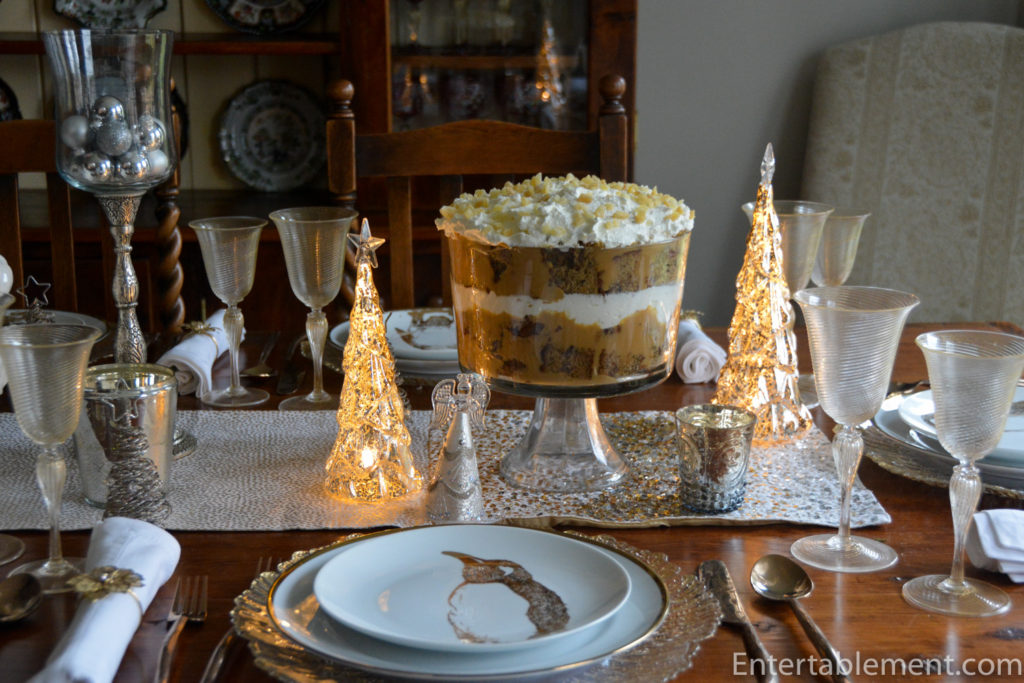 How much fun are happy penguins? 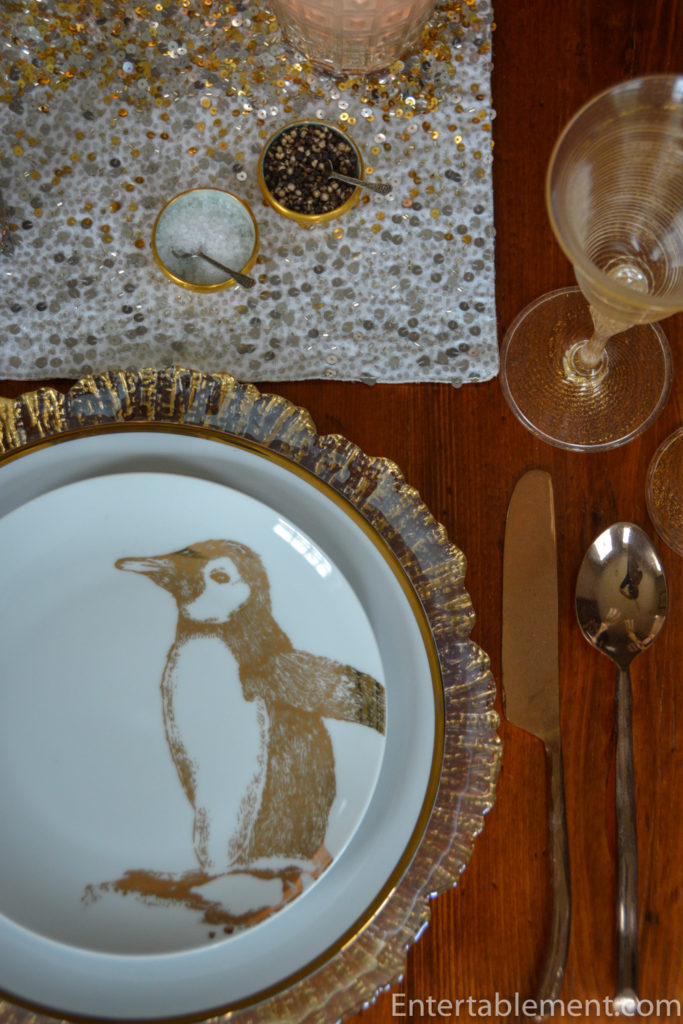 The flatware is Rose Gold Twig from World Market. 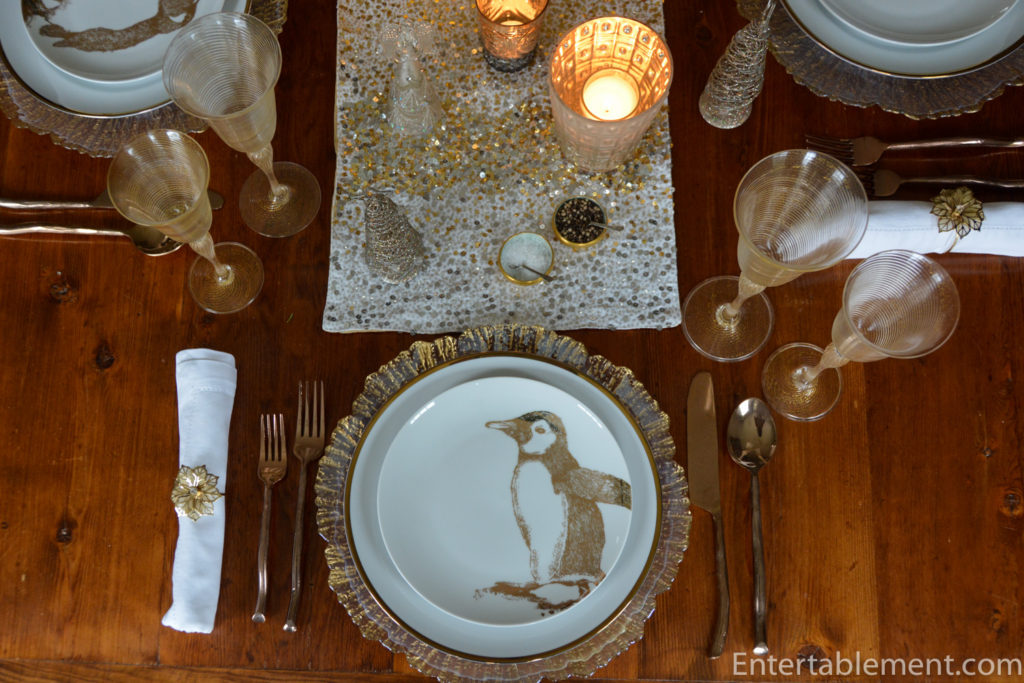 I think I’m going to get a lot of use out of those trees over the years. They’re classic. 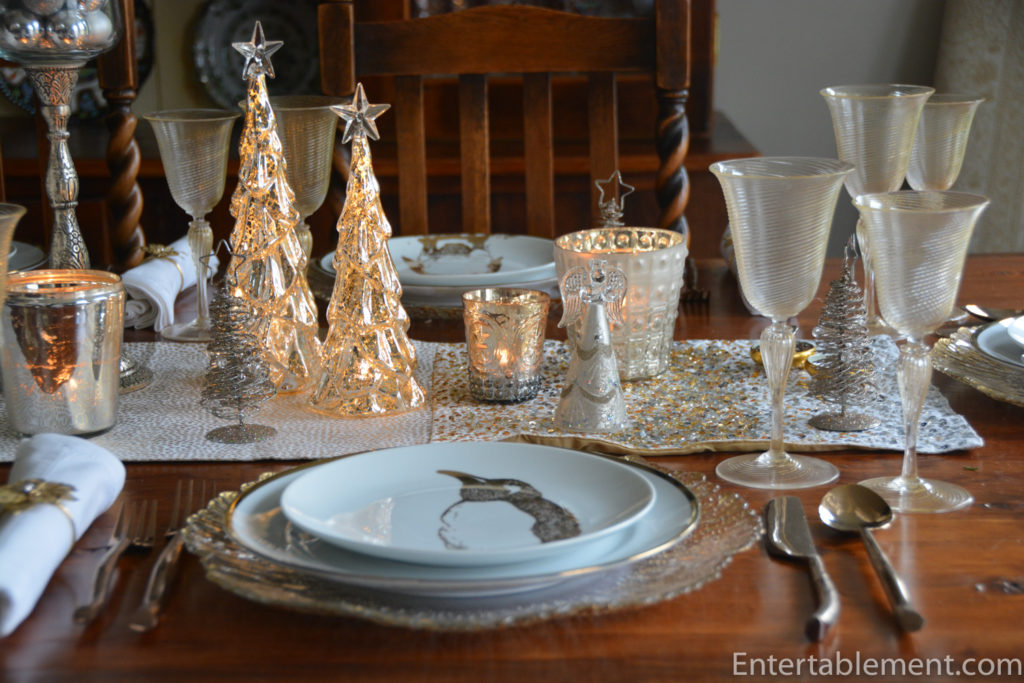 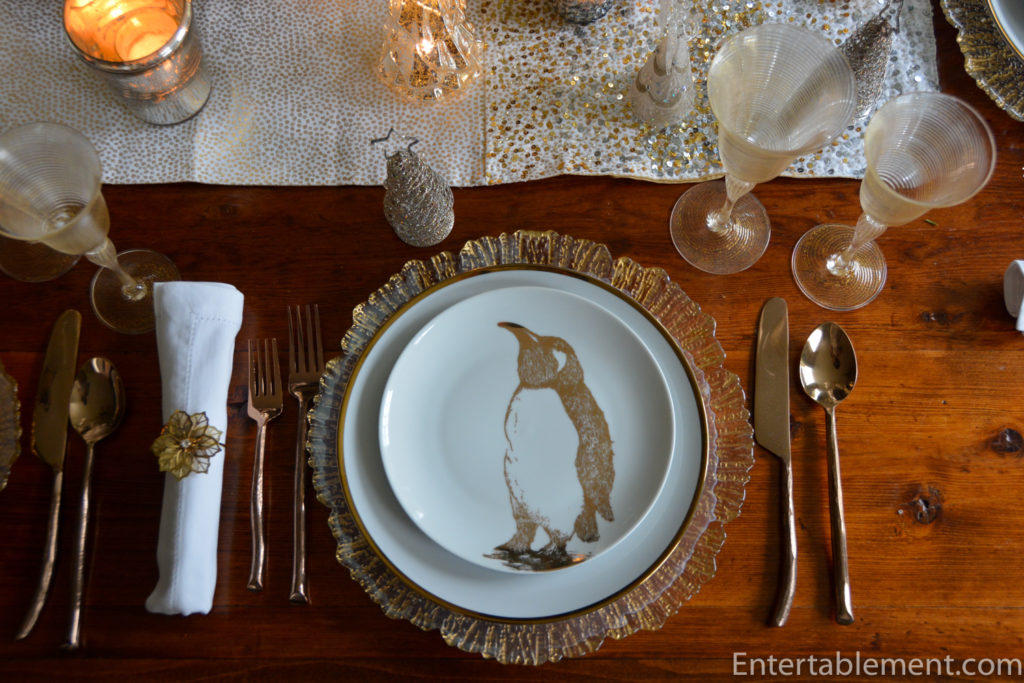 And this guy is definitely my favourite. He looks like he’s saying “goody, goody!!”. 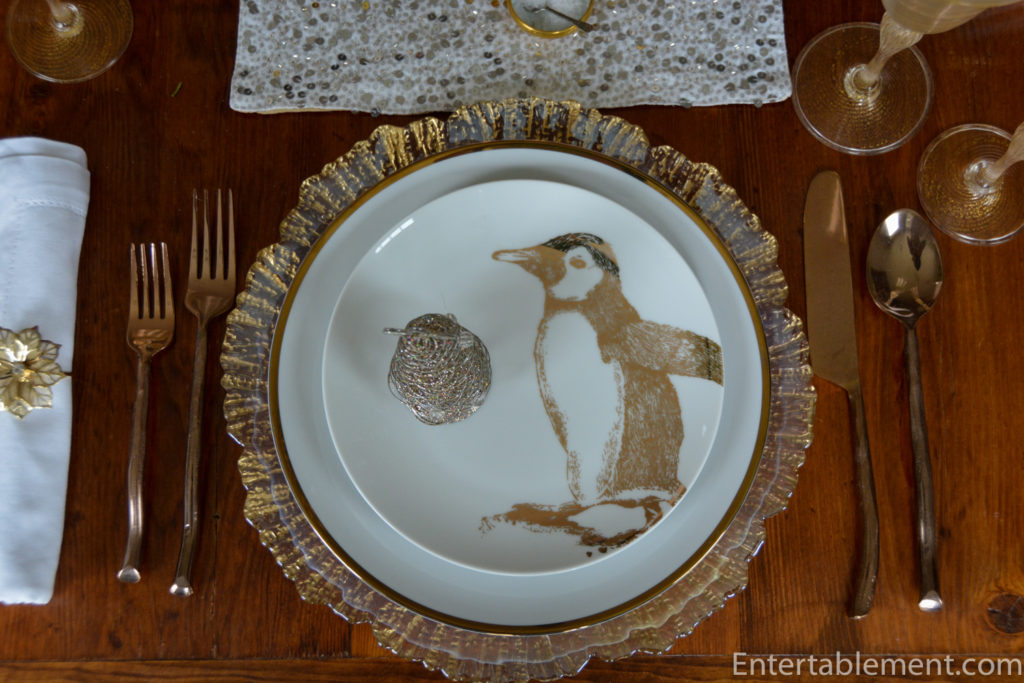 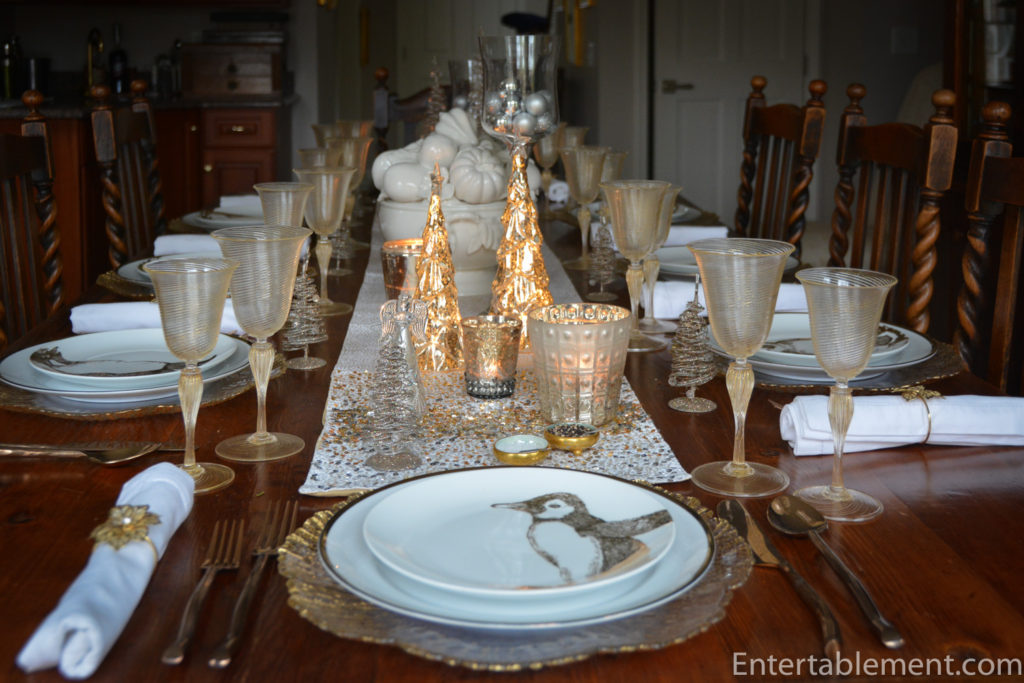 I use these gold twist Venetian glasses frequently. They’re from Elise Abrams Antiques and I’ve had them for years. 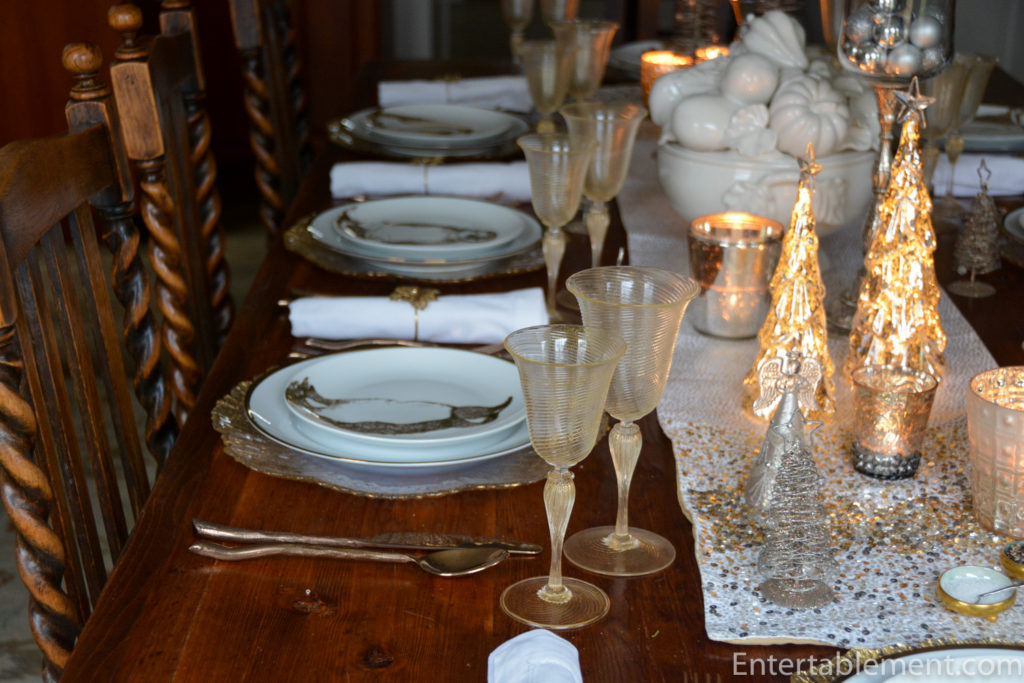 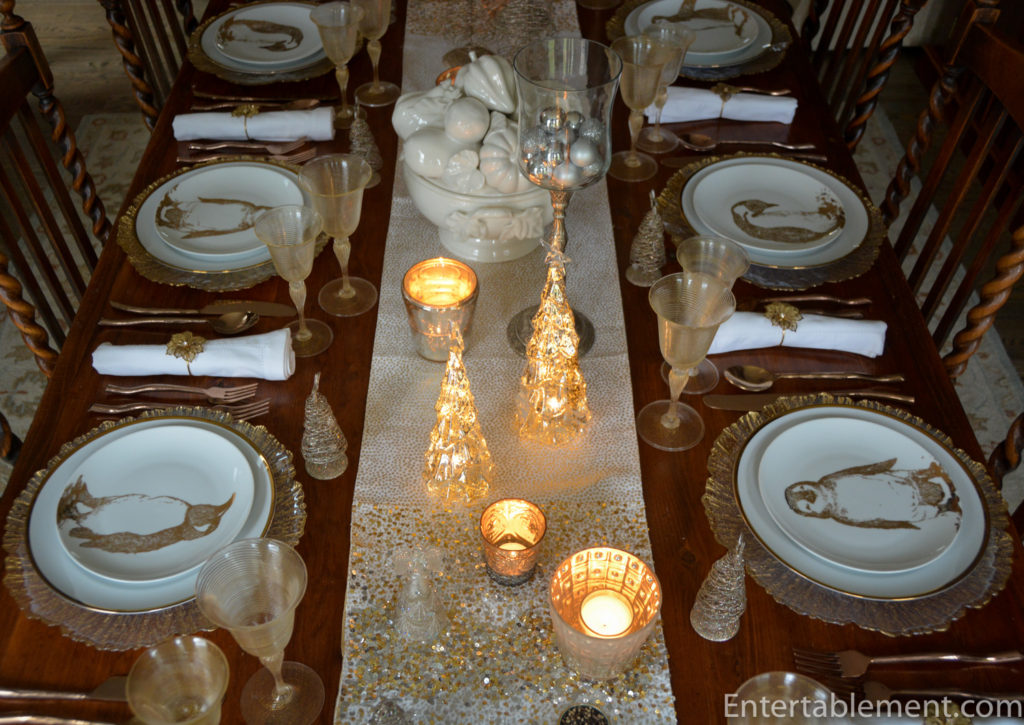 I’ll leave you with a couple more shots of the table at night. 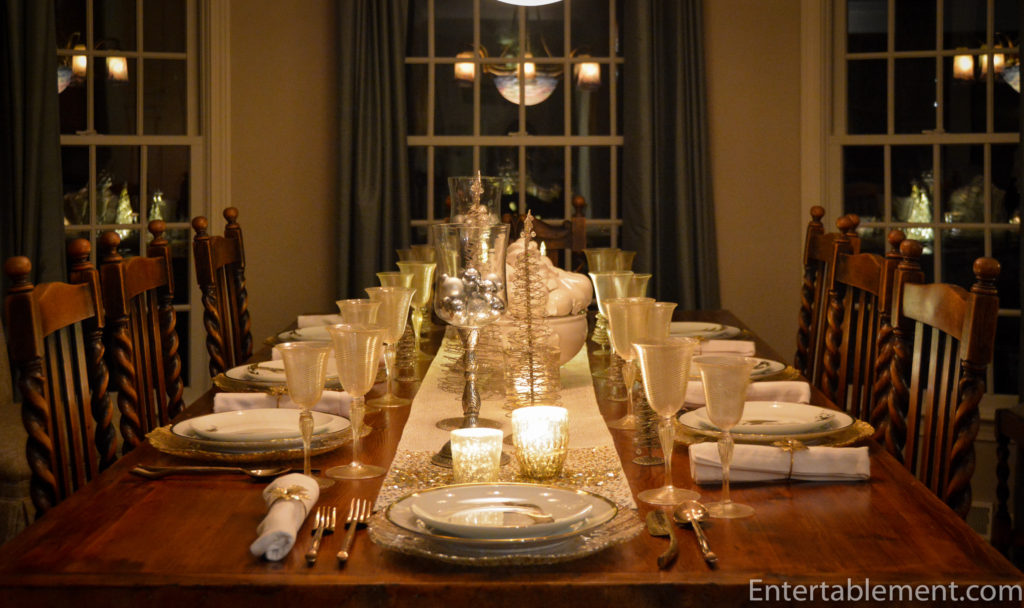 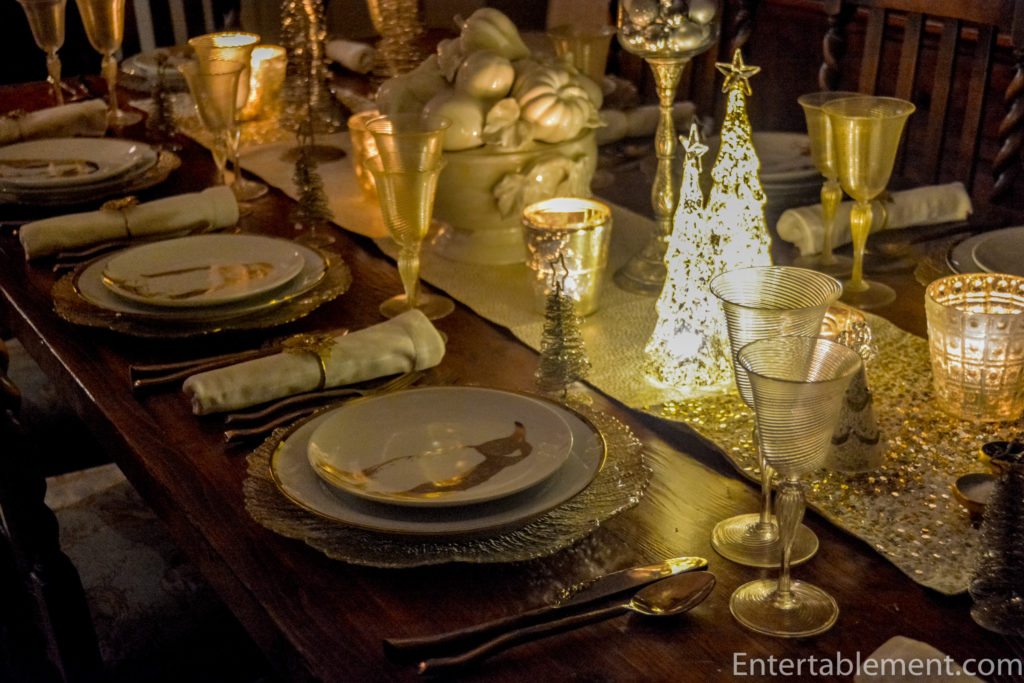 I hope everyone had a wonderful New Year’s Eve and wish you all the best for the coming year. We are beginning a new decade, not only a new year, so it feels quite momentous. What will the next ten years bring, I wonder? One writer in The Telegraph described the last decade as the “terrible tens”. Rather a bleak summary, I thought, but it’s catchy. Not as fun as the “swinging sixties” or the “roaring twenties”, so let’s hope we can do better with this coming ten years.