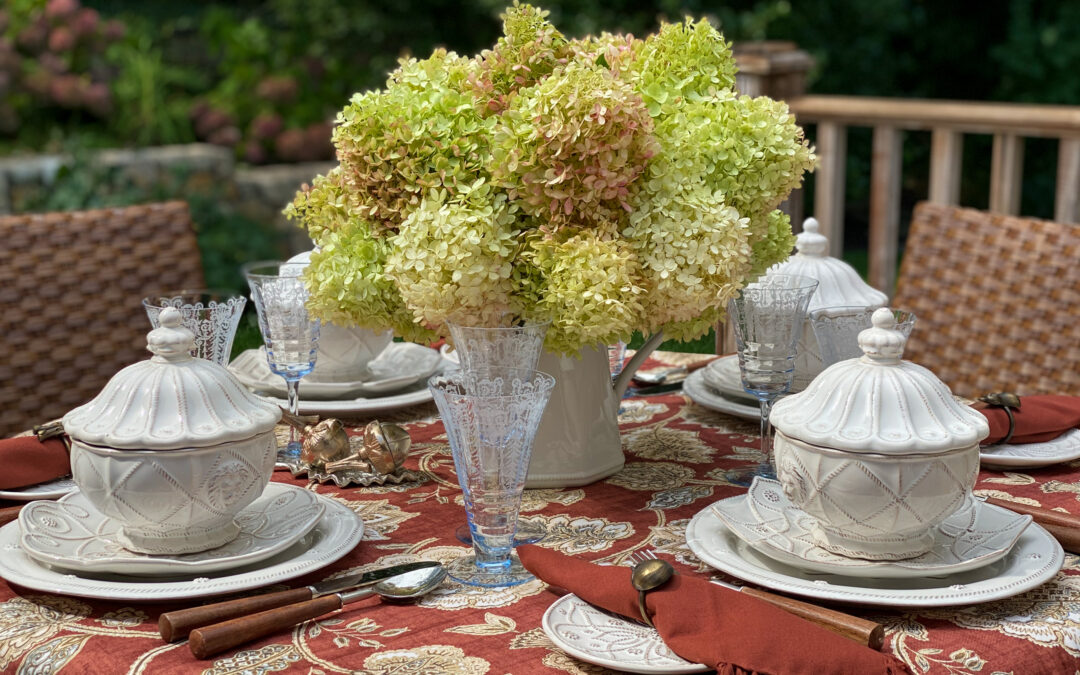 As long-time readers of the Entertablement Blog know, I’m a big hydrangea fan. While I favour the big, floppy mopheads in all of their glorious colours, I also have a soft spot for the cone-shaped Pee Gee variety. The prolific paniculata really comes into its own later in the season when the petals morph from creamy white to a delightful bronzey pink. Before we left the Cape, I picked a huge bunch and plopped them into a white ironstone jug to admire. All was well for a couple of days. Then the fuss began. 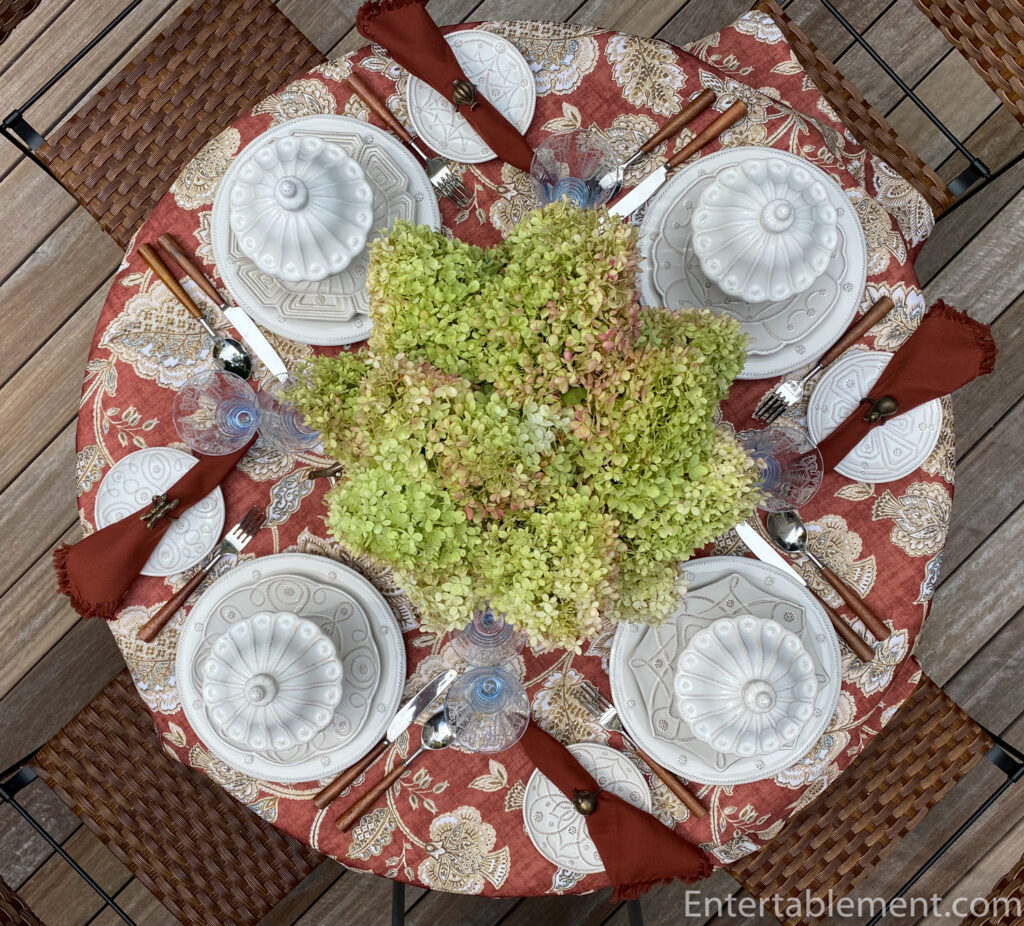 Why are we just sitting on the counter? They whined. We heard that flowers got photographed around here! What are we? Lousy weeds? No! We are not! We are Magnifique!!! Fine, I muttered. Bad enough that I get bossed around by dogs, cats and teddy bears. Now it’s the foliage, too? 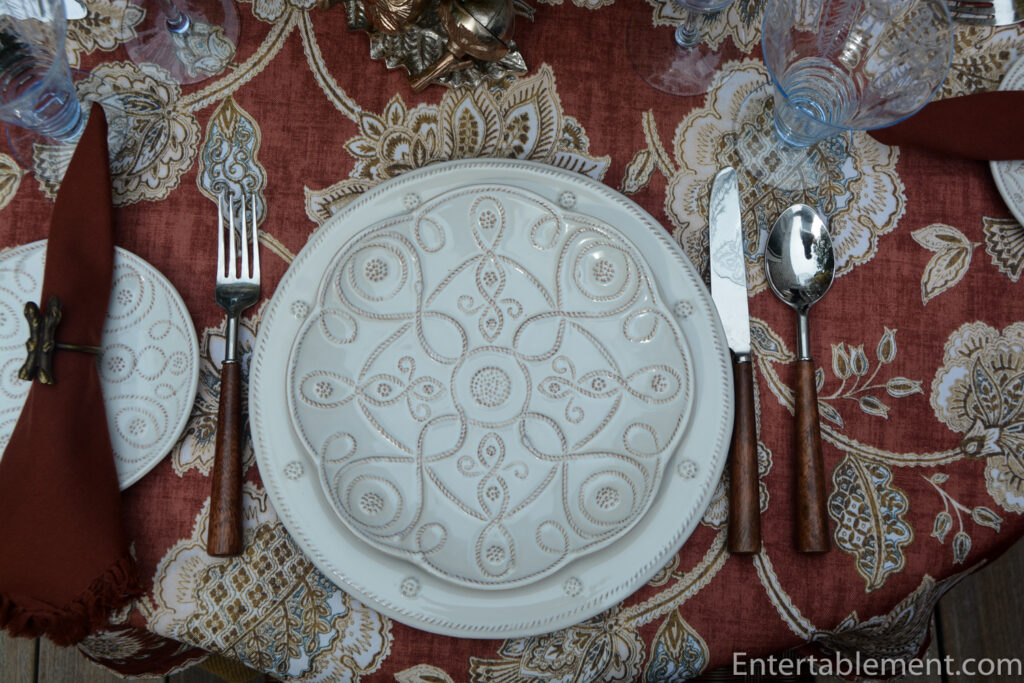 I played around with a couple of different tablecloths to see which one best set off the hydrangea; they were clamouring to be front and centre. The rusty tones in this paisley cloth from HomeSense ago struck me as the best choice. 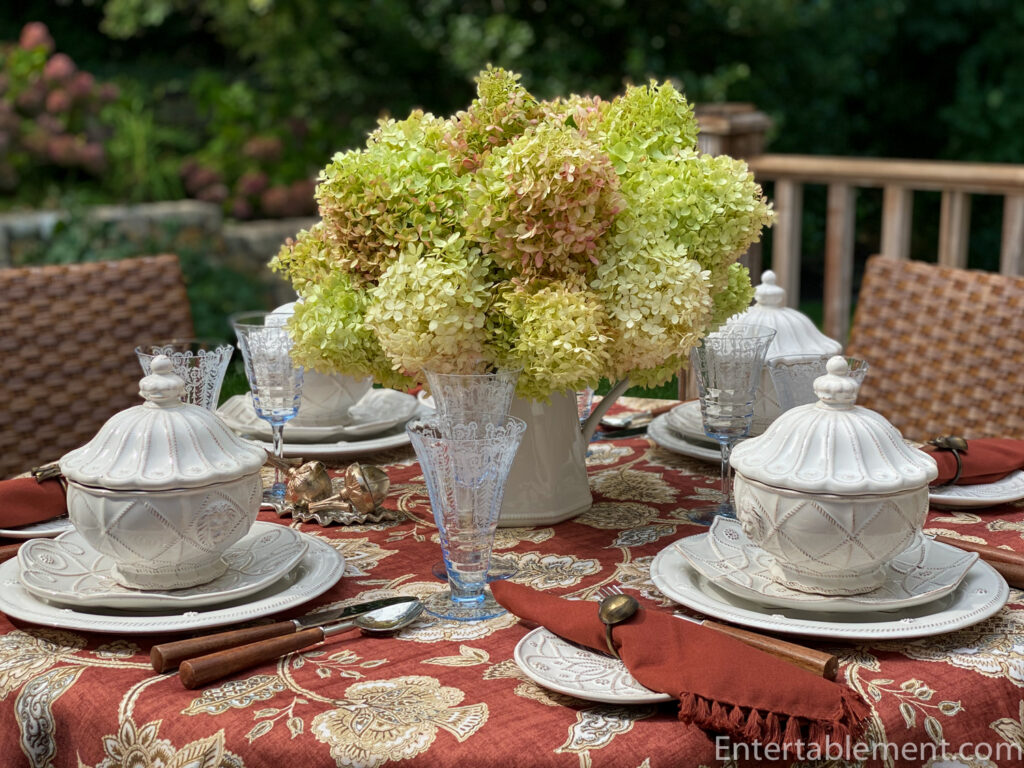 I pulled out the full Monty of Juliska Berry and Thread dinnerware, along with some pieces in the sister pattern, Jardins du Monde. The latter is named after four famous gardens in Europe: Landriana in Italy, Villandry in France, Alcazar in Spain, and Heligan in England. There are four salad plates in different patterns and shapes. 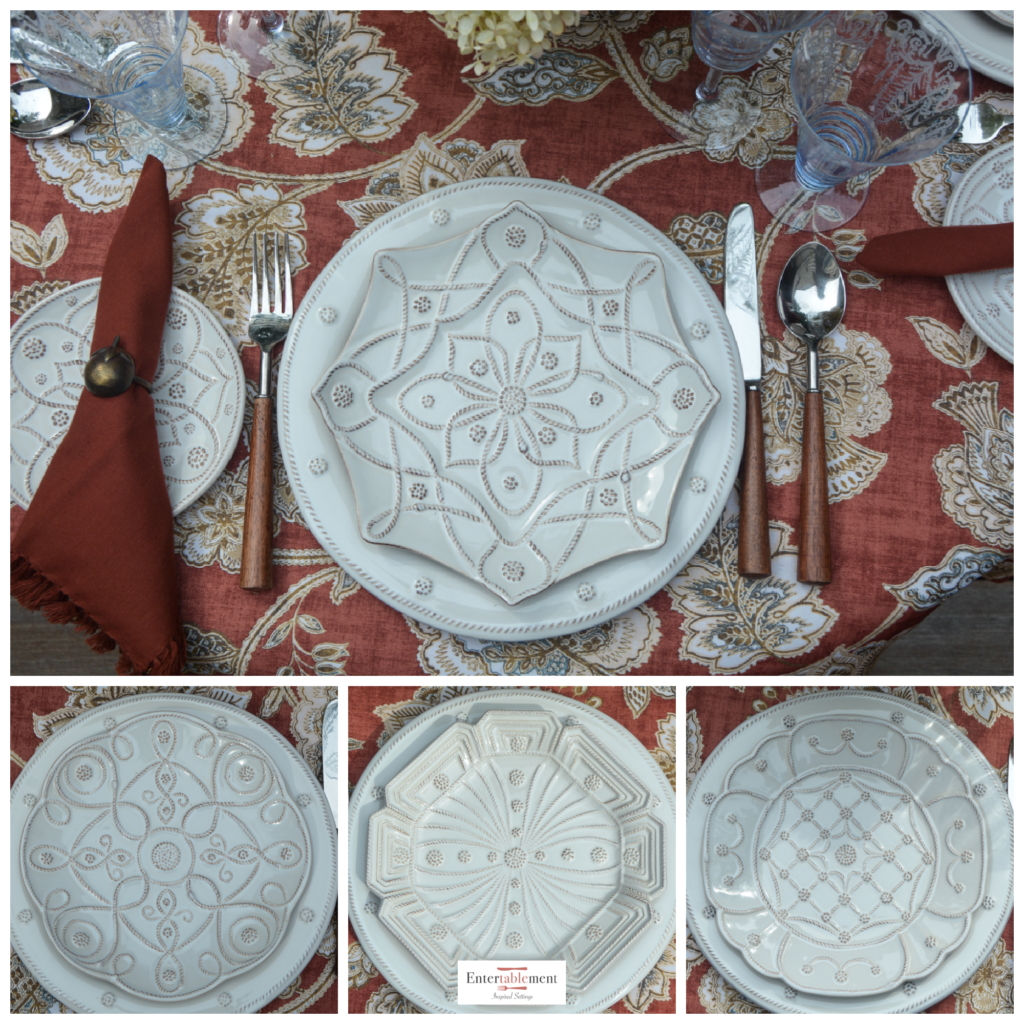 The four canape, or appetizer plates (discontinued), are all roundly shaped. 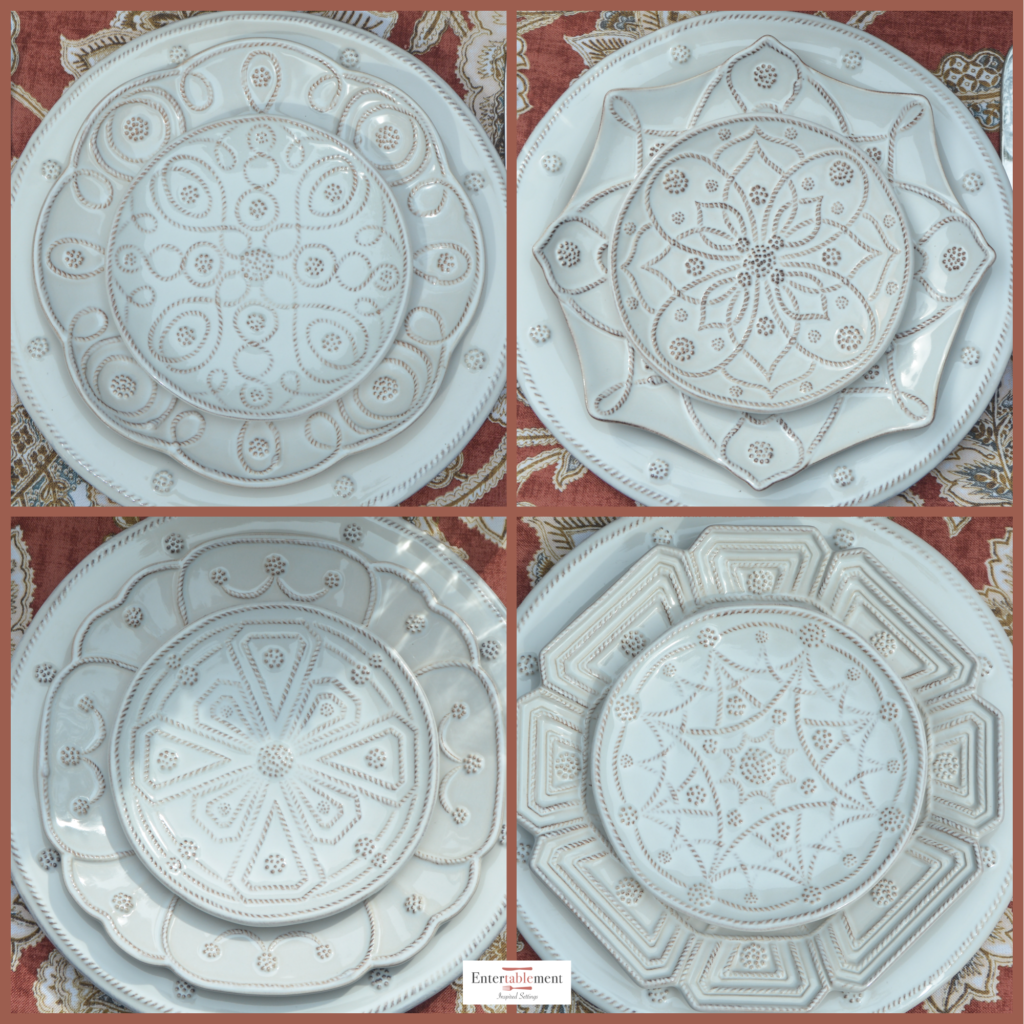 With the weather turning nippy enough to colour the Pee Gee hydrangeas, my greedy tummy hankered for soup. Fall Brodo, to be precise. What could be more fitting (or filling)? Acorn squash, swiss chard and farfalle pasta swimming in flavourful chicken broth, topped with crispy bacon bits and Parmesan shavings. Yum! 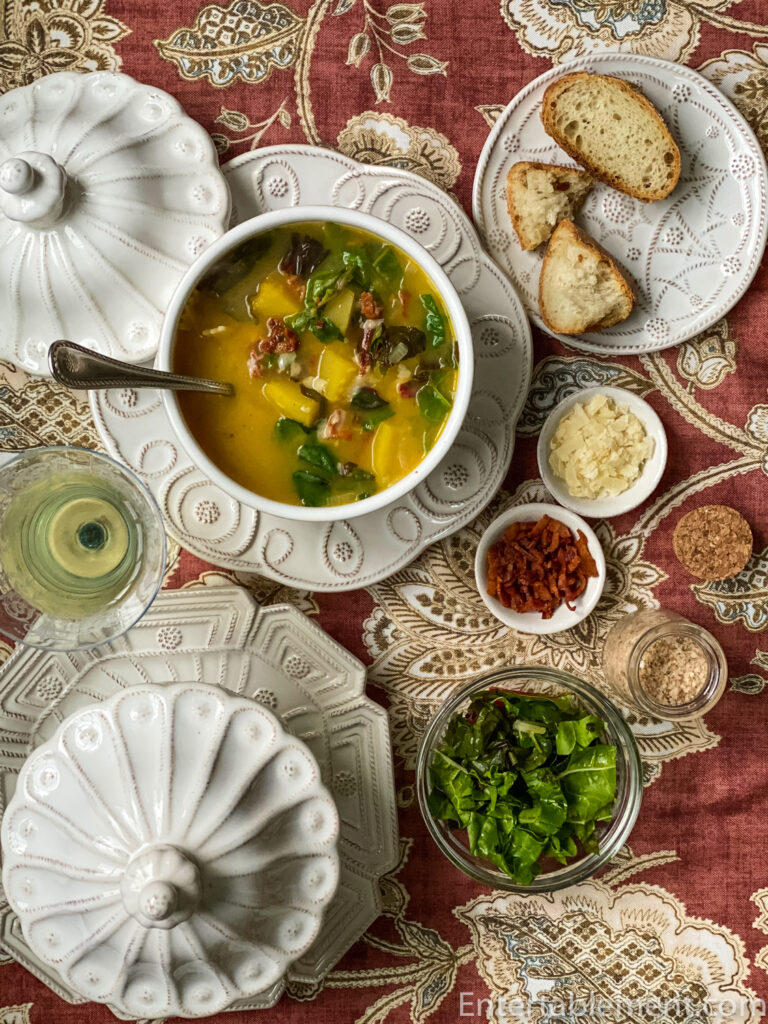 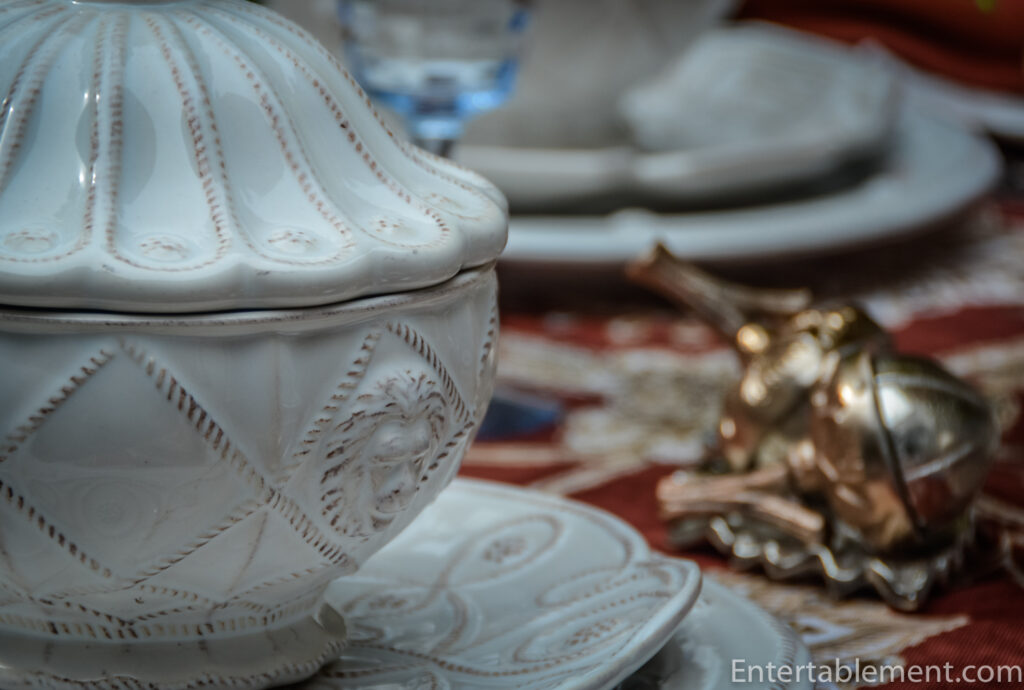 Elegant Depression iced tea and water goblets in the Cleo blue pattern by Cambridge picked up the faint blue accents in the tablecloth. 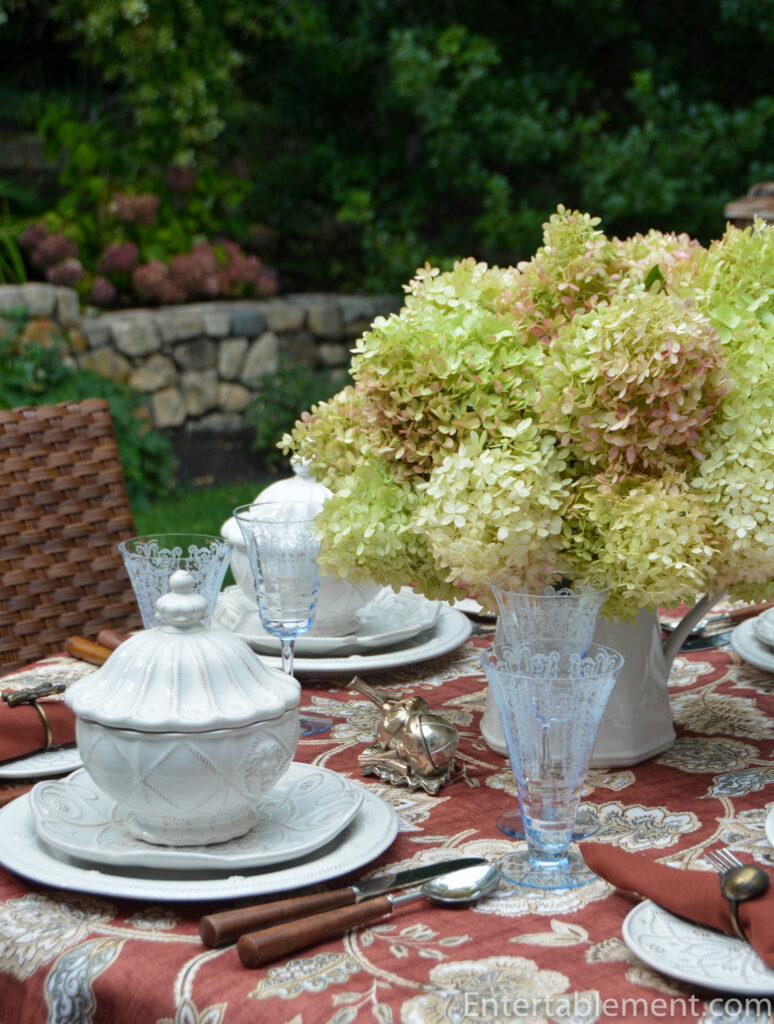 The glasses have an unusual octagonal shape; it’s quite subtle but provides an additional element of visual interest. The iced tea glasses are generously sized (we use them for water), and the round stem of the water glass (we use them for wine) sits smoothly in the hand. This particular pattern is difficult to track down. I’m still on the hunt for more of both sizes, but so far, no luck. 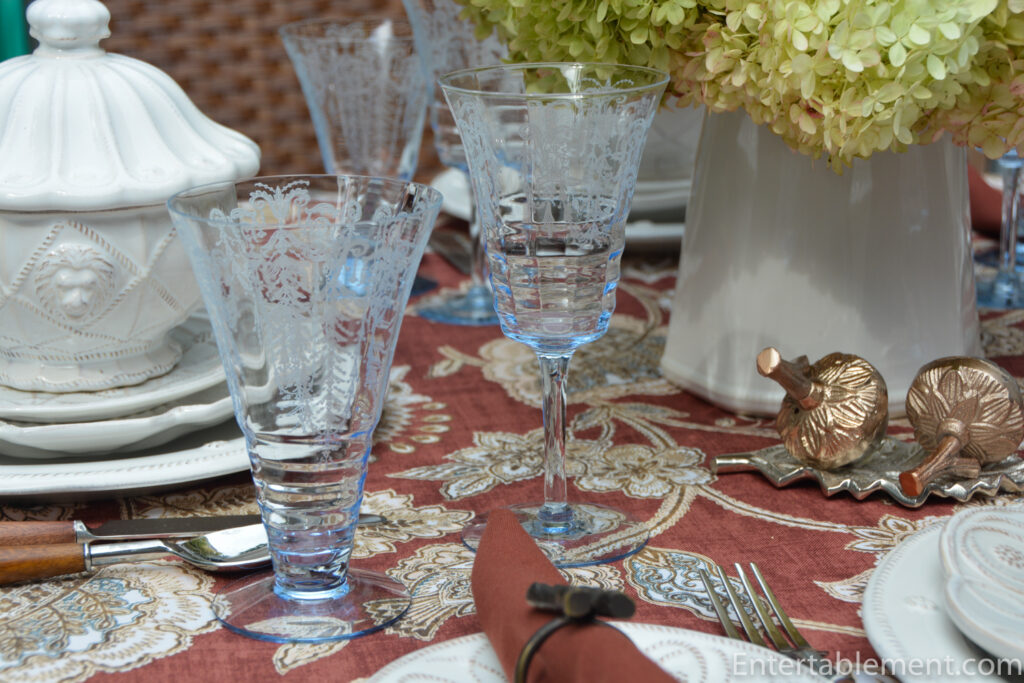 With the boisterous tablecloth and intricate patterns on the plates competing for attention, I chose a subdued, solid coloured napkin in a toning shade of rust. Bronze napkin rings in the shape of vegetables behaved very discreetly. You’d barely know they were there. 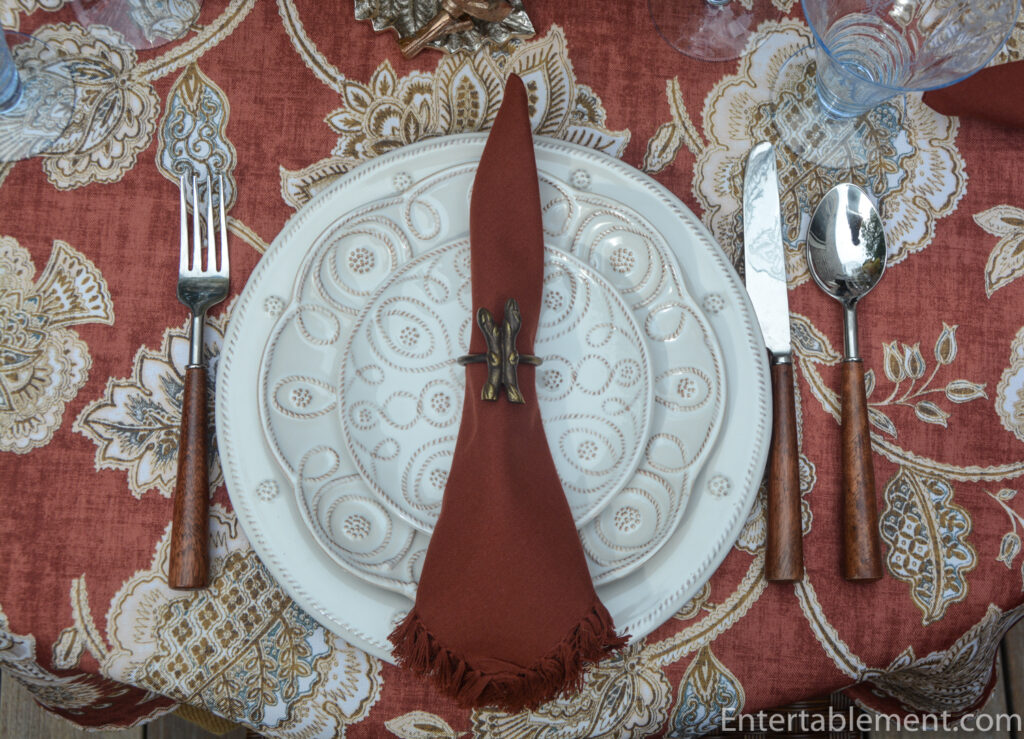 I’m hazarding a guess we have asparagus, onion/garlic, squash (or perhaps a tomato??) and aubergine, but the shapes do lend themselves to some creative interpretation. They are not to scale, either (can you imagine?) Beauty is in the eye of the beholder with these guys. 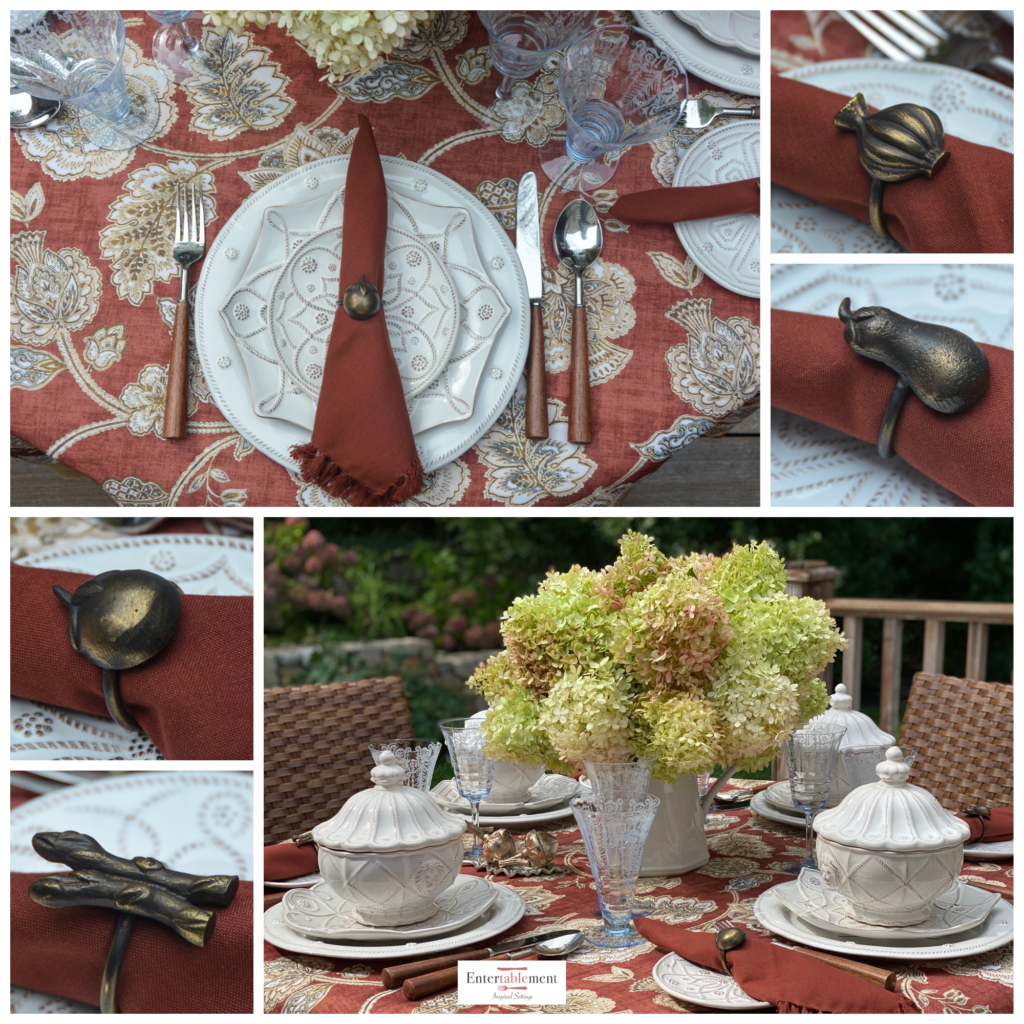 Ok, Pee Gee hydrangea. Are you satisfied with your glamour shot? Please do not pout when you return to the kitchen counter; bloom where you’re planted (or plopped). 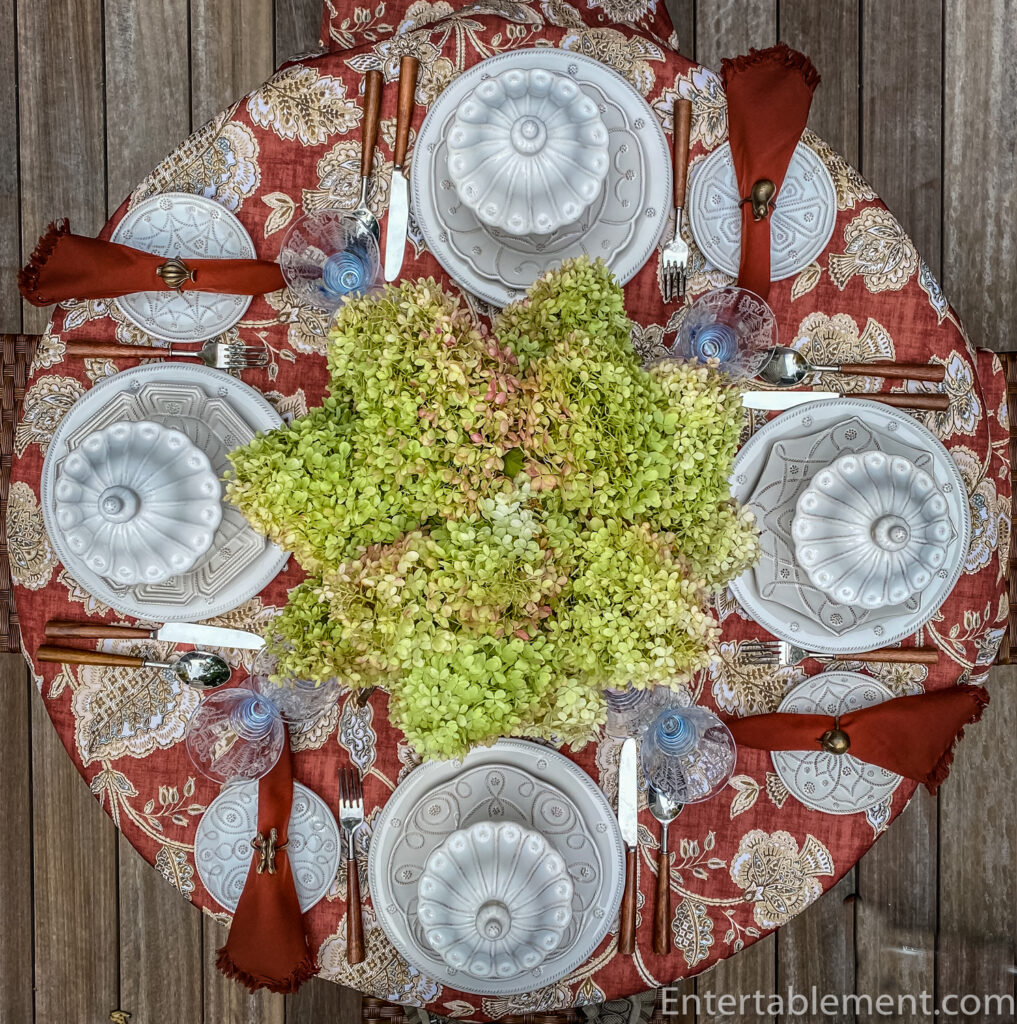 One last look at the blowsy blooms.

And that’s a wrap!

Halloween is fast approaching, and I have been baking up a few treats in anticipation. I tried my hand at caramel apples a couple of weeks ago, but they were not an unqualified success. The caramel was a tad too runny – you can see it pooling around the bottom of the apples. I think I should have taken the sugar mixture up a couple more degrees before adding the cream and butter. It is no hardship to try those again, though. I looooove caramel in all its guises: as a runny topping for ice cream, squishy stickiness around crisp apples or firm squares enrobed in dark chocolate. Yummy. 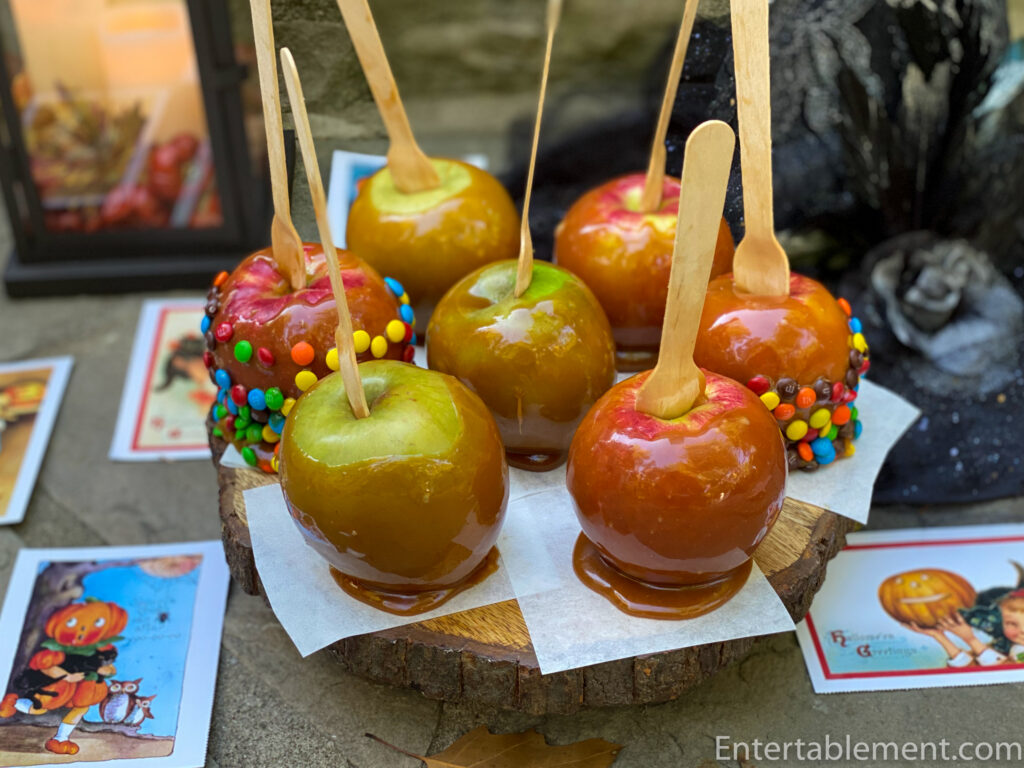 Last weekend, four of the granddaughters came for a sleepover. We made pizza dough for the first time, and each of them chose their toppings for personal pizzas, which we consumed while watching It’s the Great Pumpkin Charlie Brown. We finished up with chocolate cupcakes topped with Peanut Butter Swiss Meringue Buttercream frosting and Reese’s pieces. Now those went over well—recipe to follow. 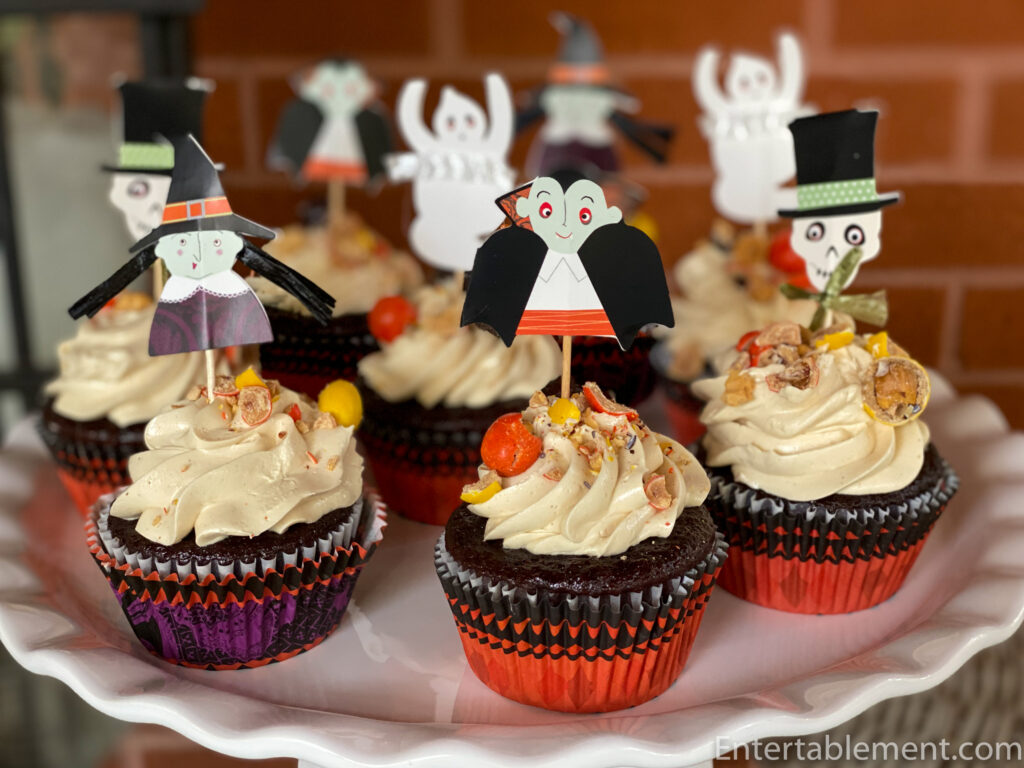 Moxie is almost herself again. It’s been a long, slow recovery; she’s still very skinny but has lost the truly frightening skeletal aspect. We are still waiting for her Snap, Crackle and Pop to reappear, though. She’s unusually gentle and cooperative. Dundee is quite puzzled. He keeps poking at her with his paw, waiting for her customary snarly response to her annoying younger brother. I never thought I’d welcome the sound of Moxie hurling verbal abuse at Dundee, but this uncharacteristic mellowness is disturbing.