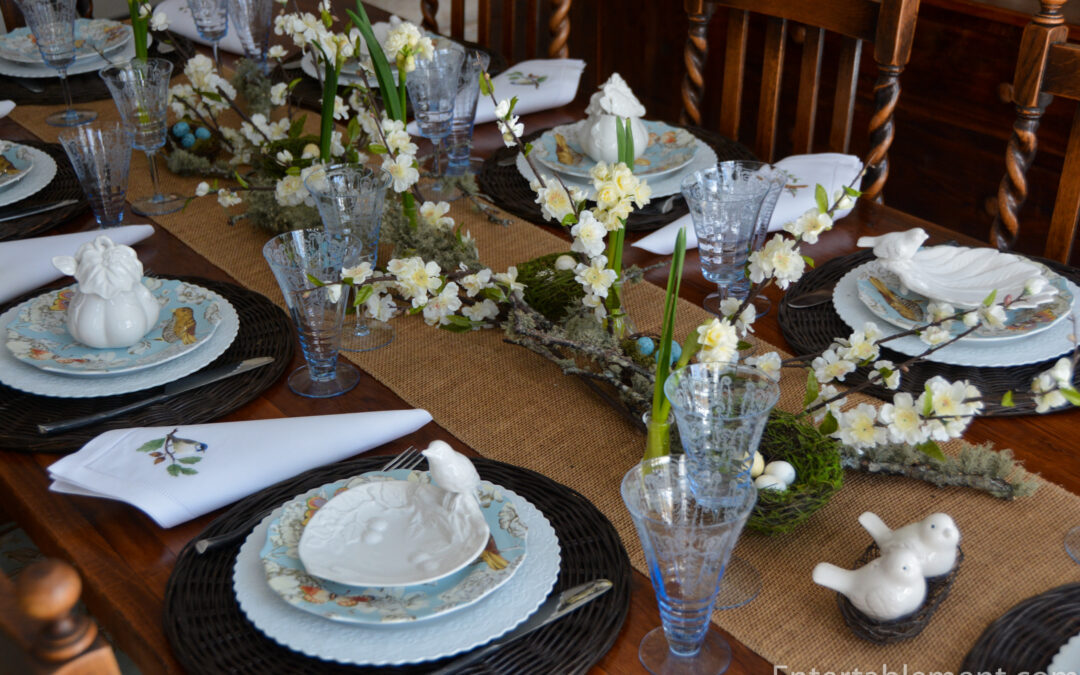 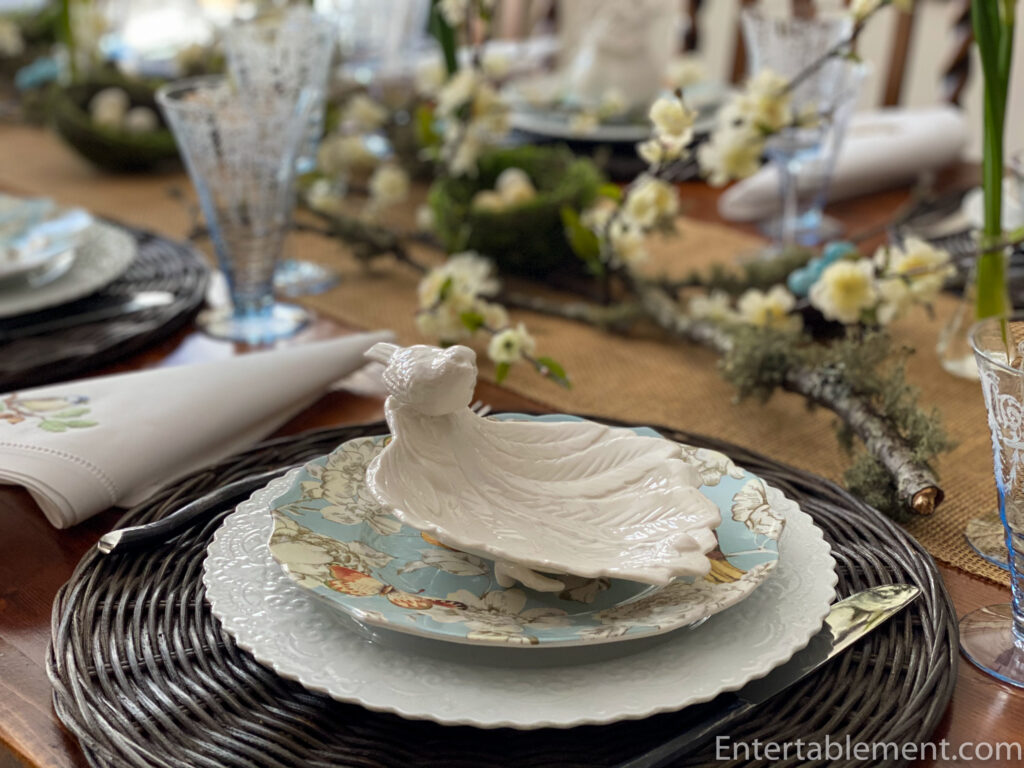 Every spring, it’s the same. She starts nagging me to redecorate as soon as the weather warms up. What’s wrong with last year’s nest? 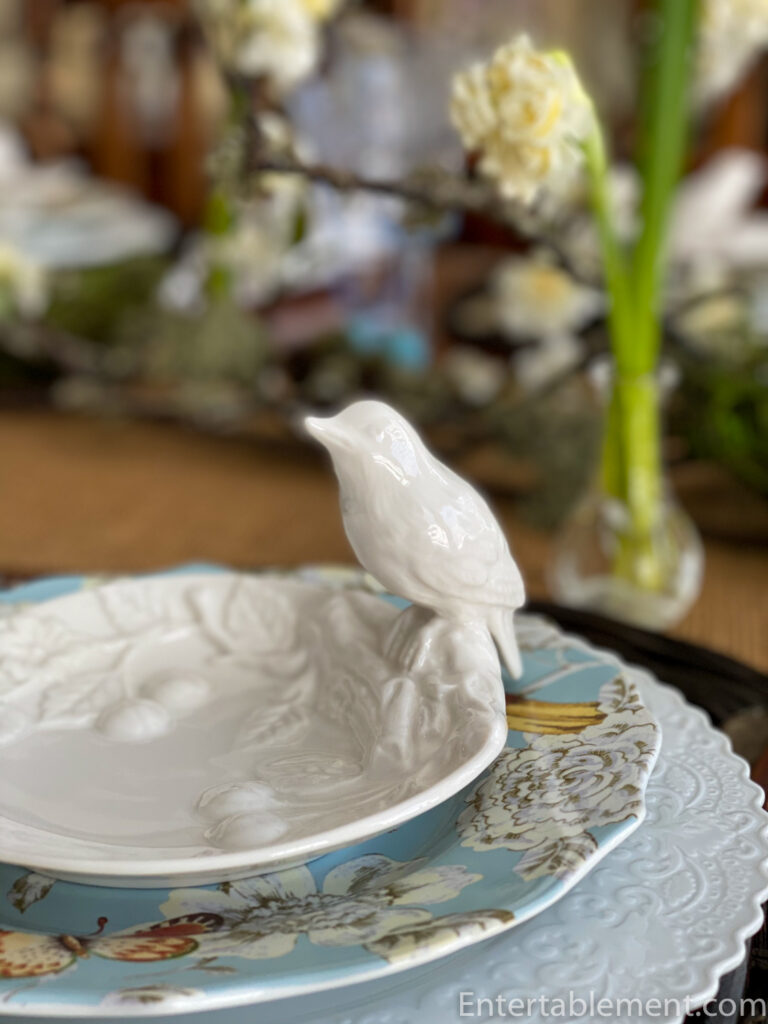 It’s so … tatty … she invariably comments. All right, already. Let’s start hunting for sprucin’ up stuff. 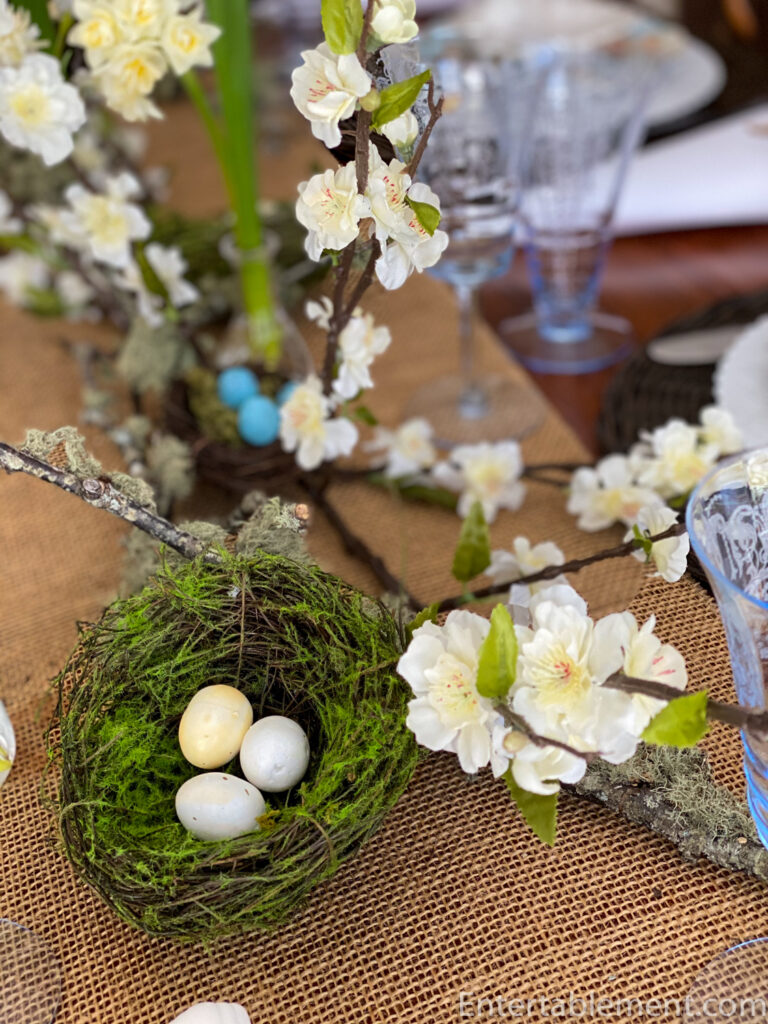 How about some of this moss? And these flowers. And LOOK! Eggs! That was fast. Better get moving. There will be little chirpers before we have time to turn around. And they take a LOT of feeding. I’m exhausted just thinking about it. 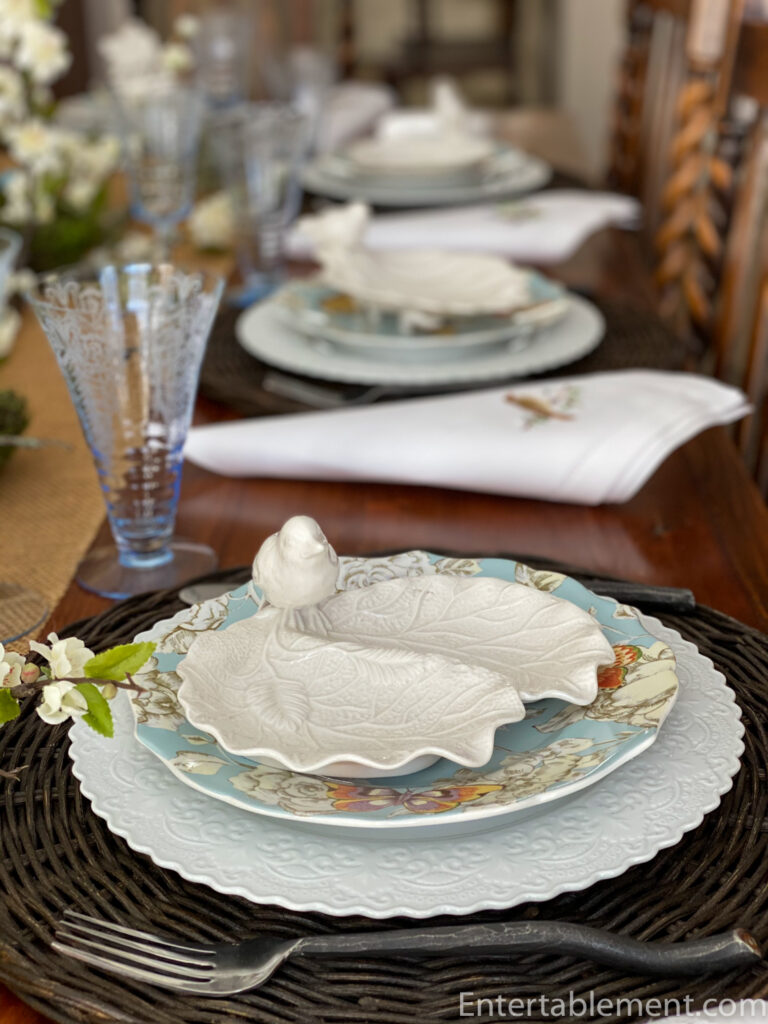 Some birds had to look after double-nests. Glad that’s not us. 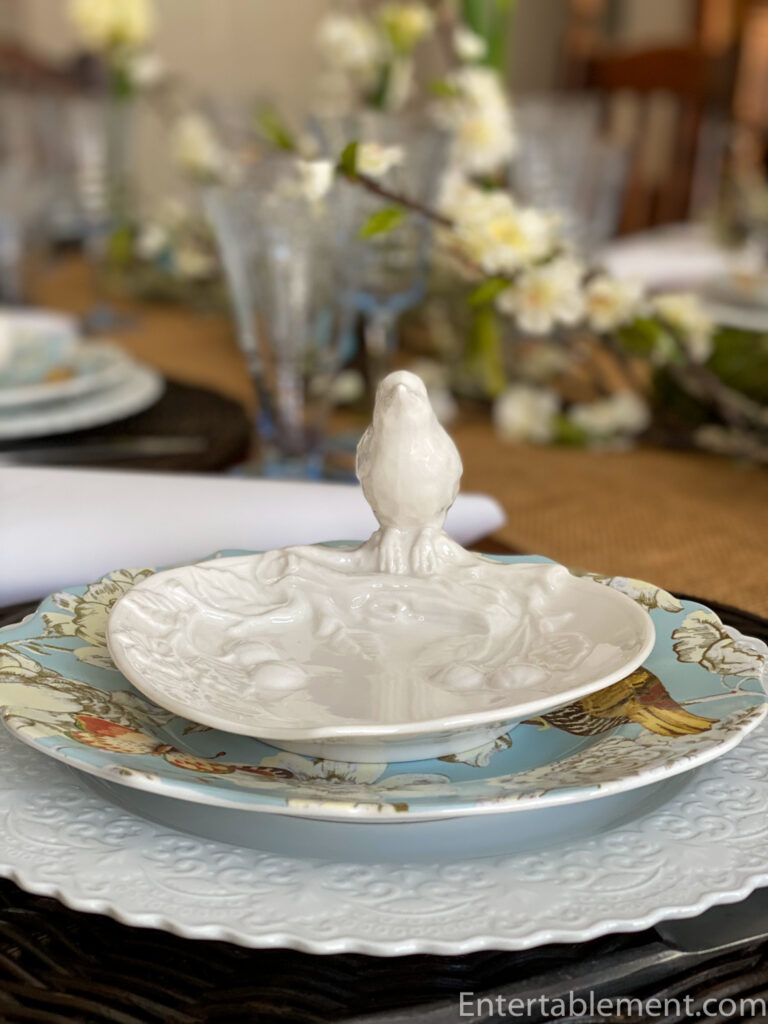 What kind of nest do you have? 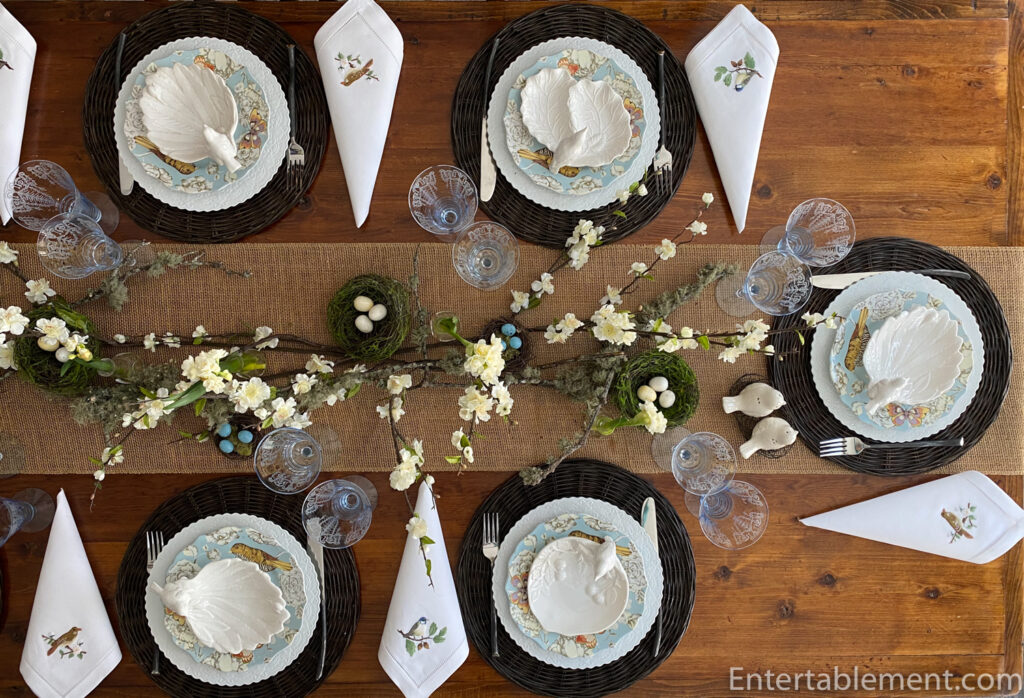 I’m a multi-nester, little bird. I like to have lots of you guys around, on plates, napkins and little white dishes (Gracie China, discontinued, but sometimes on eBay). 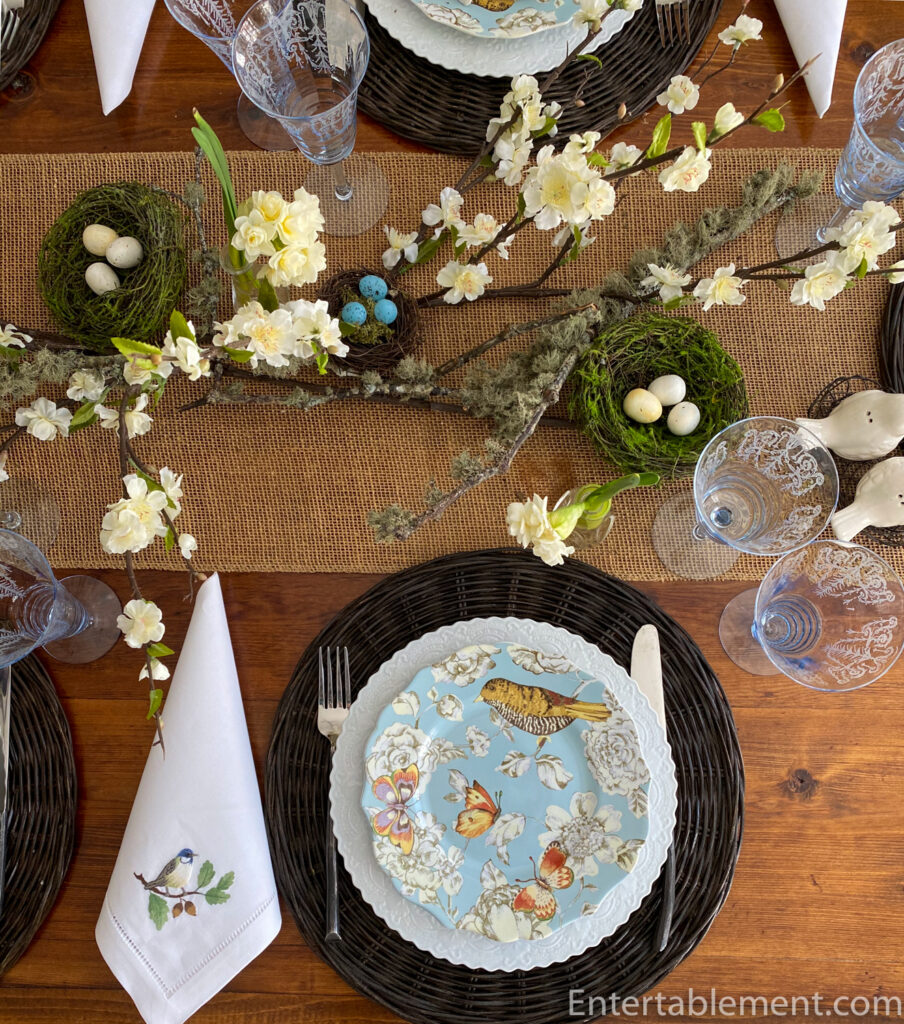 We have colourful Elenore birds on plates from Pier 1 (discontinued, eBay) and embroidered birds on napkins from Overstock. 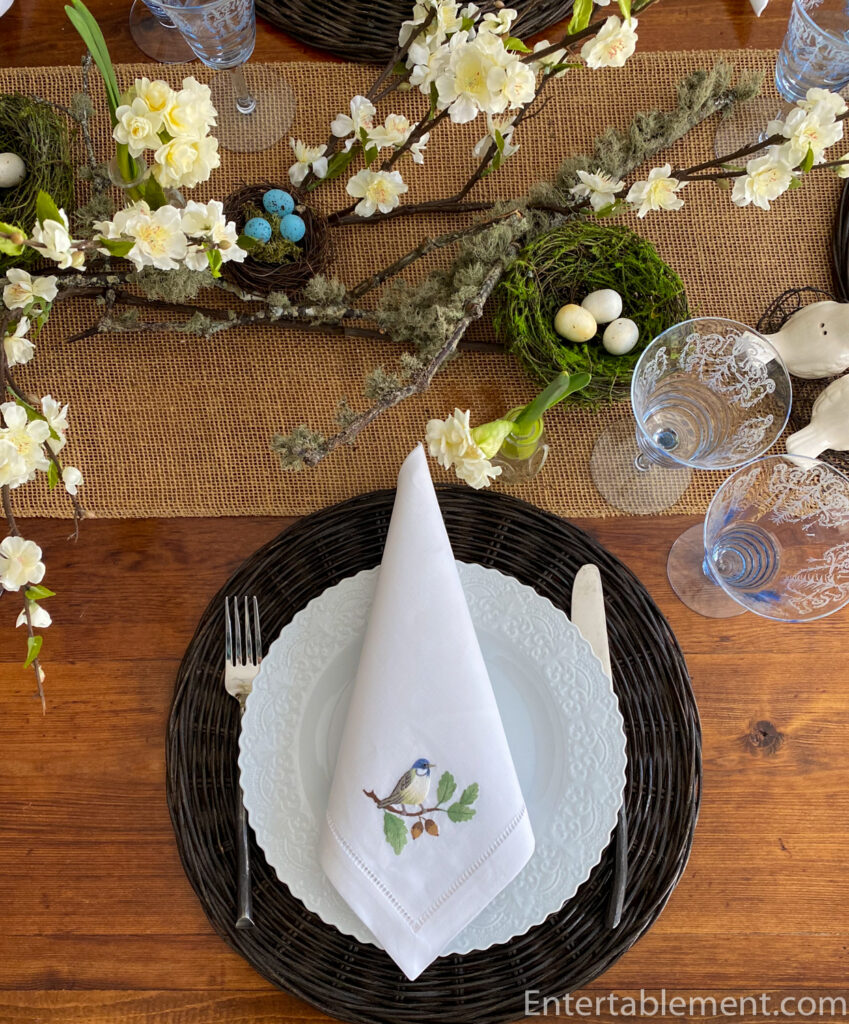 Elenore is sitting on top of a Sophia plate from Ralph Lauren (discontinued; eBay). 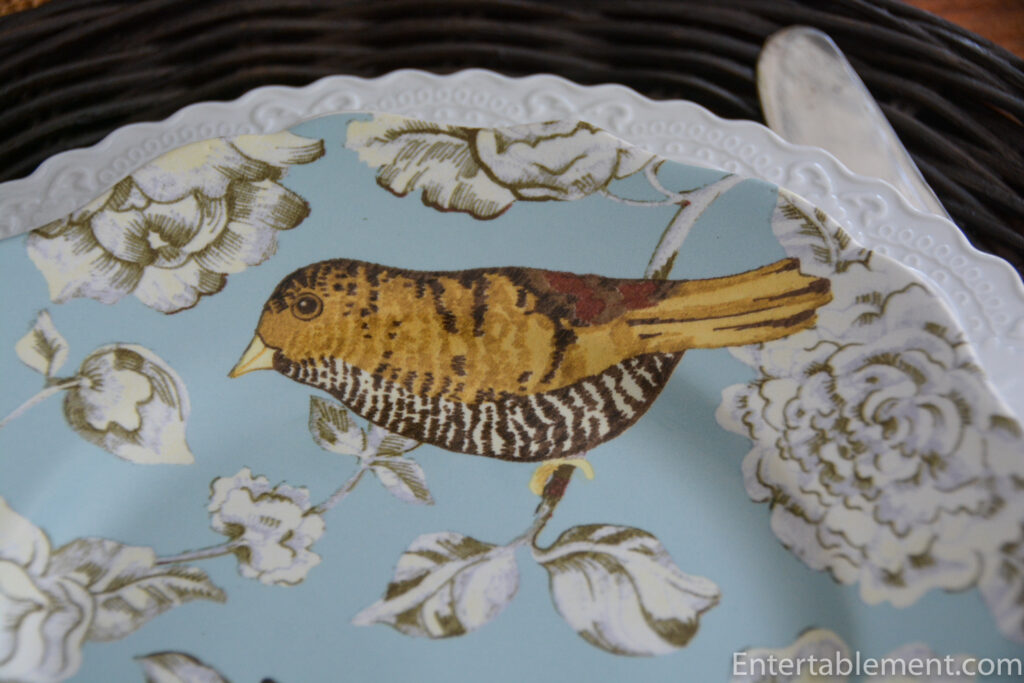 She’s a goldy-brown bird, and I’m not sure what species she might be. 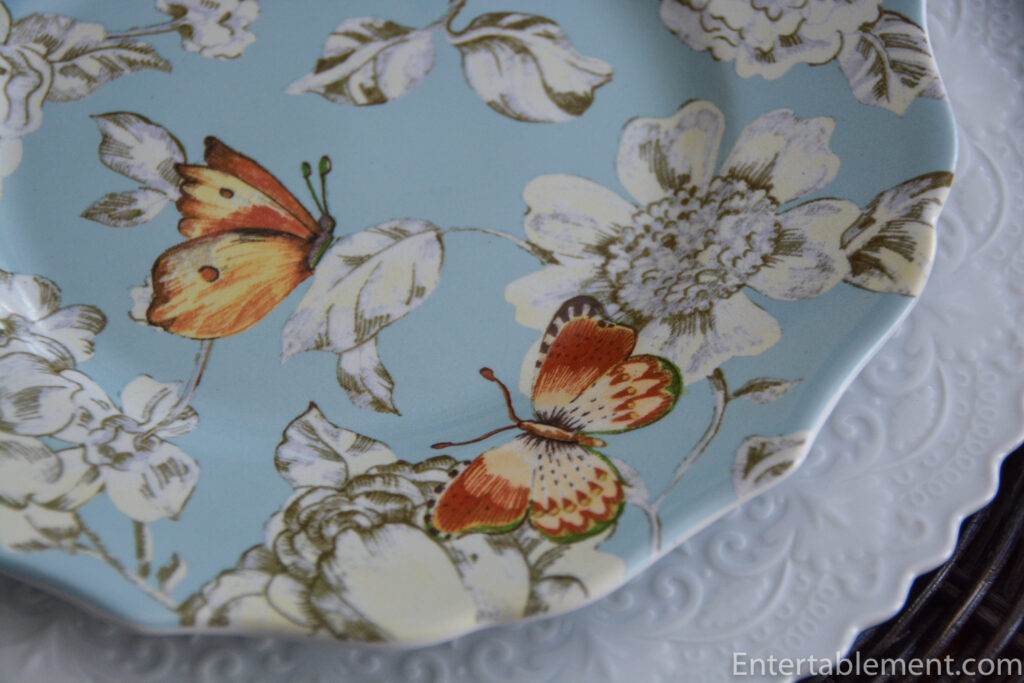 She hangs around with a few butterflies. 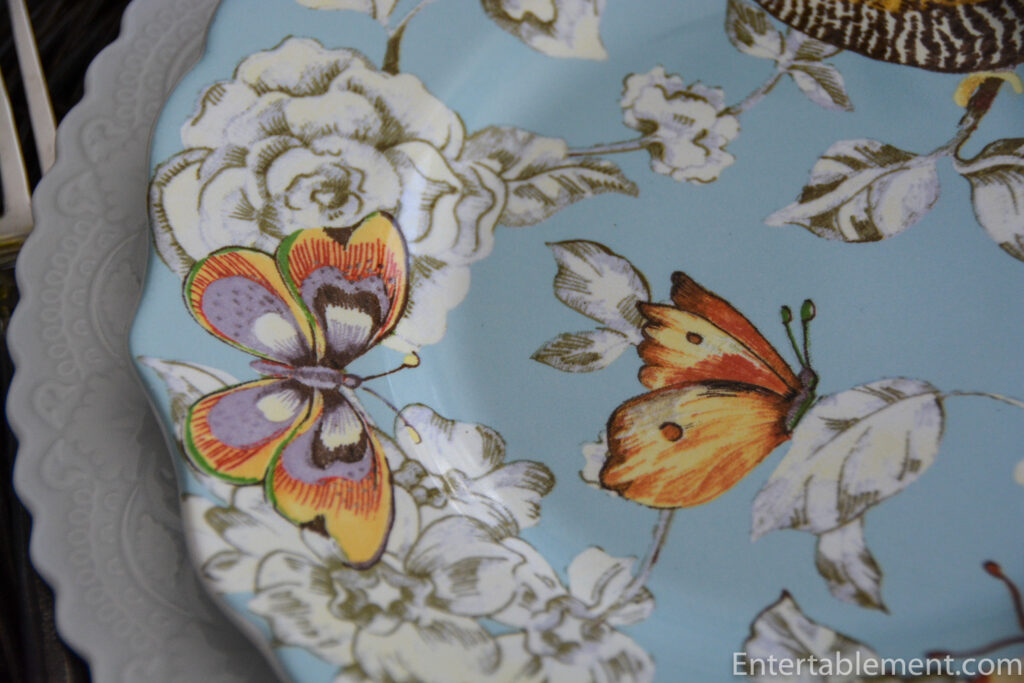 I do like it when all of you come flocking in to join us at the table. 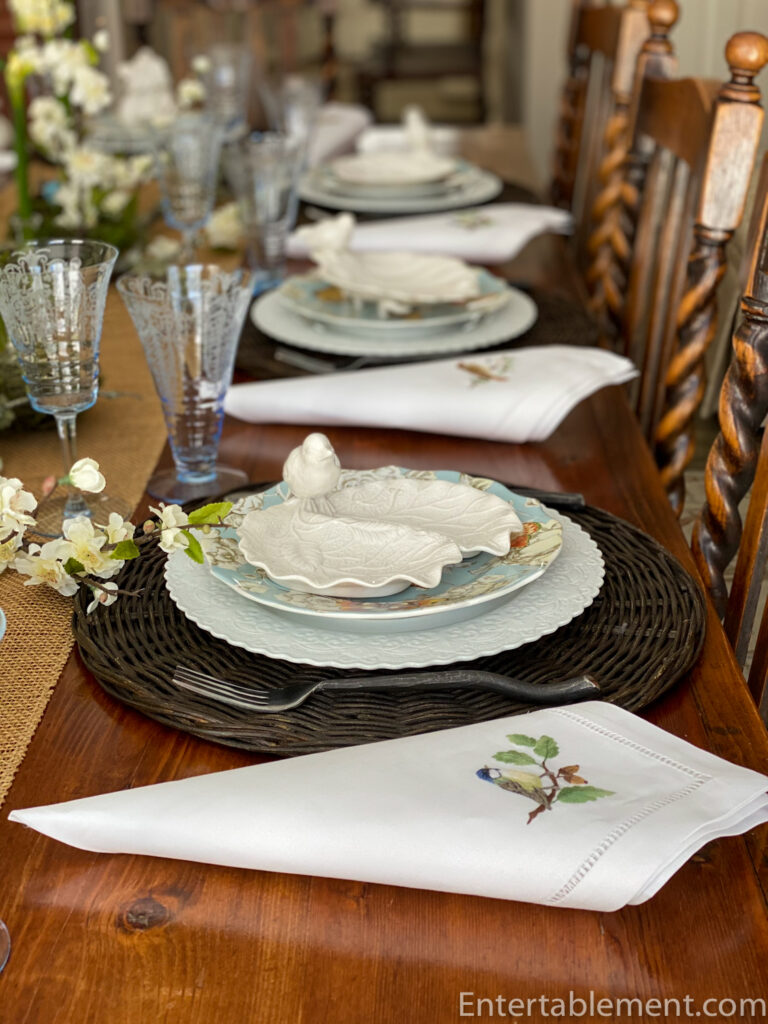 It makes me want to raise a glass and toast the sunny spring. (Cleo Blue, Cambridge). 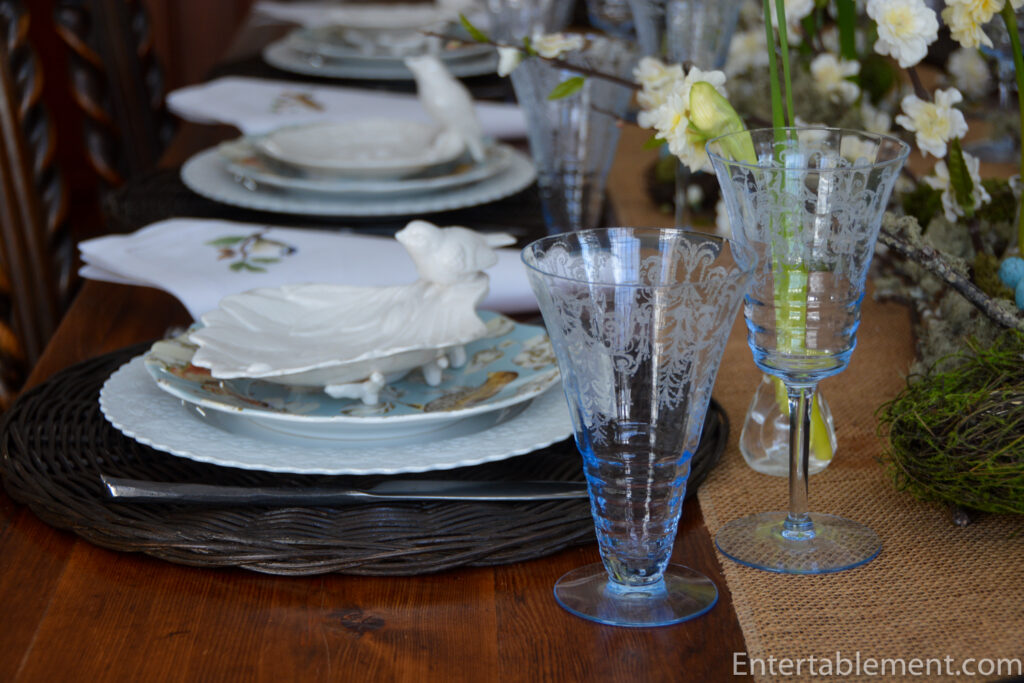 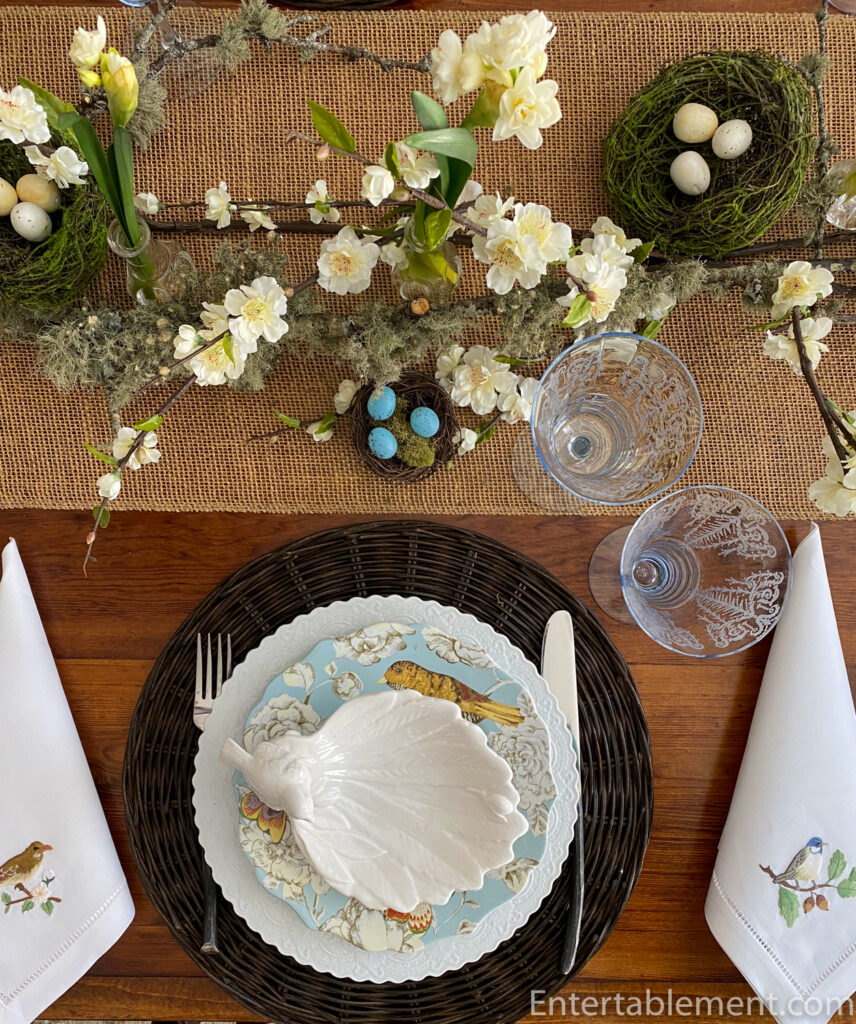 Some of you have enquired about the progress of a certain orange cat. Dundee, you will be happy to know, is thriving like a green bay tree. Regrettably, his girth keeps pace; he’s beginning to look like a feline version of Henry VIII, without gout. With the spring weather, he’s getting quite demanding about going outside, but so far, we’ve managed to fend off his advances. Moxie twitching her tail at him as she scoots out the door does not help. You can almost hear her saying, “Nyah, nyah, I’m going out, and you’re not!!”. 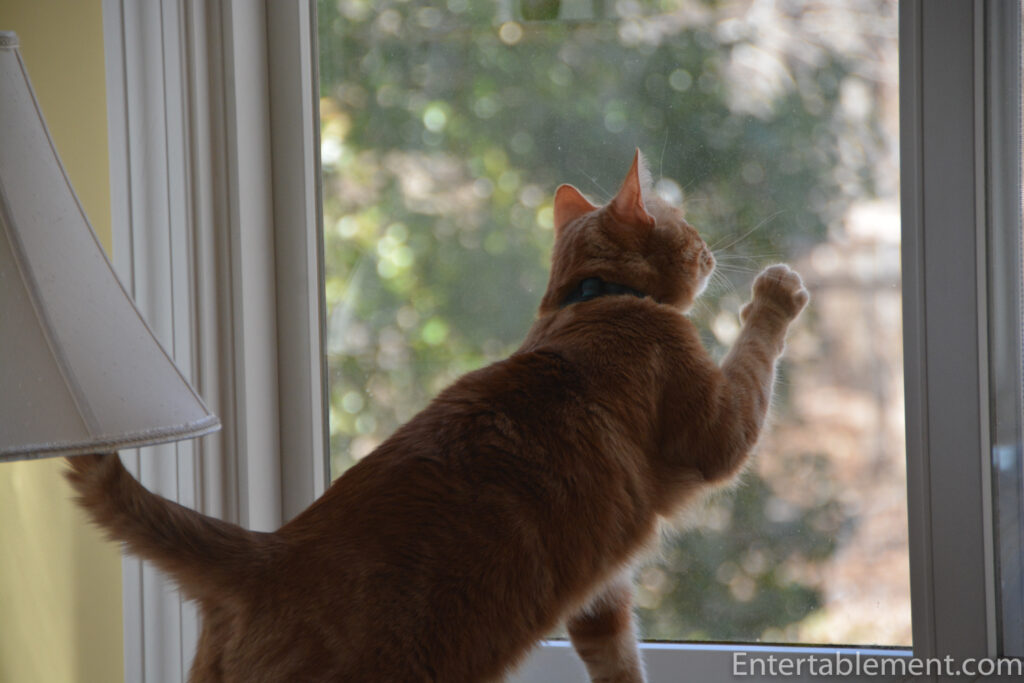 He was kept amused yesterday “helping” me set up a tea in the sunroom. Whatcha doin’, Mum? Is that for me? 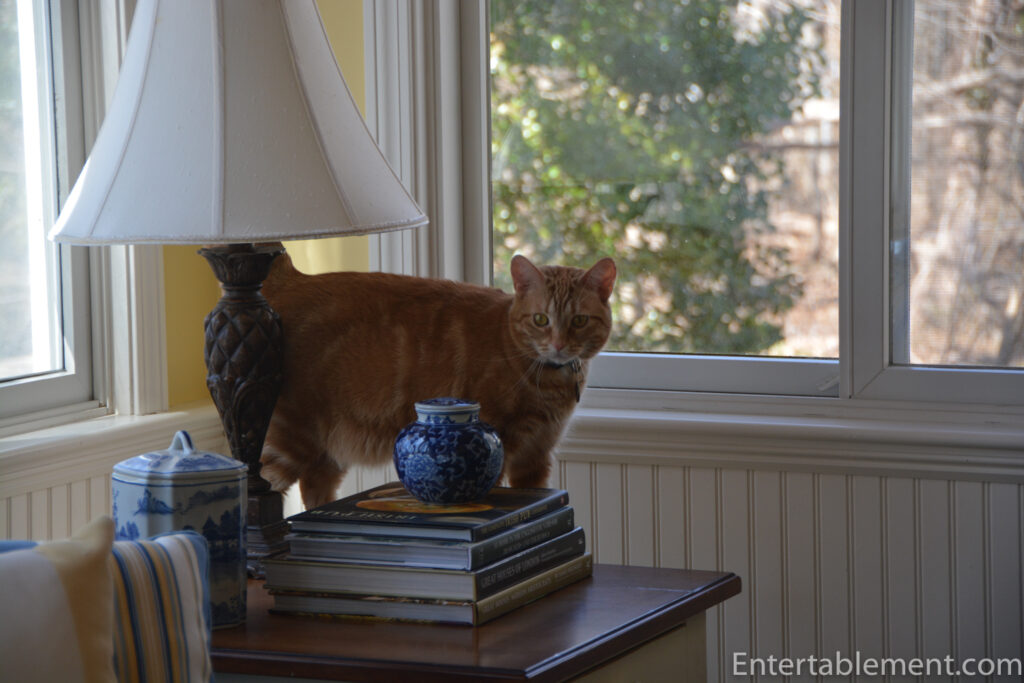 It must be for me. She wouldn’t set out all that food and not share, would she? 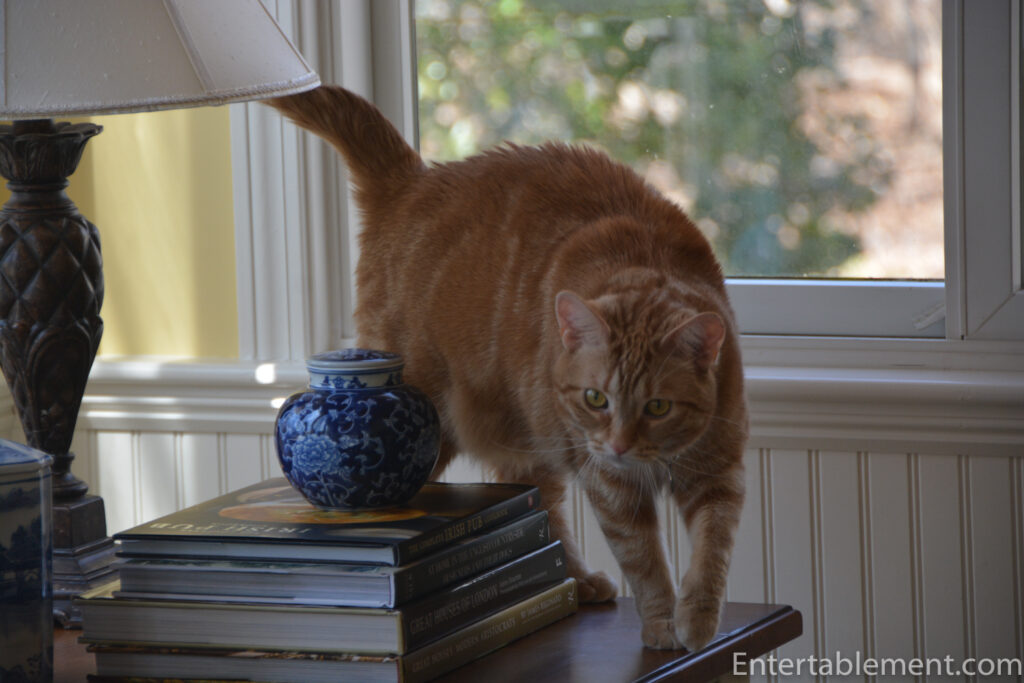 Oh my. That looks delicious. Now, if I can just hook my little paw inside that smoked salmon… 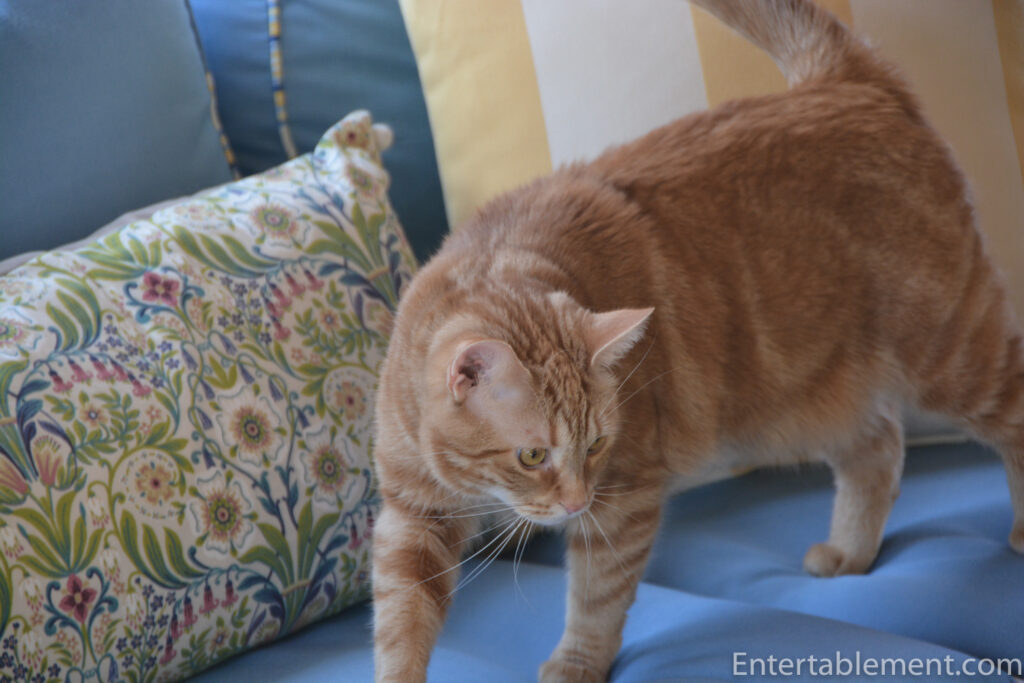 Hmmm. She seems very busy setting things up; oh good; she’s taking pictures now; I’ll just stay over here on this chair and pretend I’m going to sleep. She’ll be distracted at some point, and then … some of that salmon can be liberated.  Just be patient… 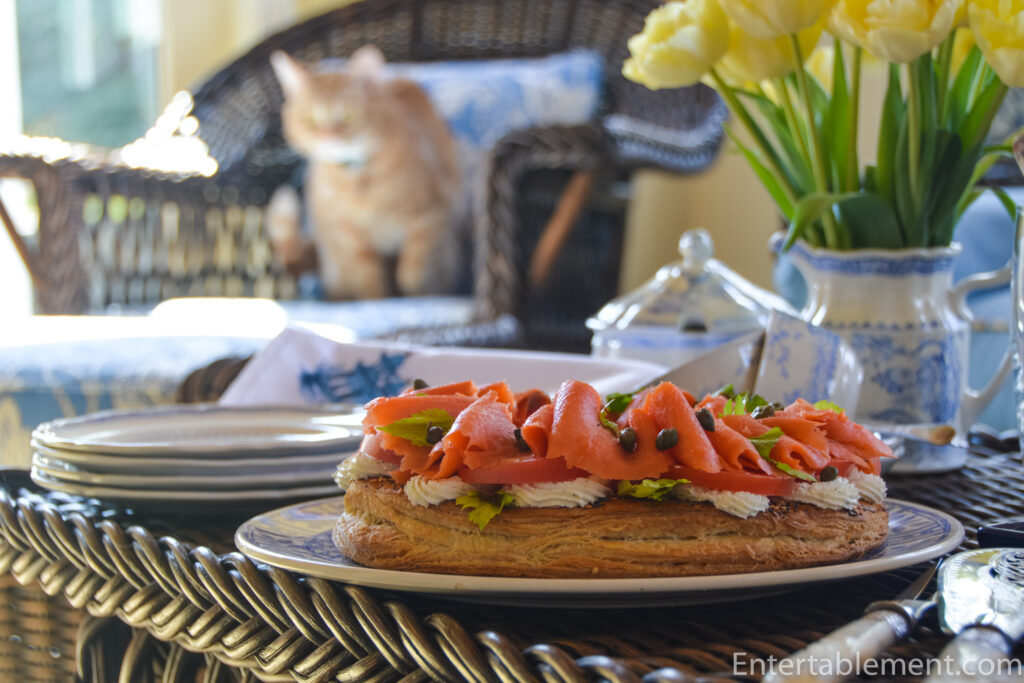 That salmon ring on puff pastry is one of the recipes for Book #2, as yet untitled. I’m waiting for Glenn to do his magic again. He named the site, Entertablement and suggested The Four Seasons for Book #1. I’m almost finished with the cooking and have about 90% of the food and tables snapped, sorted and processed. We’ve been busy here at Entertablement!

The theme of Book #2 revolves around how our approach to food has changed since the mid-1700s when the Industrial Revolution began in Britain and the coincident emergence of the Domestic Diva. We may think she’s modern, but it turns out she’s been around in various guises since people began to migrate from farm to town. The settlers brought her to North America in their baggage, and homegrown American versions soon appeared. It’s fascinating to see what has carried forward and what has changed in menus, preparation methods, and social mores. I’m having a marvellous time with the research, especially around the Domestic Divas – the stories and personalities are truly enthralling. At some point, I’m going to have to stop delving and finish writing, but for now, I’m immersed. Between testing recipes, setting tables, combing the internet and old-fashioned paper books, I’m as busy as those little birds building their nests.

Have a great week, all. Chirp, chirp!