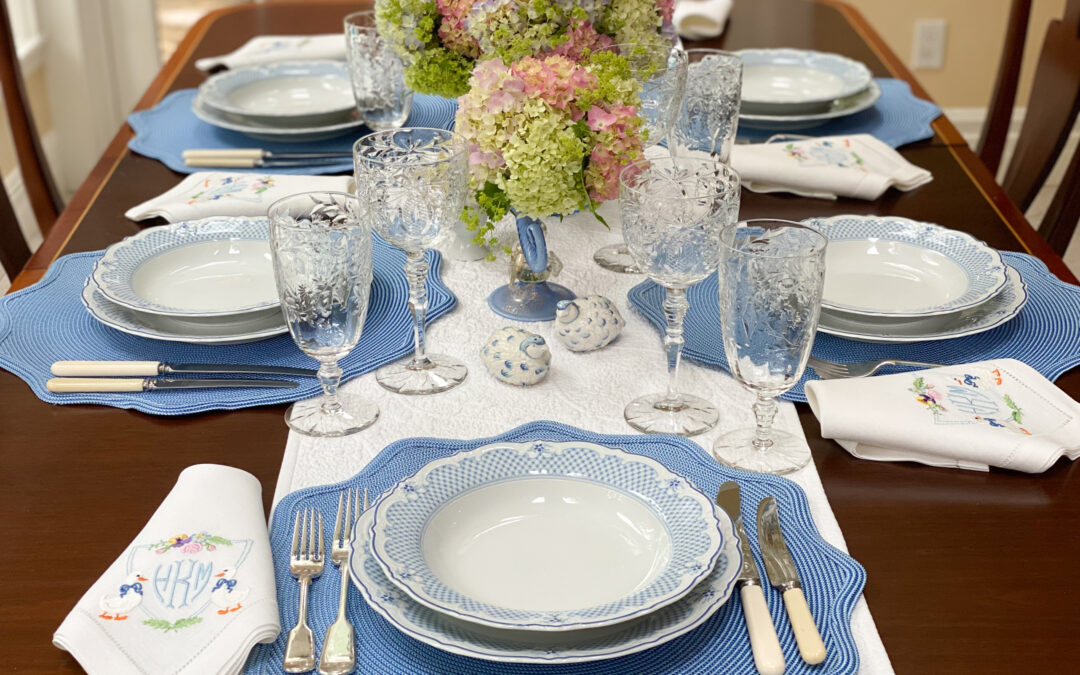 We are just on the cusp of summer when cool blue and white reign supreme. 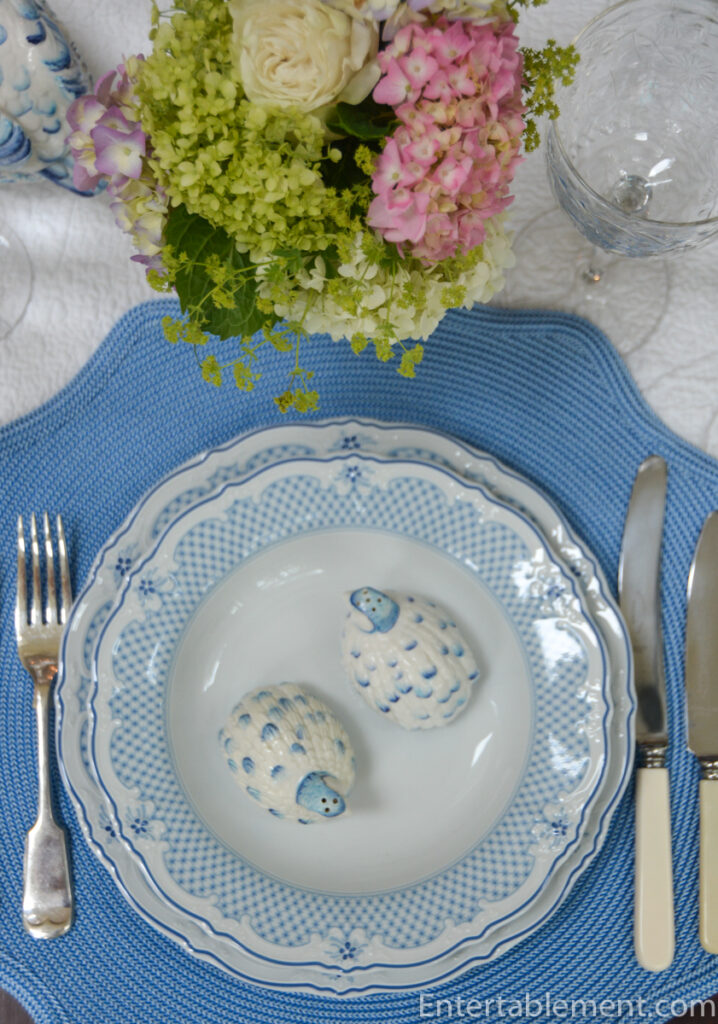 By Hutschenreuther (I always have to look up the spelling of that one), Estelle is among my favourite patterns. During our early days vacationing in Cape Cod in the late 1990s, the Tabletop Shop in Lemontree Village (now defunct) had some of it on display. I was smitten but had not yet embarked on the china collection path, hard as that is to imagine today. Besides, the van was already packed to the max with four kids in tow. And I do mean to the max. Glenn is a master of packing and has the patience of Job when it comes to getting everything in. But there are limits… 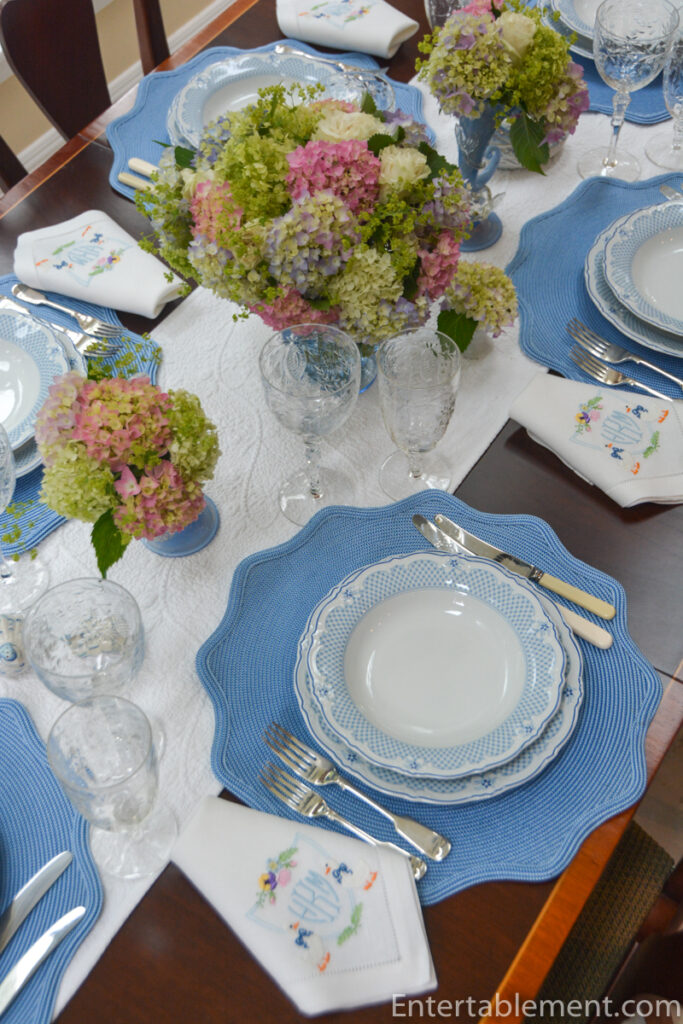 The same shop sold the book At Home with Carolyne Roehm. Intrigued, I purchased a copy and spent the next few days devouring it as my beachside reading. 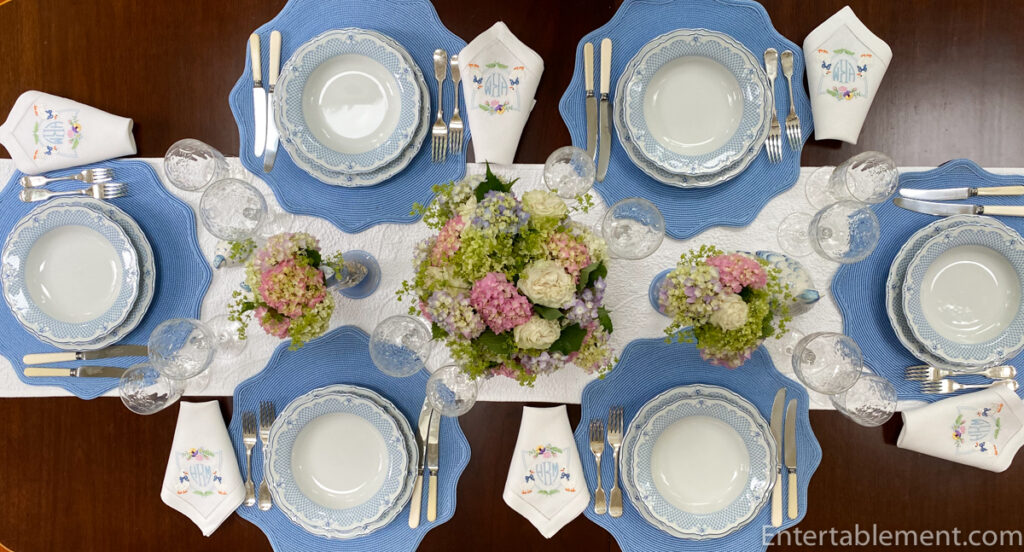 Estelle was still there when we returned the following year. The china bug had bitten by then, and I was dipping a toe into the water. I started with six place settings, including the soup plates. 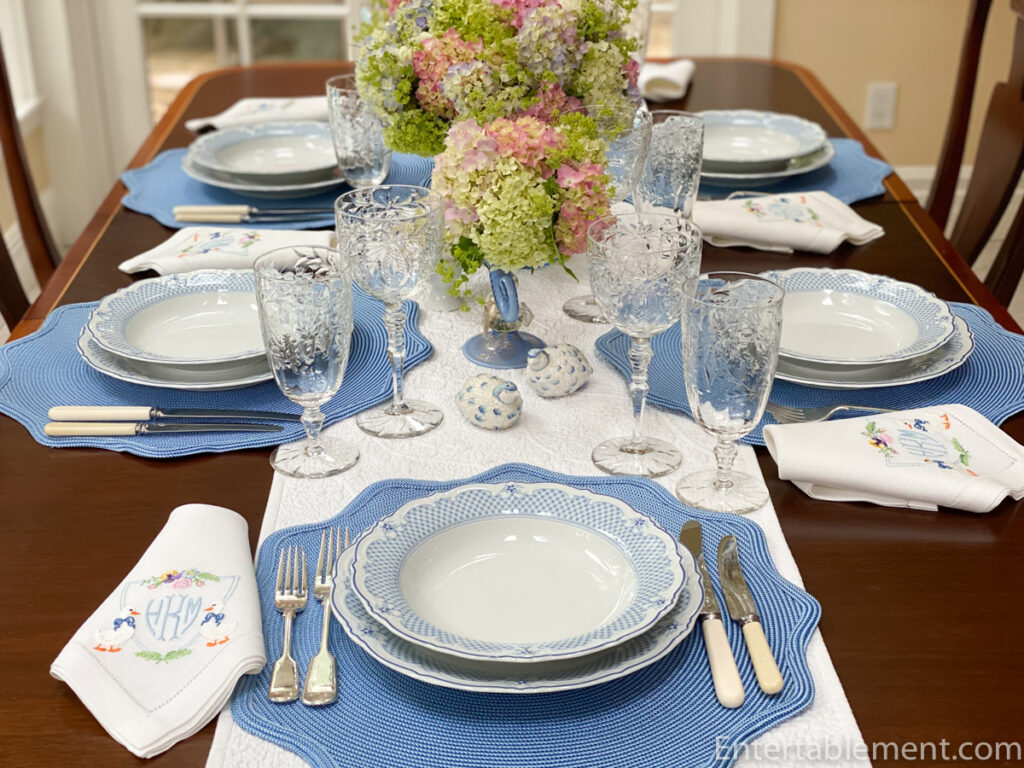 Over the years, I’ve added to the pattern; it has the most gorgeously shaped pieces, including the fruit bowls,  teapot, cream & sugar, and egg cups. 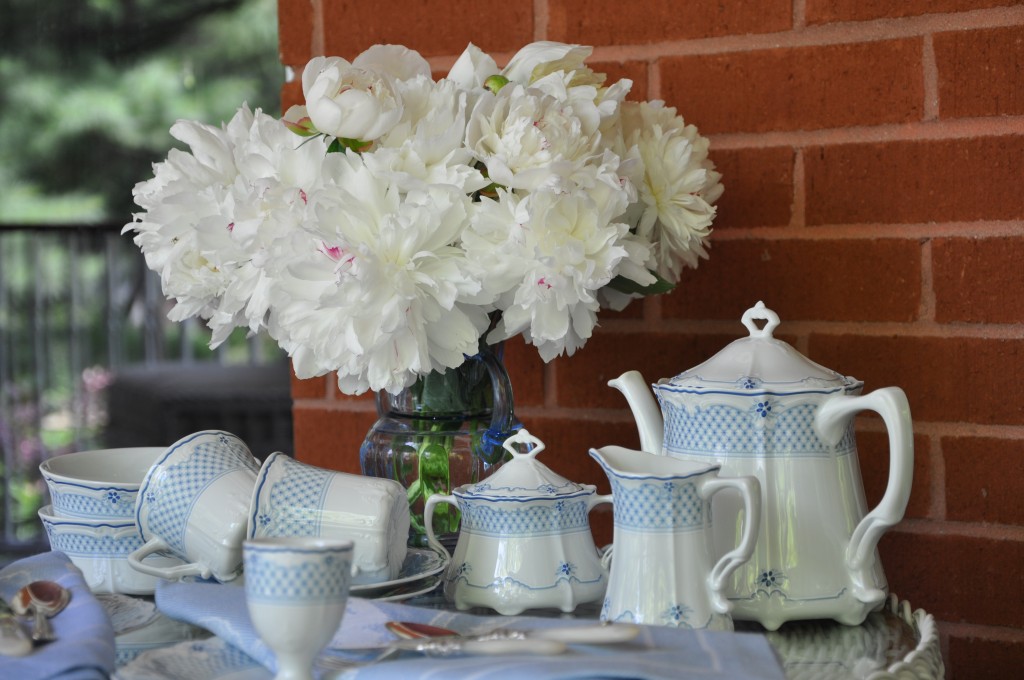 The quail shaped salt & pepper and the candy dish came from the Tabletop Shop. I picked them up on the first foray into Estelle. 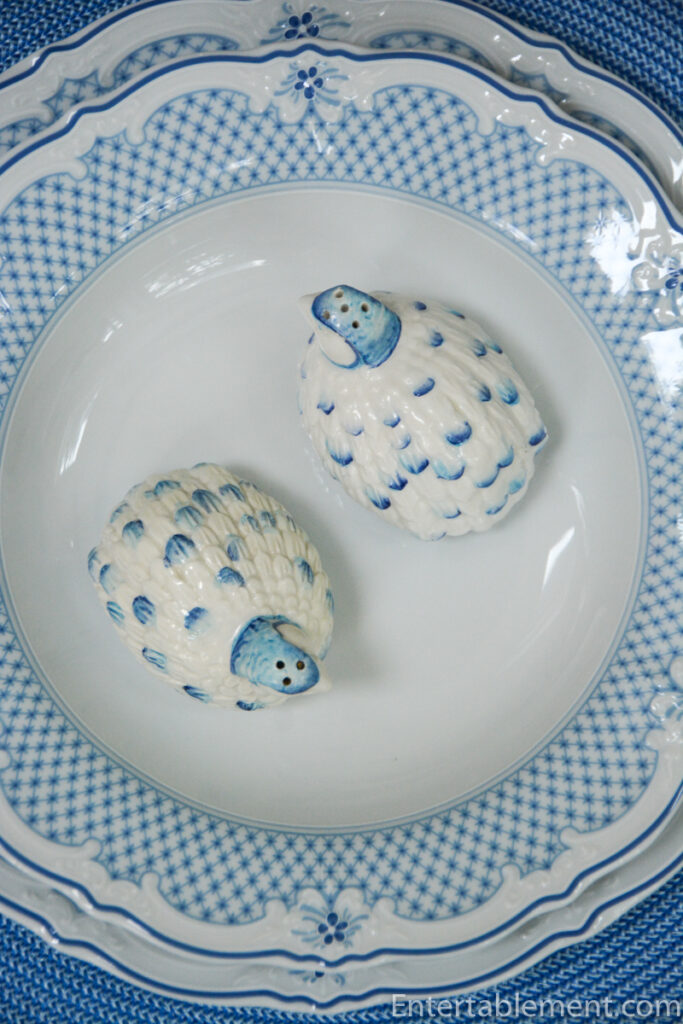 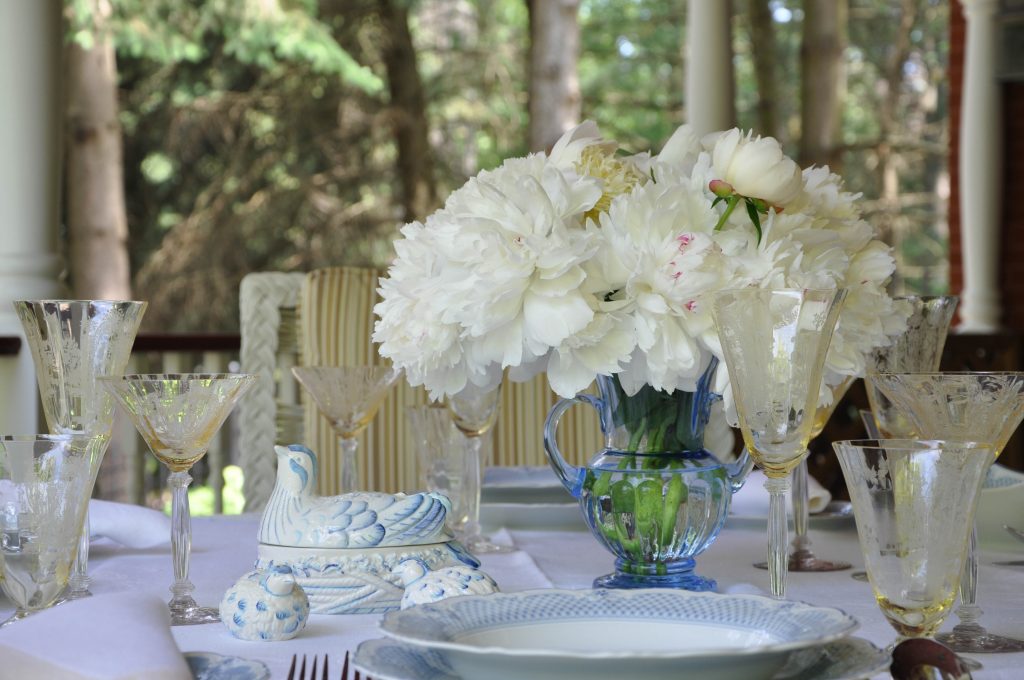 The whimsical duck napkins are a recent addition from an Etsy shop. 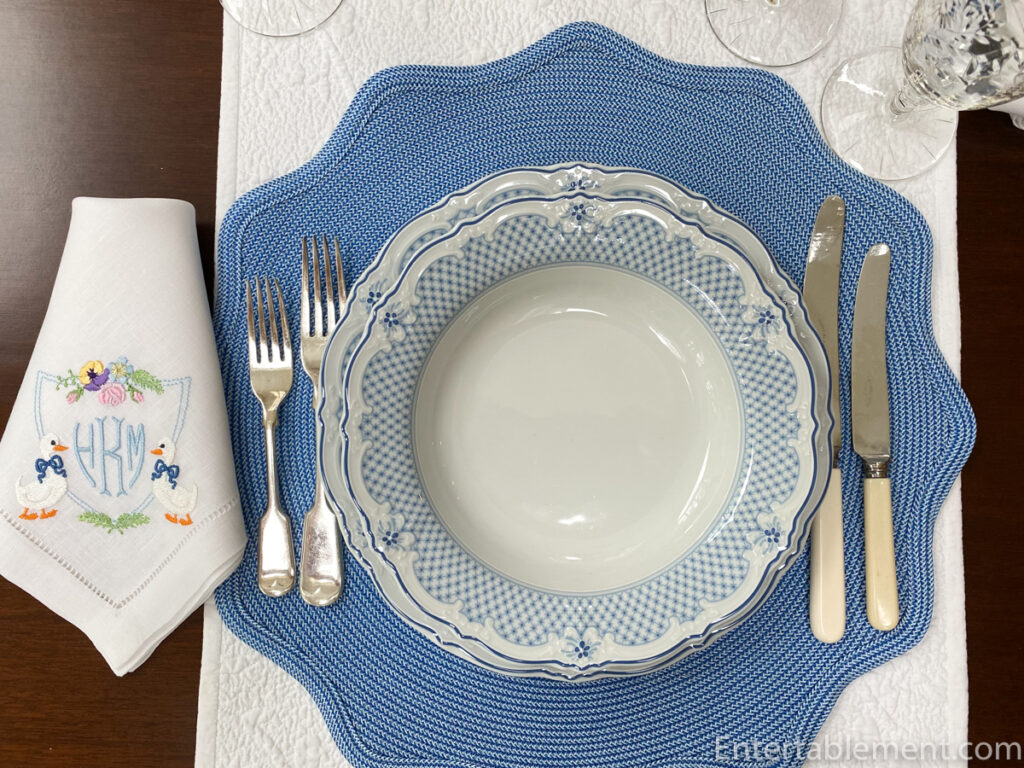 You may already have guessed that they were an enormous hit with my duck-loving granddaughter, Juliana. 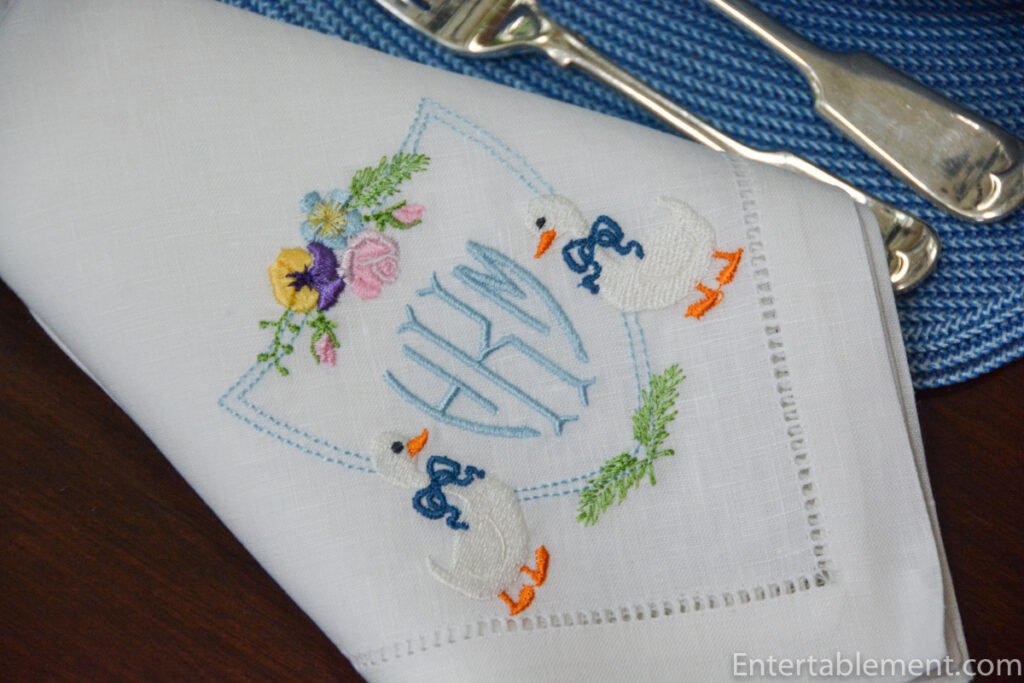 The wine and water goblets are my often-used antique wheel-cut pattern from an unknown manufacturer. They are from Elise Abrams Antiques. 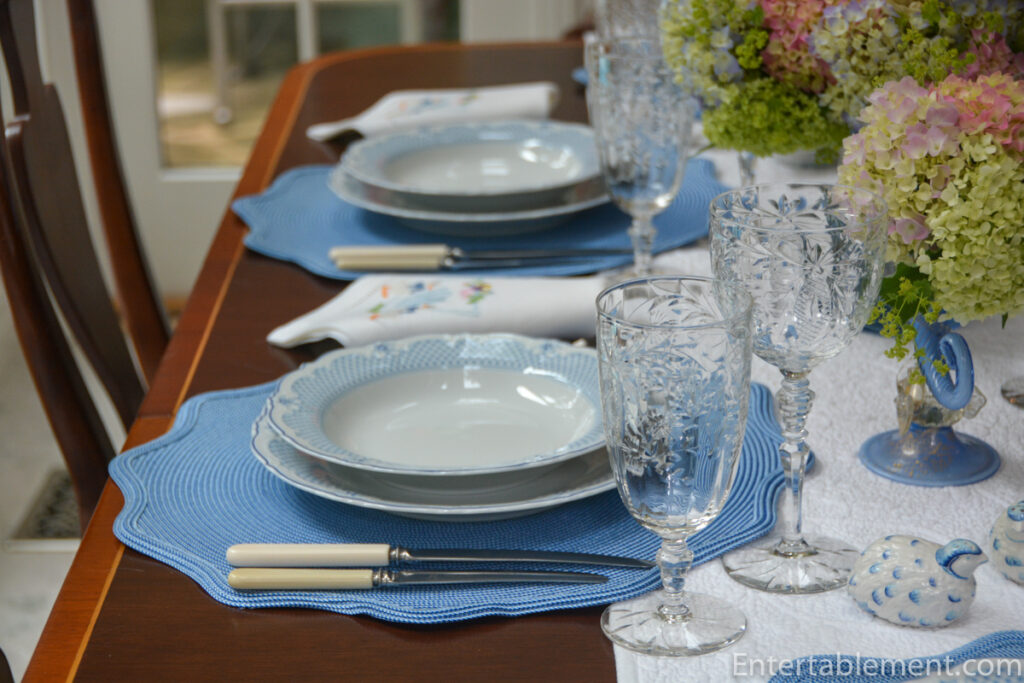 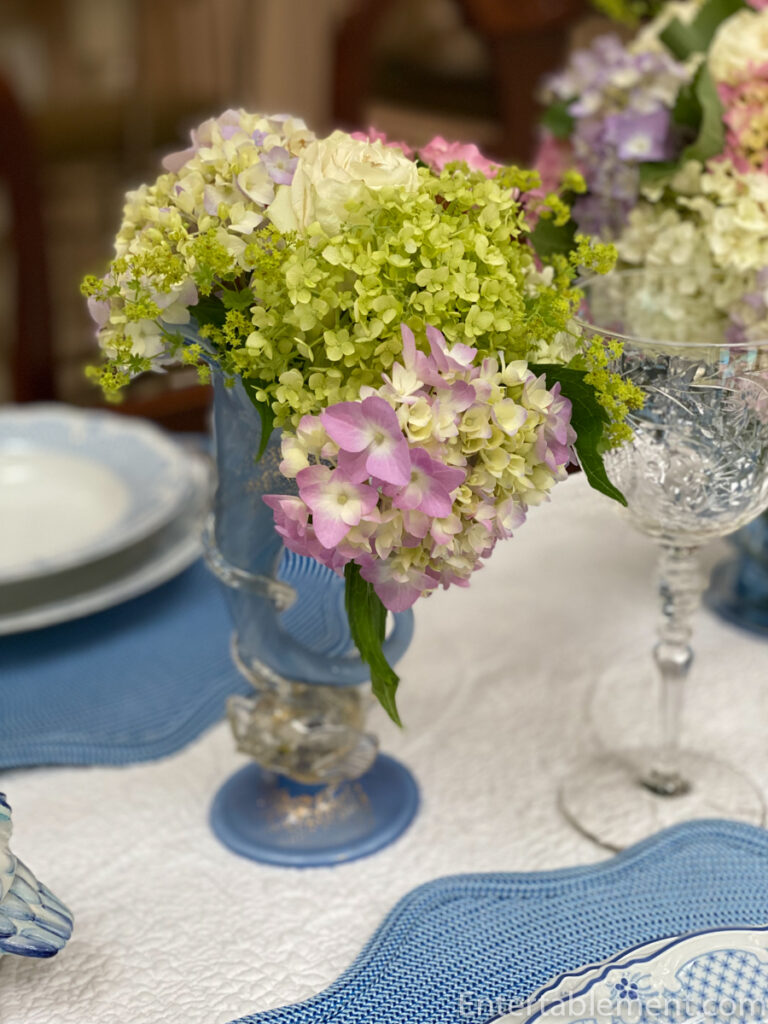 Endless Summer Hydrangea in a soft pastel mix of blue and pink made charming, softly coloured arrangements for the table. 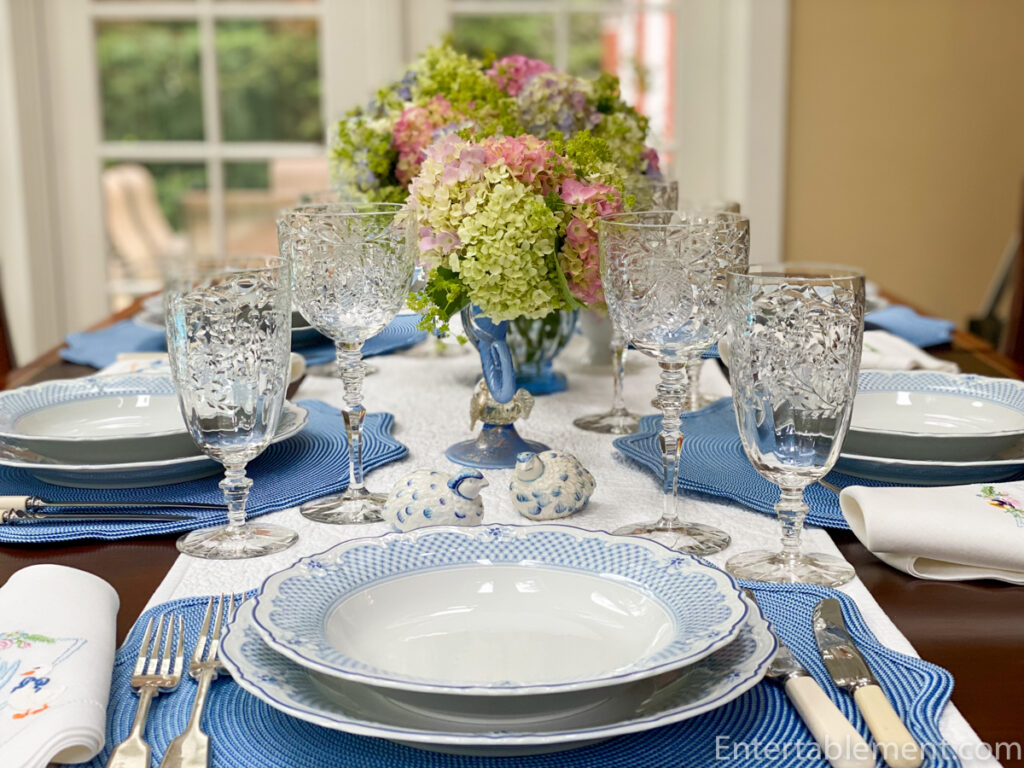 It never ceases to amaze me how many differently tinted flowers can appear on one plant. 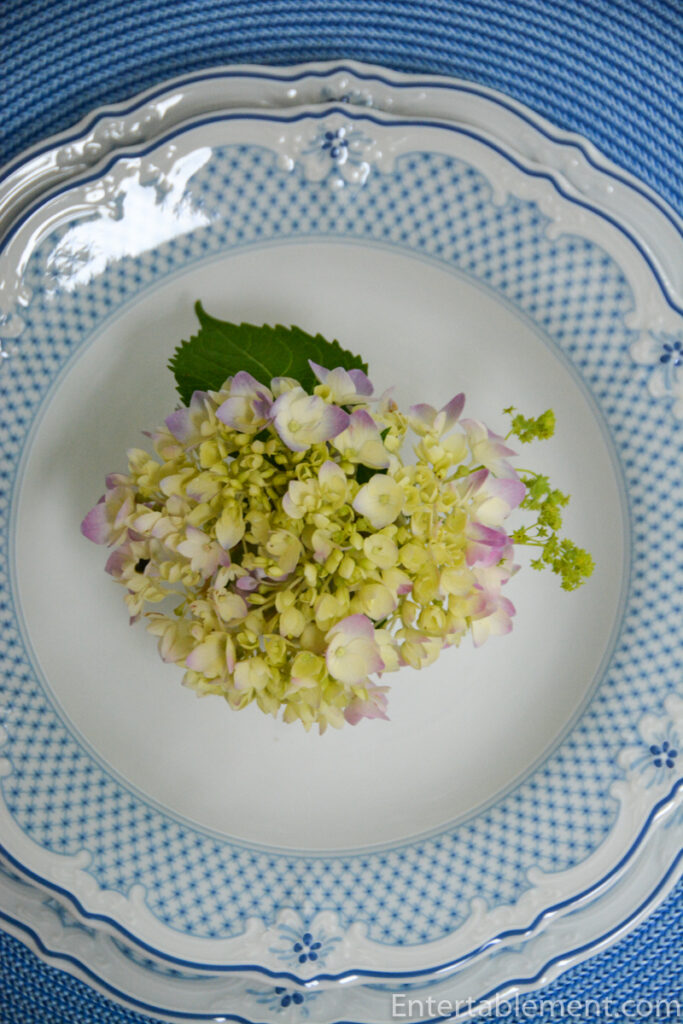 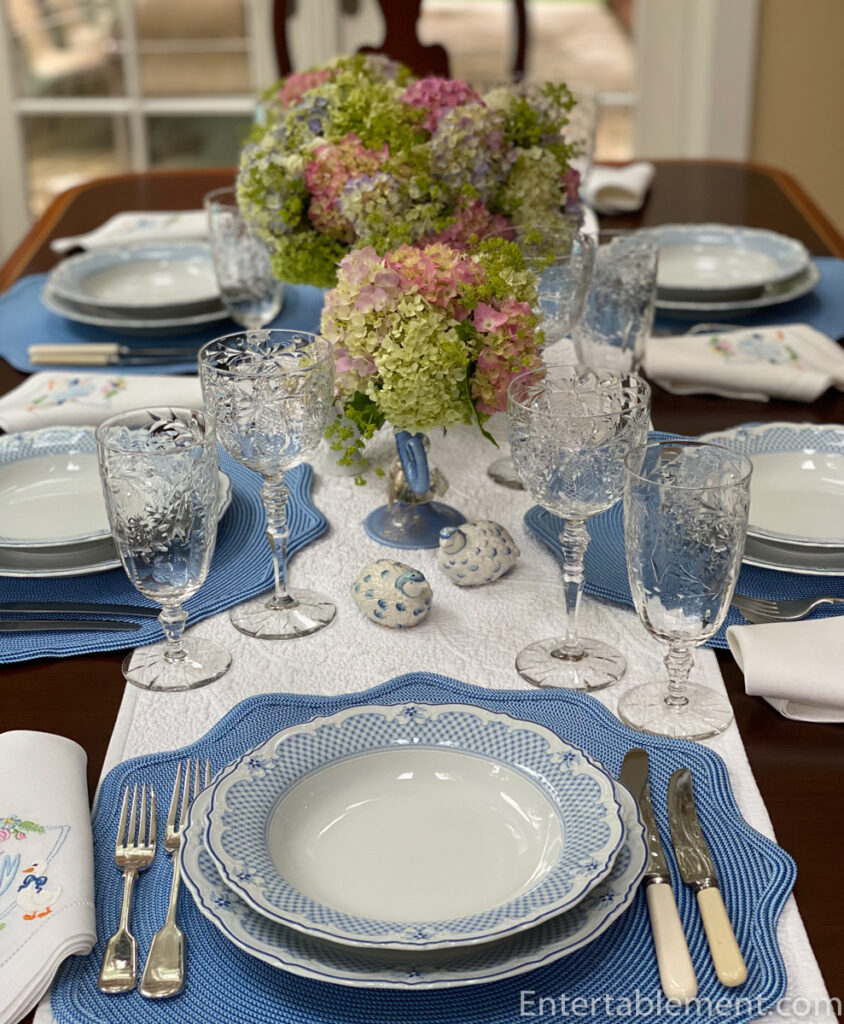 I hope everyone is having a relaxed Sunday. We are planning a low tide walk in a little while, but unfortunately, it will be without the pups. Marigold got a little too enthusiastic and is currently grounded after a trip to the vet for cleanup and some preventative antibiotics. It’s all healing nicely, and we are pretty confident it won’t leave a scar. 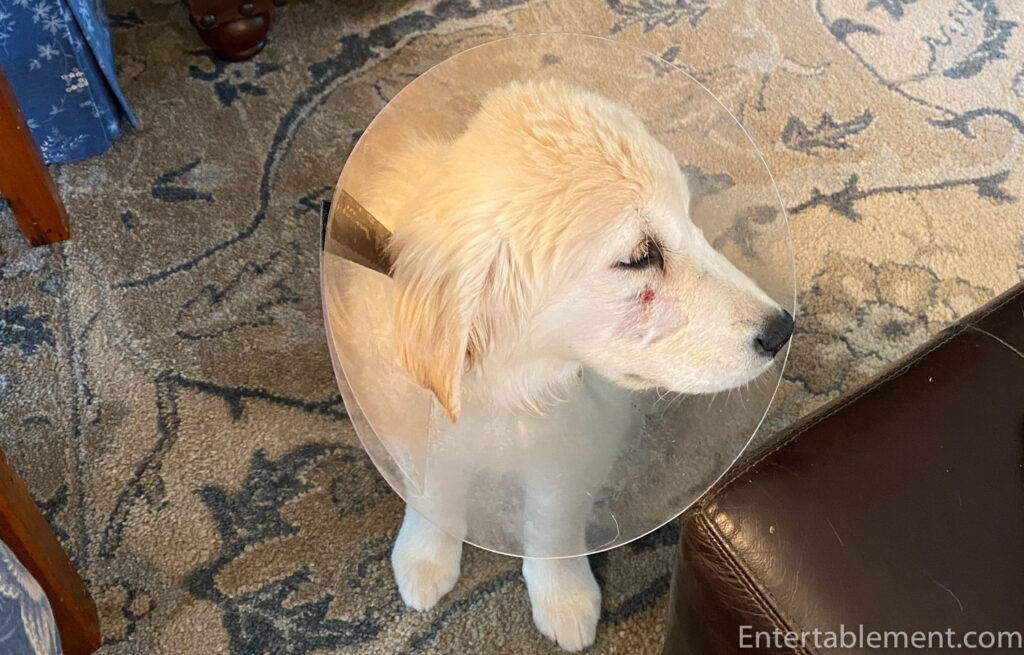 As the saying goes, “it’s all fun and games until someone ends up in a cone”. 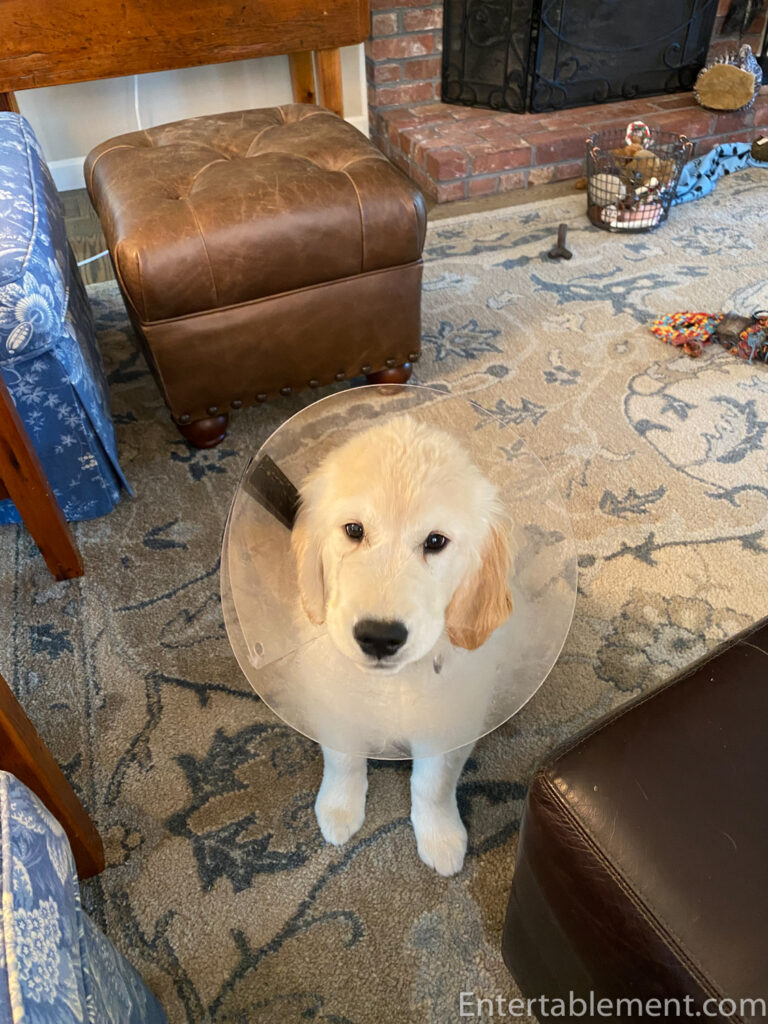 She was a bit subdued when first fitted with The Cone of Shame. That lasted about three nanoseconds; she’s now using it confidently to bash her brothers or snowplough her way through any obstacle. A couple more days, and she’ll be back romping on the beach.