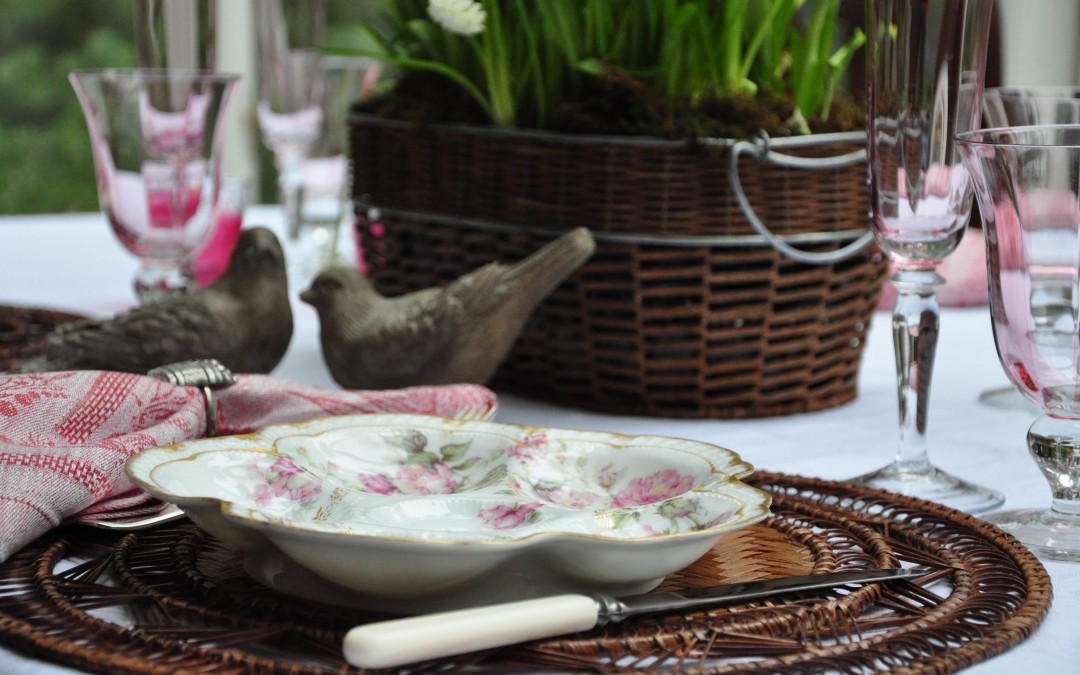 One of the (many) wonderful things about Cape Cod is our ready access to great seafood. Famed for its Wellfleet oysters, the Cape also boasts many local varieties. We love both Dennis and Brewster oysters, with their quite shallow cups and almost flat tops. We’ve found them to be among the easier varieties to shuck, for just that reason. The “hinge” on the top is readily evident, and pops with satisfying ease when the oyster knife is inserted nearby.

Brewster and Dennis oysters are similar in appearance and taste to Raspberry Point or Malpeques, other East Coast varieties, which are all characterized by their slightly minerally taste and generous liquor.  I favor smaller oysters, so the diminutive Beau Soleil is another favourite.  West Coast oysters, like Kumamoto or Kusshi, are slightly sweeter and creamier. I love their deep cups and ruffled edges.

People can be intimidated at the prospect of shucking an oyster, but it is really quite easy. It just takes some patience, and after a little practice, you’ll get the hang of it. The key is to get the right knife and for safety’s sake, purchase the glove while you’re at it. There are specially designed boards to hold the oyster in place, but many people simply use a towel. Here is a YouTube Video:

What to serve with them, and of course, what to serve them on!  First things first:  there are plates and utensils specifically for the purpose. 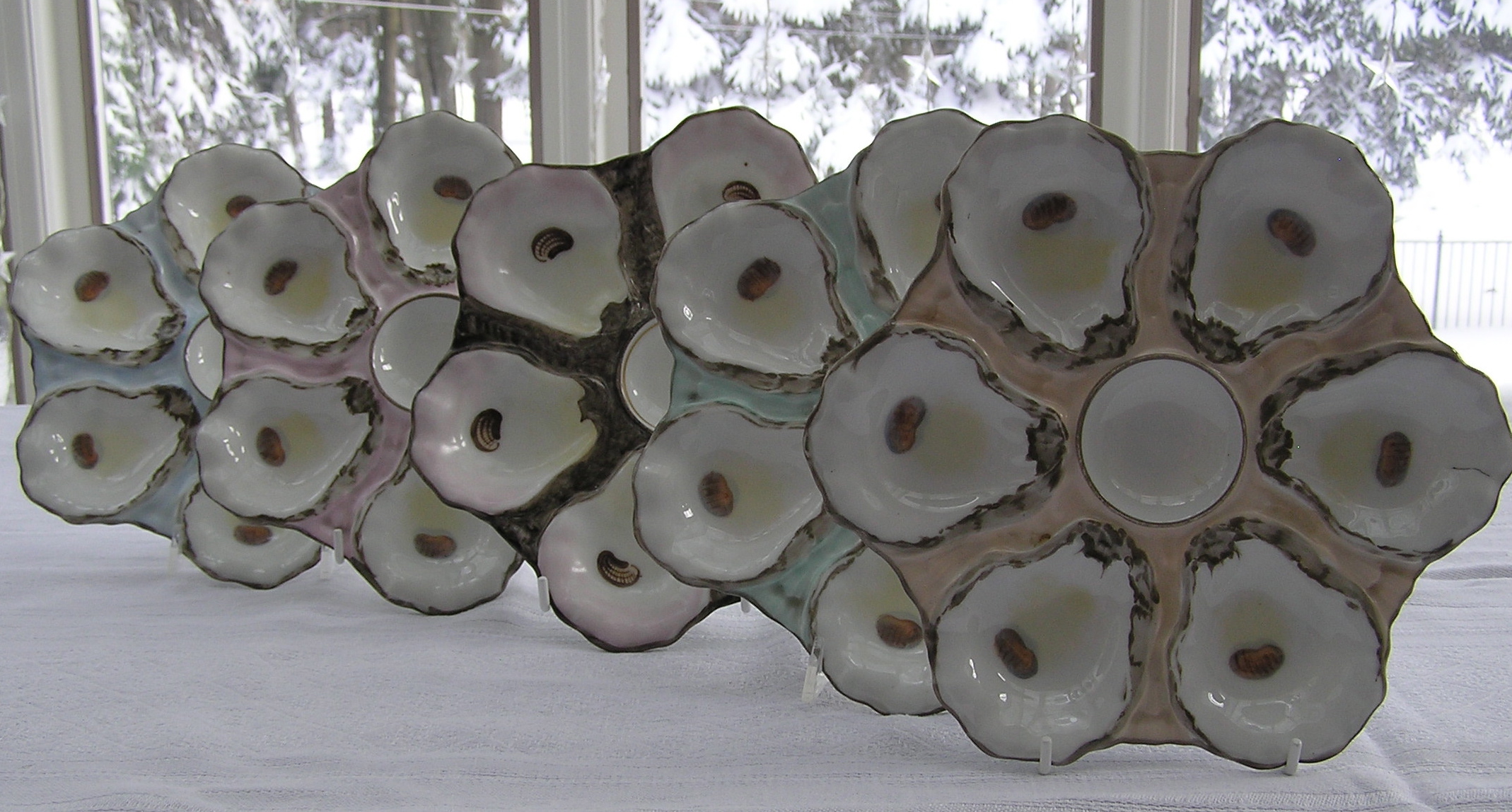 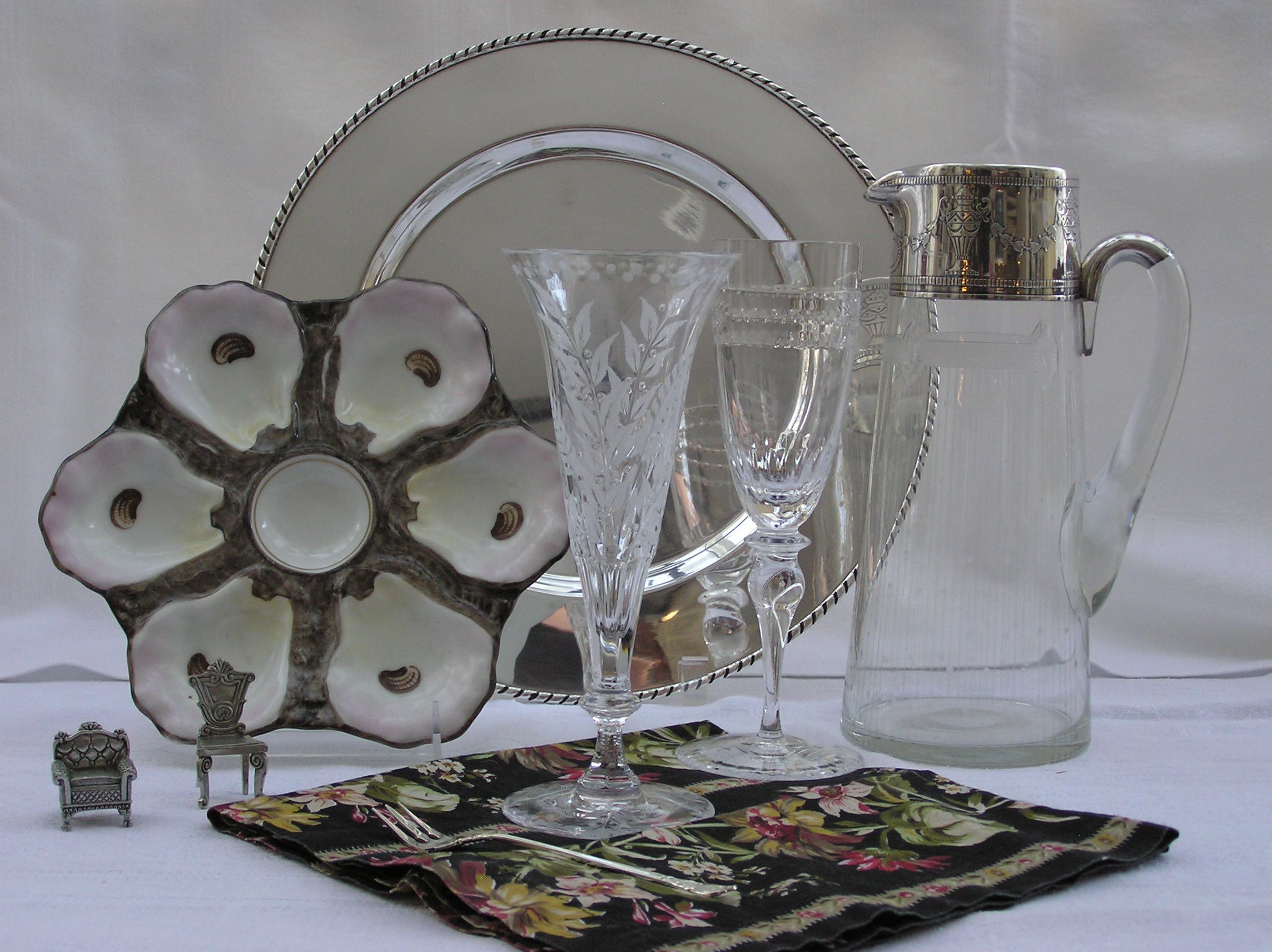 Oyster plates usually have five or six indentations in which the shucked oyster can rest, keeping it level so not to lose the scrumptious juices, also called the liquor.  The round indentation in the centre of the plate is used for grated horseradish or a small bowl of mignonette sauce. 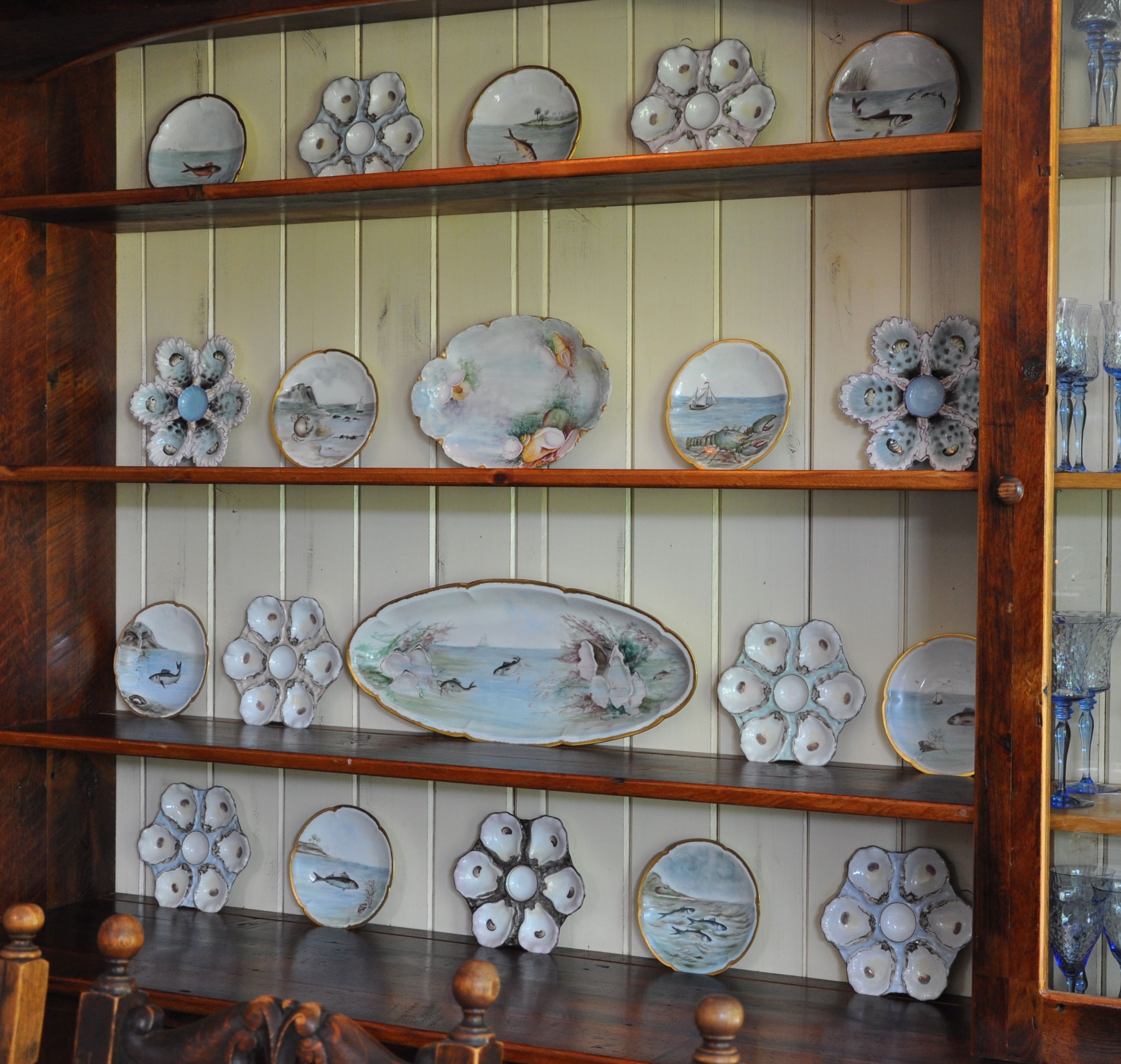 We came across these majolica oyster plates at a local antiques shop, Wisteria Antiques, on Route 6A.  The owners, Clay and Ken specialize in hand-painted porcelain and were also the suppliers of the plates and platters you see in the cabinet.

You can also serve them resting on a bed of partially crushed ice, on a regular plate, or platter, if you’re serving a crowd.

Oyster, or seafood forks, usually have three prongs and a short handle. Many sterling silver sets have an available choice. Check out replacements.comto see if your pattern has one. There are also many stainless varieties. You might want to also provide a demitasse or small tea spoon for the mignonette.

Lots of people like hot sauce with their oysters. I prefer freshly grated horseradish,a squeeze of lemon and some mignonette. (Tip:  Use a microplane to grate the horseradish).  To make the mignonette, simply take equal parts red and white wine vinegar and add some minced shallot. Allow the shallot to steep in the vinegars for up to an hour.  You can then strain out the shallot, or simply serve as is.  It’s personal preference.  Serve in a small ramekin or a salt cellar alongside the oysters.

Fin Cape Cod has begun serving their oysters with a wasabi caviar and an horseradish granita. Absolutely delicious.

Champagne or sparkling wine is a classic pairing with oysters. A citrusy Sauvignon Blanc from New Zealand like Kim Crawford, or Cloudy Bay also go beautifully.