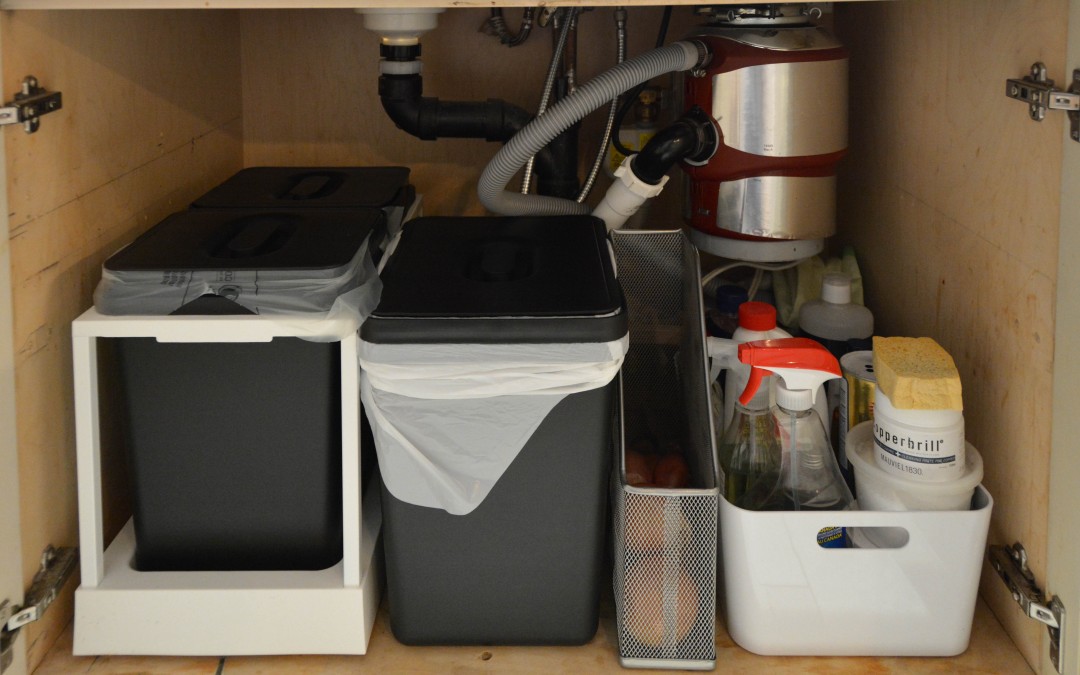 I’m on a kitchen organization quest, and the object of last week’s focus was the dreaded under-the-sink cabinet. You know the one. The one where you try to organize various garbage containers, cleansers, and root vegetables (like onions)  simultaneously, while accommodating the plumbing which renders most containers hopelessly oversized or plain ill fitting. And then try to keep the whole thing clean.

In Canada we recycle several waste categories: tins, glass, paper, green-bin (kitchen organic waste) and yard waste. Some municipalities combine tins & paper. Ours doesn’t, so they have to be separated. Garbage day involves four different containers plus any bags of yard waste. It’s quite a production!  And woe betide the hapless soul who fails to recycle correctly.  A neon orange sticker is placed on the offending article and the garbage remains on the curb.

Until recently I had a round swing-out container for the “regular garbage” attached to the left door of the cabinet and a single green-bin under the sink, along with several wire mesh baskets of cleansers and one lonely basket of onions. Containers for recycling tins and paper resided on the porch, and involved a trip outside every time one needed to make a deposit.  The system was ok, but not great. 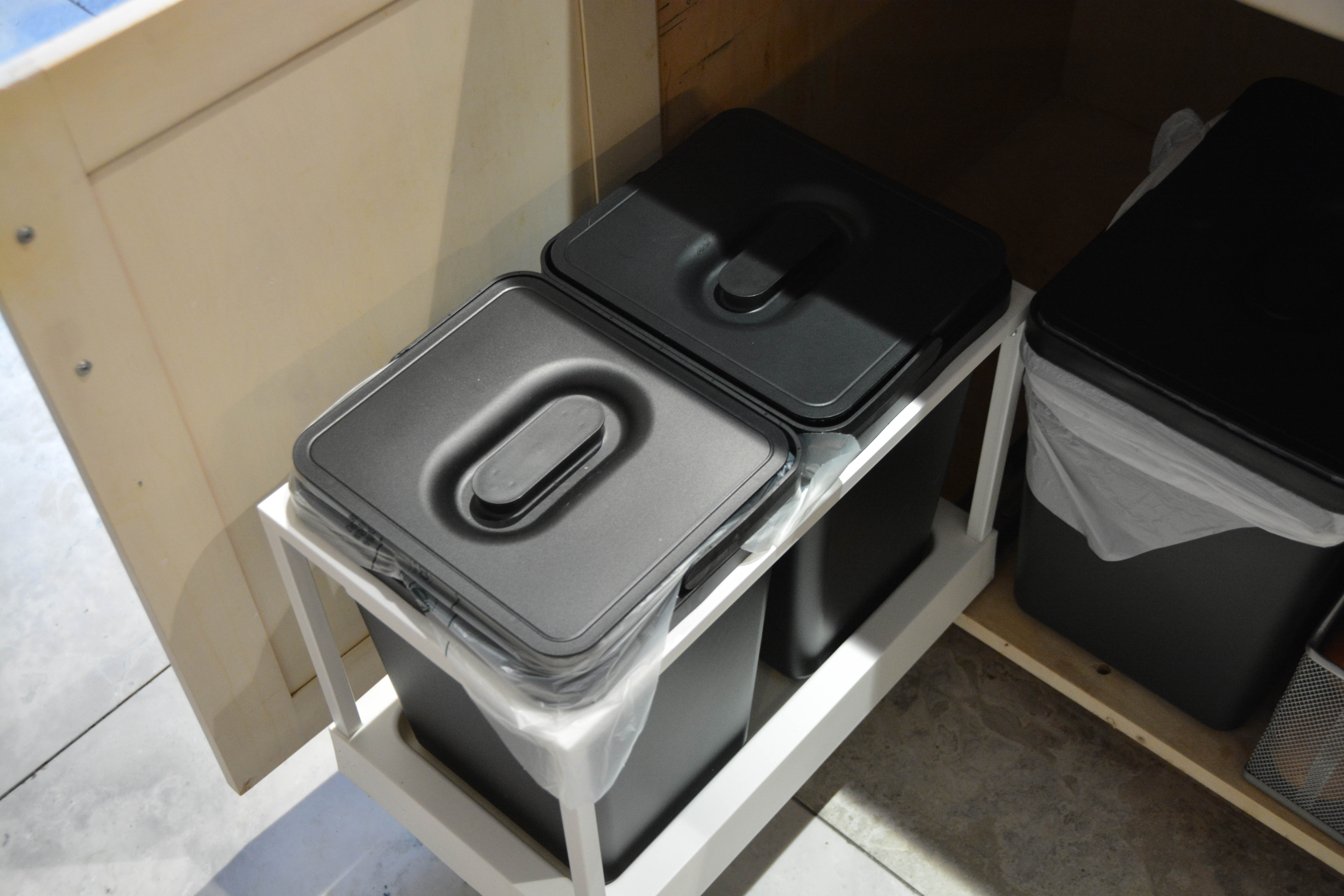 Then I found this pull-out recycling container, ULRUSTA at IKEA. Brilliant. 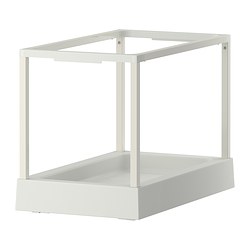 It’s a cinch to install and fits a few combinations of containers –  two medium sized, which I’ve shown here, or one large plus a small one to hold wet sponges, or one really large. All come with lids. I opted for the two medium so I could recycle green (kitchen organic) in one and tins in the other. Paper still goes outside by itself (you can’t have everything). The large lidded container to the right of the pullout unit is for regular garbage. 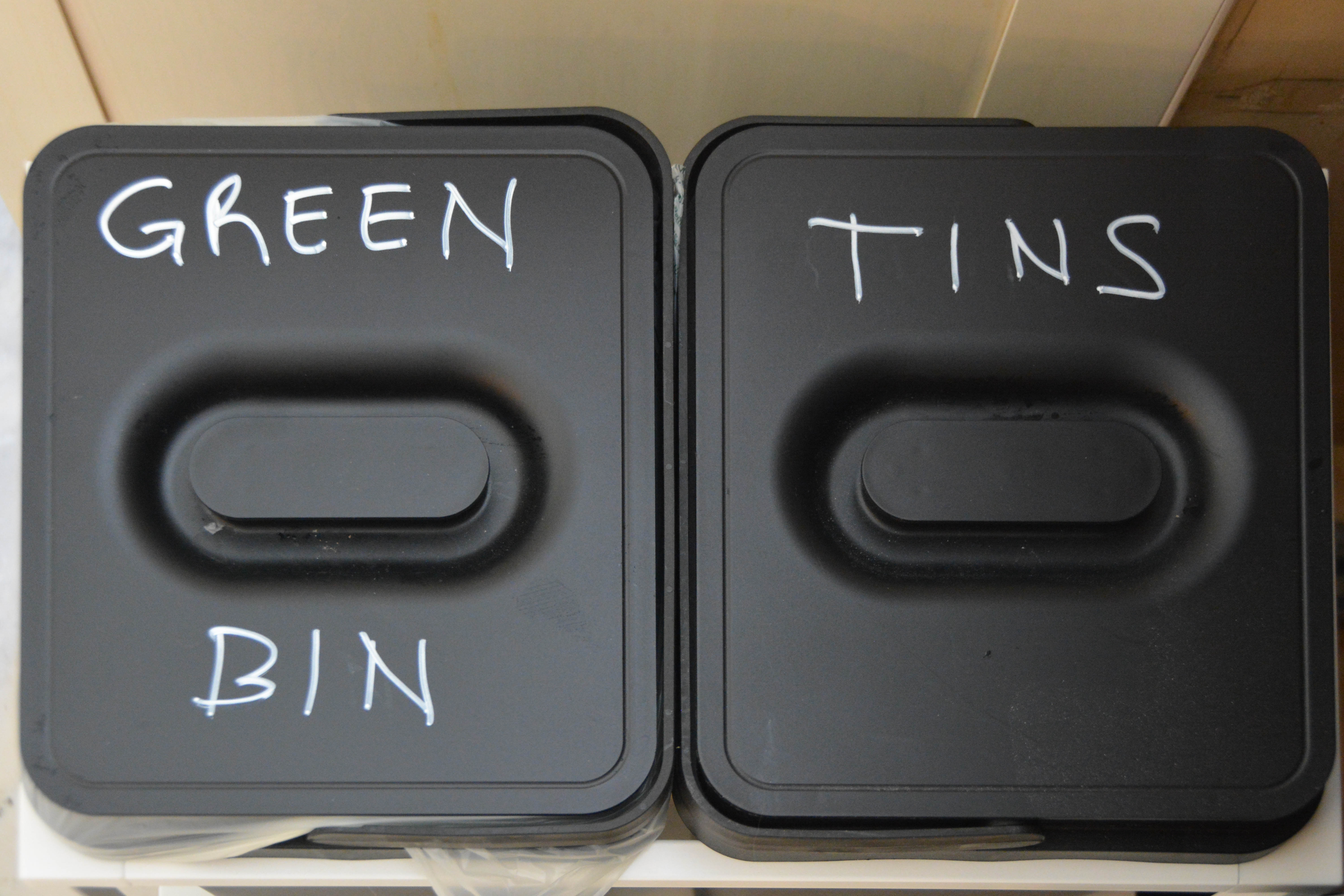 I decided to use a chalk marker to label the various bins for the benefit of visitors (and the absent minded permanent residents). 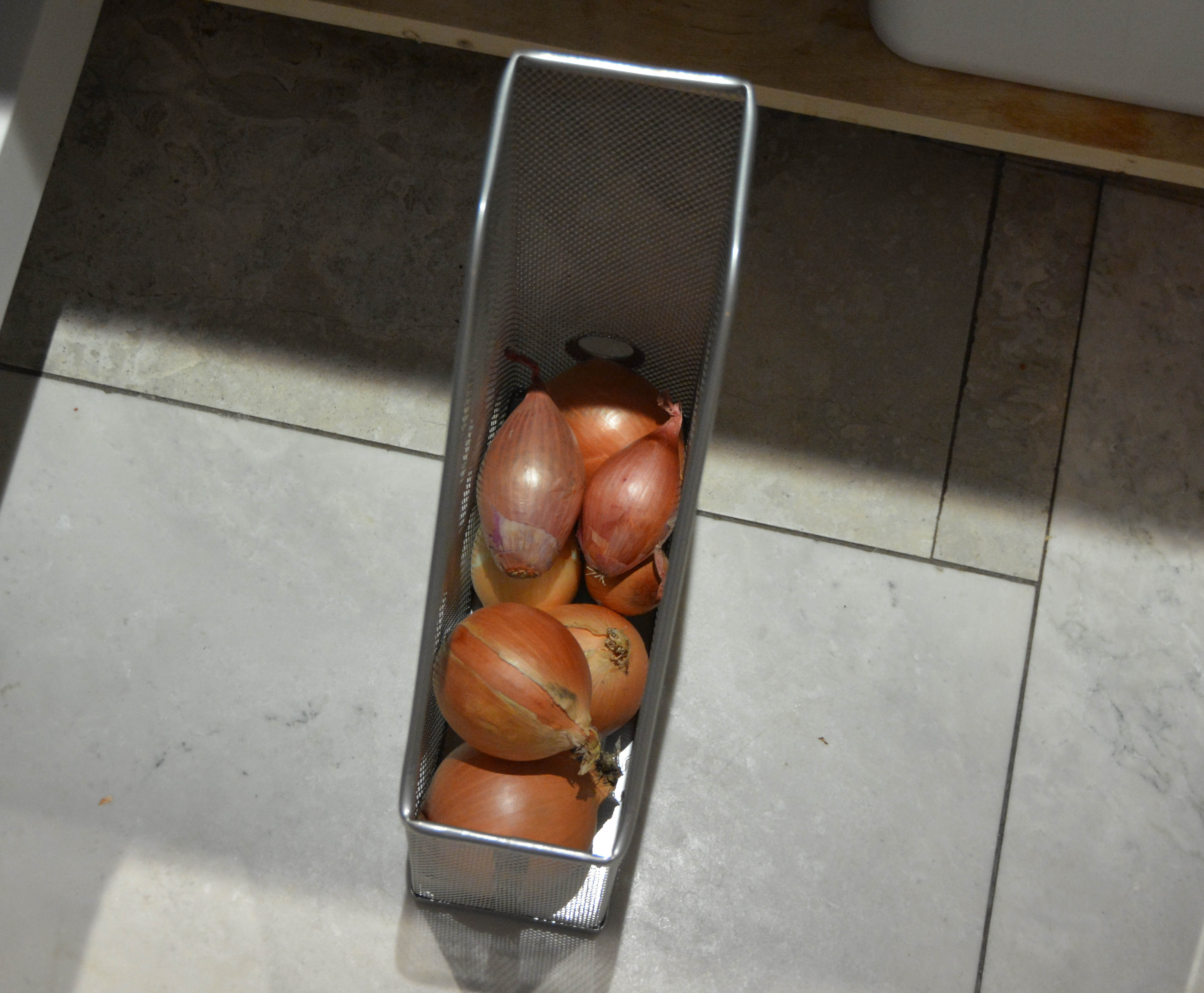 Onions and shallots how have a home inside a wire mesh magazine holder called DOKUMENT. I got the idea from Pinterest, and tracked it down at IKEA when I was there picking up the recycling container. 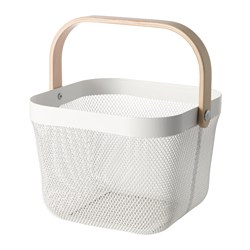 They also have RISATORP, a more traditional wire mesh storage container for fruits and vegetables, but I liked the narrow aspect of the DOKUMENT container. 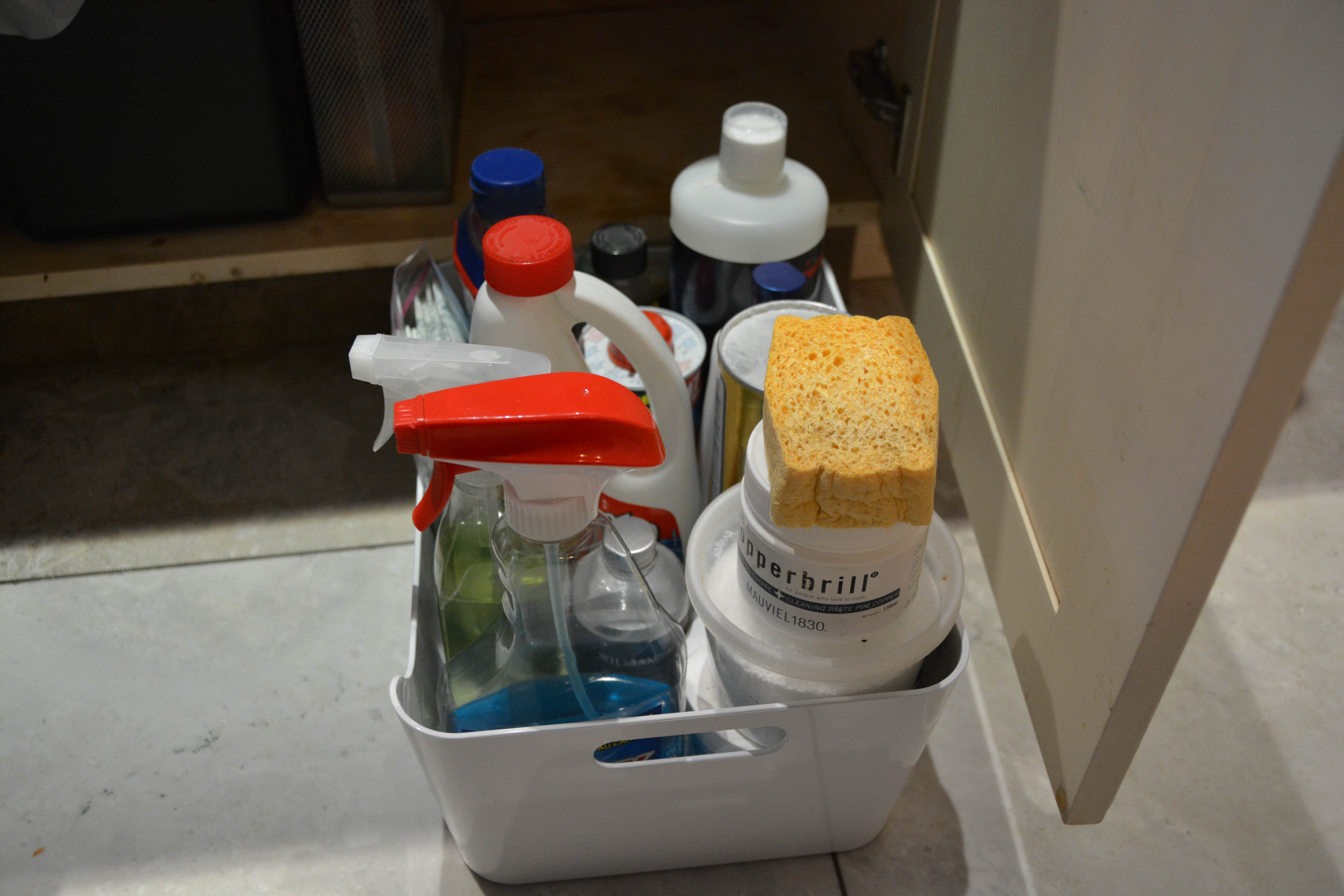 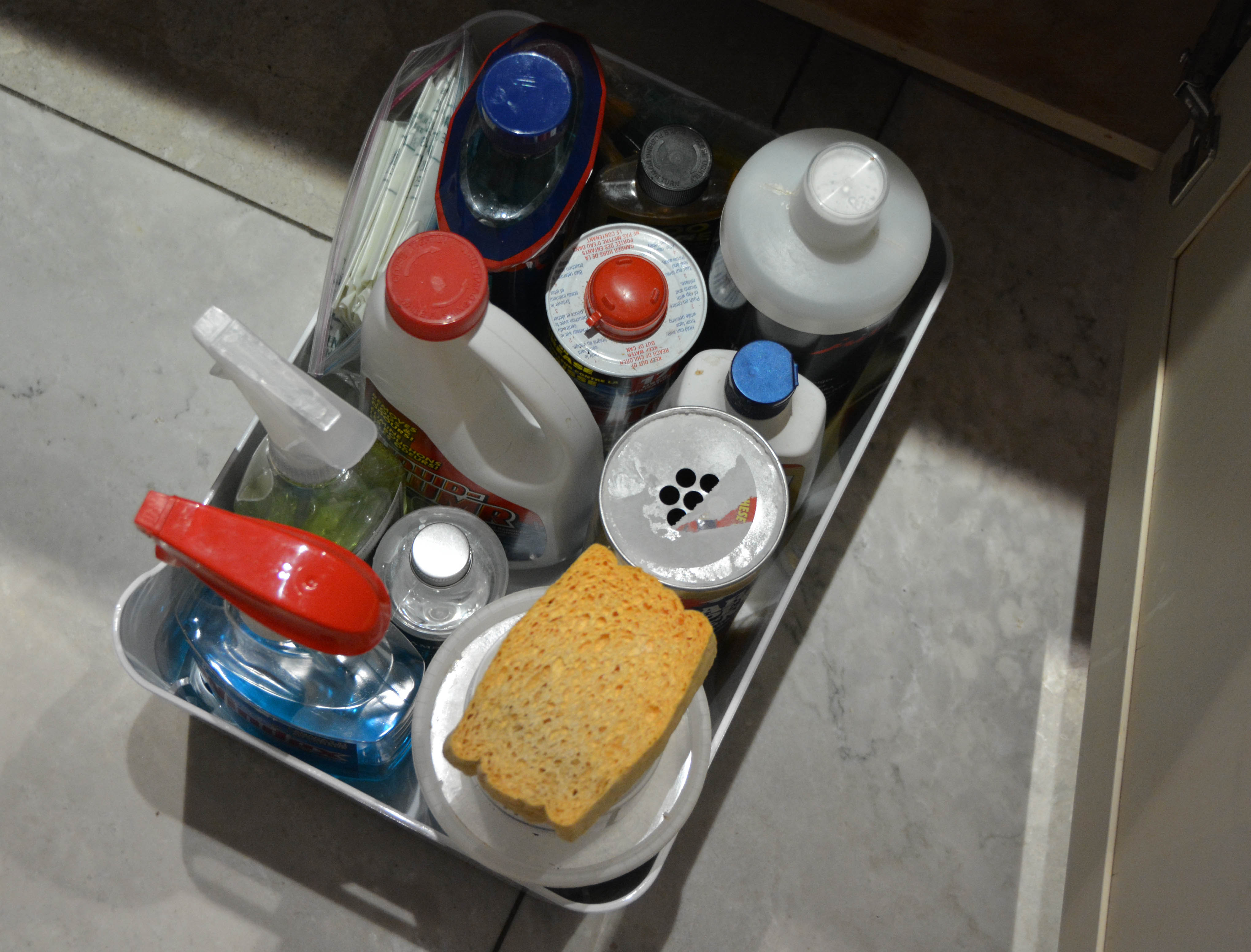 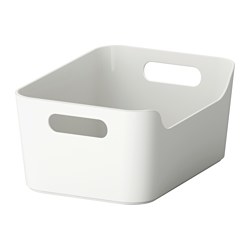 And lastly, all the cleansers (heavily edited, mind you), fit into the large VARIERA plastic container. 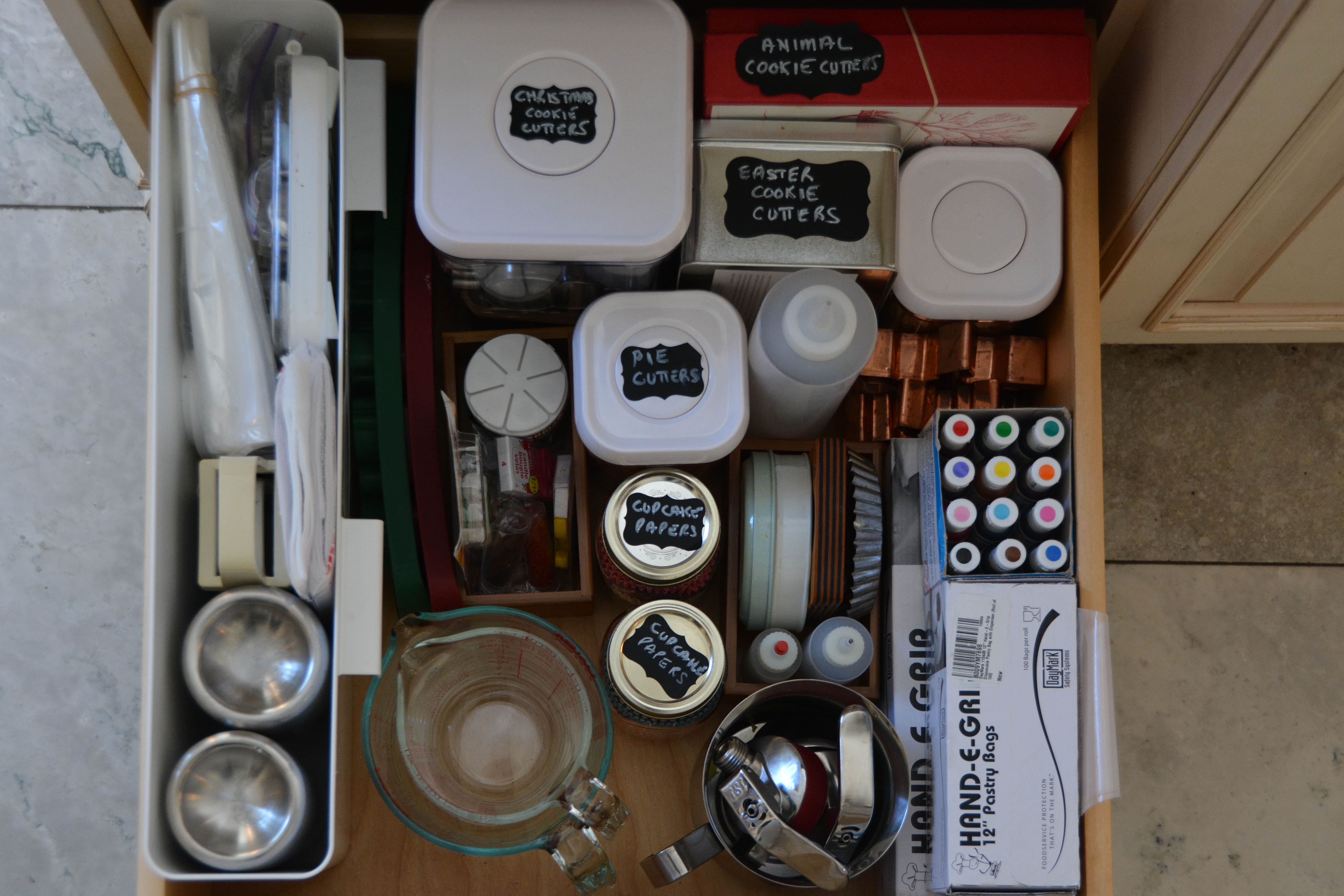 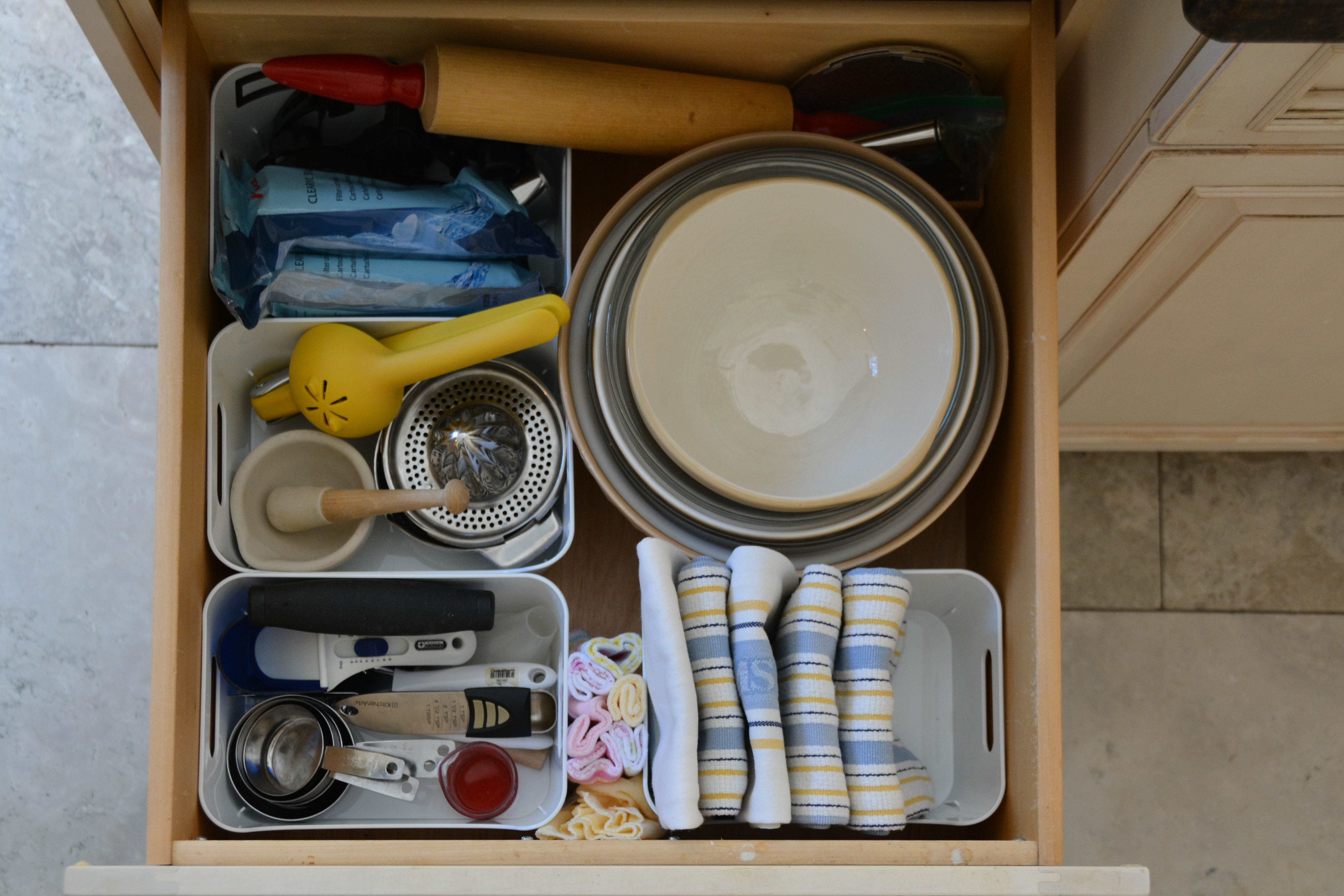 I’ve used several of the sturdy containers in the smaller size to organize baking supplies in my pullout drawers.

There are still several other cupboards to tackle, but I have that deeply virtuous feeling that goes along with being organized (however temporarily!!). Next up is installing some pull-out wooden trays in a very awkward, deep, bottom cupboard. I’ve checked online and there are none available that are wide enough for the space. My husband, Glenn, will build some and is currently researching bottom-mounted sliders so we can install the trays on the existing shelves. Stay tuned…