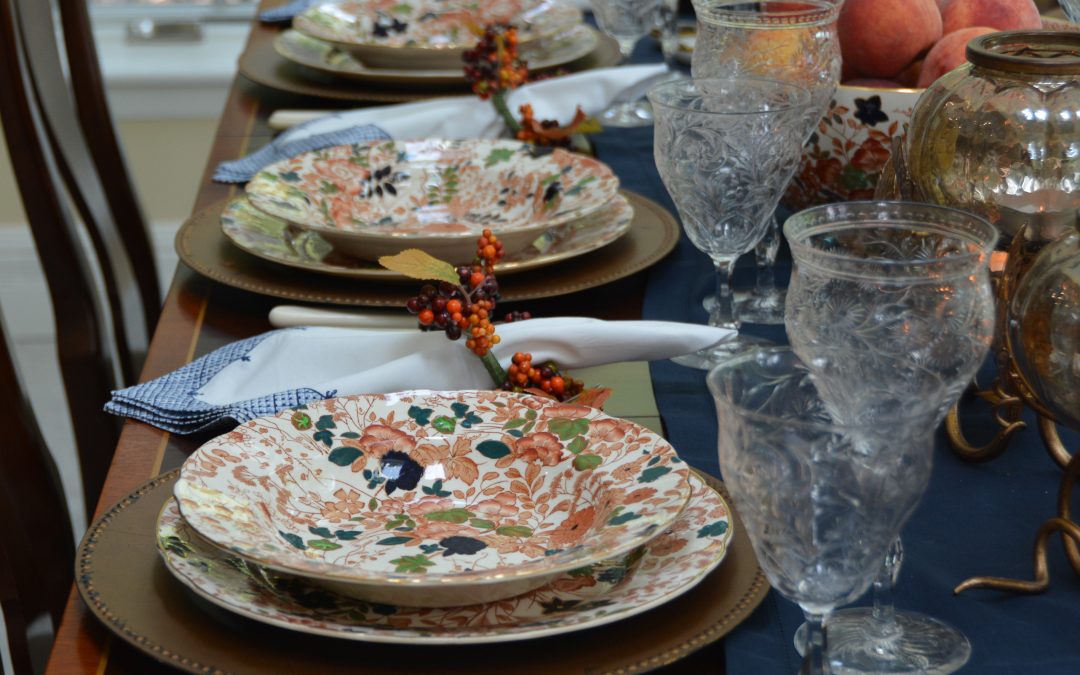 Imari style patterns are a tableware classic, featuring bold tones of deep orange and cobalt blue. Bittersweet by Royal Cauldon combines the colours of Imari with an all-over-chintz pattern, featuring extra highlights of teal and apple green with touches of gold on sturdy ironstone. The result is beautiful and durable. A great combination. 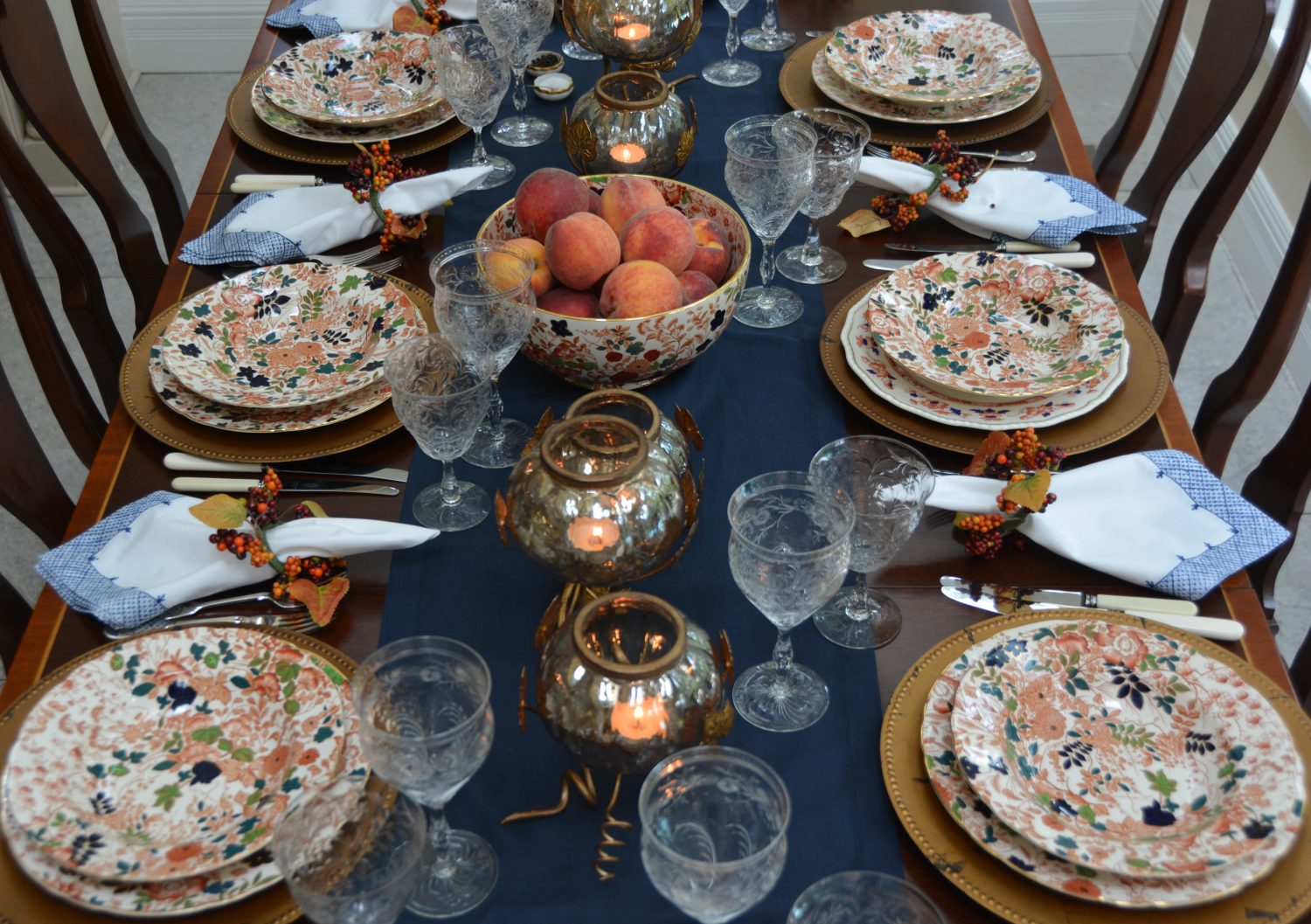 Royal Cauldon (which auto-corrupt keeps changing to “Royal Cauldron”) has an interesting history. I did a bit of digging around to try and date the Bittersweet pattern, and it seems it was made between 1930 and 1962, according to www.thepotteries.org. 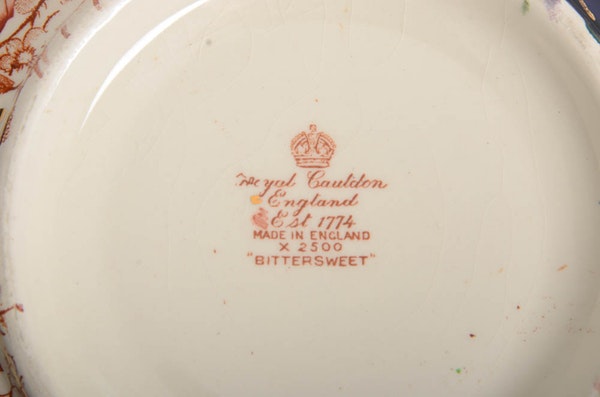 You will note on the backstamp that Royal Cauldon claims 1774 its year of establishment. This is a bit of a stretch, but in keeping with the common practice of potters to grasp at straws (or fragments of pottery found at the site they were currently occupying) in an effort to establish longevity as a mark of stability. Previous owners of the Cauldon works (Brown-Westhead, Moore & Co) were “Potters to Her Majesty”, which is where the crown came from, and was the reason Royal was affixed to the Cauldon name after 1930. 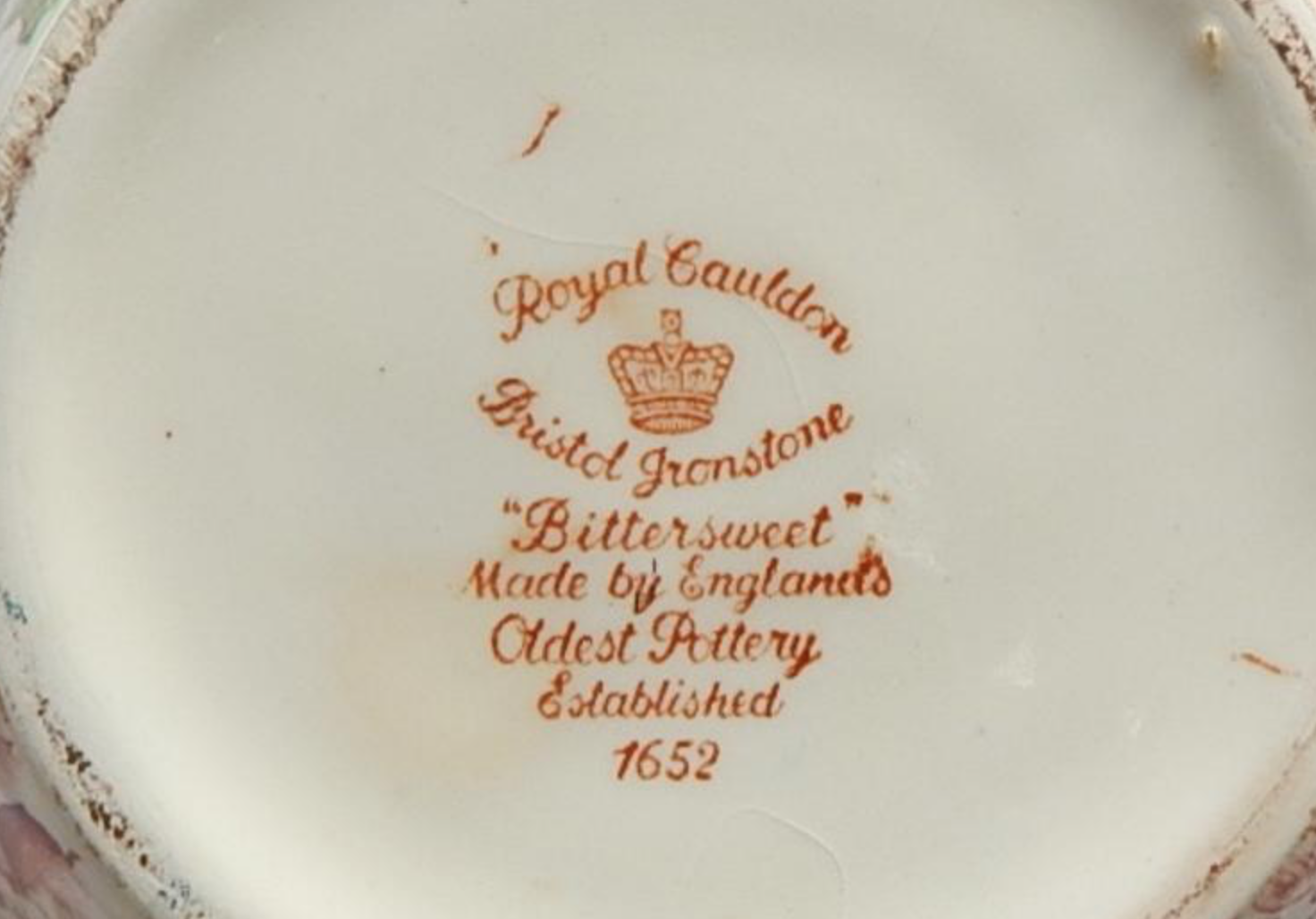 The owners of Royal Cauldon went even further in their “fake news” history after another business reorganization in 1962. Goods produced after 1945 claim to be “Made by England’s Oldest Pottery Established in 1652”. It appears there is an inverse relationship between the date of establishment and the age of the actual pottery produced. And we think obfuscation is a modern thing 🙂

The Potteries.org fills us in:

“Pountney & Co. Ltd. of Bristol took over the business of Cauldon Potteries Ltd. and incorporated the business into their existing factories at Bristol. In the same way that Cauldon Potteries Ltd used “est 1774” – even though it was not true; Pountney claimed to be able to trace their Bristol factory origins back to 1652. They did not start to use the “Est 1652” claim until c.1945.

The fact of the matter is that some pottery fragments were found which bore the date 1652 and 1653 – these fragments were evidence of a previous works which had been built over and was later occupied by Pountney. So the claim “England’s Oldest Pottery Est 1652″ was fanciful in the extreme; and Royal Cauldon had no physical connection with Bristol – the Cauldon Works were established in 1802 some 150 miles away in Stoke-on-Trent.”

Hmmm. “fanciful in the extreme”.  I like their way with words. Like “your nose is growing…” But back to the table! 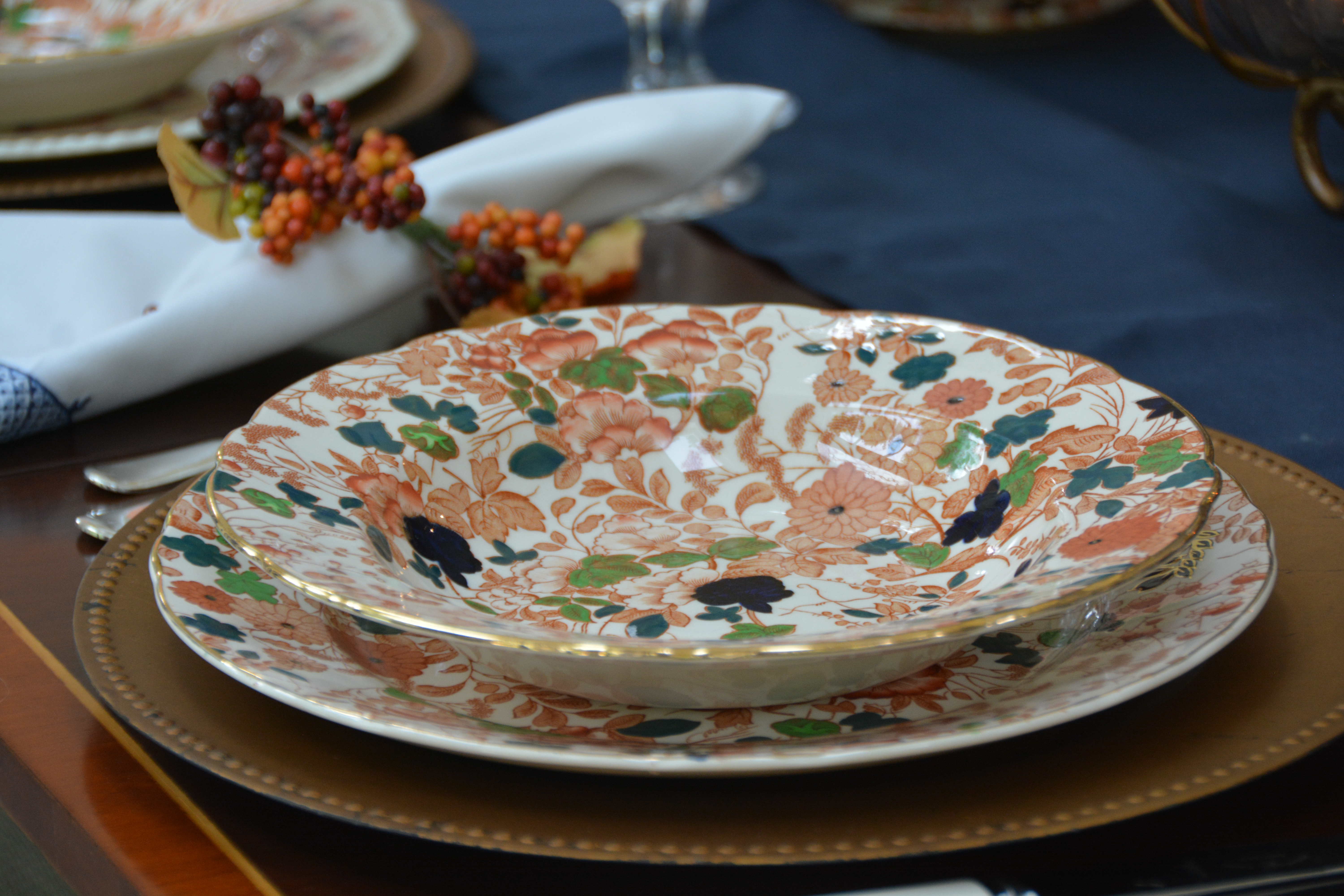 The soup bowls are a wonderful size for pasta, stew or any thick, creamy soup. 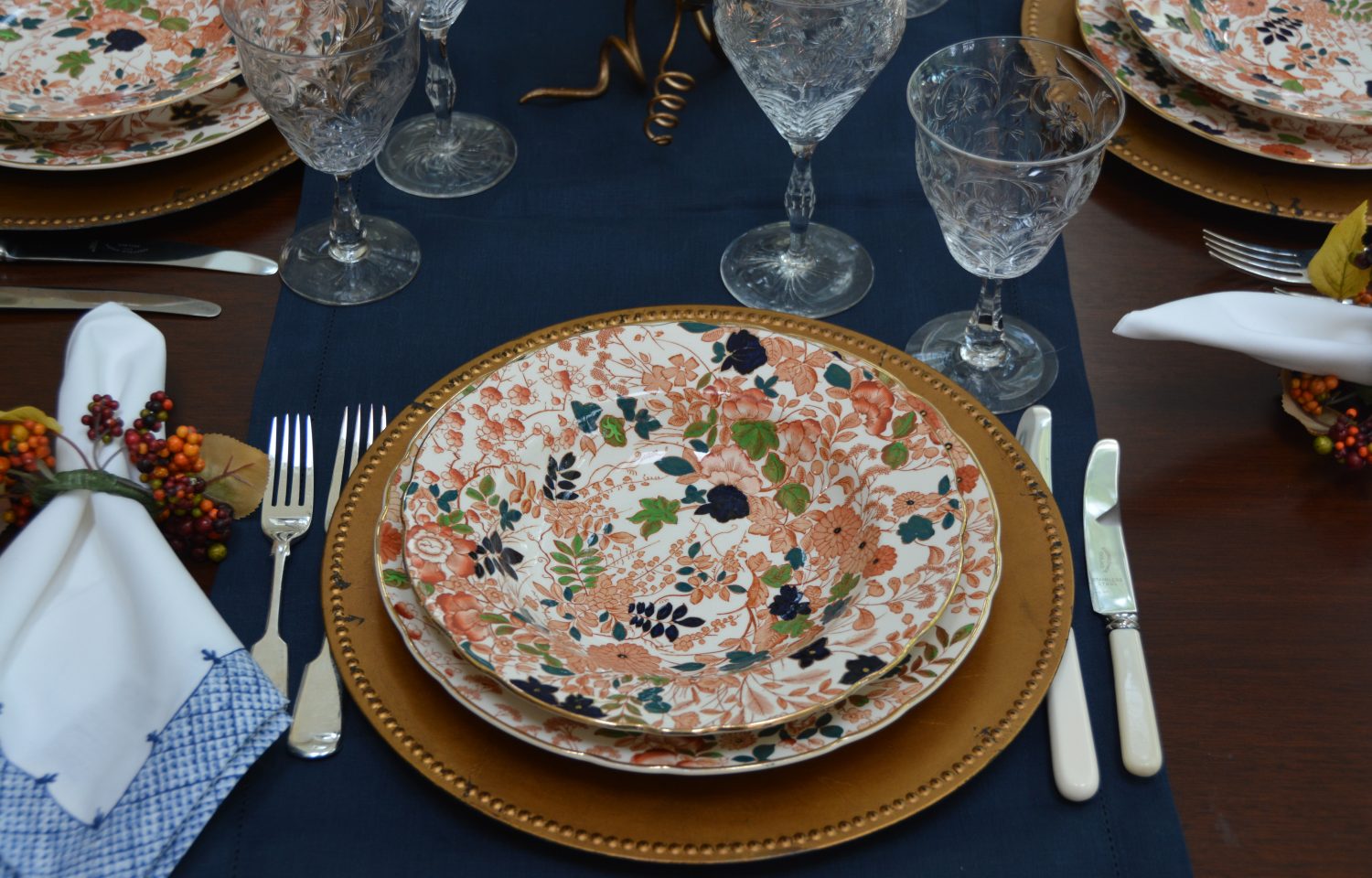 In styling the table, I used a navy runner to echo the deep cobalt in the plates, and anchored the settings with some antiqued-gold chargers from Chintz & Co. acquired many years ago. 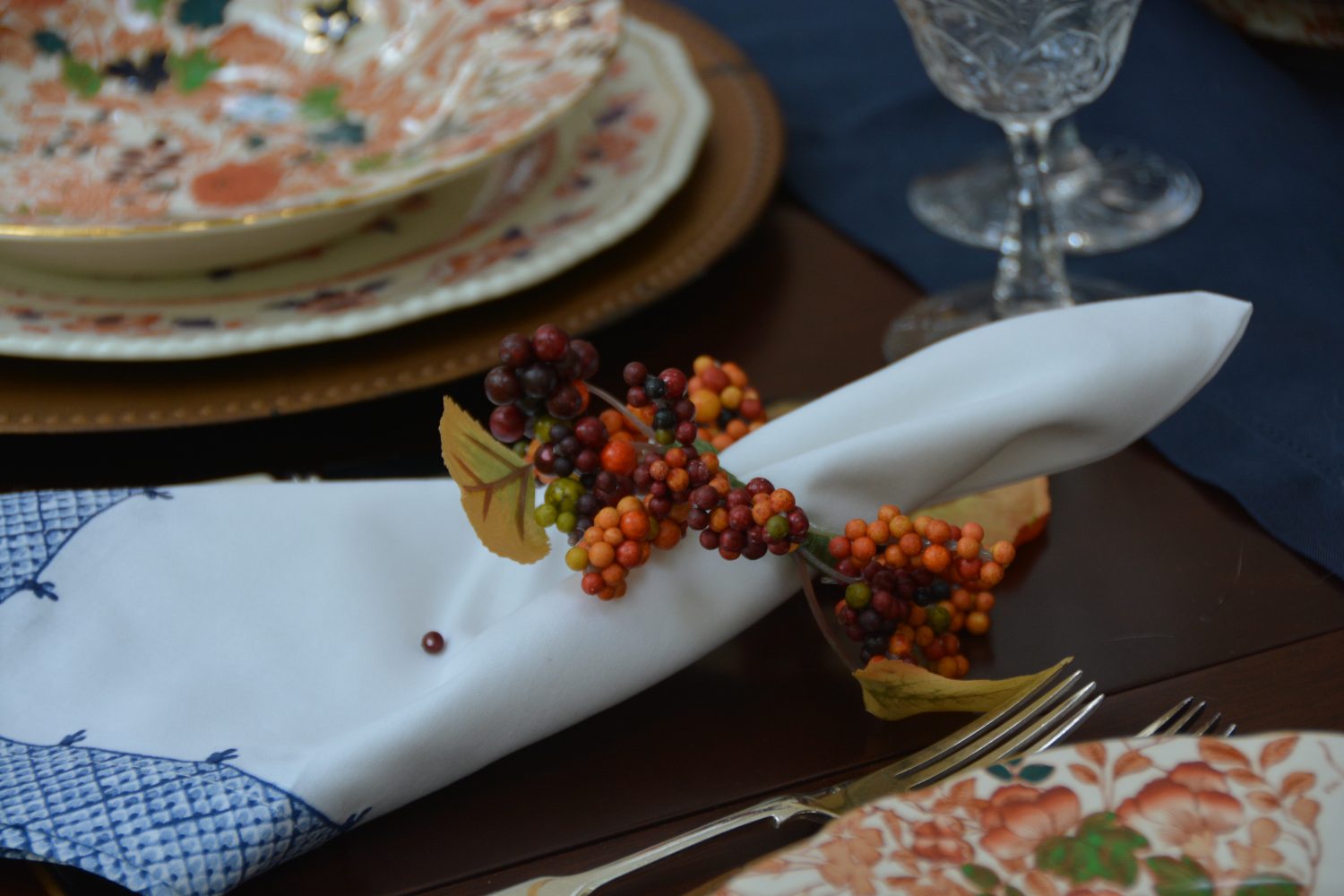 The  Harvest Wreath napkin rings are from Pier 1, and the navy edged napkins are from Williams Sonoma a couple of years ago (now discontinued). 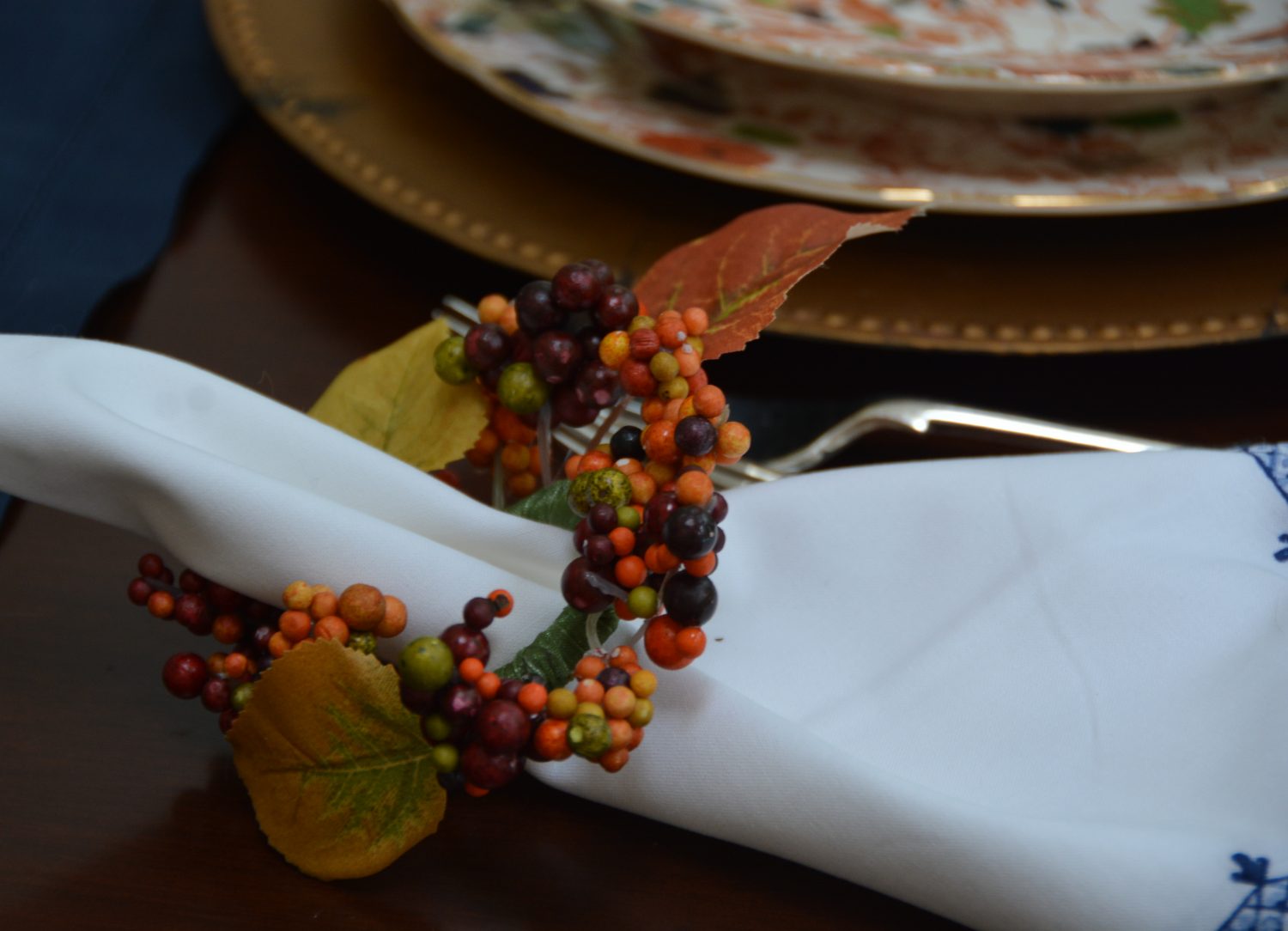 The napkin rings are bit delicate, but I very much like the variegated colours. 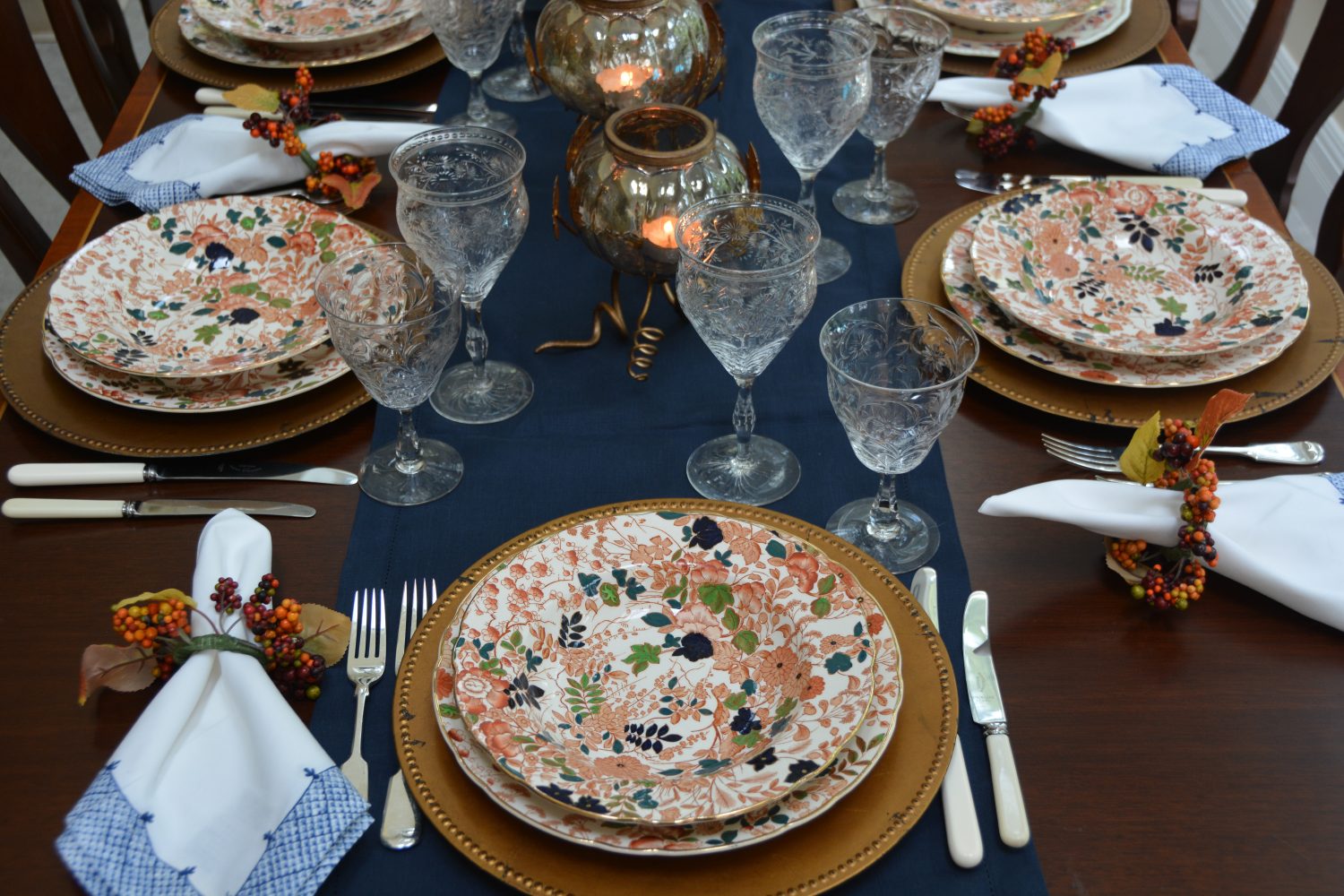 With all that deep colour and activity going on, I went with clear glassware, whose etchings echoed the pattern in the Bittersweet pattern. 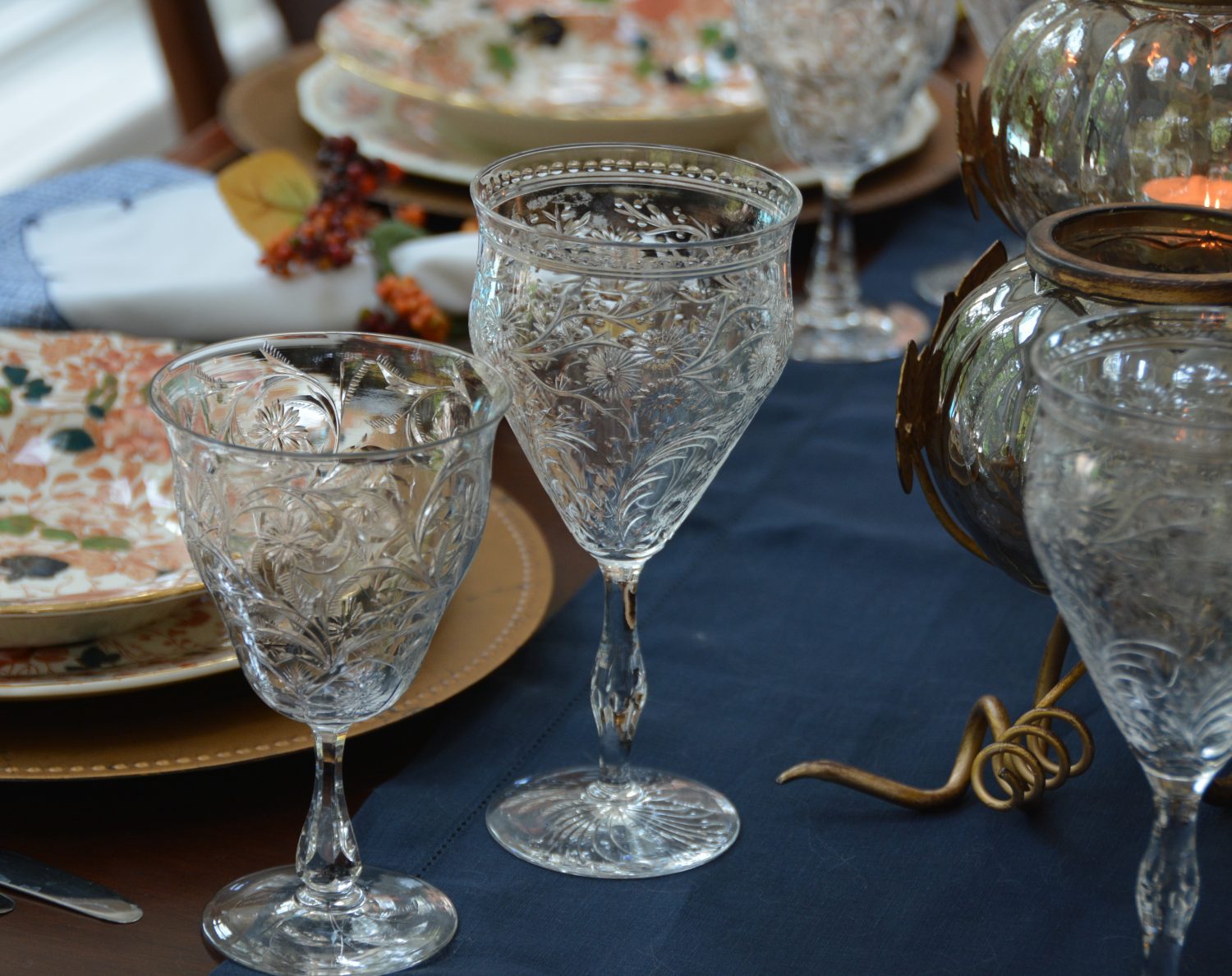 The larger glasses are wheel-cut by Webb, and the smaller ones are by a different, unnamed manufacturer. Both came from Elise Abrams Antiques. 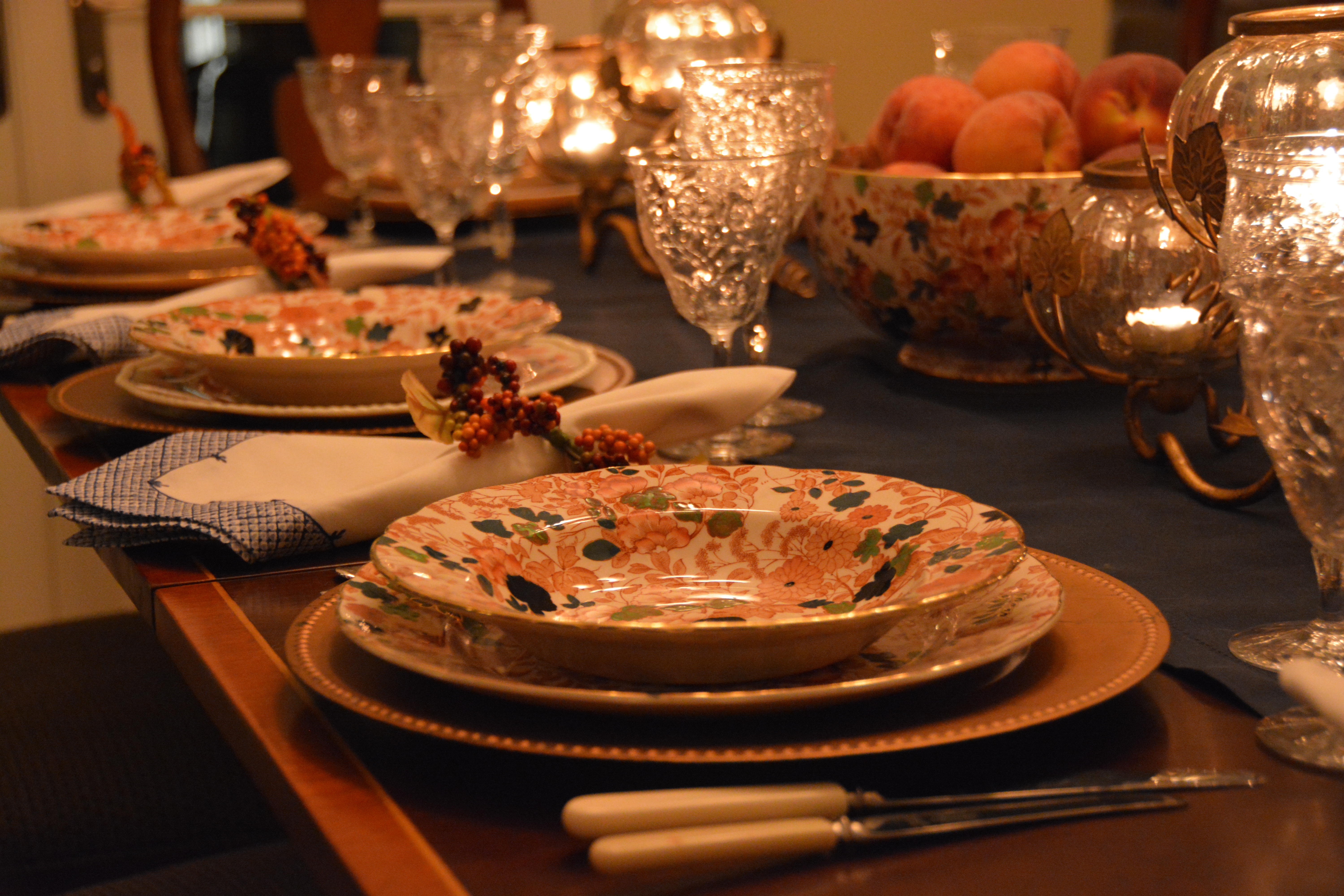 The table just glowed at night. 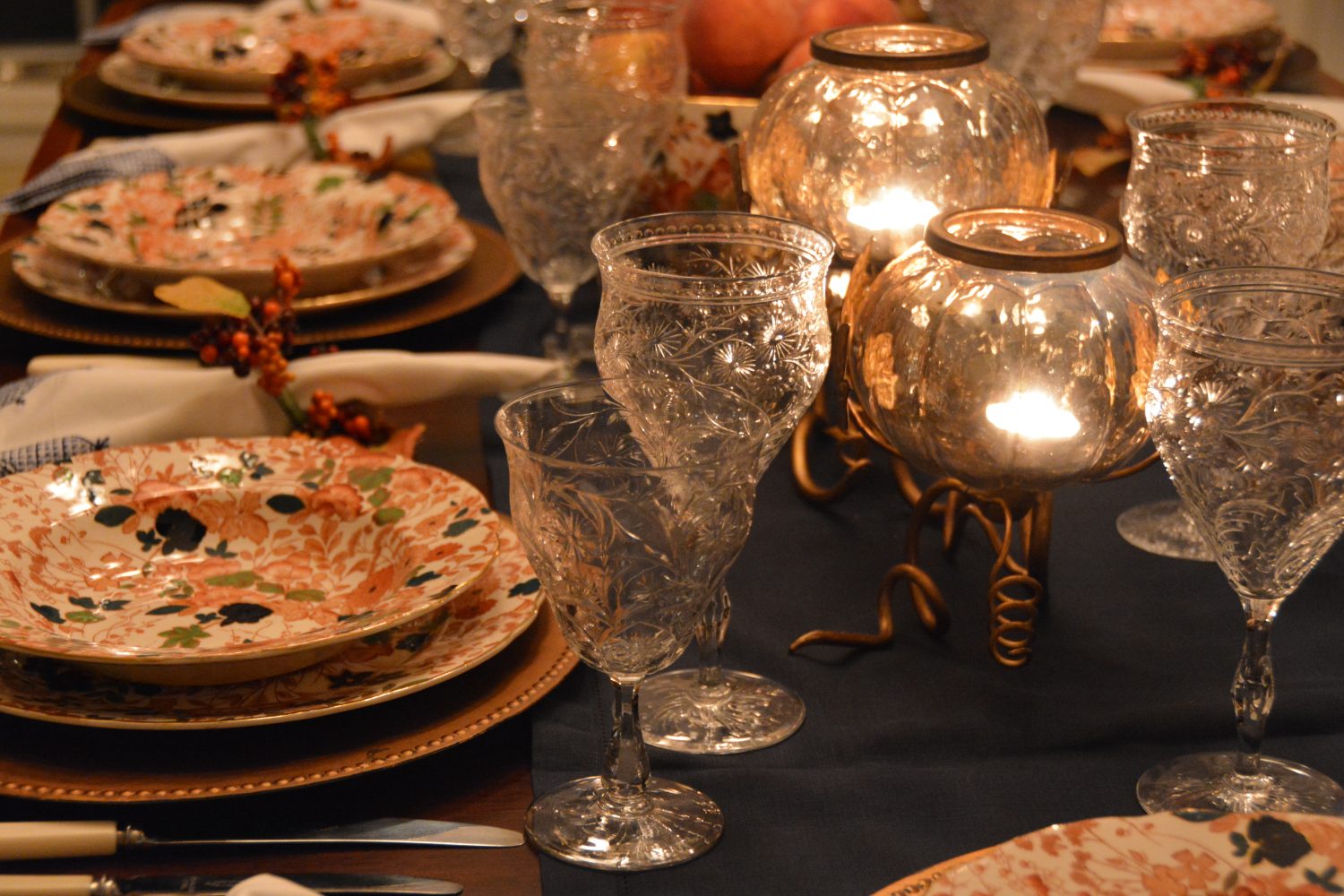 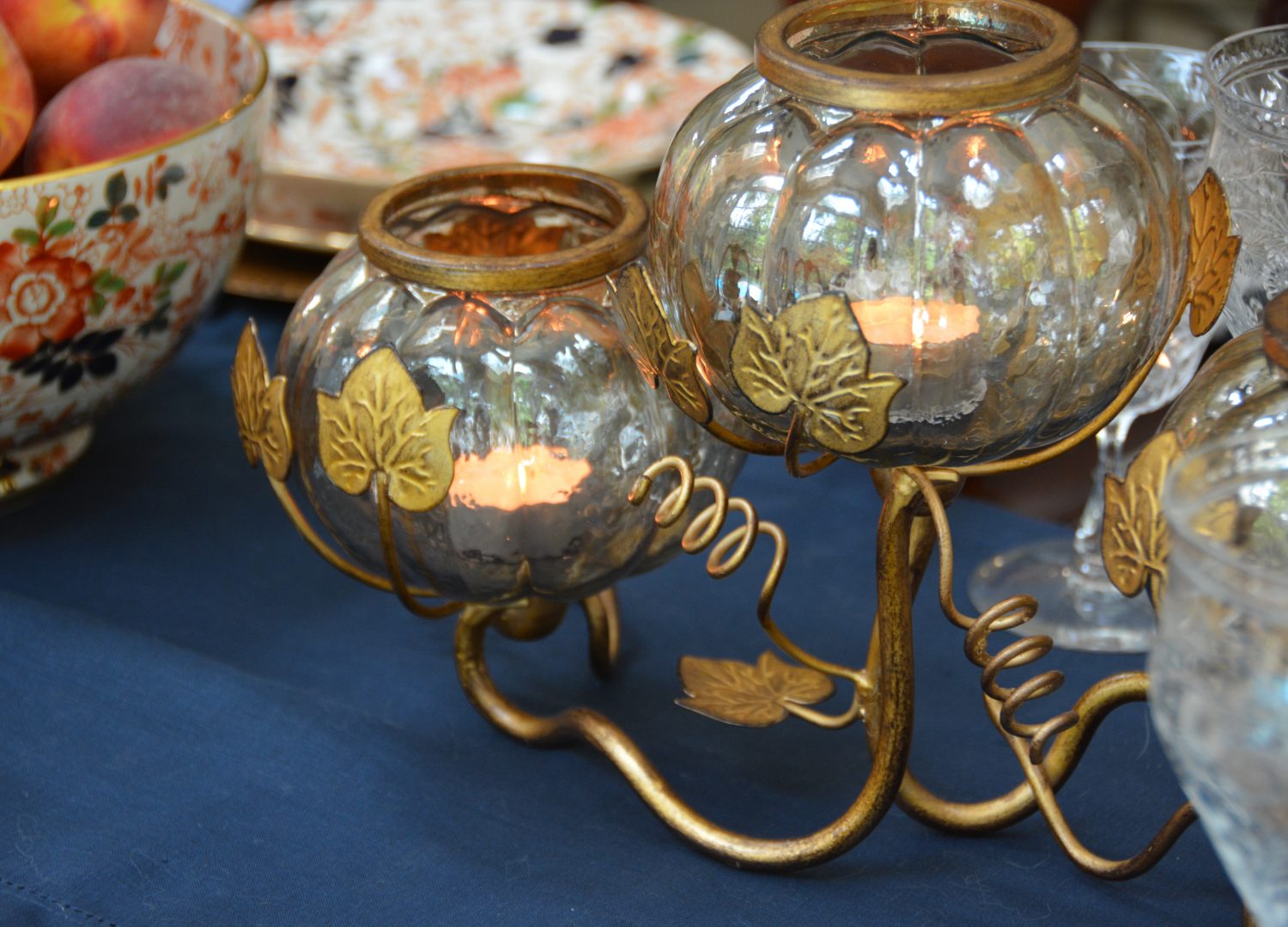 I think I’ll get a lot of use out of them. The toned-down antiqued gold is very versatile, and I like the vine detail. 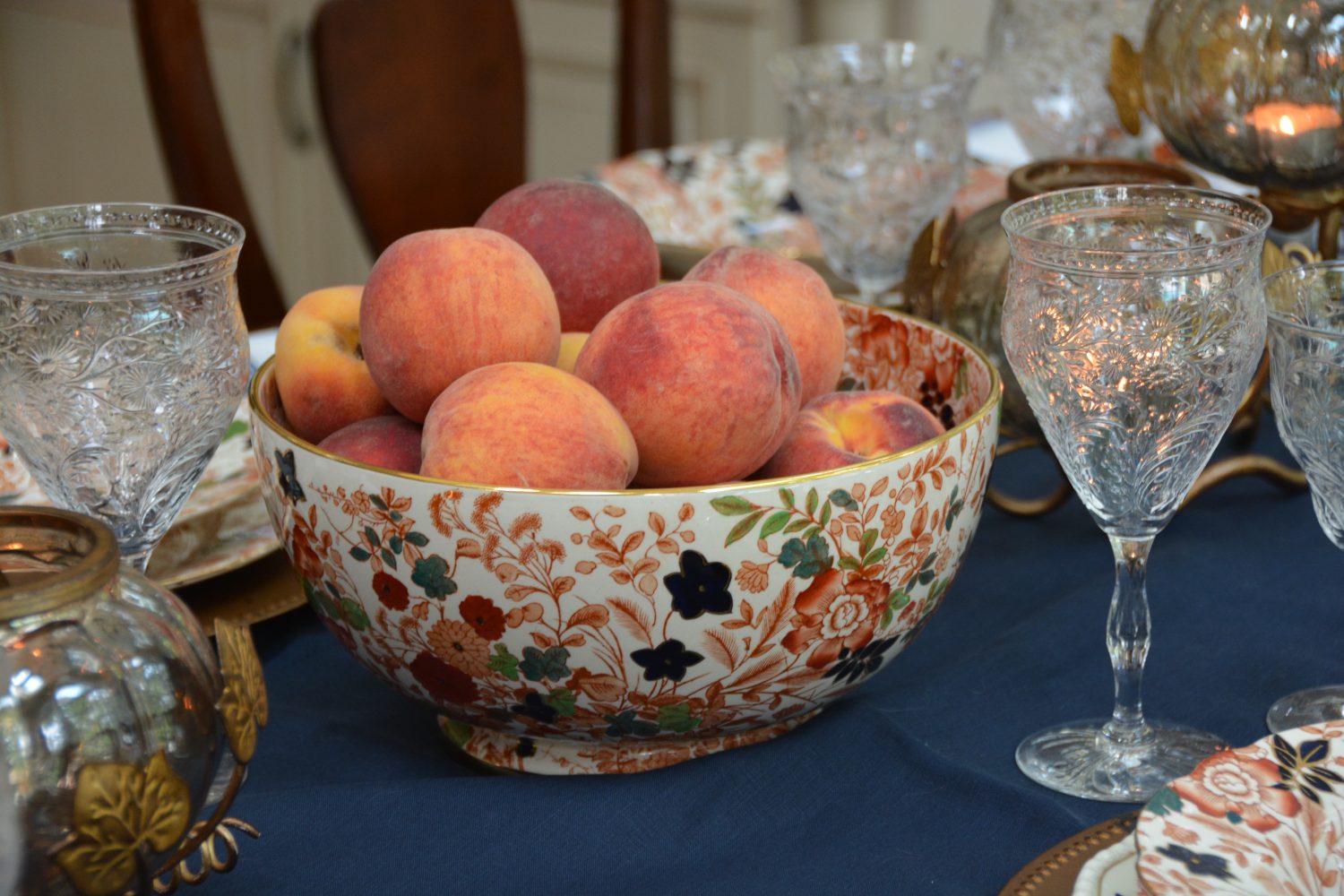 I added a bowl of peaches to the centre of the table, set between the two candleholders. 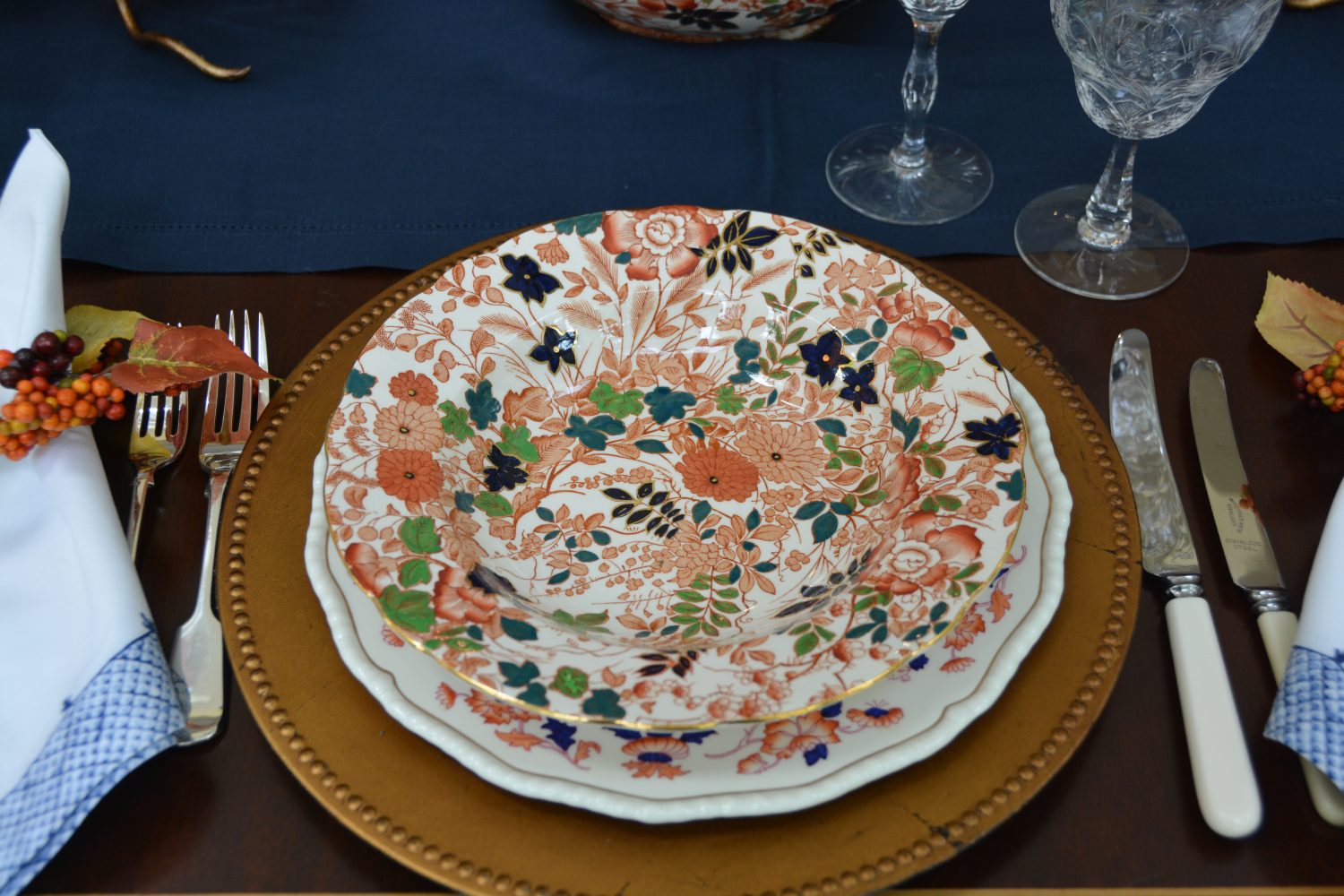 I was able to get eight soup bowls, but only seven dinner plates. I added one plate in The Berkshire by Royal Doulton to bridge the gap. 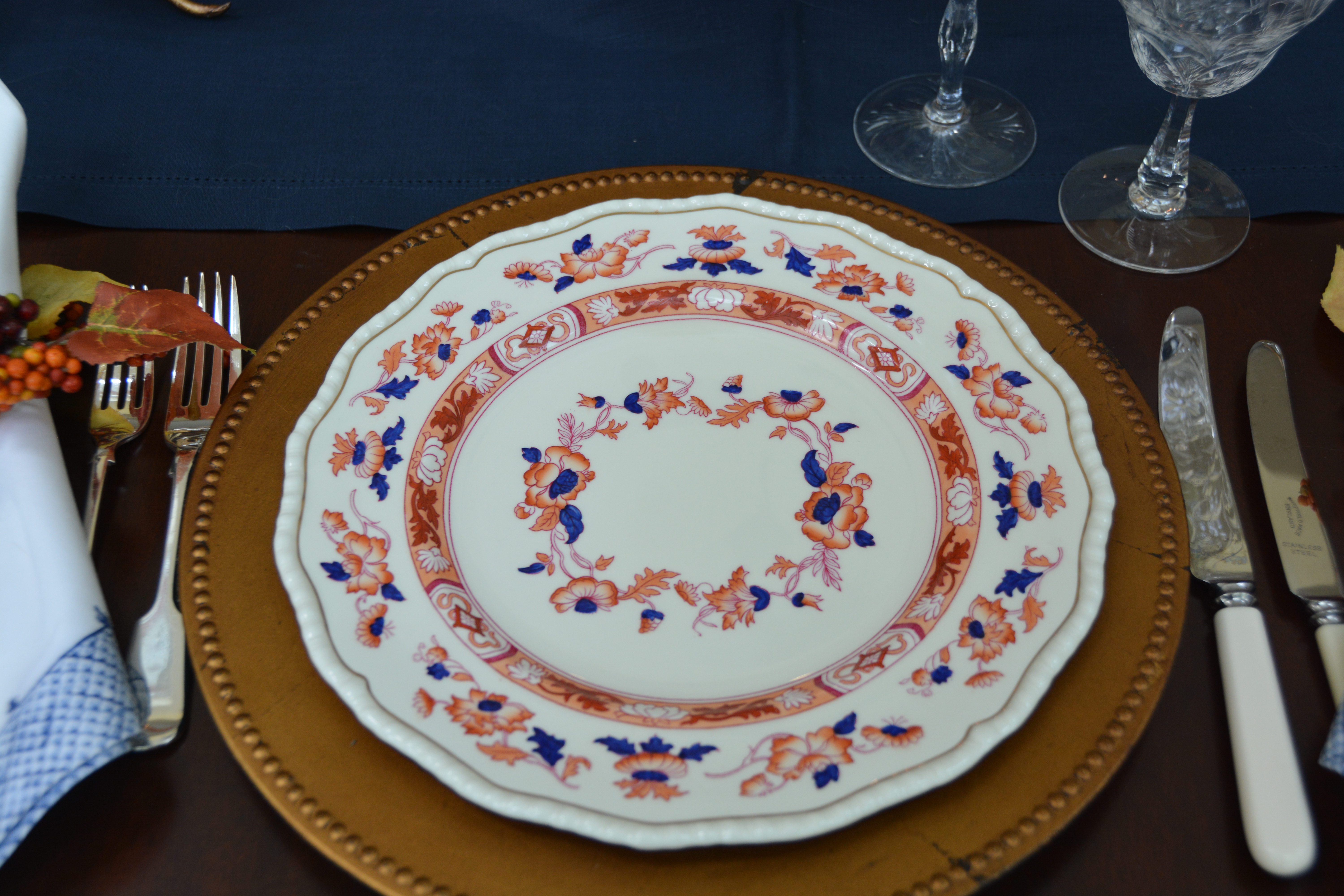 It’s similar in colour and shape, and is a worthy substitute, don’t you think? I’m keeping my eye out for another dinner plate in the Bittersweet pattern. 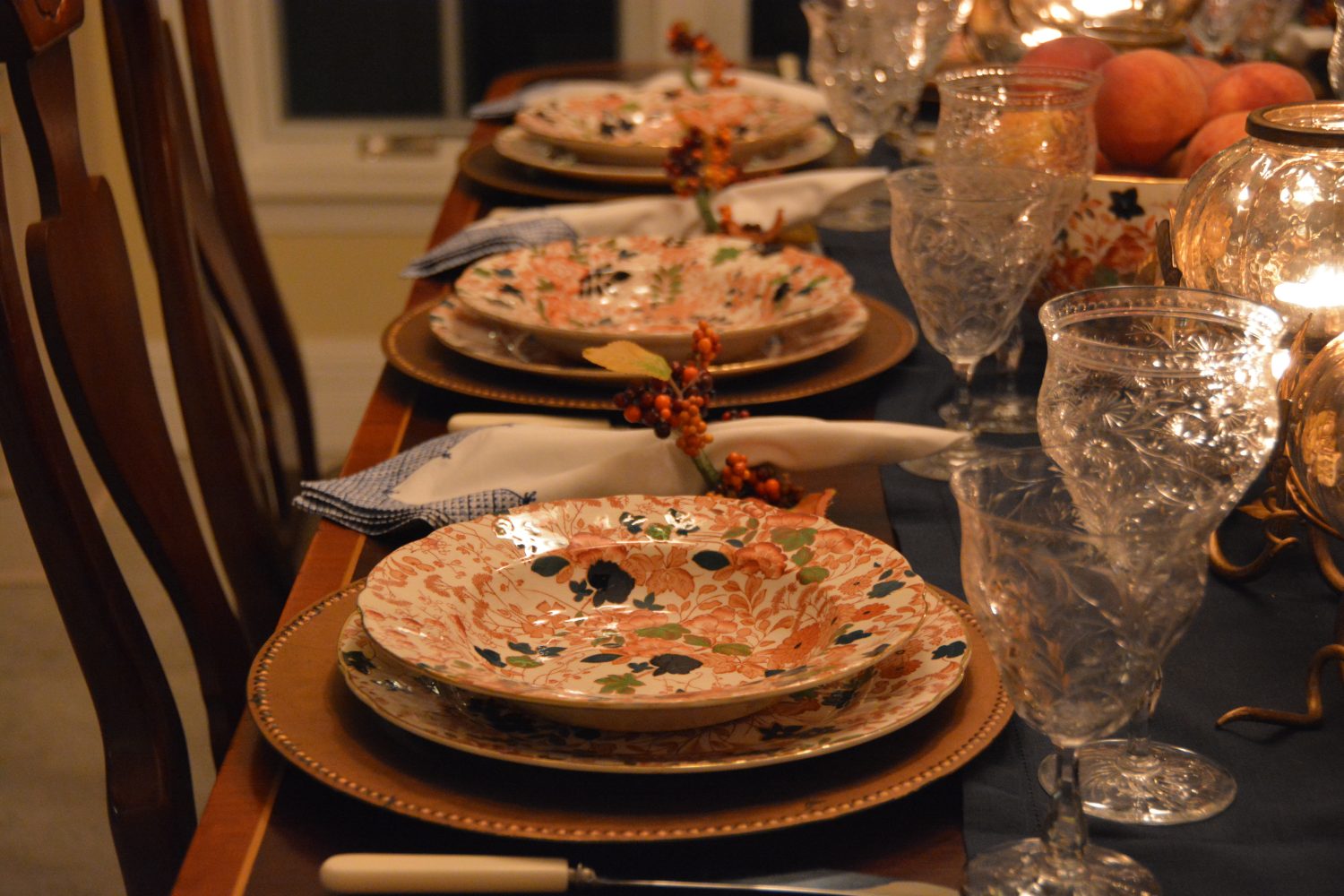 You can’t even tell 🙂

The open salts are from Vintage at Chirp (now Etsy, I believe) . 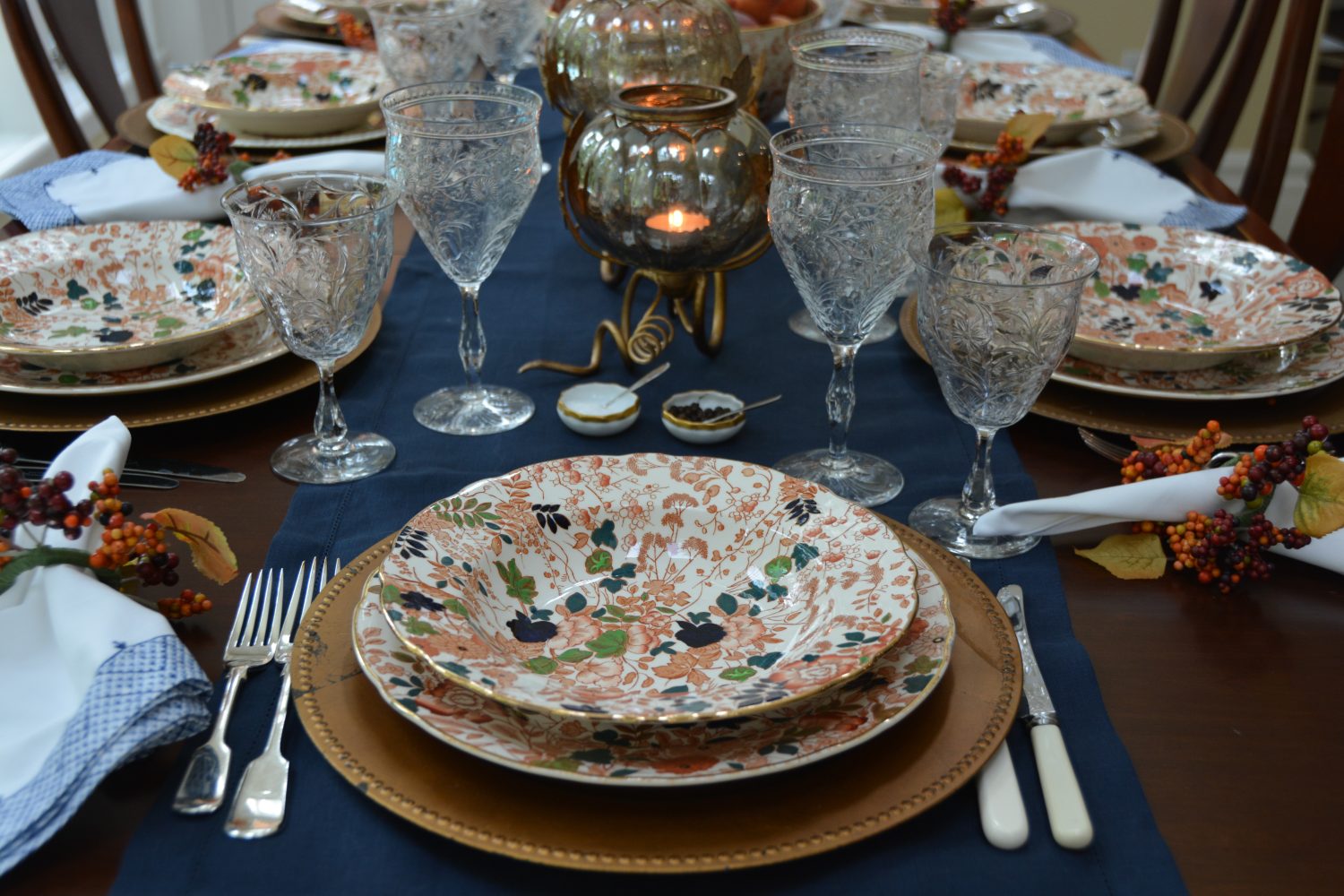 The flatware is part of a silver and bakelite handled vintage canteen that I picked up many years ago from now-defunct Country Dining Room Antiques. 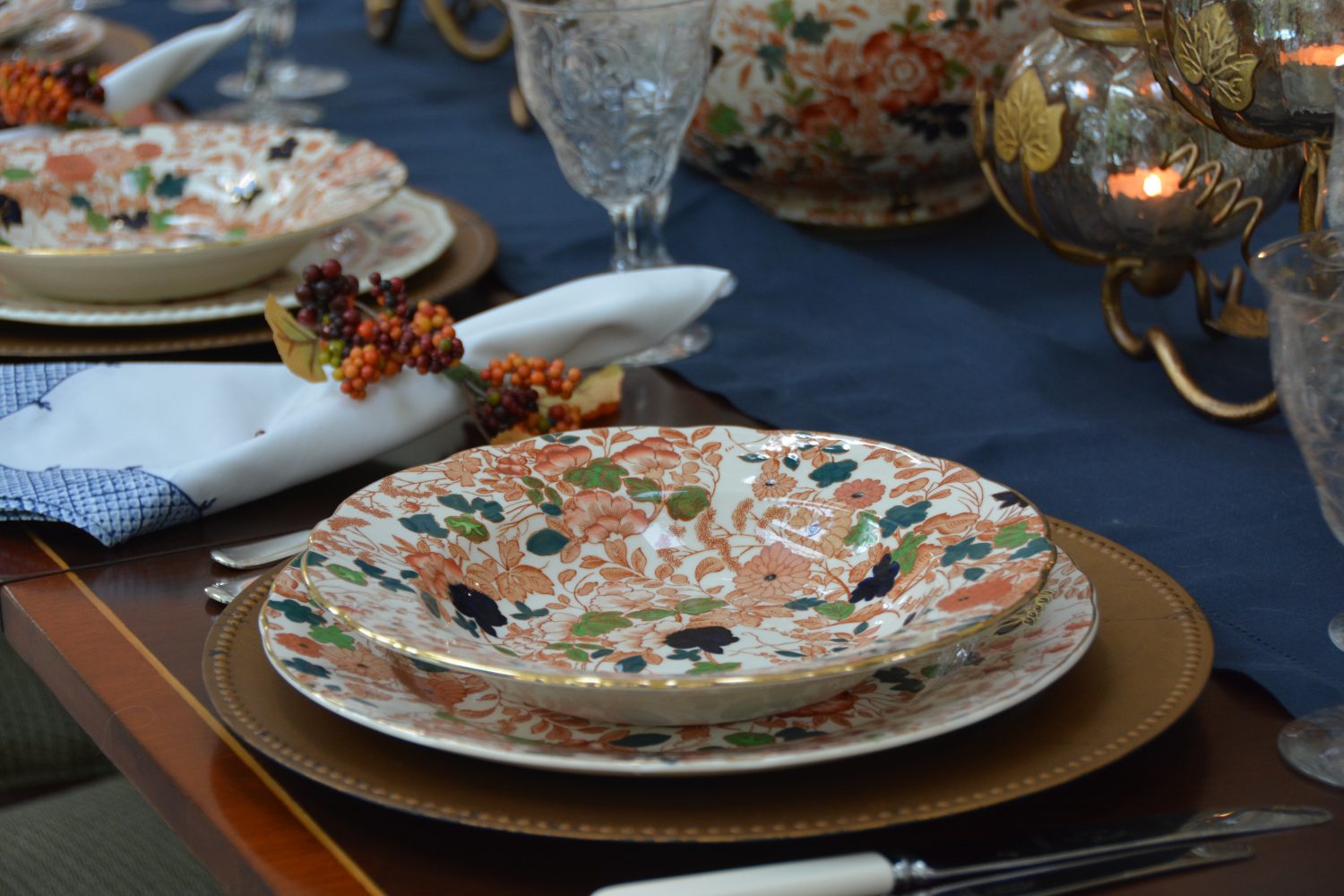 Thanks for joining me on the tour of the table and the Potteries District. Enjoy the week, everyone. 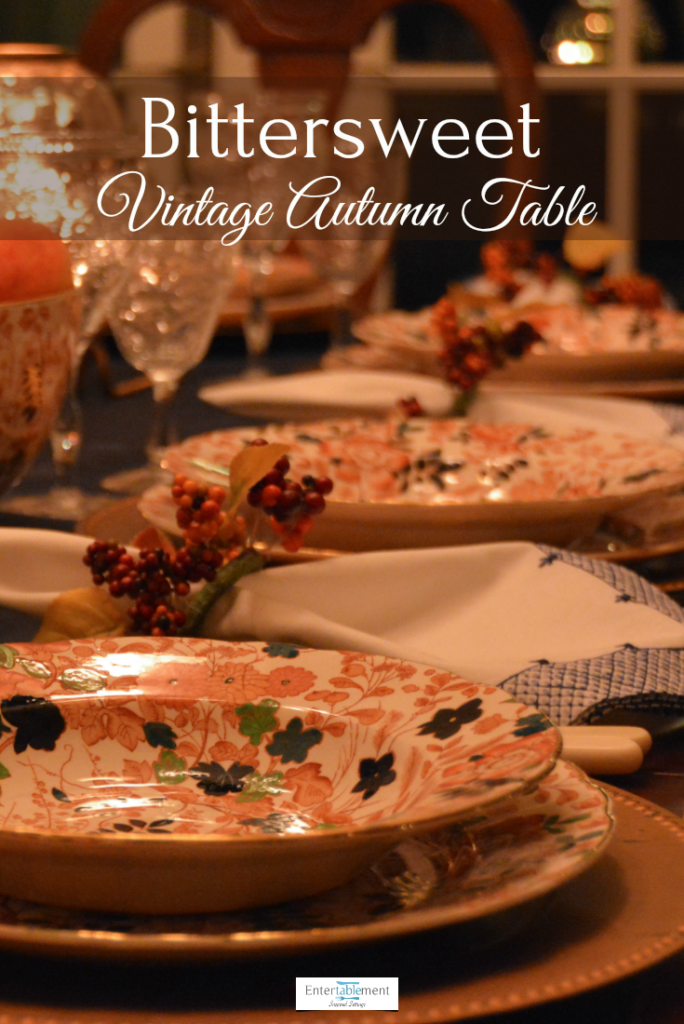