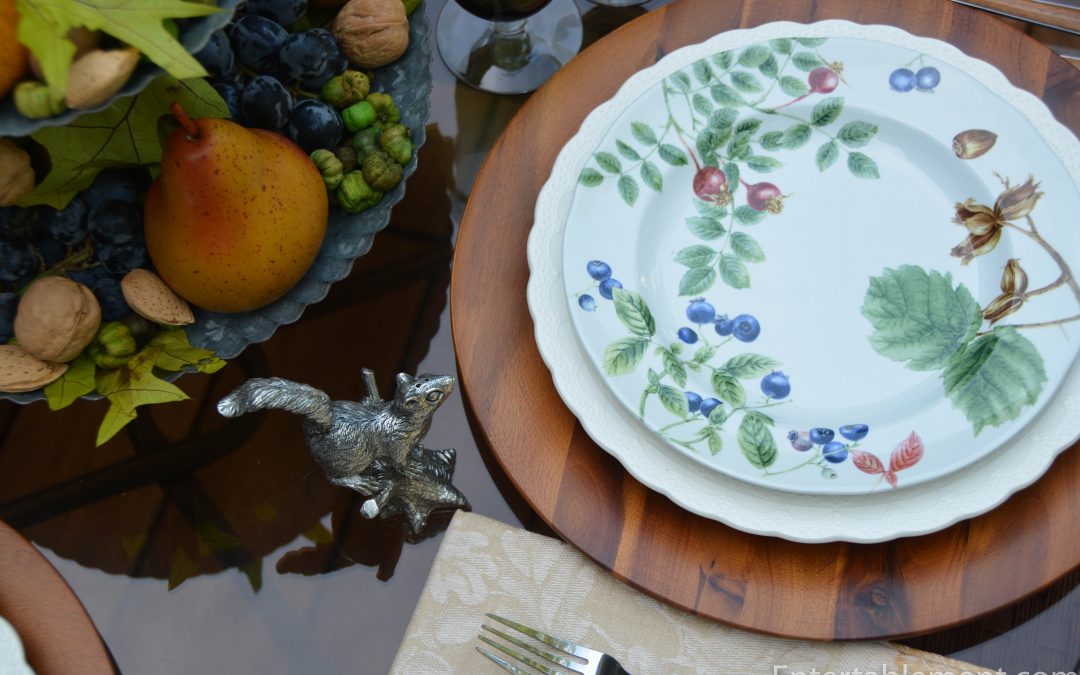 Botanical prints fill my heart with song, particularly when they are exquisitely rendered and occupy a set of mixed salad plates. By Spode no less! 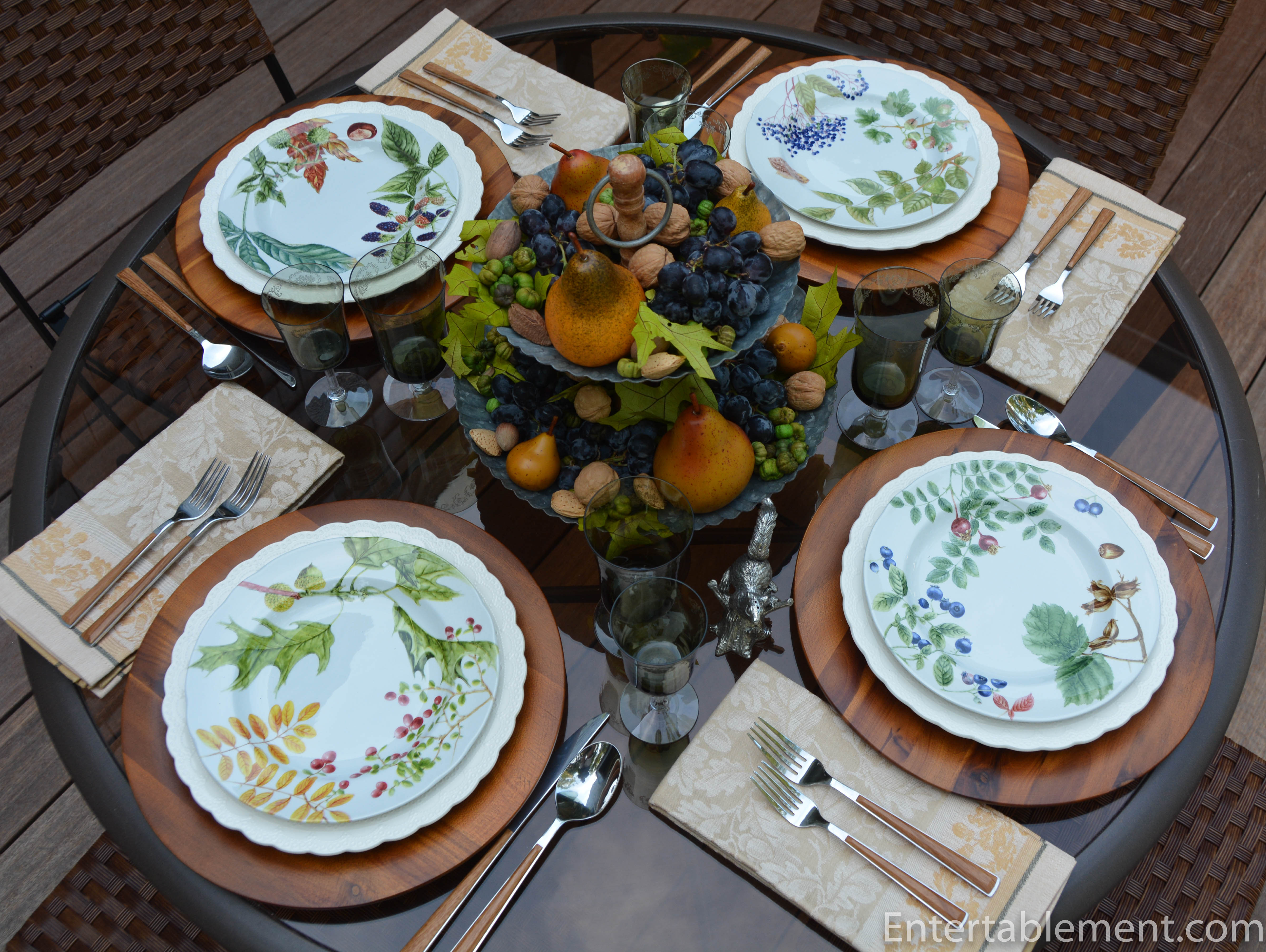 Woodland Harvest by Spode for Williams Sonoma is a relatively recent pattern, produced between 2006 and 2008. The set comprised 9″ salad plates (given the generous size, you could even make the case that they are luncheon plates), soup bowls, a couple of platters and a square serving bowl. And that’s all she wrote! 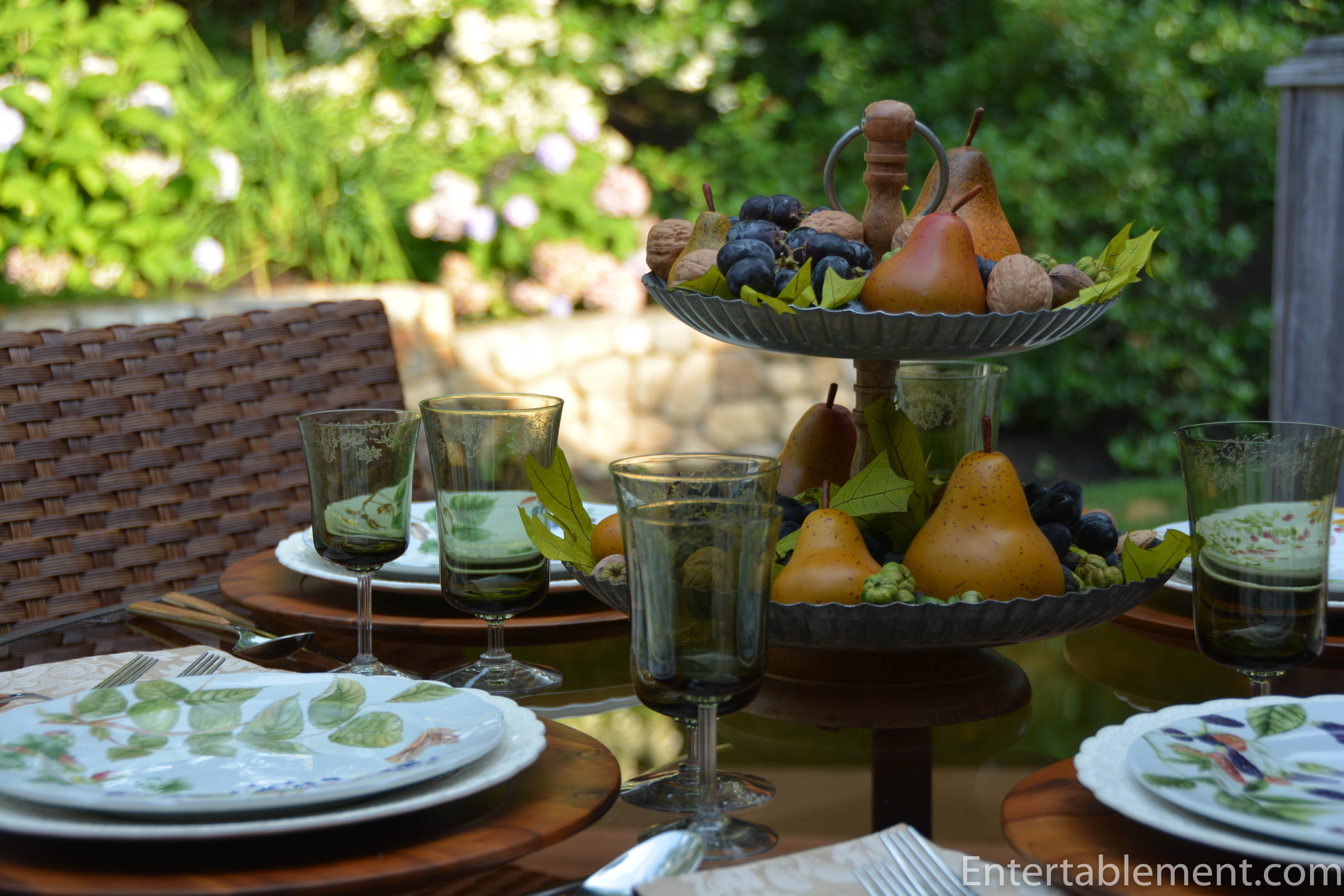 I found these while browsing Replacements one day and was captivated. Replacements didn’t have any at the time, but I was lucky enough to find one set of four plates on eBay. I’ve since tracked down two more sets of four, with three more plates from sister set, English Floral, thrown in for good measure. 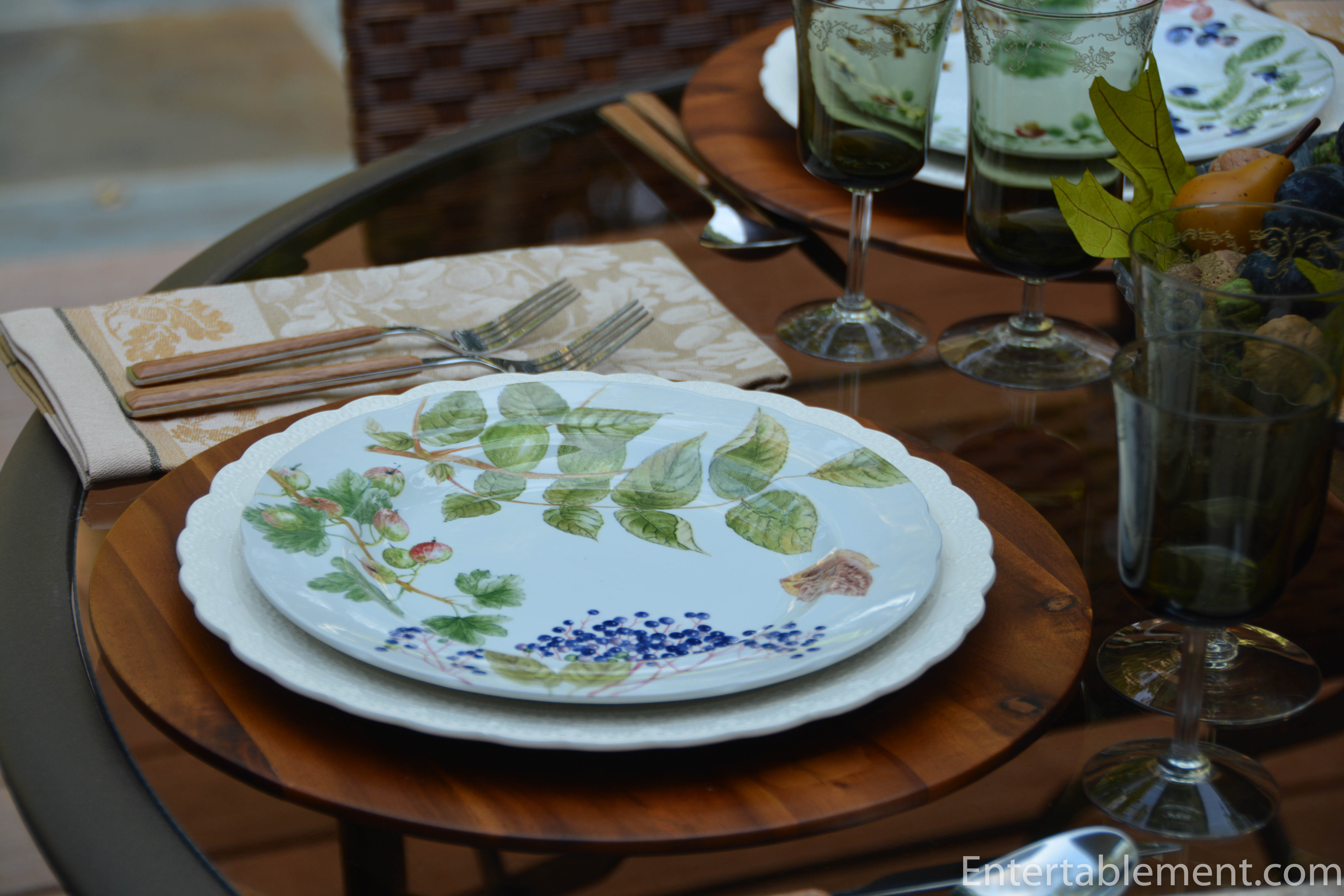 The plates have a harvest theme, with a light touch. They’re a modern rendition of traditional botanical watercolour illustrations, which originally, were scientifically accurate drawings of plants used for catalogues before the age of the camera. 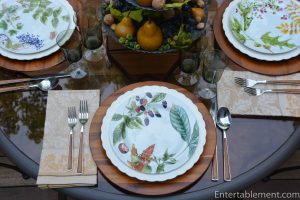 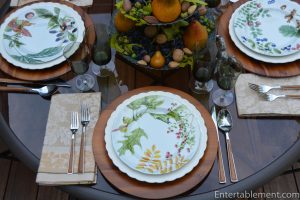 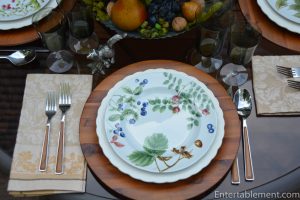 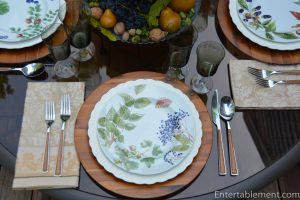 The plates have lots of white space, leaving the colours of the illustrations to appear in stark relief. 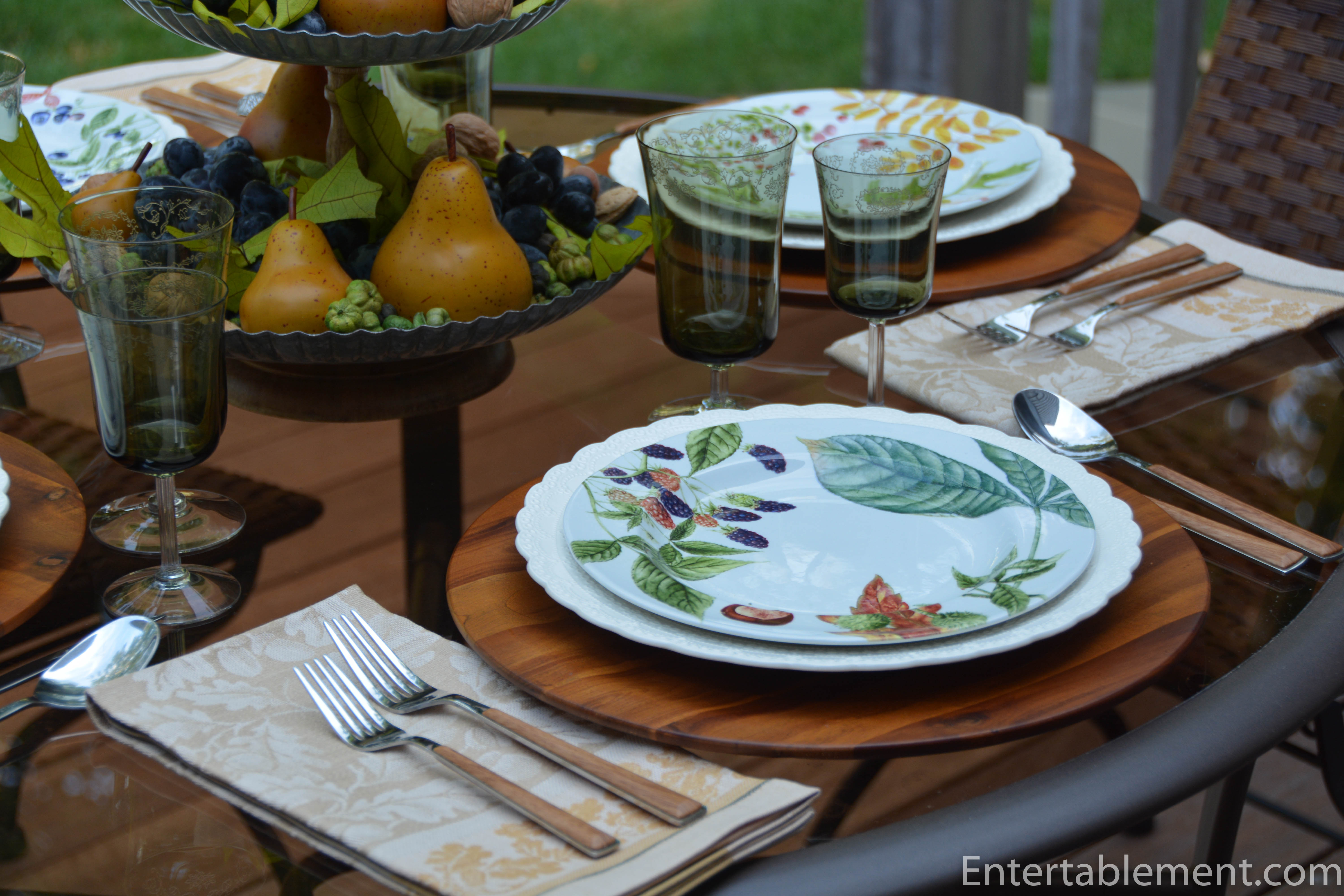 When styling the table, I kept the extra bits to a minimum with a central two-tiered stand of fruits, nuts and leaves, green depression-like glass, jacquard linens and wooden handled cutlery, 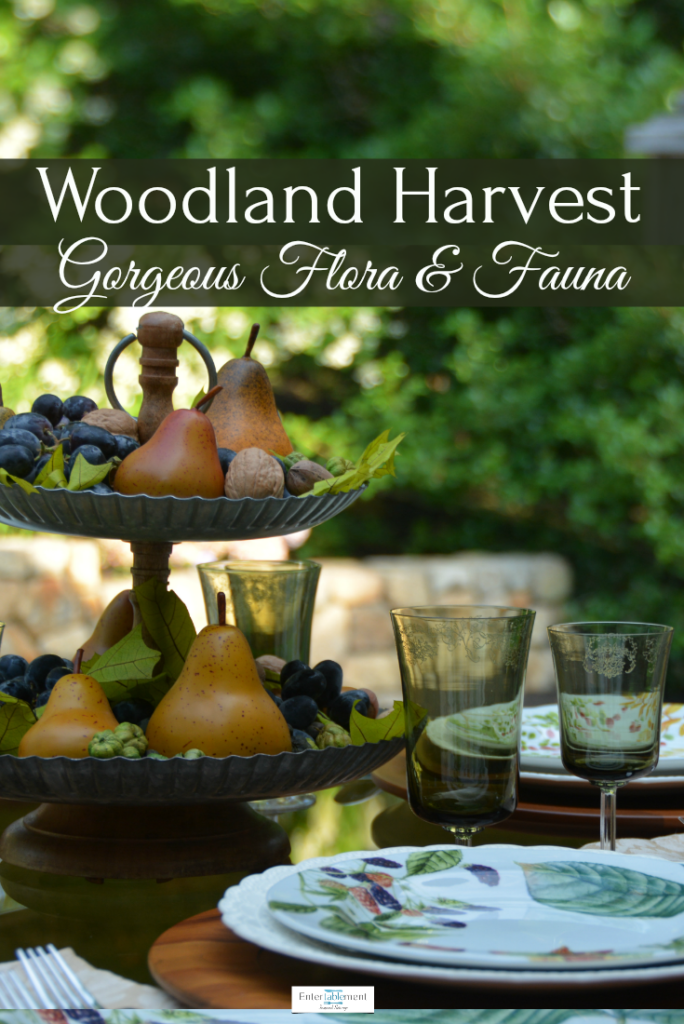 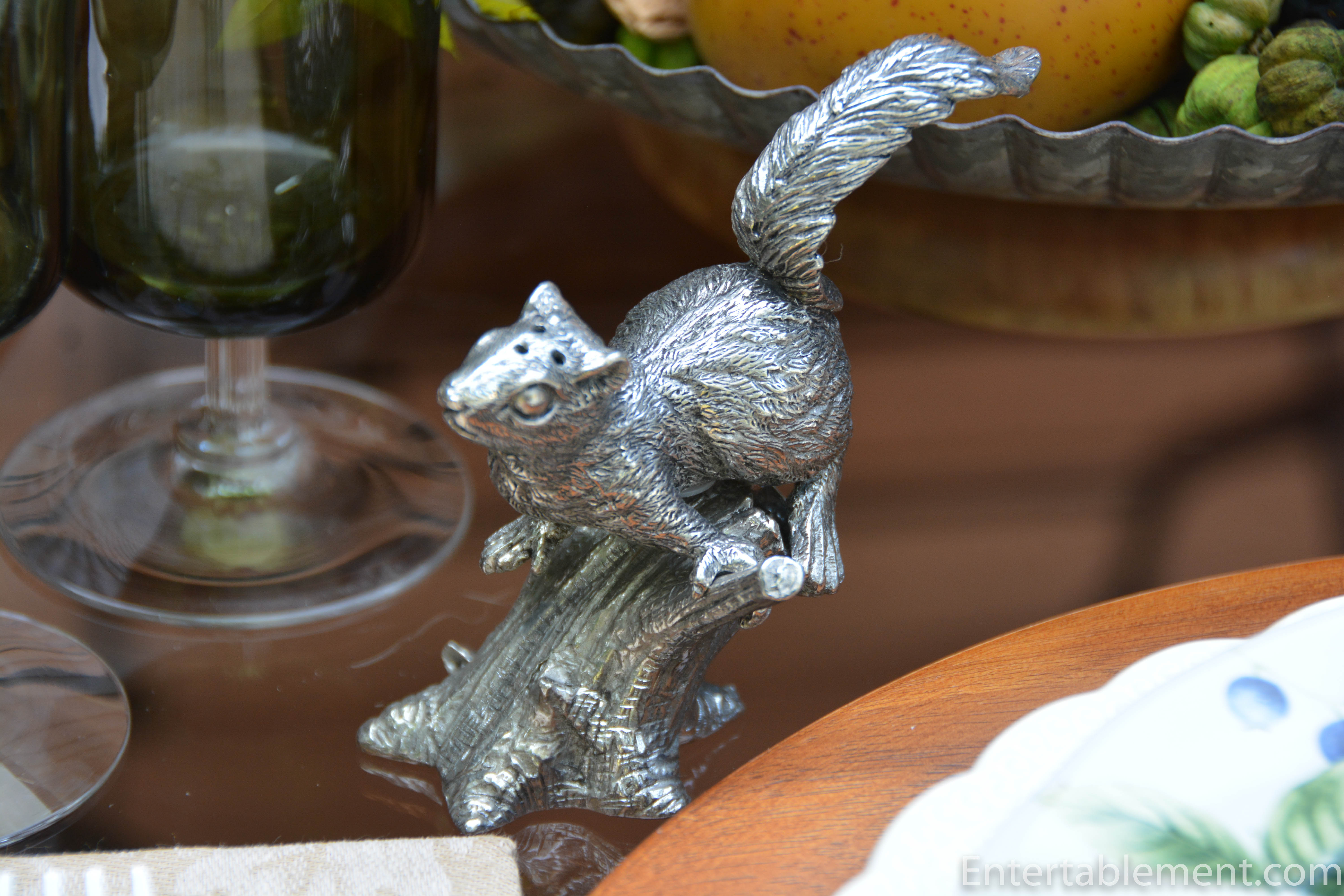 Oh – and a pewter squirrel salt & pepper from Vagabond House. Couldn’t resist him! 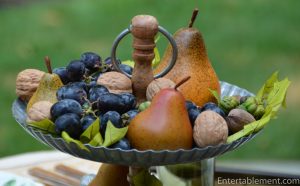 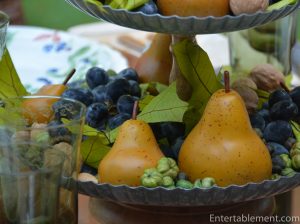 Grapes and green base filler

The galvanized two-tier stand is from Pier 1 last season, and since discontinued. The faux pears are from Pier 1 (they still have green but the gold are no longer available); the nuts are real from Nuts.com; the leaves are from Save-on-Crafts. The grapes are real, courtesy of Stop’n’Shop. 🙂 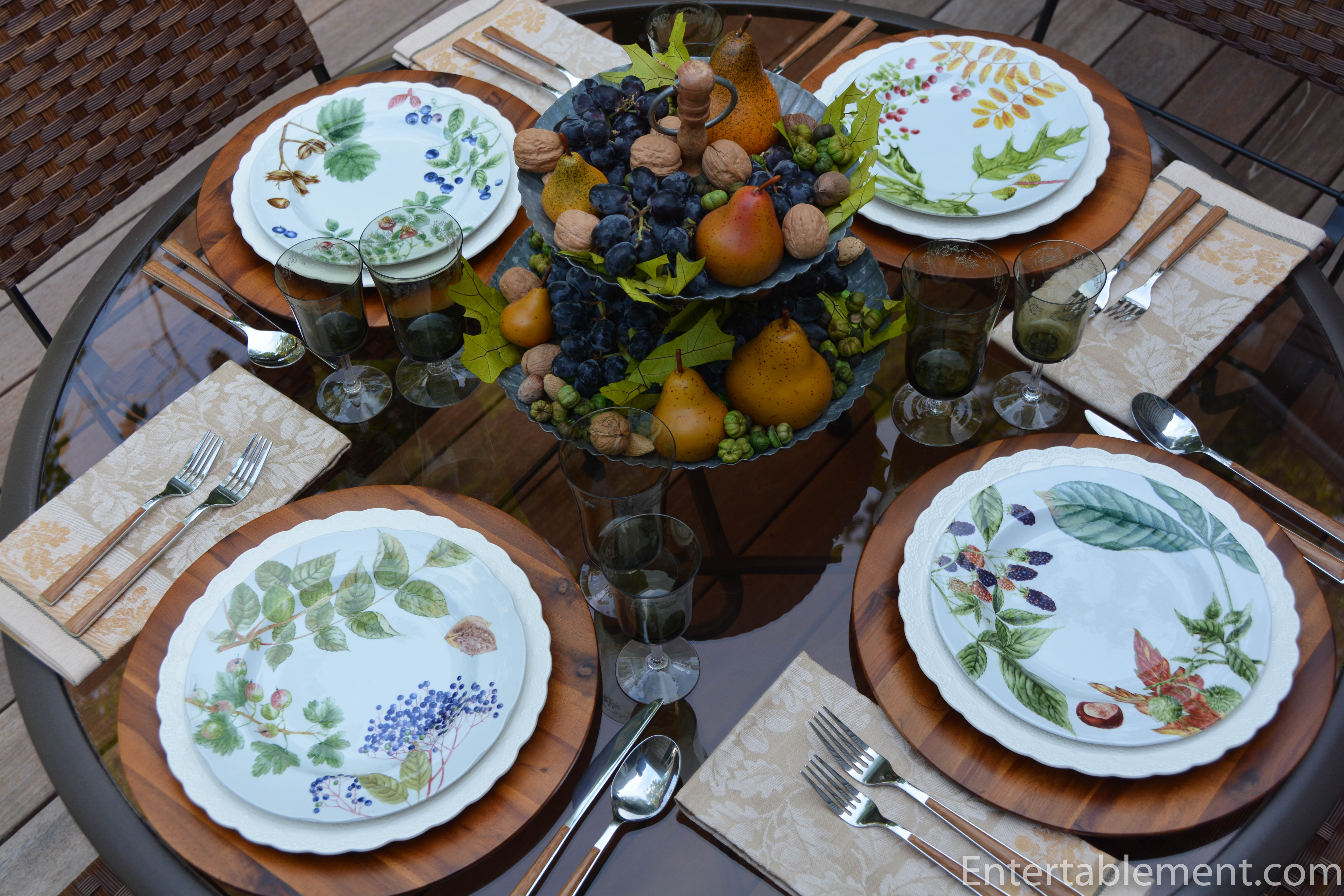 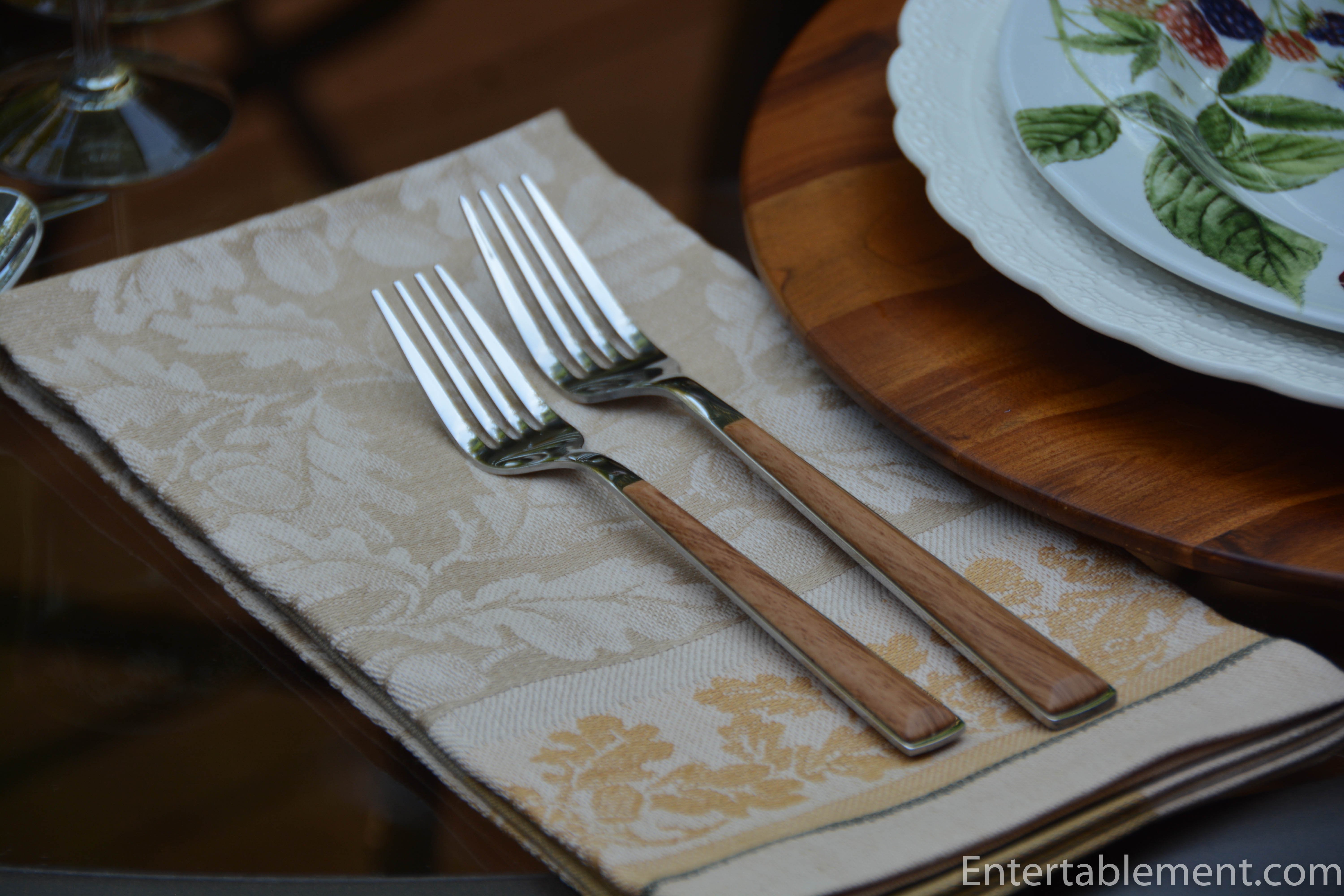 The gold Acorn Harvest Jacquard napkins are from Williams Sonoma this season and the Sawyer flatware is from World Market. The wooden chargers are from Amazon. 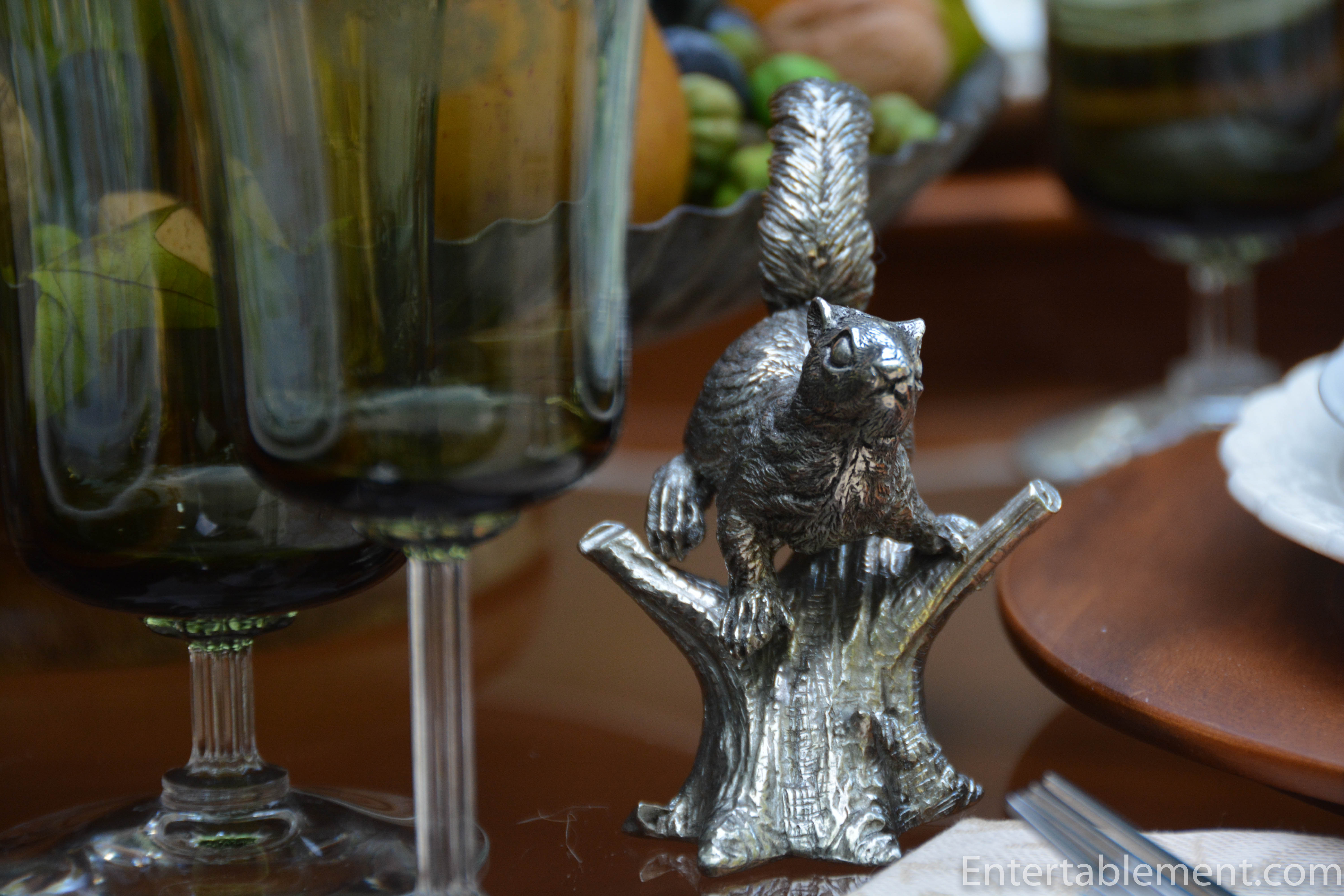 Here he is again. You can almost hear him saying “What have you got for me? Can I have some of those nuts on the table?” 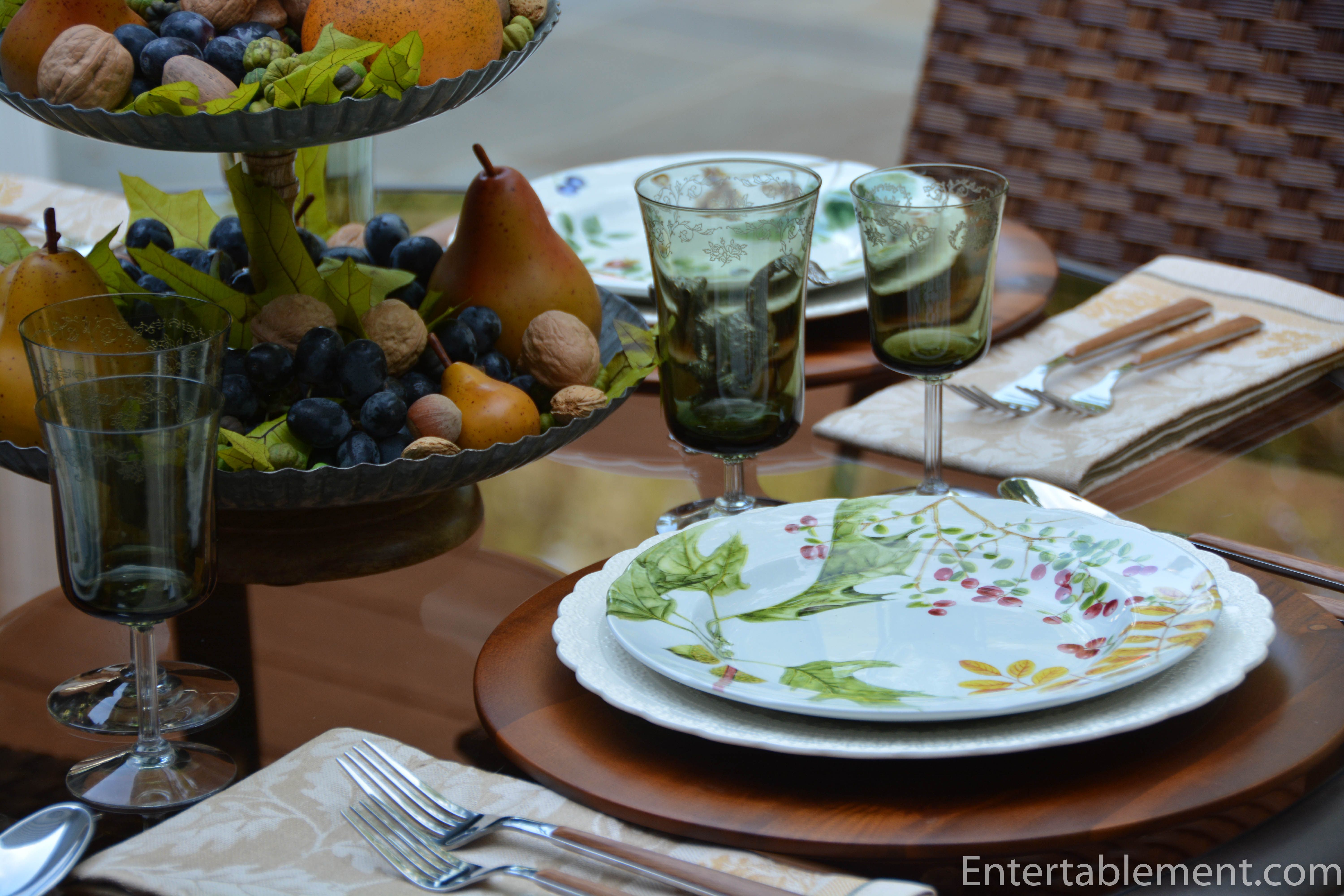 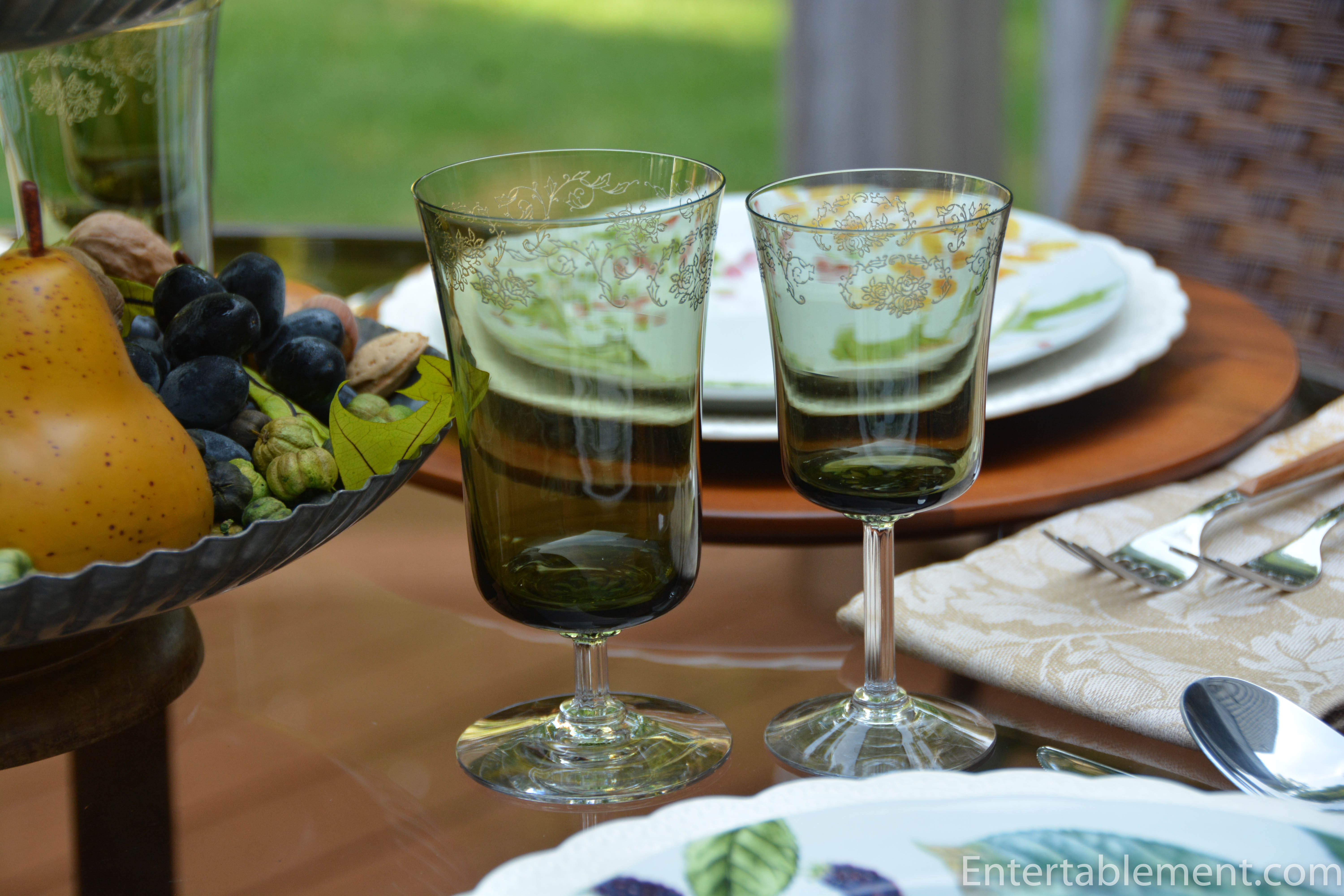 The glasses are iced tea and water goblets in Cameo Green by Fostoria.  While they feature some of the design elements of Depression glass (needle etching on fairly fine glass), they’re actually quite modern – from the 1970s, and available from Replacements. 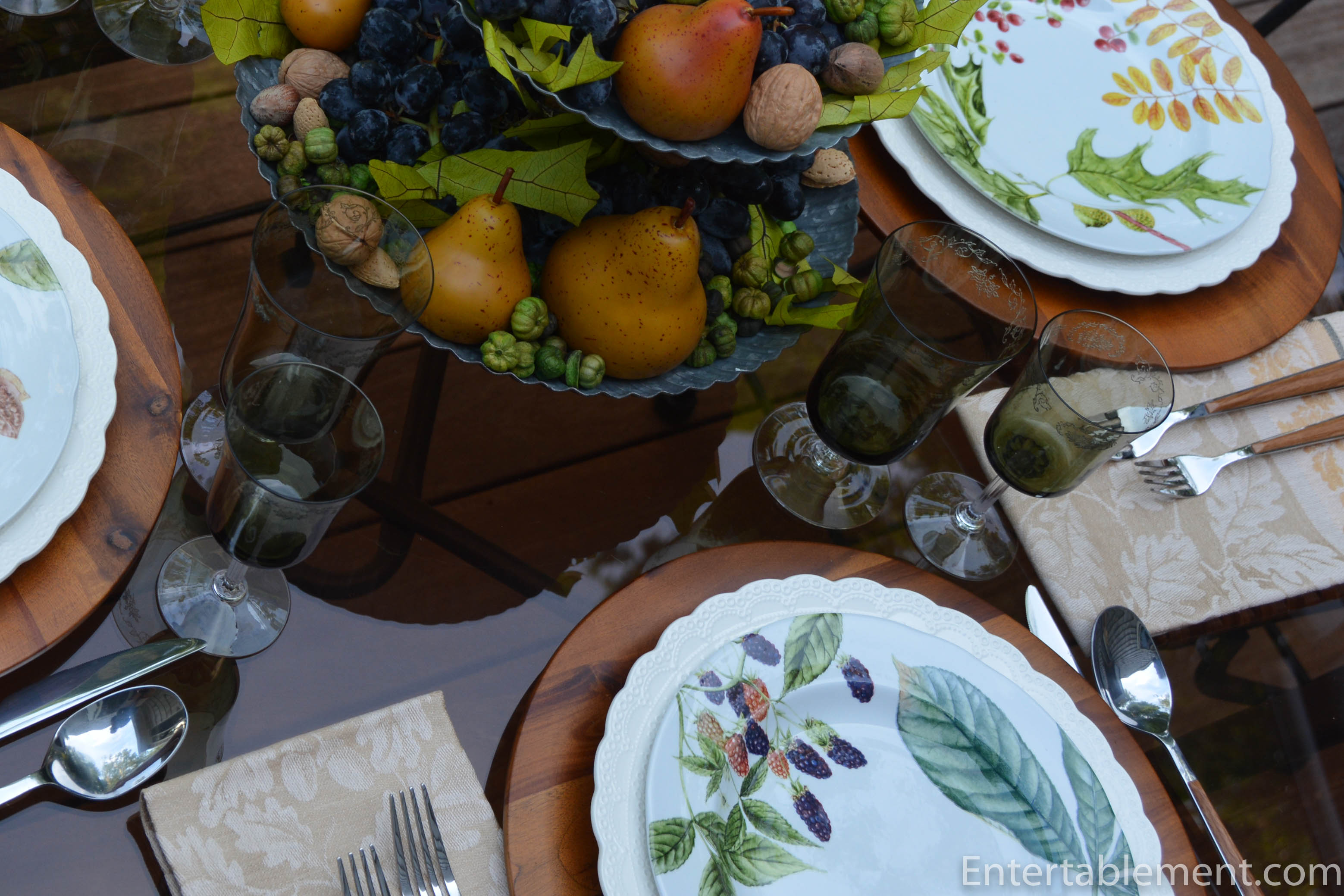 Botanicals have a long history in adorning tableware, and for good reason – they’re timeless. These particular plates have a clean aesthetic that is very pleasing to the eye. And they’re dishwasher safe, too. A bonus! 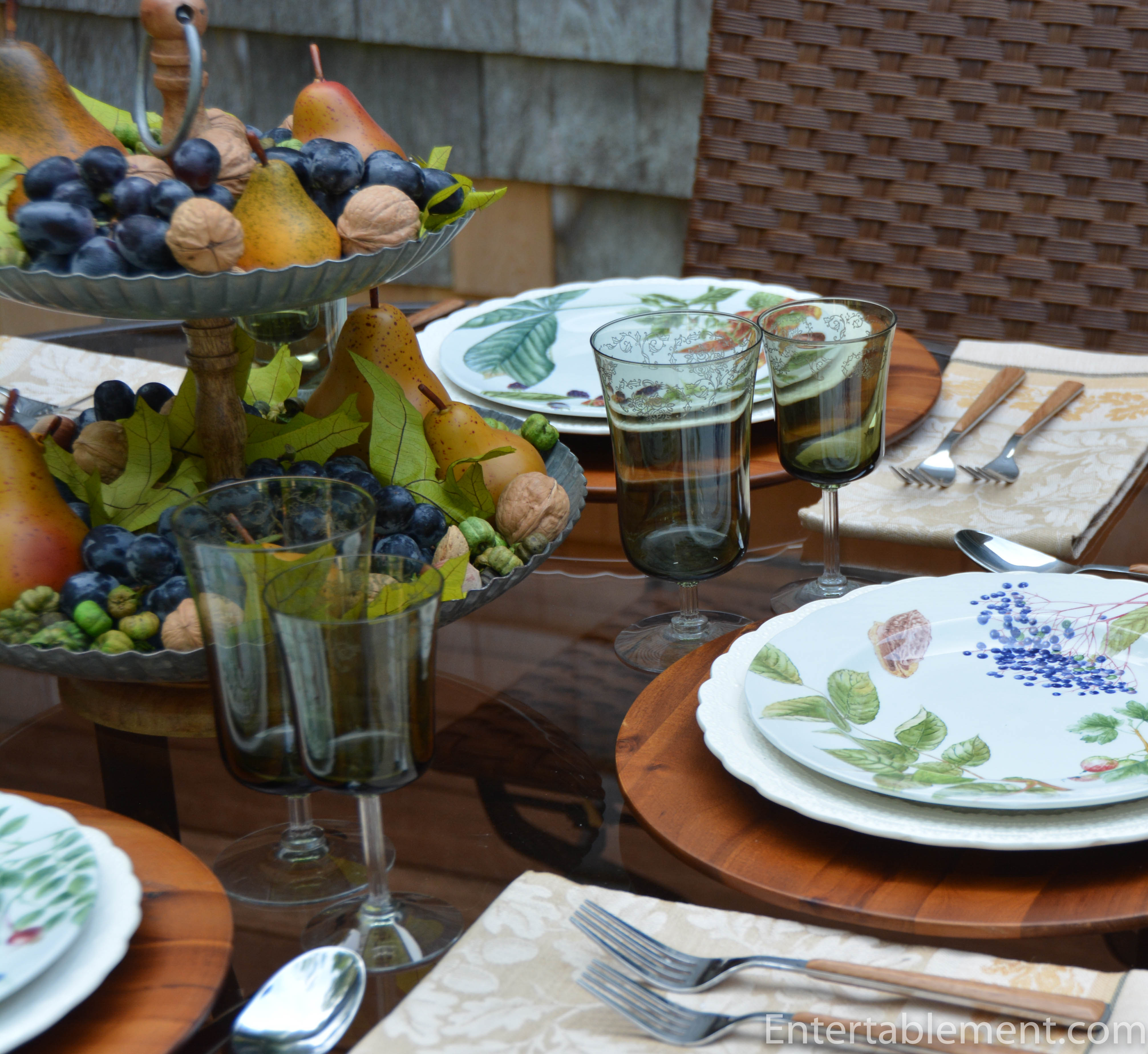 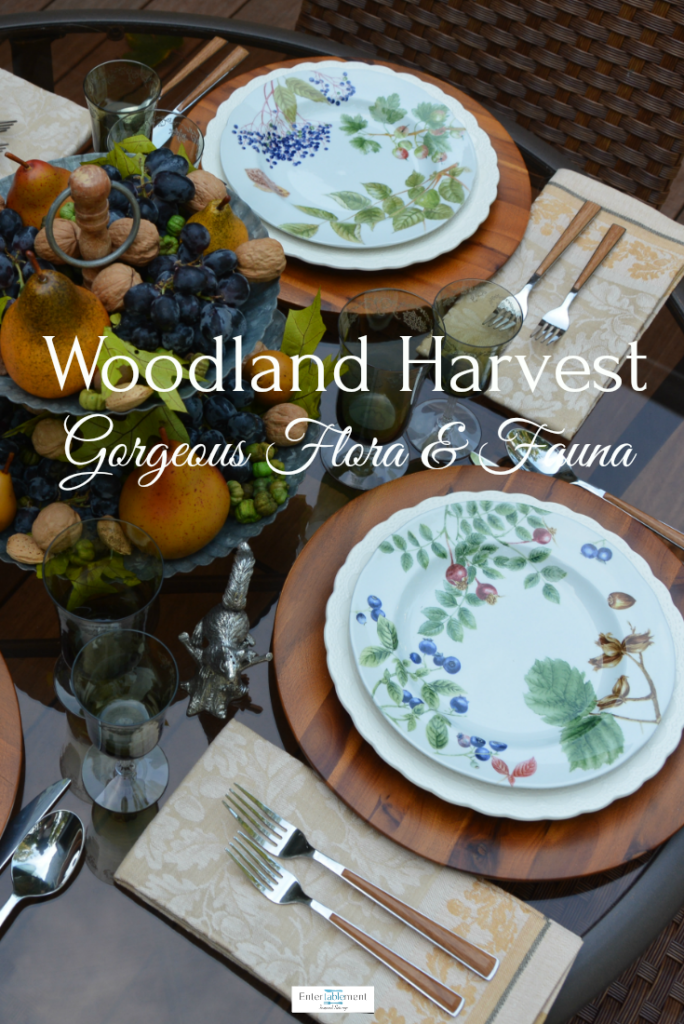