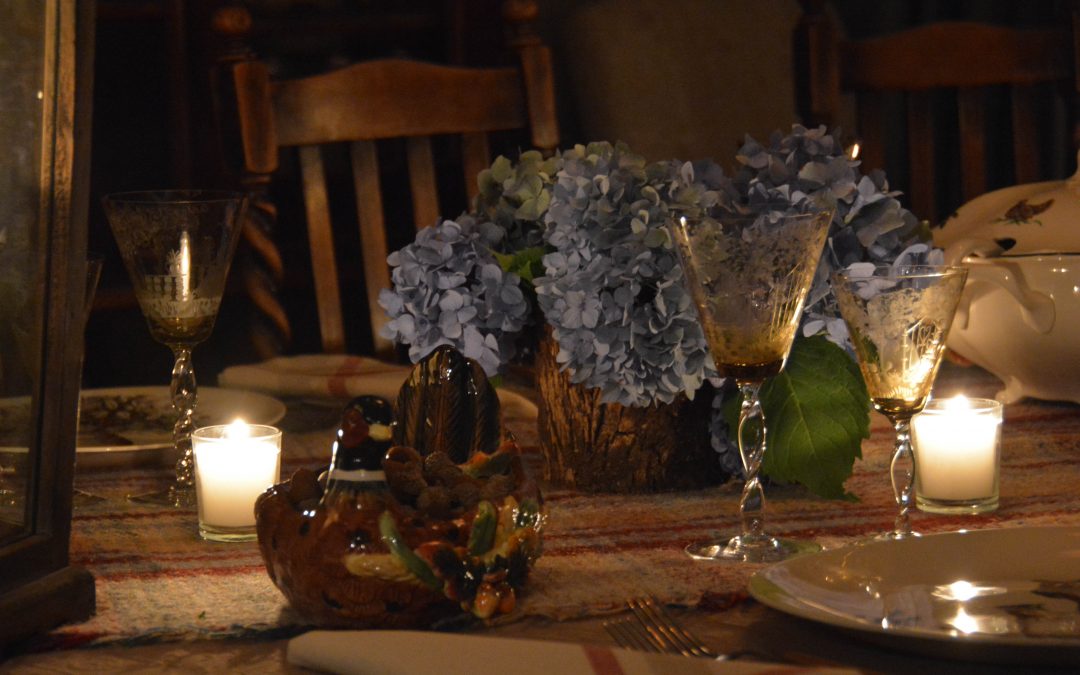 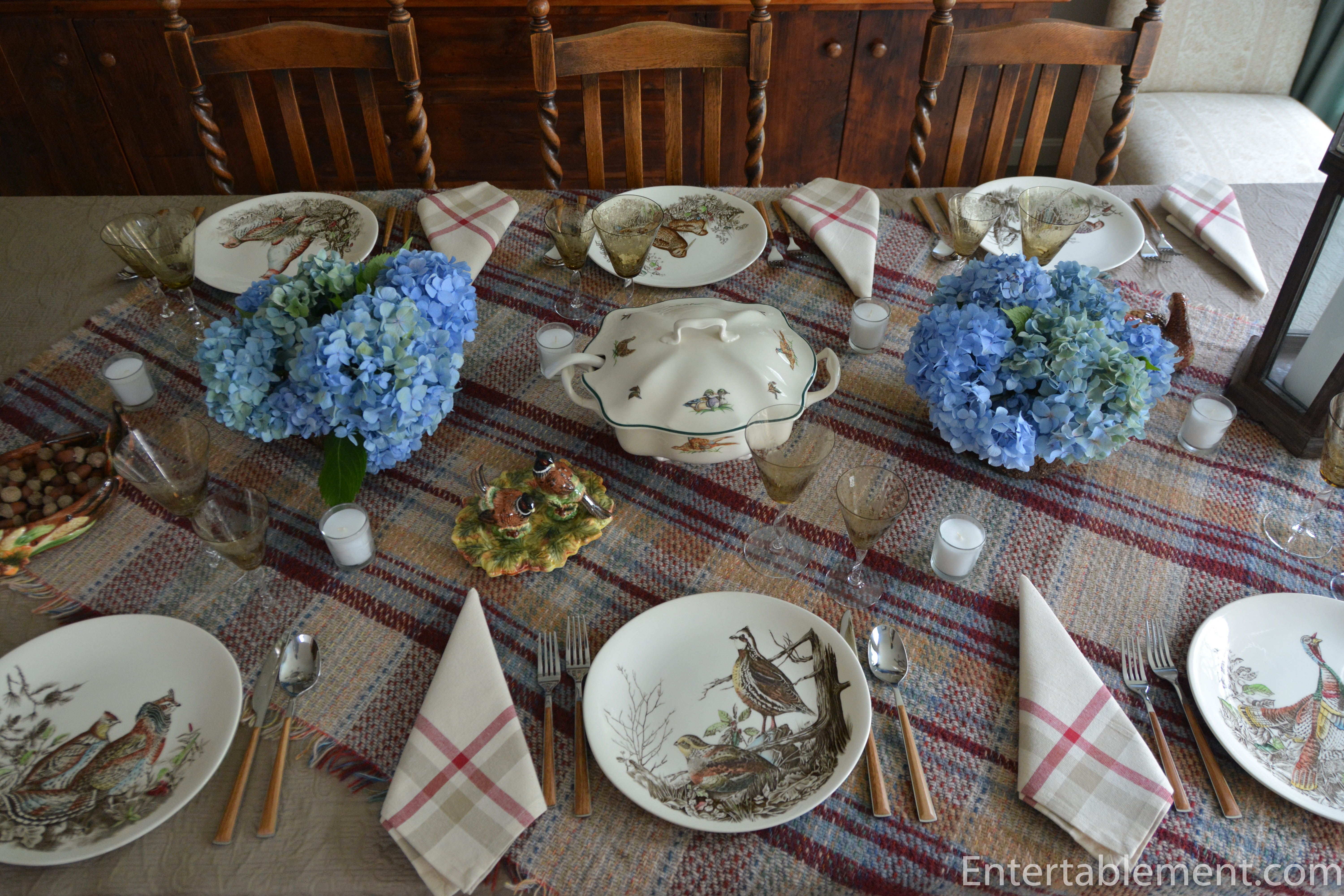 Johnson Brothers produced the pattern between 1953 and 1976, and typical of specialty sets, Game Birds features a number of different feathered friends, united by a common theme. There are dinner, luncheon and salad plates; I confined myself to a set of six of the 11 1/8″ oval dinner plates. 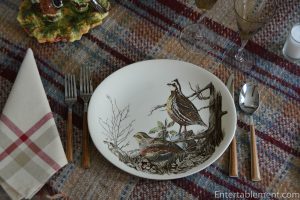 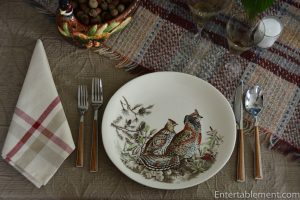 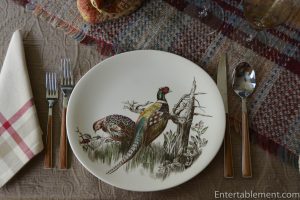 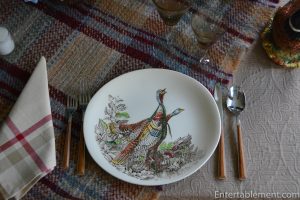 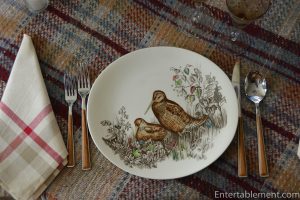 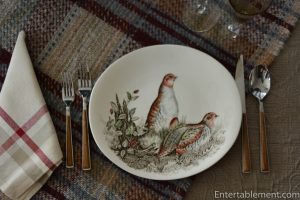 It was hard to pick a favourite bird! 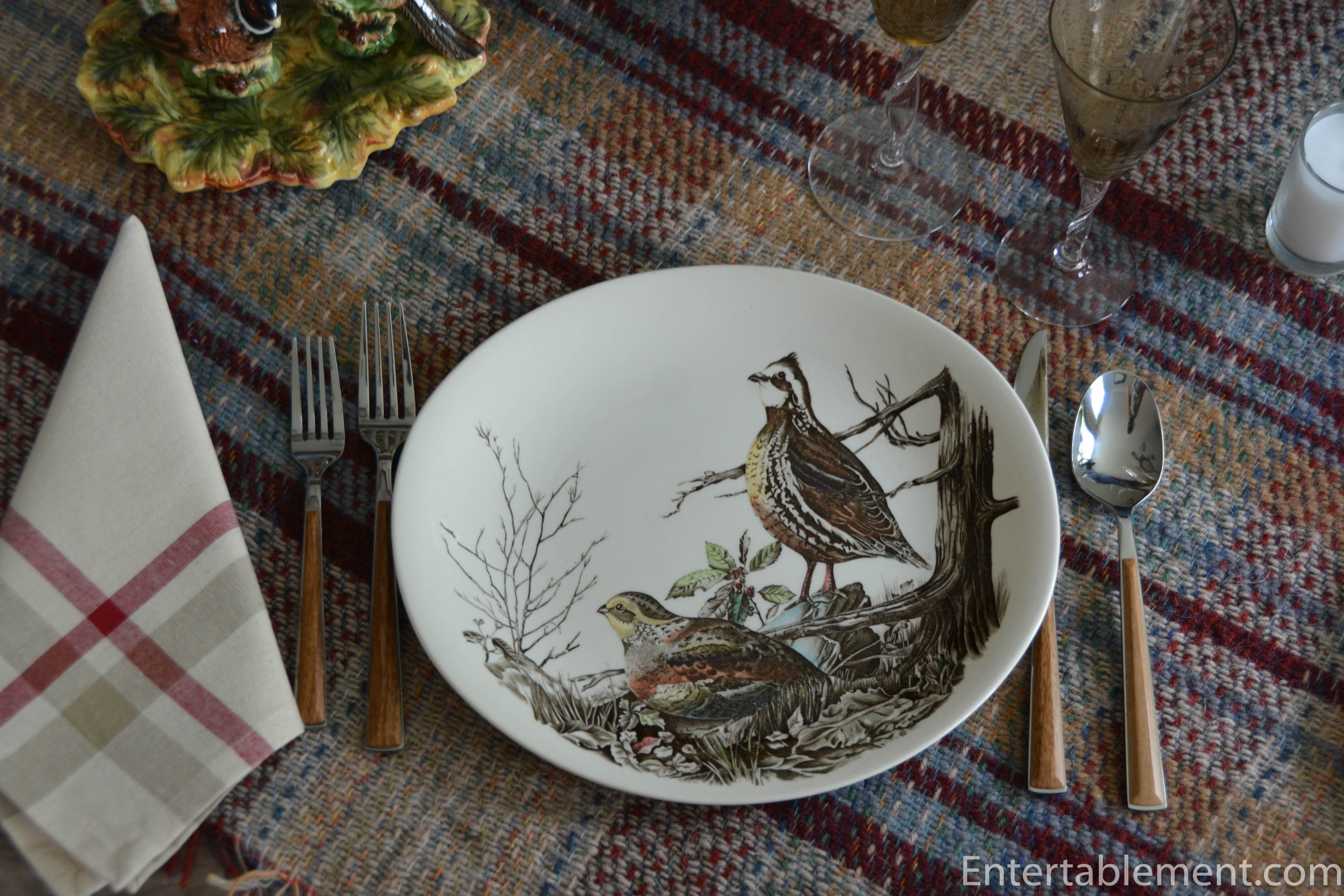 I am especially captivated by the look of harassed inquiry on the face of the “standing” quail. It’s hysterical! 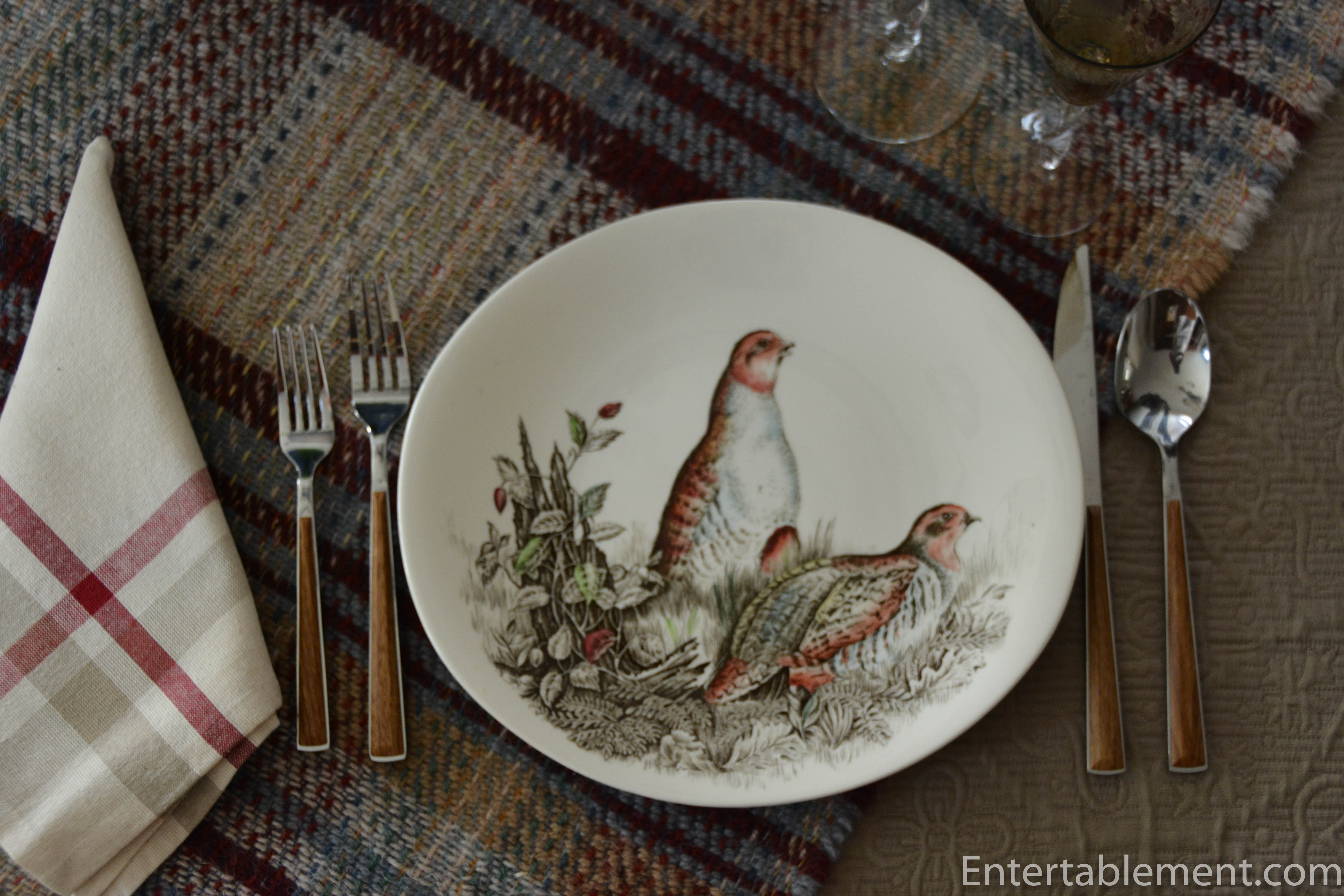 The two partridges peering over the horizon are pretty funny, too. 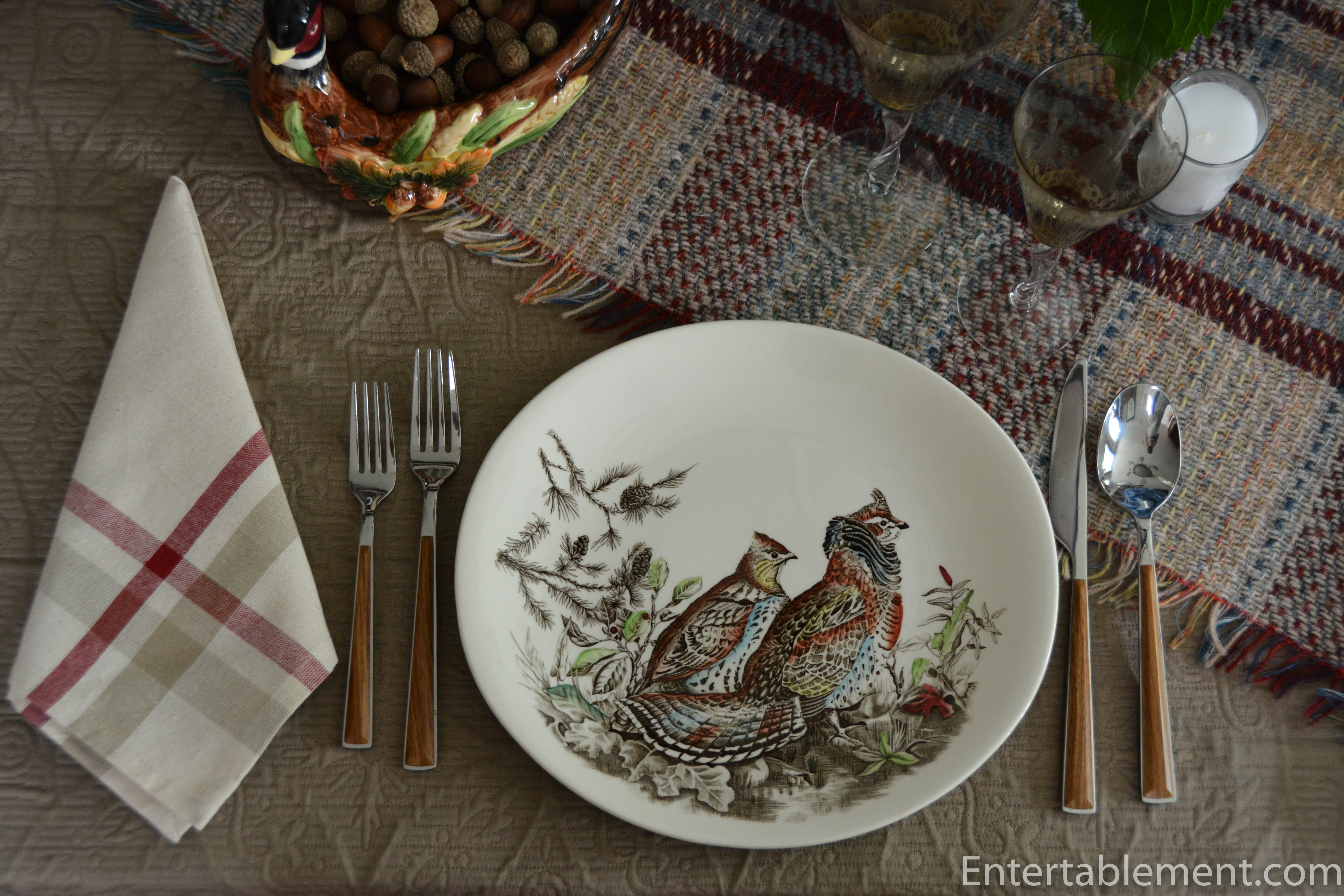 The ruffled grouse  on the right looks like he’s wearing a scarf and overcoat. I guess that’s what the “ruffle” refers to. 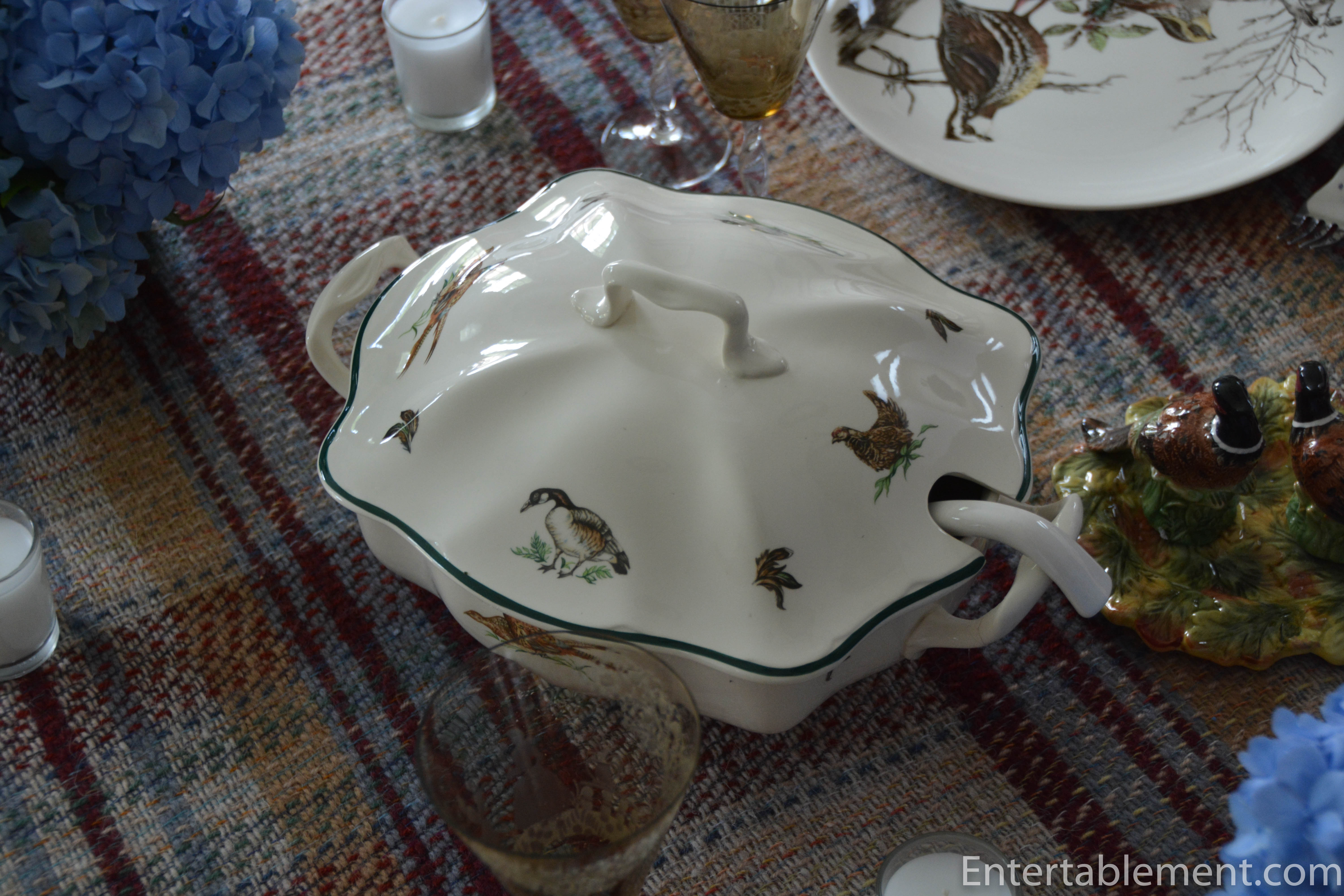 The pattern plays well with others, too. The tureen is Brookshire, also by Johnson Brothers. I had a lot of fun putting this table together with all the birds, tartans and heathery bits. 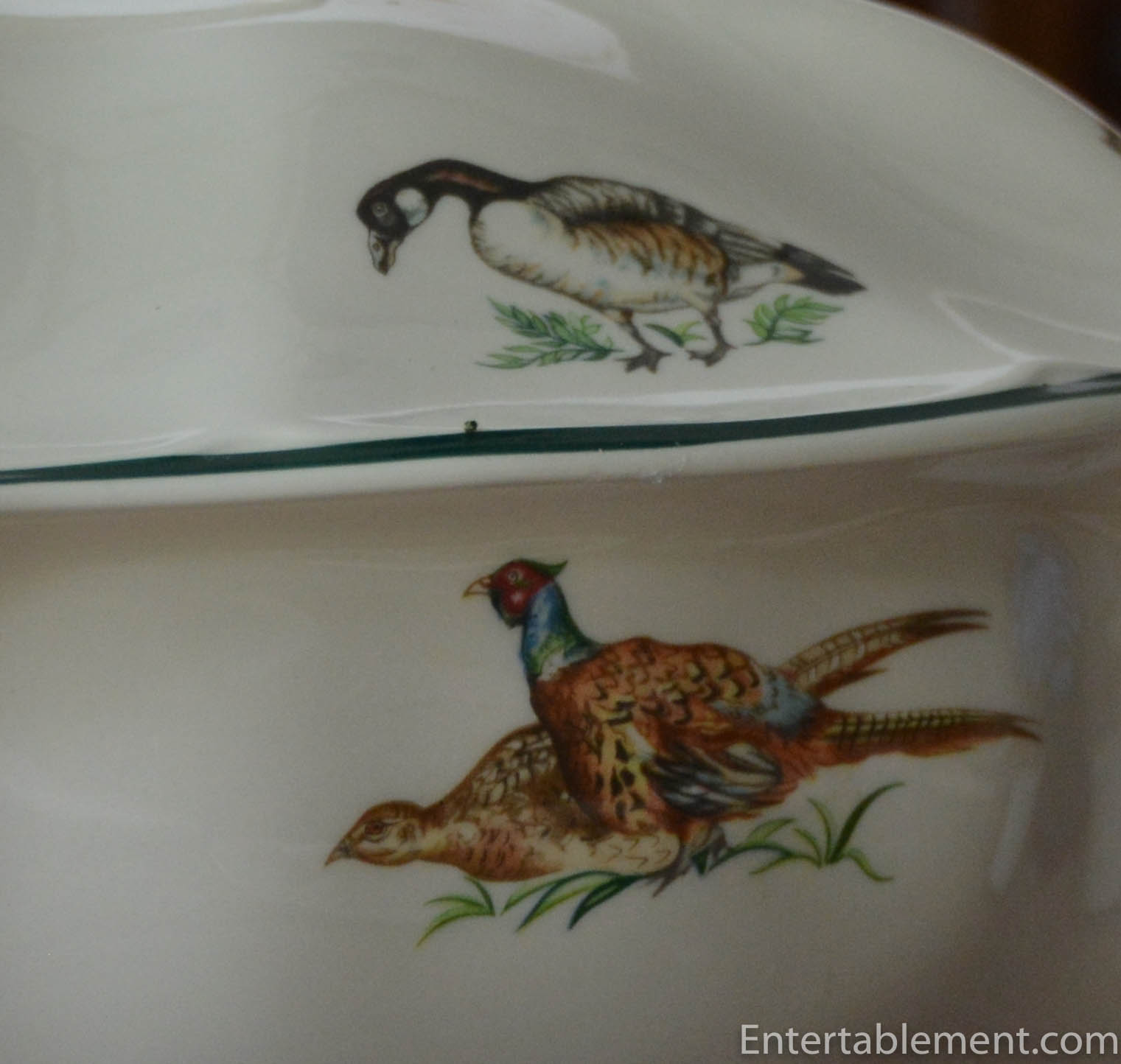 The birds on Brookshire are nicely depicted, and the deep green border continues the autumn colour scheme. 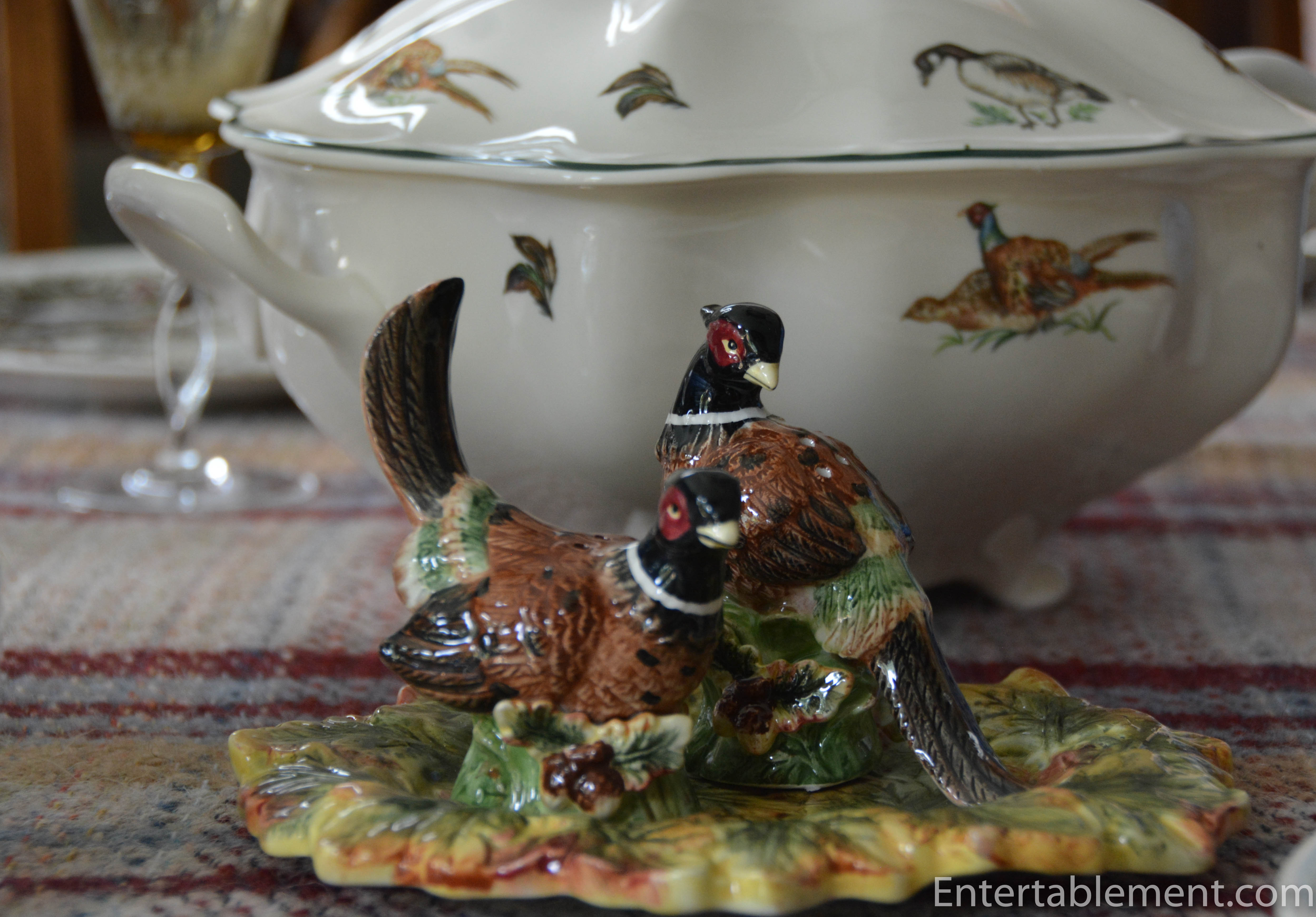 The pheasant salt & pepper shakers are by Spode, and are part of their Harvest Figural Collection. The series was discontinued in 2014, but pieces are still available on Amazon, and, of course, on eBay and through Replacements. 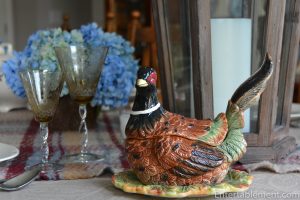 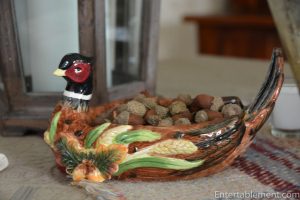 Who could resist those little pheasant faces? The guy on the left is described as a gravy boat, but functions well as a small tureen. I filled the candy dish with small acorns, and they look quite at home nestled there. 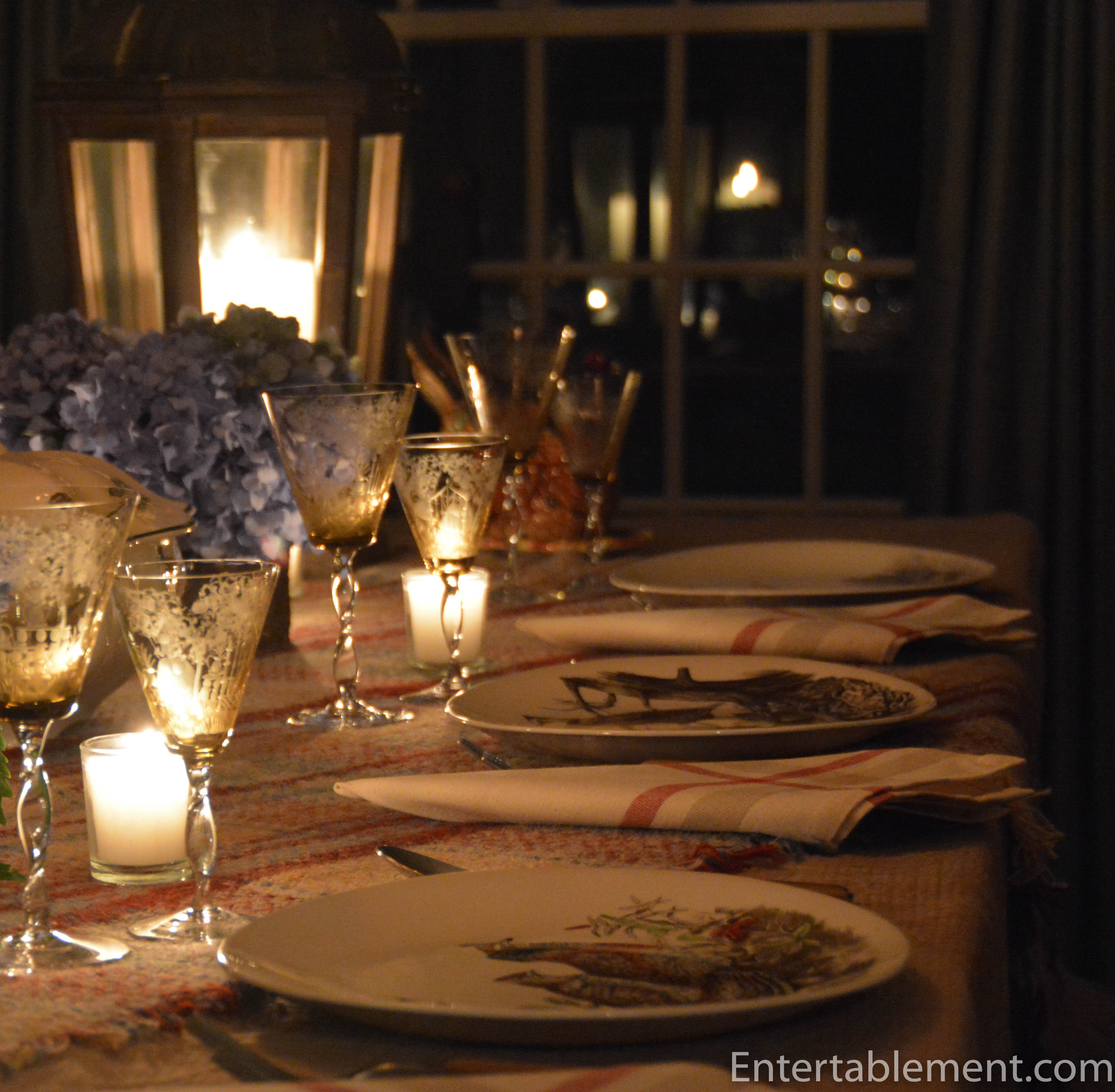 The table really glowed at night. I used smokey glasses of Bohemian Crystal purchased a while ago from Laureleaf Farms. They were “one offs”. I’d love to expand the set, as I have only five of the large and seven of the small glasses, but I’ve never seen anything like them anywhere else. 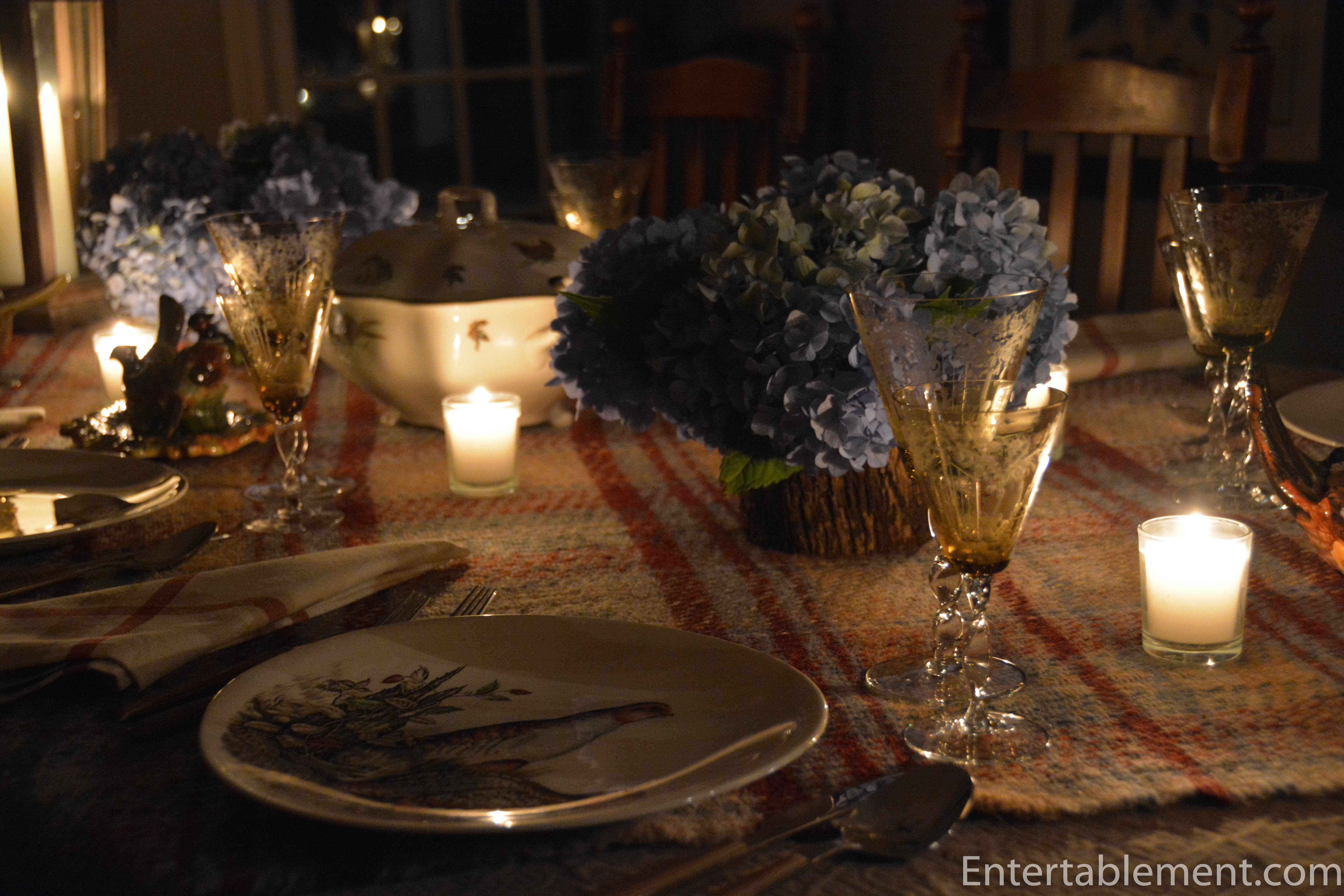 The blue hydrangea in bark covered vases echoed the blue in the tartan wool blanket (which normally resides in my Mini, at the ready for passenger naps or impromptu picnics). Glenn got me the blanket from the National Trust in England on one of our jaunts. It’s made from recycled wool, and while I can’t say it’s the softest of blankets (or rugs, as the Brits call them), it’s very warm and extremely durable. I’ve laid it over a metalasse bedspread that I picked up at Bed, Bath & Beyond, and repurposed to function as a tablecloth. 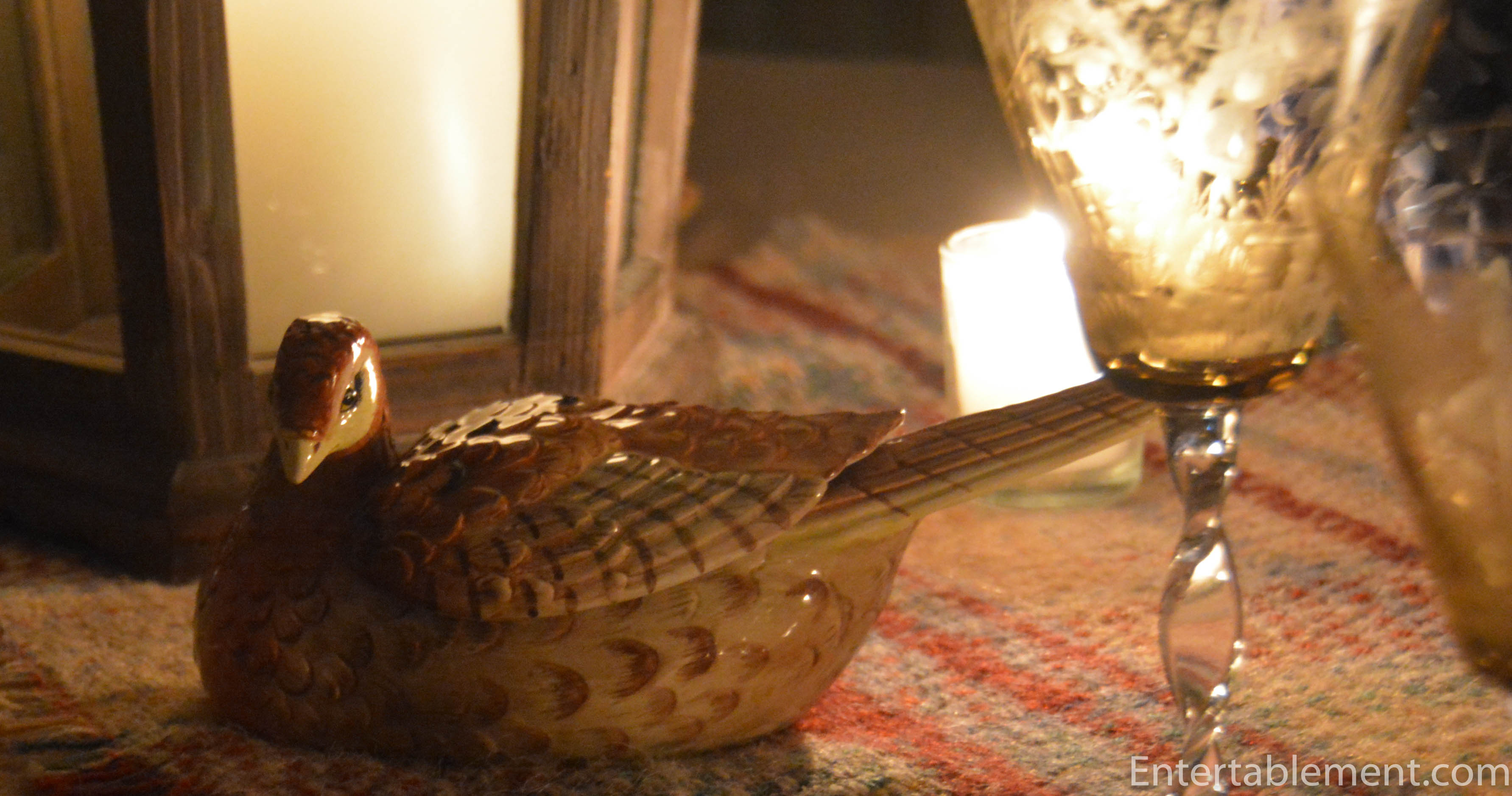 This little gal is a female pheasant-shaped trinket box from the series by Fitz and Floyd, and was an eBay find. According to Replacements, (source of the picture below) they made half a dozen different shapes. 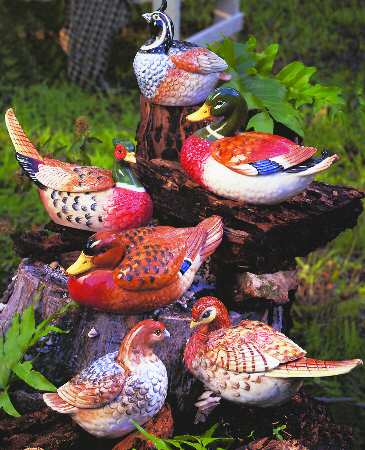 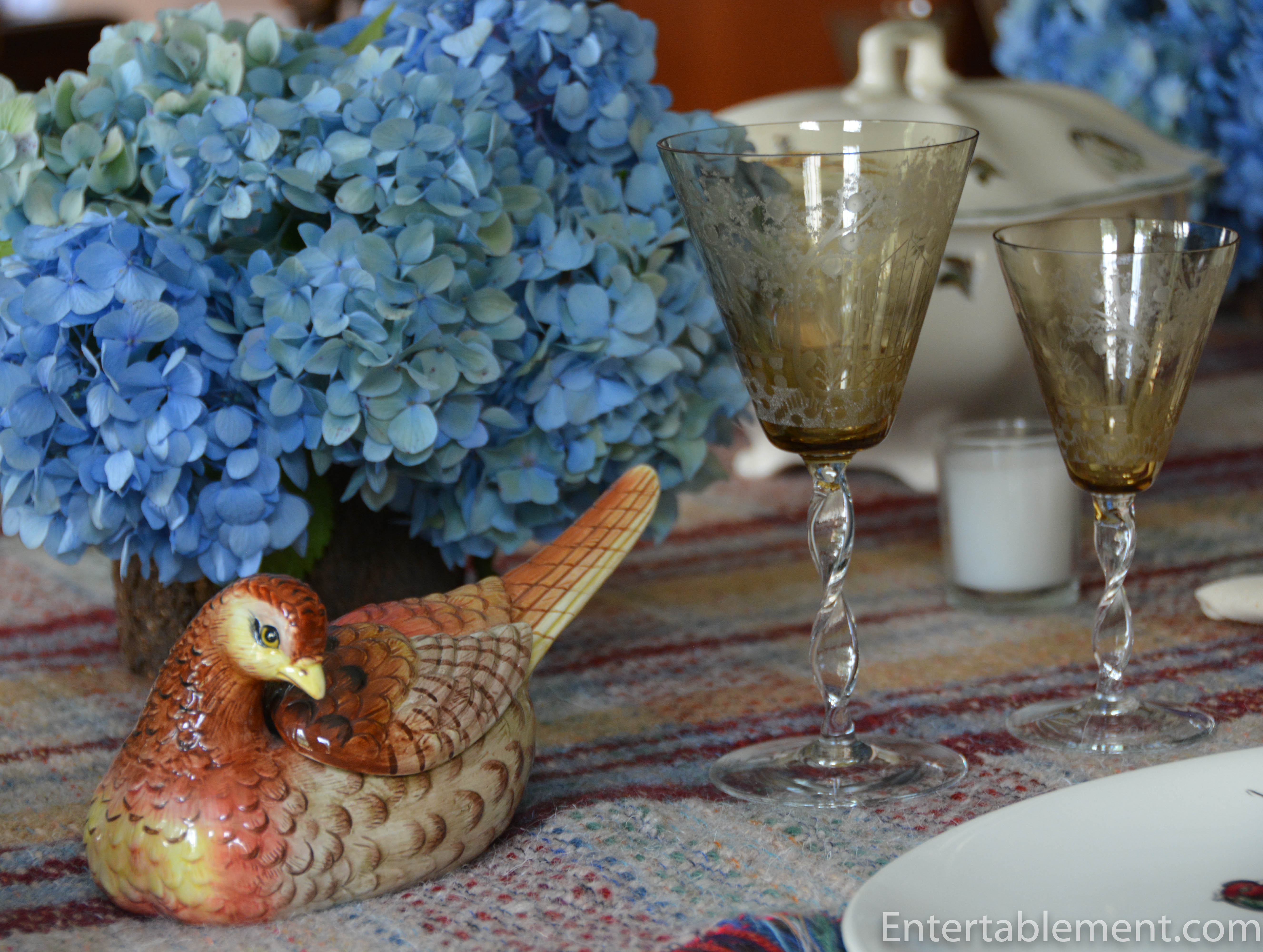 Here she is in the daylight. I think she’d make a great soup tureen. Hmmm. Another blog… 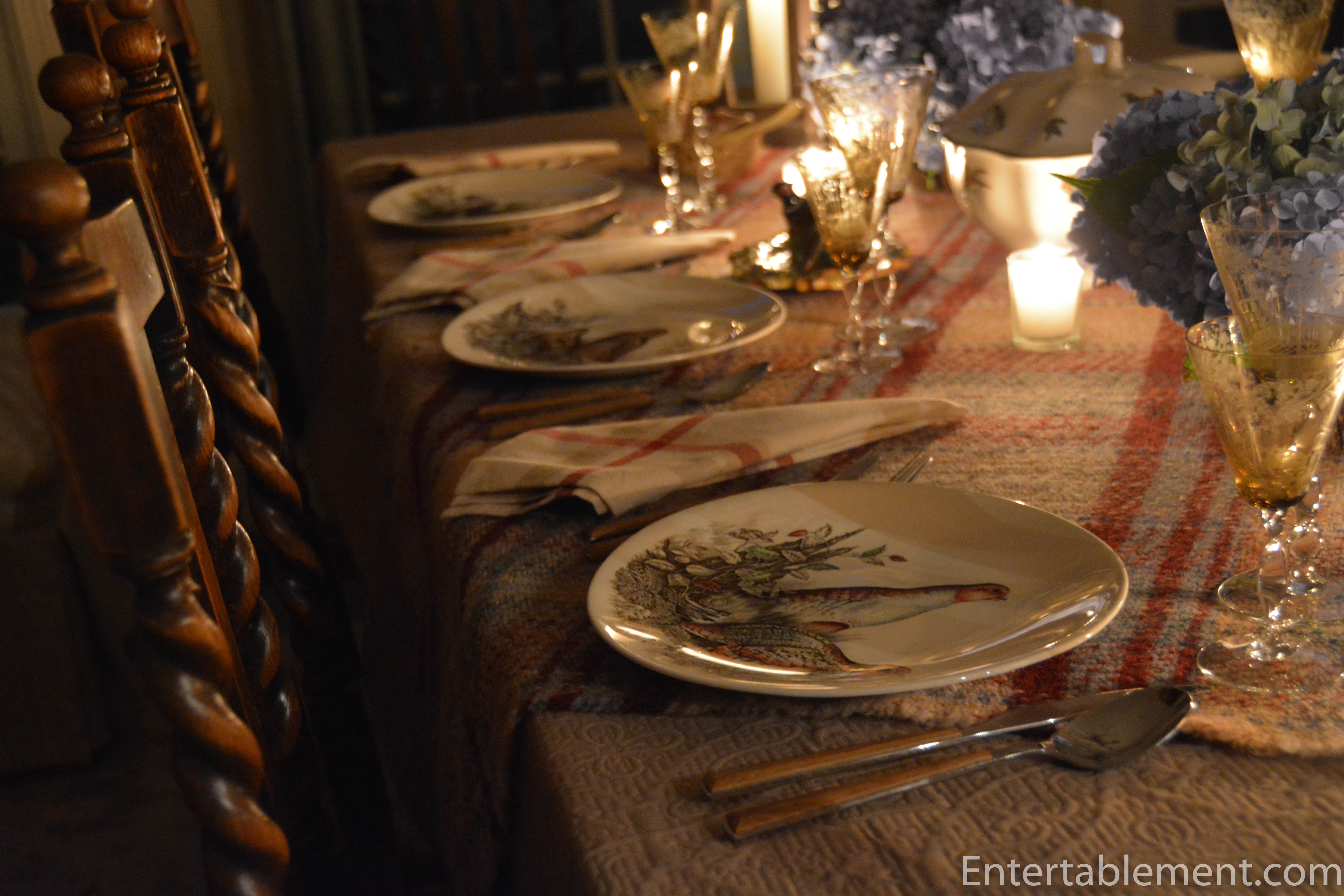 The flatware is Sawyer by World Market. 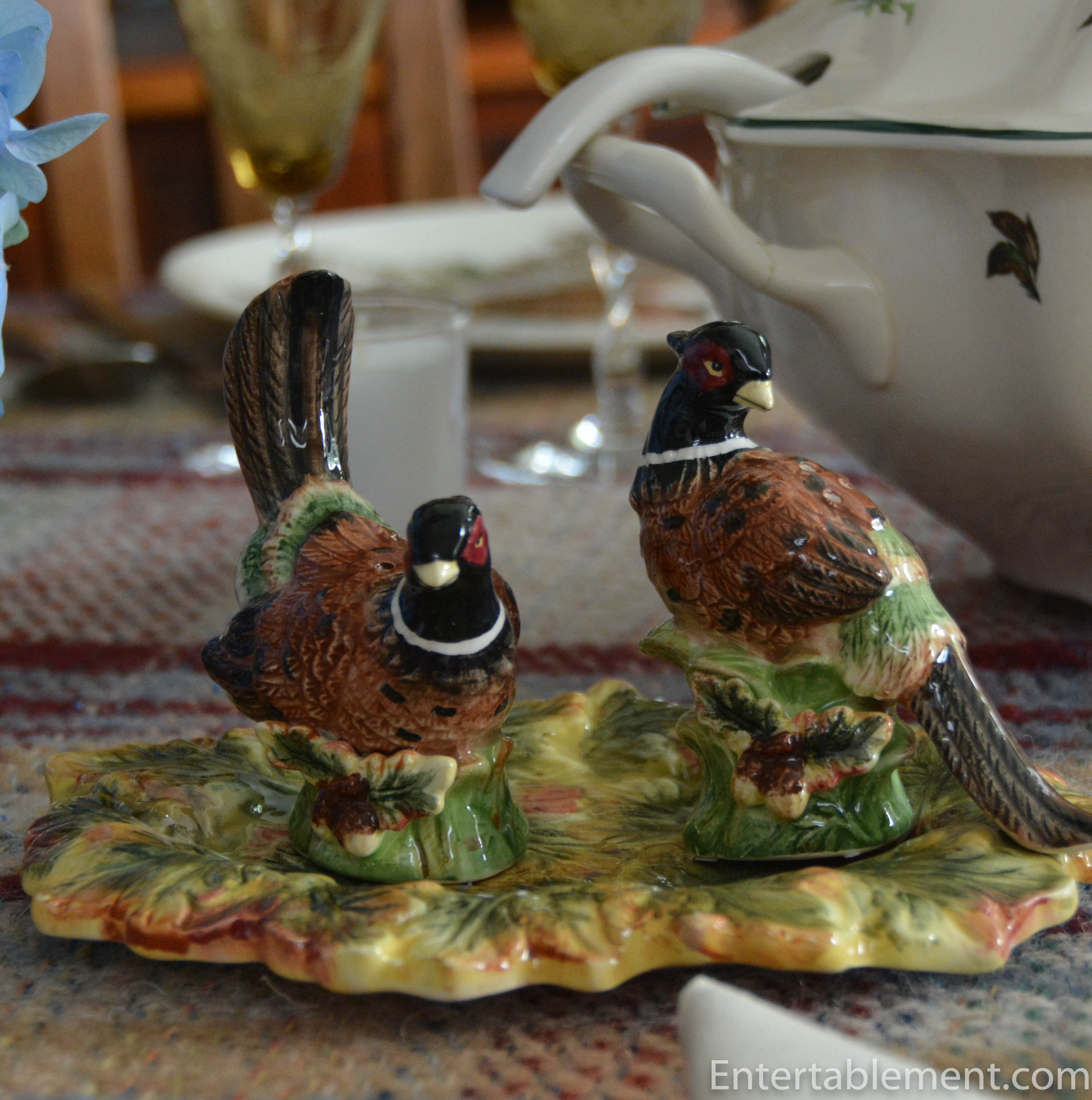 One last peek at our pheasants. I think the guy on the right looks quite cranky… 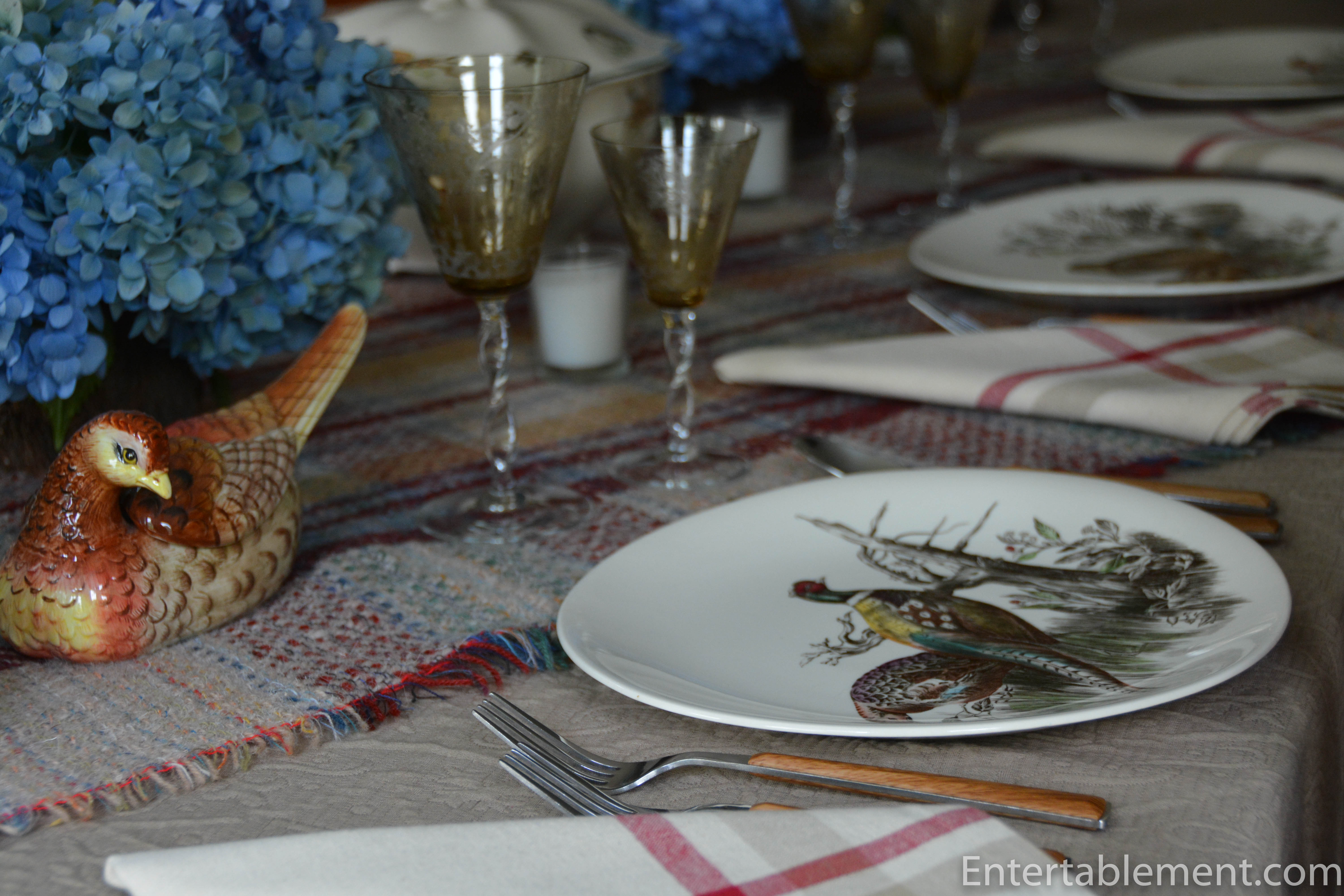 Almost forgot – the napkins are from Wayfair a couple of seasons ago. 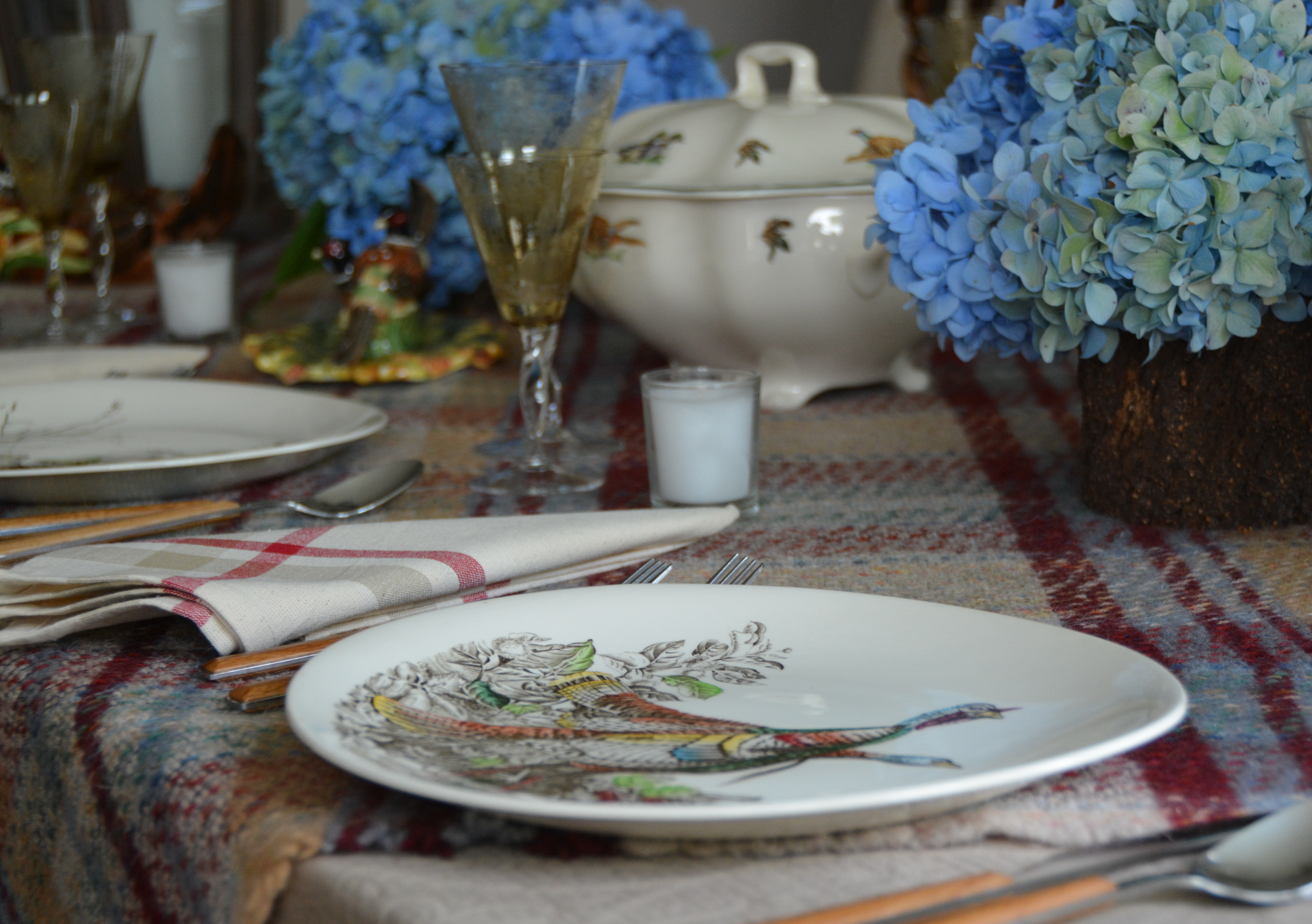 Who is your favourite of all the birds? While I like them all, I think the ruffled grouse is the front-runner with me. 🙂