Swimming Along with La Mer 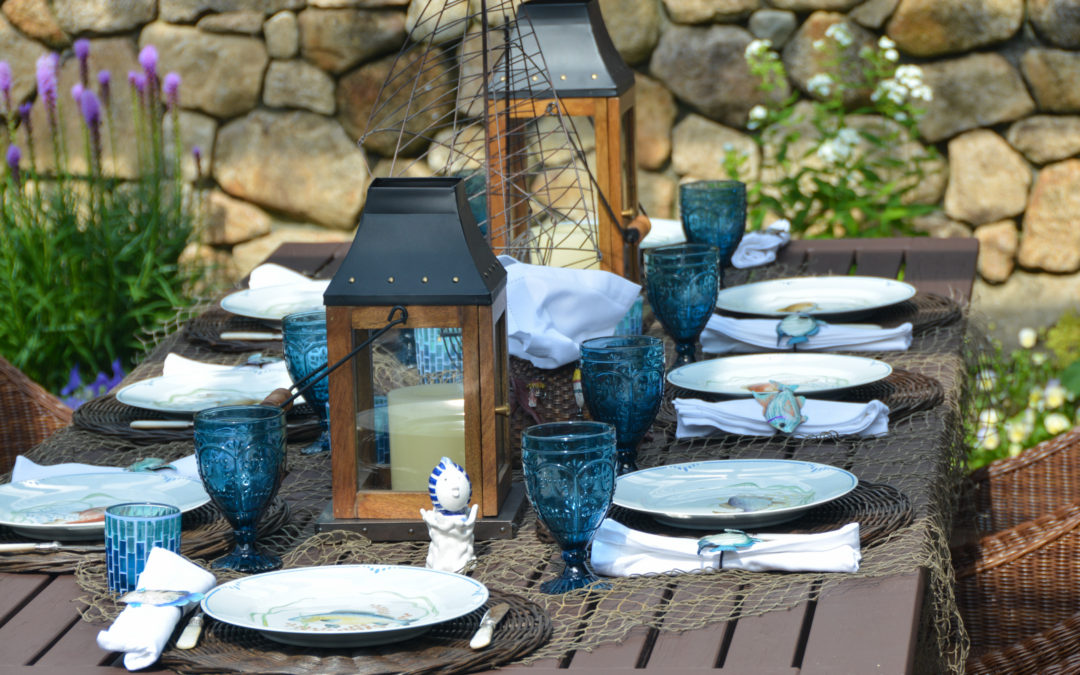 When I think Fitz and Floyd, I think figural, or sculptured pieces, such as the pumpkin tureens and compotes used in this fall table. 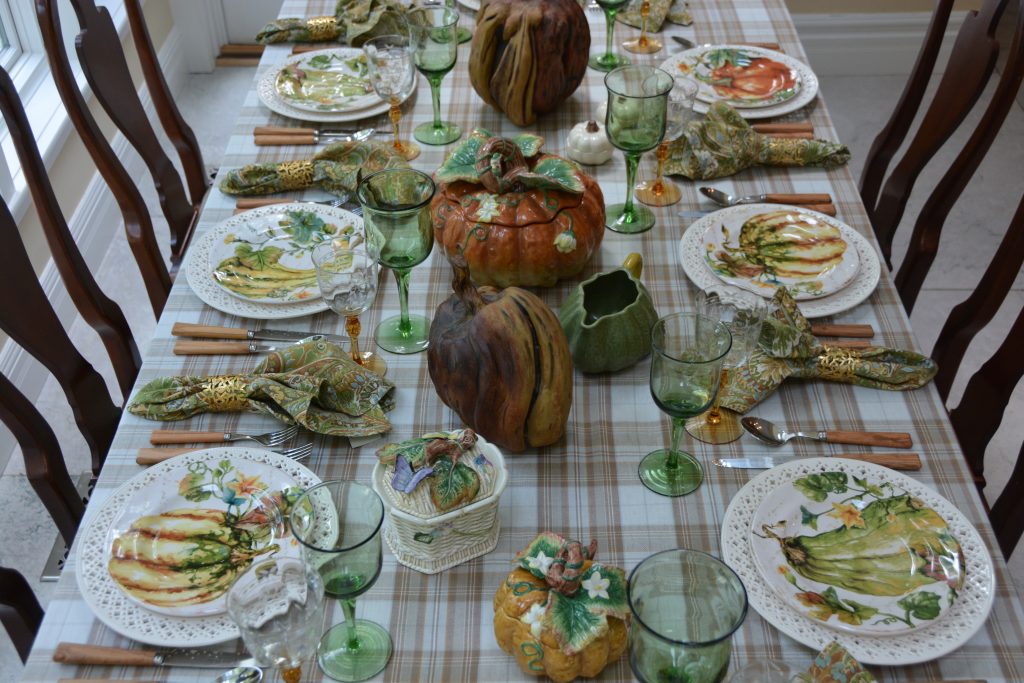 Or the bunny bowls that give us so much pleasure in the springtime. 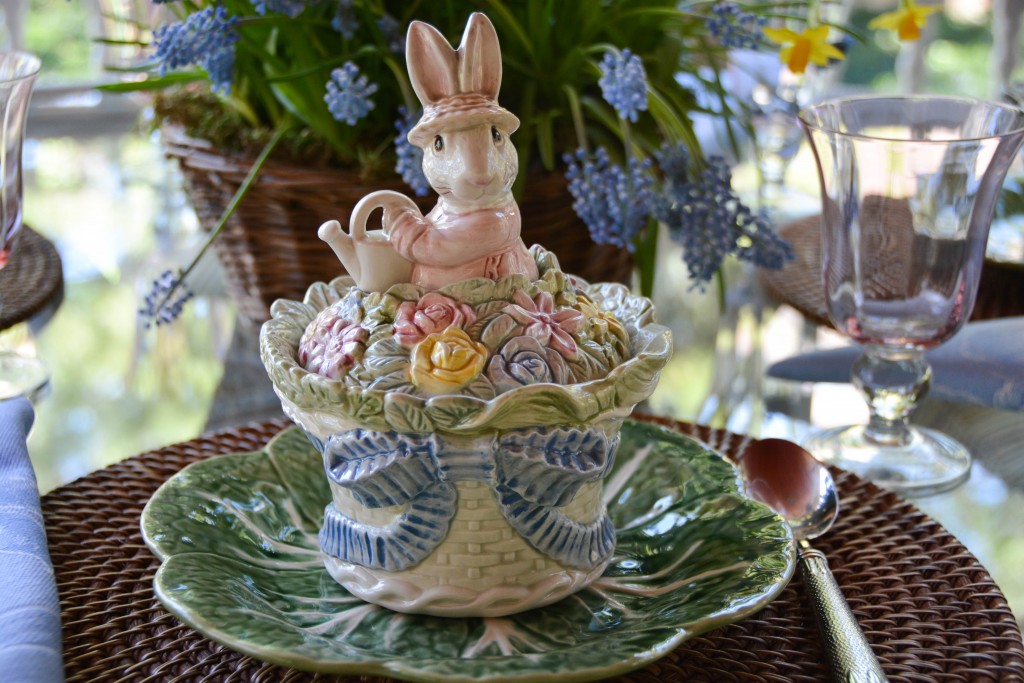 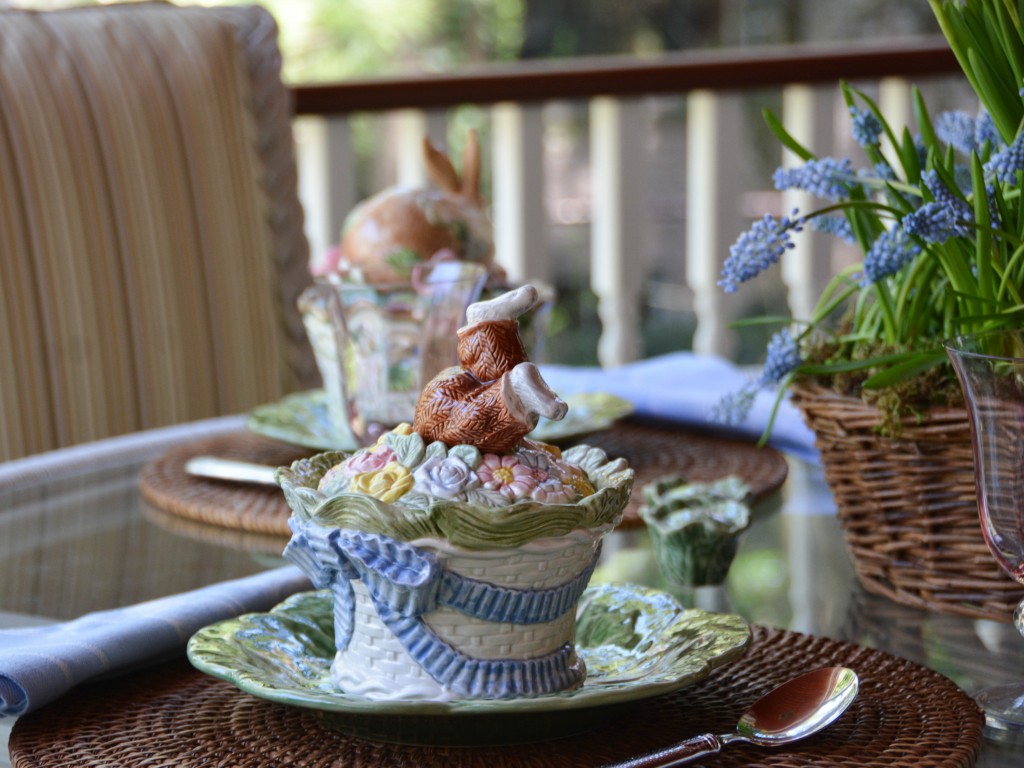 Fish plates? Not so much. But La Mer they do indeed have. 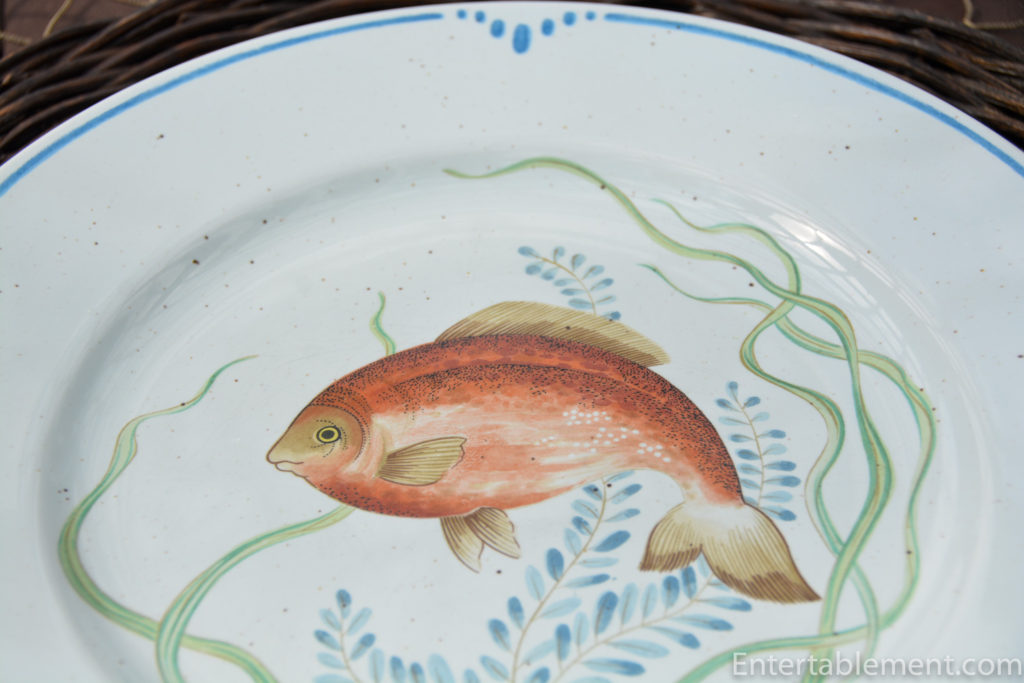 The pattern is from about 40 years old, judging by this advertisement in Architectural Digest from 1980. 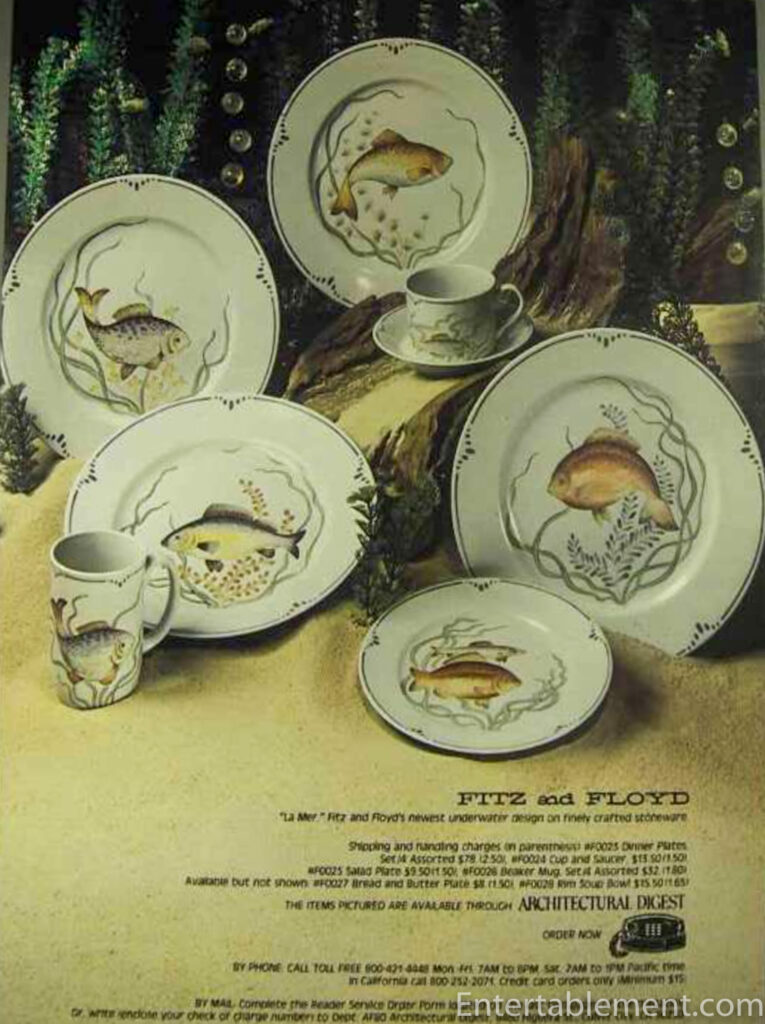 It’s so much fun to take a vintage pattern and put it into a modern setting. So let’s cast a line and set to work. 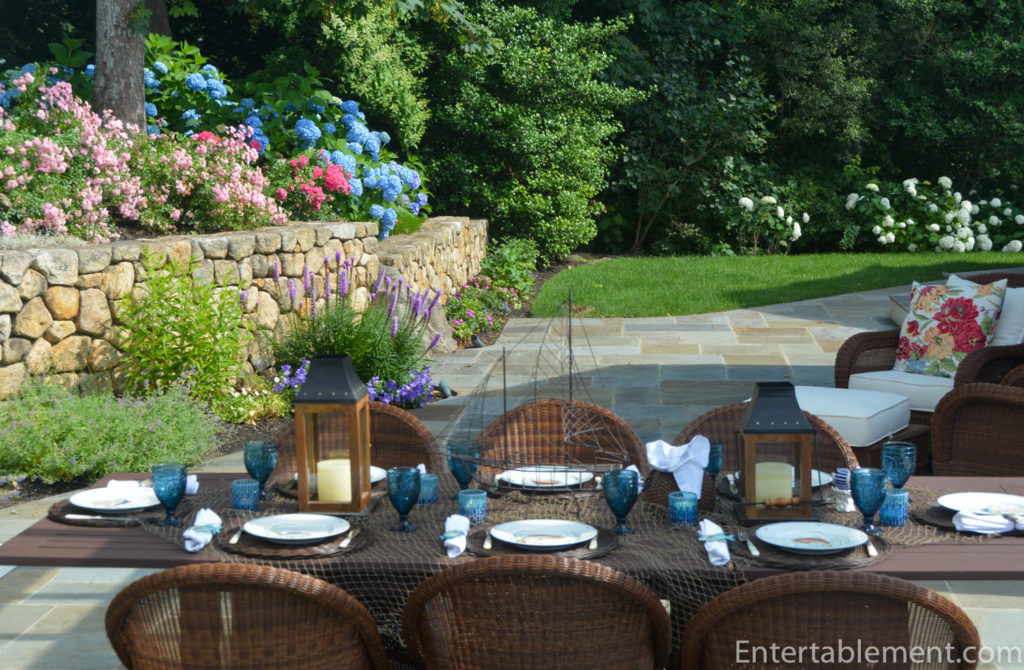 We’ll start with a fishing net for a tablecloth. 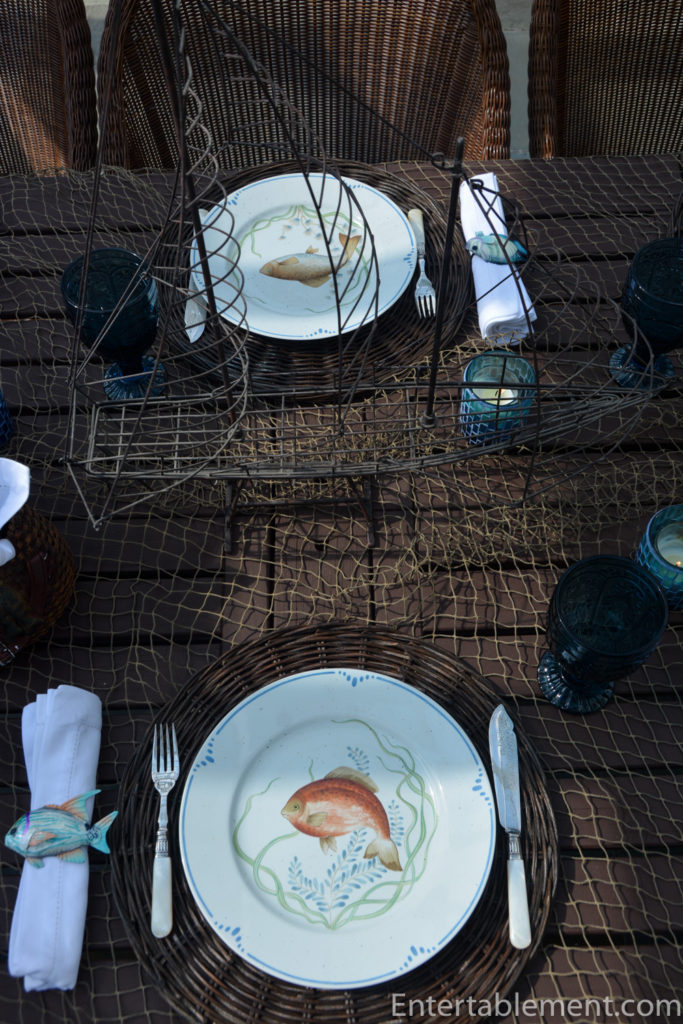 And bring out out the wire sailing ship that usually sits on our fireplace mantle. 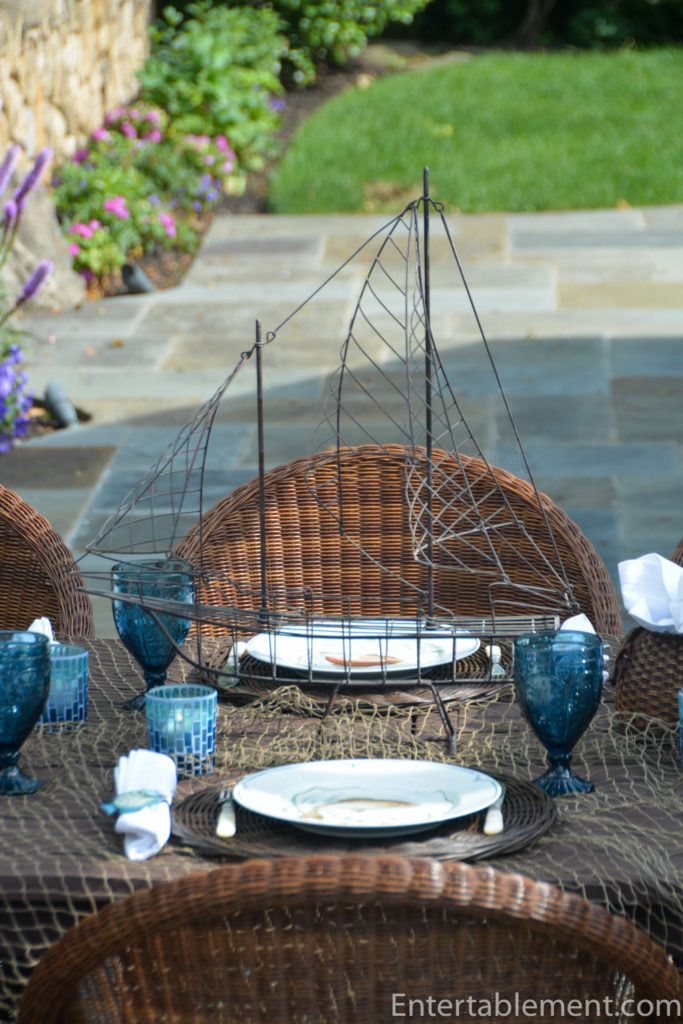 The blue edging on the plates is a denim blue, so let’s use Trestle glassware (also by Fitz and Floyd, but current) and some mosaic votives in varying shades of blue which we purchased a number of years ago for daughter Kirsten’s wedding.

There are four different dinner plates. 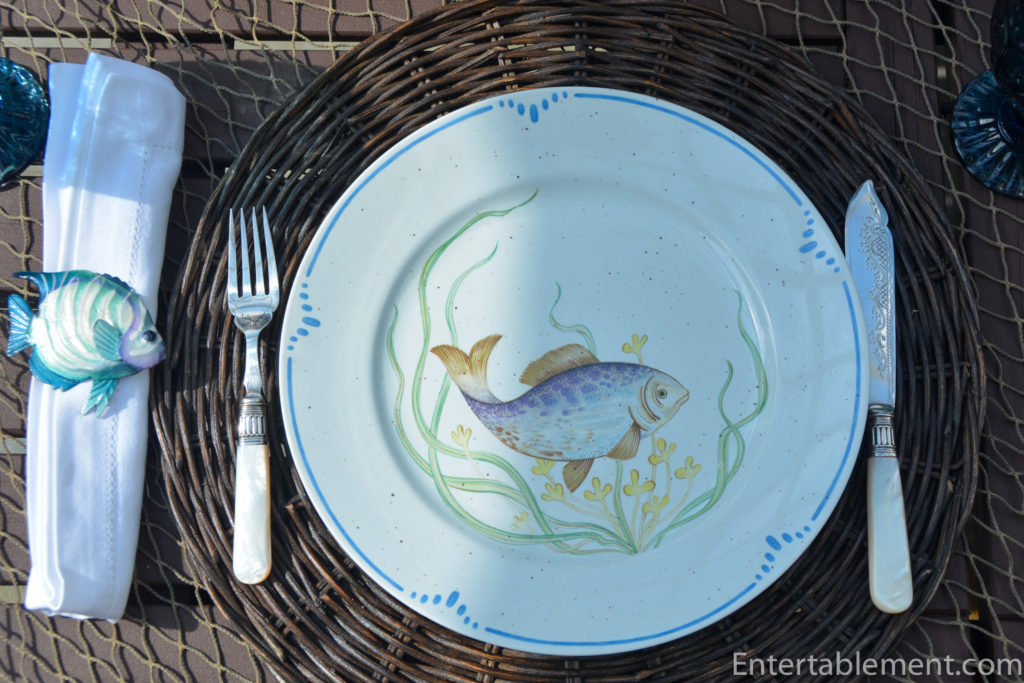 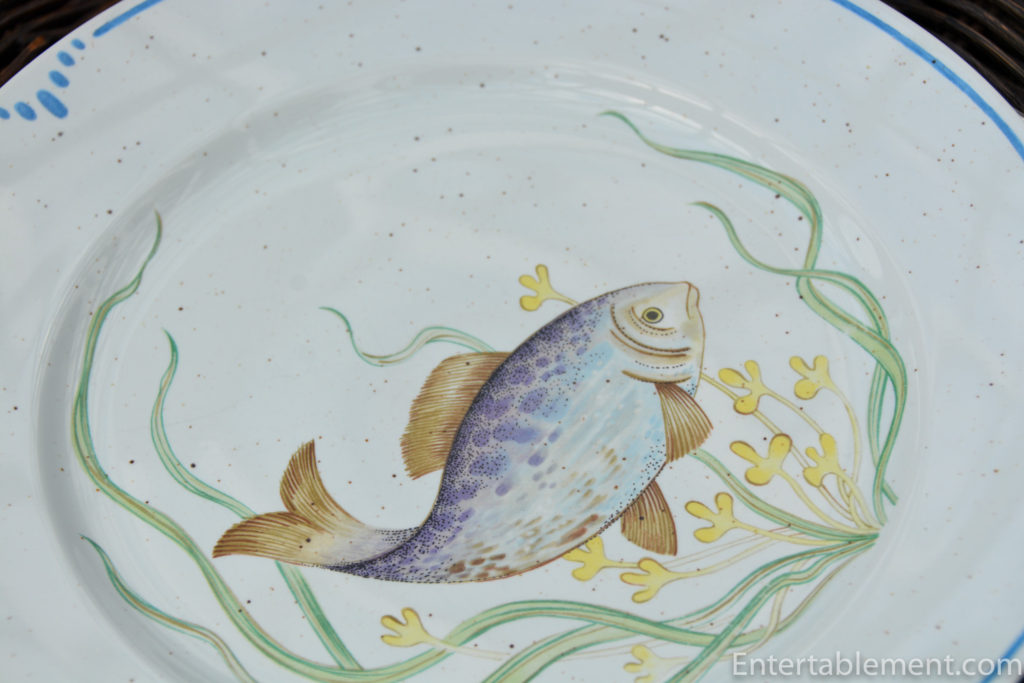 The background of the plates has a mild speckled pattern, evocative of being underwater. 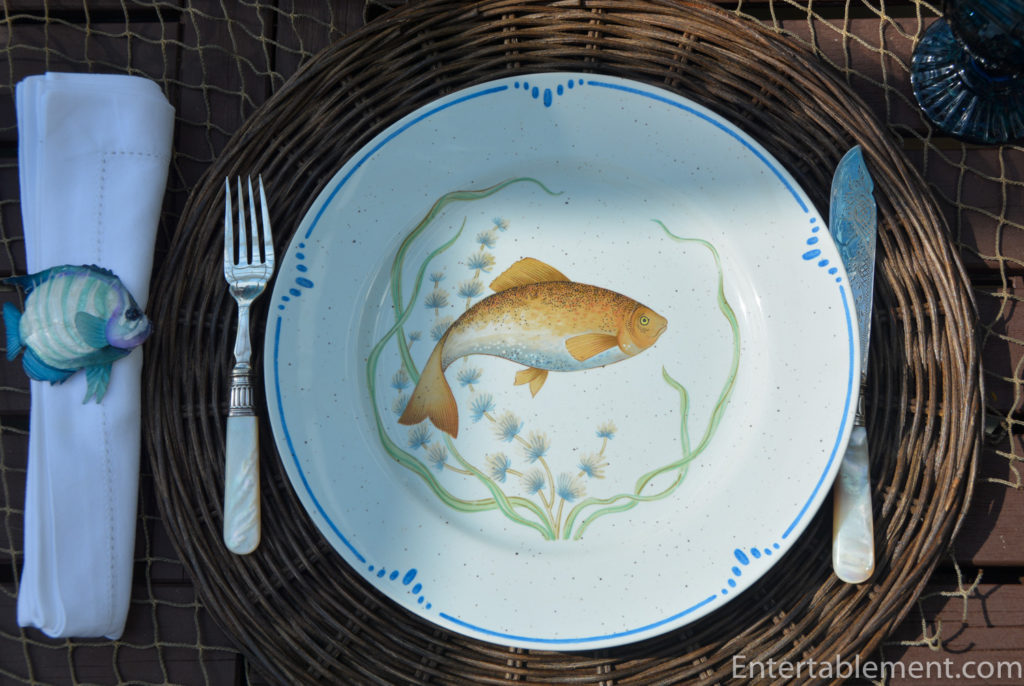 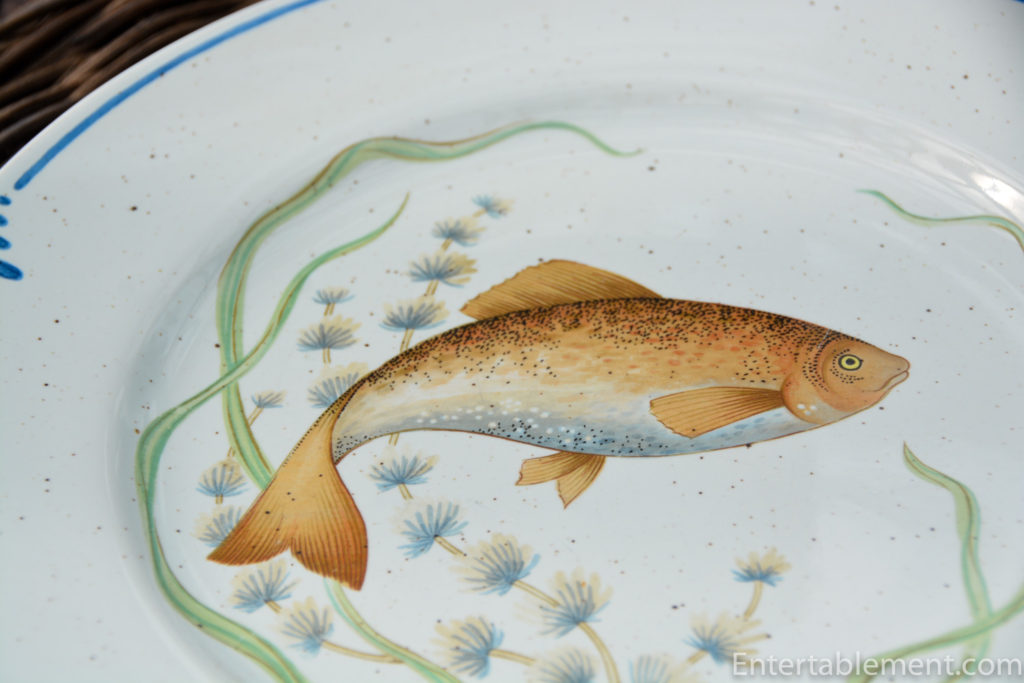 The detailed depictions of the plant life are as charming as the fish themselves. 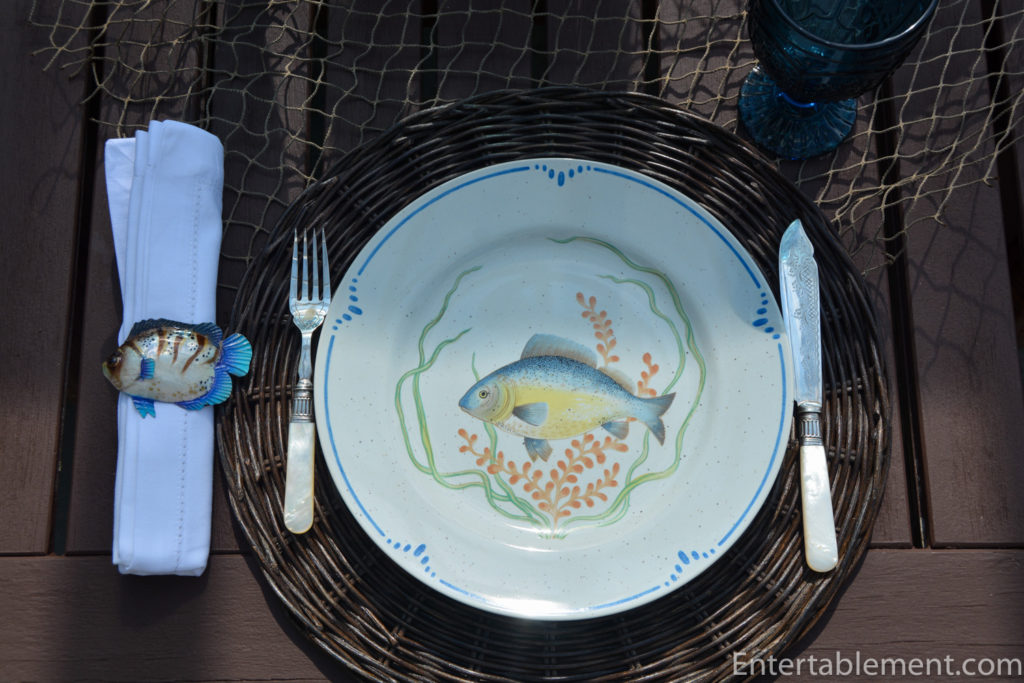 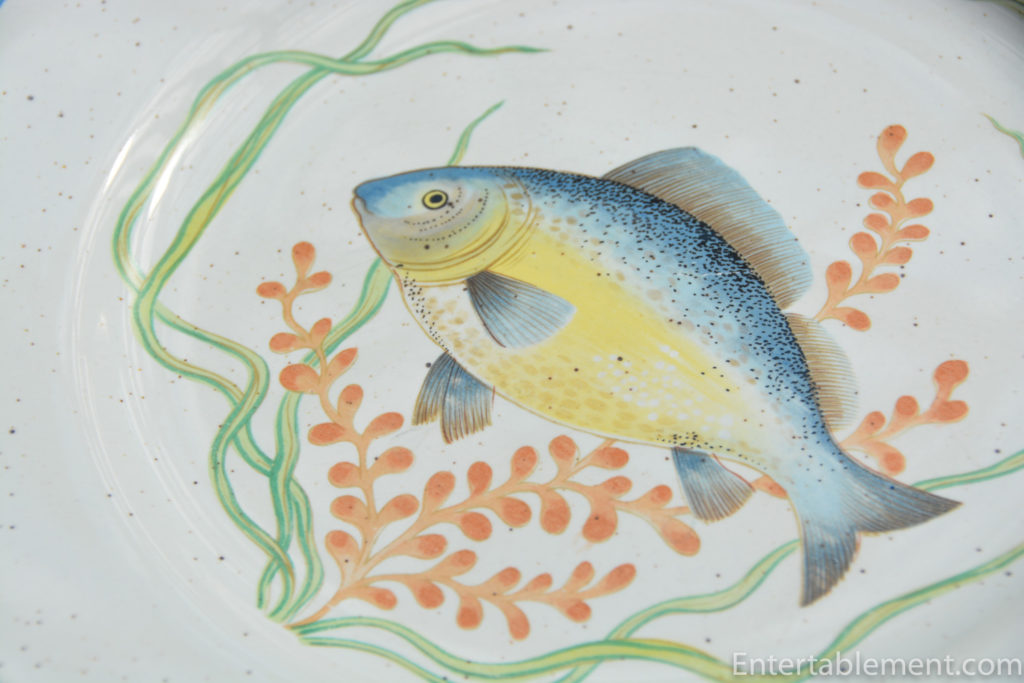 It’s a deceptively simple pattern, with lots of white space. I found myself being drawn into the briny deeps, though, as I examined it more carefully.

In researching the pattern, it seems that there were two different bread and butter plates, which strikes me as odd, but who am I? One has a brown fish in the foreground and the other has a blue fish. 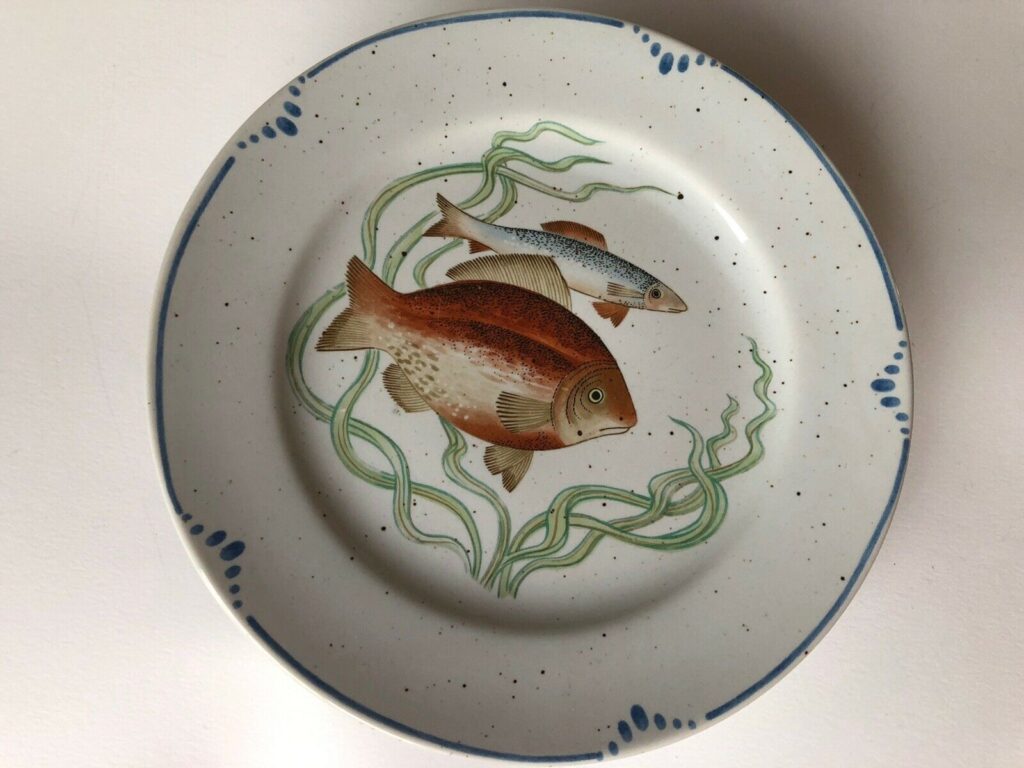 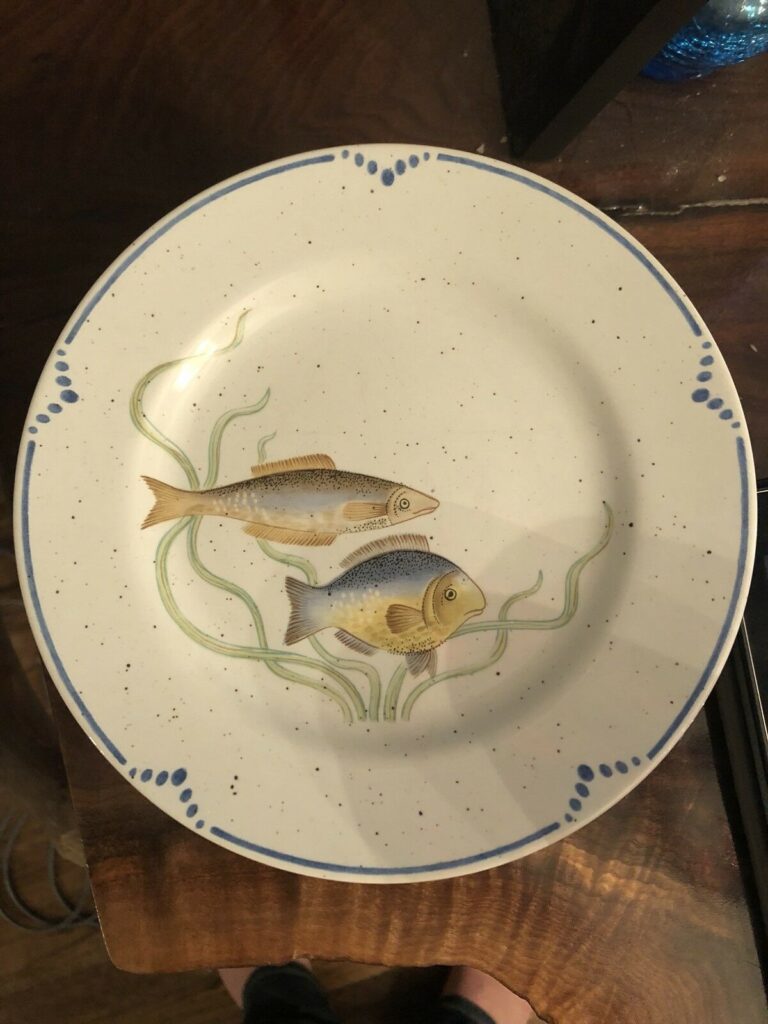 From what I can gather, the salad plate and the soup plate shared one pattern, which is the same as one of the bread and butter plates. 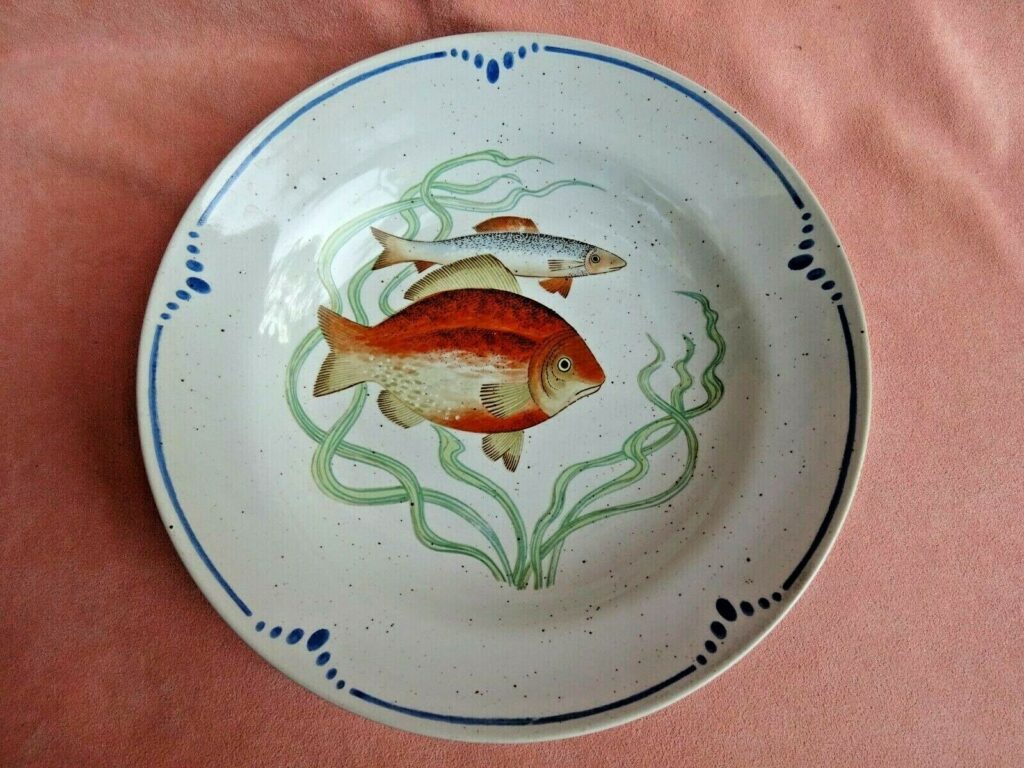 There were four different mugs, which have the same fish that grace the dinner plates. So far I’ve only bitten on the dinner plates, but I must say, those mugs have me intrigued. And yet… those fishy eyes might be a bit much first thing in the morning. 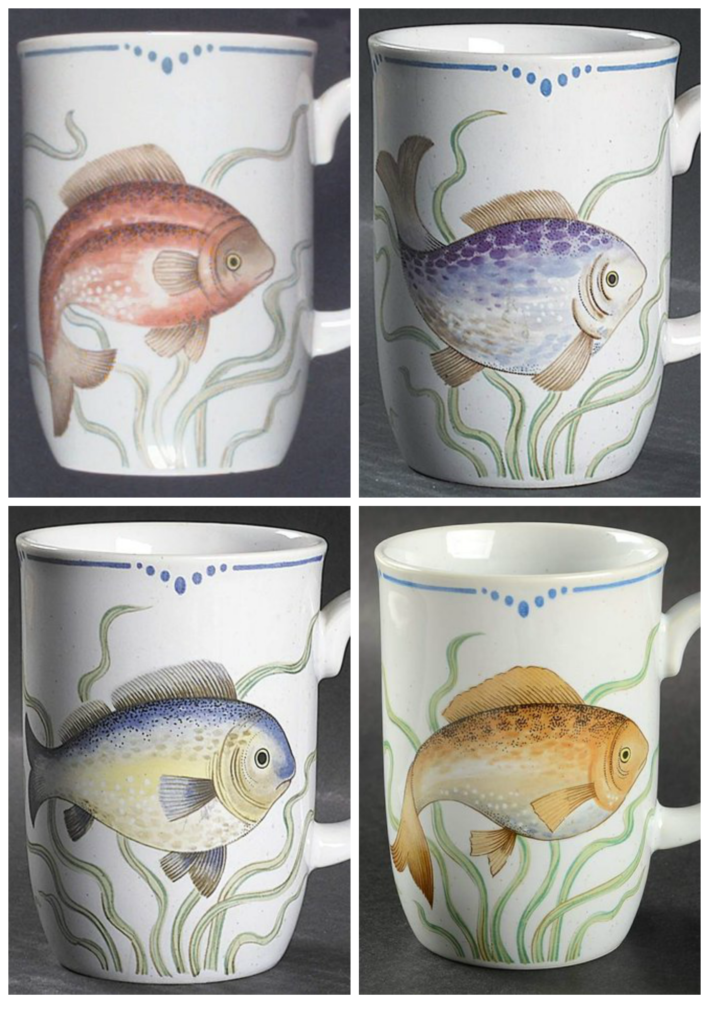 Once in the fishing mode, however, I felt compelled to add some gear. A ceramic fishing creel from a party supply store was a fun catch. 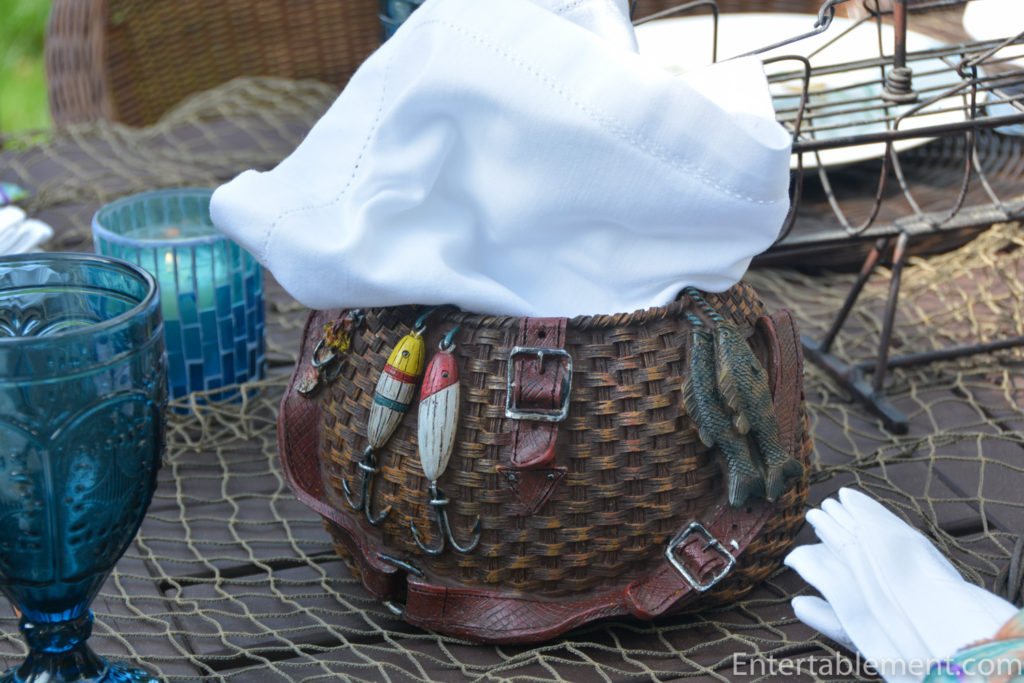 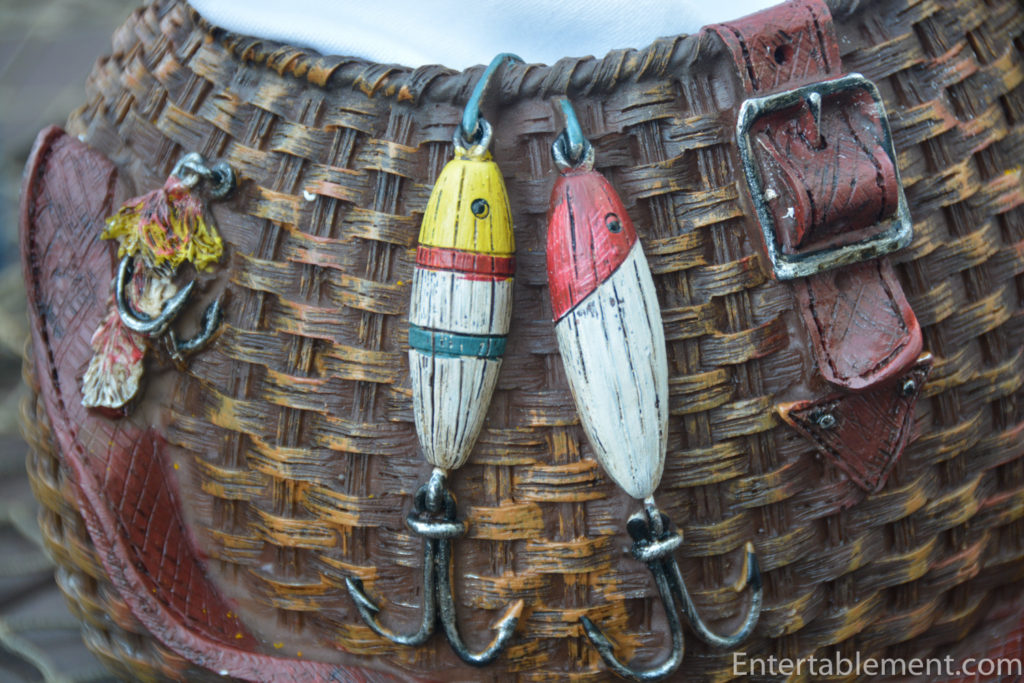 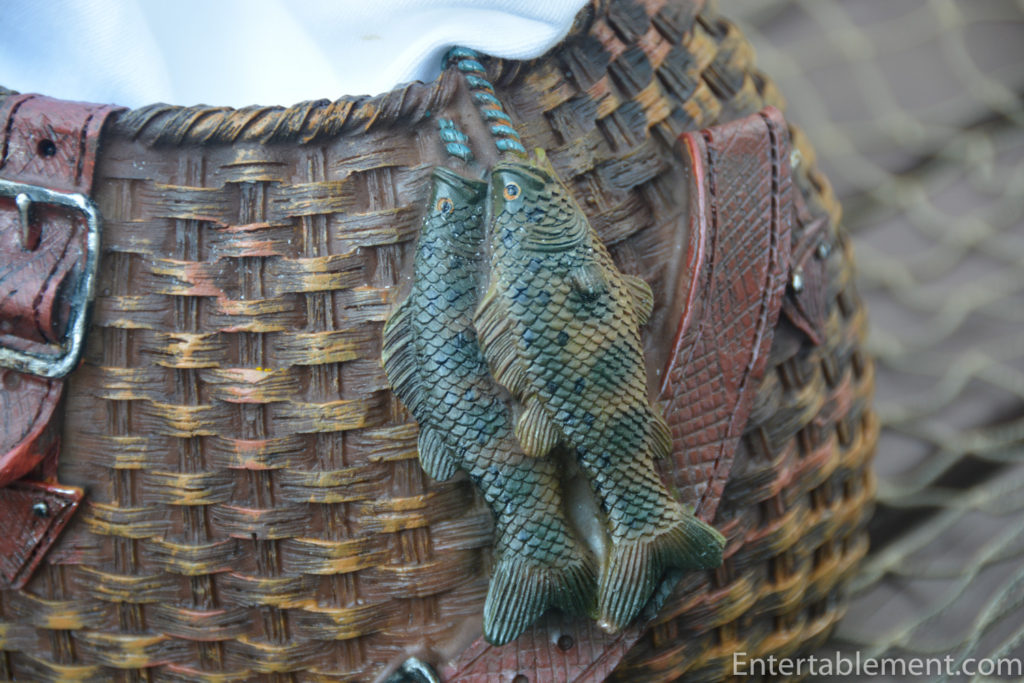 That left only napkin rings to source; for whatever reason, they came in sets of three, not four. But the colours were right. The turquoise blues and muddy browns added a coordinating element of visual interest. I got them from Amazon – now out of stock. There are fish ornaments by the same company, however, for anyone so inclined. 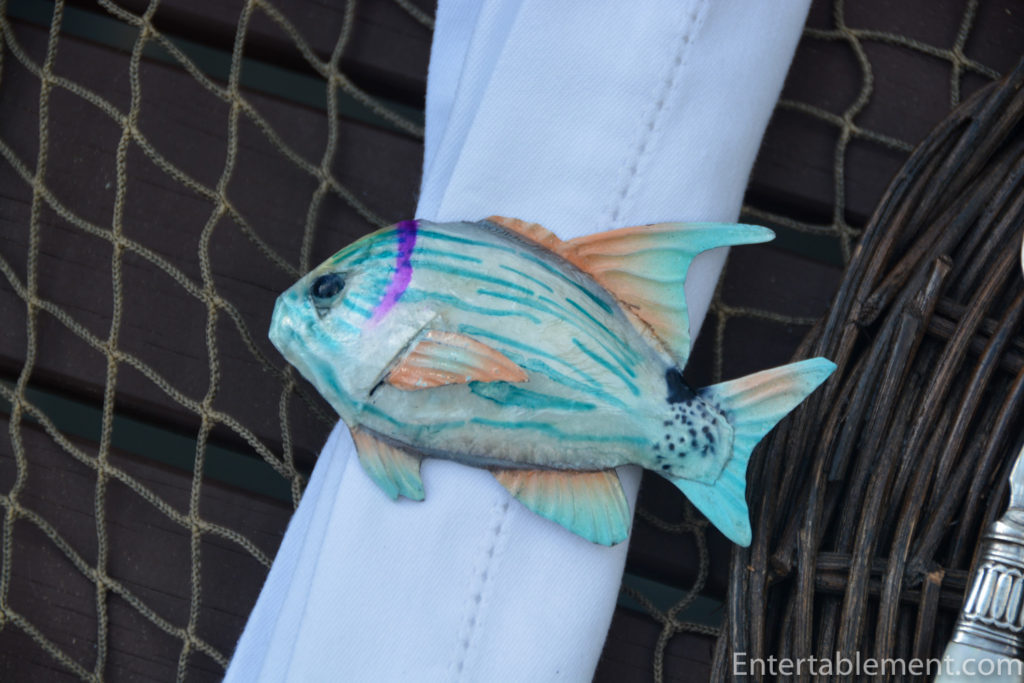 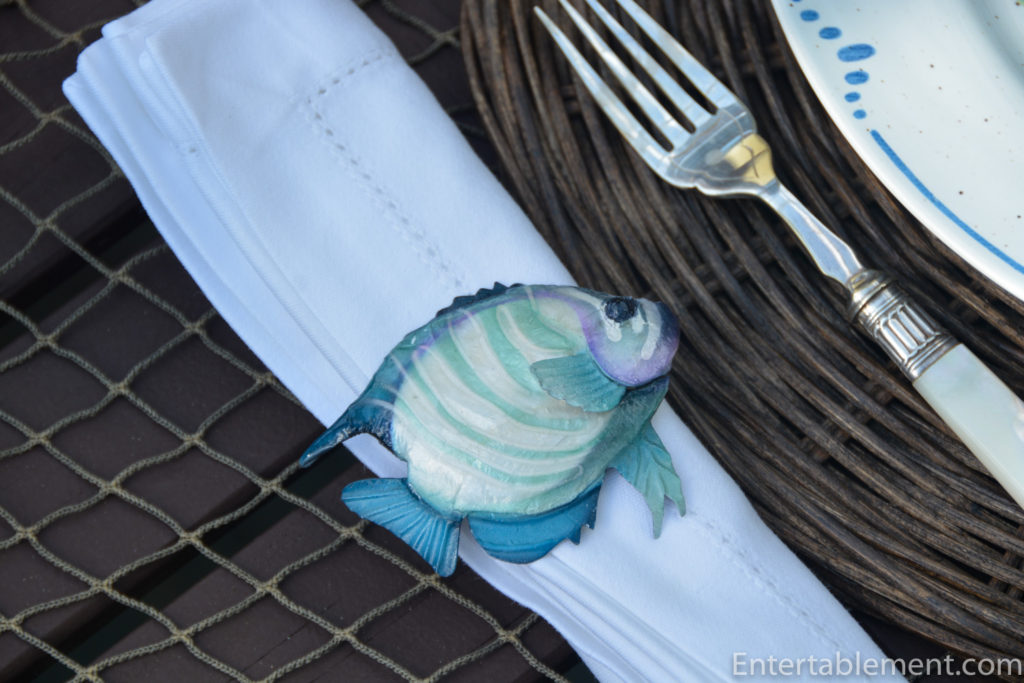 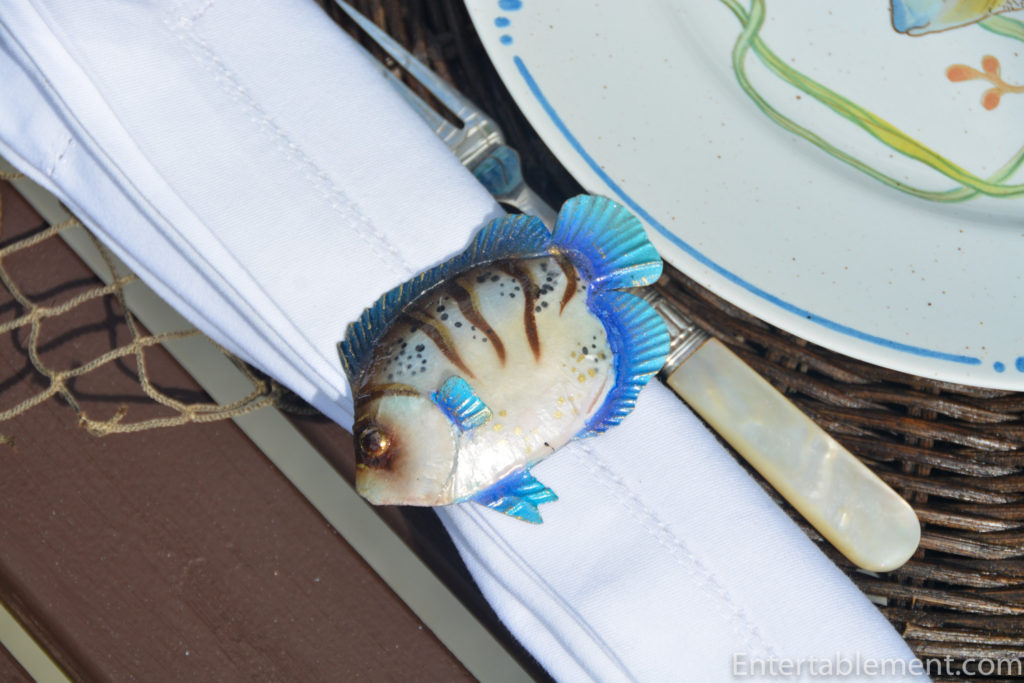 Shooting forward a century, we have fishy salt and pepper shakers from Pier 1. 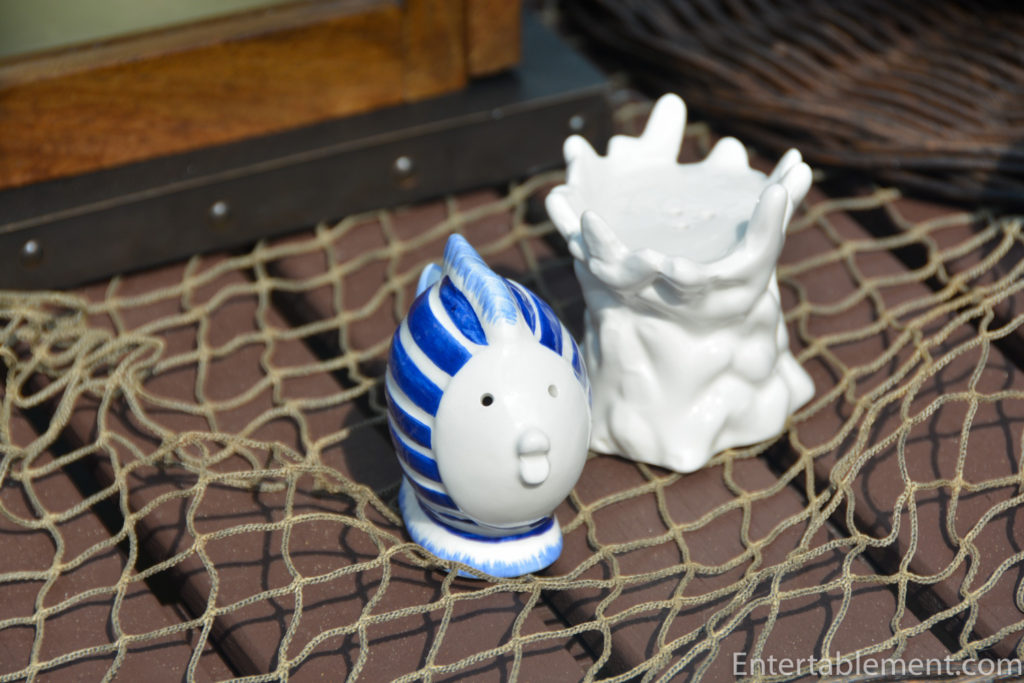 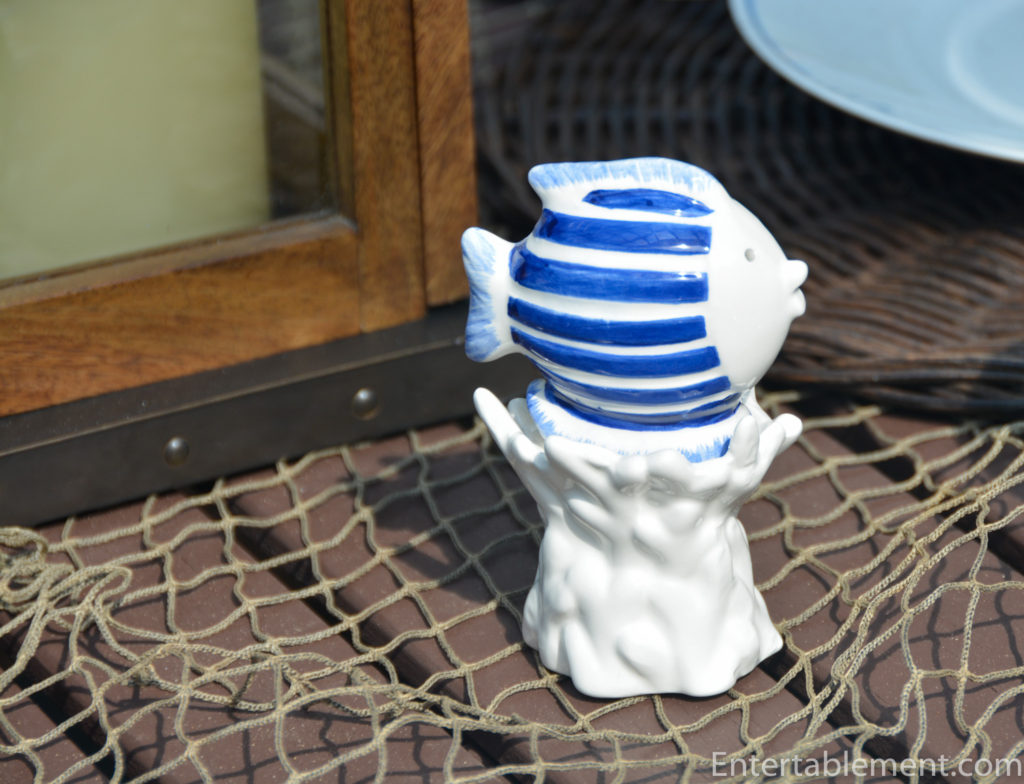 Thanks for joining me on a fish-filled adventure! 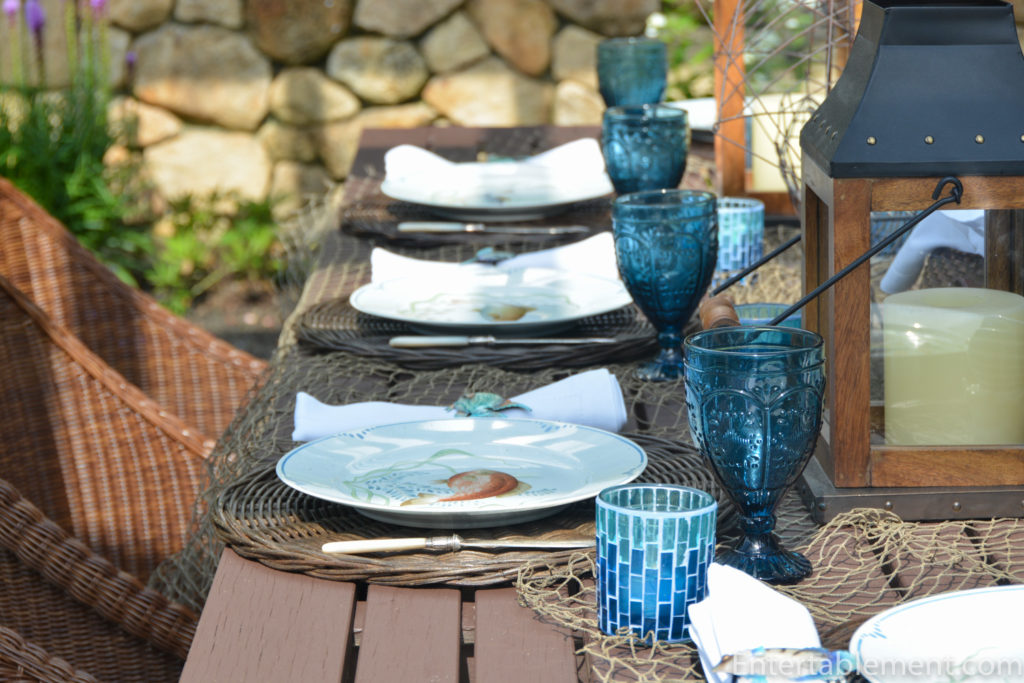 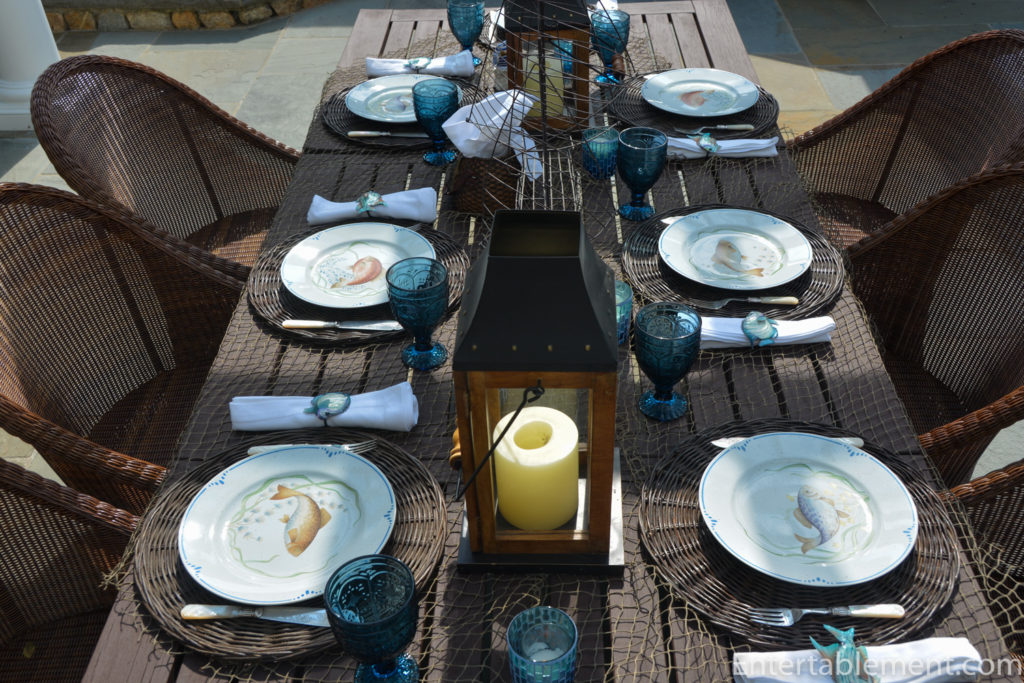 Still, I’m beginning to have niggling thoughts of preparing for fall. Before we know it, it will be September and this gal will be heading back to Canada to enjoy sitting on the porch, cooking with abundant produce and anticipating the changing leaves.  We’ve been visiting with family over FaceTime, but I’m looking forward to seeing everyone in person again. The little ones are anticipating a baking frenzy and have put in requests for their favourite items. Nana is more than happy to oblige!

Have a good weekend, all.