Longtime readers of Entertablement will know that Halloween is not my favourite holiday. While I love seeing the little ones dressed up in their costumes, the destructive and sinister side of Halloween doesn’t appeal. 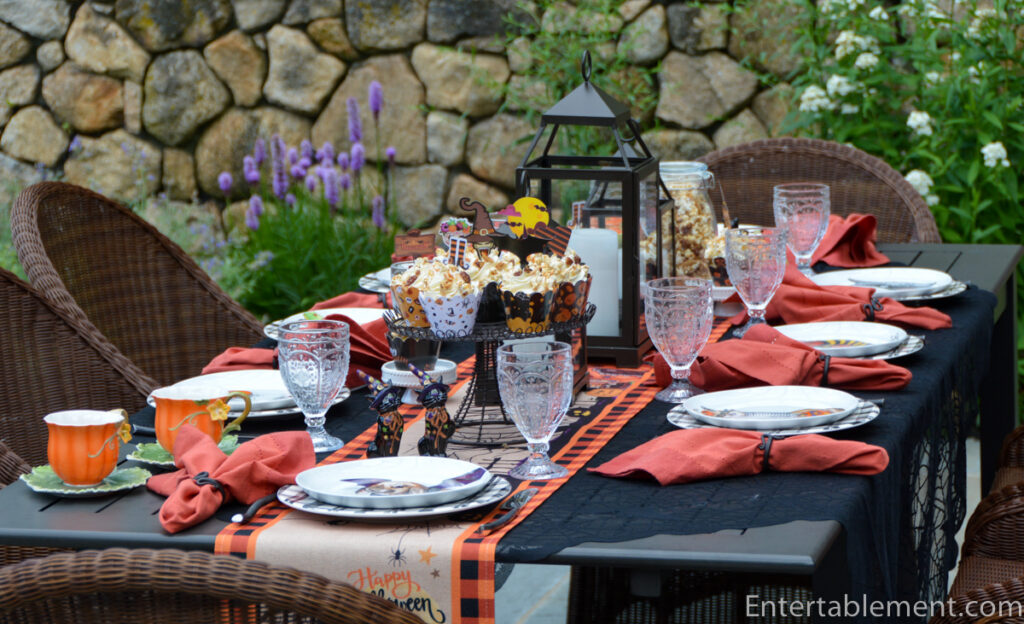 But plates of animals dressed in costumes? That I can get behind. 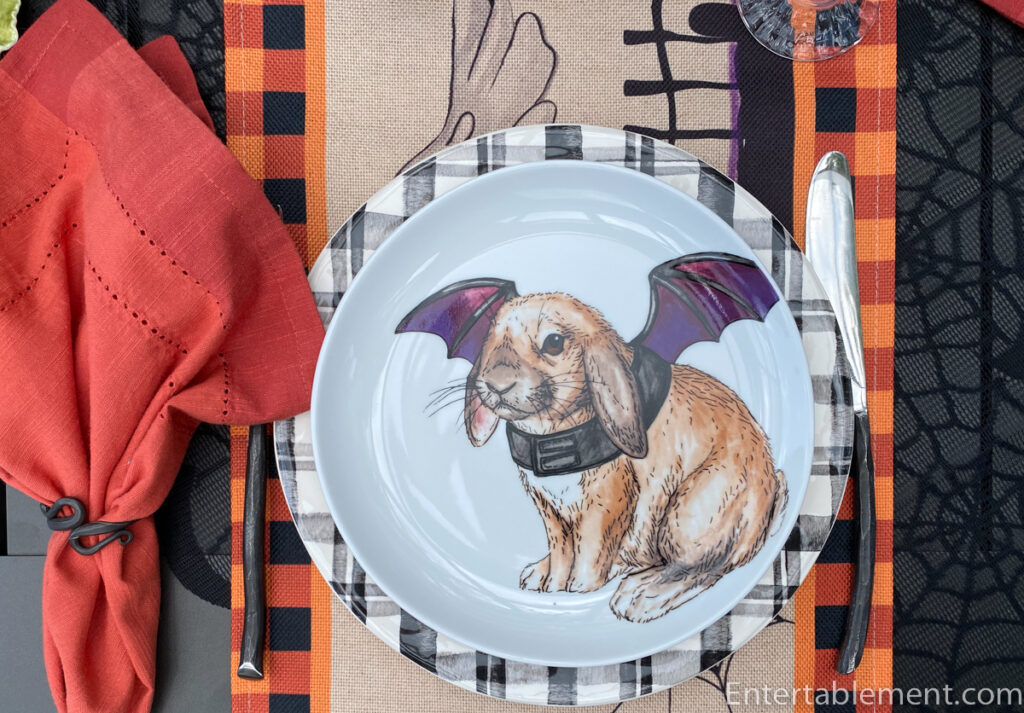 West Elm has been producing the Dapper Animal series based on drawings by Rachel Kozlowski for years now, but somehow I missed the Halloween animals rendition. 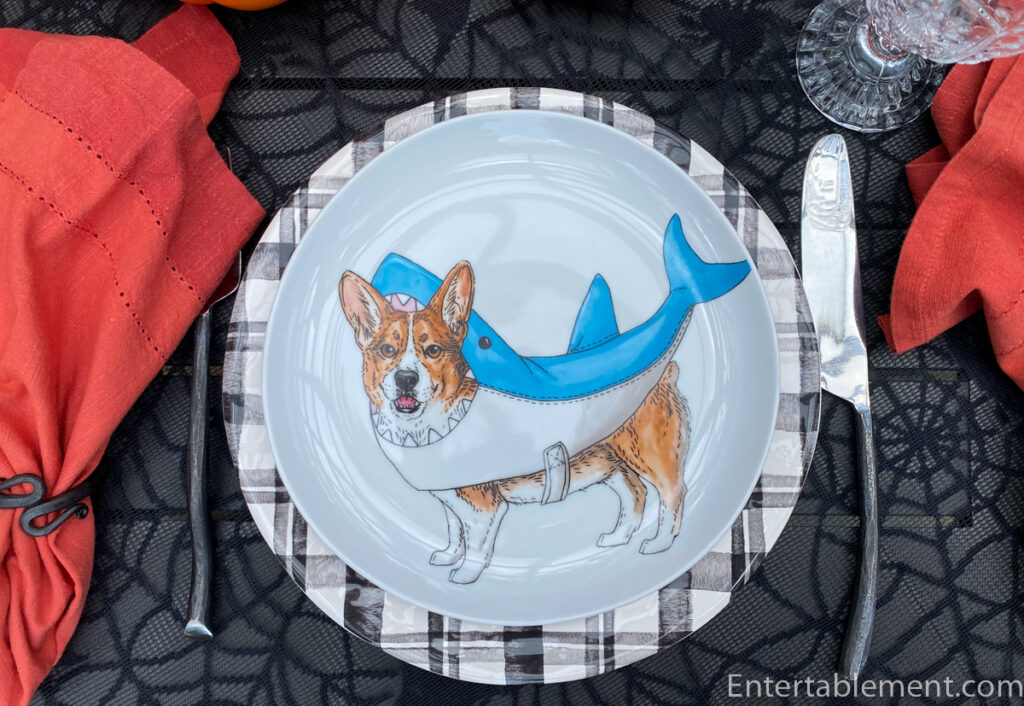 Judging by the offerings on eBay, I believe it encompassed two different sets of four, the first being the  Bat bunny and Shark dog above and the Alligator cat and Bumblebee chicken shown below. 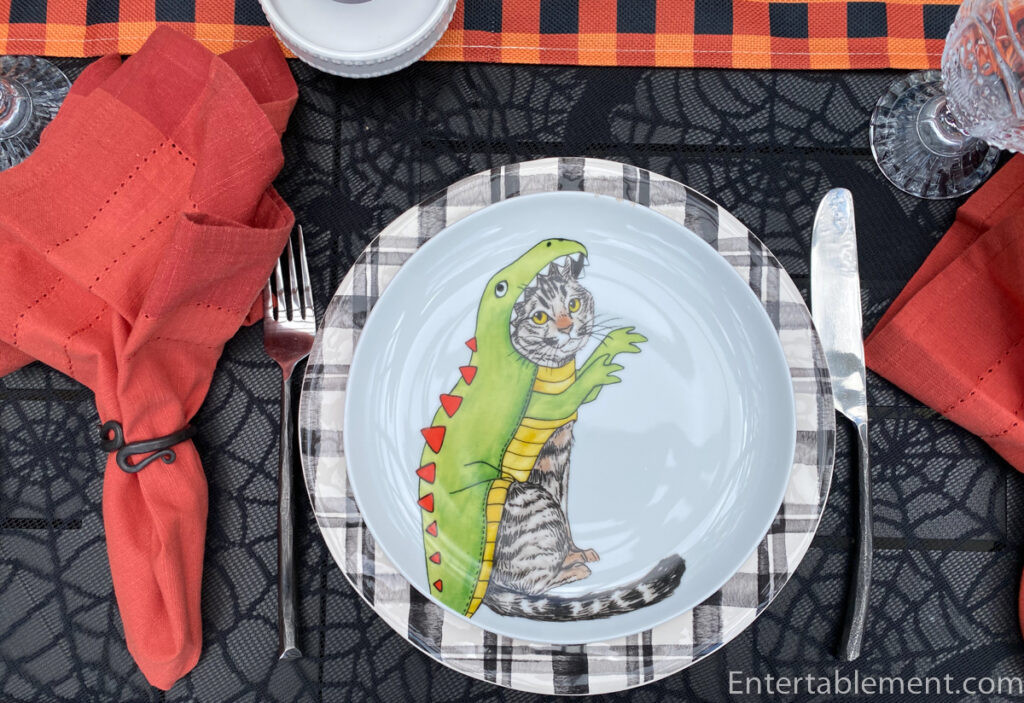 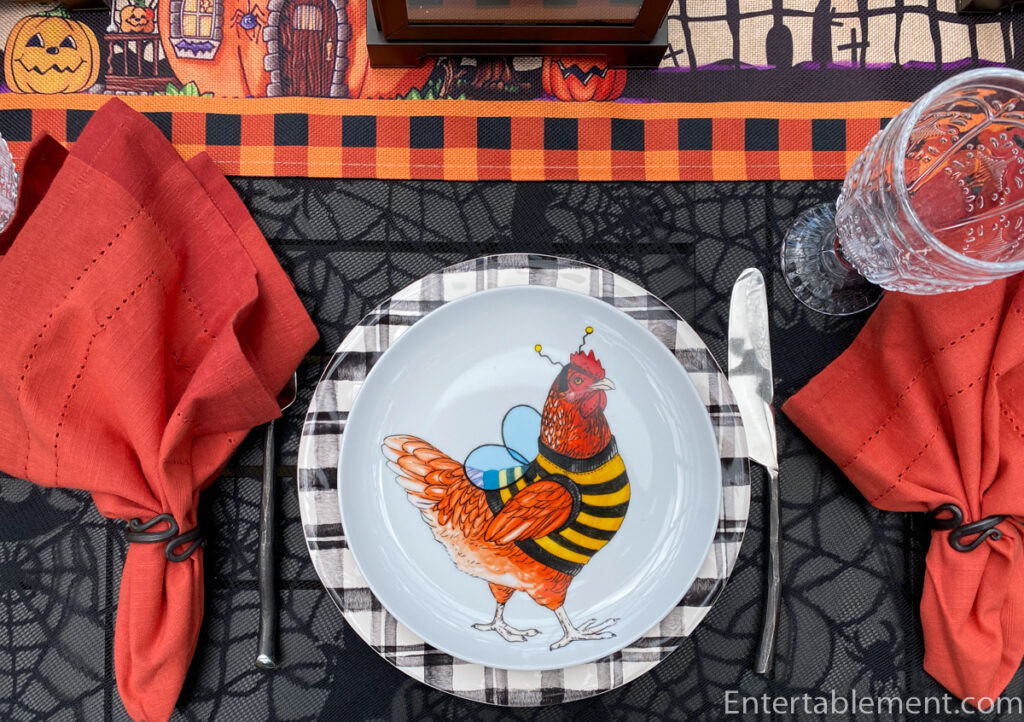 What a fun table they inspired! 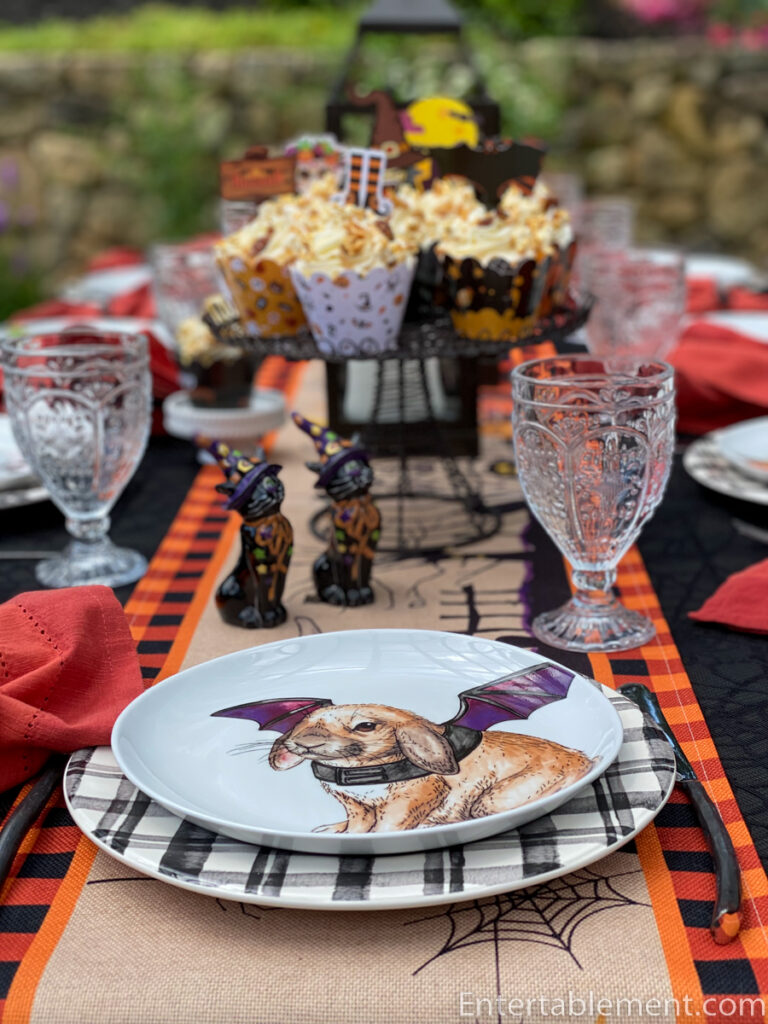 The more recent set of four is still available at West Elm. The unifying feature in the second set is a pumpkin on each plate. From the Witchy Owl… 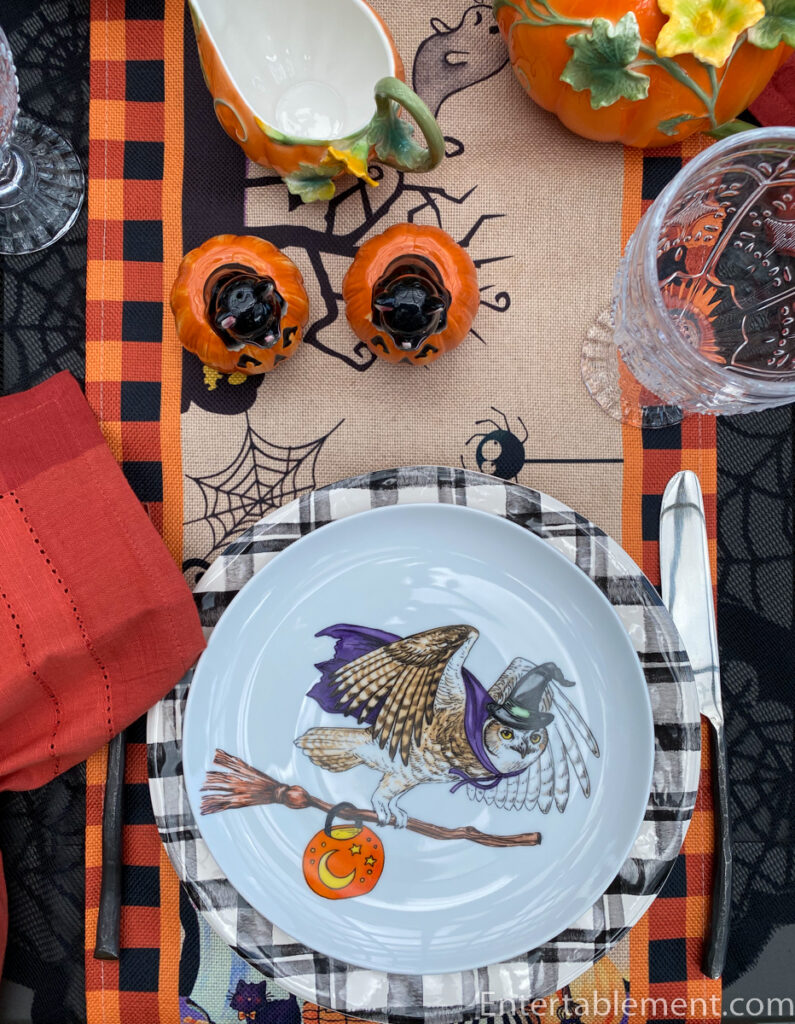 …to the Bandit Fox… 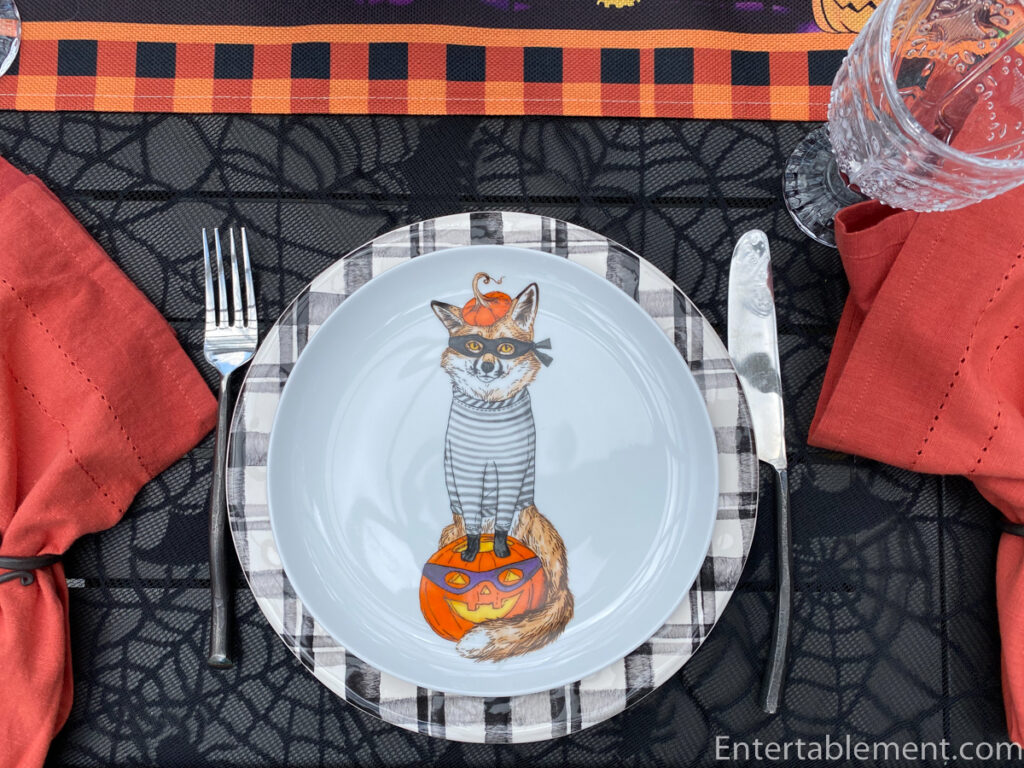 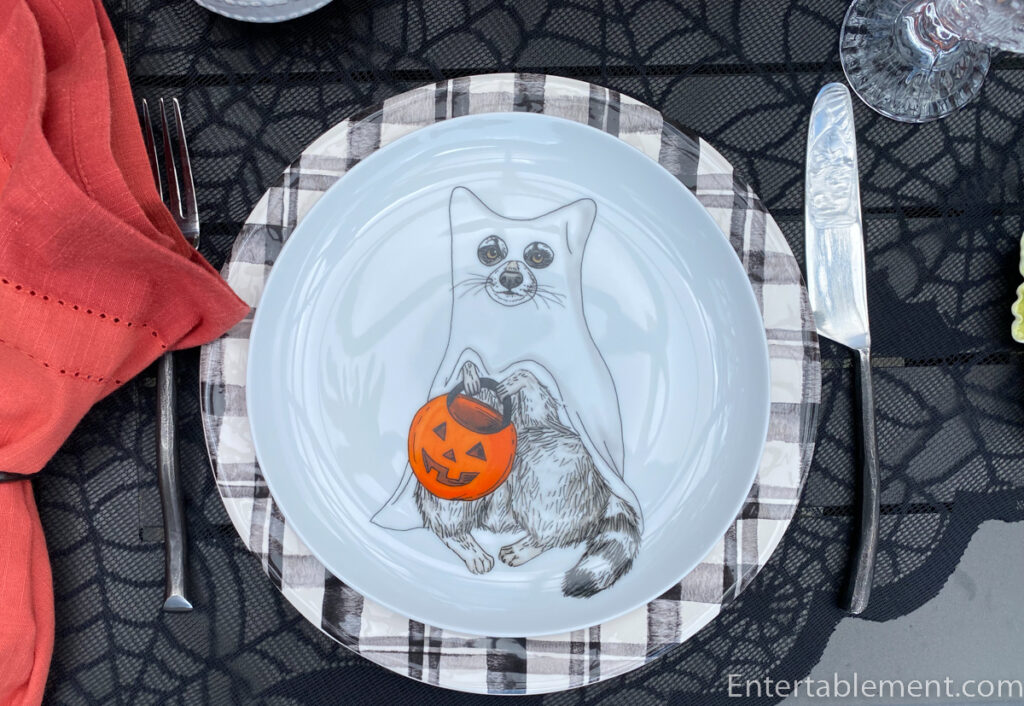 …. and the Skeleton Cat. 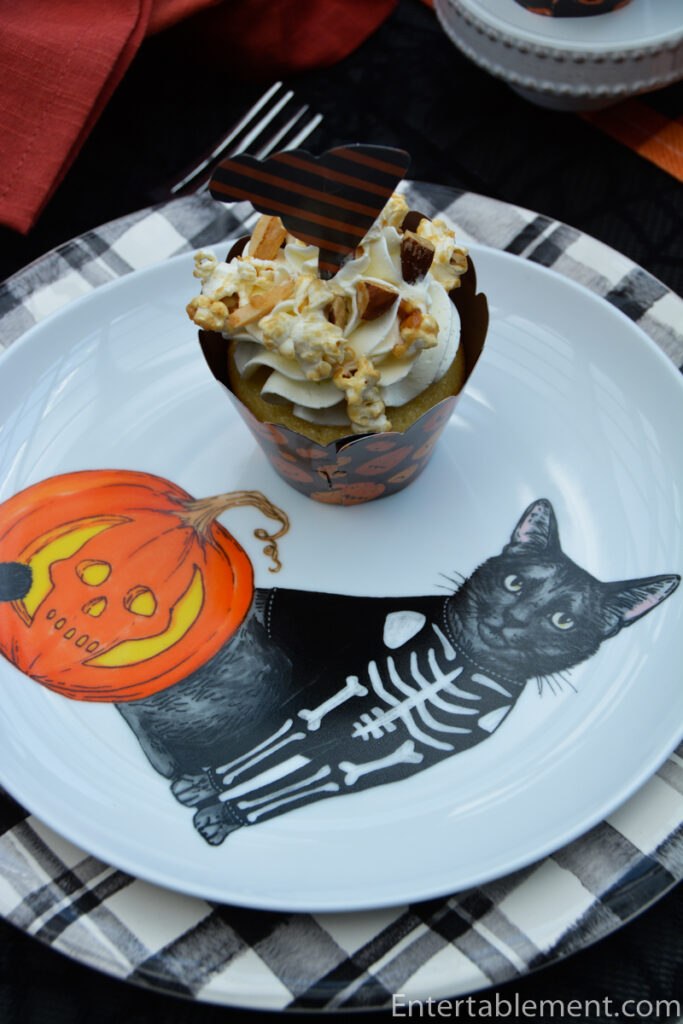 Black and orange are traditional Halloween colours and seemed a good starting place to unify the two sets of plates. I’ve long had the black twig cutlery, and napkin rings from World Market. The orange napkins are a Pier 1 find. So far, so good. 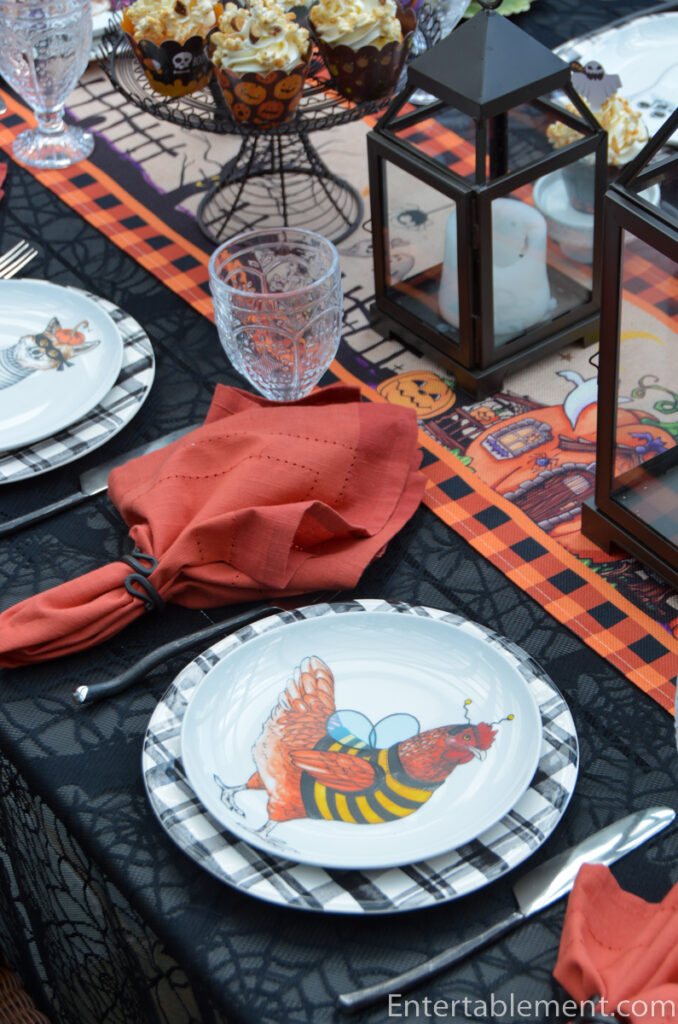 A black cobwebby tablecloth with an orange and black gingham-edged runner formed the base. You can see I had a helper with this table. I think Moxie was afraid I’d slap a costume on her, so she kept herself well hidden under the table. 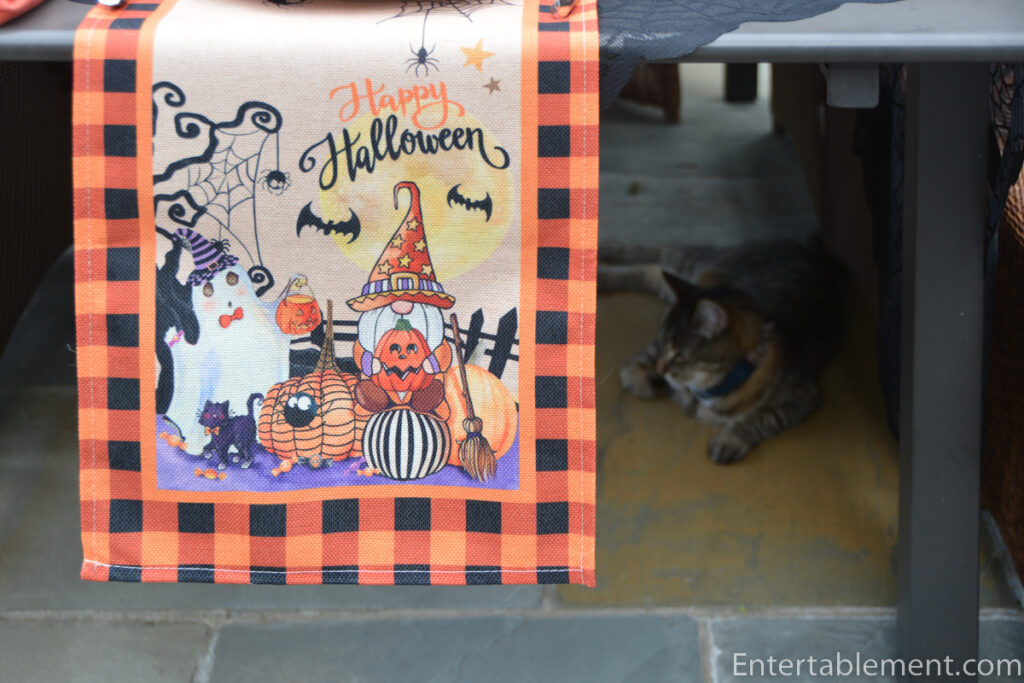 The pumpkin cups and saucers are from Maryland China, several years ago. With all that colour and visual activity, I stuck with clear glasses: Trestle by Fitz and Floyd. 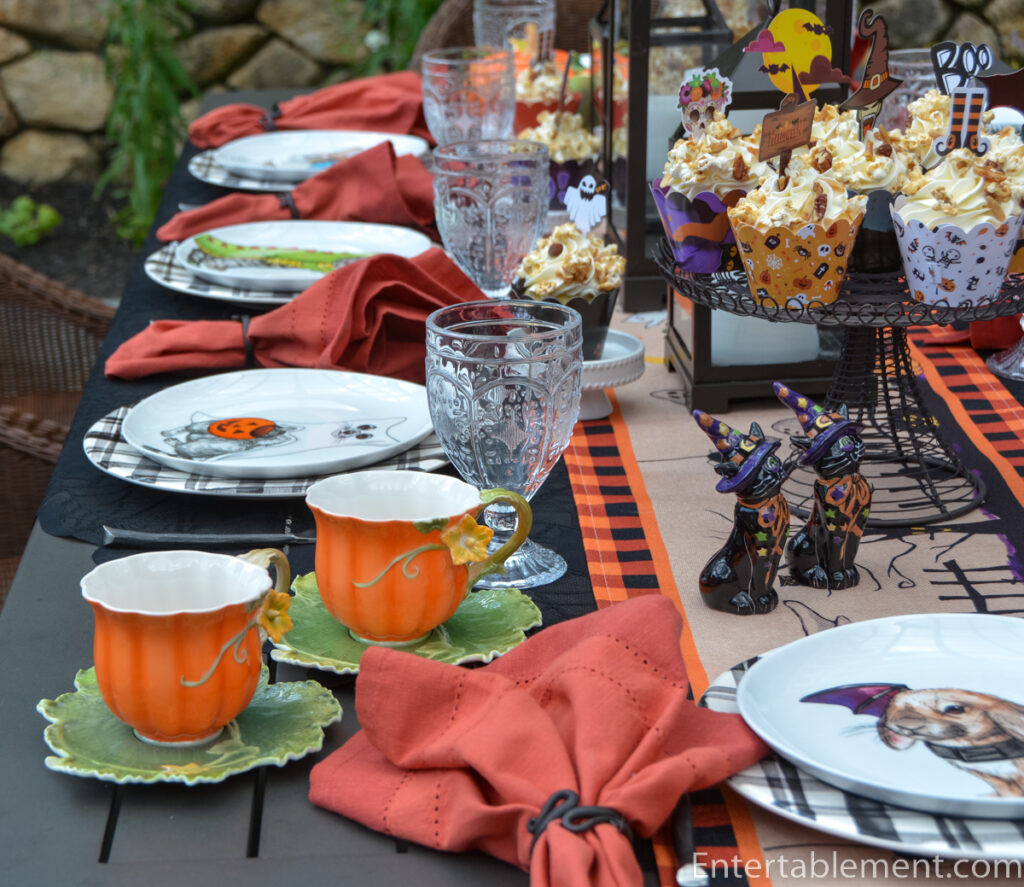 Black cat and pumpkin salt and pepper shakers accompanied the Maryland China pumpkin teapot, cream and sugar from the same series as the cups and saucers. 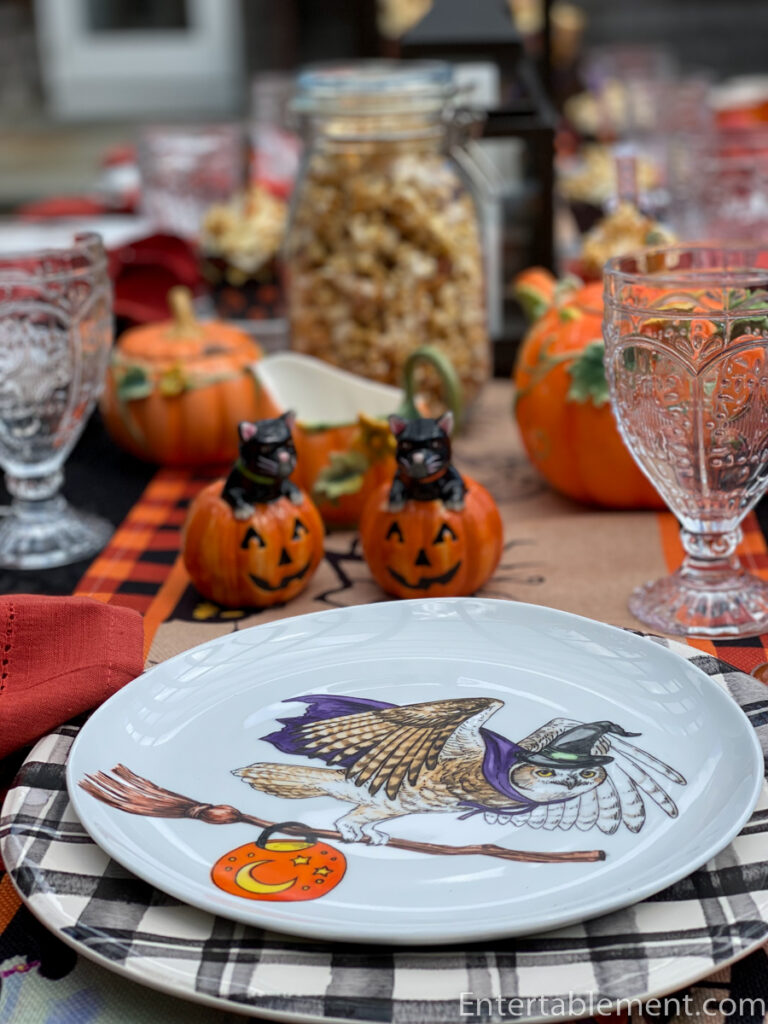 And another set of black cat salt and pepper shakers came out to play. 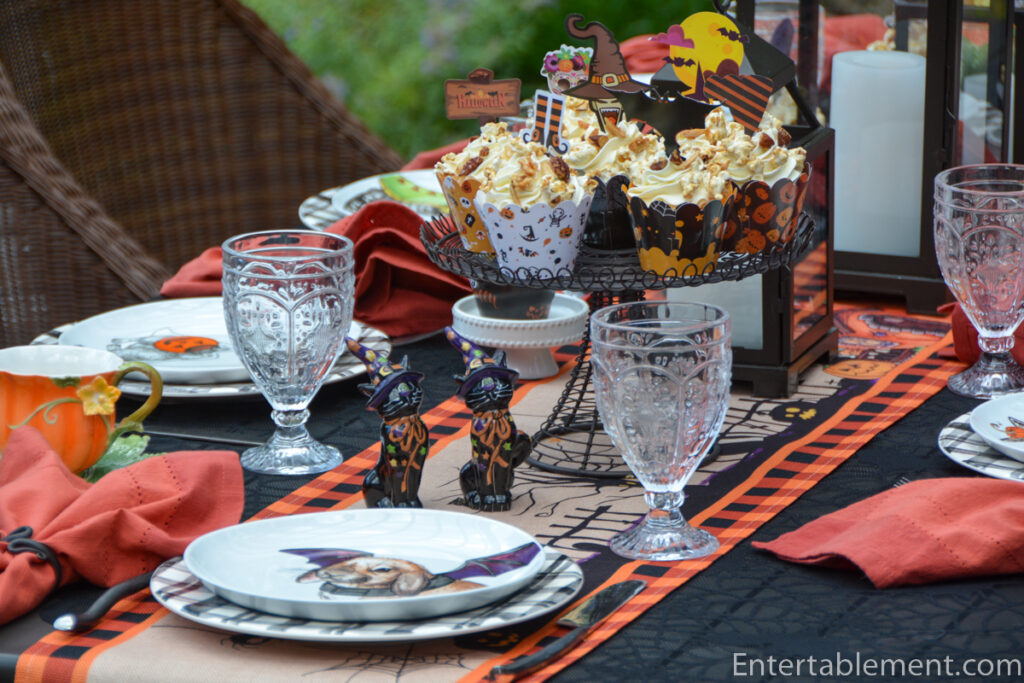 Halloween is all about trick or treating, though. First, we needed treats, so I settled on Golden Cupcakes with Homemade Poppycock topping. The cupcake wrappers added the final festive touch. 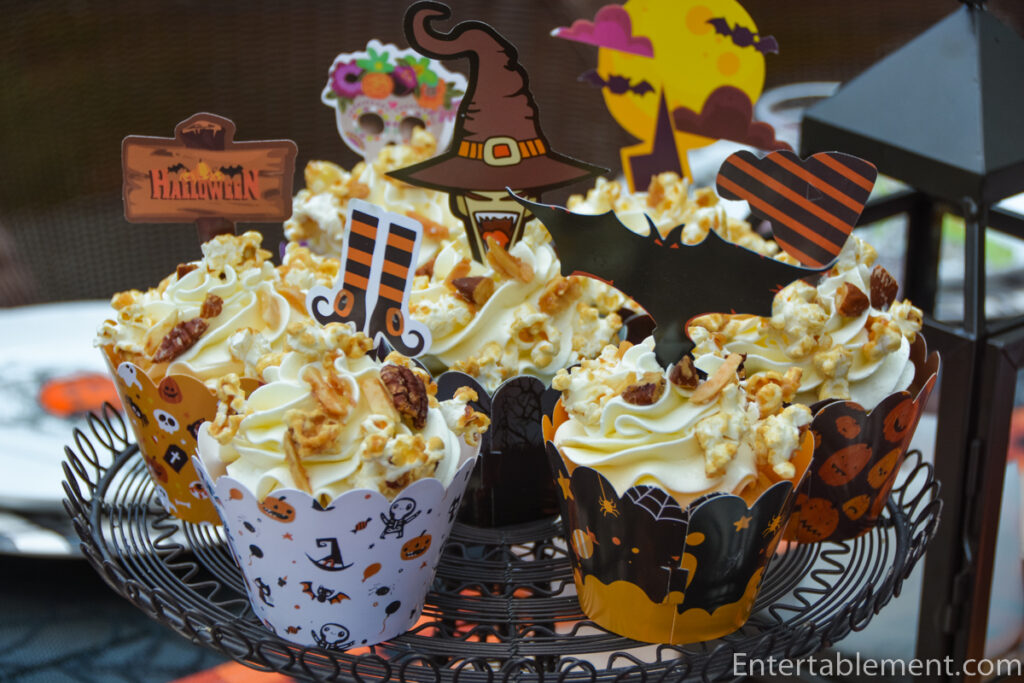 There was a massive variety in the kit, from witches’ stockings and hats… 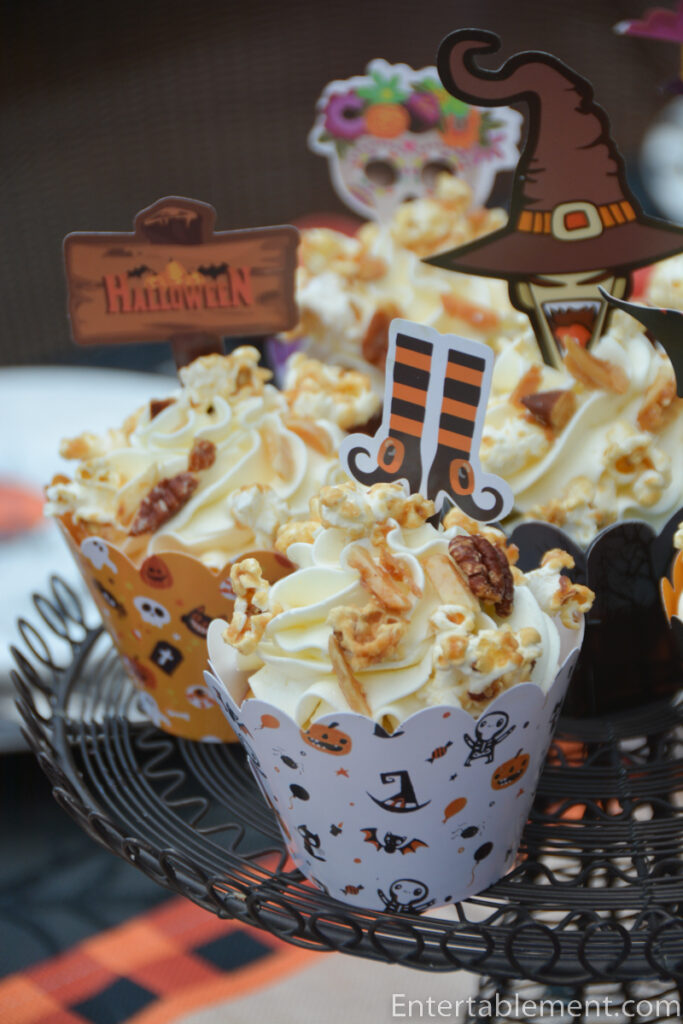 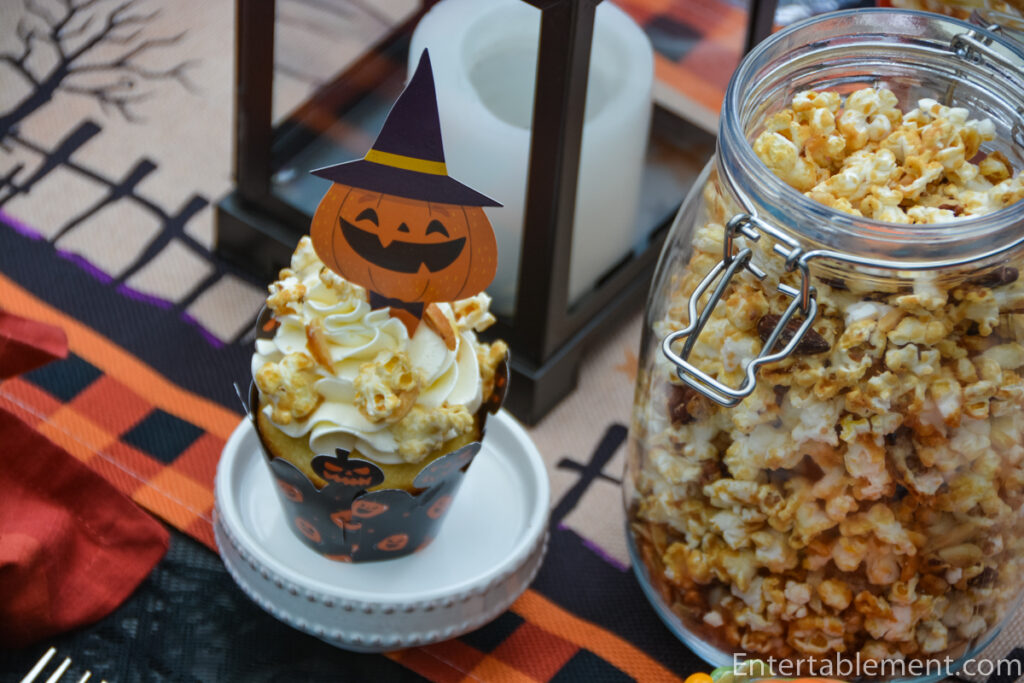 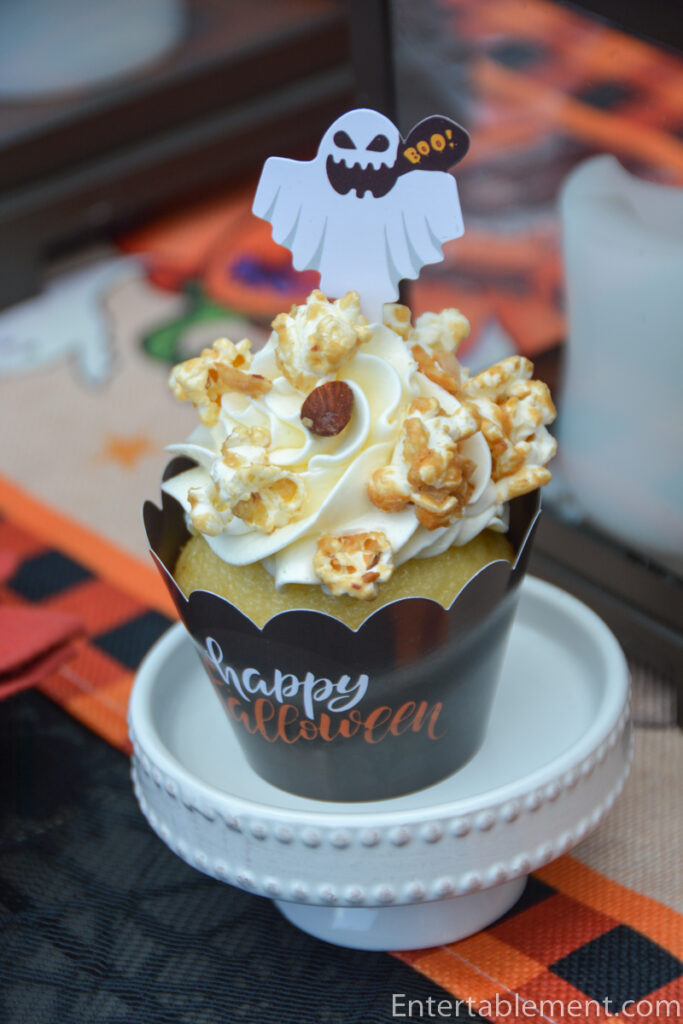 All set for a fun and not-so-spooky evening.