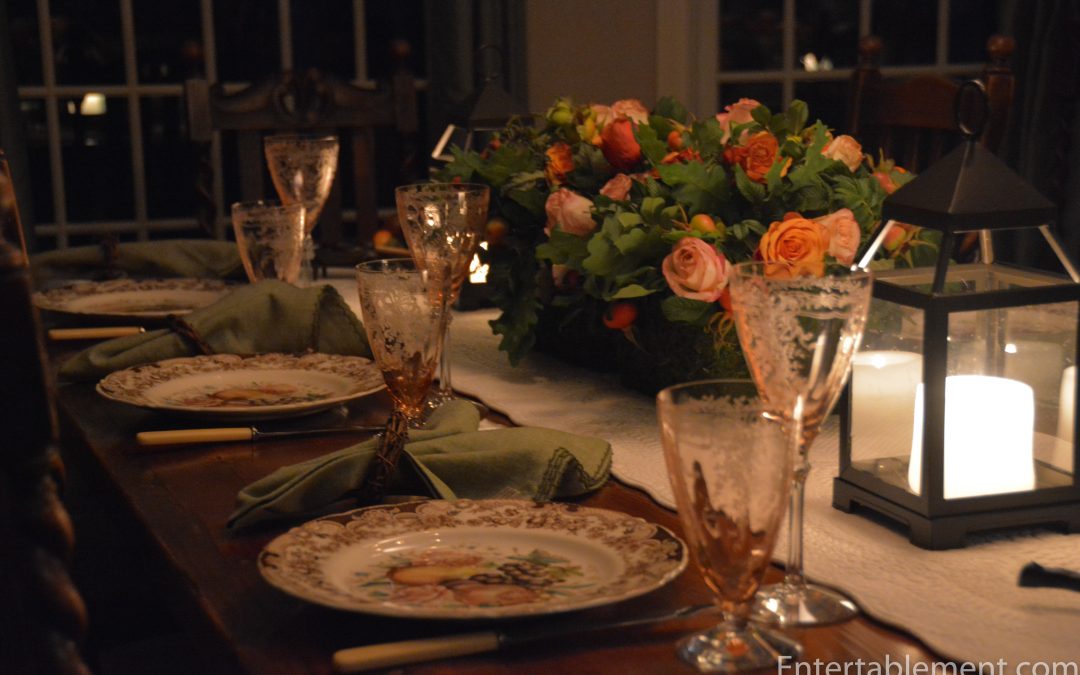 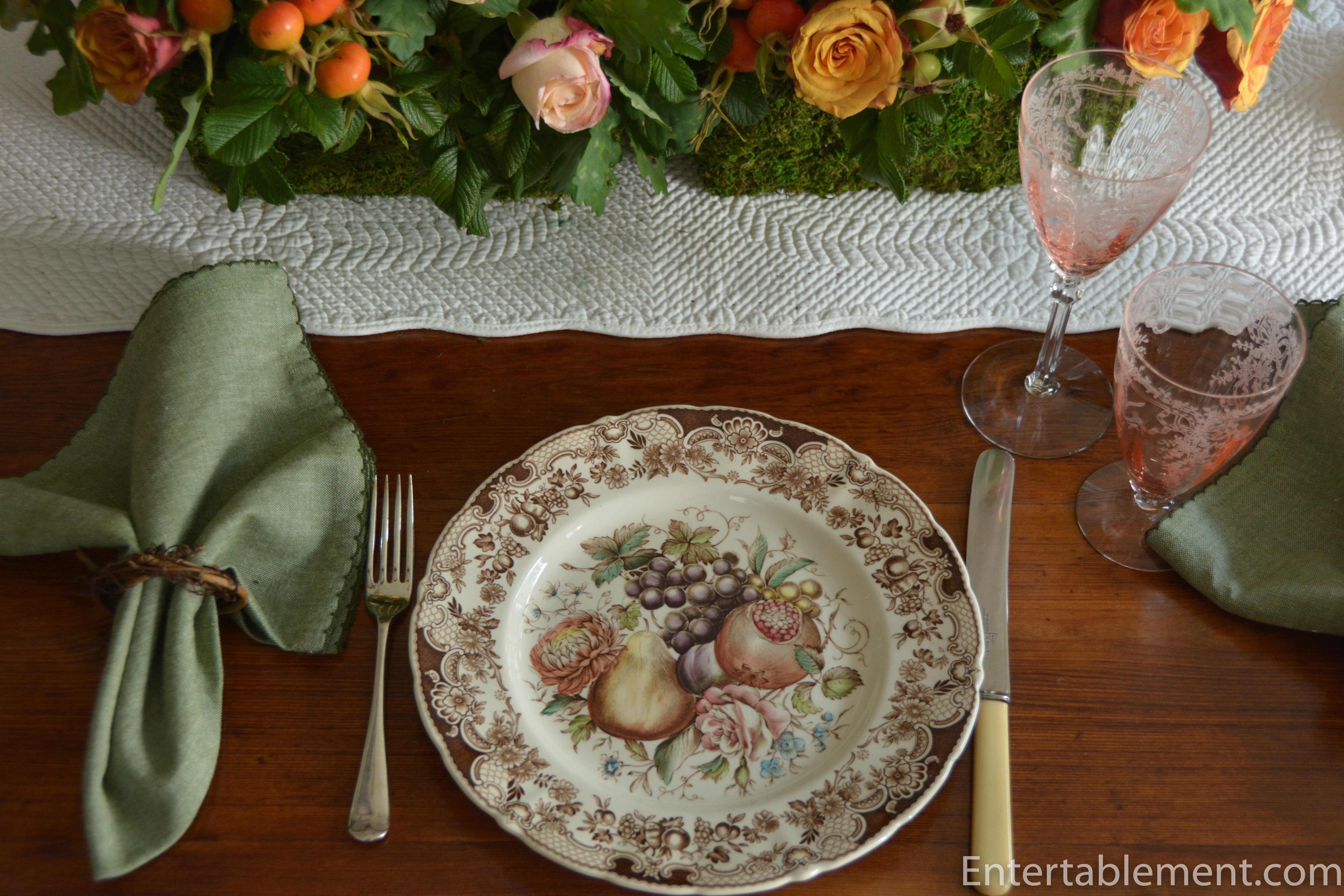 I’ve not been a collector of brown transferware until recently, and this pattern was one of the first that I acquired. I was attracted to the detail on the shoulder of the plate, the peachy tones and exquisite rendering of the fruit in the centre. 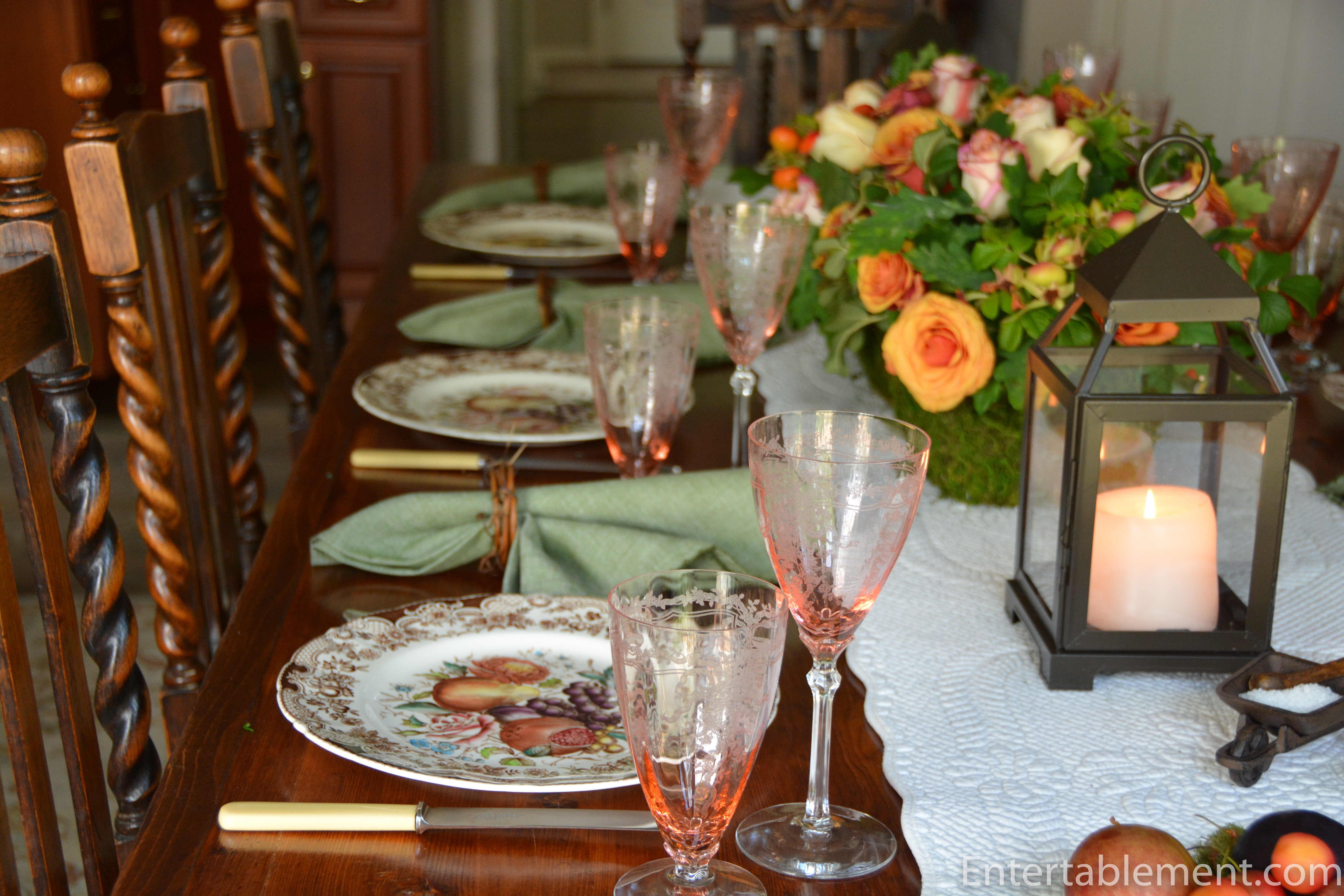 It’s part of the series of “Windsor Ware” made by Johnson Brothers. According to Replacements, the pattern was produced between 1960 and 1965, just before they gained recognition with the issuance of royal warrants from both from their Majesties Queen Elizabeth and Queen Elizabeth, the Queen Mother in 1970. I haven’t been able to get much intel on the significance of Windsor Ware, but suspect it is not unrelated to the Royal connection that resulted in the warrants being issued. :). 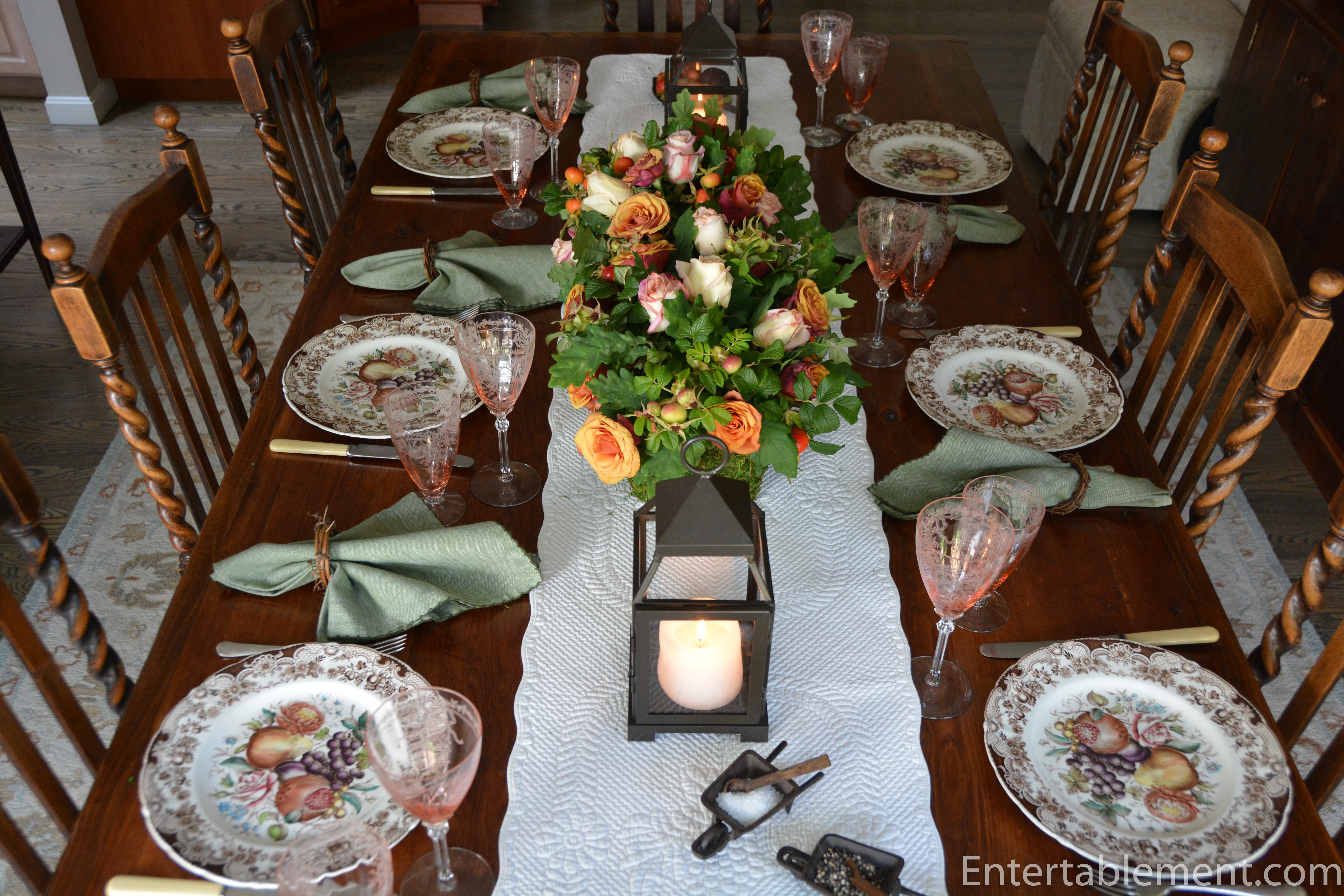 Johnson Brothers are a well-known and well-loved manufacturer, famous historically for developing a “semi-porcelain” whiteware which had the characteristics of fine china, but the durability of ironstone. 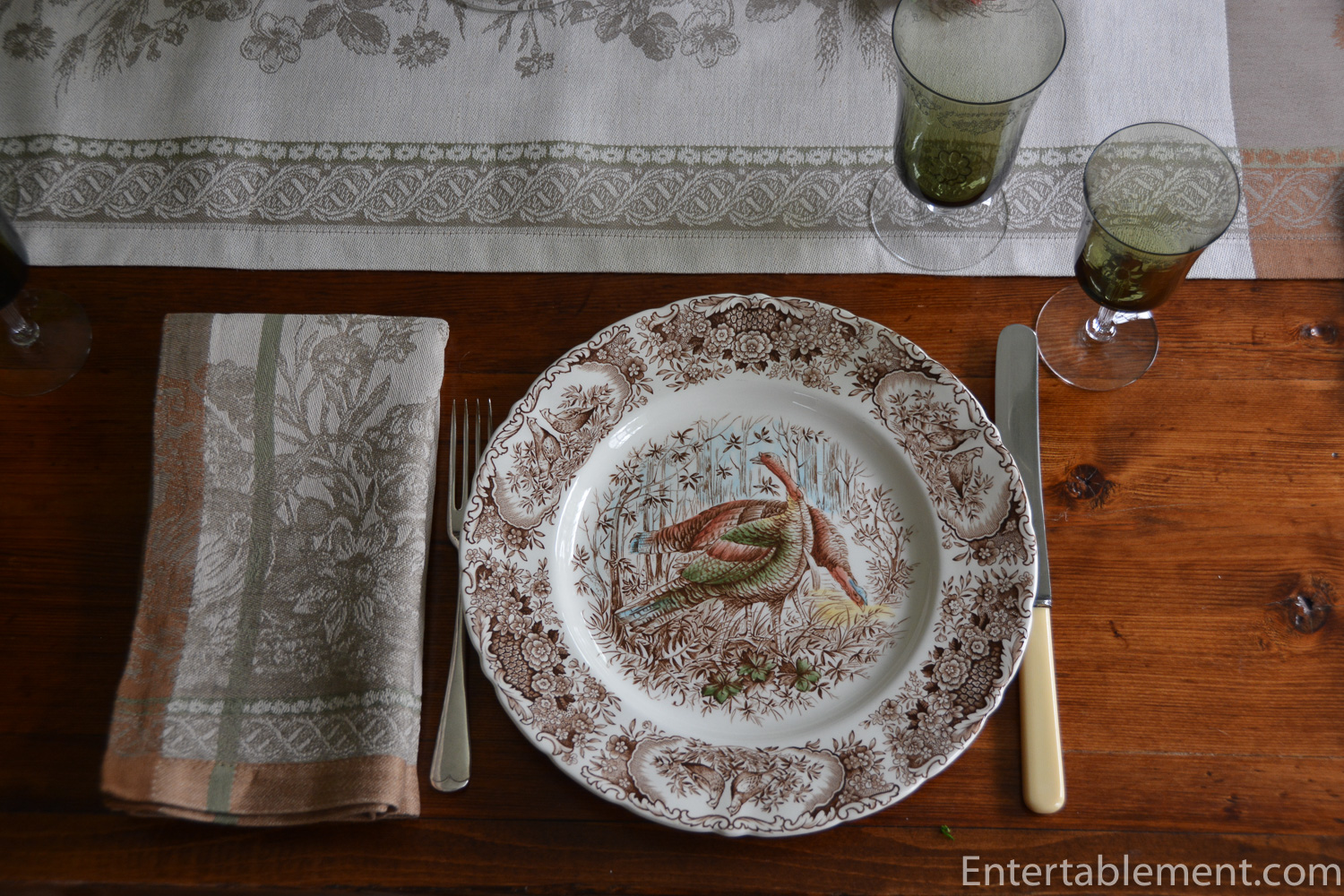 They’re probably best known now for all their lovely turkey patterns (Spoiler Alert: including Wild Woodland Turkeys, shown above, which is the subject of an upcoming blog) and Old Britain Castles. 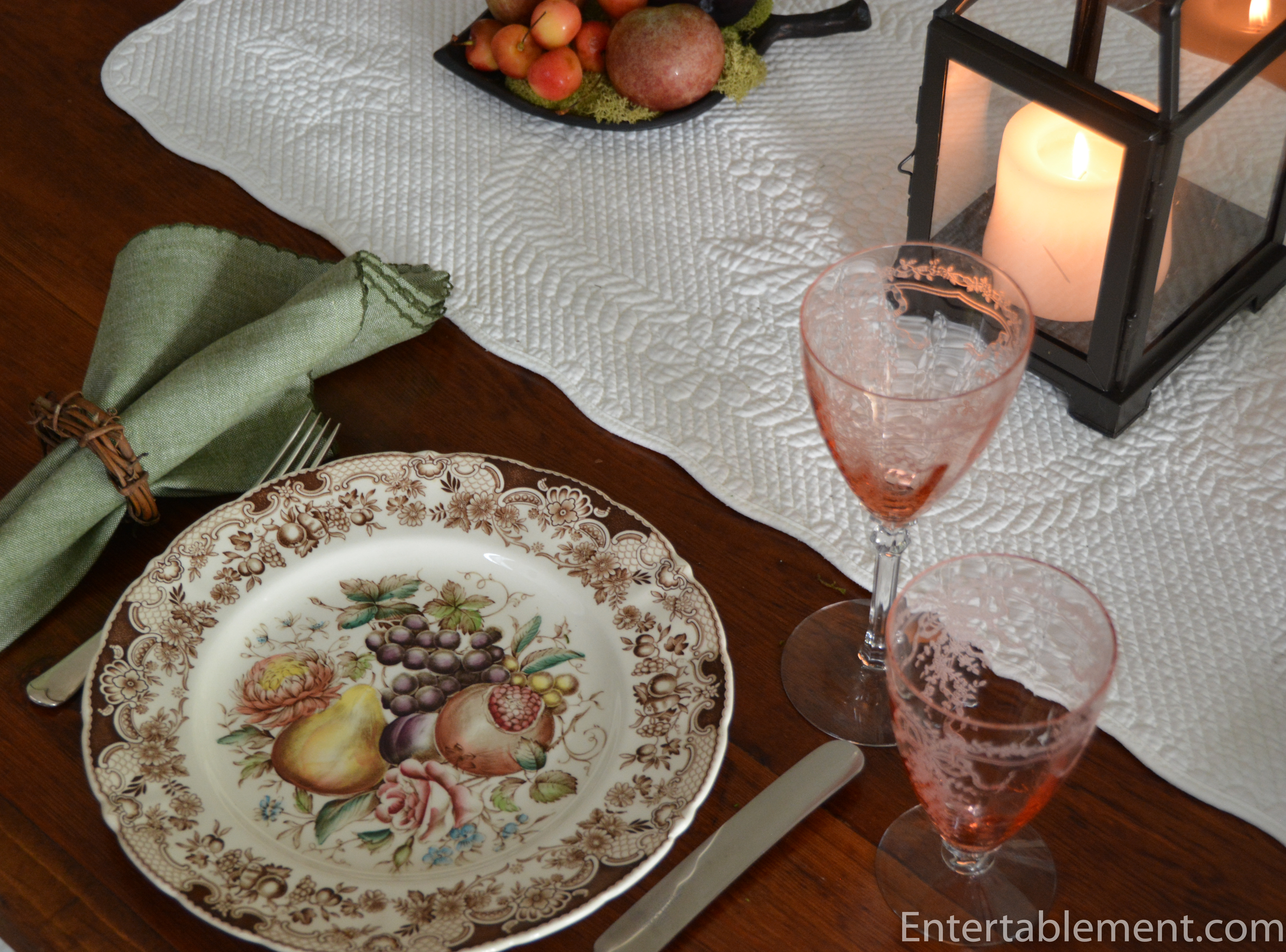 Now owned by Wedgwood, a member of the fourth generation of the Johnson family, Christopher Johnson, is on the board of the main Wedgwood company. Who says kids don’t want to enter their parents’ professions? 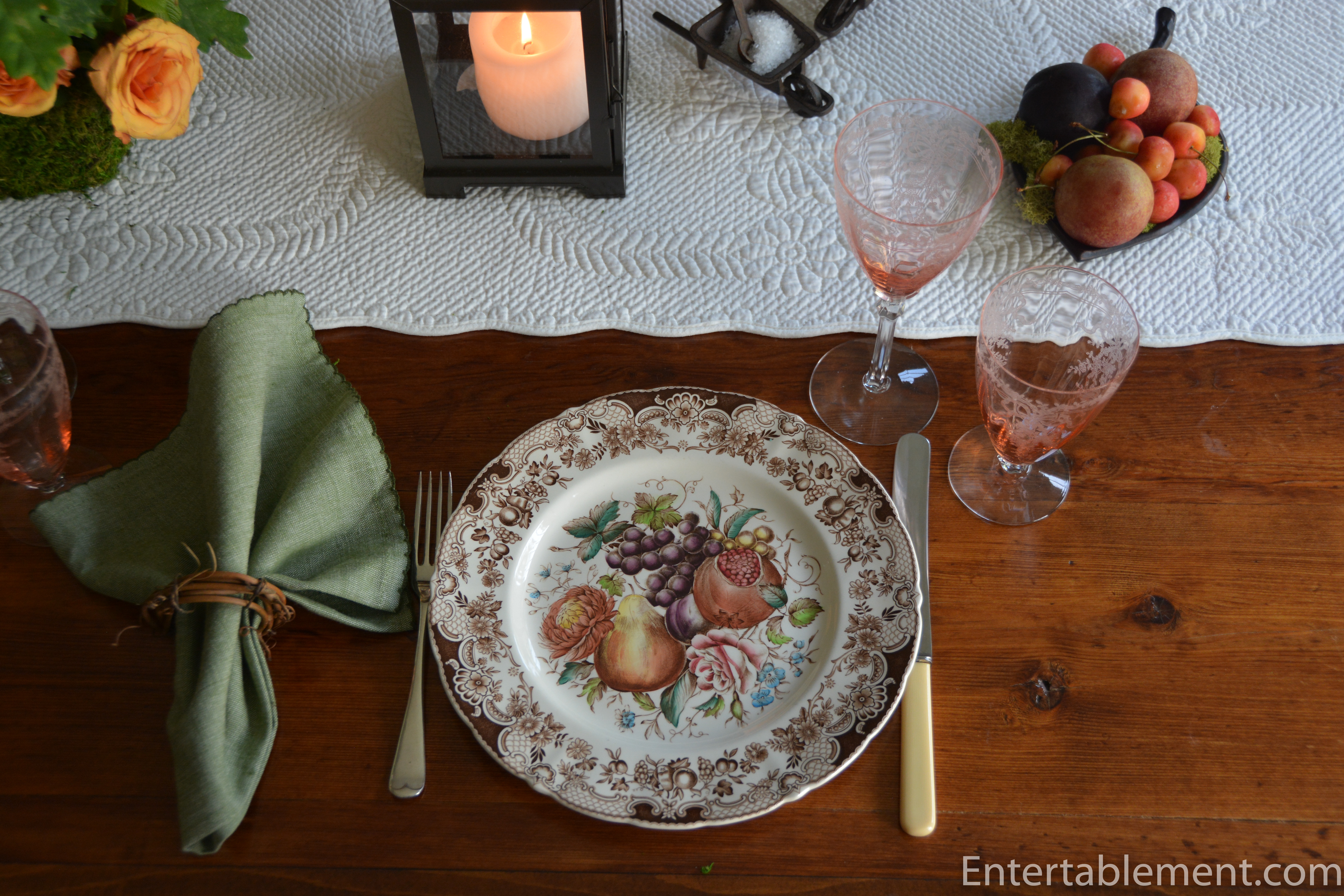 On to the table:  I styled it with a cream quilted runner I’ve had forever, and new green chambray napkins from Pier 1. The cutlery you’ve seen a million times if you’re a reader of this blog; it’s part of a canteen set of vintage bakelite handled silverware that I bought many years ago. 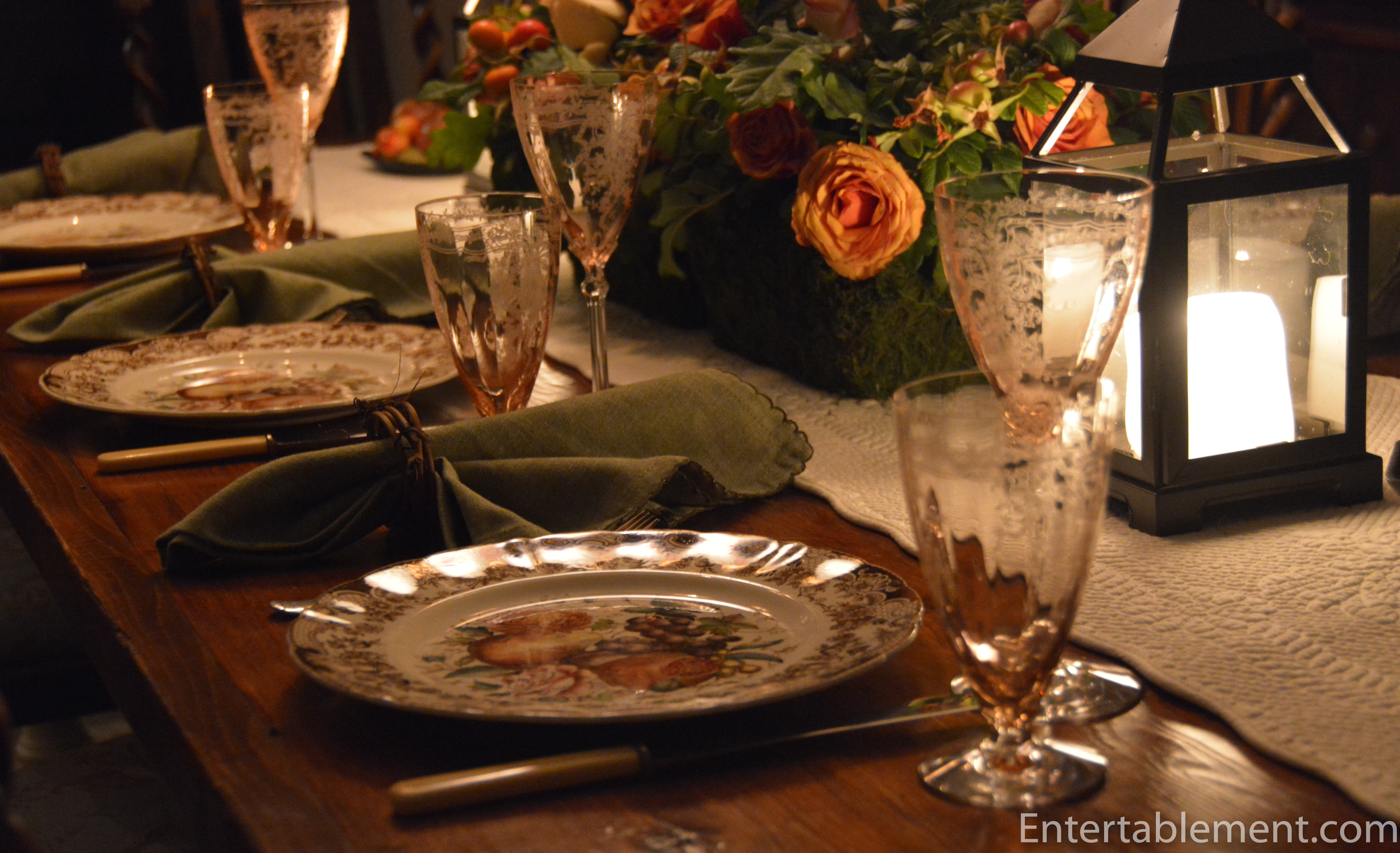 The glasses are June Pink by Fostoria, an “elegant glass of the Depression Era”. Shown here are the water glasses (used for wine) and the iced tea glass (used for water). 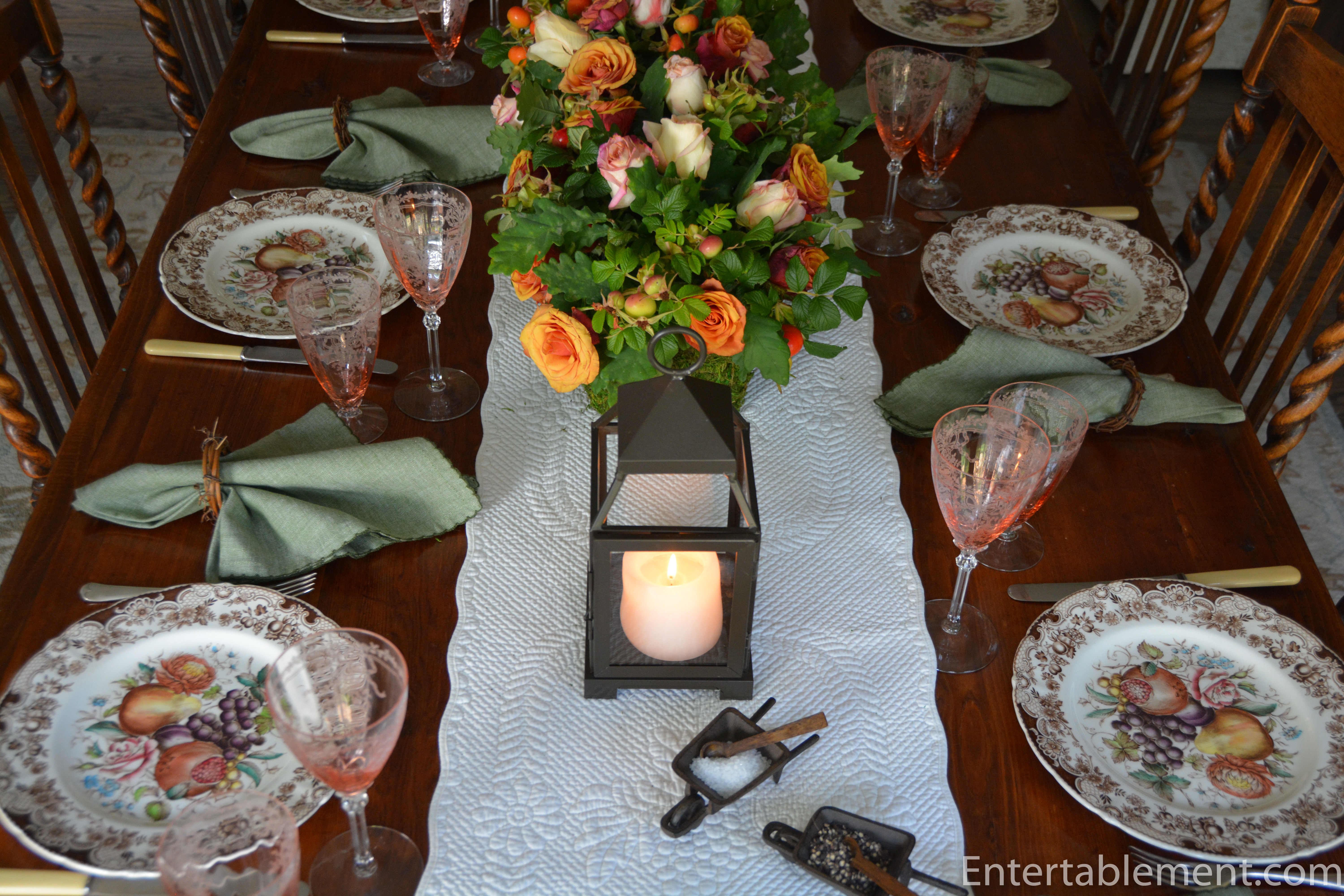 The Malta lanterns are from Pottery Barn, several years ago, though still available. 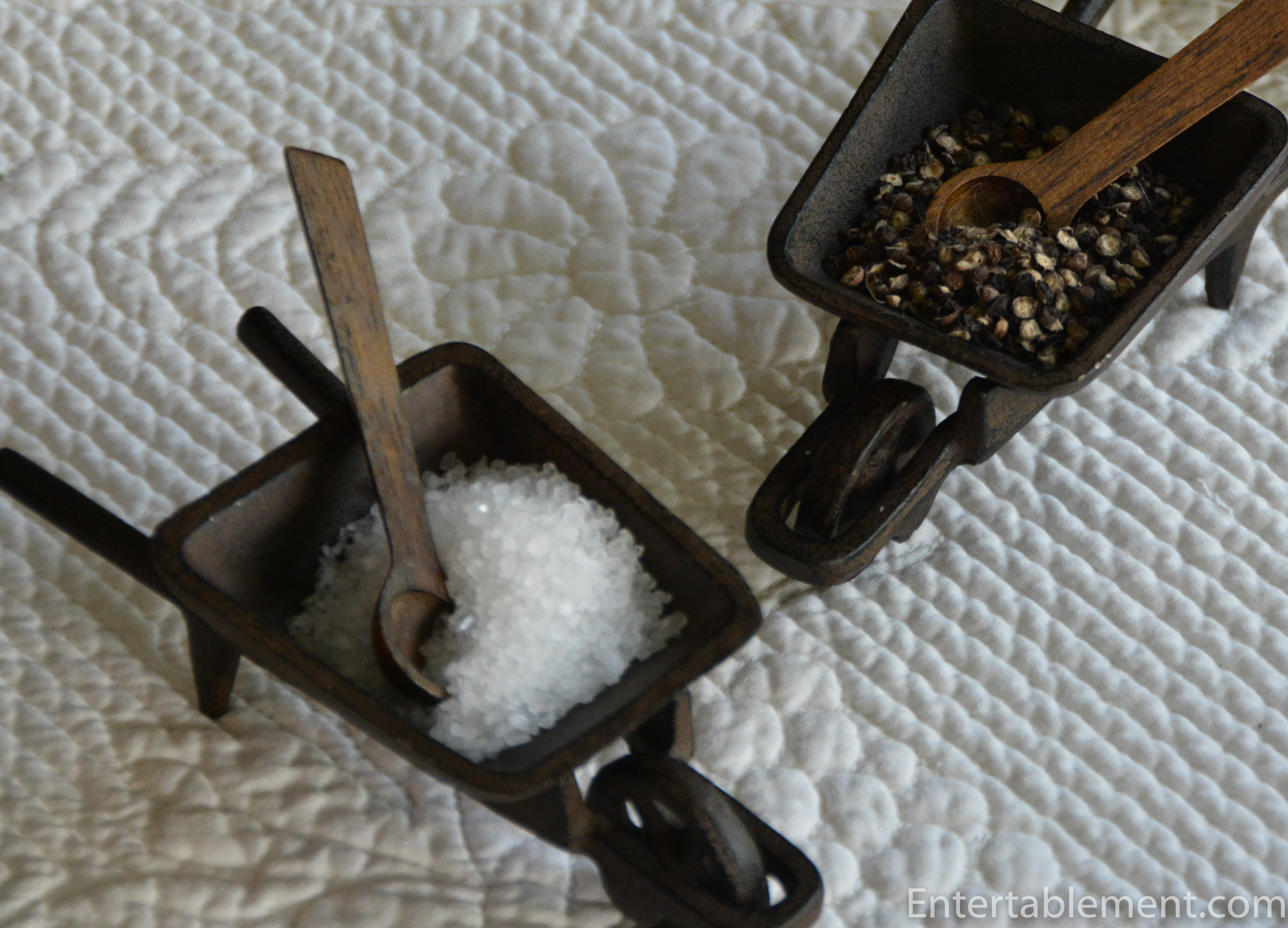 The wheelbarrow open salts are also from Pottery Barn, no longer available. 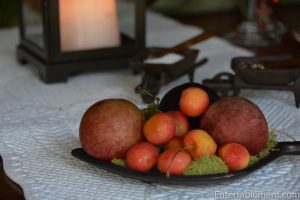 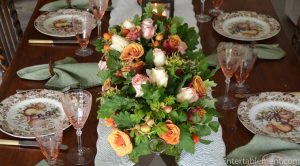 Centrepiece made with oak leaves, beach plums and some tawny coloured roses

In honour of the pattern name, I gathered some cherries and plums together on small leaf shaped dishes, and picked up the colours of the fruits in a centrepiece of oak leaves, beach “plums” (large rose hips, really) and apricot roses from Trader Joe’s. 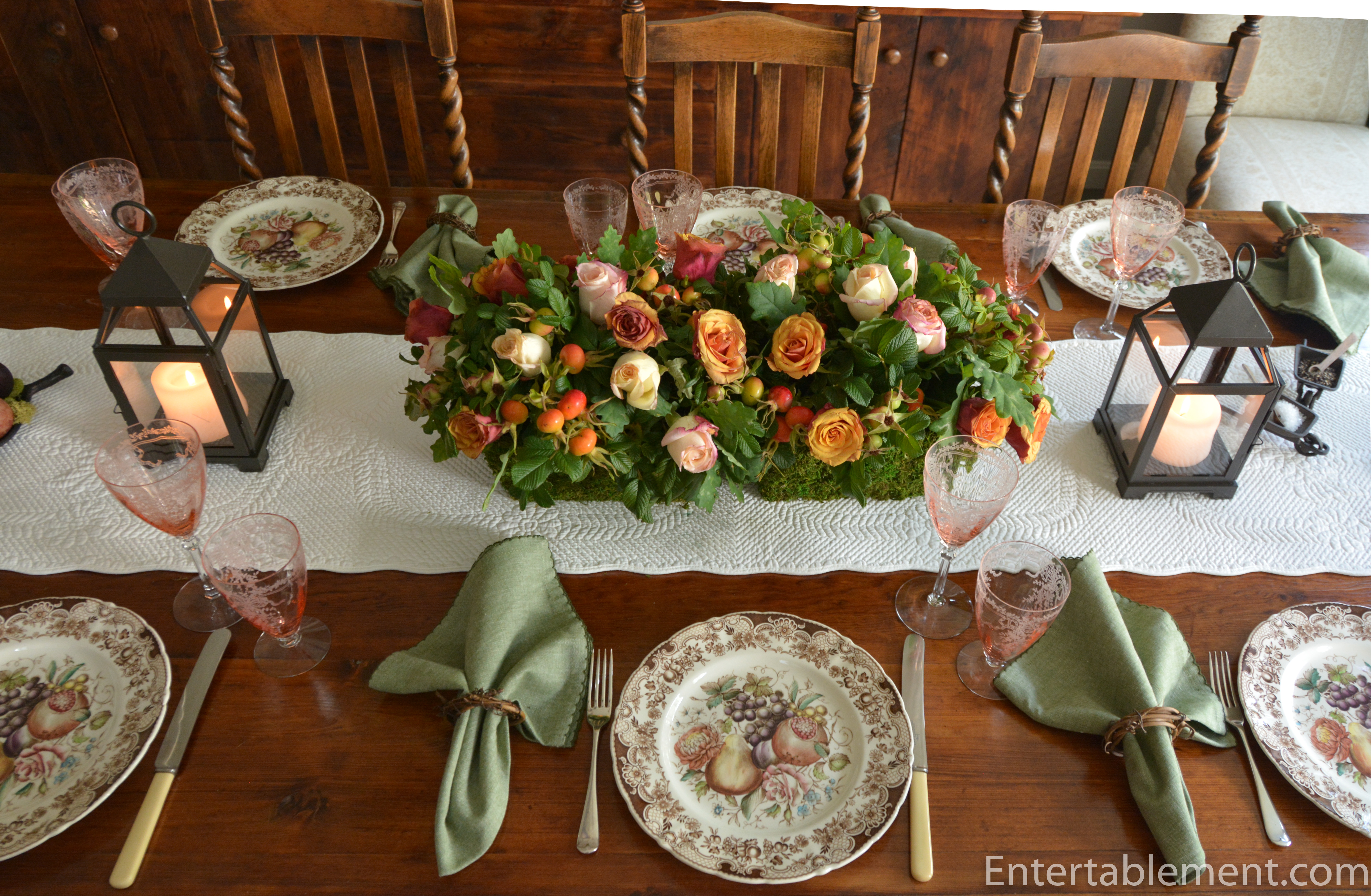 Thanks for joining me on the Johnson Brothers’ mini-tour! 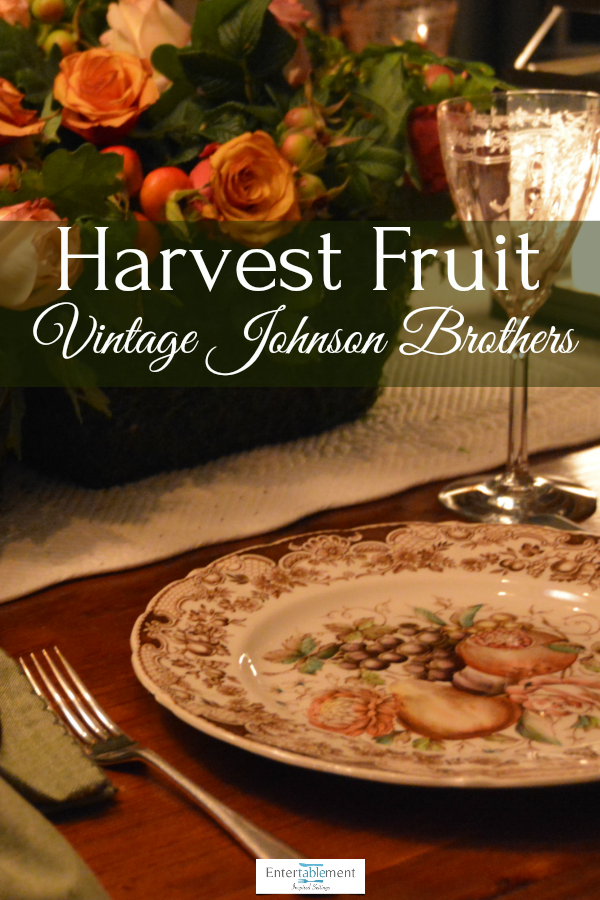