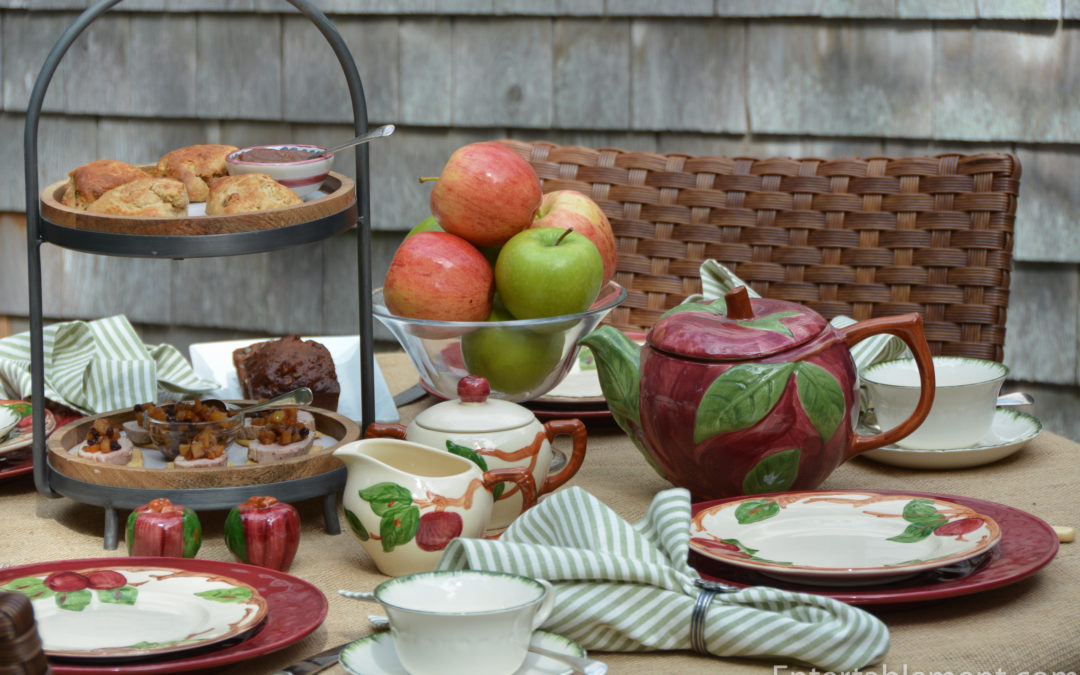 Perhaps in anticipation of our trip to England, I began thinking about the delights of tea time. With fall approaching, apples naturally elbowed their way into the picture, too. Voila.  Apple Tea Time! 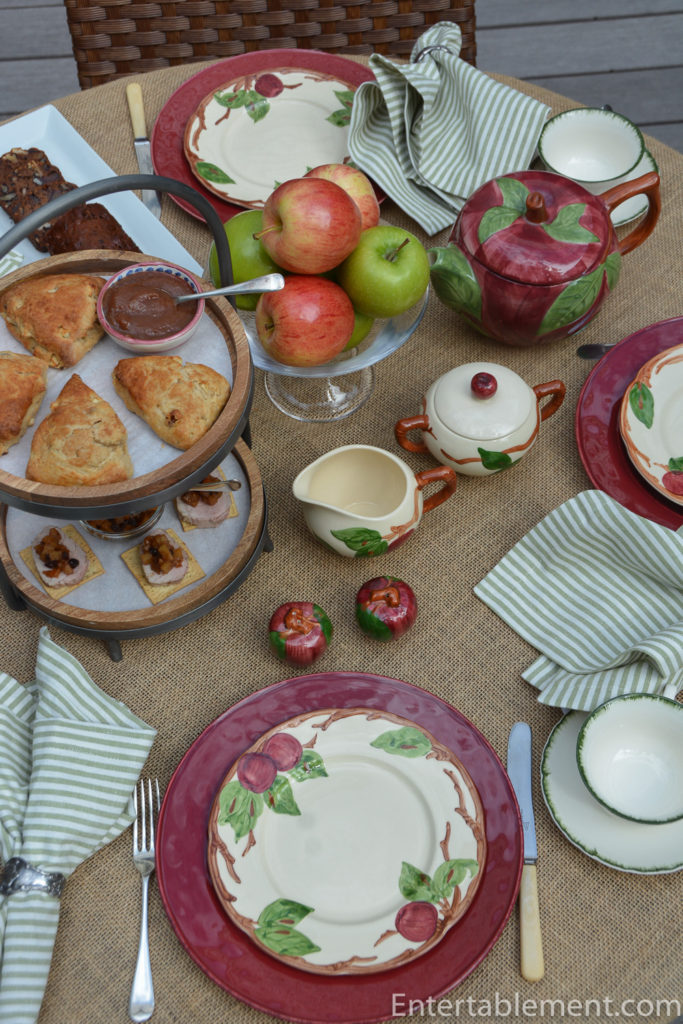 With scones and savouries and a personal favourite from childhood, Date Nut Loaf. What shall we cover first, the table setting or the goodies? I’m hungry – let’s go for the goodies. 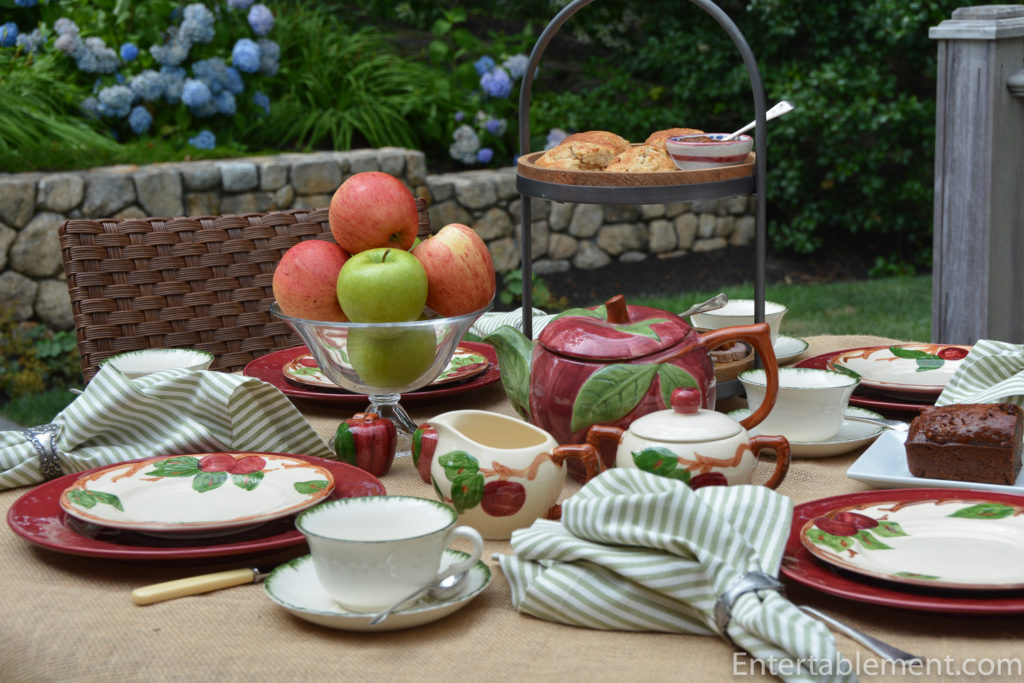 I had some pork tenderloin left over from dinner the night before, so I simply sliced it and served it on square crackers, topped with Apple Chutney (I usually have a jar of it on the go in the fridge, as we prefer it to applesauce). Quick and easy. 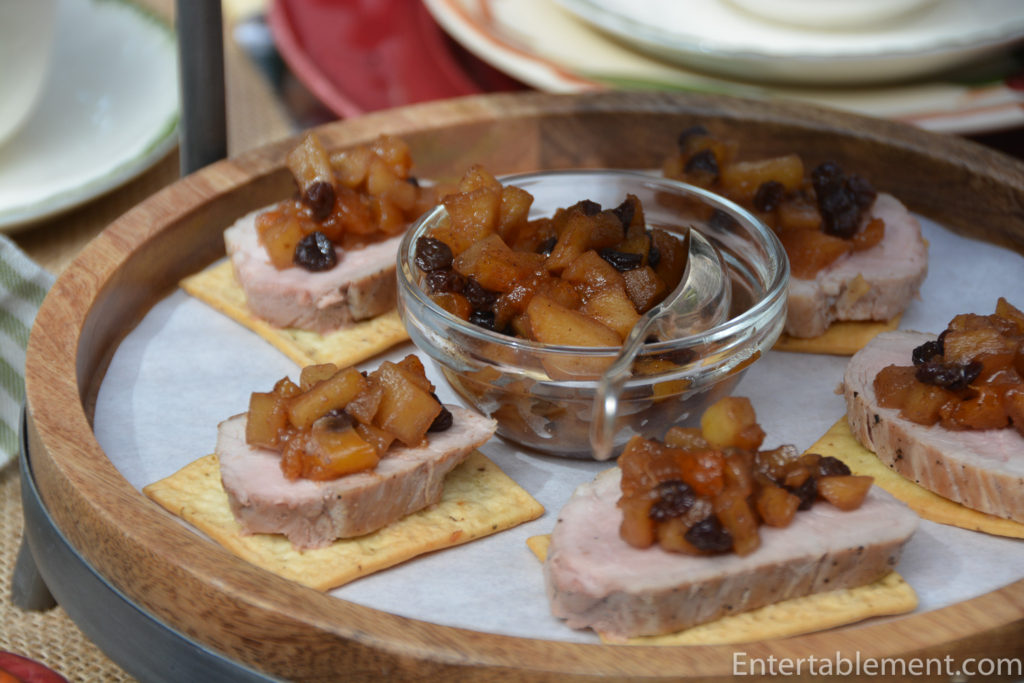 The Date & Nut Loaf is a more refined version of the tinned Crosse & Blackwell stuff I used to delight in as a child. Does anyone else remember that delicacy? It used to come in a tin and needed to be shaken from its surroundings, landing on the plate with a satisfying plop. Slice, slather with butter and serve. 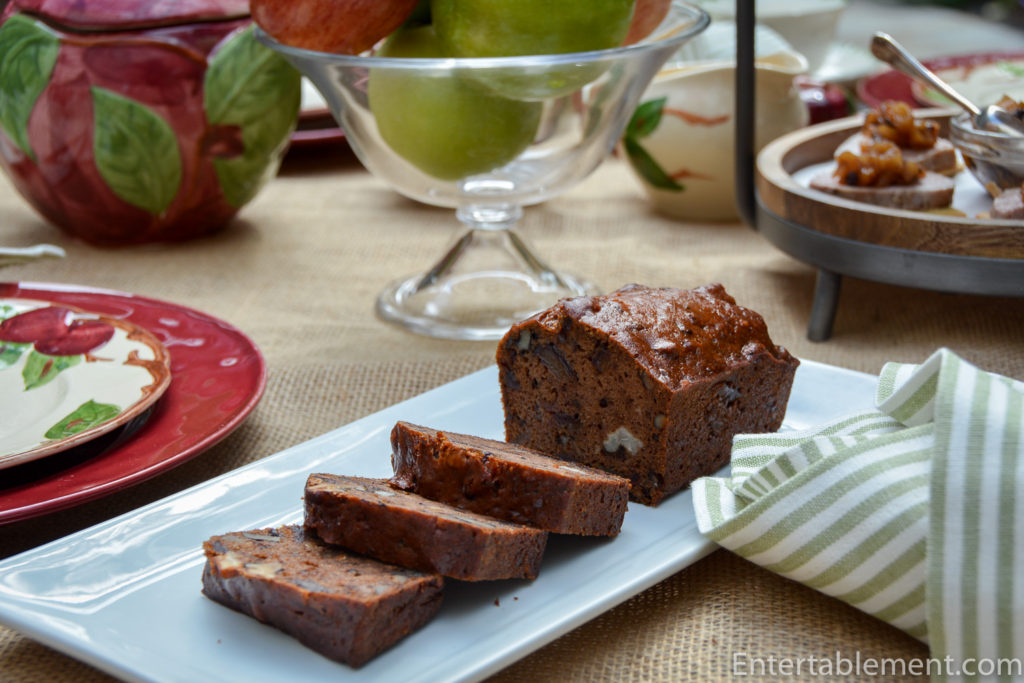 Nowadays, I prefer to make it from scratch and usually bake three small loaves rather than one large one, with two destined for the freezer and one for immediate consumption. It’s moist and delicious, as part of a full-blown tea, or just on its own with butter or a chunk of cheddar cheese. 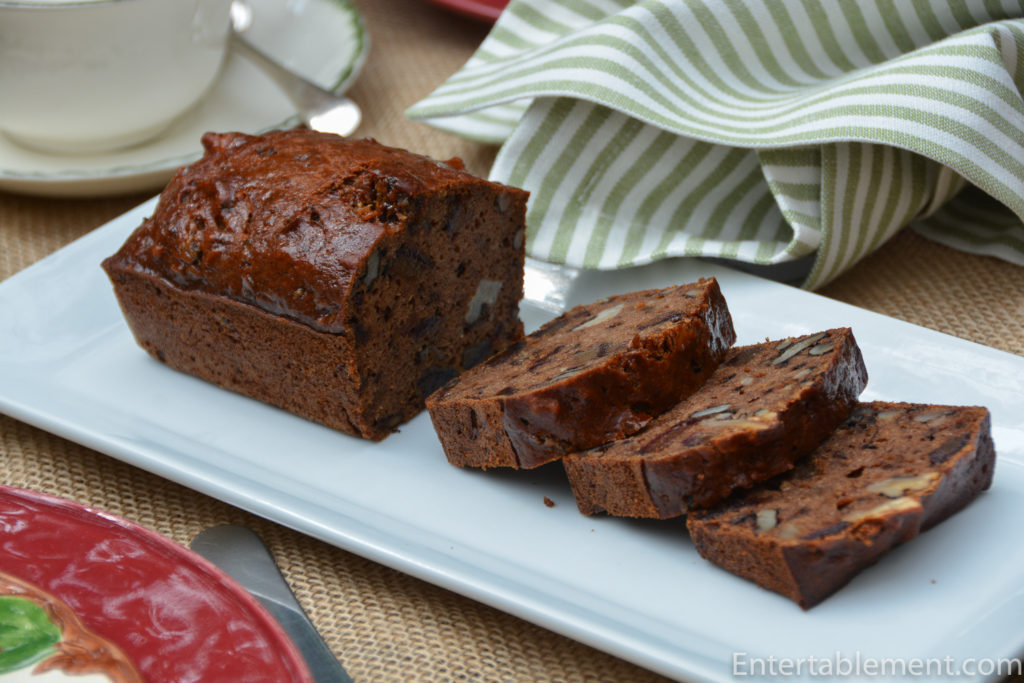 Lastly, we have the Apple Cinnamon Scones. I served them here with apple butter, which I procured from Amazon after failing to find it in grocery stores or at Trader Joe’s (where the woman looked at me as though I had two heads for asking for it in August). 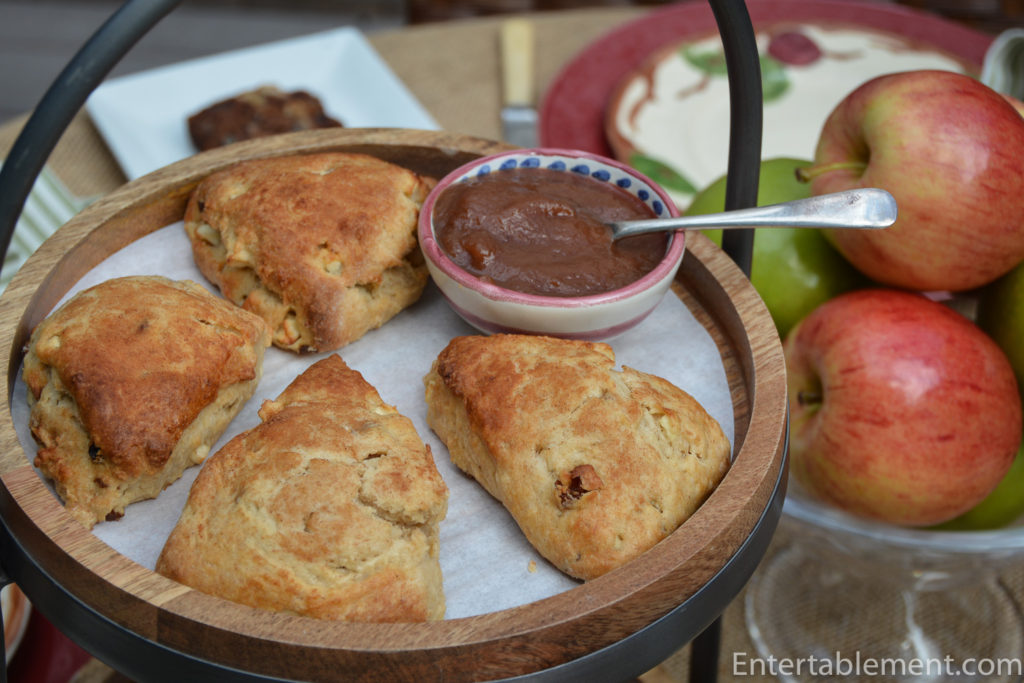 On to the table, then. The main pattern is an old-fashioned favourite, Apple by Franciscan. Readily available at Replacements or on eBay, it’s described thusly by Replacements:  “Introduced in 1940, Franciscan Apple is a beautiful earthenware pattern featuring hand-painted designs that reflect the beauty of California’s apple orchards. Apple looks great year-round, and pieces from this pattern make impressive gifts for vintage tableware collectors!” 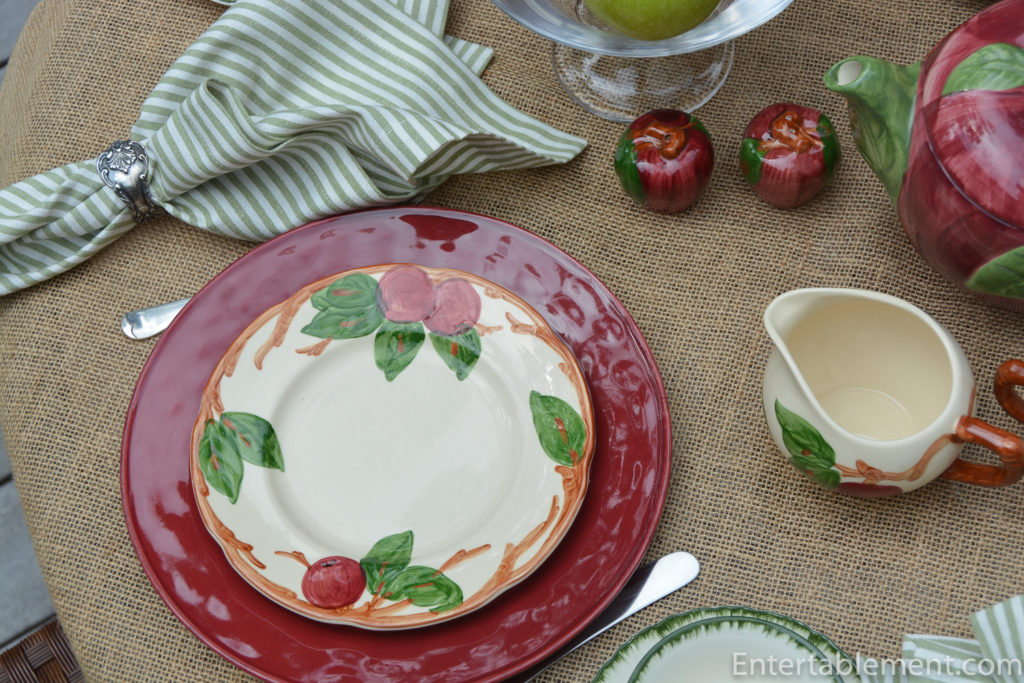 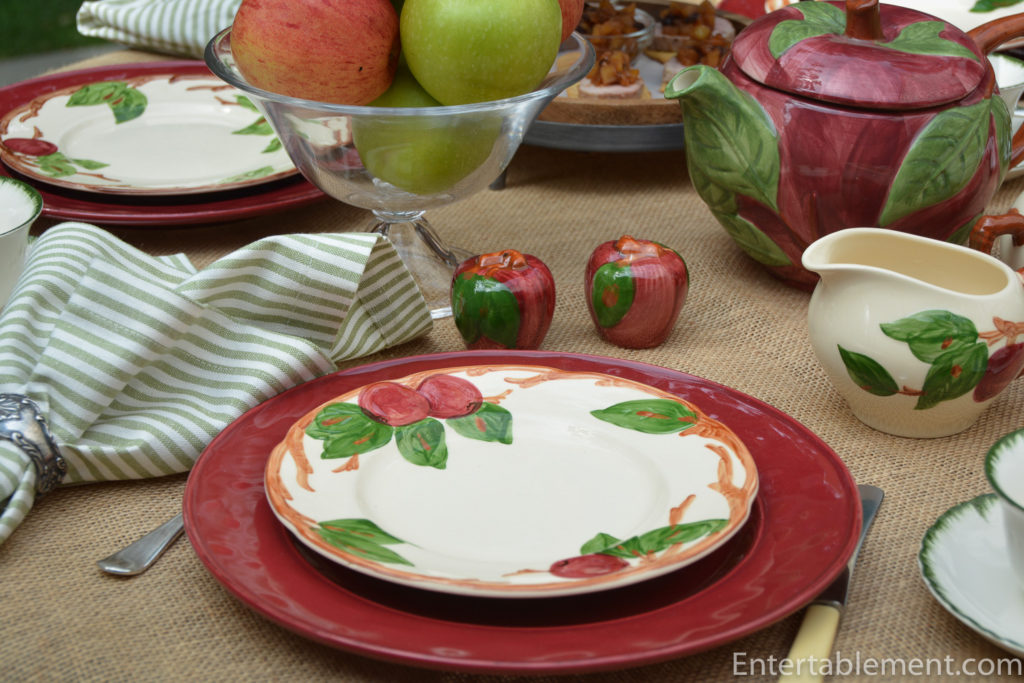 I combined Apple with Martillo Wine dinner plates from Pier 1 (discontinued) and Wedgwood Colonial Williamsburg Shell Edged in green (an eBay find) for some variety, as I thought Apple on its own could be a bit overpowering. 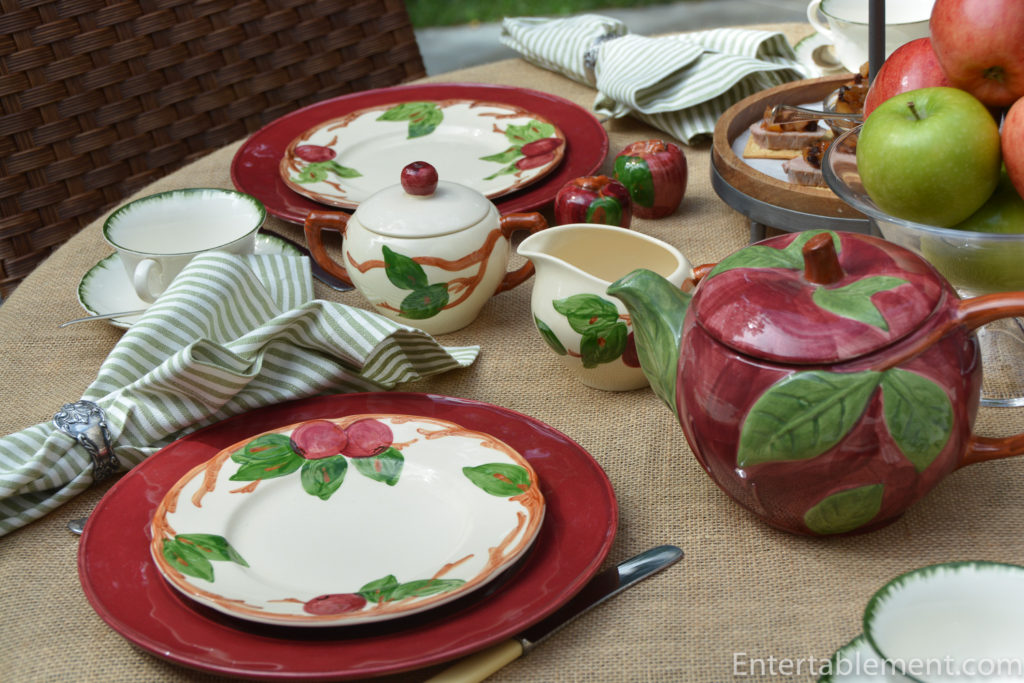 The Apple plates are homey and inviting, with folksy apples and leaves and twig-like edging. Very heartwarming and appealing. 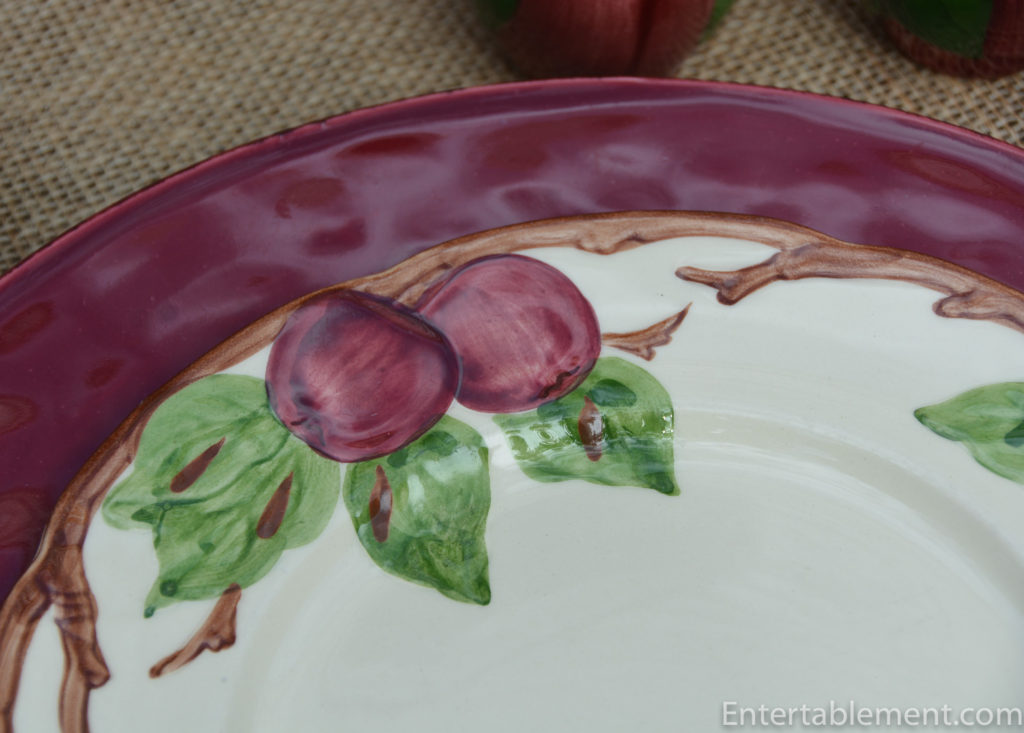 Apple has a wide variety of serving pieces, from the apple-shaped red teapot to the more traditional cream and sugar. 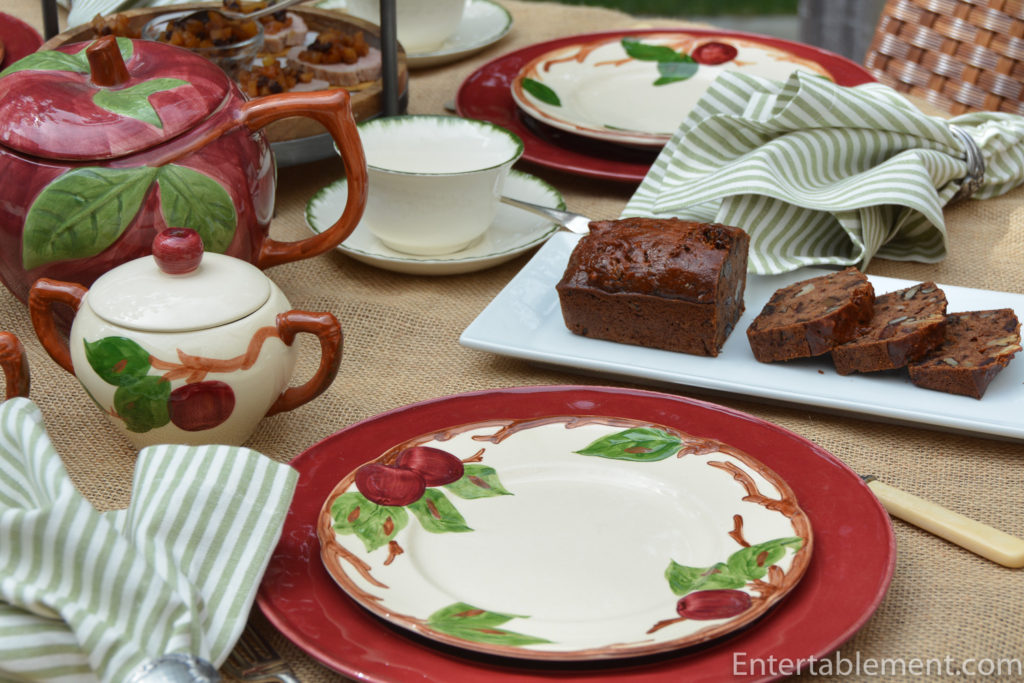 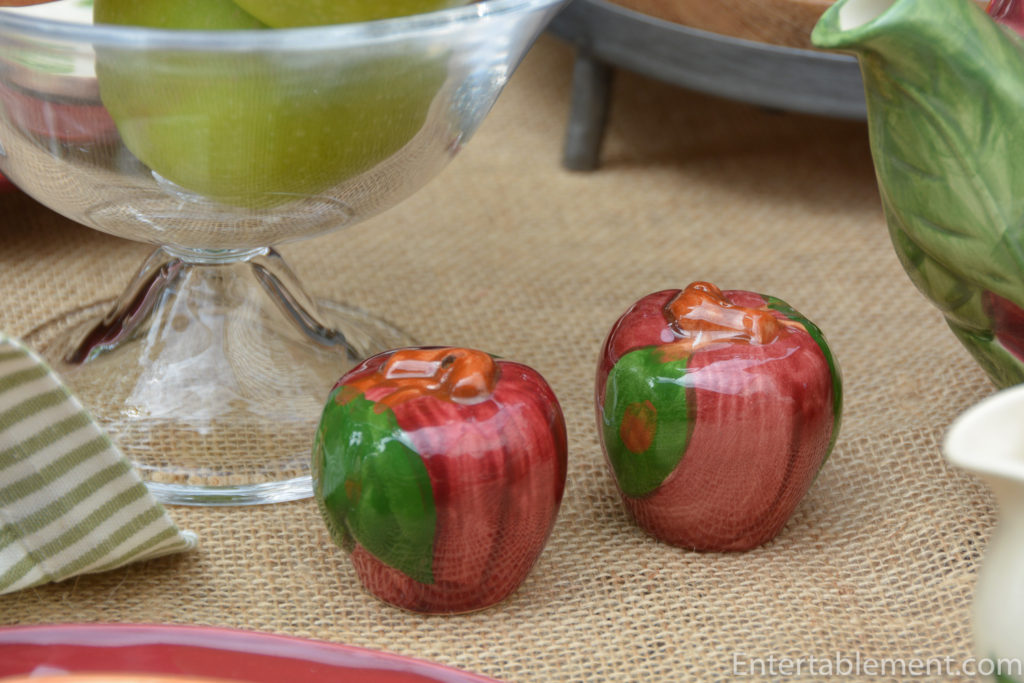 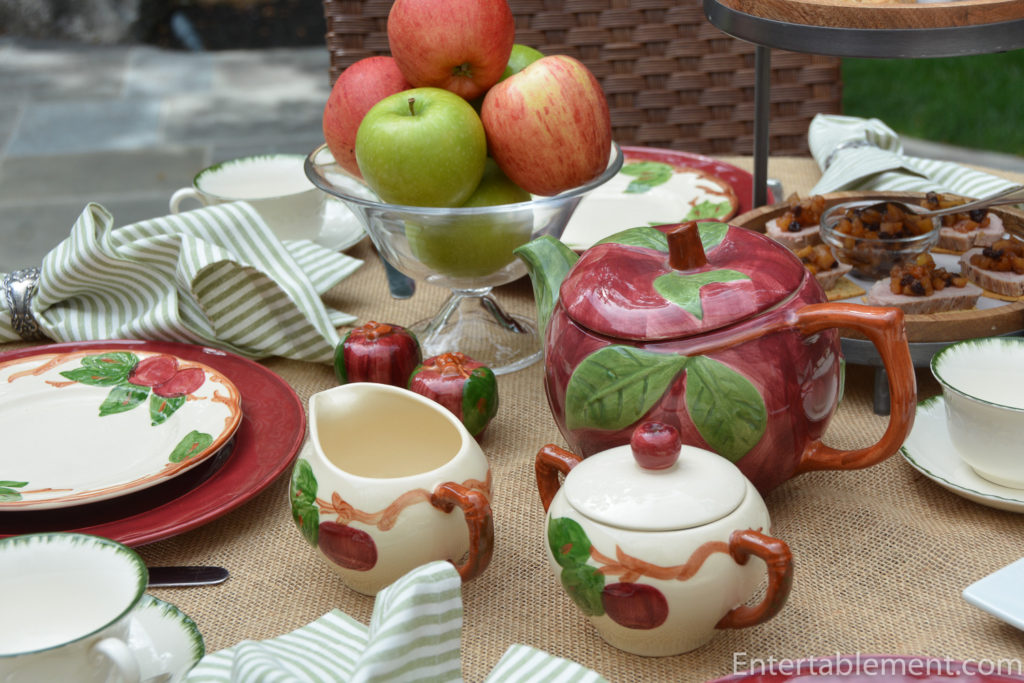 The simple two-tiered wooden and metal stand is from World Market. I liked its diminutive stature; it holds just enough for a small tea without taking up too much real estate. 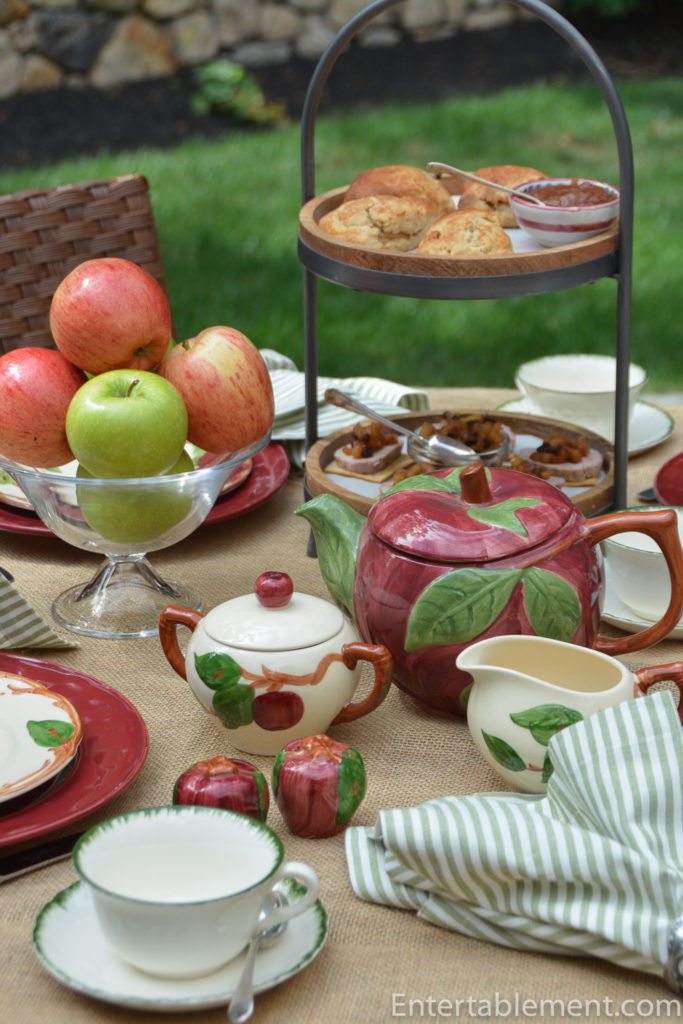 We are now settled in Cambridge for a couple of days, after dropping the kids and grandkids off at Heathrow Airport yesterday morning. They’ve made it safely back to Canada and we have another few days in England. The family had a marvellous couple of weeks together travelling around in what daughter Lauren most improperly dubbed our Mormon Van, an eight-passenger vehicle of bone-shaking suspension, rendering one of the little ones carsick on one unfortunate occasion.

We managed to see Ely Cathedral yesterday and will explore the delights of Cambridge proper today and tomorrow, perhaps making our way over to Grantchester, too. The traffic in and out of Cambridge is horrific, and we tried to use Bury St. Edmonds as our base a couple of years ago, hoping to access Cambridge from there for sightseeing; didn’t work… 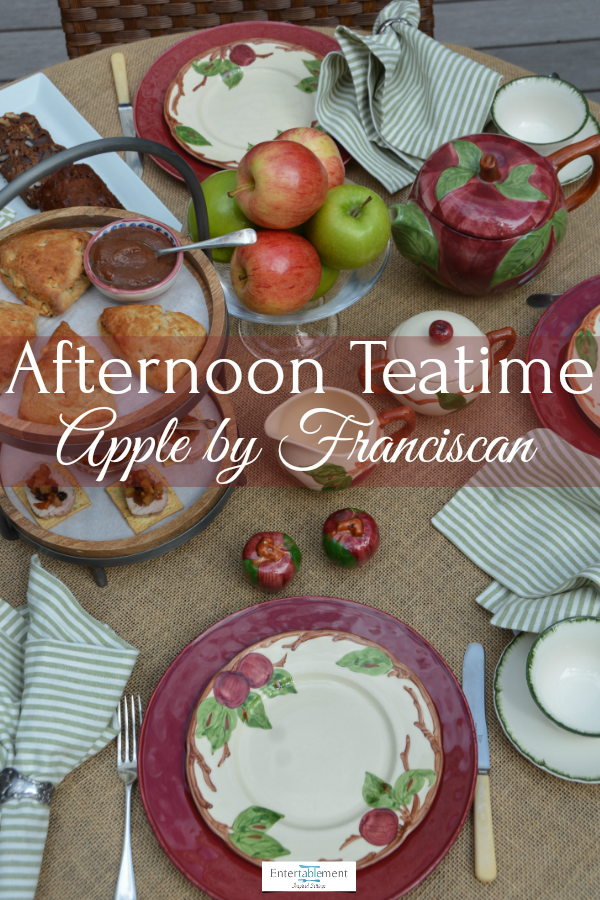