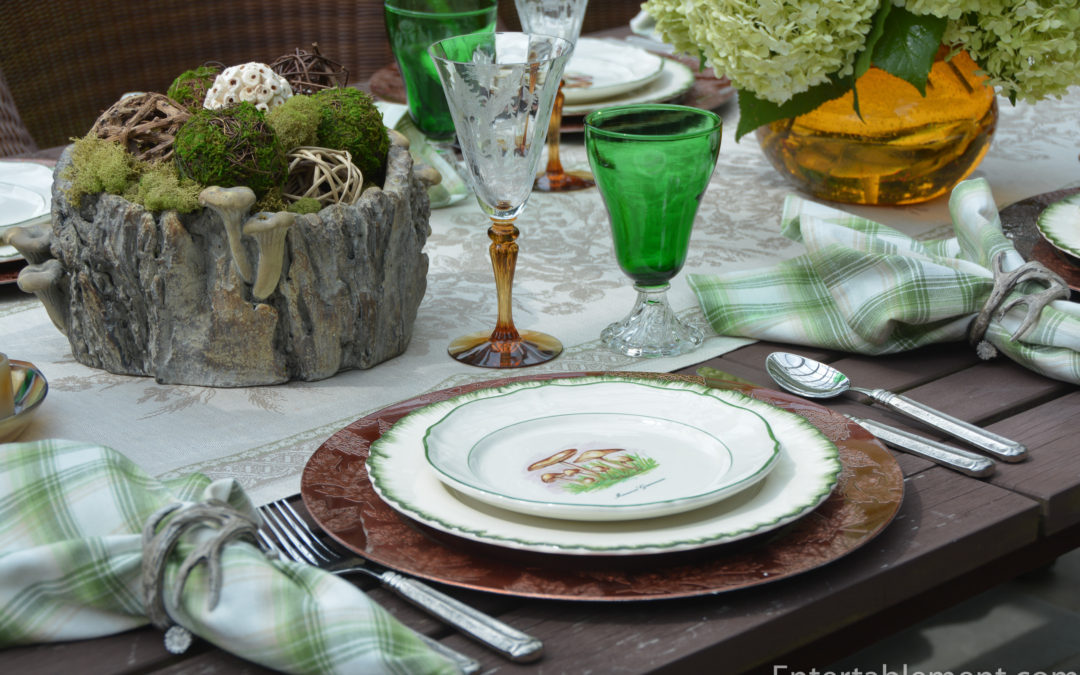 September heralds the start of mushroom foraging season, particularly in Europe, where discerning an edible fungus from its deadly counterpart is an art form. 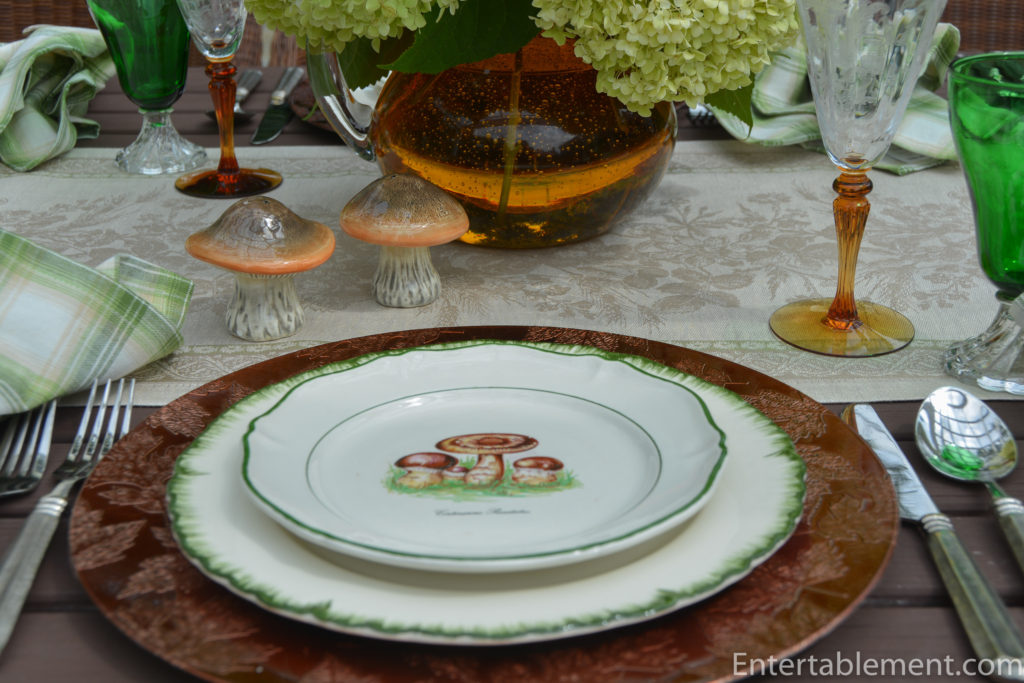 Many years ago, the hilarious  “A Year in Provence” series by Peter Mayle introduced me to the entire concept of seasonal food. Growing up with a typically British diet that featured a rotation of workaday meals, I was intrigued by a way of life that centred around appreciating and enjoying food at its seasonal peak. Mushrooms, though humble in appearance, make a significant contribution to the French repertoire of succulent offerings. 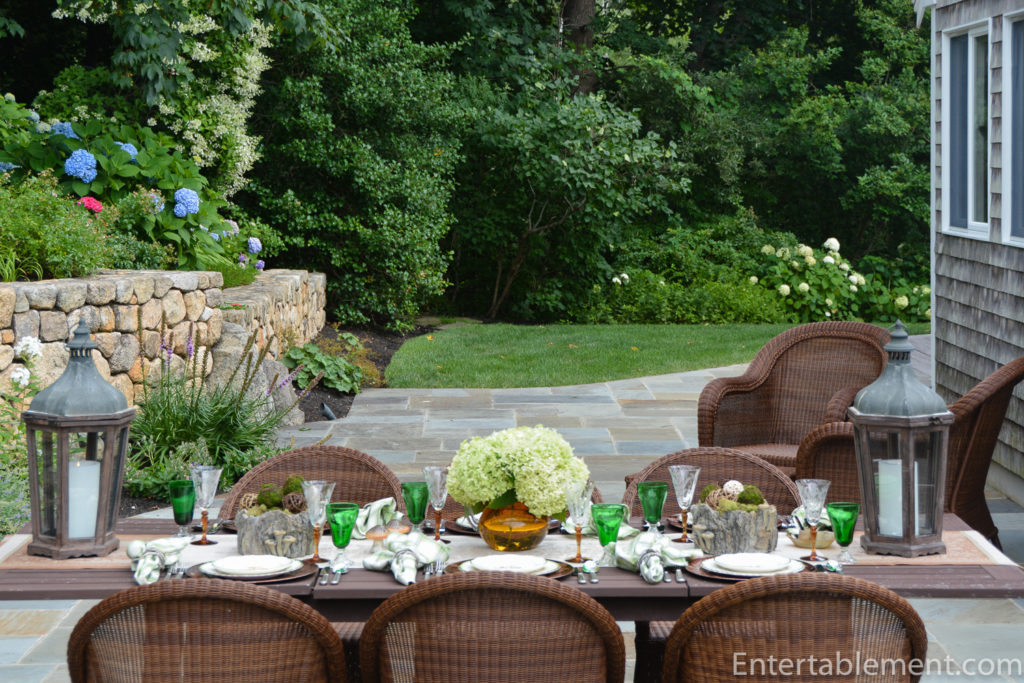 Thus, when Les Champignons de France by Saint Armand, a set of six plates in their own wonderful bark container, swam into my view on eBay one day, I was inspired to honour the fungi in a table setting. 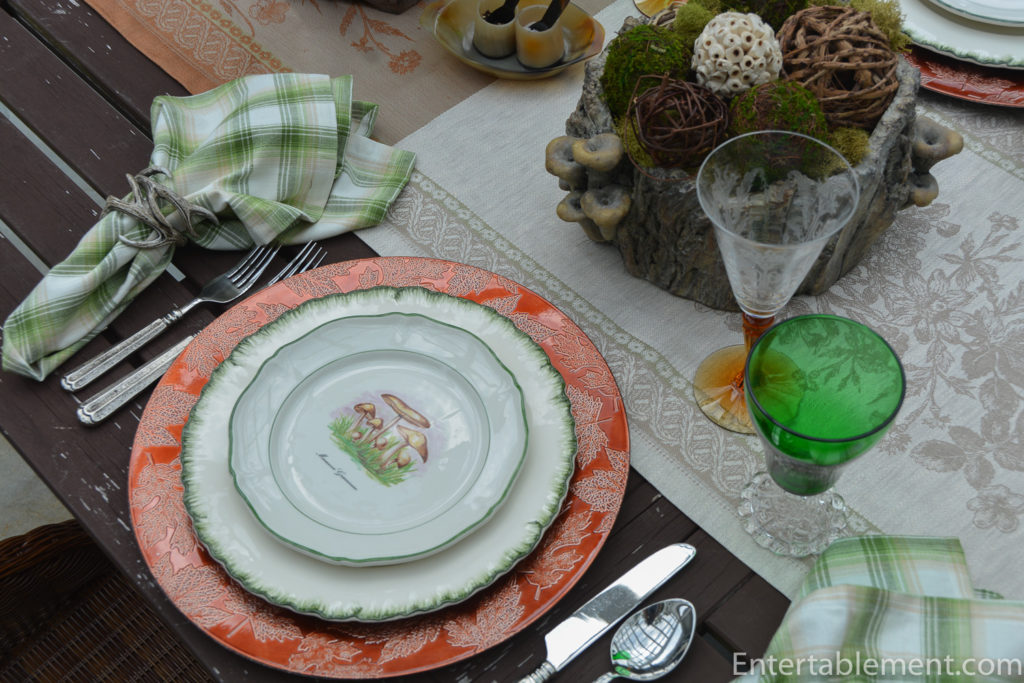 I did a bit of internet digging, and oh my heavens, there are hundreds of different kinds of mushrooms! Who knew? For those of us who confine our mushroom consumption to Cremini, Shitake and the occasional Morel from the produce section at the local grocers, this was a whole new world!  I recognized this one, though, with its formal name of Cantharellus Cibarius. It’s what we know as a Chanterelle, 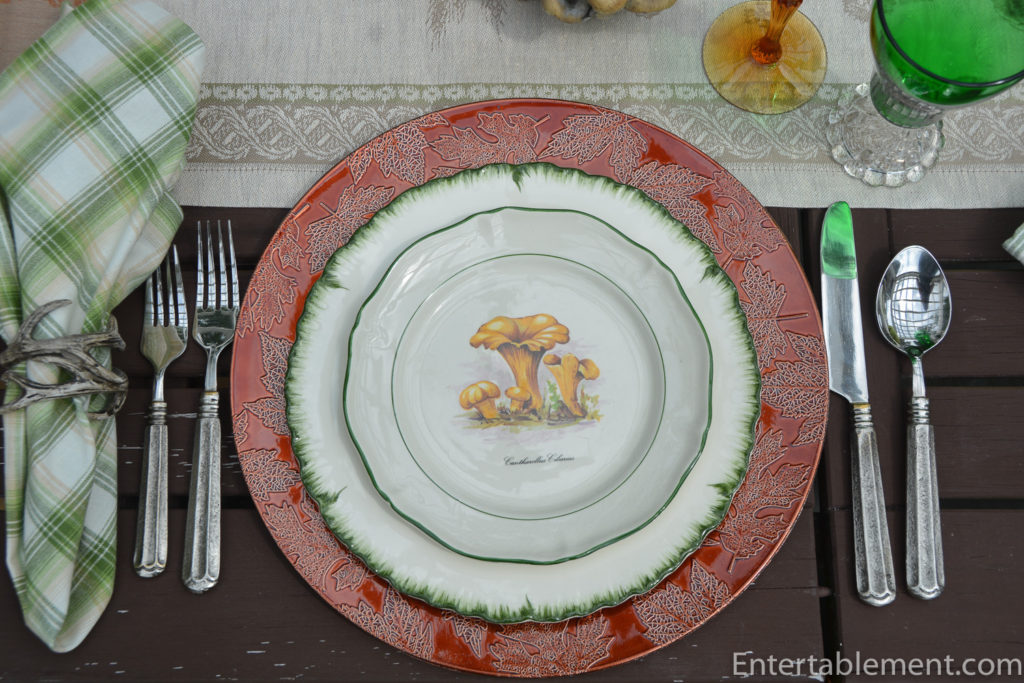 Bollus Collinitus (sounds like a nasty disease, doesn’t it?) is actually Suillus collinitus of the Bollus family. According to First Nature, it’s found most commonly in southern European countries, grouped beneath large pine trees, who provide shade in the otherwise dry sandy soil. 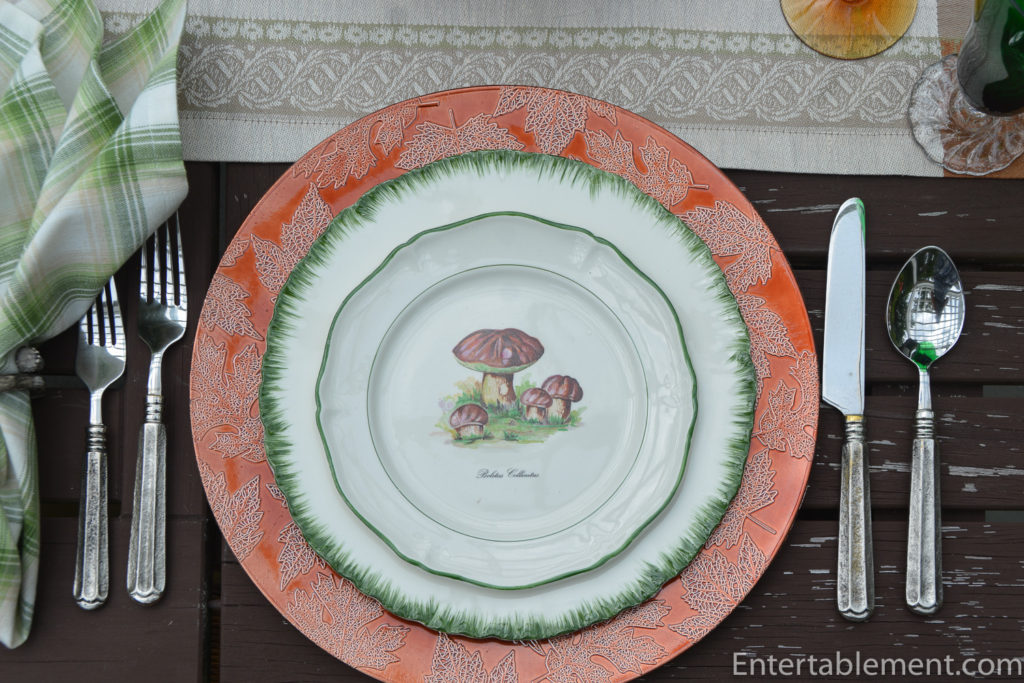 Without taking an advanced degree in Mushroom Identification, I will venture to suggest these are edible mushrooms, given that they are on plates, but who knows? 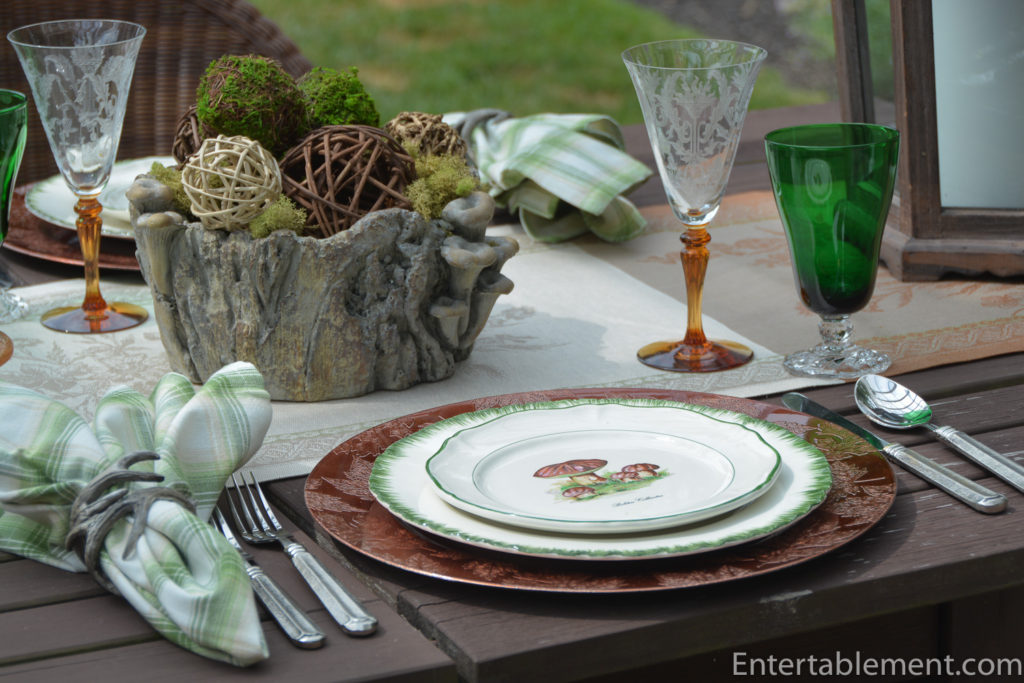 This one, Cortinarius Punclalus is from the genus Cortinarius, which The Mushroom Expert tells us is the largest genus of mushrooms in the world, containing literally thousands of species. My Latin is very, very sketchy, but I’m tempted to say Punclalus sounds like it might be on time.  It is not one of the 22 species listed the Mushroom Expert’s page, which does include species trivialis, anomalus and mucosus leading me to conjecture they’re insignificant, incognito contributors to New York Times articles, and have a cold. 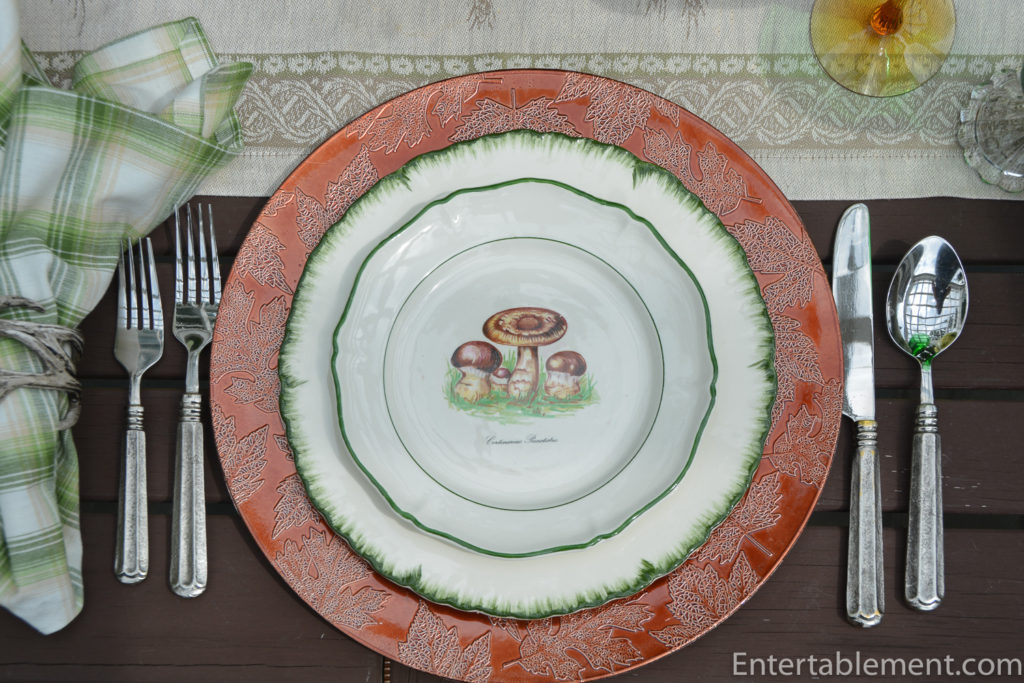 These cement planters from Pier 1 made a rustic contribution. I filled them with moss-covered and plain grapevine leaf balls, with bits of reindeer moss tucked in. 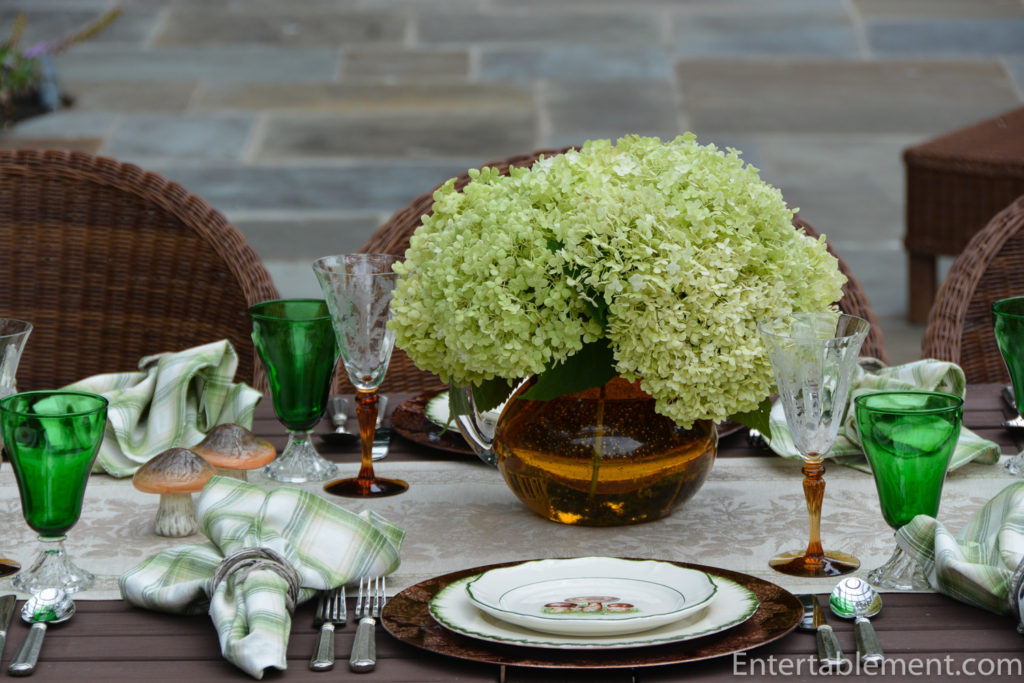 The antler-shaped napkin rings are from Ballard Design. They’re made of resin, so not quite a sturdy as I would like. I had to repair a couple that arrived damaged. 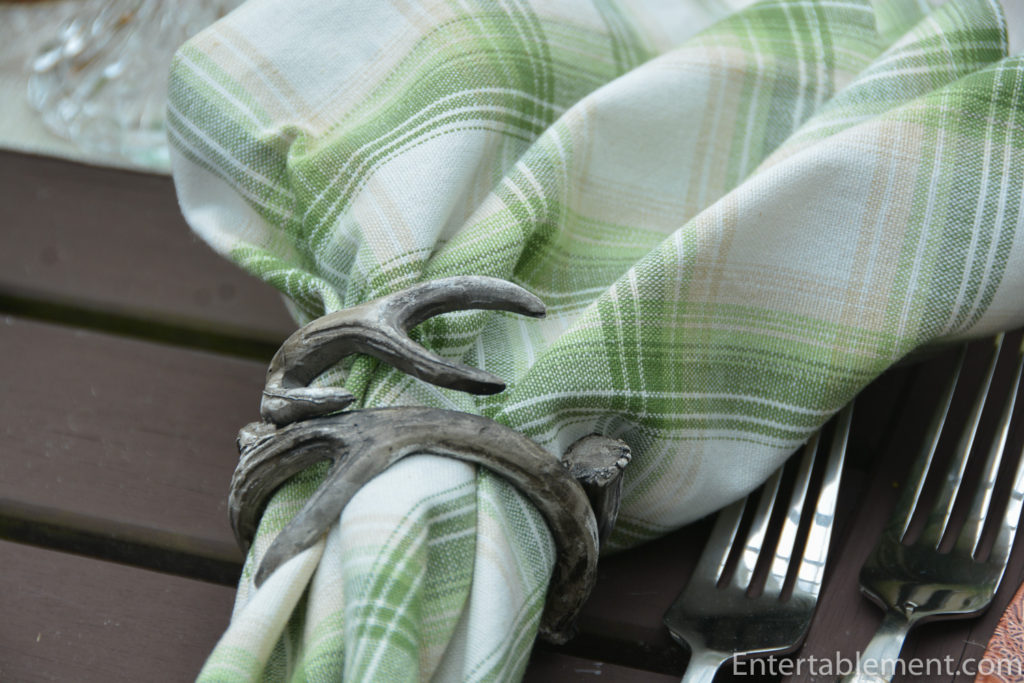 They were on a great sale (probably due to their delicacy) and I ordered them at the same time as the Pagoda Lanterns. I thought they’d get a lot of use for fall tablescapes or Robert Burns type dinners.  The napkins are from Pier 1 earlier this year. 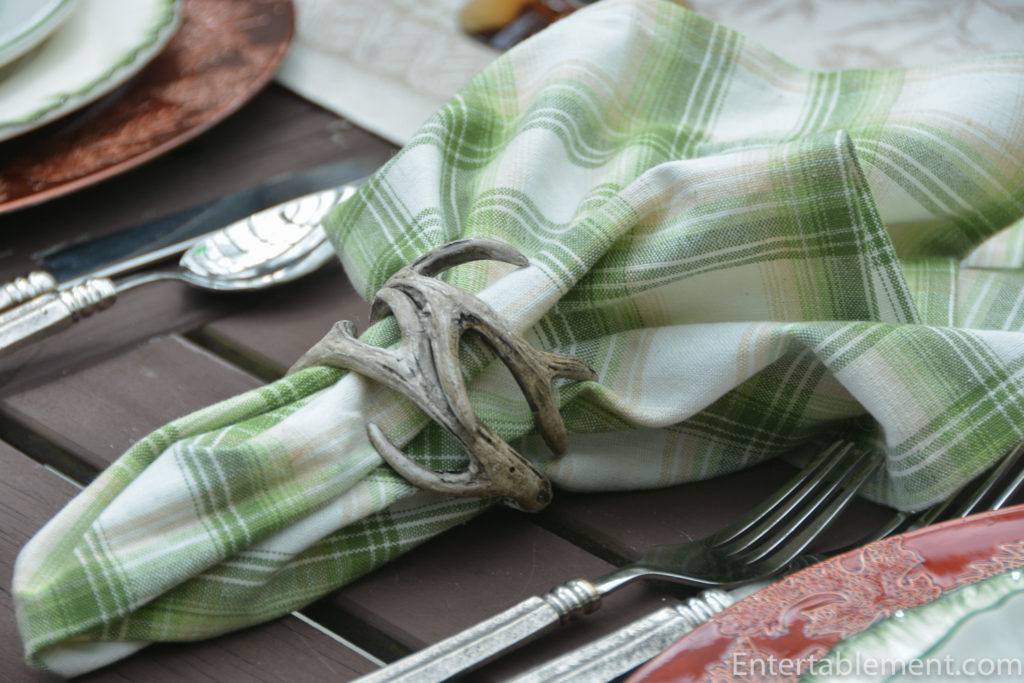 The curvy green edging of the mushroom plates seemed to coordinate well with the shell-edged Williamsburg plates. (Rats,  I see some water from the hydrangea has dripped on the runner…) 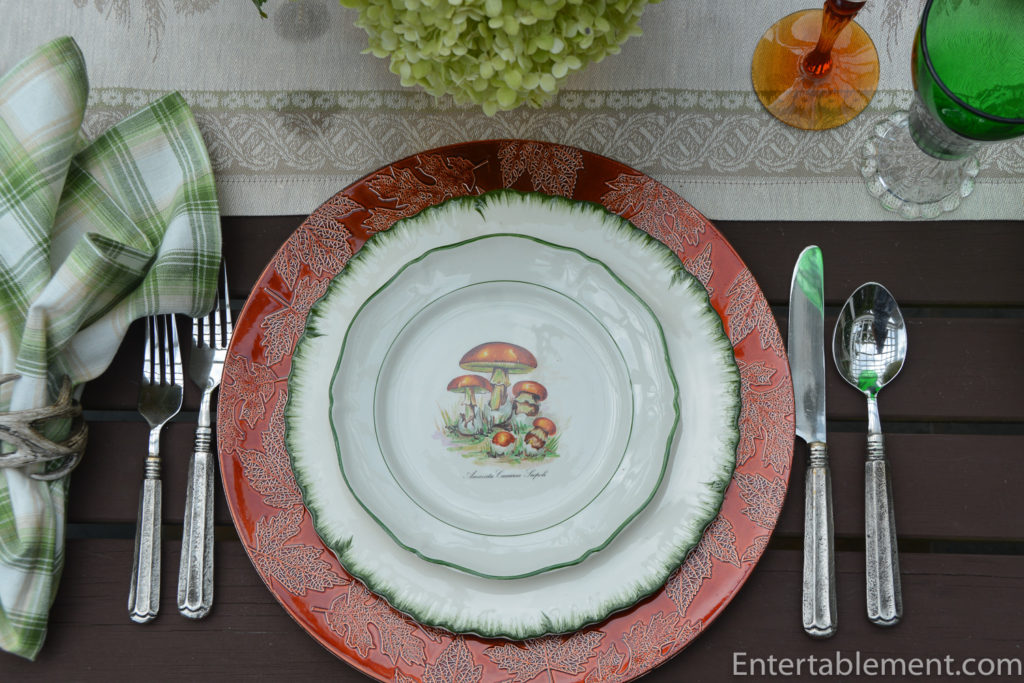 I went with two different styles of Depression glass: Amber stemmed Julia byTiffin-Franciscan and Colonial Dame Green by Fostoria both available at Replacements or on eBay from time to time. 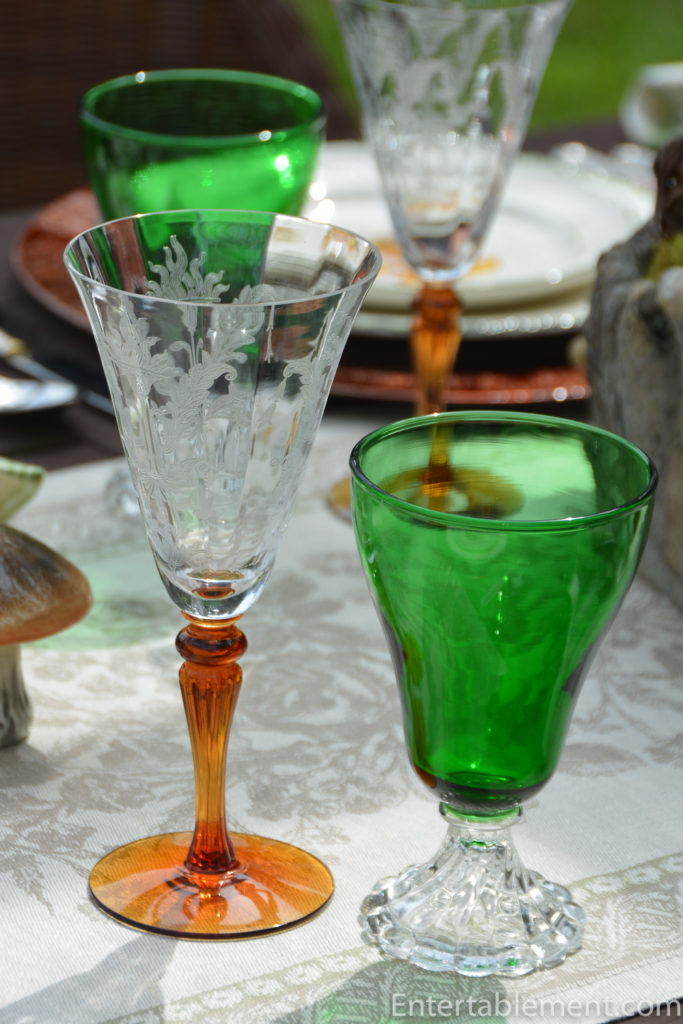 The chargers are from Pier 1 last year and the Danieli Flatware is from World Market. 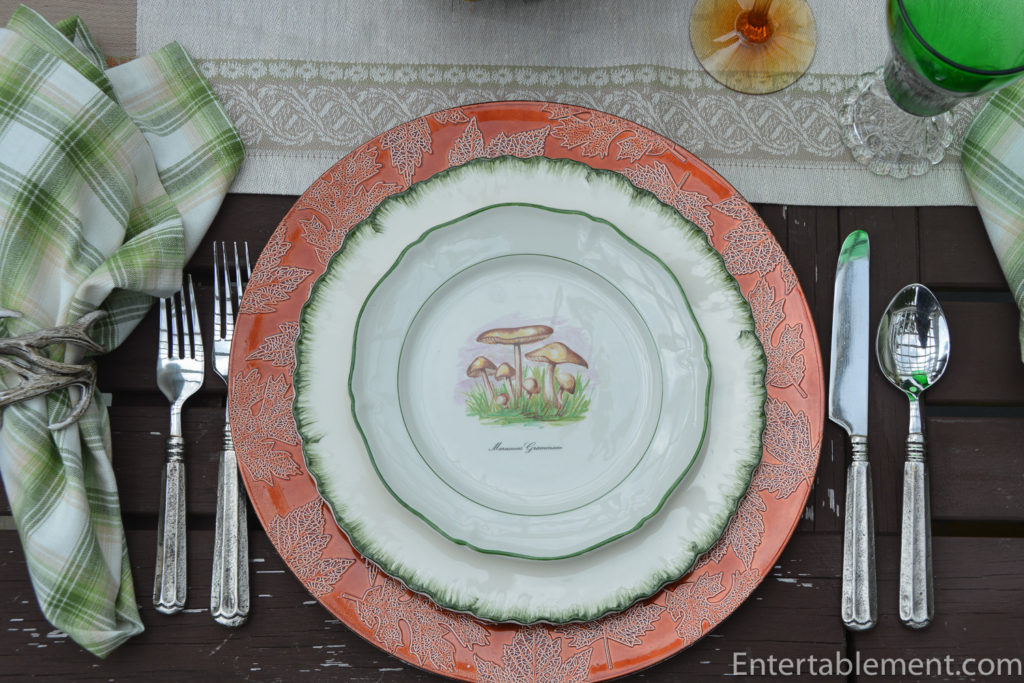 I’ve had these little mushroom salt & peppers for years. They came from Pottery Barn. 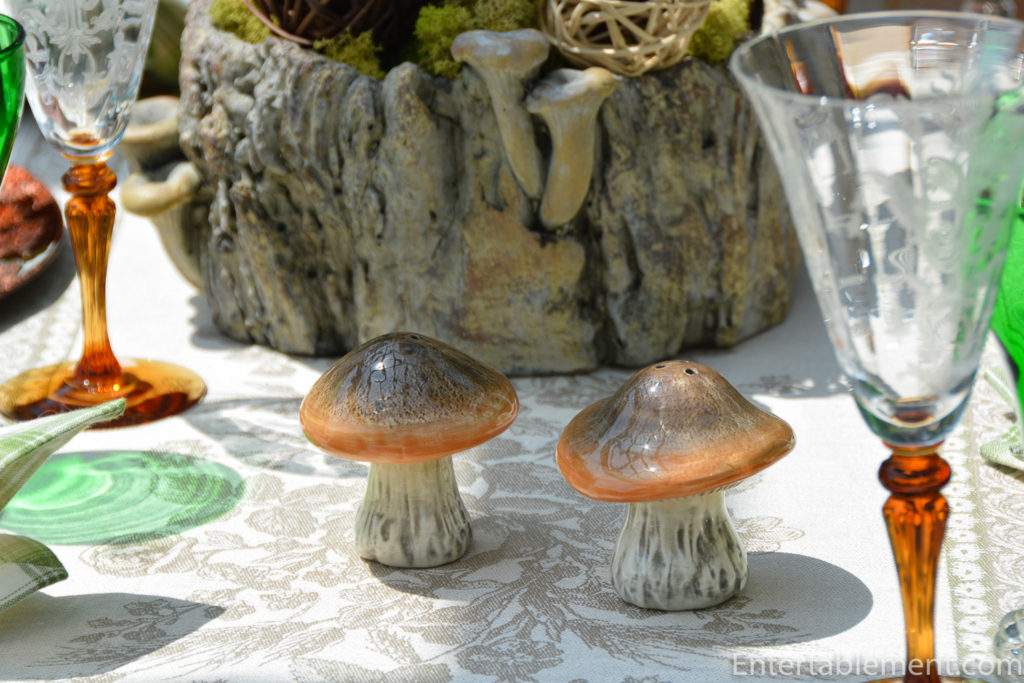 And the last of the six plates, Psalliota Pratensis, which sounds like a pretentious skin condition. No wonder Latin is a dead language. 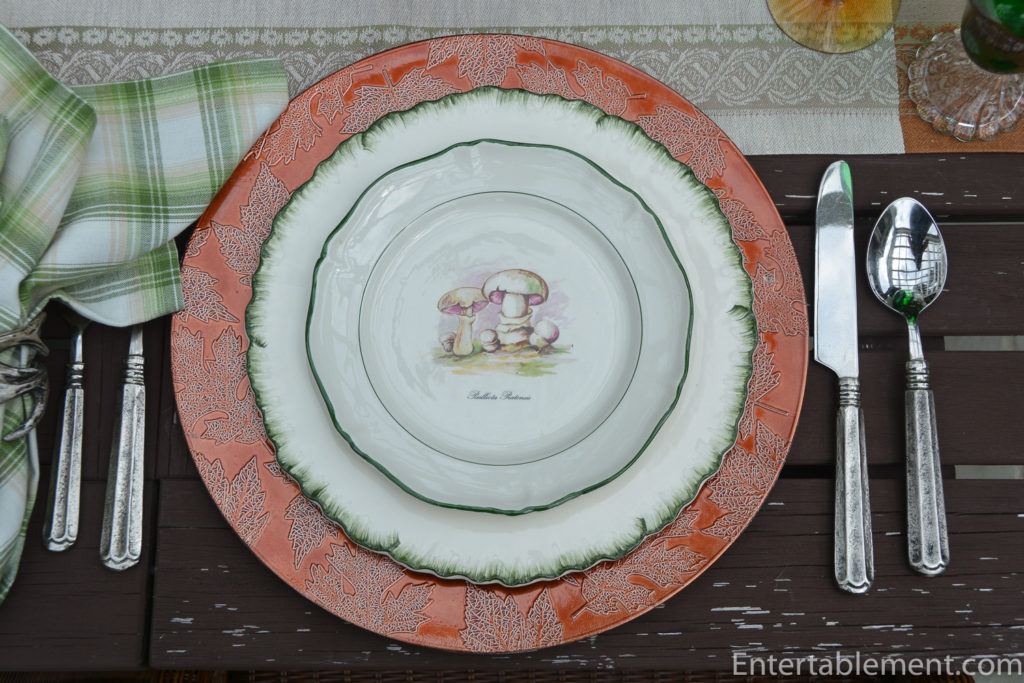 All that mushroom talk was making me hungry, so I made a Mushroom Strudel to take to a friend’s house to use as an appetizer. 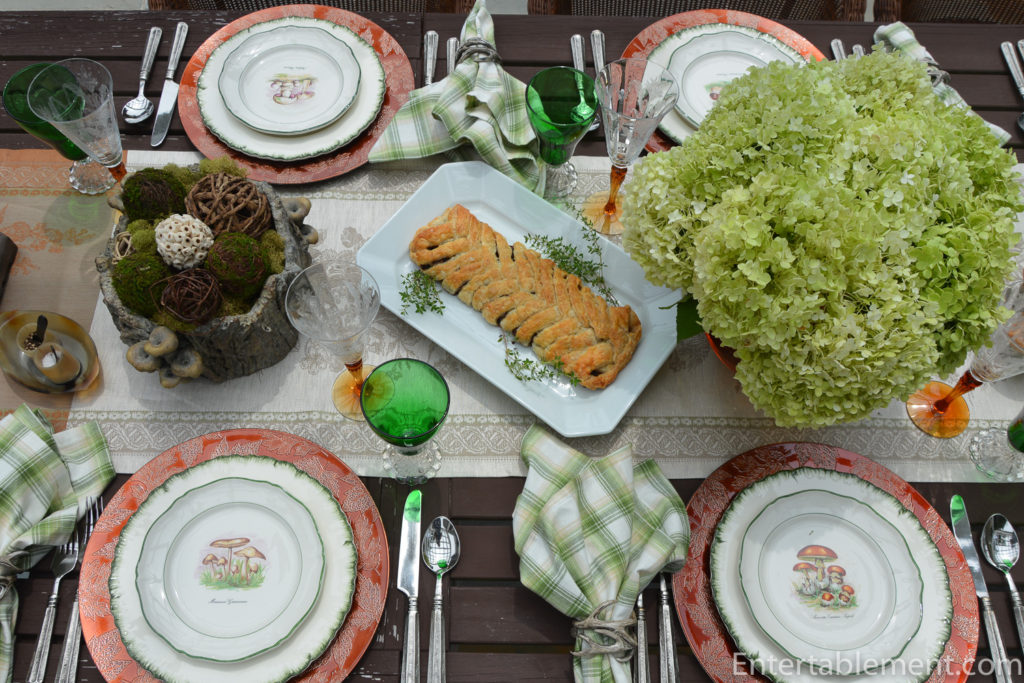 We have so much to celebrate by way of food in the fall!  Mushrooms, apples and plums for a start. Yum! 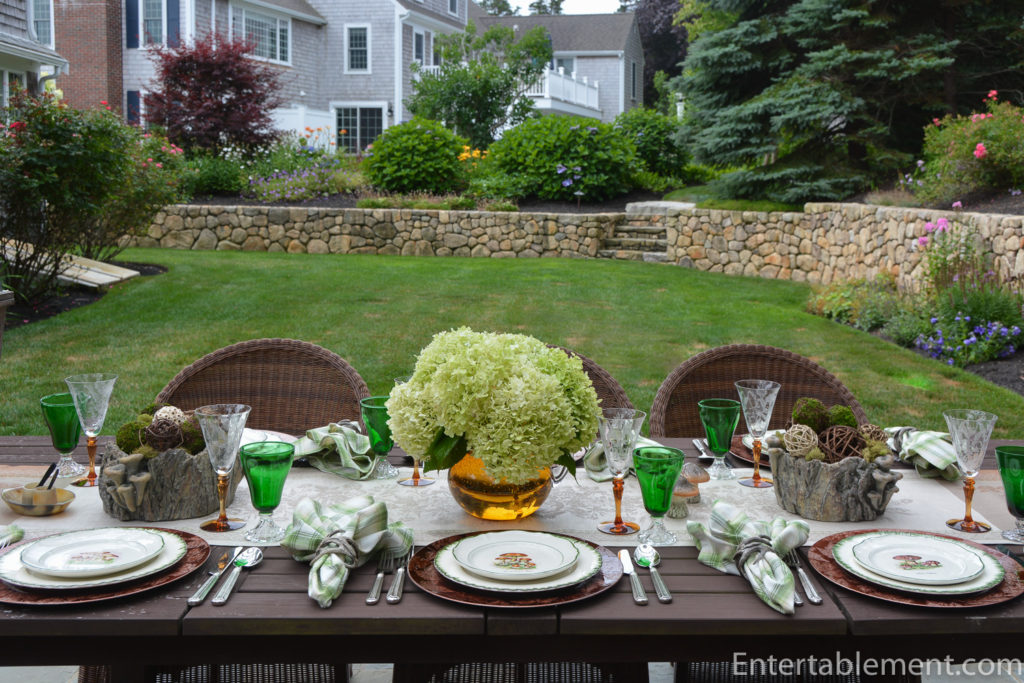 This coming weekend, the daughter of a close friend is getting married and the mother of the bride asked me to make the flower arrangements. This seemed very doable and a fine idea a year ago when she suggested it. In the cold, practical light of day, however, comes the hollow realization that I’ve never done anything on that scale before. I hope her confidence is not misplaced! I’ve have had more than a few moments of panic in the intervening period of time, let me tell you. How I wish 3 am had never been invented.

Then there is the matter of the cupcakes. My daughter Lauren, the chef, is coming out to help me decorate the four dozen of each vanilla and chocolate cupcakes for the same event. I baked them yesterday and they’re currently in the freezer awaiting decoration Saturday morning. We’re going to use a lemon curd filling for half the vanilla and a raspberry filling for half the chocolate.  Wish us luck! I’ll provide pictures and an update next week. It will be an adventure! 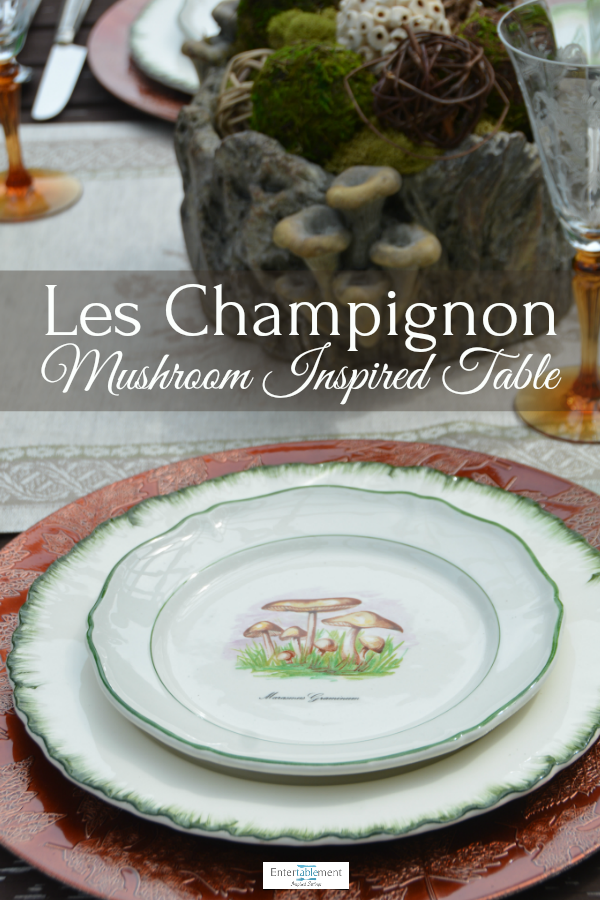