Penguin Fun with Chillin’ by Sakura 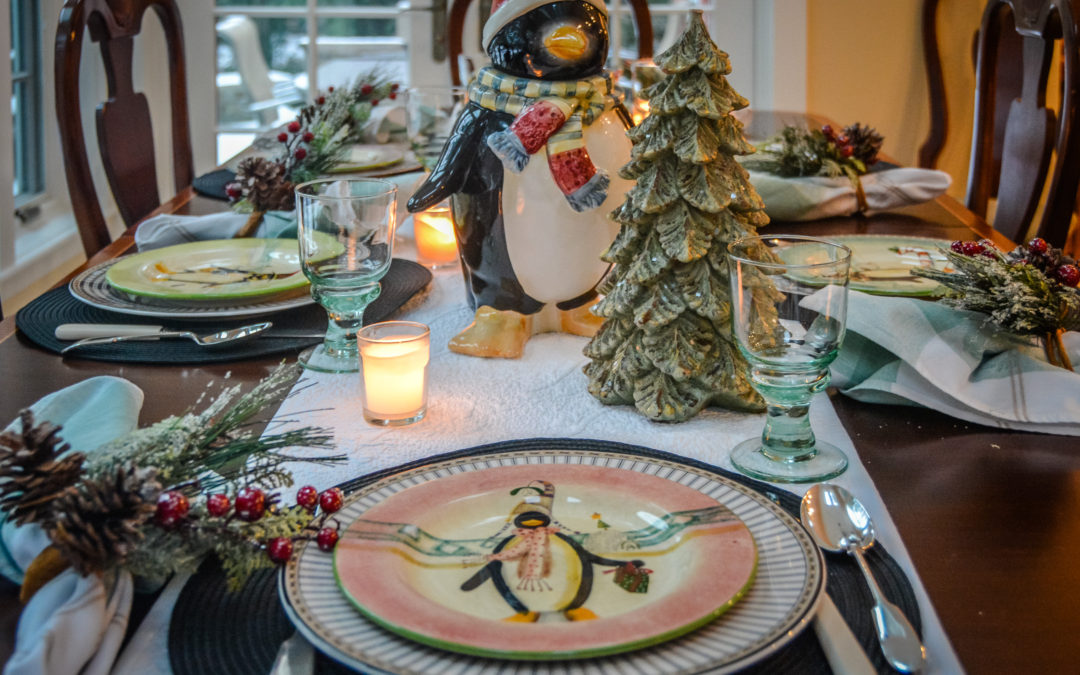 Penguins in jester hats and colourful scarves. Who thinks these things up? 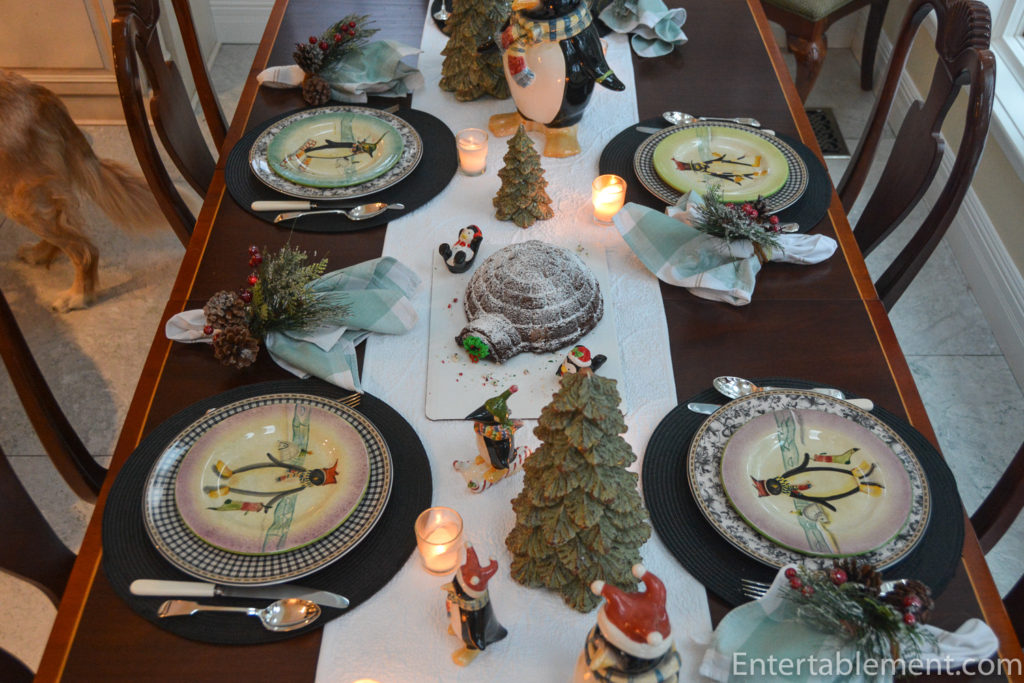 Whoever they are, I’m grateful. You can’t stop grinning when looking at these ridiculous creatures.

I don’t know much about the origins of Chillin’ by Sakura but spotted the plates a few years ago when cruising for Christmas tableware ideas on Replacements.  I posted a search on eBay and in the fullness of time, some appeared. A couple of years later, the cookie jar turned up, and it’s been occupying the place of honour on our kitchen windowsill this season. The grandkids love it. 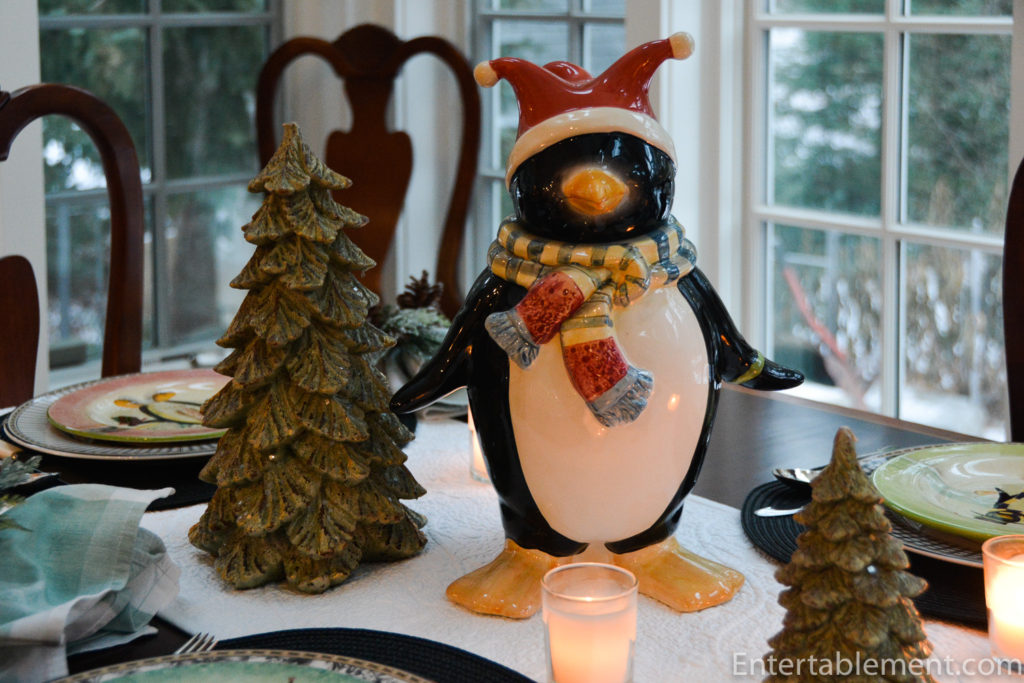 The four differently coloured salad plates all feature a central penguin figure. One plate is a warm, rosy pink with the penguin in a polka dotted scarf, carrying a polka dotted gift bag. 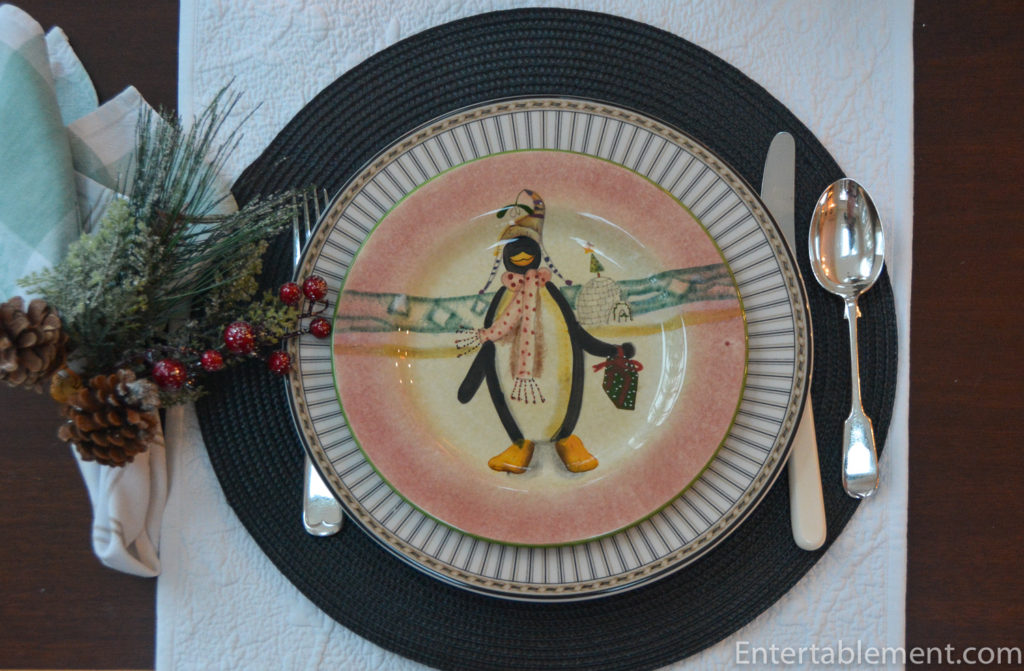 Another is a soft lime green with a red bird on the penguin’s hat. 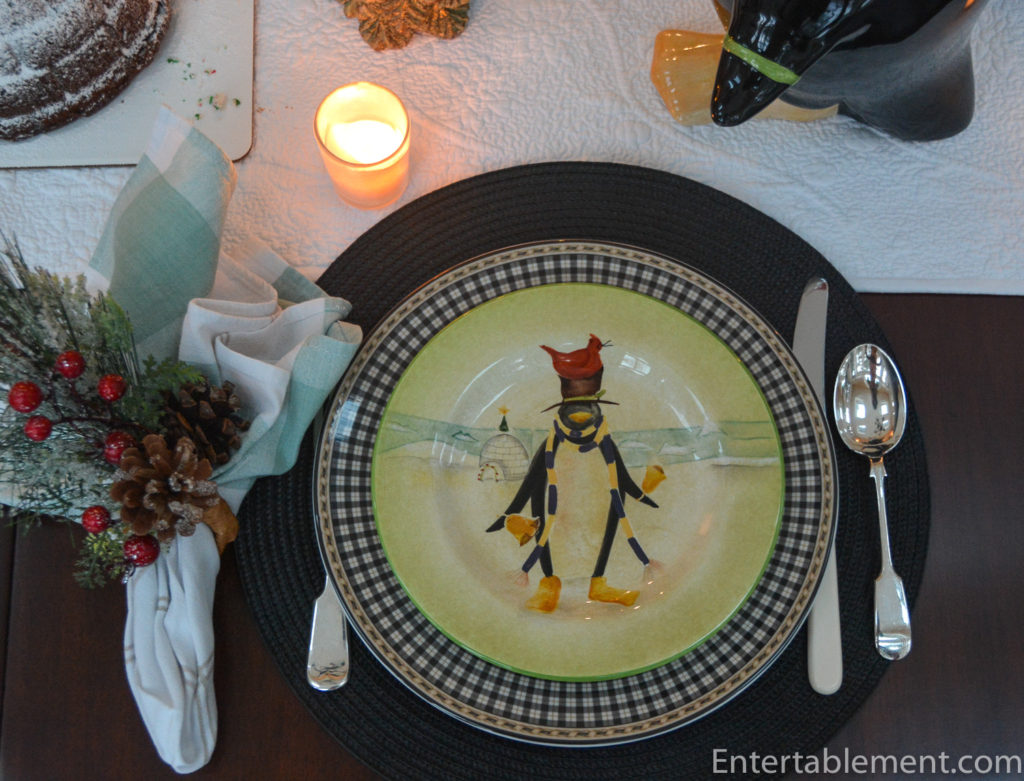 Then we have a pale amethyst with a penguin in a red hat, carrying a stocking. 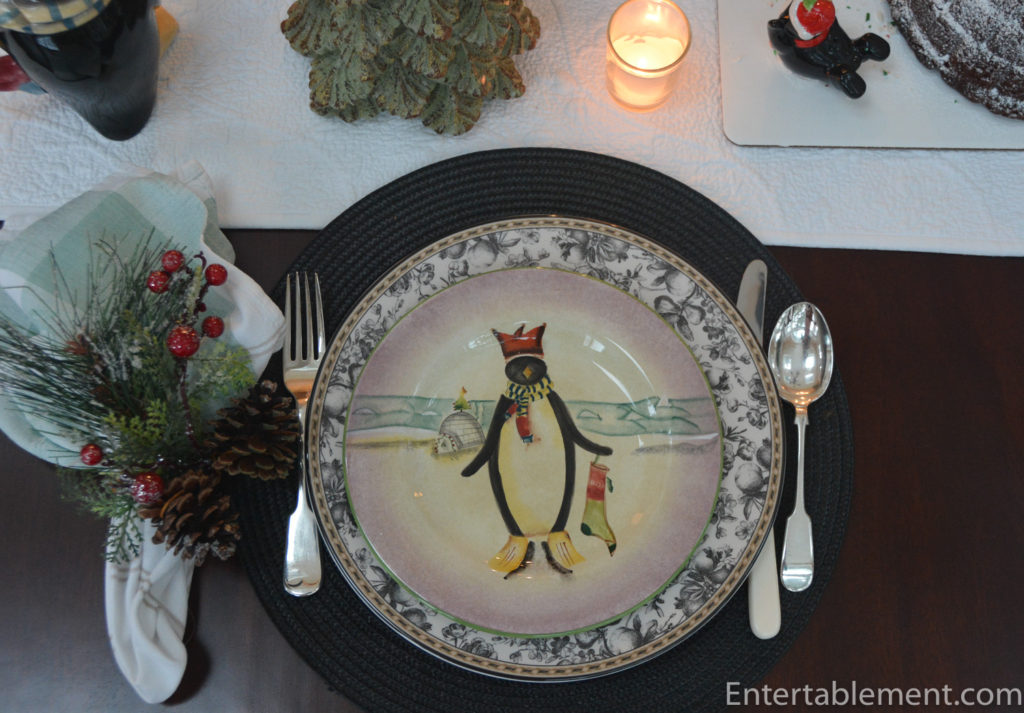 And lastly, an aqua plate with a skiing penguin. 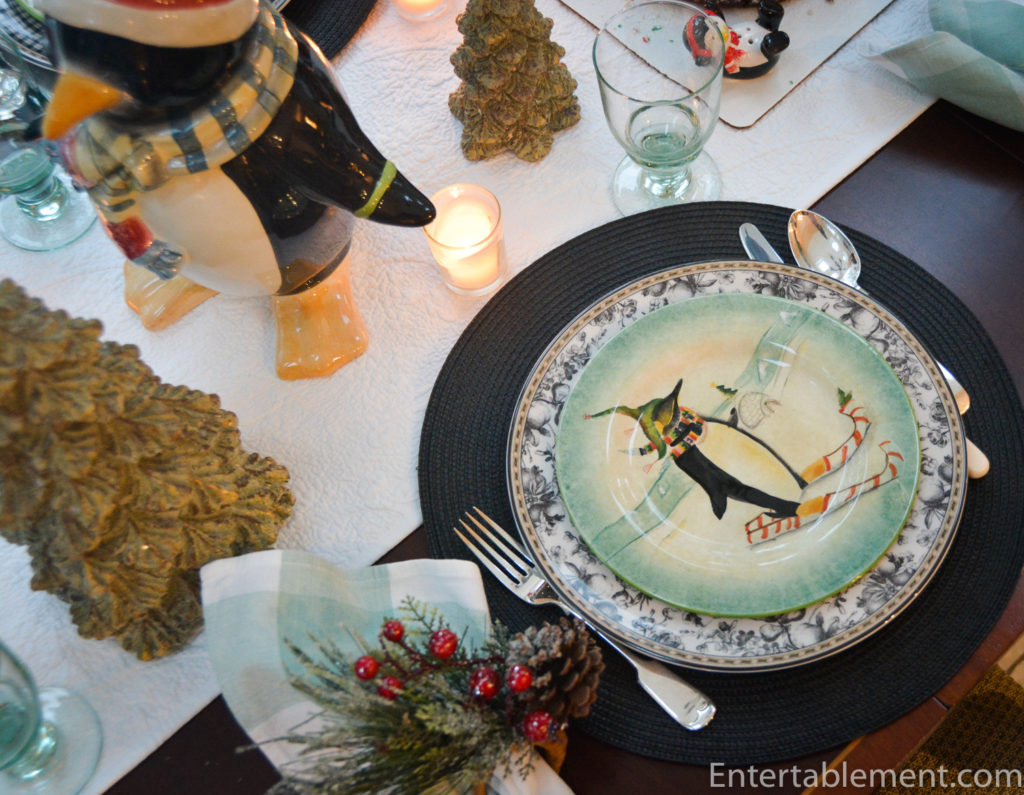 You’ll notice that the unifying feature in the background of the plates is an igloo. Voila. Igloo pound cake. NordicWare and Williams Sonoma got together about 10 years ago and produced the mould, and I was lucky to find one on eBay. The pound cake was delicious; I’d forgotten how much I love a good, plain butter pound cake. The only issue was the density of the batter relative to the depth of the pan. I think the edges of the cake dried out a bit while we waited for the centre to cook through. Next time I’d use a lighter batter (maybe a sponge cake?)  No complaints from the inmates, though. It disappeared quickly. 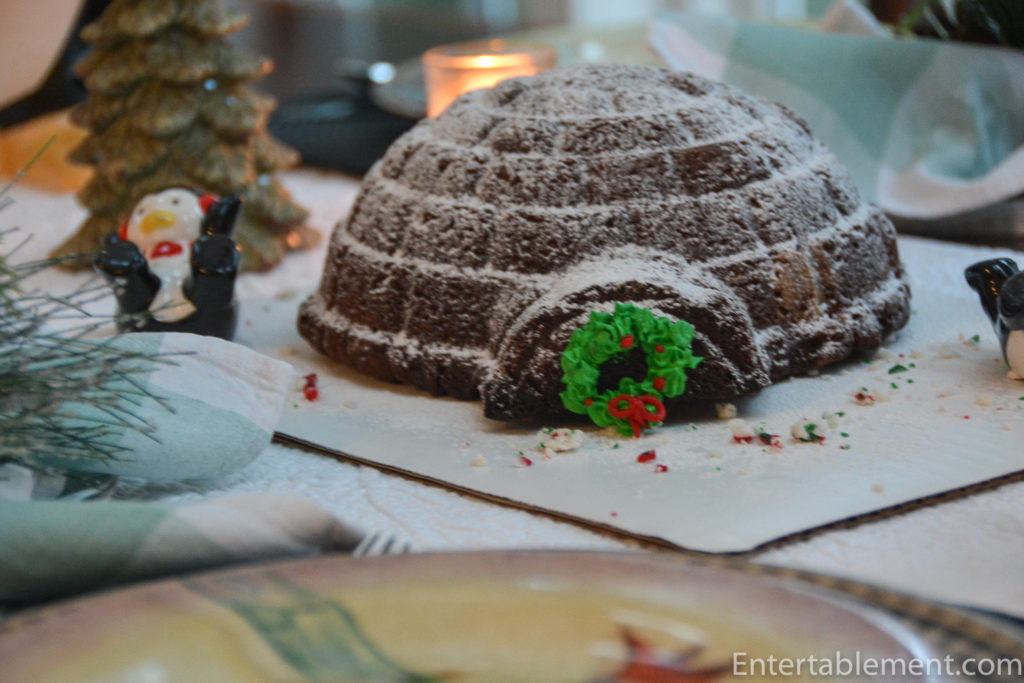 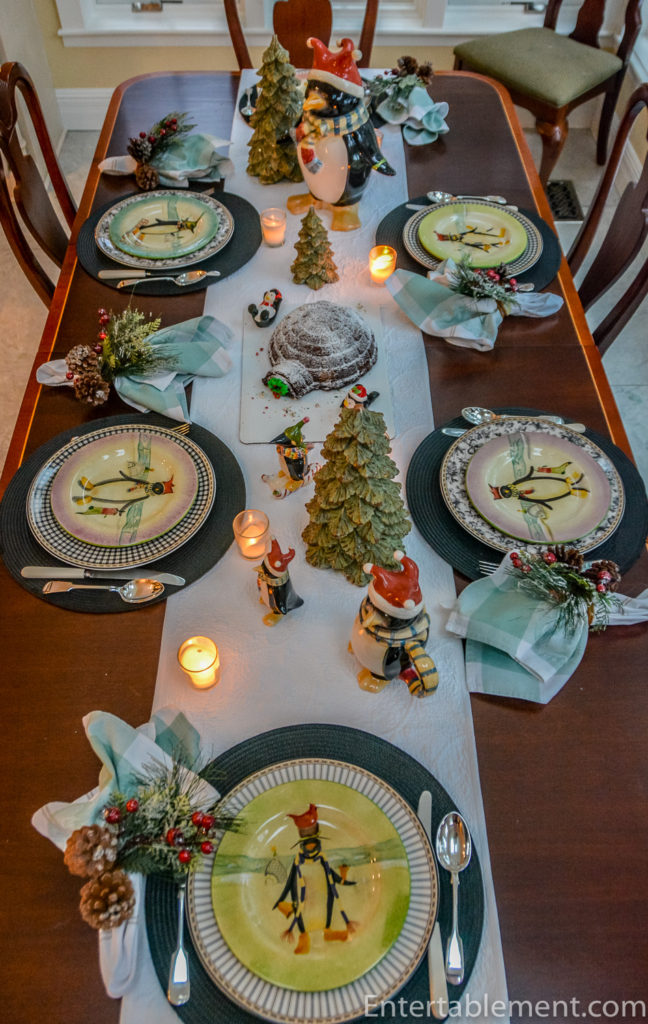 I was looking around for penguin salt and pepper shakers for another table when these guys swam into my orbit. That’s what clued me in that there were more pieces to the Chillin set. They’re big and sassy, and hugely fun. 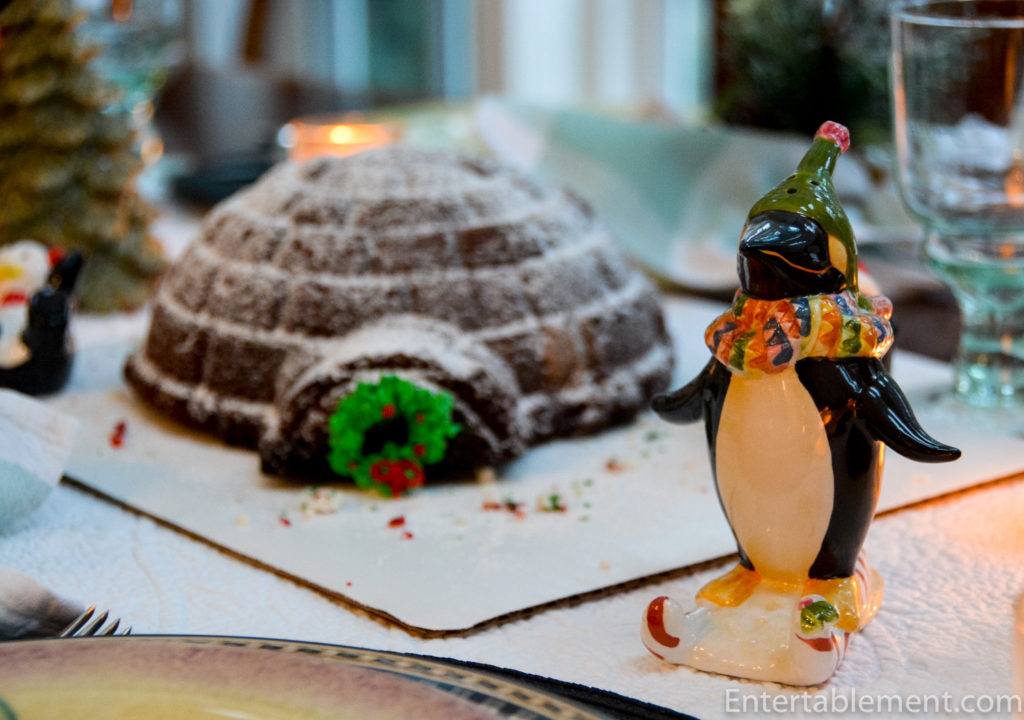 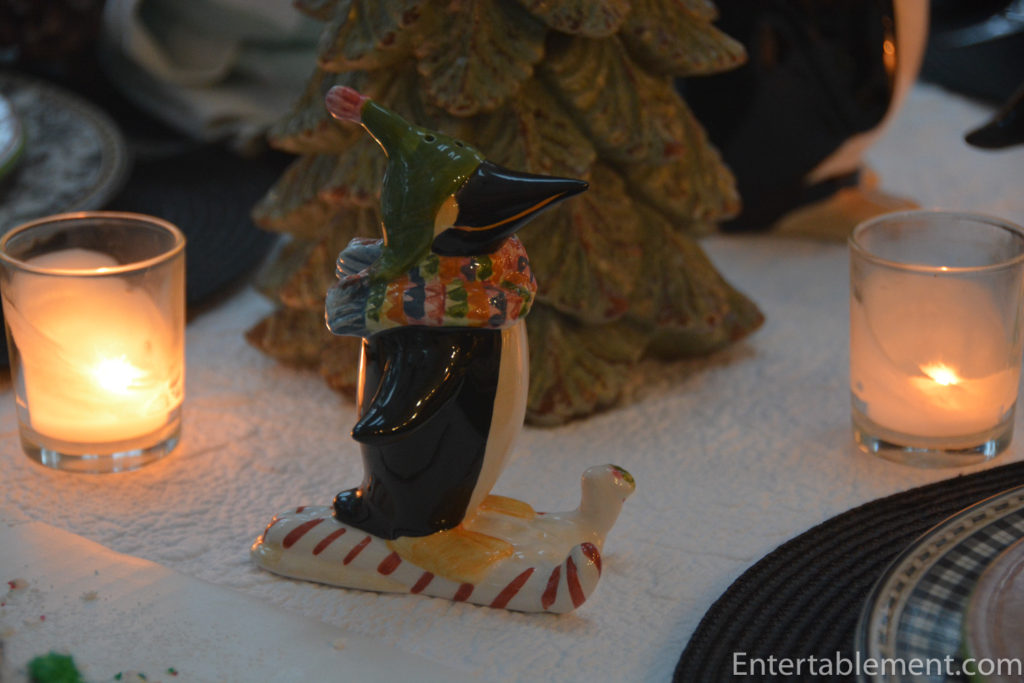 I also found one lidded mug. 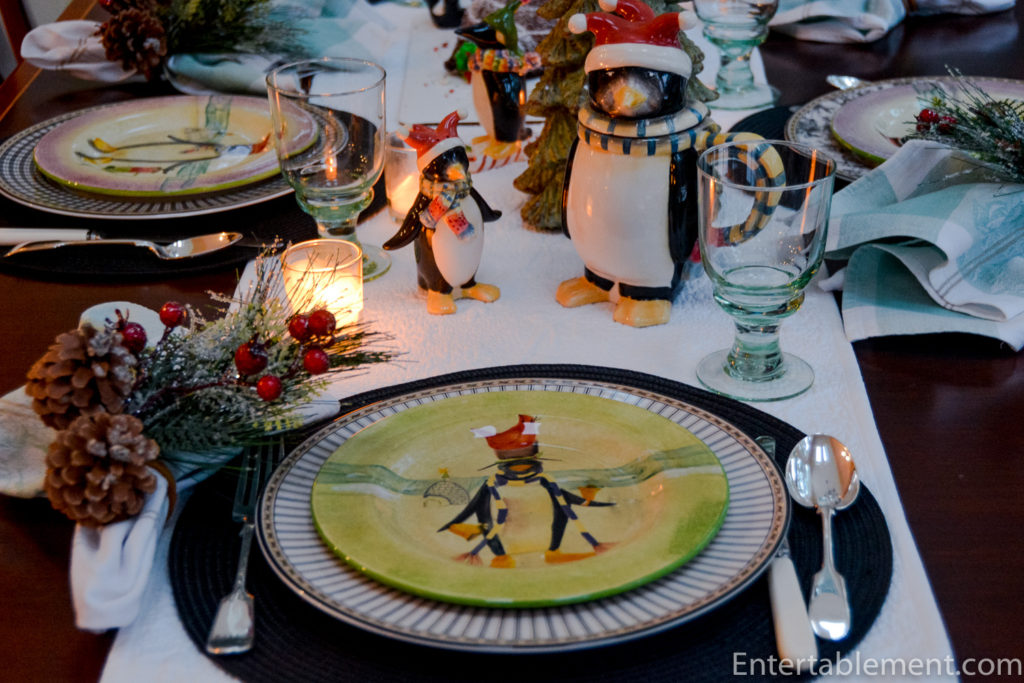 Once I’d assembled the centrepieces, including cake, salt & pepper shakers, cookie jar and mug, I considered what else to add. 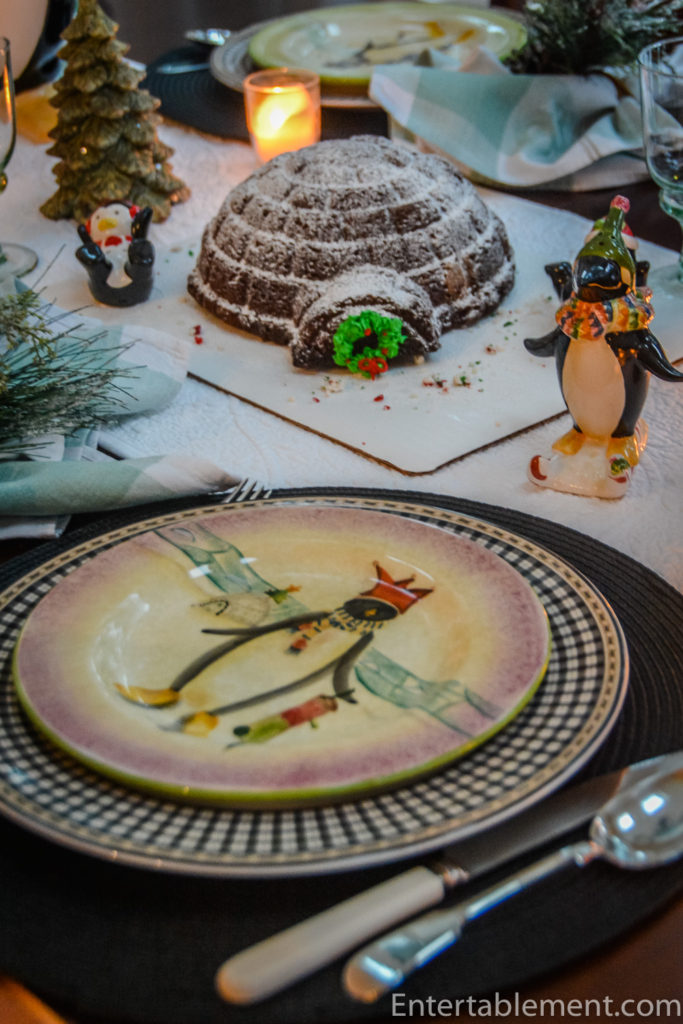 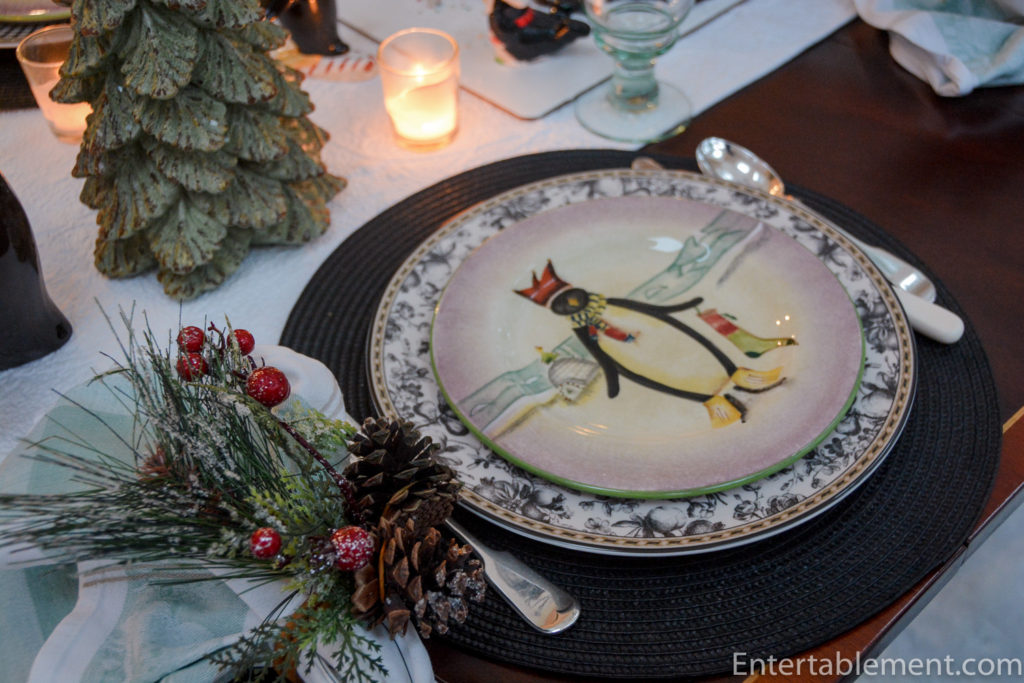 I’ve had the complete service for over a decade, and often use it in January as a palate cleanser after all the glitz of the holiday season. 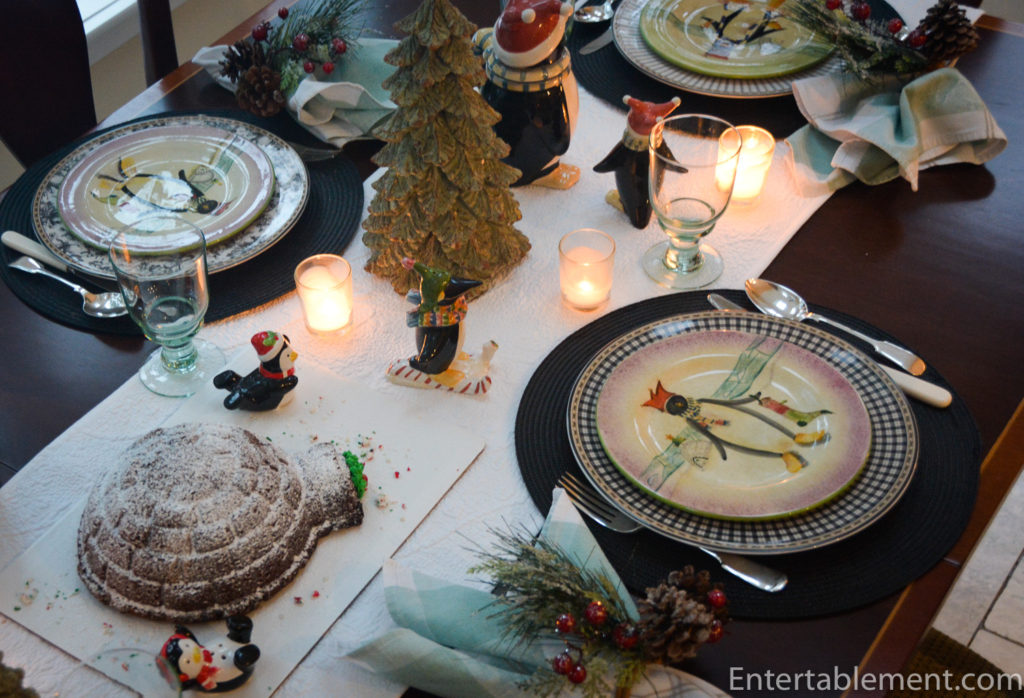 Festive napkin rings from Pier 1 last year toned with the frosted pastel of the plates and picked up the touch of red in the penguin’s attire. 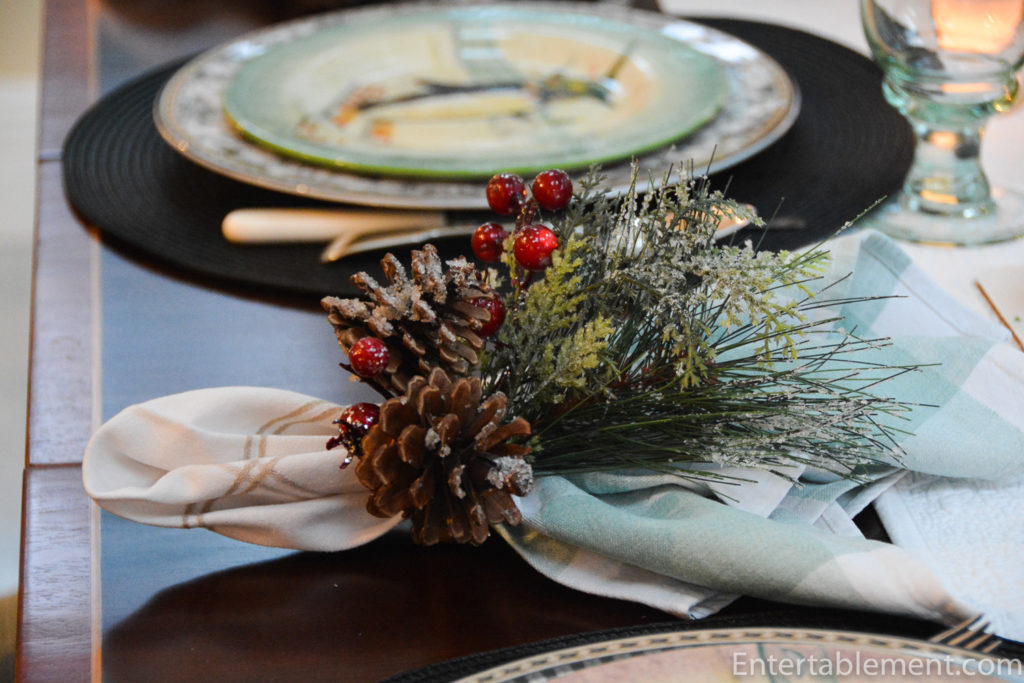 I don’t know what noise penguins make, but whatever it is, I imagine it would be a happy sound from the lot cavorting around this table. 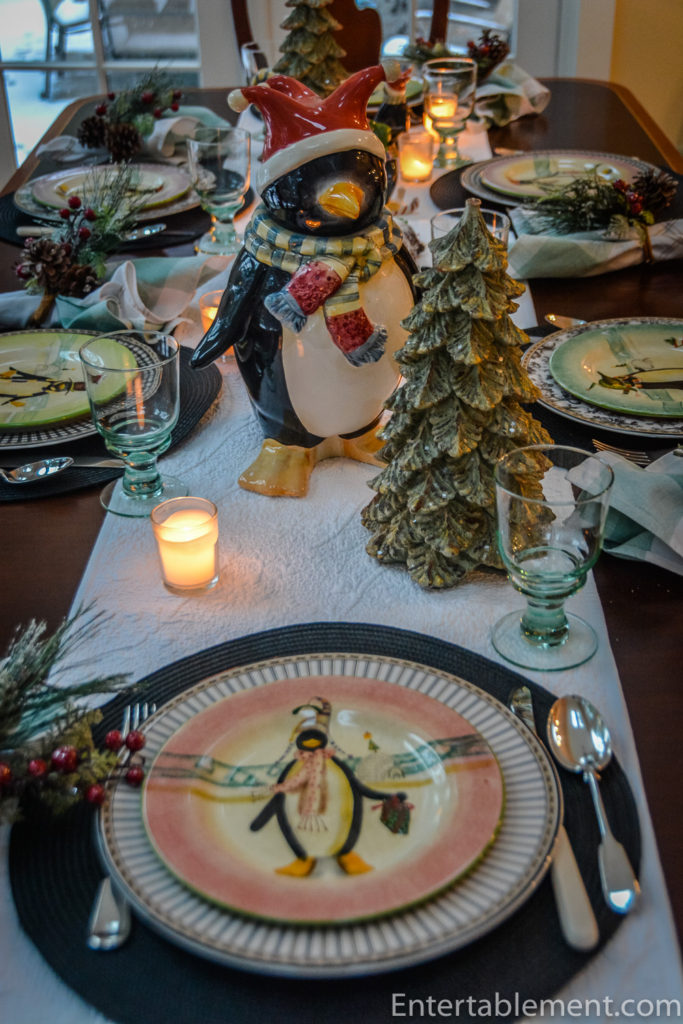 Don’t you love the holiday season with all the goofy accoutrements? 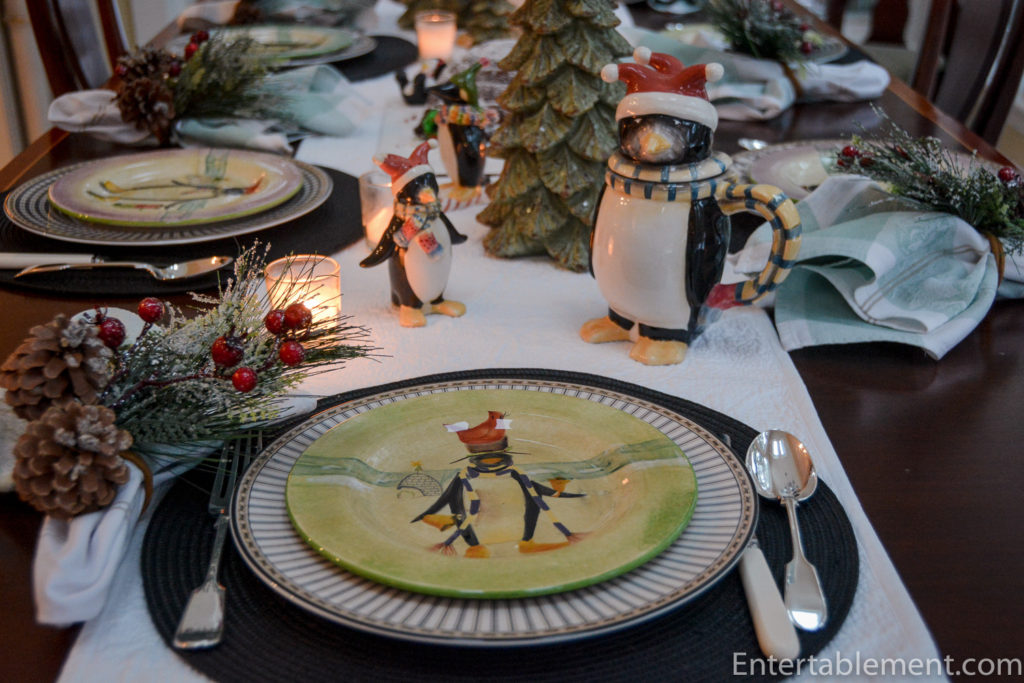 My favourite part is the lead-up with casual family meals, tree decorating and cookie baking. 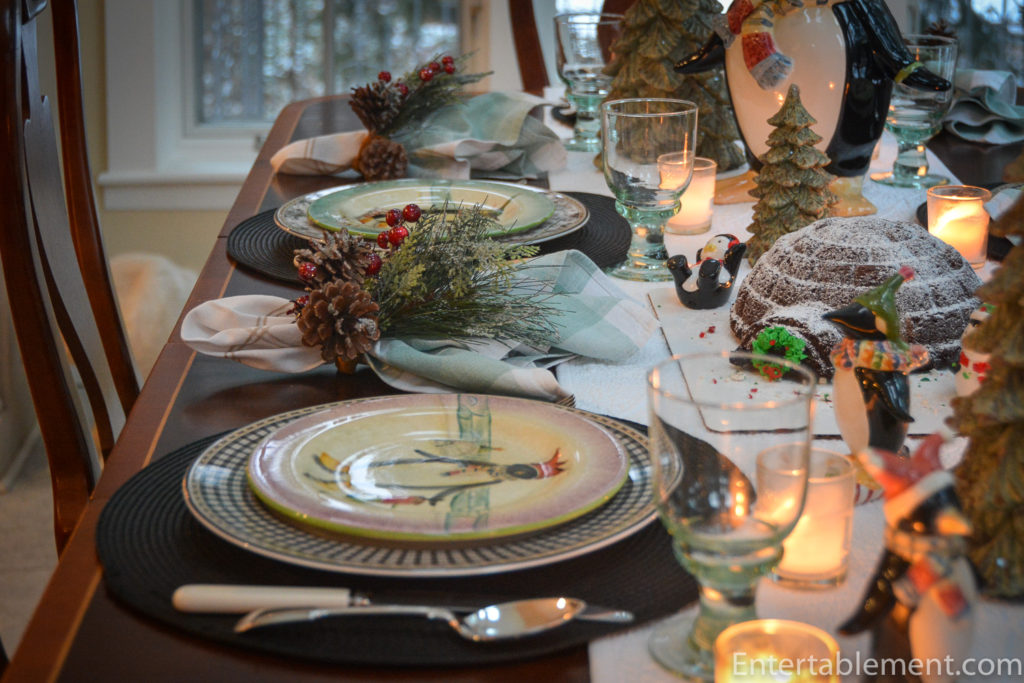 Of course, we had some help getting ready. Whatcha doin’ there, Dad? Why do we have a tree in the house? (you will note pets-in-motion continue to be a camera challenge). 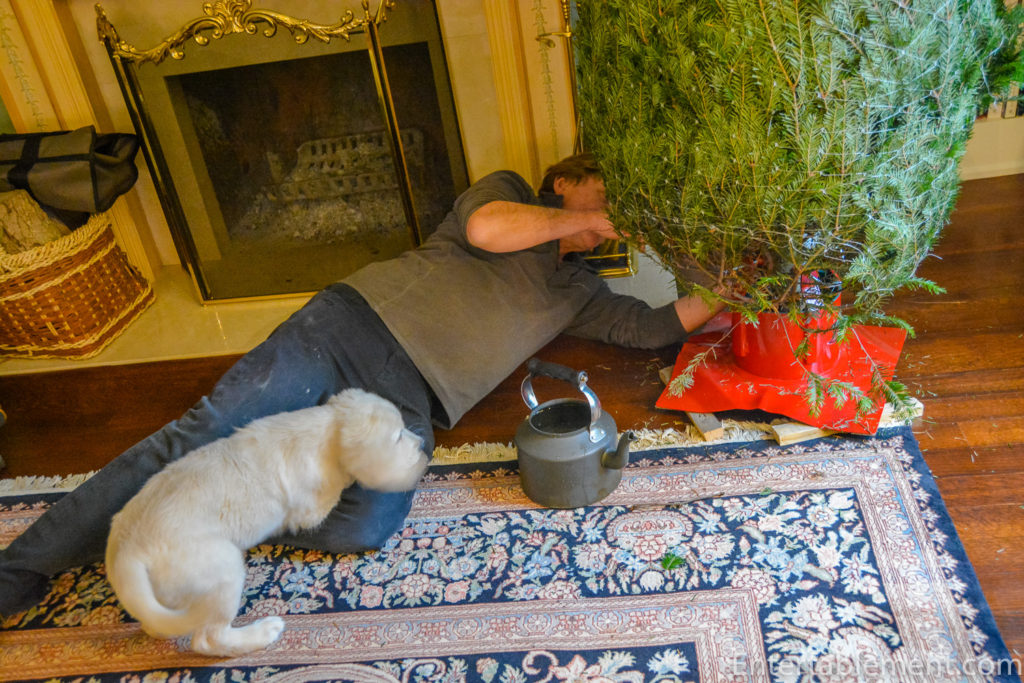 An update on the Adventures of Dundee and Clementine coming up soon. 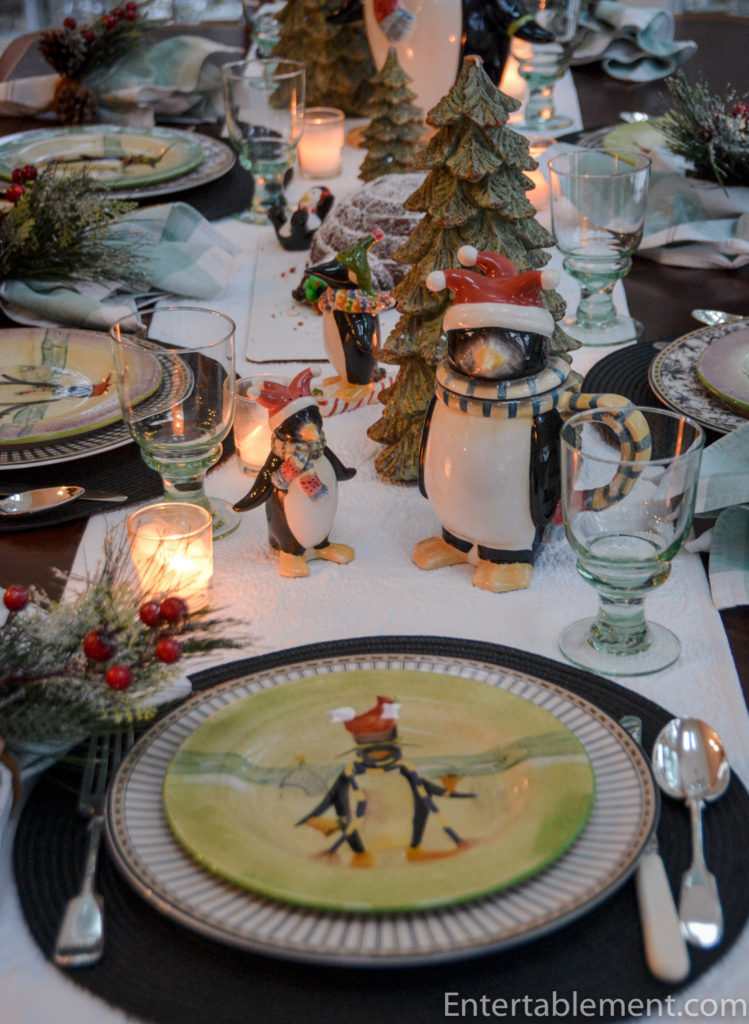