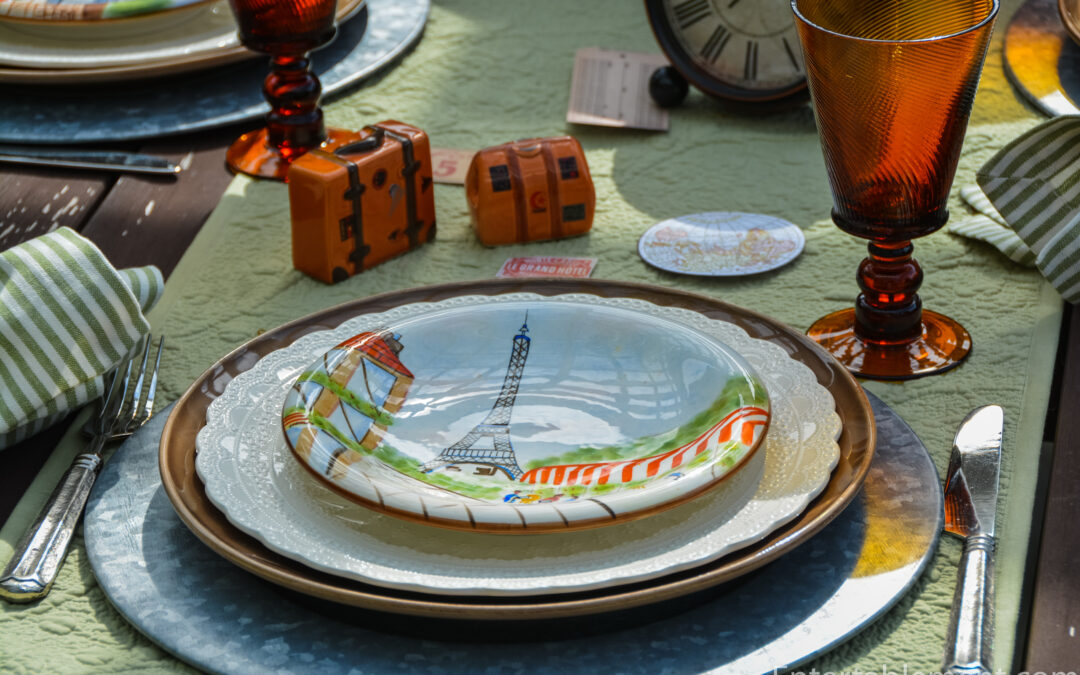 Labour Day weekend is upon us, officially the end of summer. So let’s sneak in one more summer tablescape and make it inspirational. 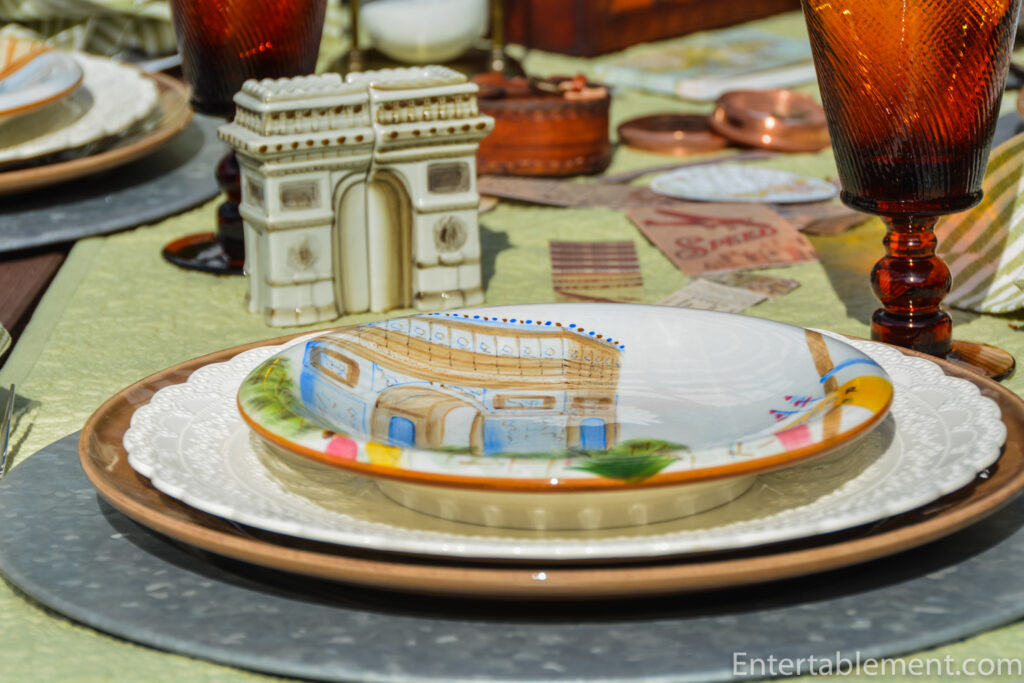 Pack your bags and join me in Paris. 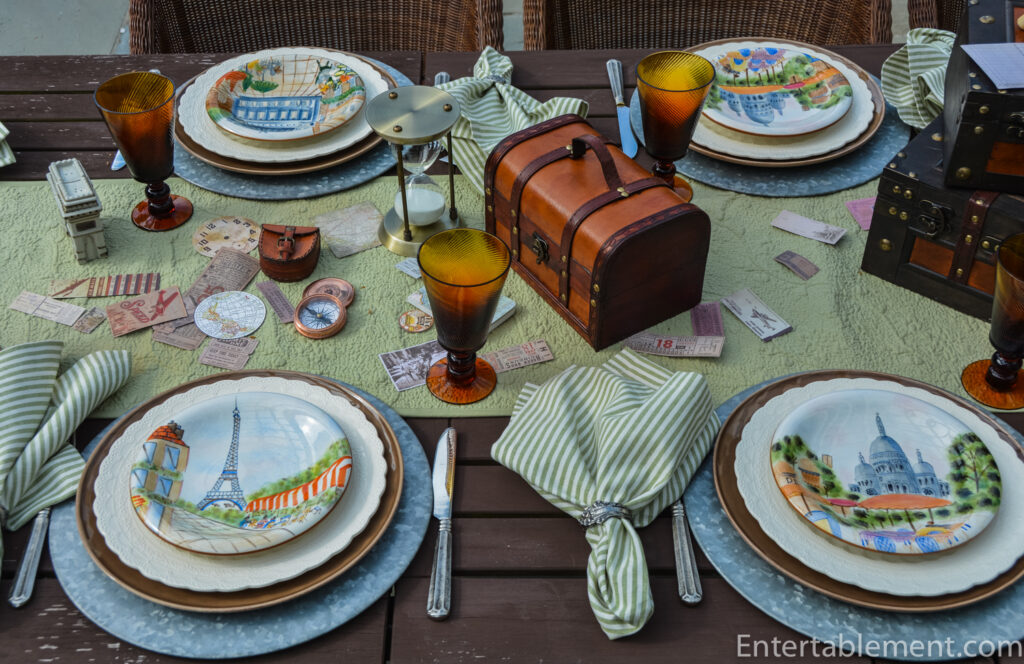 American Atelier produced Paris dinnerware from 2002 to 2005, with scenes of four different famous landmarks in Paris. The Eiffel Tower, naturally. This iconic landmark was built from 1887 to 1889 as the entrance to the 1889 World’s Fair; it’s still the most-visited fee-charging monument in the world. 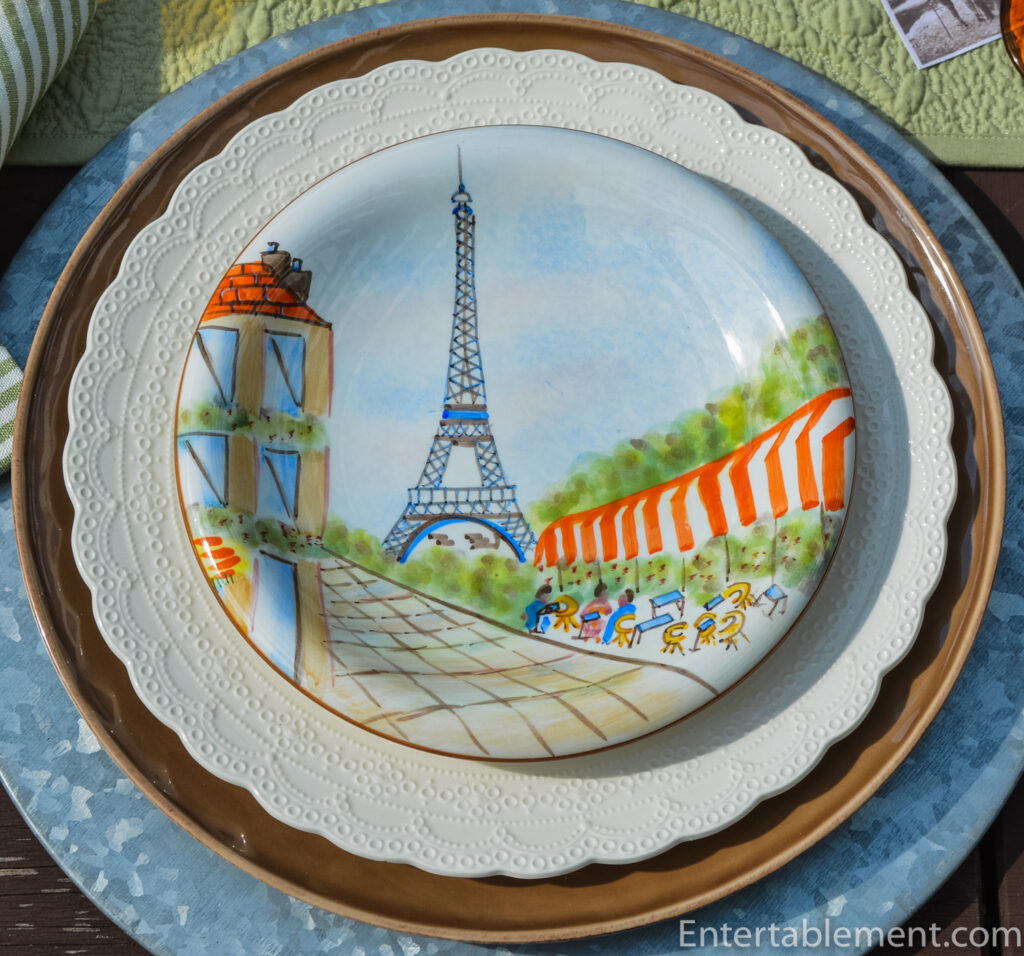 The Sacré-Cœur, whose official name is Basilique du Sacré-Cœur, or Basilica of the Sacred Heart of Paris. Located at the summit of Montmartre, the highest point in Paris, it’s the second-most visited monument.  It’s relatively modern; designed by Paul Abadie, construction began in 1875 and was completed in 1914. Since 1885, the Basilica has maintained the perpetual adoration of the Holy Eucharist. 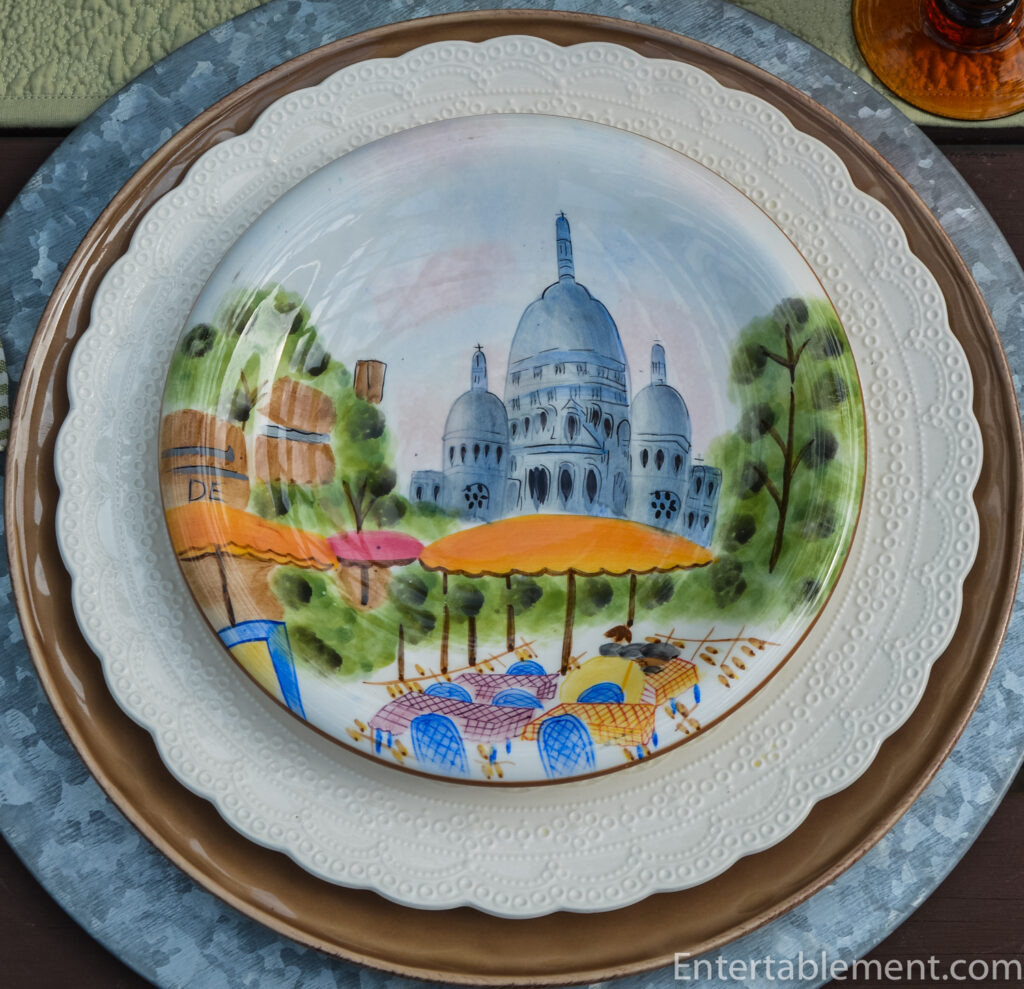 The Arc de Triomphe de l’Étoile translates to “Triumphal Arch of the Star”‘. It is located at the western end of the Champs-Élyséesa and honours those who fought and died for France in the French Revolutionary and Napoleonic Wars. The names of French victories and generals are inscribed on its inner and outer surface, and the Tomb of the Unknown Soldier from World War I lies beneath in the vault. 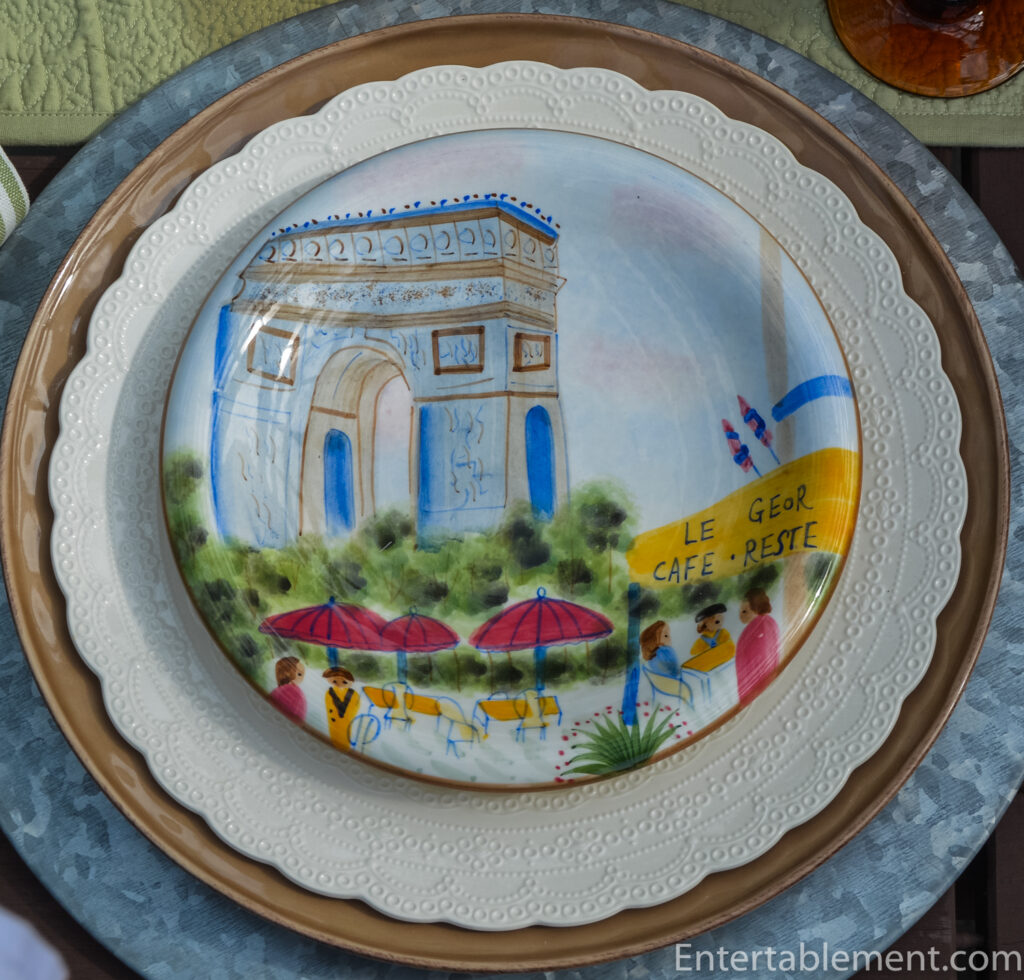 The last one had me stumped for a while. Any guesses? 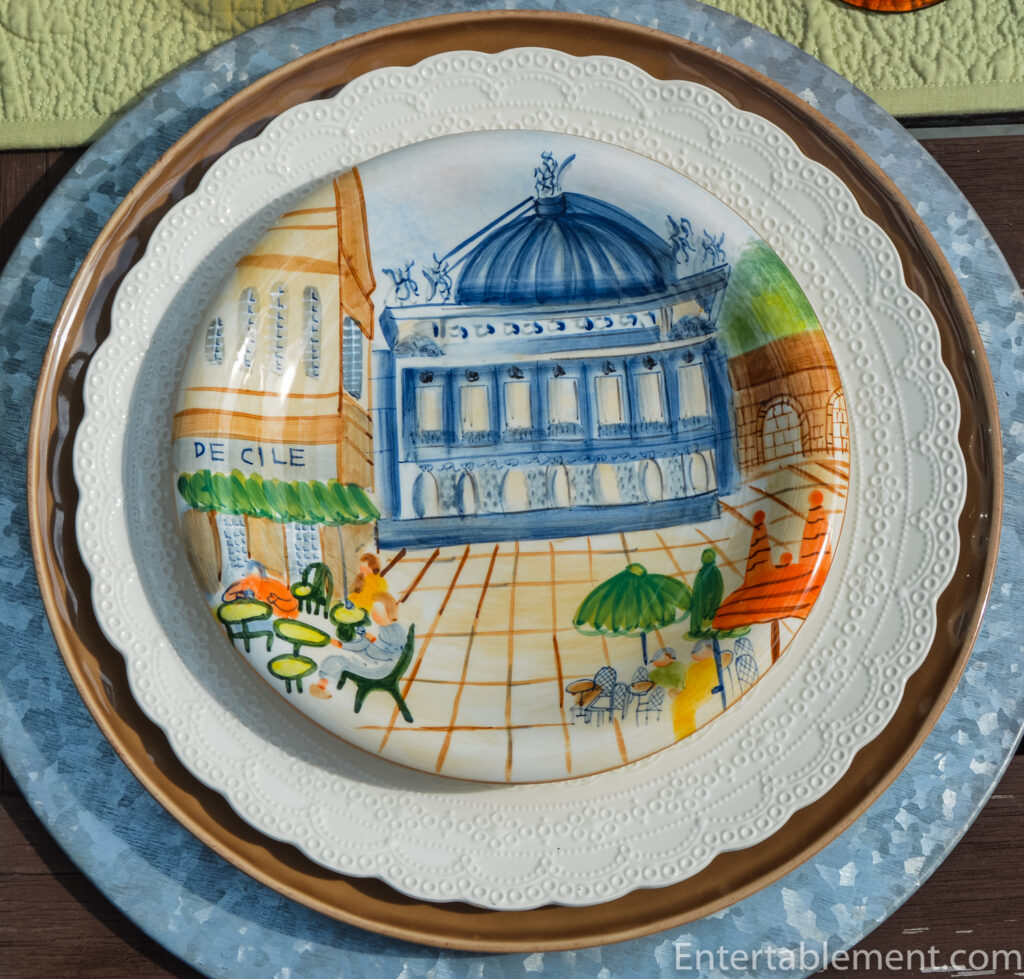 I believe it’s Philharmonie de Paris, which architect Jean Nouvel designed. It’s a cultural centre famous for holding concerts, exhibitions, conferences, and workshops. Though relatively small with 2,400 seats, it is designed to immerse visitors in the music truly—no single seat is further than 100 feet from the conductor. 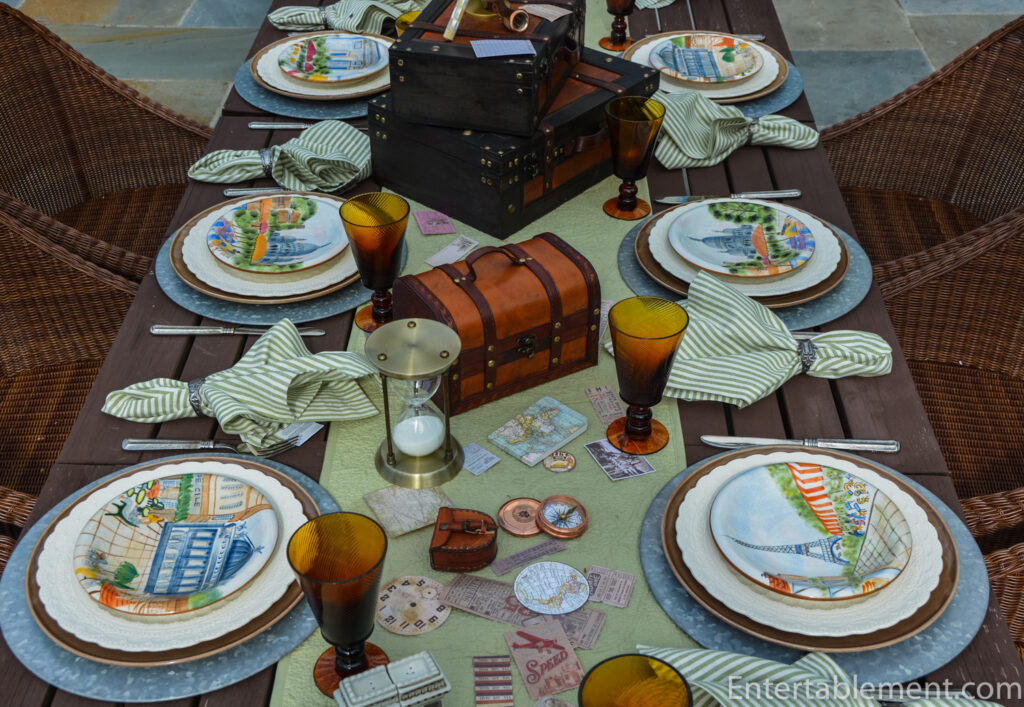 I had a hoot tracking down bits and pieces to augment the travel theme. A little globe, some opera glasses and travel ephemera—event tickets, rail passes, luggage tags and more. 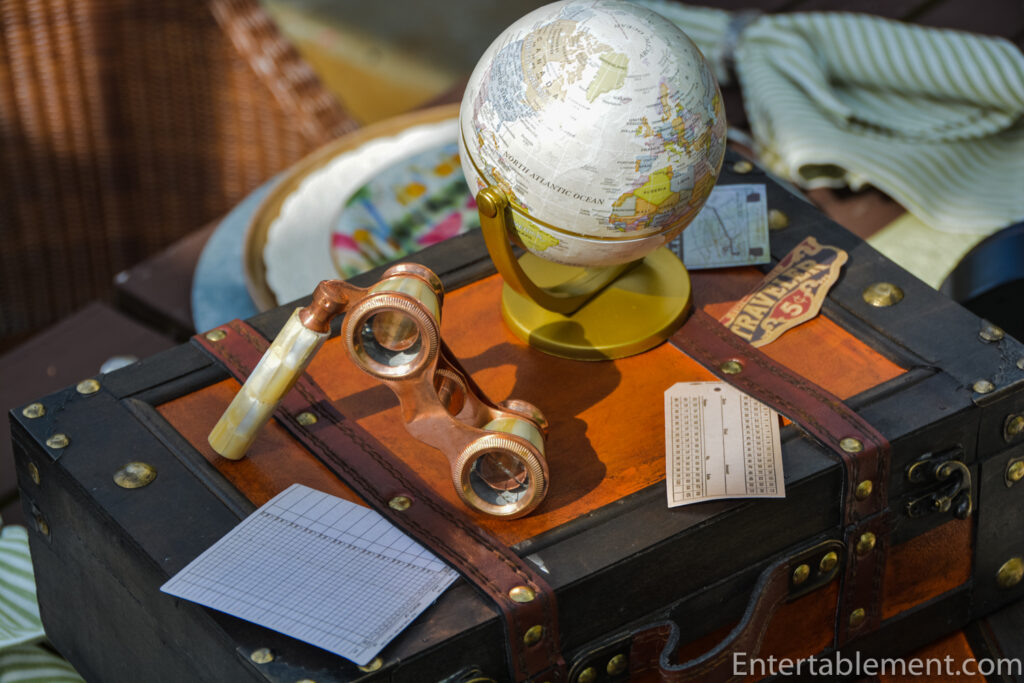 Pre-mobile phone, it would have been handy to keep a compass on hand. 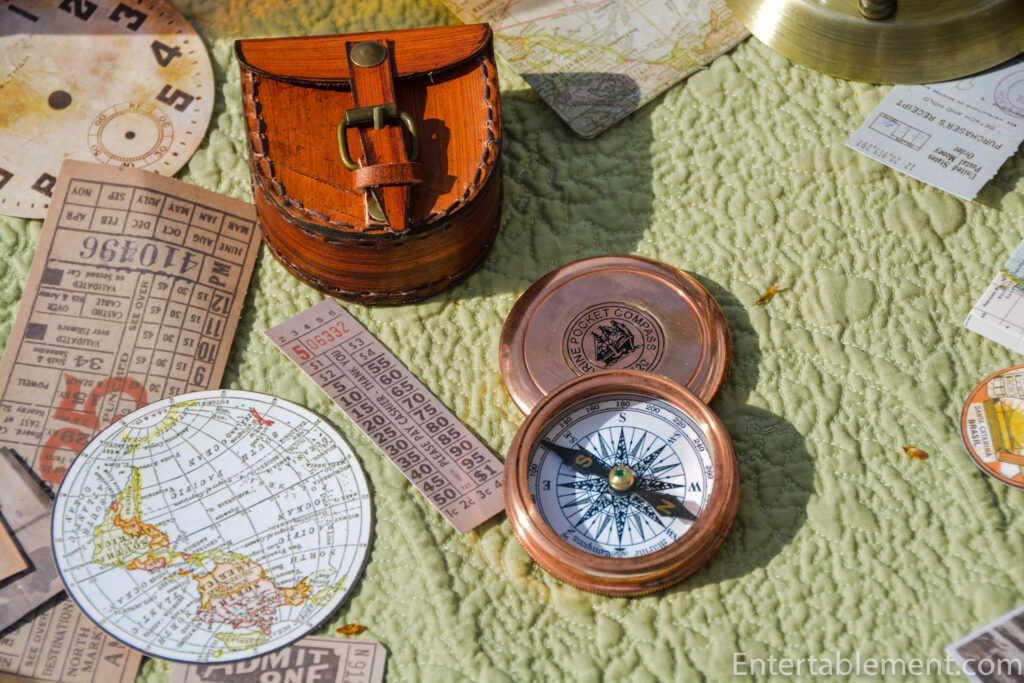 Of course, no journey is complete without suitcases. Ladies would have taken a cosmetic suitcase to hold all their lotions and potions back in the day. But, ah, that was before the clear plastic bag and the 100 ml limit. Travel has certainly lost some of its panache…

I even managed to track down luggage-shaped salt and pepper shakers. 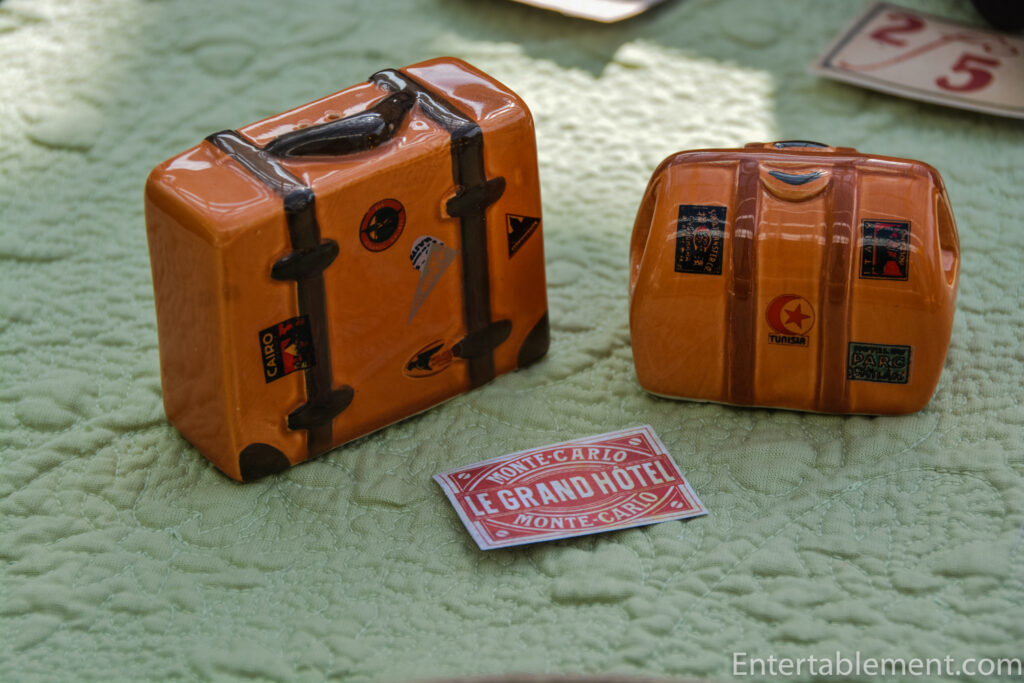 And a set in the shape of the Arc de Triomphe. 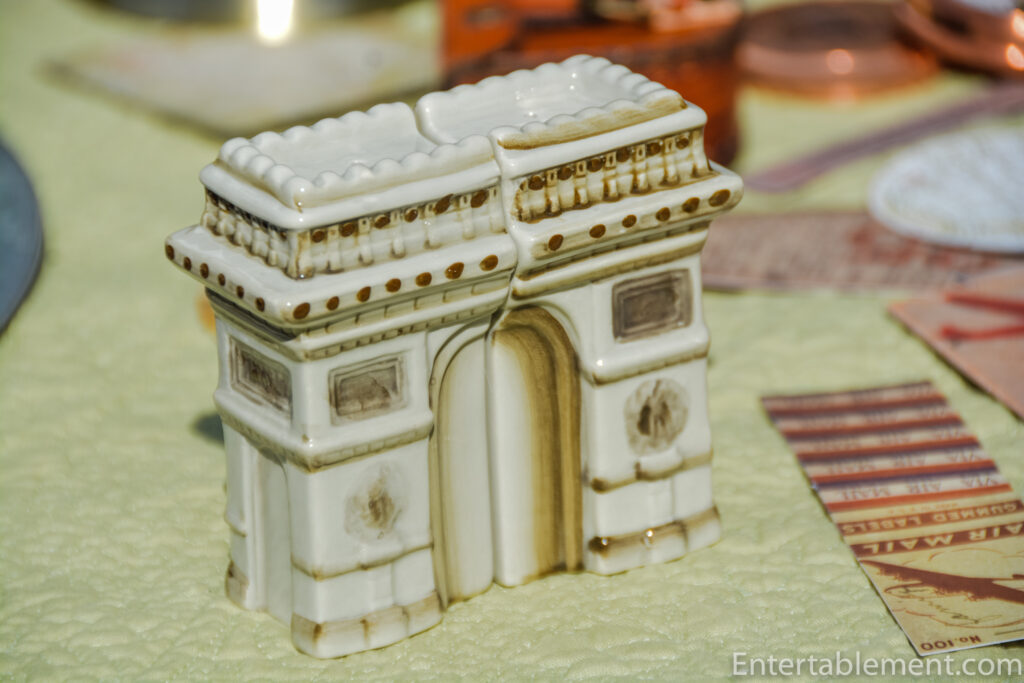 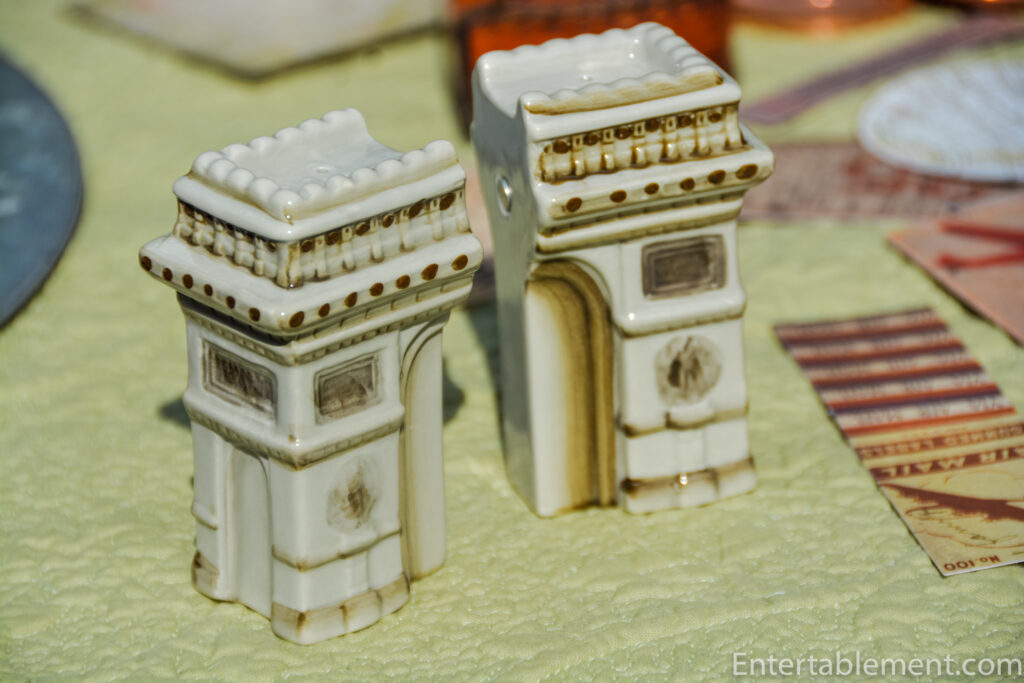 Amber Trist water glasses from Williams Sonoma are a nod to the fall season. 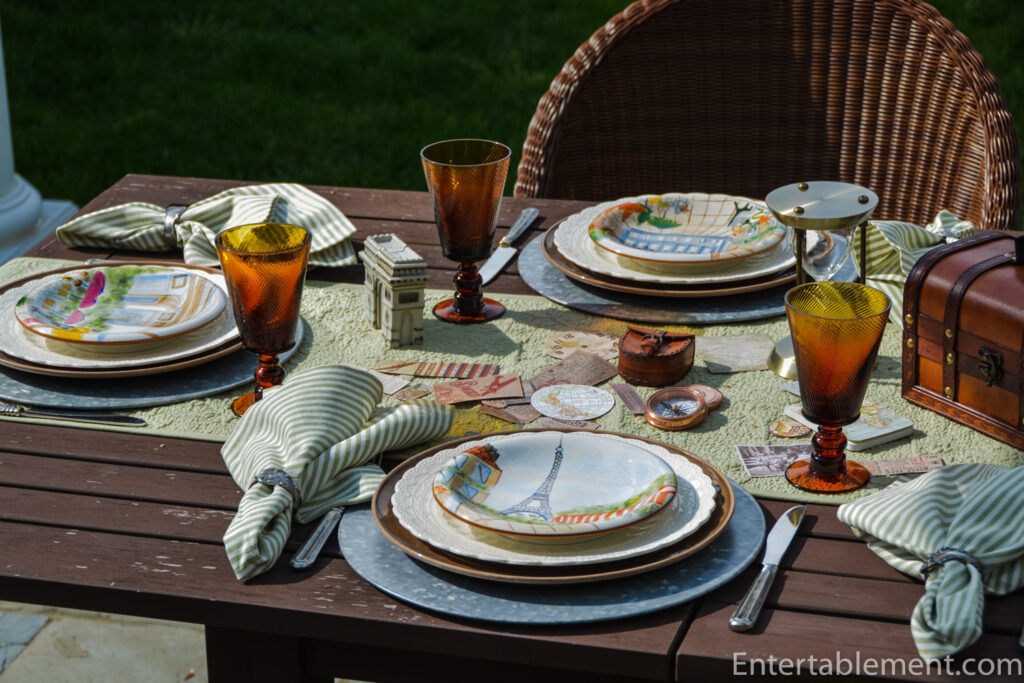 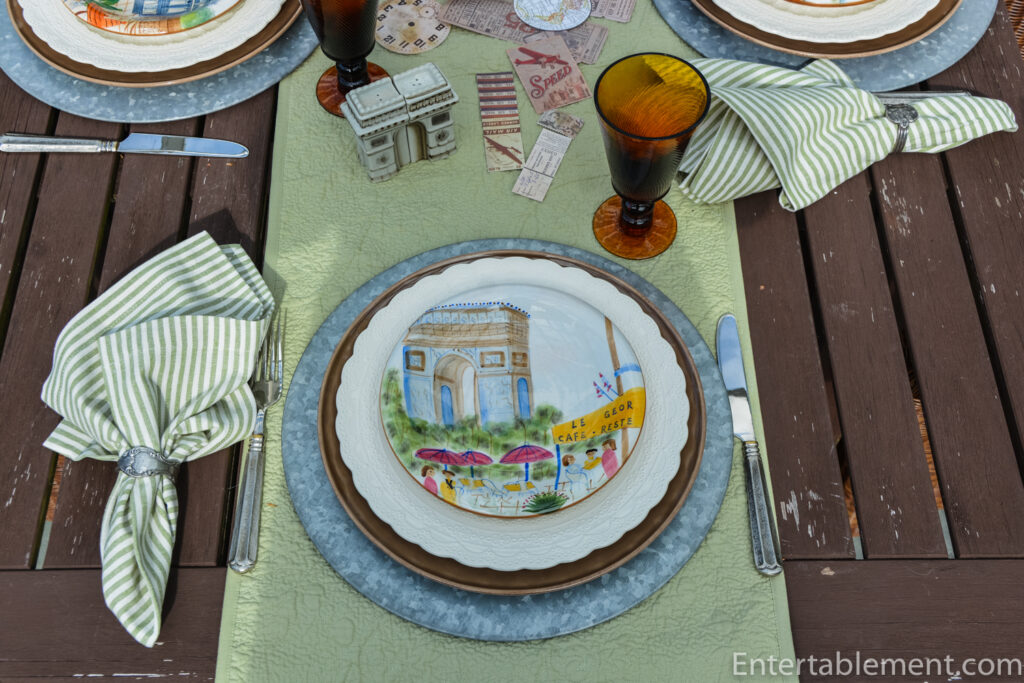 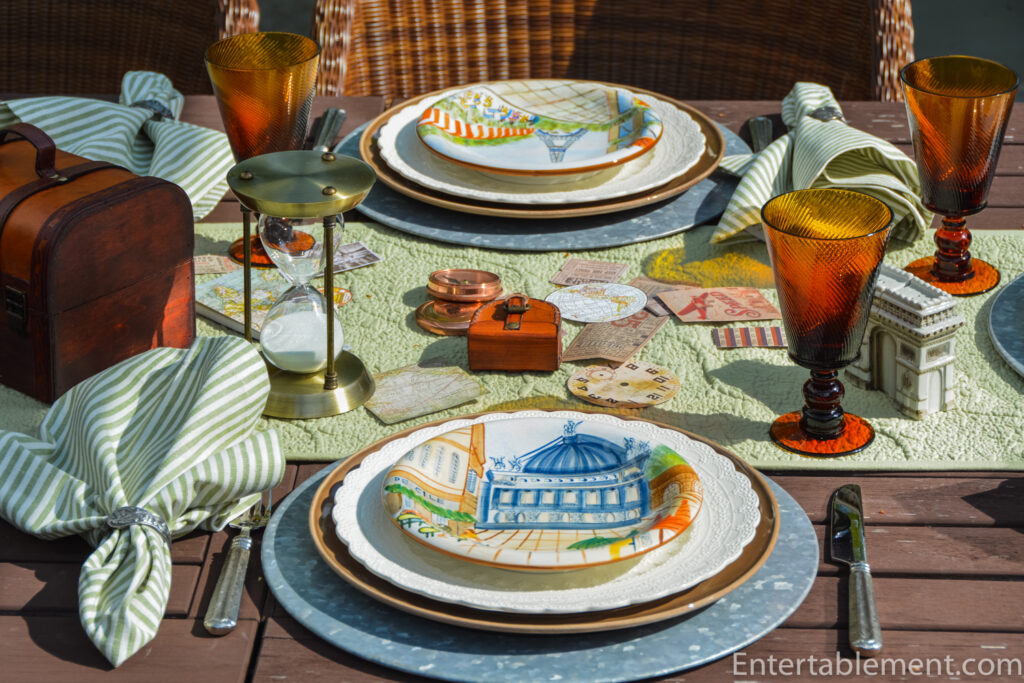 Some exciting news! The inaugural publication of Entertablement’s Seasonal Quarterly is available at Amazon. After some back and forth, Mary Plumstead and I settled on the Kindle format rather than a flipbook or magazine, as it offered the greatest digital stability and could be viewed on many different devices. The plan is to produce four of these each year, one for each season. 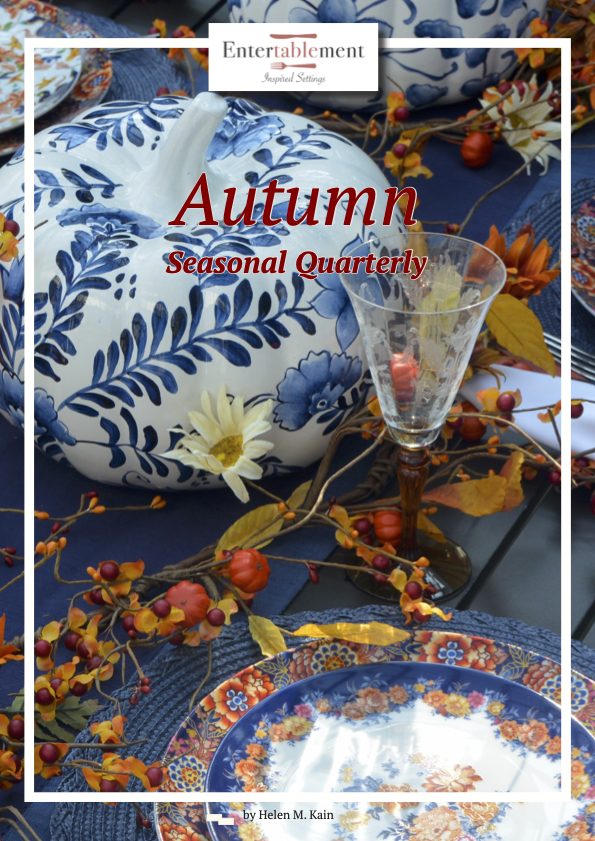 More details are available at the Entertablement Books site. In addition, Mary has set up a flipbook so you can get a feel for the contents. I’ll be interested in what you think!