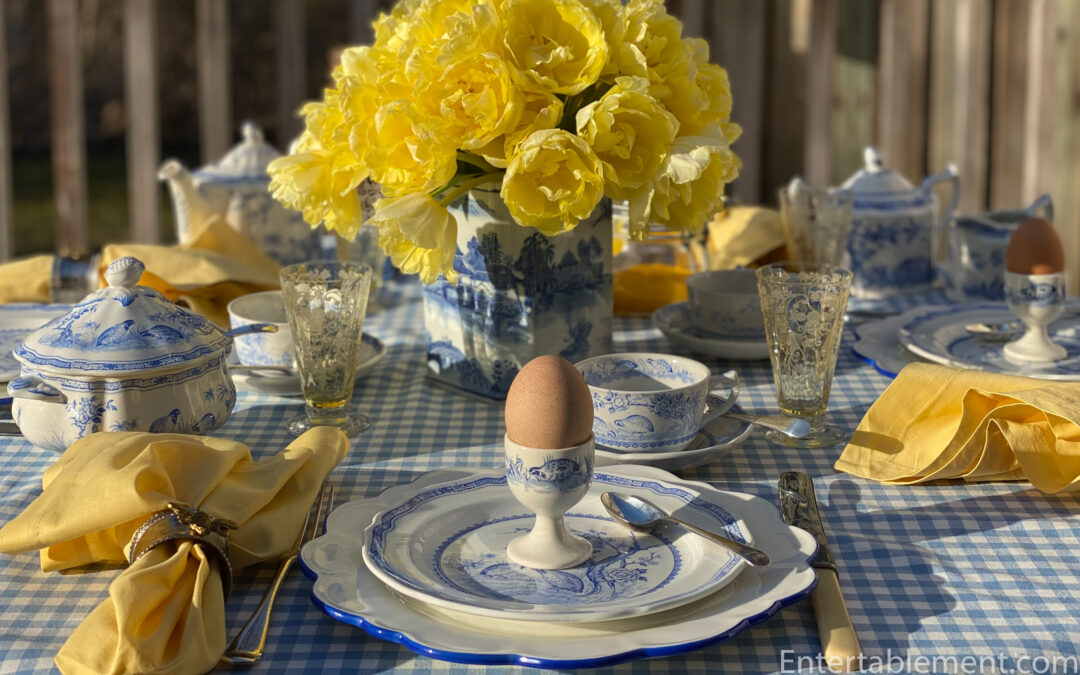 It is almost peony time. The plants have gone from little red nubs poking through the ground to three-foot bushes in weeks. The flower buds are waxing fat, and my anticipation is mounting. I can’t wait! But in the meantime, we have peony tulips to help ease my impatience. 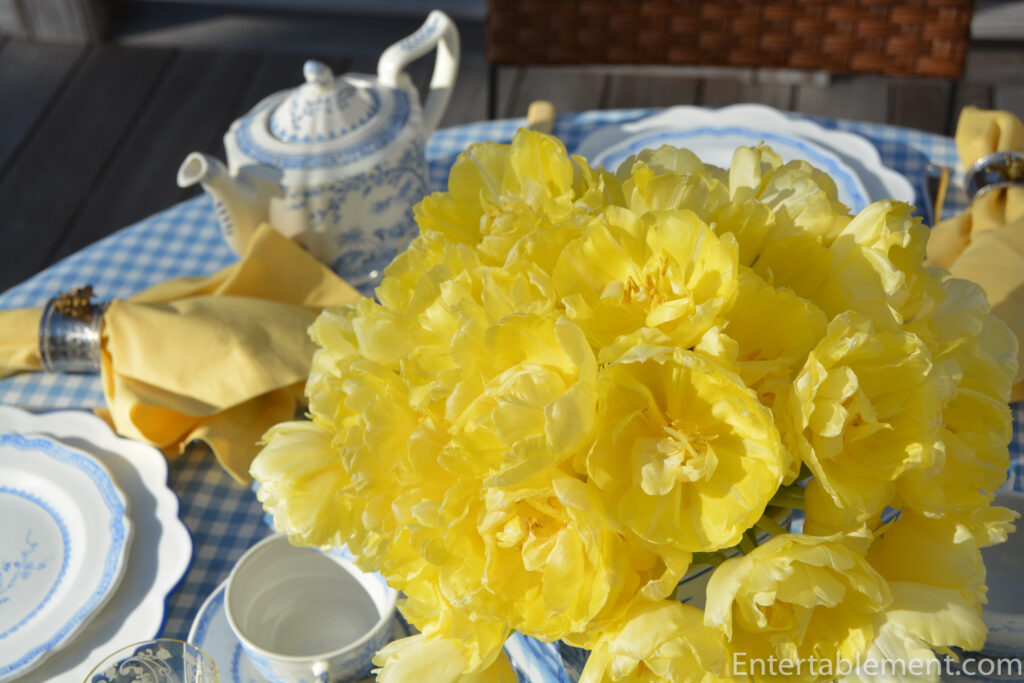 Soft yellow petals float in a feathery dance on this breakfast table set with Quail Blue, a pattern for whom life began at Furnivals of Stoke-on-Trent, Staffordshire, in 1913, the same year the company was acquired by John C. Bailey of Doultons. He bought the pottery as an independent business for his sons. 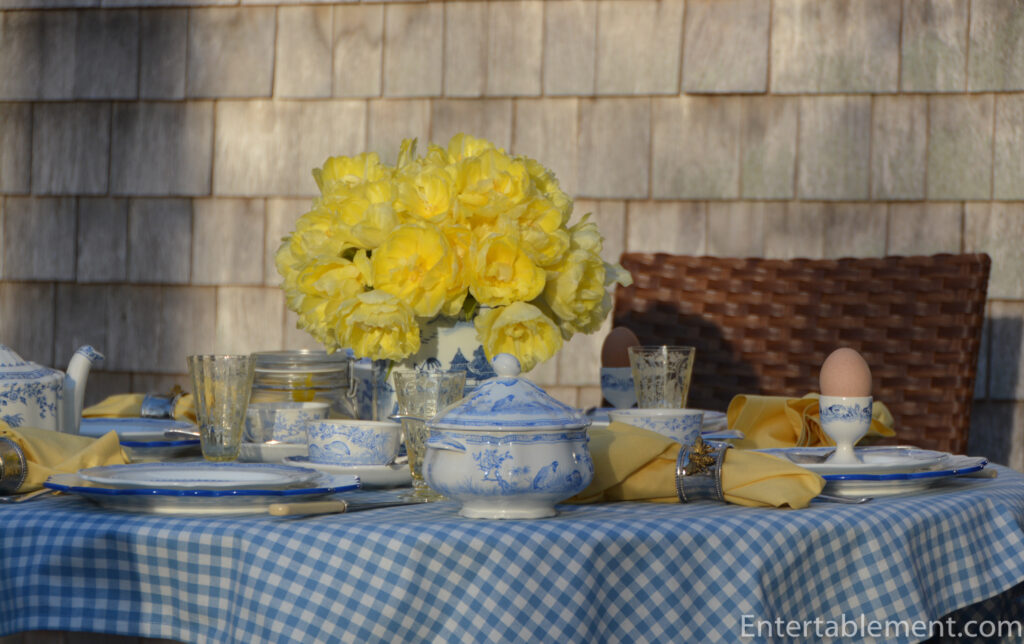 Furnivals (1913) Ltd was in turn acquired by Barrett’s of Staffordshire Ltd in 1967. But sadly, labour shortages frustrated Barrett’s plans to modernise and expand the business and the factory closed in 1968. 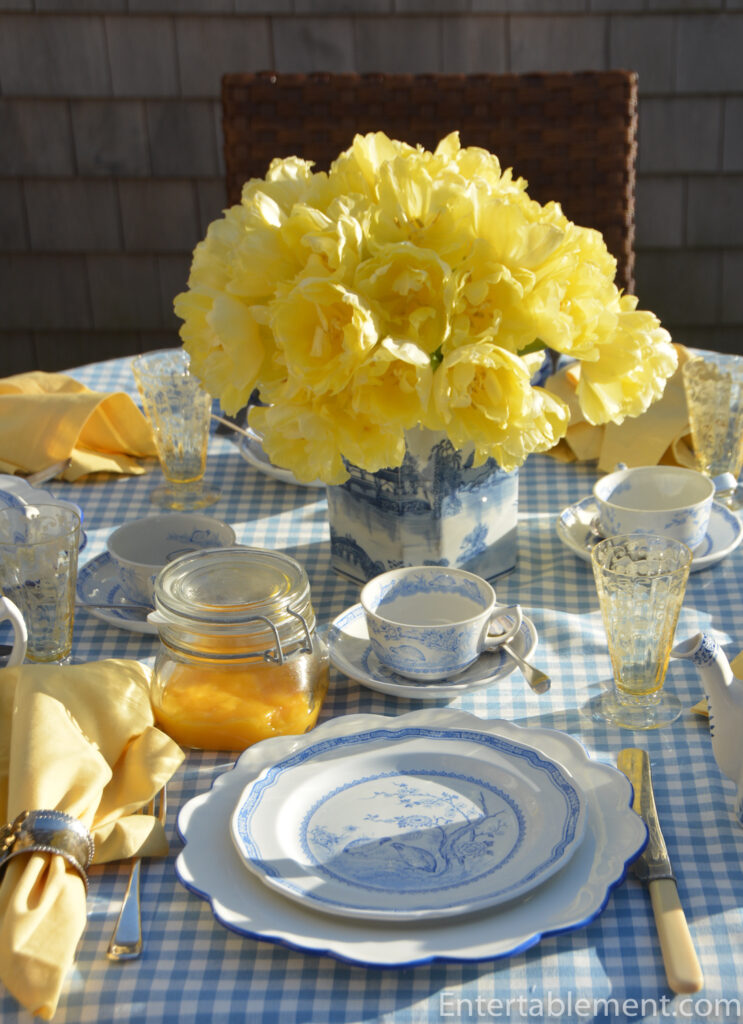 In 1969, the Company trade name was purchased by Enoch Wedgwood (Tunstall) Limited, which, in its turn, was taken over by the Wedgwood Group. As the Enoch Wedgwood works began to wind down, the Mason’s factory (another Wedgwood Group member) began manufacturing several Furnival patterns, including Quail; hence later pieces of the design are marked Mason’s. 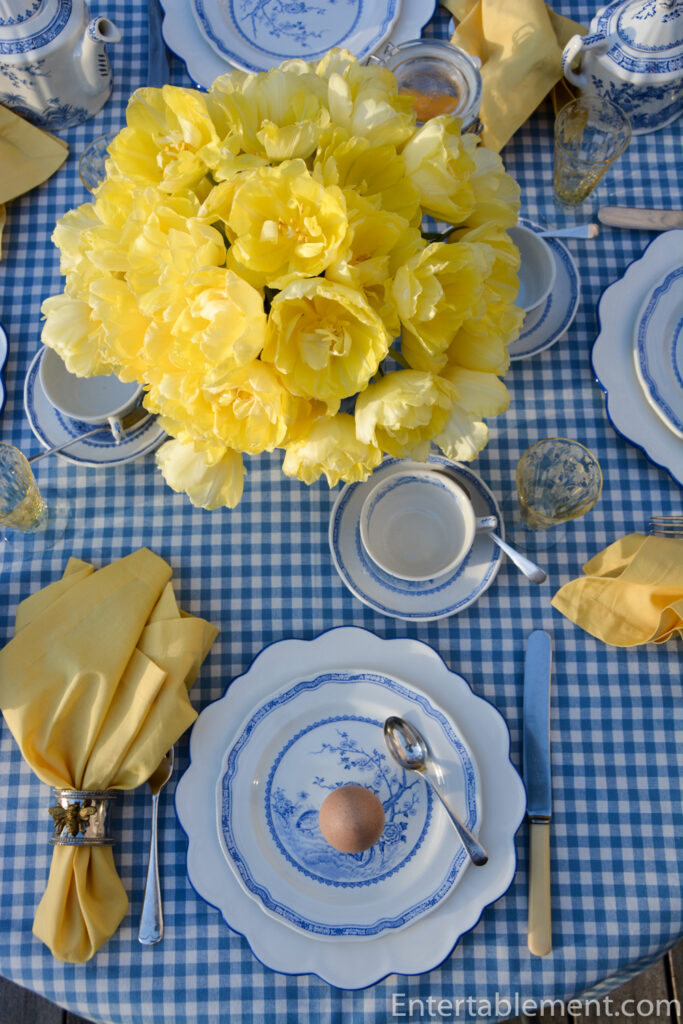 This collection started with the egg cups. We are enthusiastic consumers of “dippy-do” eggs in this house. 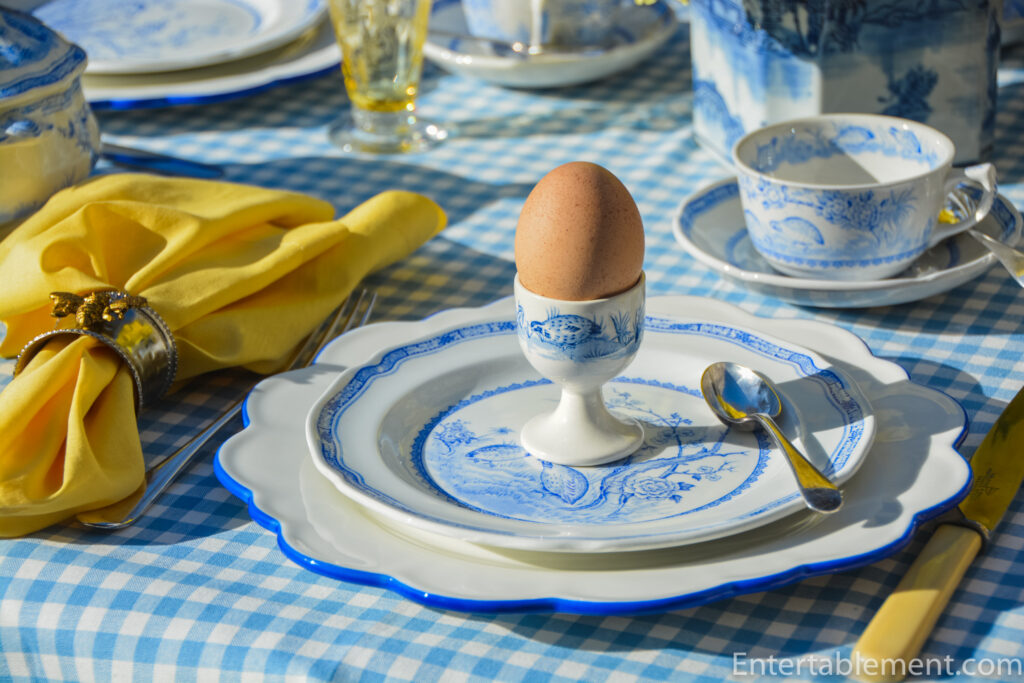 And I couldn’t resist the beguiling little quail on the small egg cup. So I started picking up pieces here and there on eBay. 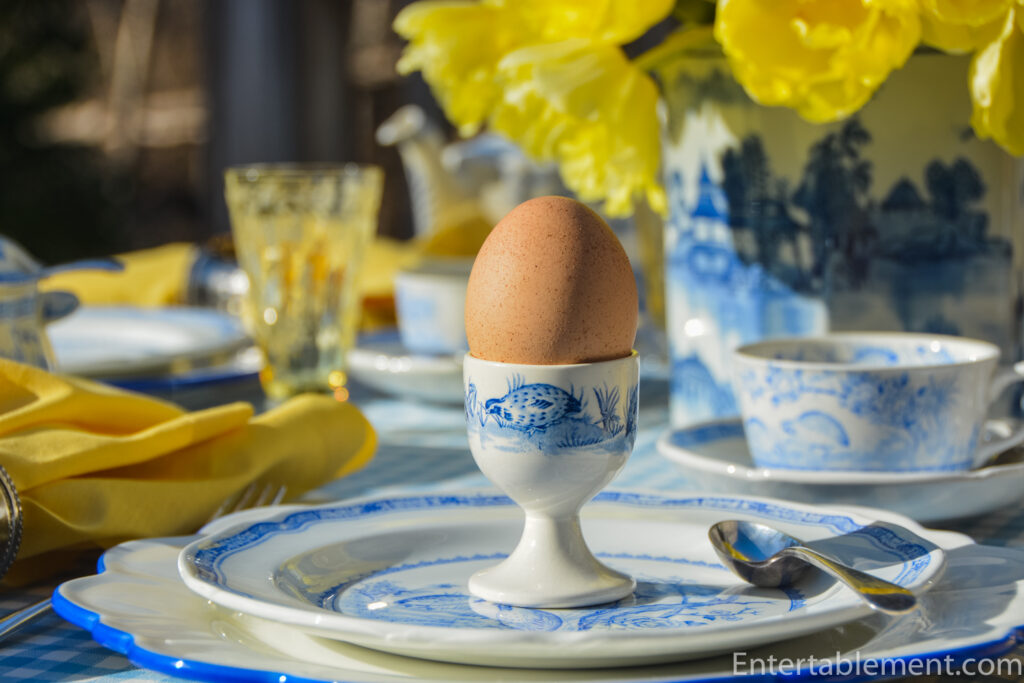 The covered sauce bowl was next. 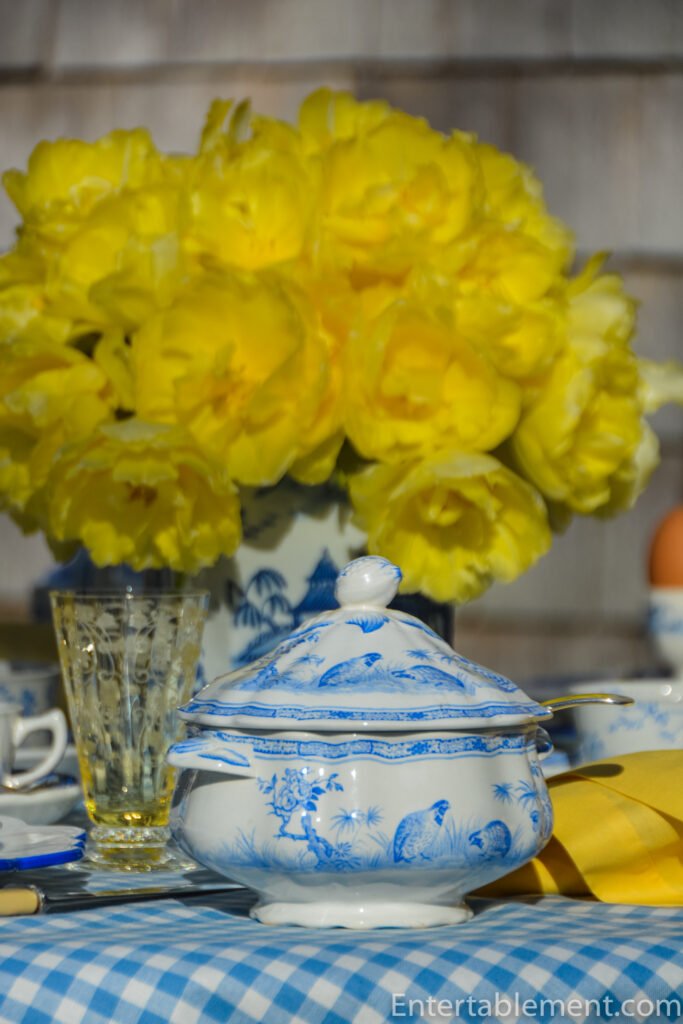 Shortly after that, a tea set comprising teapot, cream and sugar and half a dozen cups with saucers appeared. 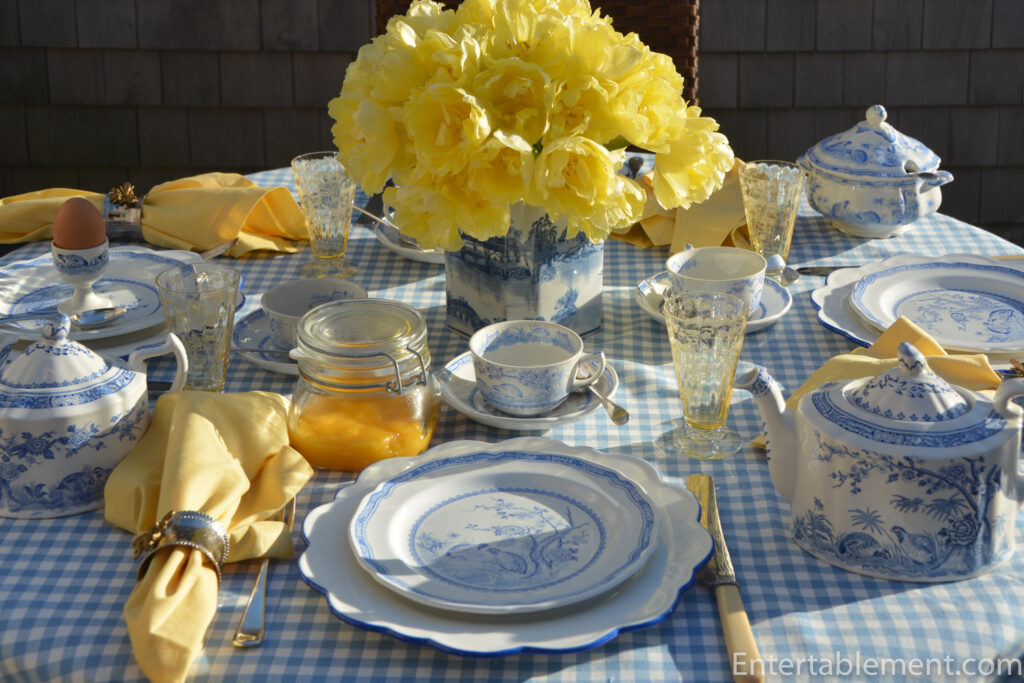 Oddly, the salad plates were the last to join the party. They pair nicely with Aerin scalloped edge dinner plates, and I like the contrast of the clean white background. 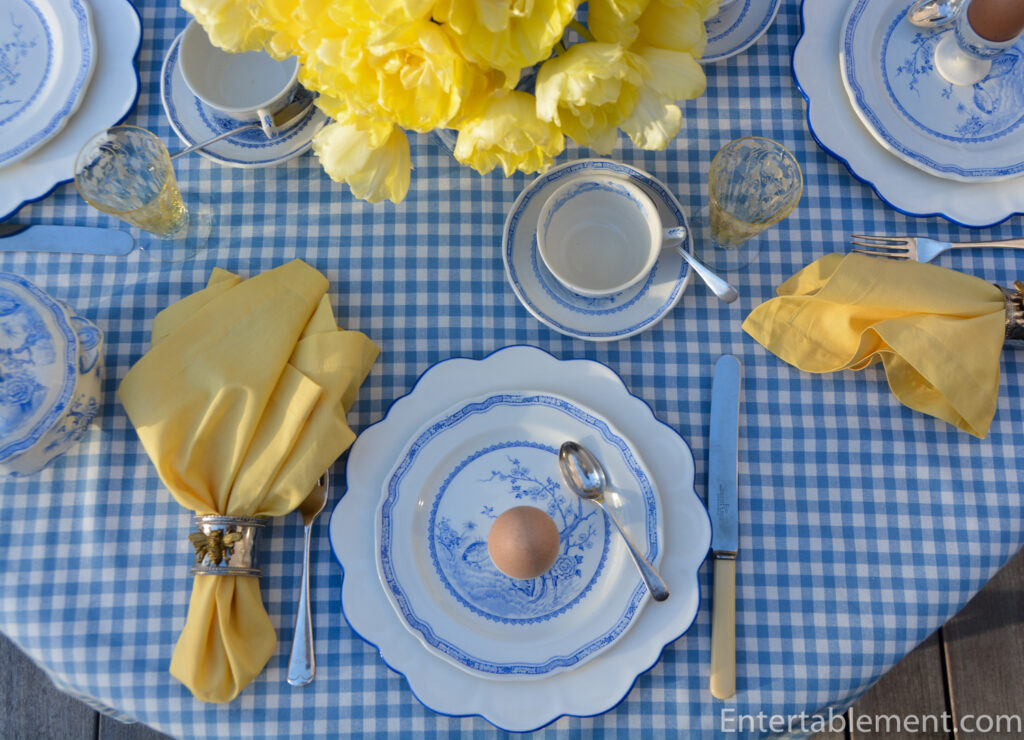 Having used a gingham tablecloth, a plain napkin was called for. But we jazzed it up a bit with a bee embellishment (fridge magnets, no less) for the beaded napkin rings. 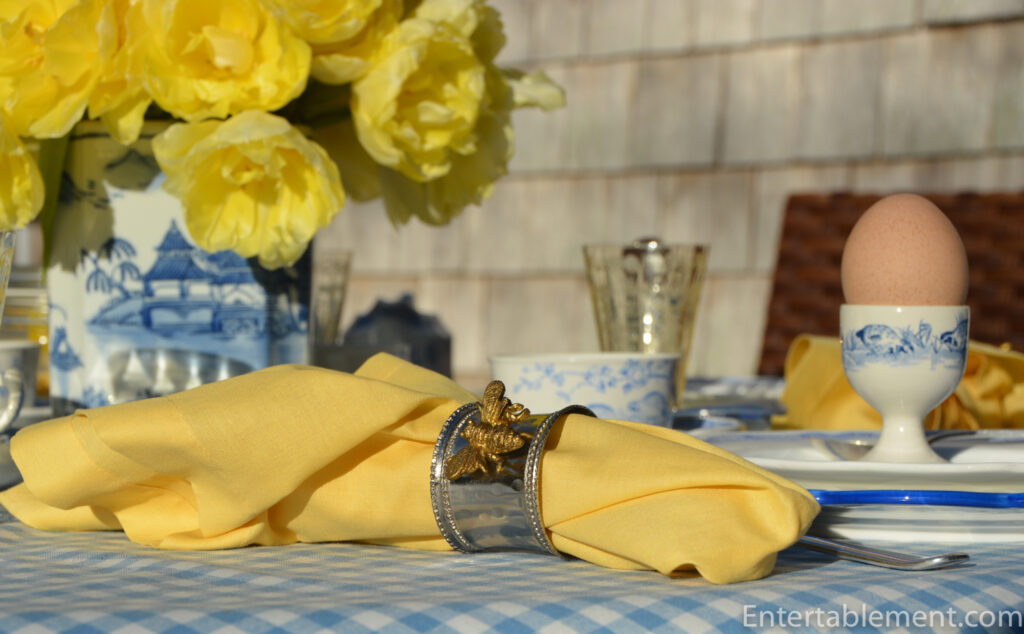 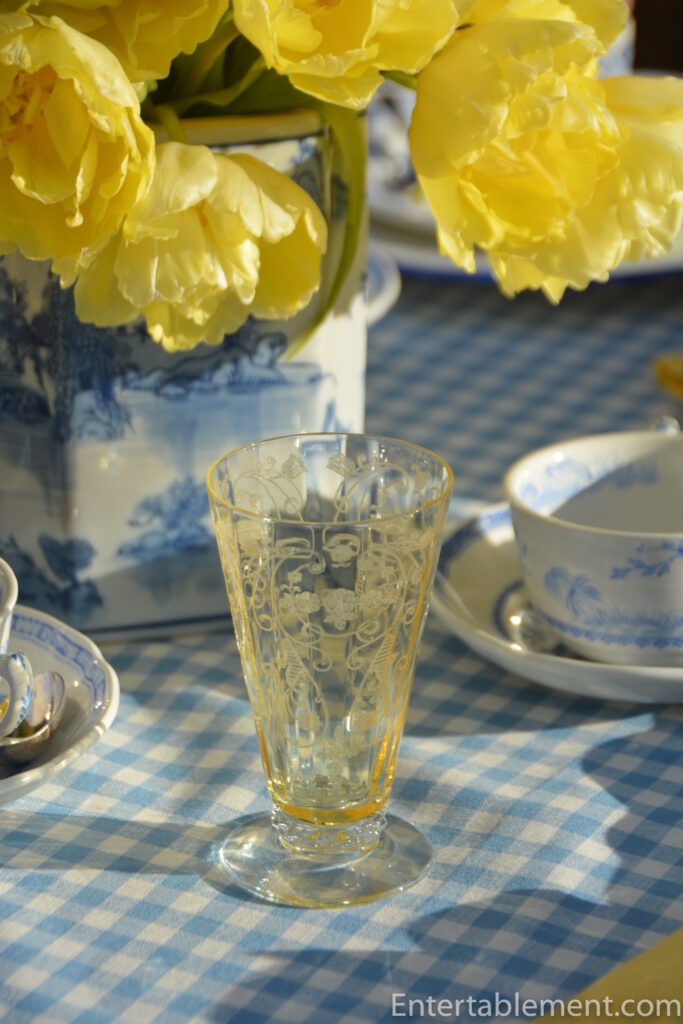 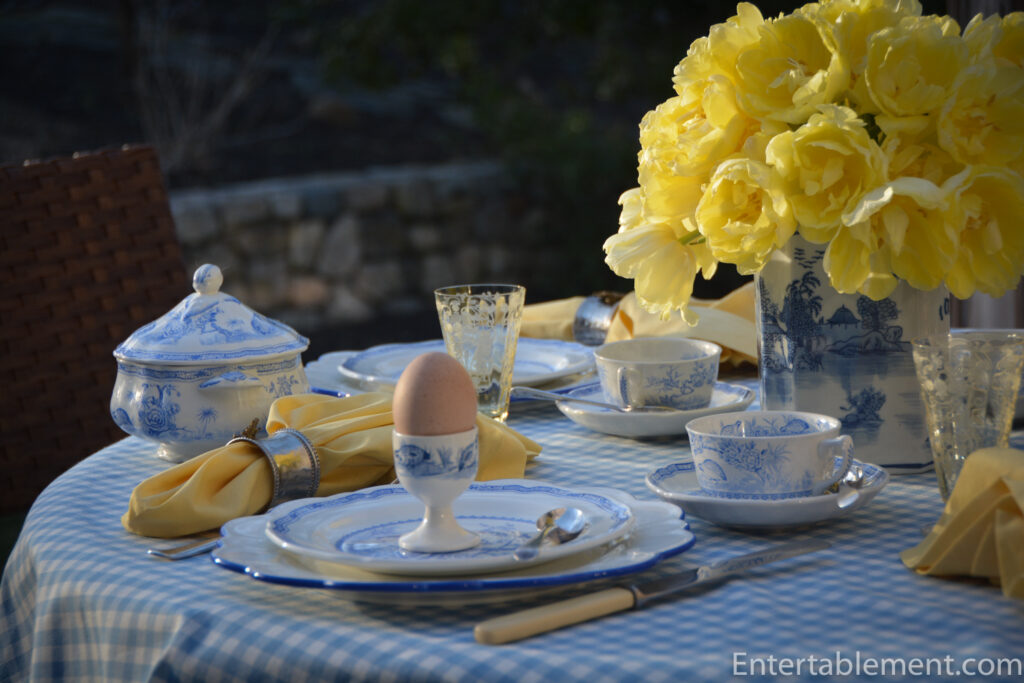 Speaking of peony tulips, I came across this spectacular display not far from our home on the Cape. We drove by last evening when the light was favourable, so Glenn obligingly stopped the car, so I could hop out and snap a couple of pics. 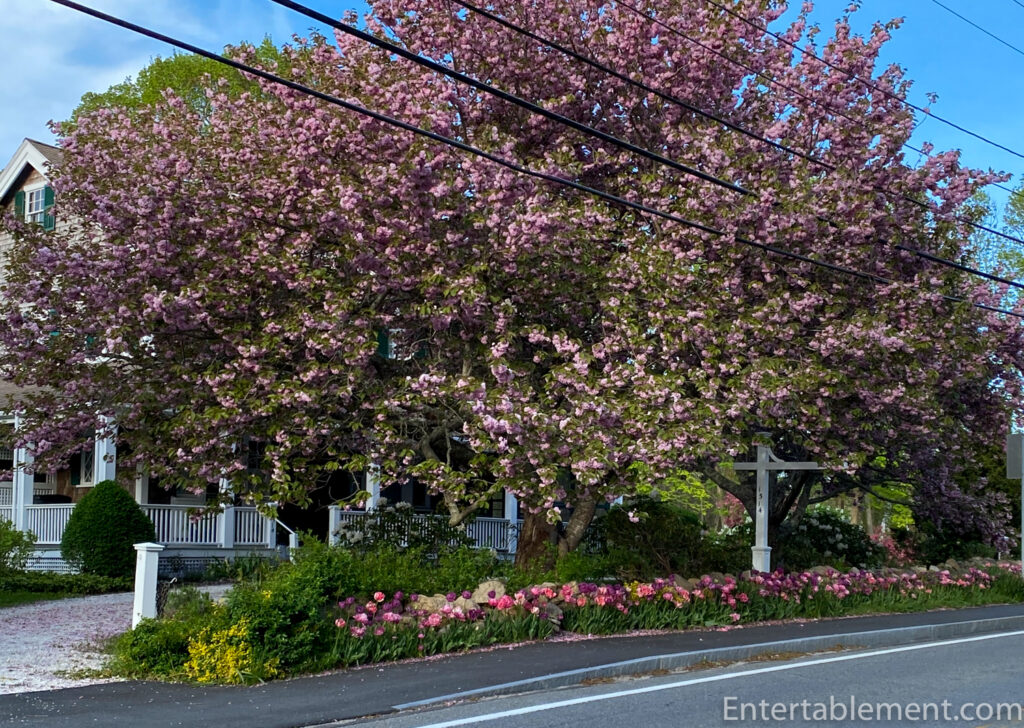 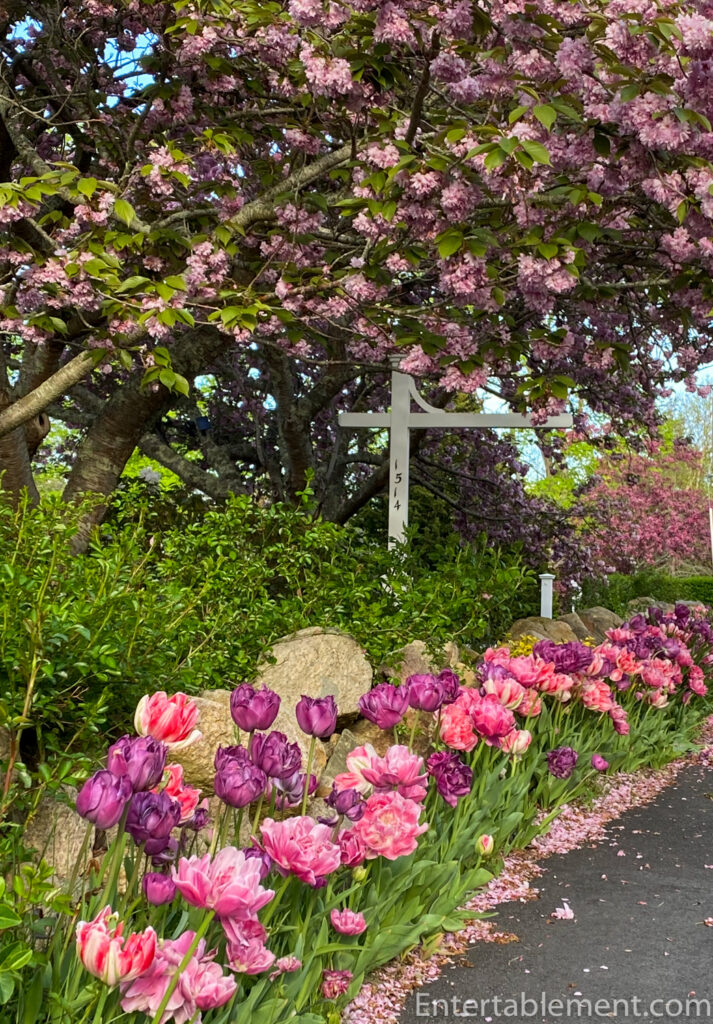 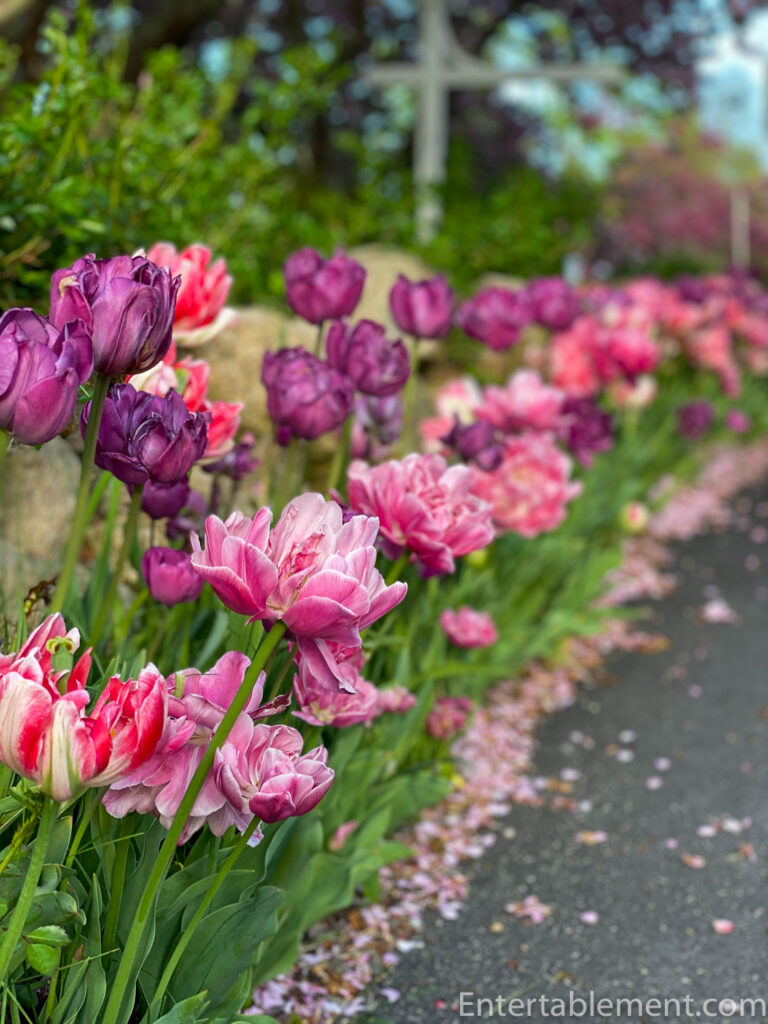 We caught the blooms just at the peak—another day or so, and they’ll be over. 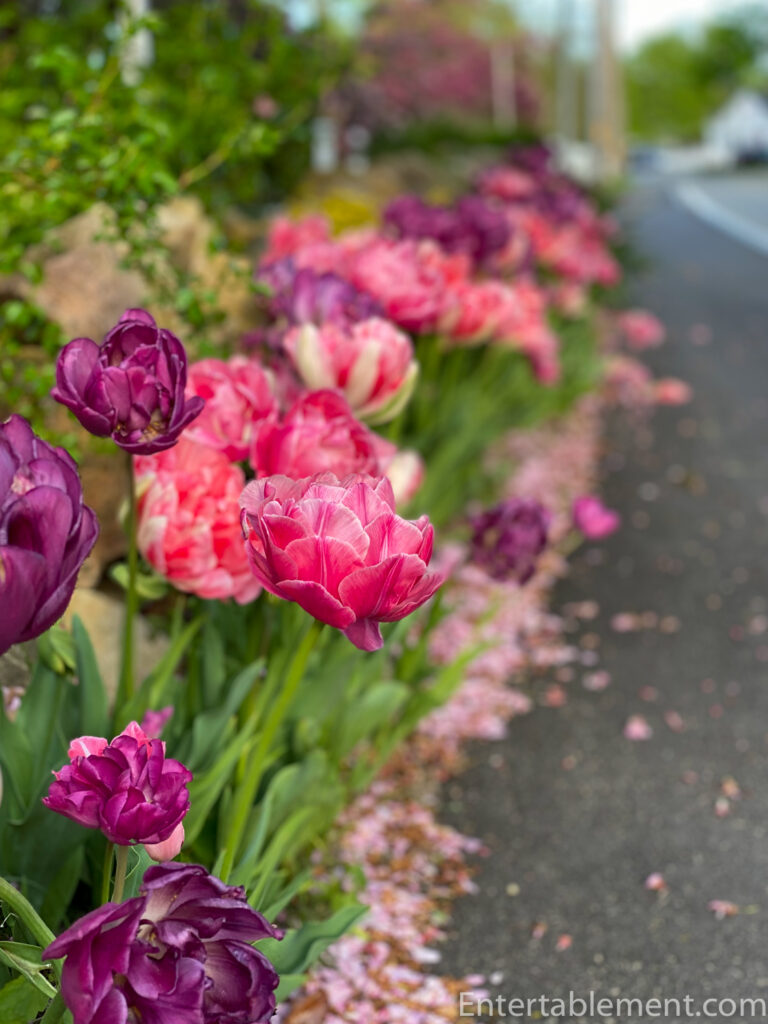 I’ll be interested to see if they come back next year. In my experience, tulips behave like annuals, despite the much-vaunted “long-lasting bulbs”. The squirrels make off with them; the deer chomp on the flowers (unlike daffodils, which they don’t touch. I’ve given up planting tulips and am very grateful to the owner of that house for planting these gorgeous blooms. 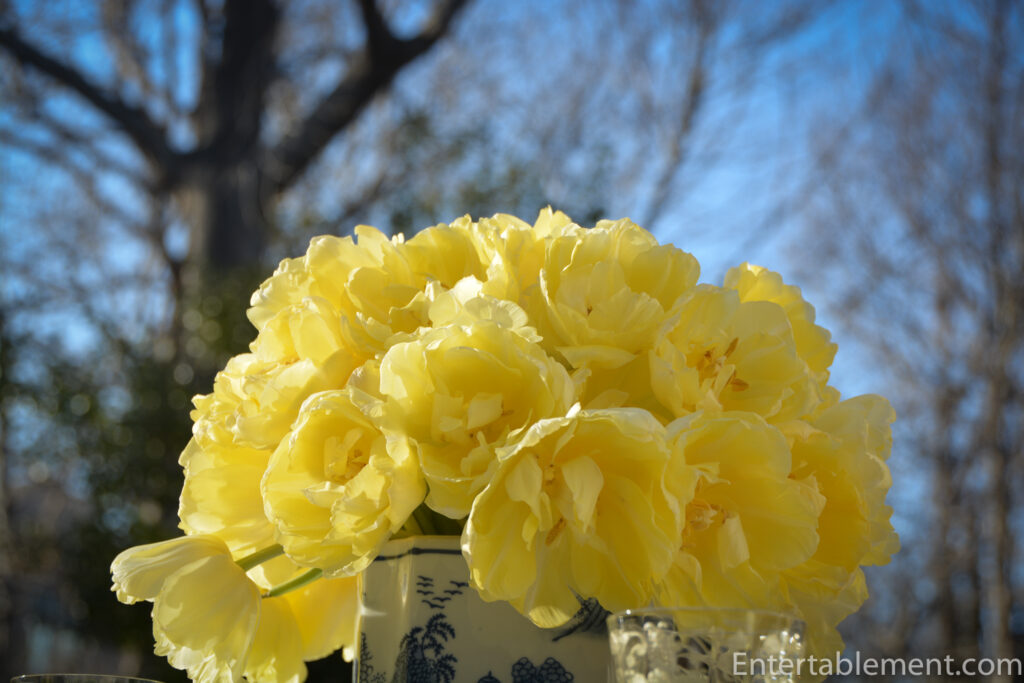 And to Trader Joe’s for stocking the ones for the Quail table. 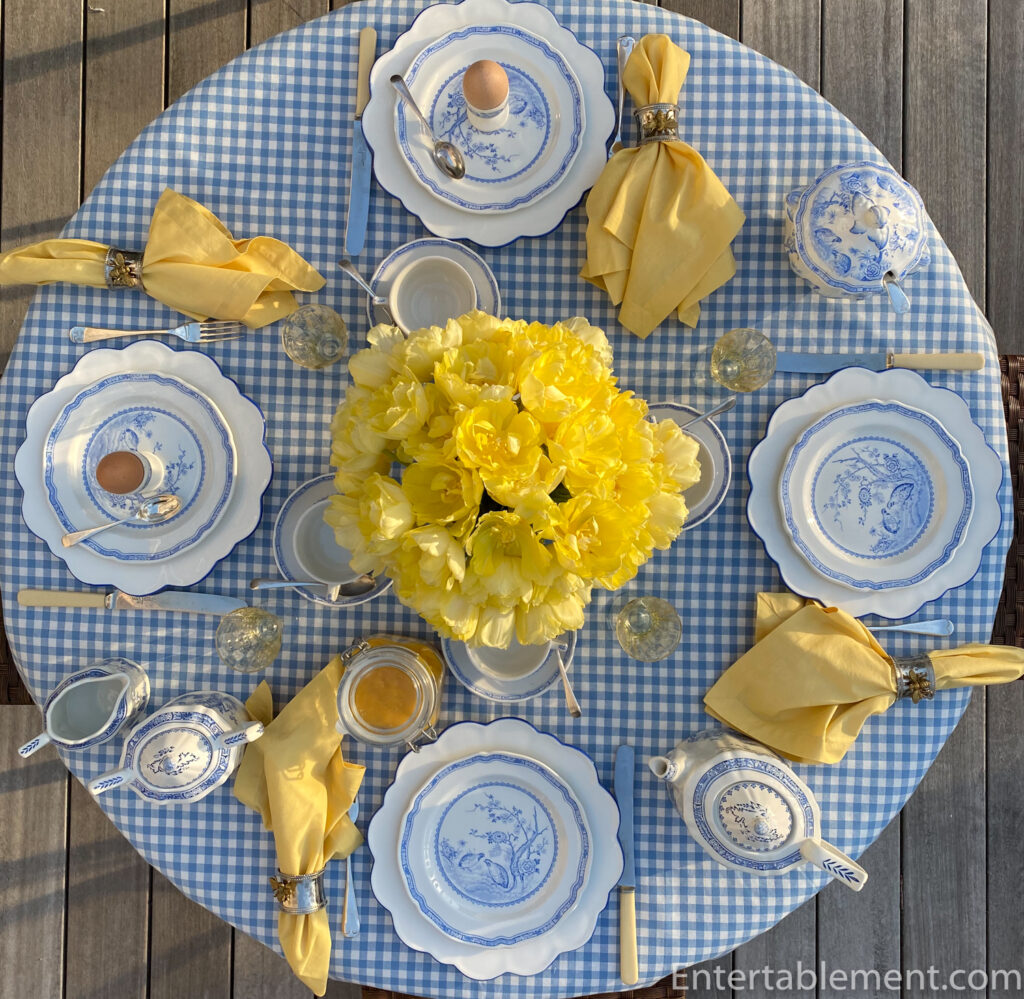 The weather has at last turned warm here; we enjoyed a long walk on the beach at low tide for the first time this season. Finally, summer is around the corner! The pups get their final shots this week, and they will soon be romping in the waves with Churchill. They’re growing like weeds; this is Marigold just a week ago. 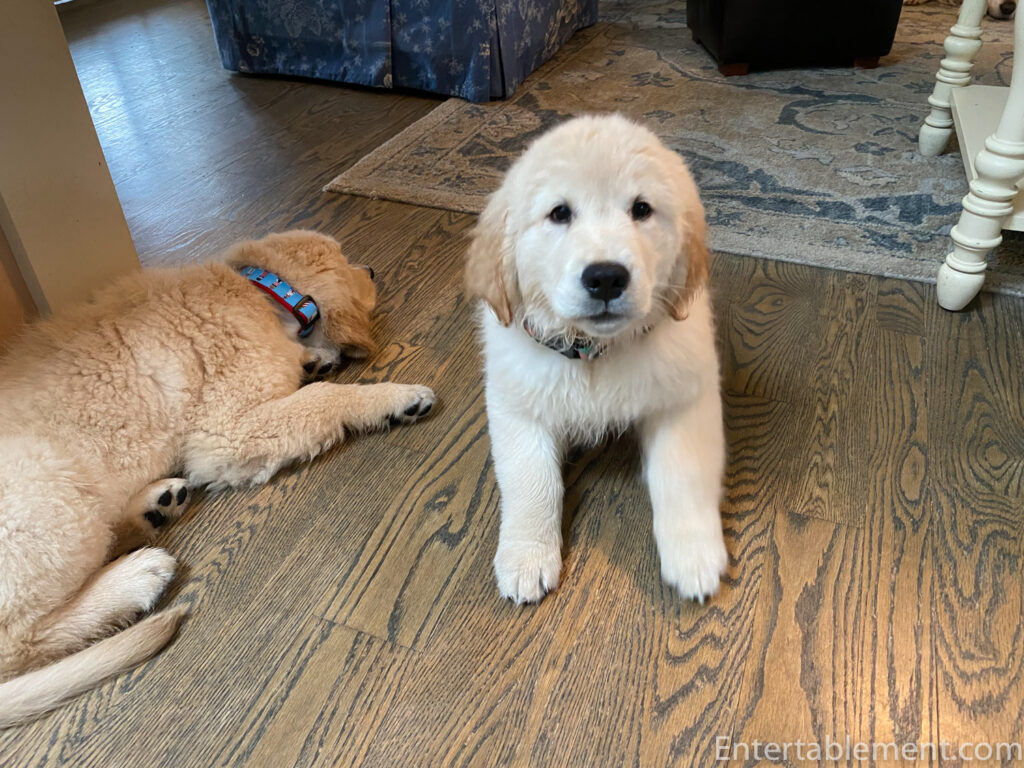 And here she is yesterday, sitting in front of the new puppy pen. The crate was getting to be a tight fit, so Glenn installed new gates, which worked like a charm. They withstand two enthusiastic little jumpers, and the door latch is a cinch to open. The gate swings inward and will remain open if desired so that the pups can go in and out during the day. They like to nap in there. The space is ample enough for them to play, and we can sequester them from the other dogs when they want to get down to some serious chomping on their chew sticks. (Churchill has been known to liberate their chewies for his own consumption.) 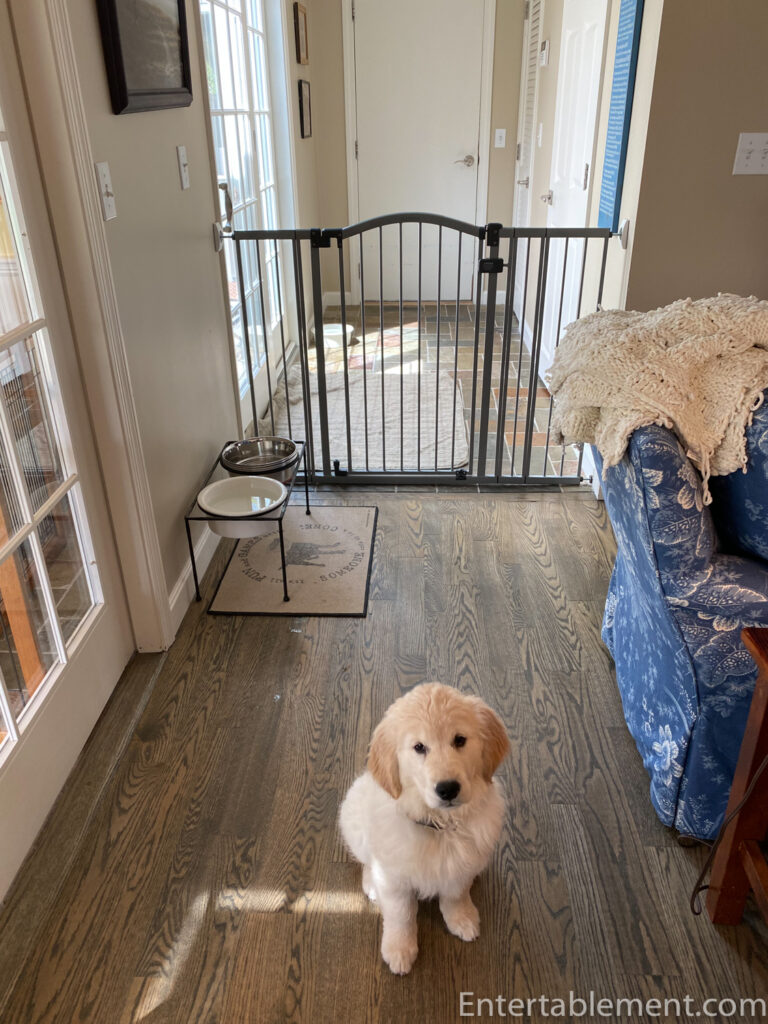 Have a lovely day. All!