Subtle Grey and Sunny Yellow for a Dull January Day 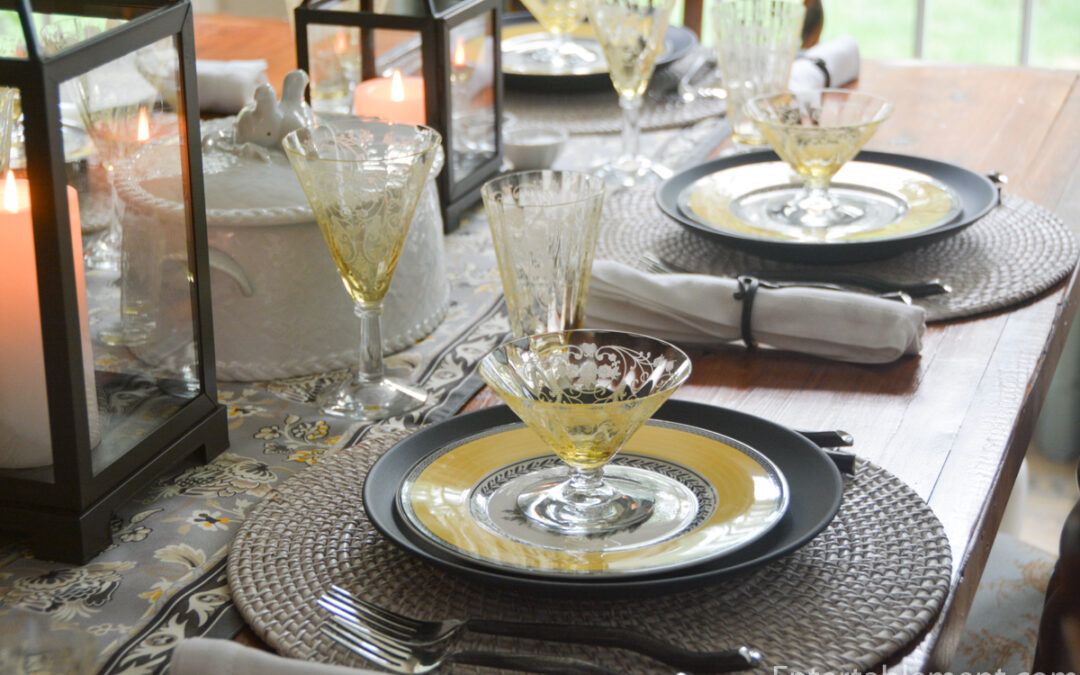 The jumping-off point for this table was a runner I picked up from Williams Sonoma at the end of the season a few years ago. Apparently, the matching napkins had been more popular than the runner because they were all gone, and the runner was in the “get it out of here at any price” section of the website. 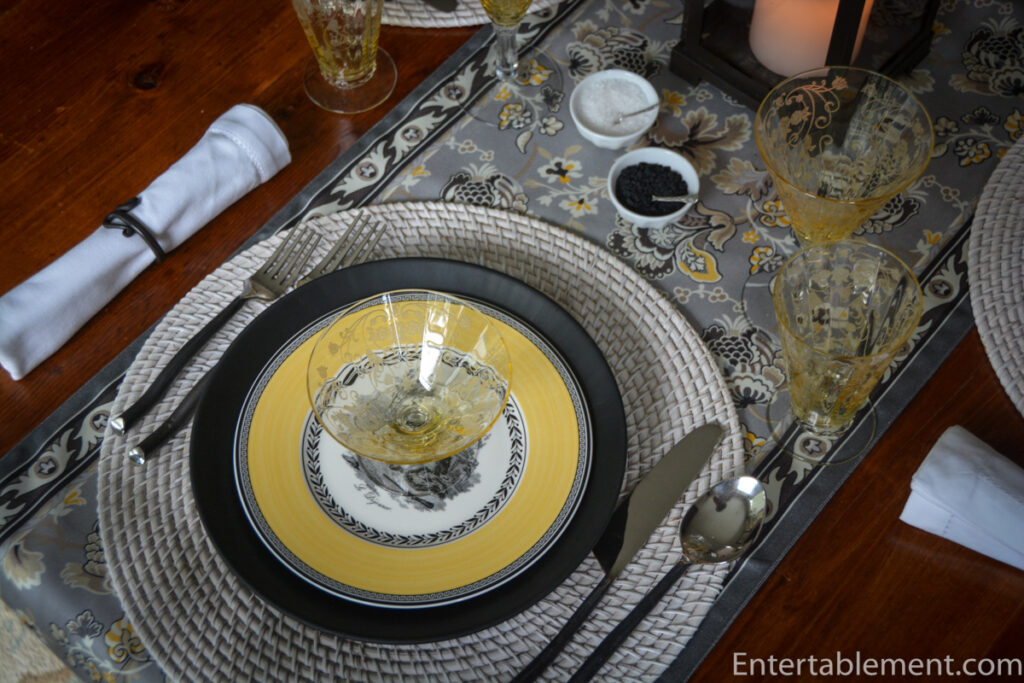 The unusual combination of grey and yellow appealed to me, but it was a while before the table combination began to coalesce. 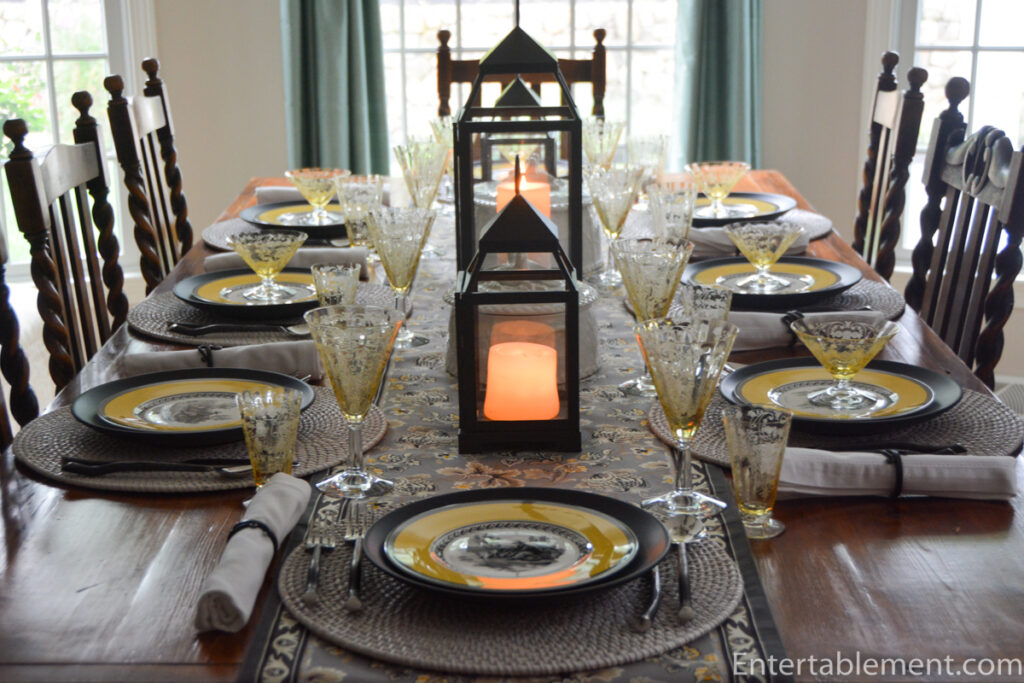 Matt black dinner plates have been in the collection for many years; they’re a great neutral and striking background for many combinations. For this table, the critical link was the Audun Chasse salad plates. 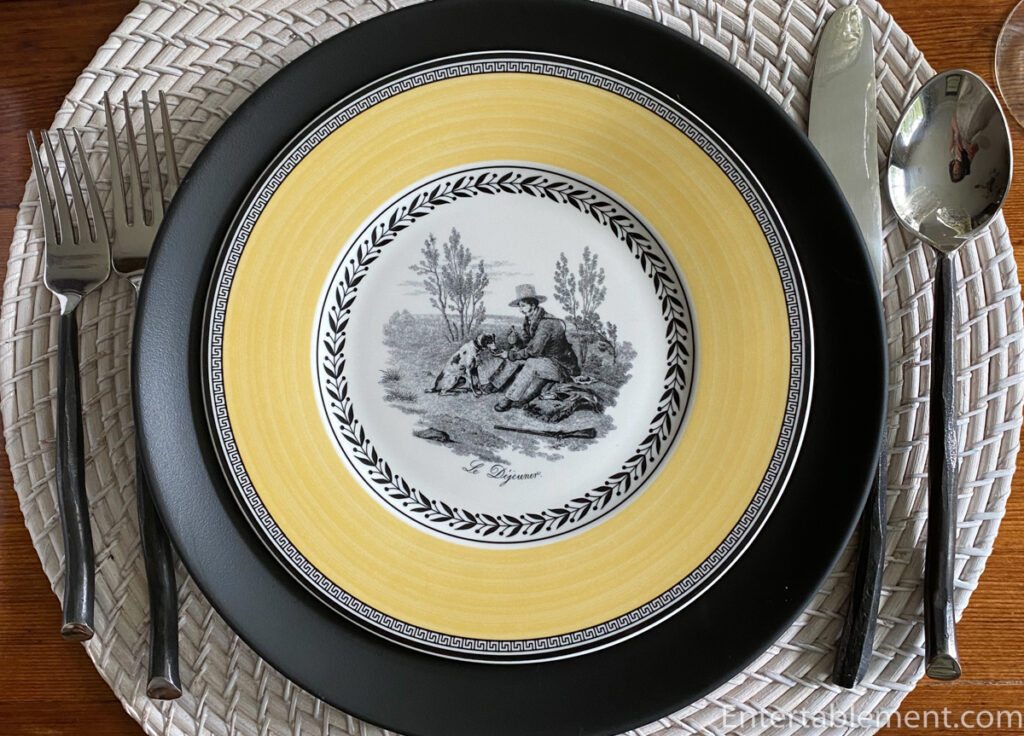 The Audun Ferme/Chasse china-pattern-rabbit-hole began with the teapot I discovered on eBay one day when looking for a set of mugs to go with The Royal Stafford‘s black and white plates. 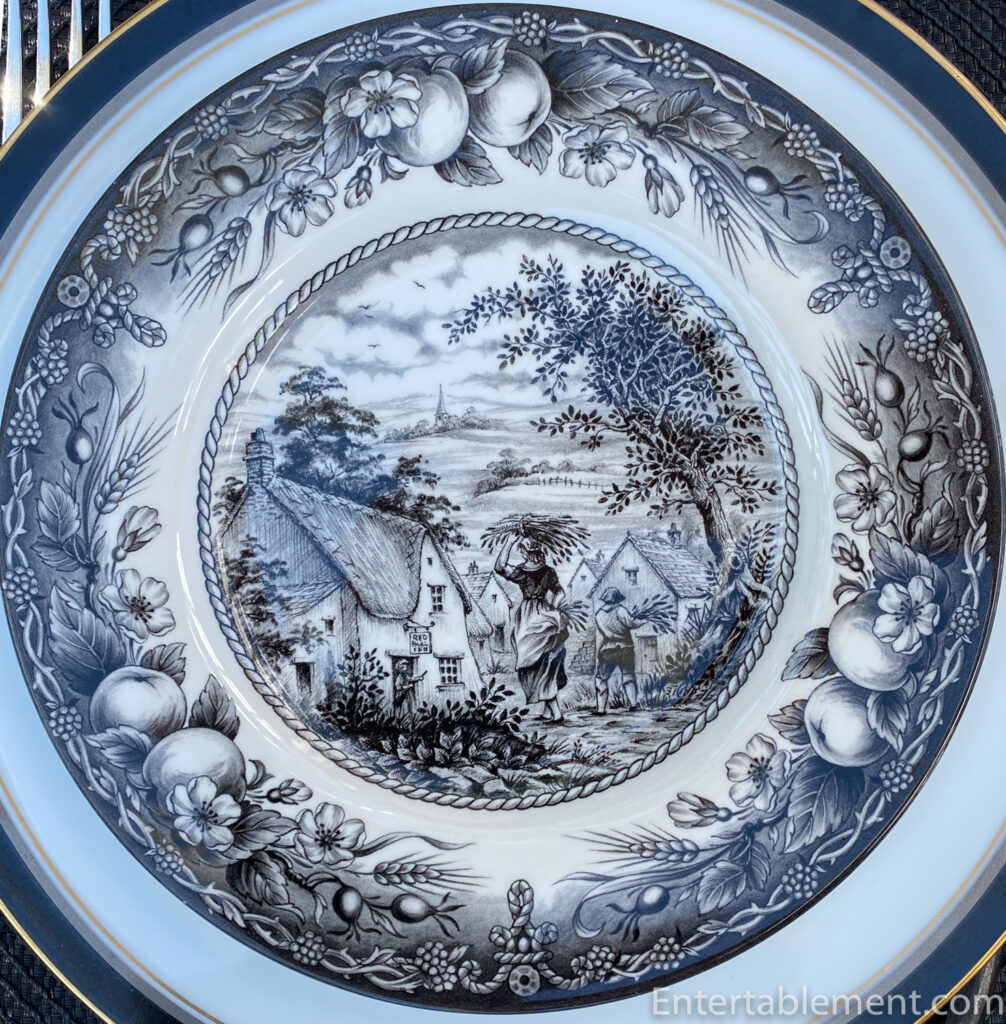 It was all so innocent! Don’t these mugs go beautifully with the Royal Stafford plates? The pastoral scenes, so beguilingly depicted in black transferware… 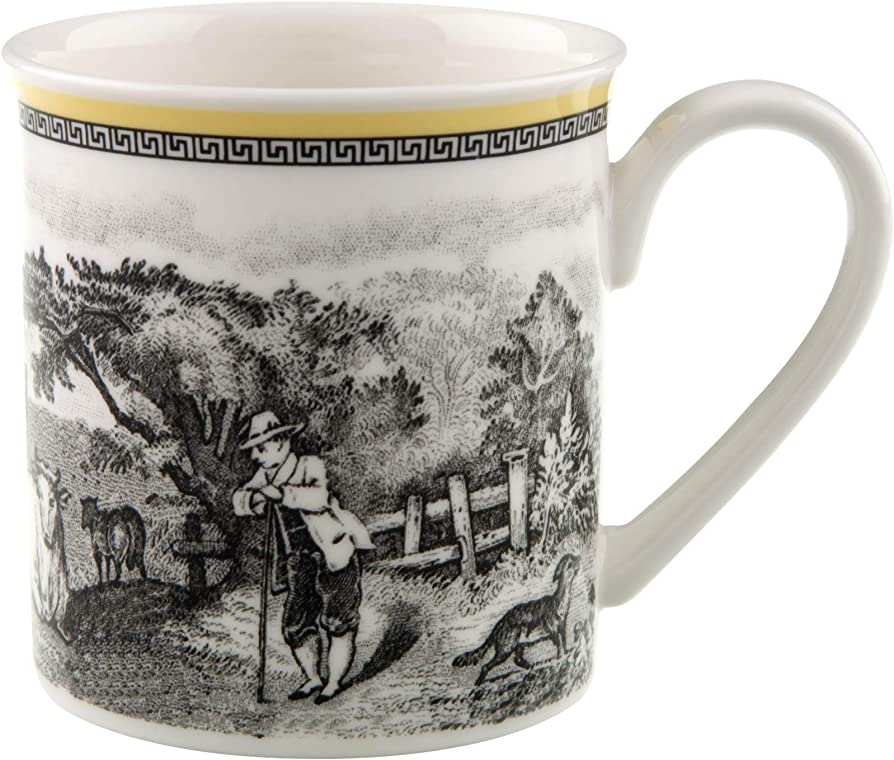 Could I help it that the teapot, cream and sugar were also available at enticingly reasonable prices? The shape of the teapot is particularly appealing, with its broad base and jaunty yellow finial. I do love a teapot with sturdy stature, eager to be transported anywhere its services might be desired. 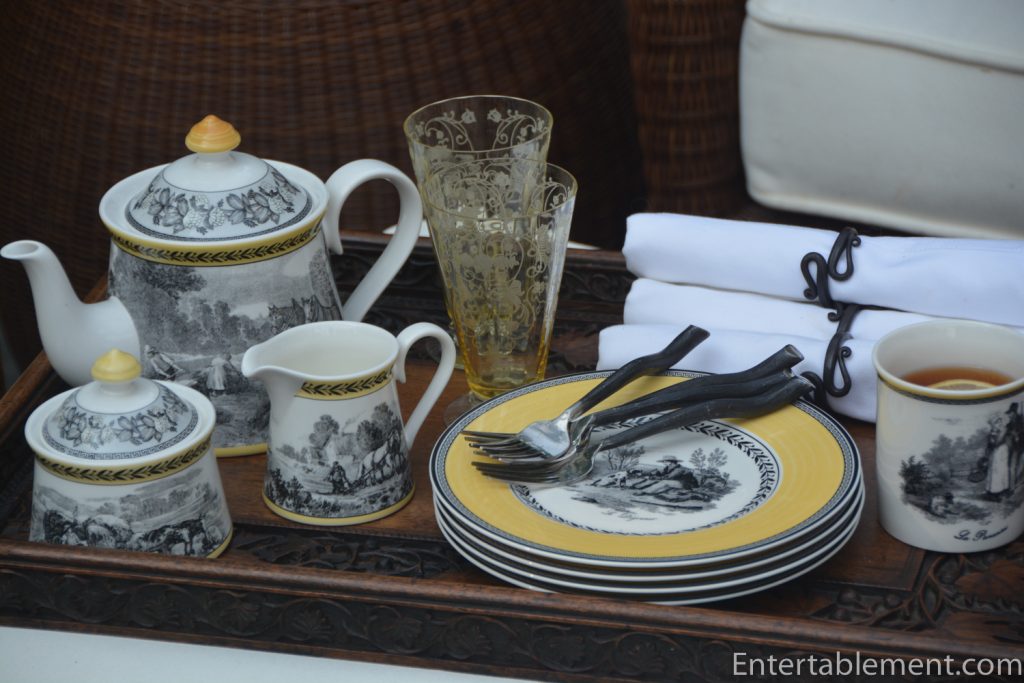 It was all so perfect for afternoon tea with Lemon Blueberry Bundt Cake, a tableware and culinary match made in heaven. 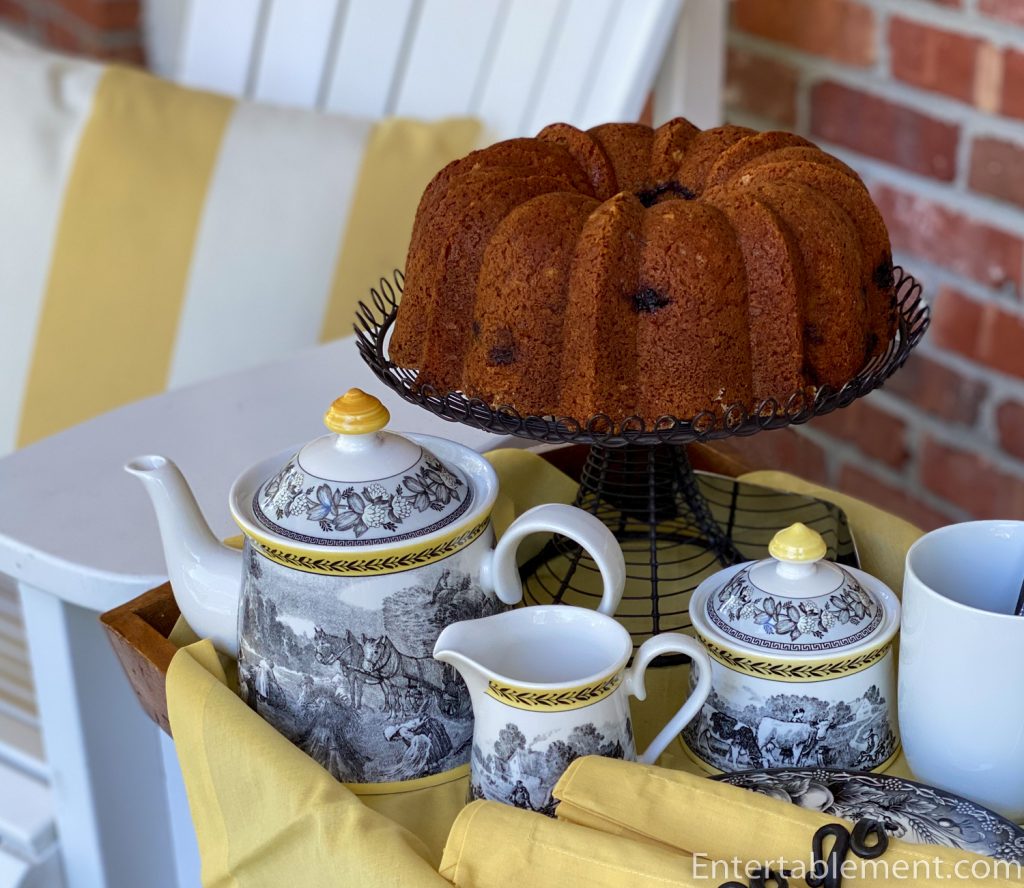 Ok, yes, I realize this does not explain how the yellow-banded Audun Chasse salad plates came into being. I already had black and white transferware salad plates. With two different scenes—gathering sheaves outside a thatched cottage 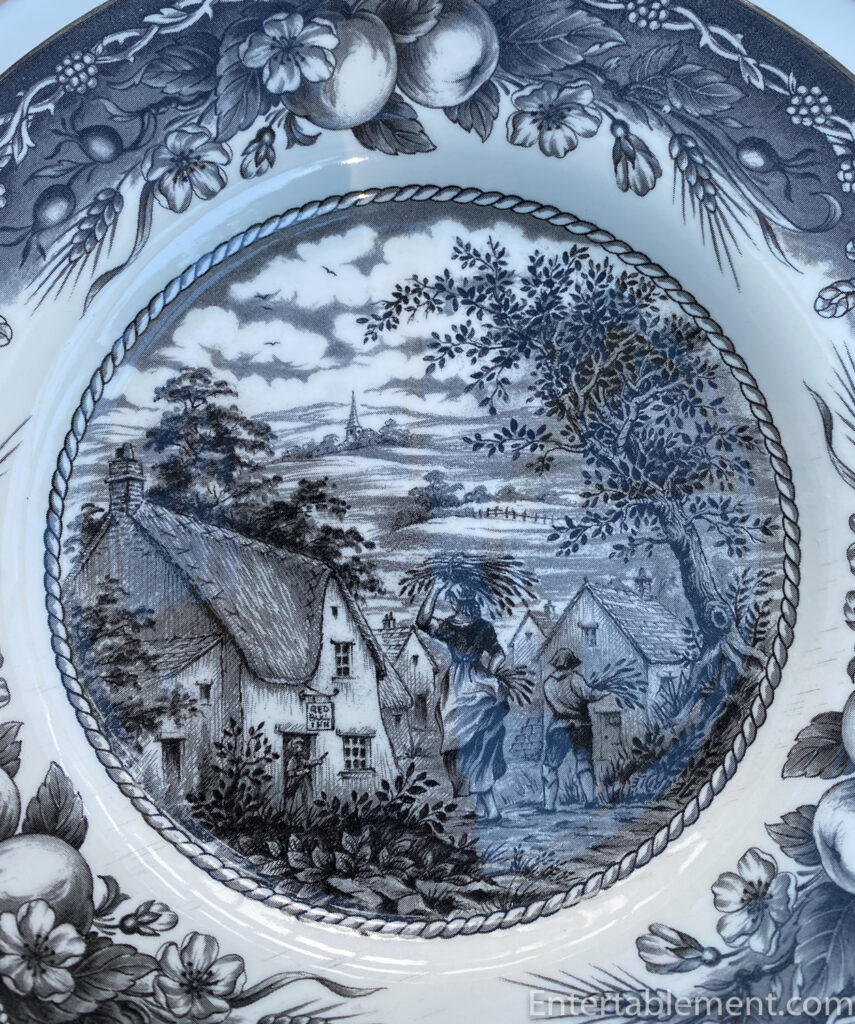 and a shepherd bringing home his flock. 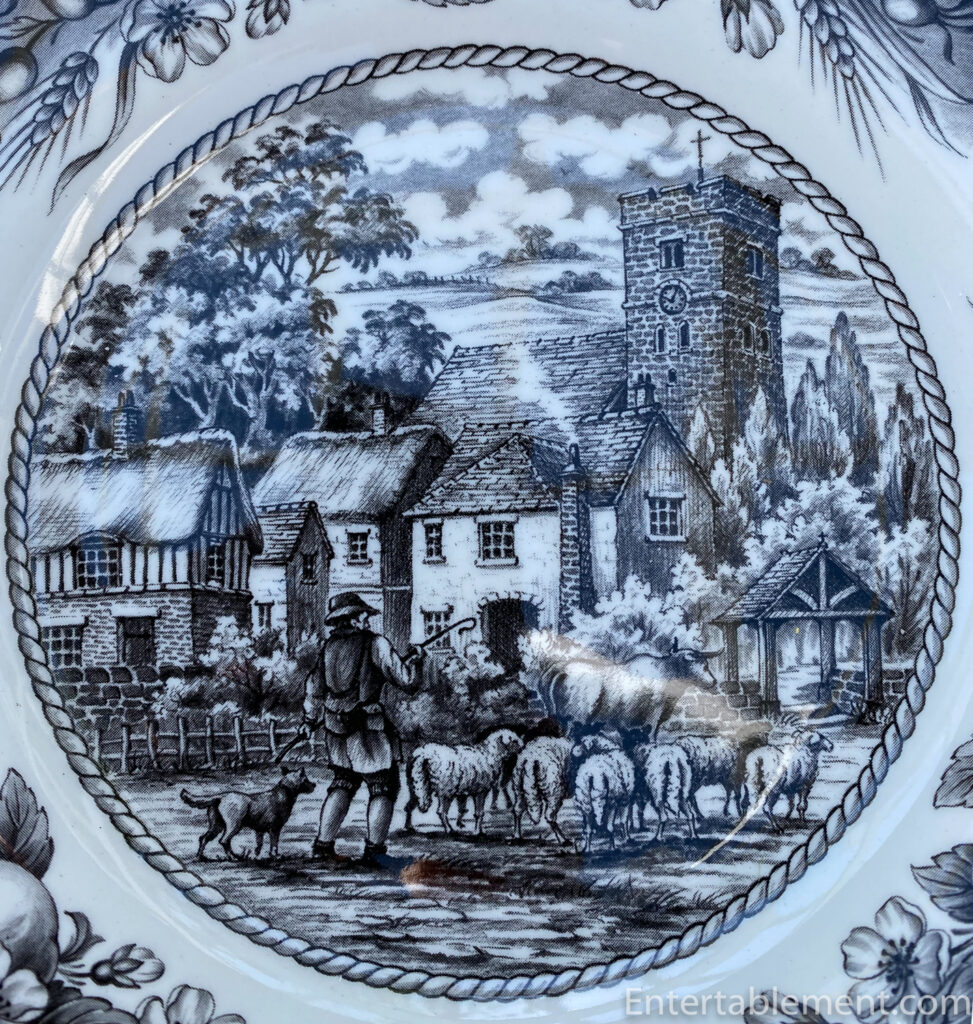 It was the dog. Sitting with his master, enjoying a picnic lunch together, “Le Dejeuner” is the etching title. I was powerless to resist. Besides, I adored the shade of yellow. Bold enough to be interesting without being shrill. So many yellows set one’s teeth on edge. 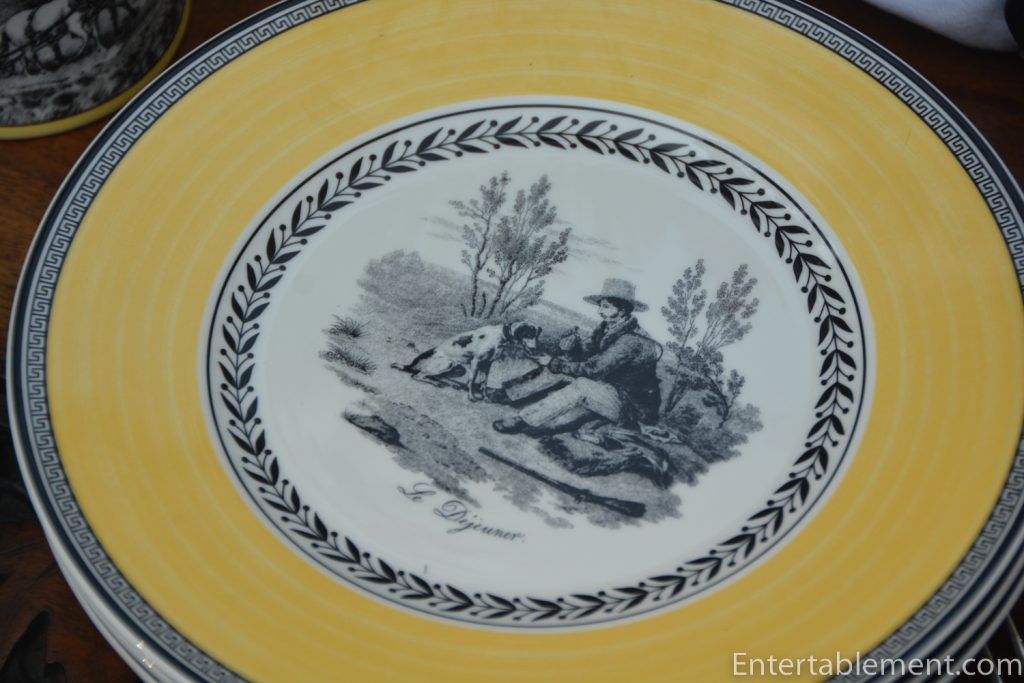 So beware, dear readers. Mugs can be a gateway china. One thing leads to another, and before you know it, you own a new teapot, creamer, sugar and plates, all because you were looking for something to match the plates you already have. So now that confession is out of the way, let’s get back to the table. I think it came together quite nicely, don’t you? 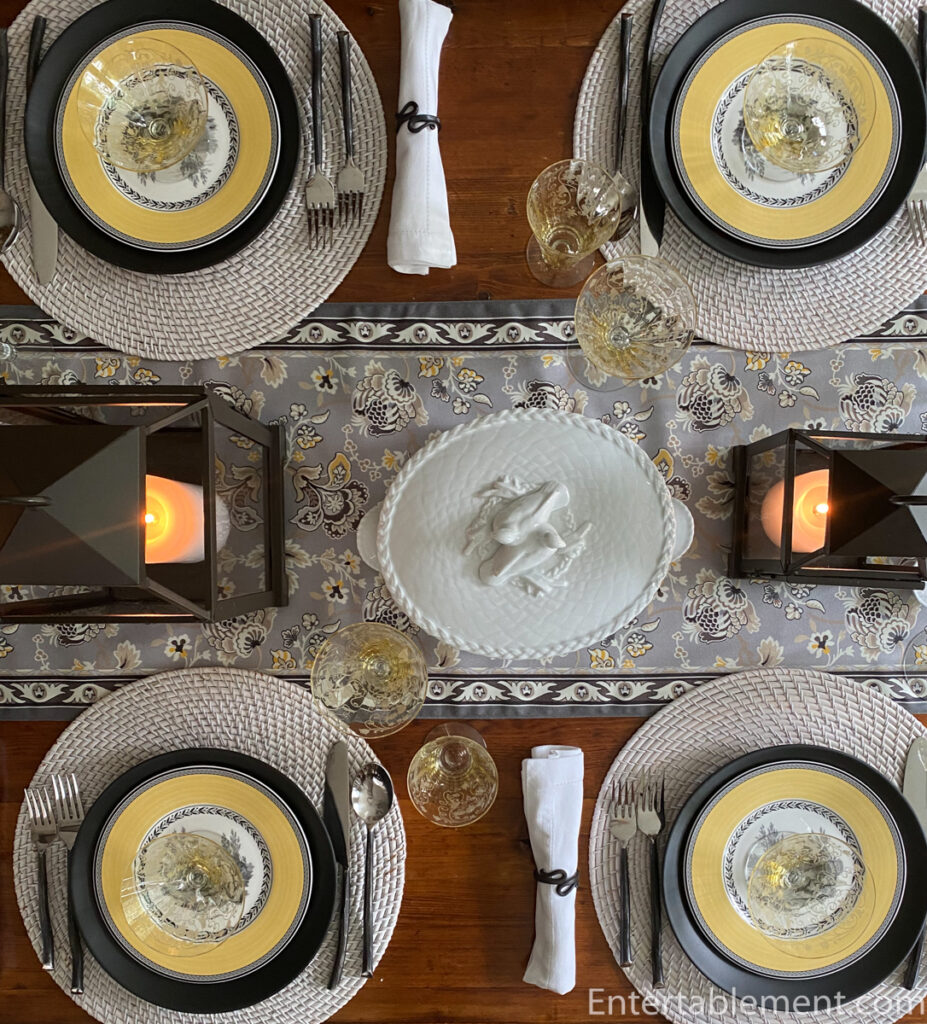 Fostoria’s Minuet Yellow Depression glasses are always happy to get another outing. 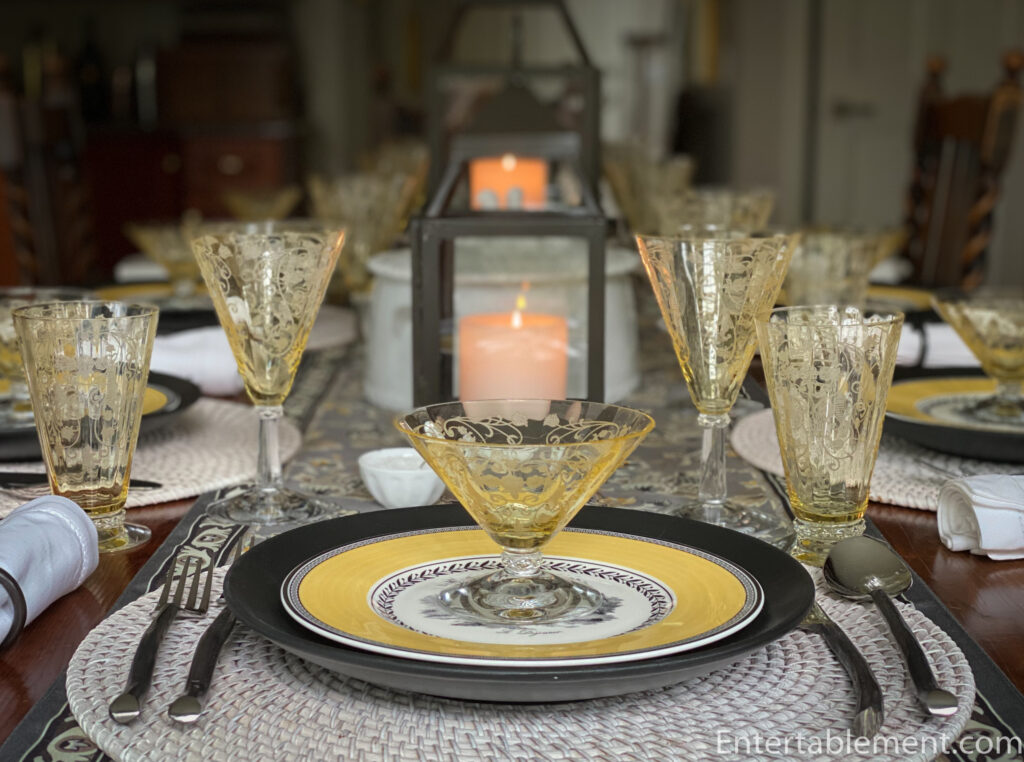 This pattern continues to grow on me, particularly the small, footed compotes. Perfectly sized for a helping of sherbet, crab salad or berries. 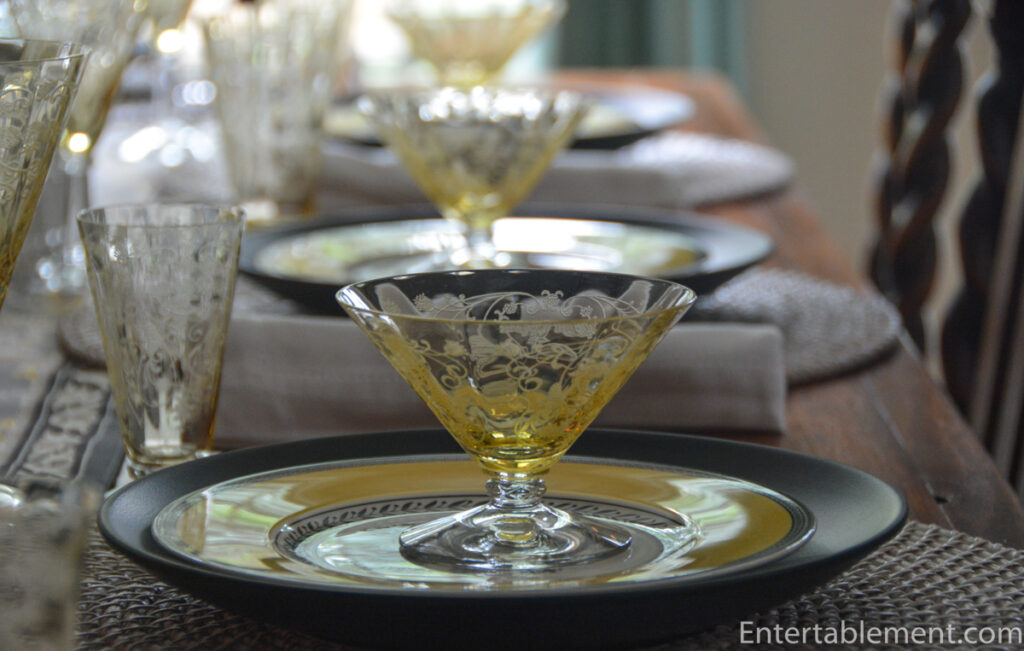 The vintage Royal Worcester Gourmet tureens come in two sizes. Below is the larger, oval one. I thought the bird finials fit right in with the outdoor hunting theme of the salad plate. 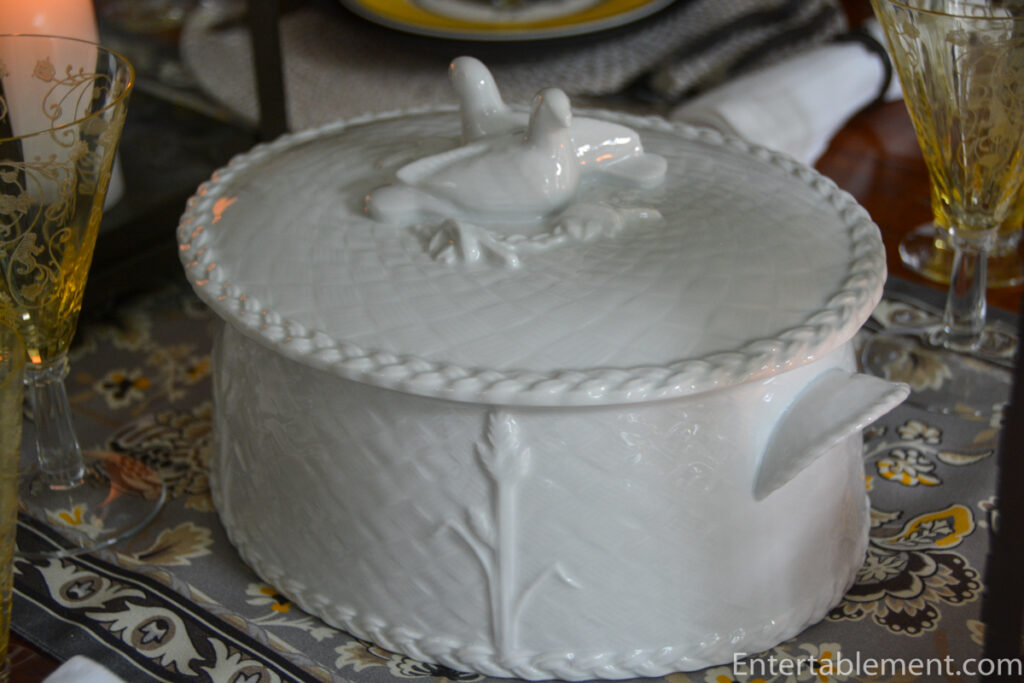 Simple white open salts tied in with the white porcelain of the tureen. 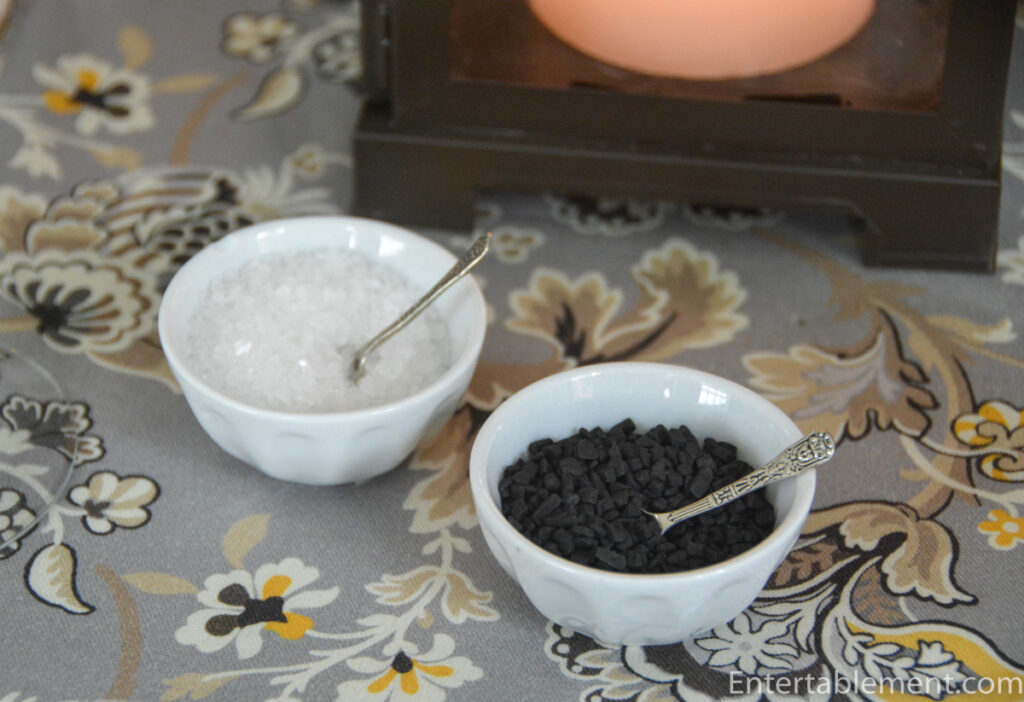 The metal lanterns echoed the dull black as the dinner plates. 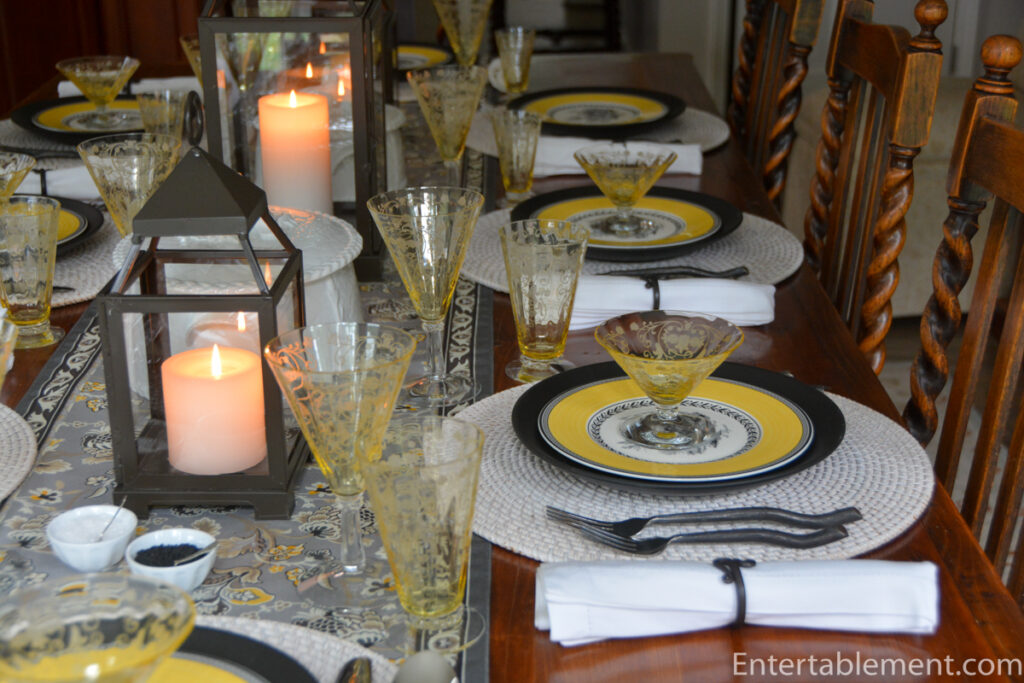 The same shade extended to the Twig cutlery and napkin rings by World Market. 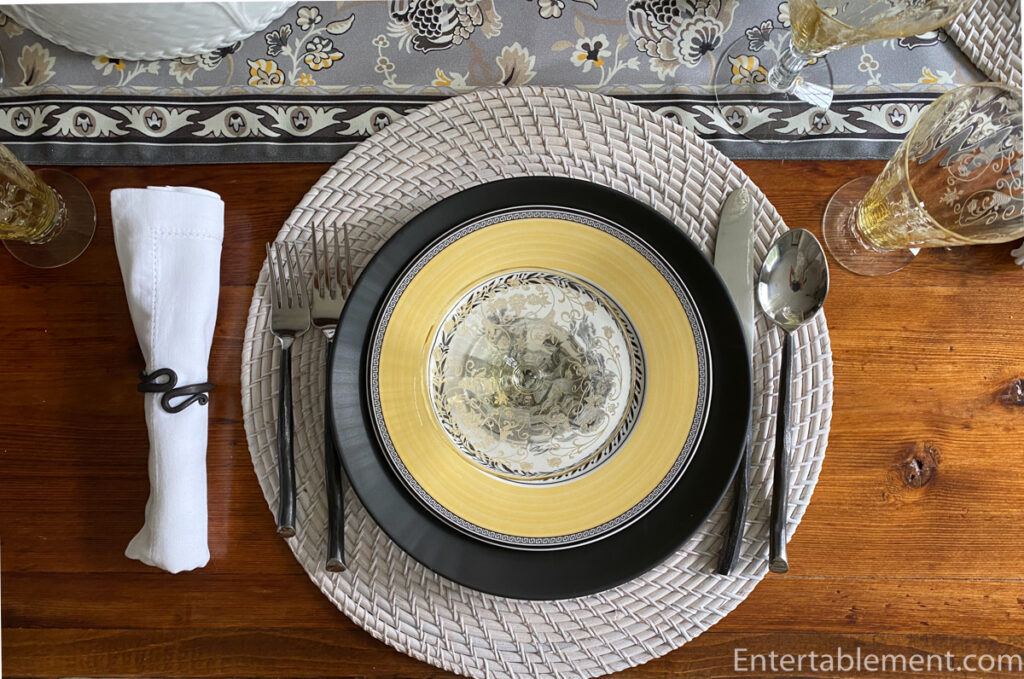 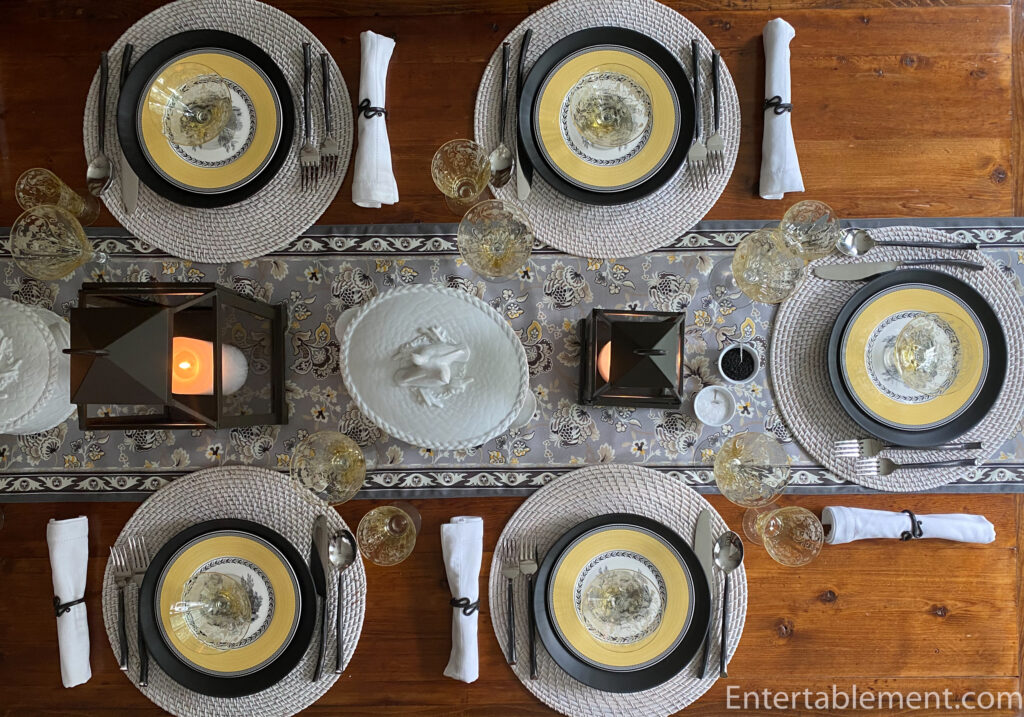 A cheerful table for a dull January day. 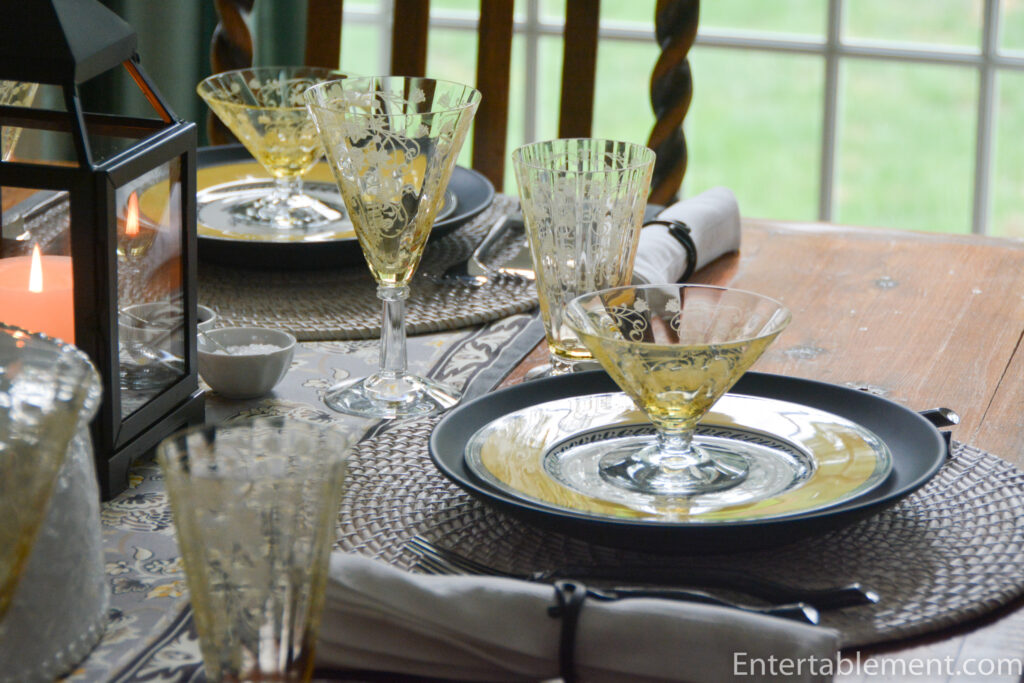 We can all take heart; we are a whole month past the shortest day; the Dead of Winter is also in the rearview mirror,  which means there is more winter behind us than in front of us. Alleluia!

I’m busily employed with my Cathedral Project, researching, sorting pictures, and figuring out timelines— utterly absorbed in pulling together a cohesive story. The scale of human effort, the startling engineering feats along the twists and turns of public opinion and opprobrium are gripping. It’s incredibly comforting to realize that no matter how unsettled things look in the present day, current travails are nothing like the degree of upheaval that has gone on in the past. Twitter spats pale compared to treason charges, confessions extracted by torture and resultant beheading, drawing and quartering that were commonplace. It makes me chuckle when people assert that the world is becoming more violent. More to come on that front!

Have a lovely weekend, all.