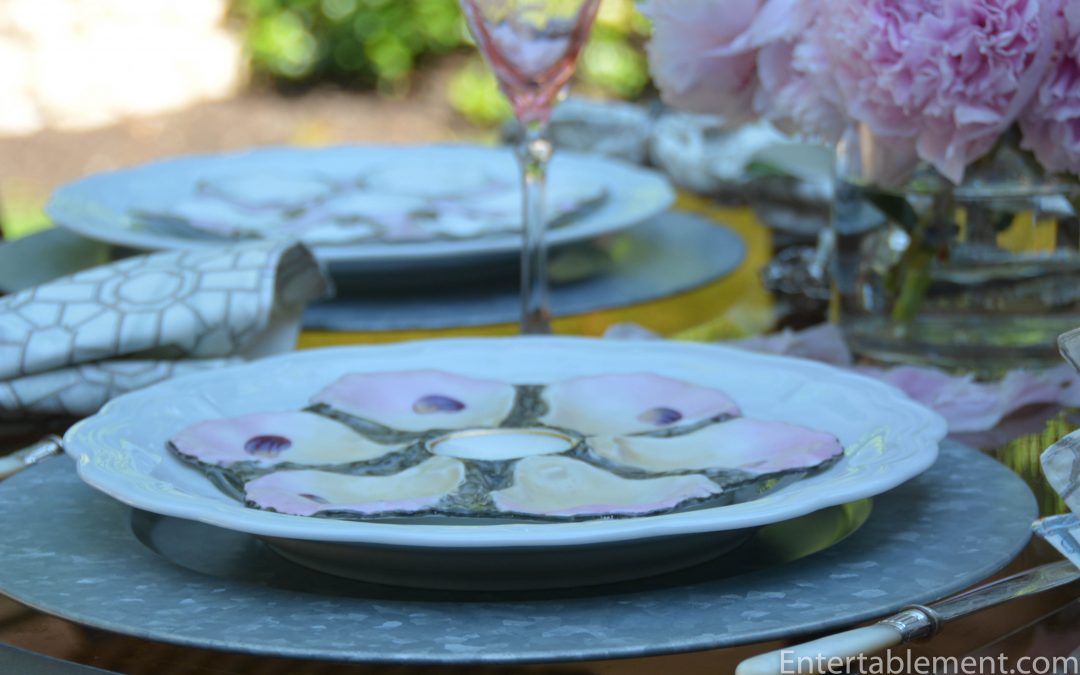 Majolica Oyster plates are one of those love ’em or hate ’em tableware items. 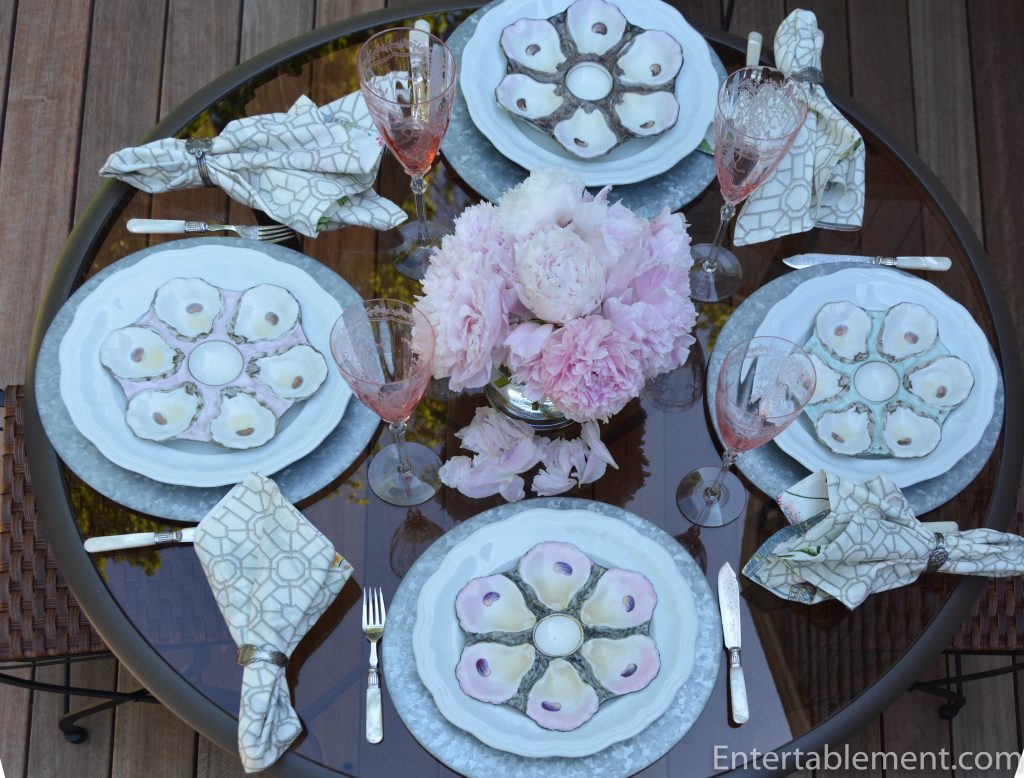 The typical design incorporates six wells for the oysters and some of them have an additional little round well in the centre, originally for crackers, but we tend to use it for freshly grated horseradish. 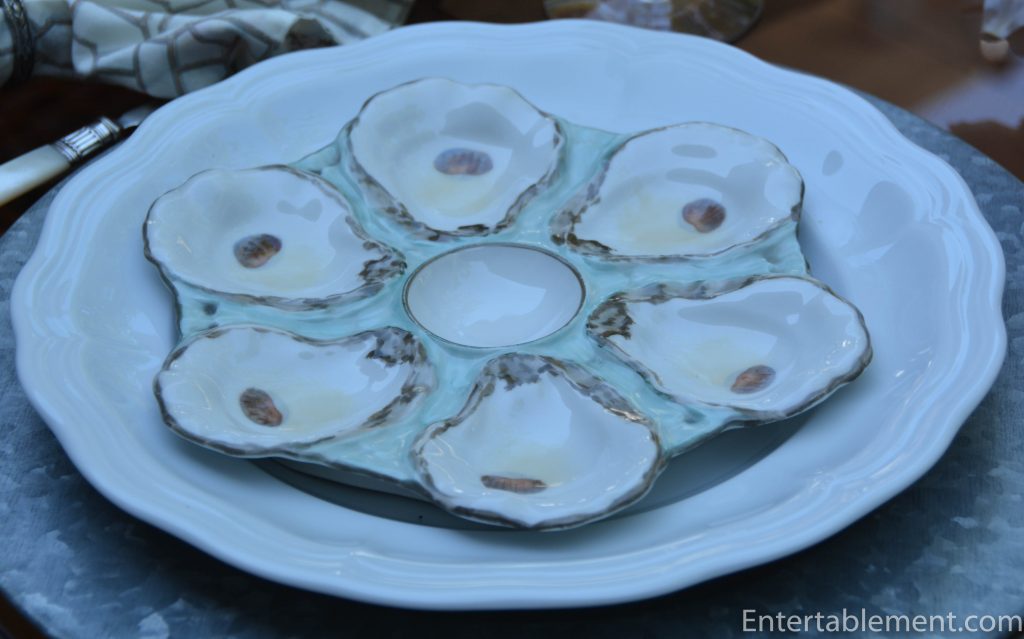 I’ve been collecting them one at a time for a number of years, and was lucky enough to find more shortly after we acquired the Cape house, almost nine years ago. 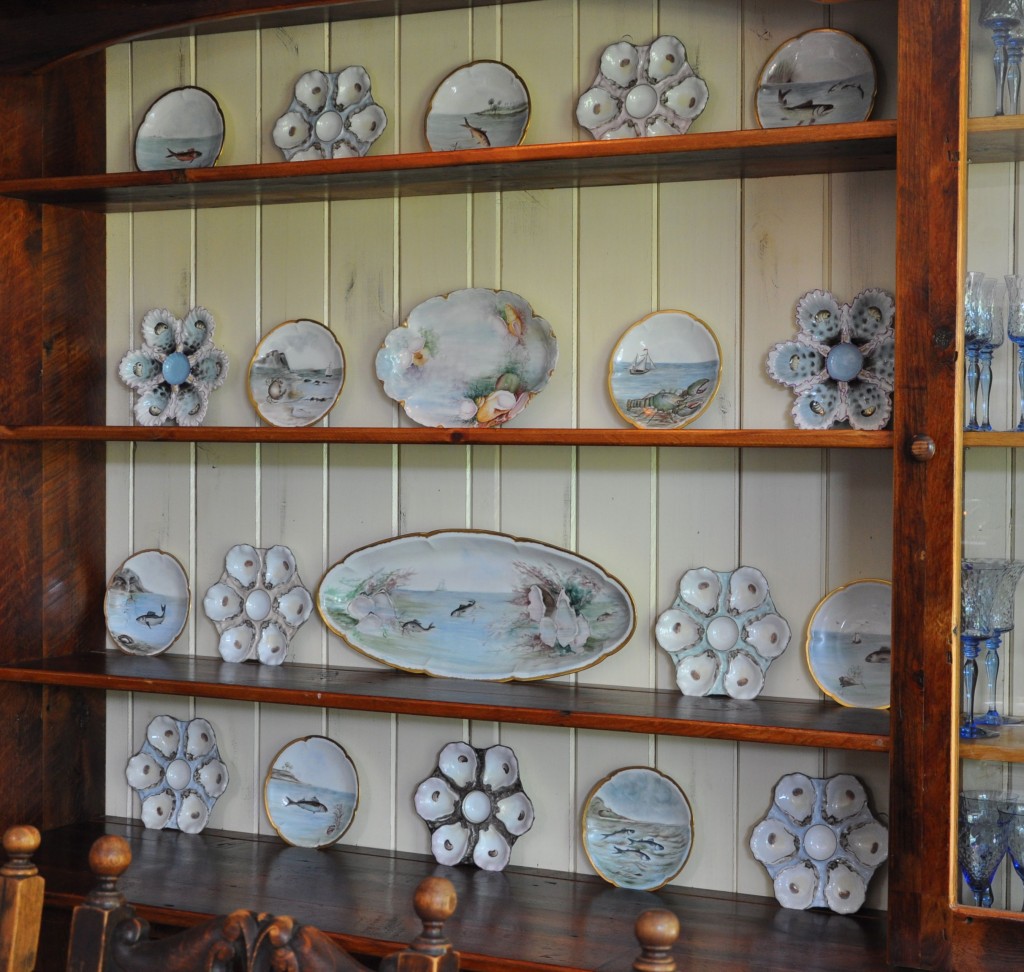 I often display them in the hutch in our dining room, as you can see in this picture from Gien Oiseau Bleu. 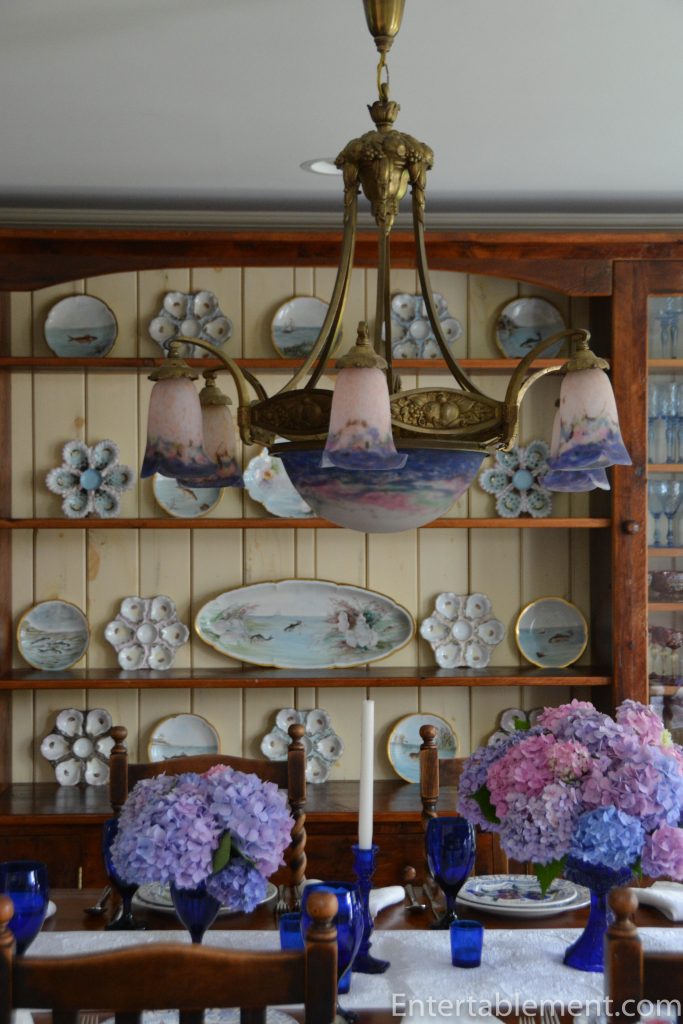 Most of them have soft pastel shades of blue, turquoise and pink in the ridges between the oyster wells; one or two have coffee coloured glaze, too. 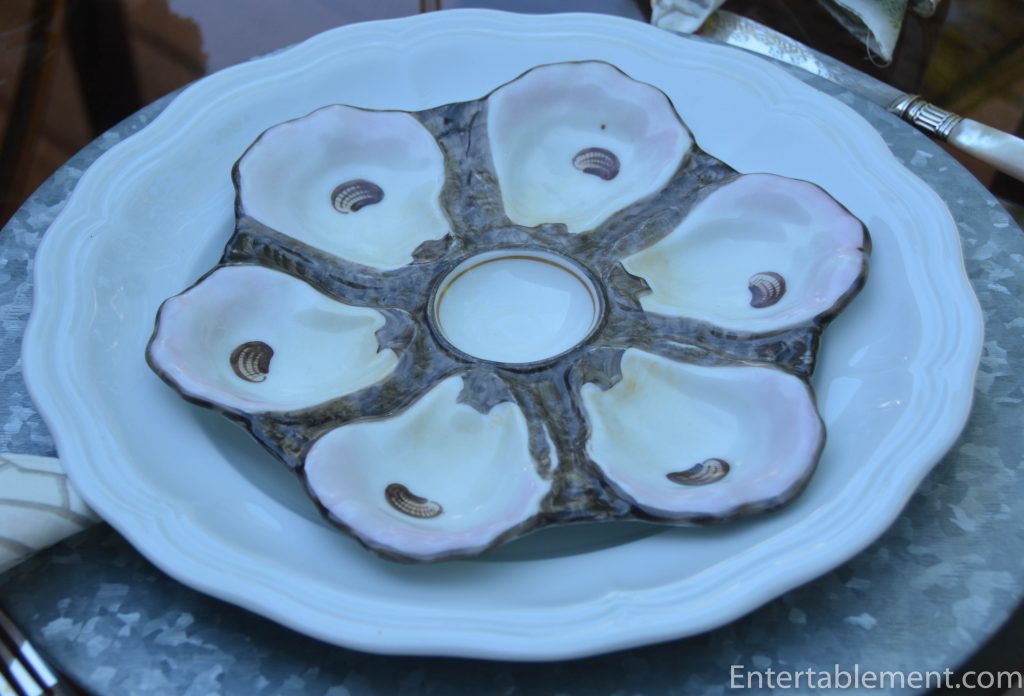 Oysters were not always the delicacy they are now considered to be. According to the Majolica International Society “Oysters have been consumed in Britain since Roman times. By the early 19th century, industrialized harvesting of oysters increased their availability such that over 124 million oysters were sold annually in London alone. Oysters were frequently used as a filler in other meat pies and pickled oysters became one of the staples of the diet of the poor. As Dickens’ Sam Weller remarks in The Pickwick Papers, “Poverty and oysters always seem to go together.”  Times have changed, indeed! 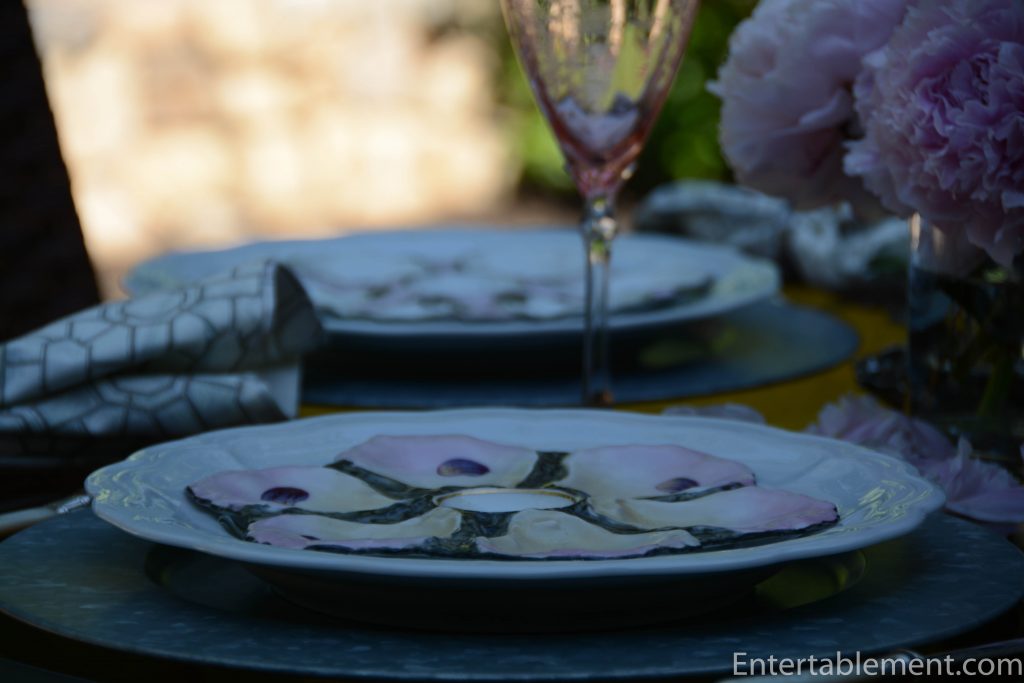 My husband Glenn always jokes about what was going through the mind of the first person to try an oyster. Likely “yuck“… 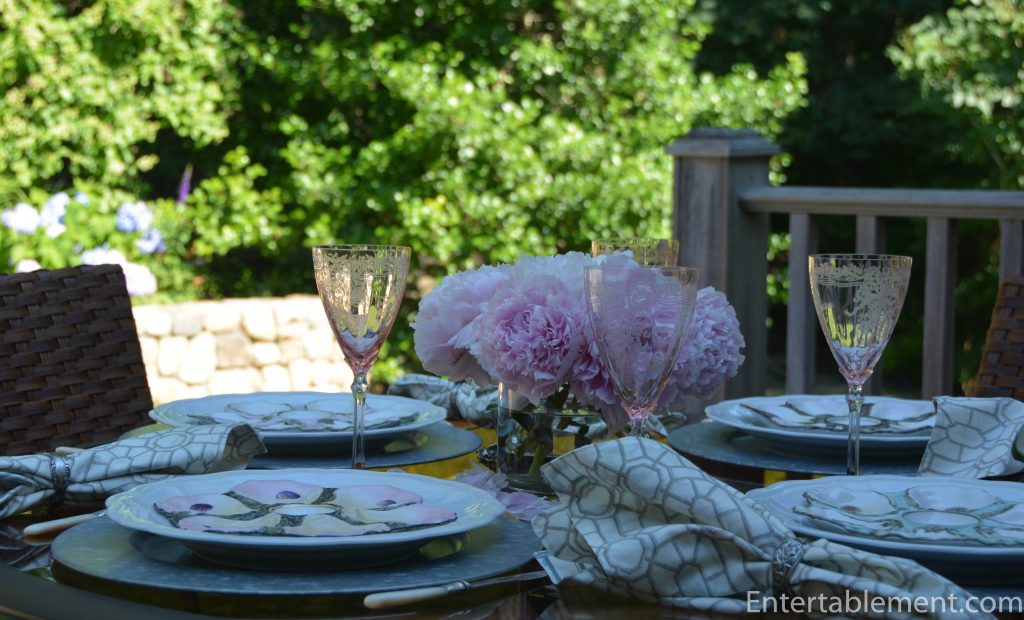 The peonies were blooming, and the soft pink shades of Sarah Bernhard called to mind the similar tones of the oyster plates, and the delicate hue of the Fostoria’s June Pink Depression Glass. 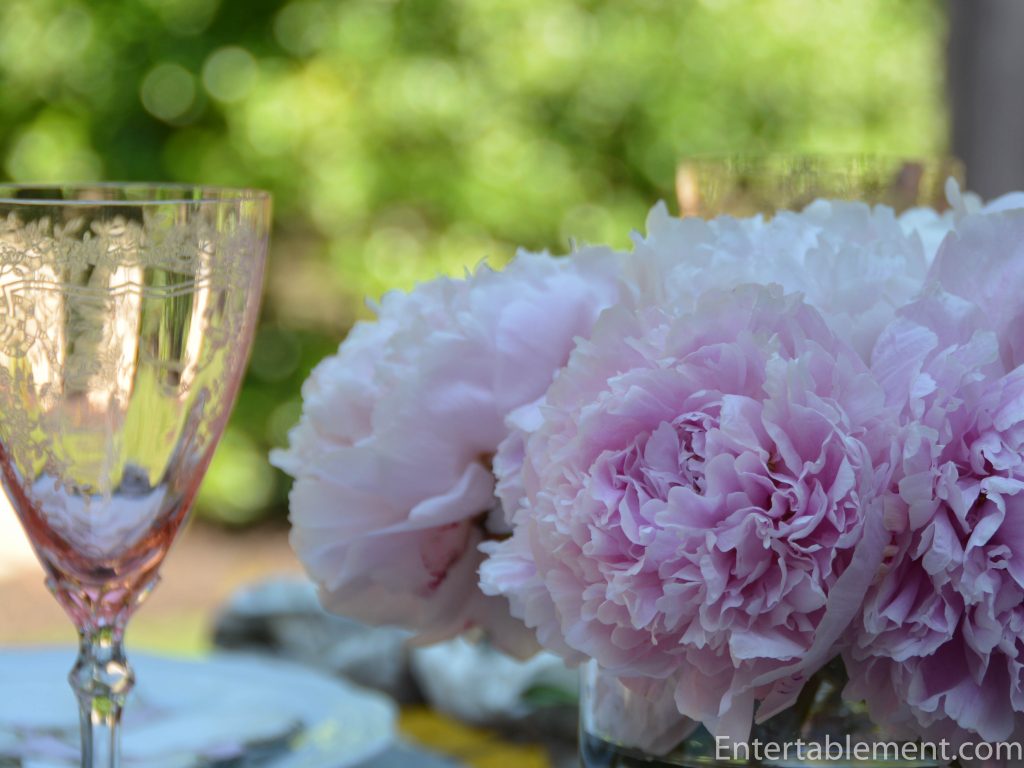 Of course, the pewter oyster shaped open salts joined in. I got these years ago, complete with the little spoons. You can just see a pearl tucked into the narrow neck of the cellar on the front. It’s an enchanting little detail. 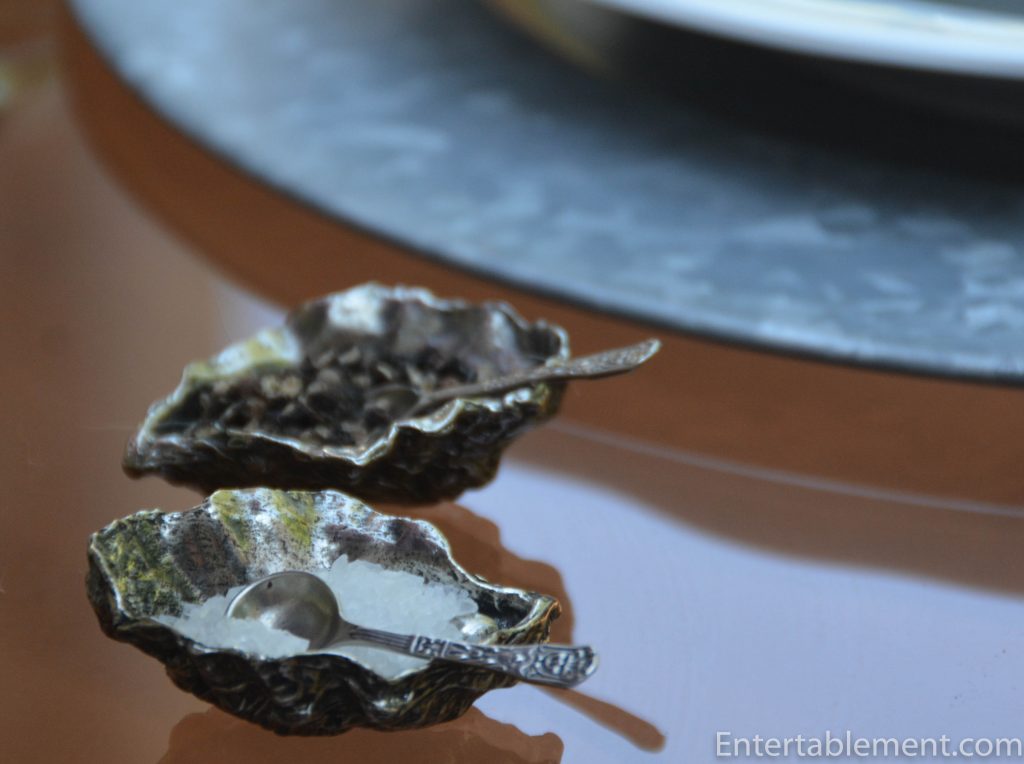 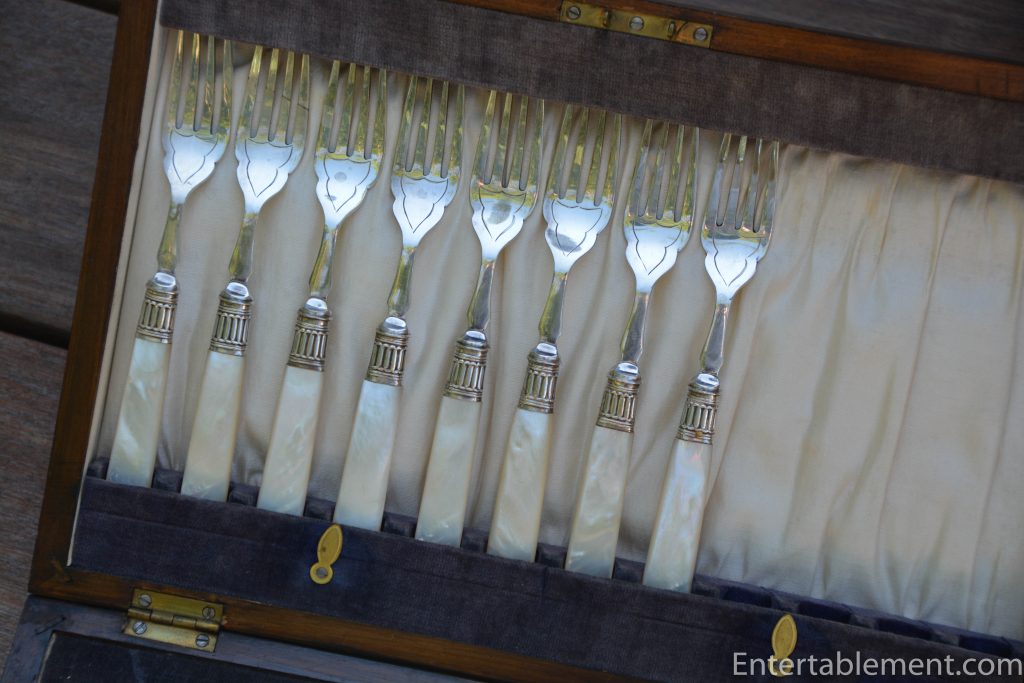 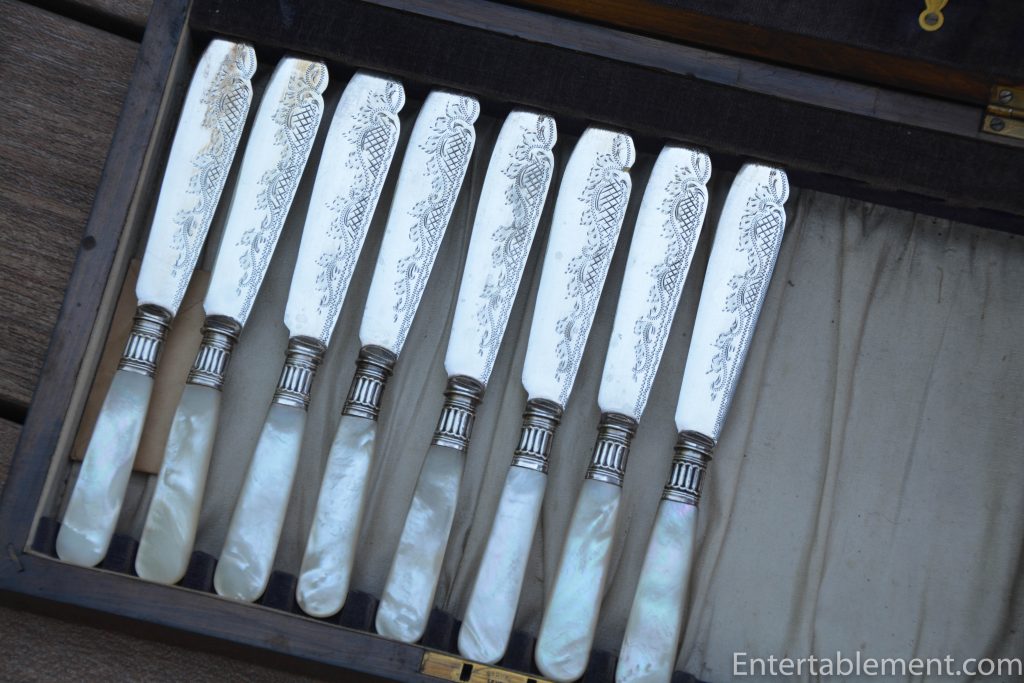 They had a day out from their fitted and lined case. 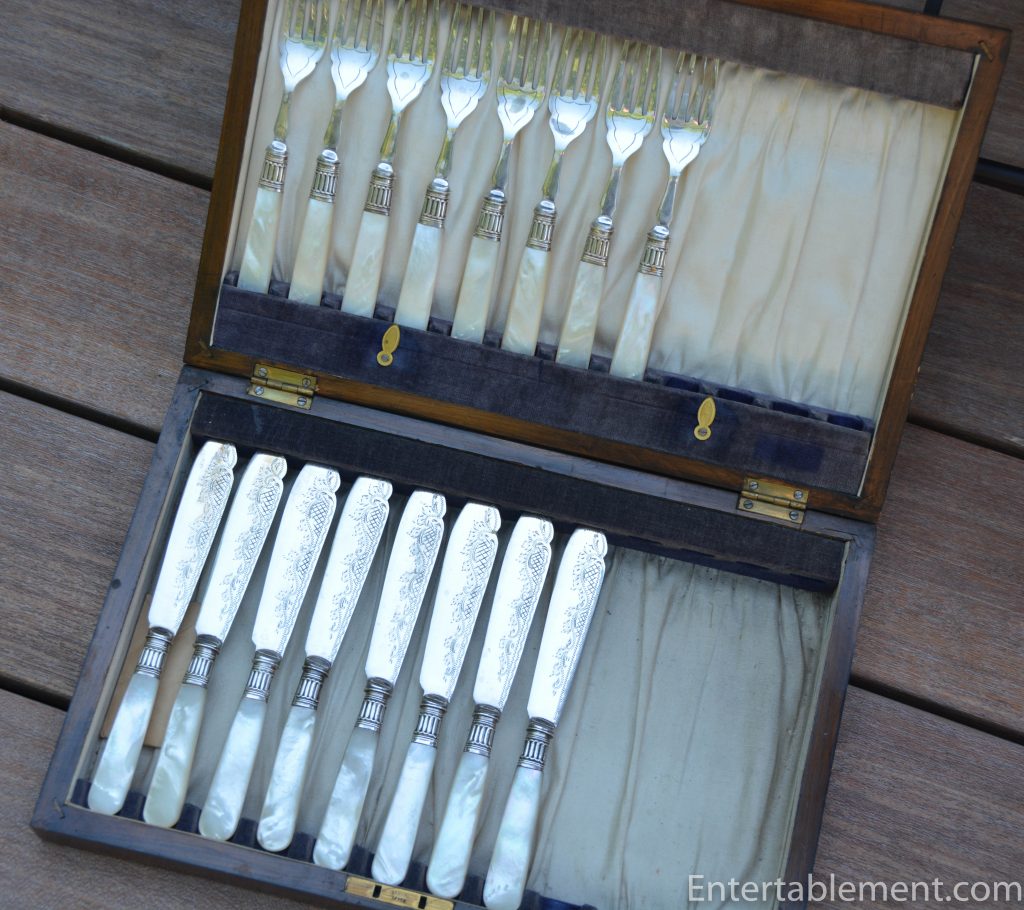 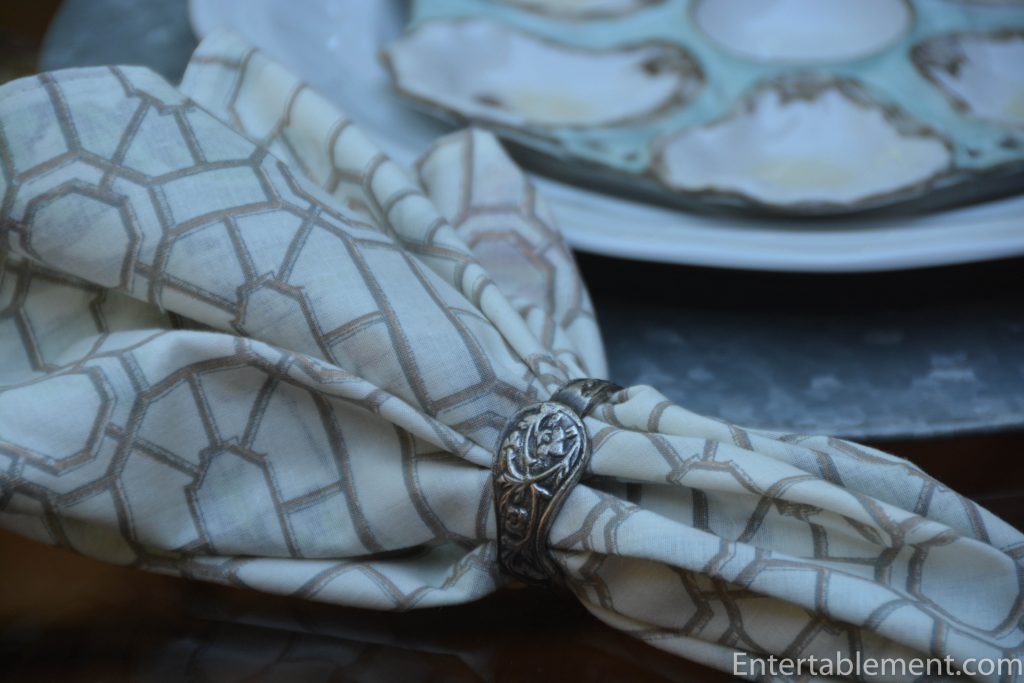 I got these a few years ago from Wayfair. The reverse side shows brightly coloured flowers and a pagoda, and I used them in the Wedgwood Shell-Edged Cream on Cream post. This year’s rendition, called Marilyn, features a blue floral reverse side.. 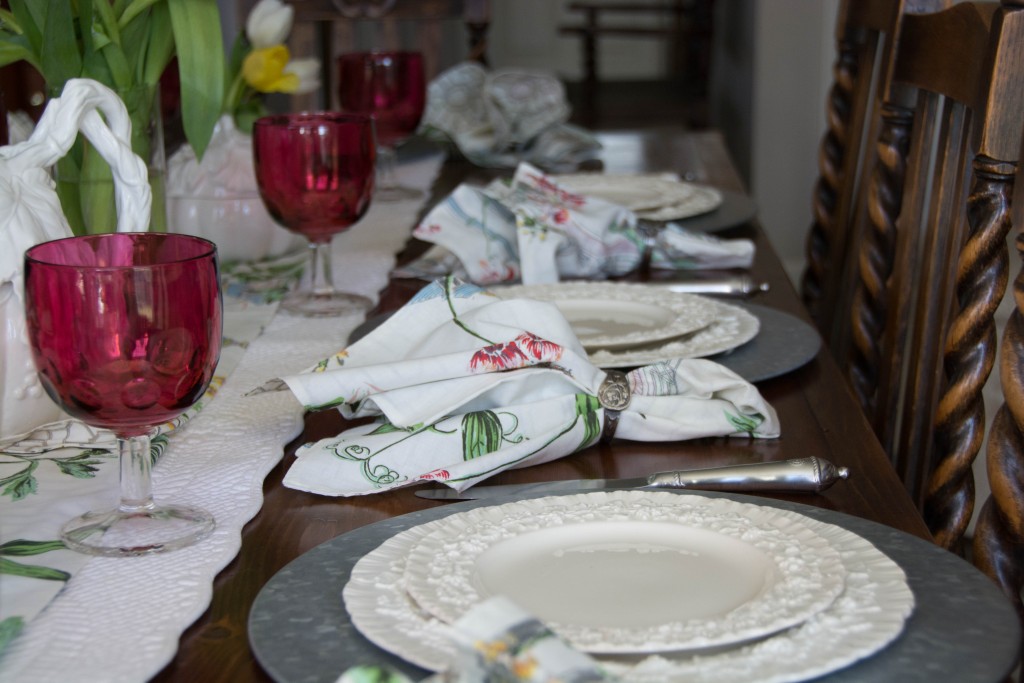 Sarah Bernhardt peonies call to mind my mother’s admonition when we were being overly dramatic as children. She would compare us very unfavourably with the famous actress from the turn of the last century and say “Stop being a Sarah Bernhardt“.  Despite that, I love these particular peonies; such a marvellous scent and soft ballet pink petals. 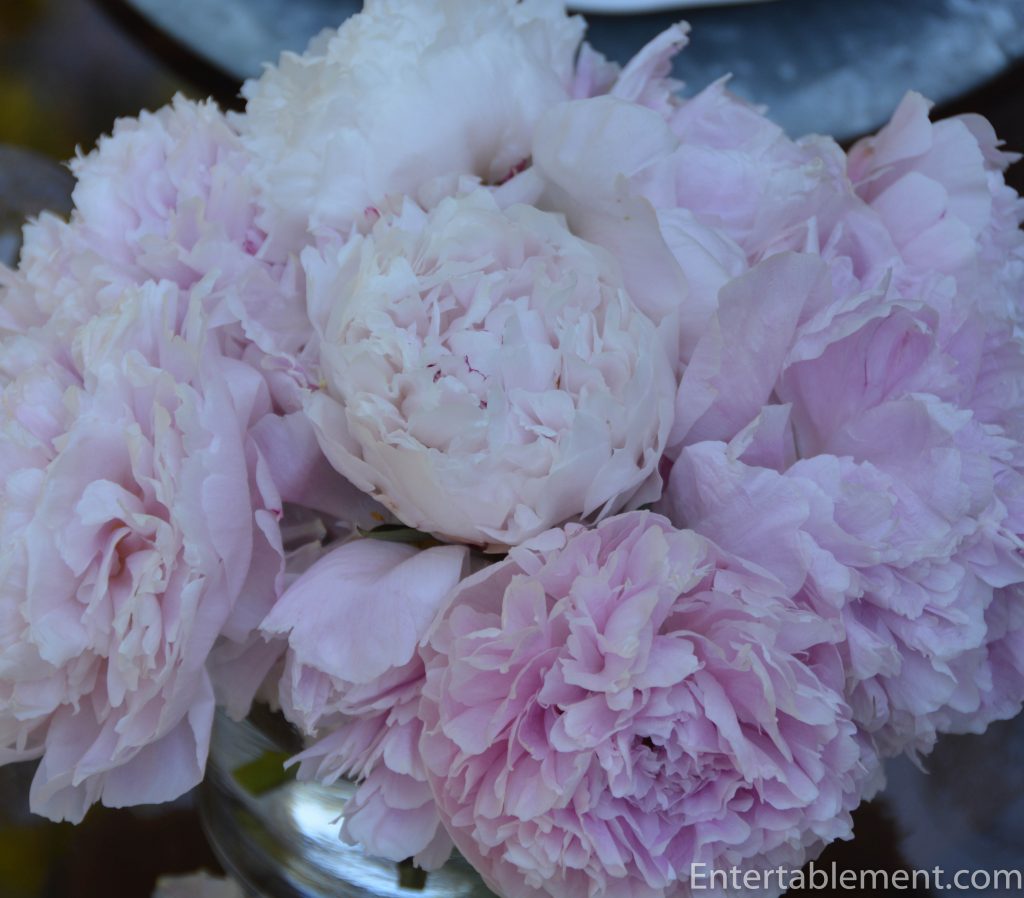 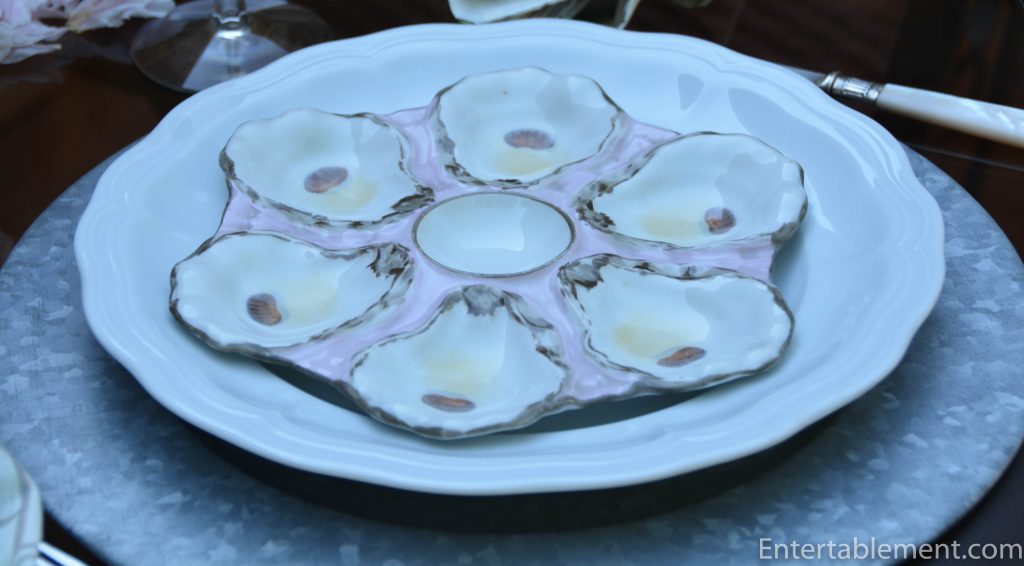 Enjoy the peonies while they last! The season is so short, and they’re such spectacular players in the floral scene. Their delicate appearance belies their tough-as-nails constitution, though they do not like being moved. Once settled in their surroundings, they’ll provide decades of blooming pleasure, but woe betide the gardener who keeps shifting them from place to place. The peonies will sulk and refuse to bloom at all. 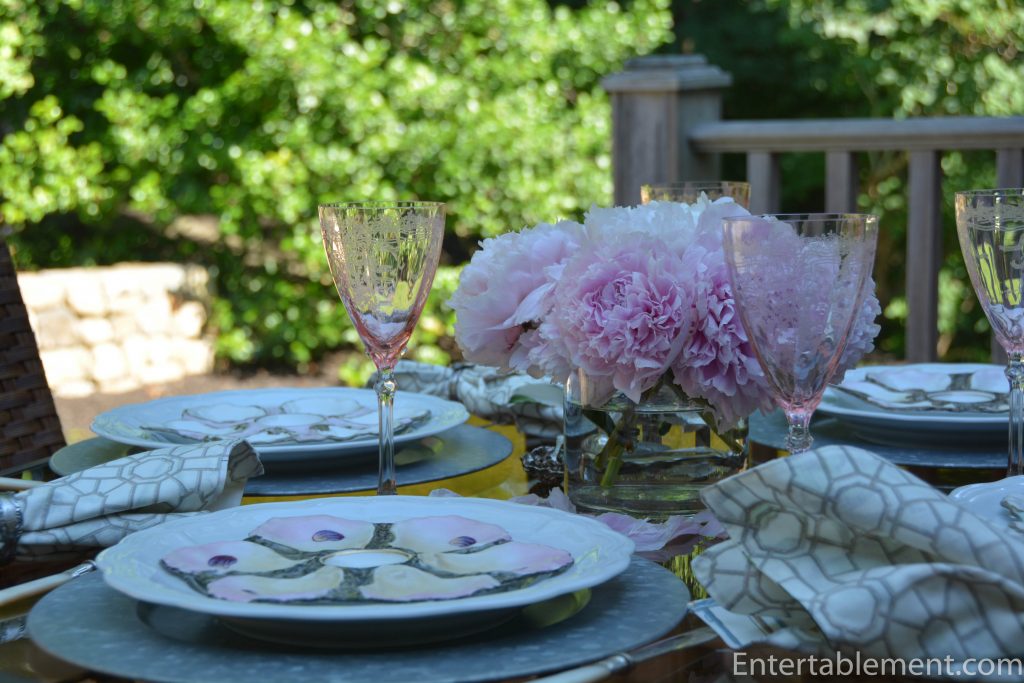