You’re in Clover with Victoria & Albert 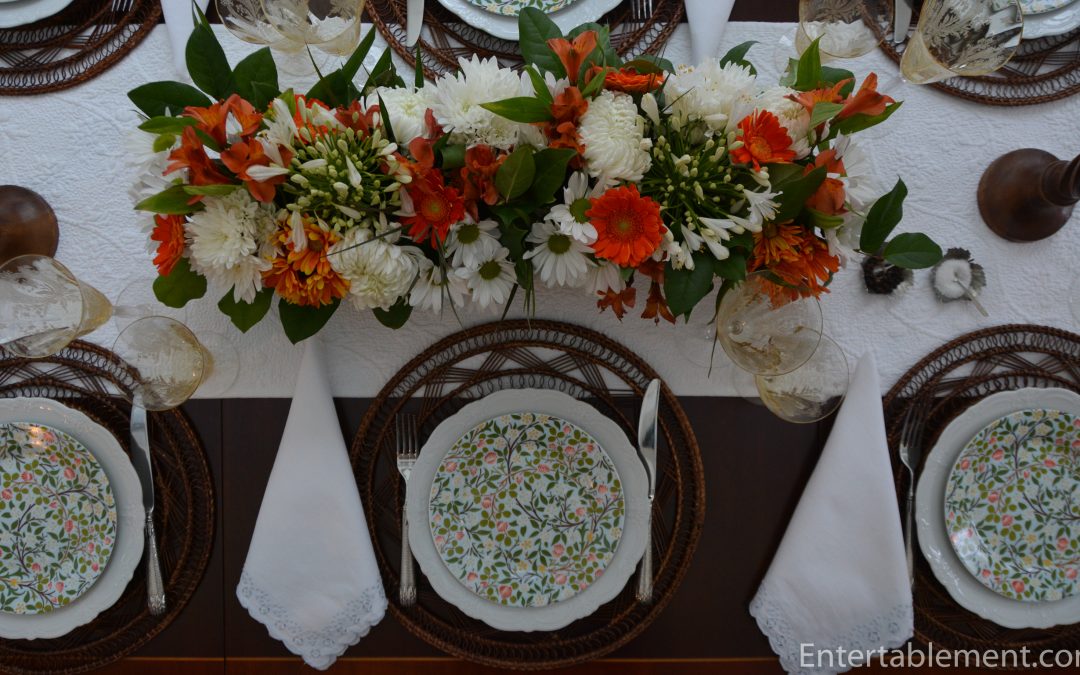 January is making a gracious exit here in the Great Canadian North, and I for one am very thankful. Only one more month of winter to go (she says, somewhat defiantly). Yup – spring begins on March 1, according to the widely accepted meteorological definition of seasons. 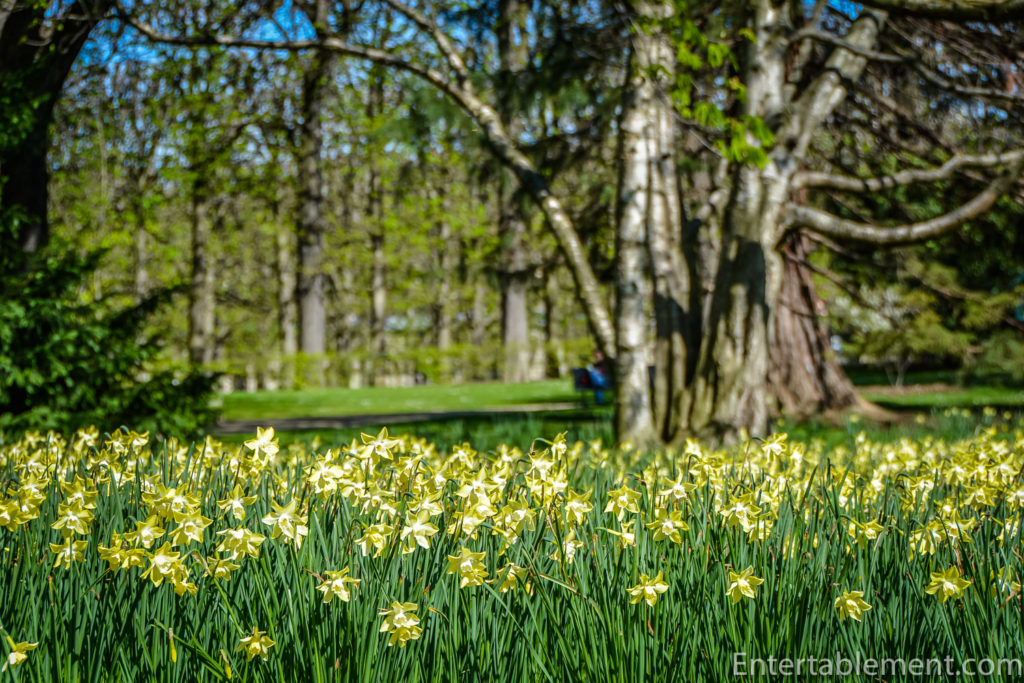 Most of us are familiar with the astronomical definition, which uses the dates of equinoxes and solstices to mark the beginning and end of the seasons:

But let’s not use that definition. 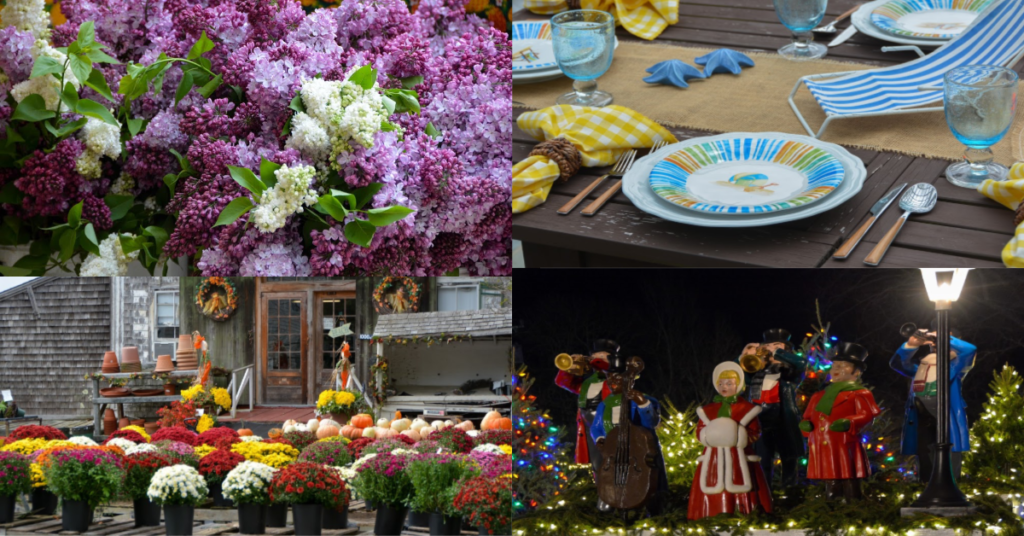 Let’s embrace the meteorological definition, wherein the seasons begin on the first day of the months that include the equinoxes and solstices: 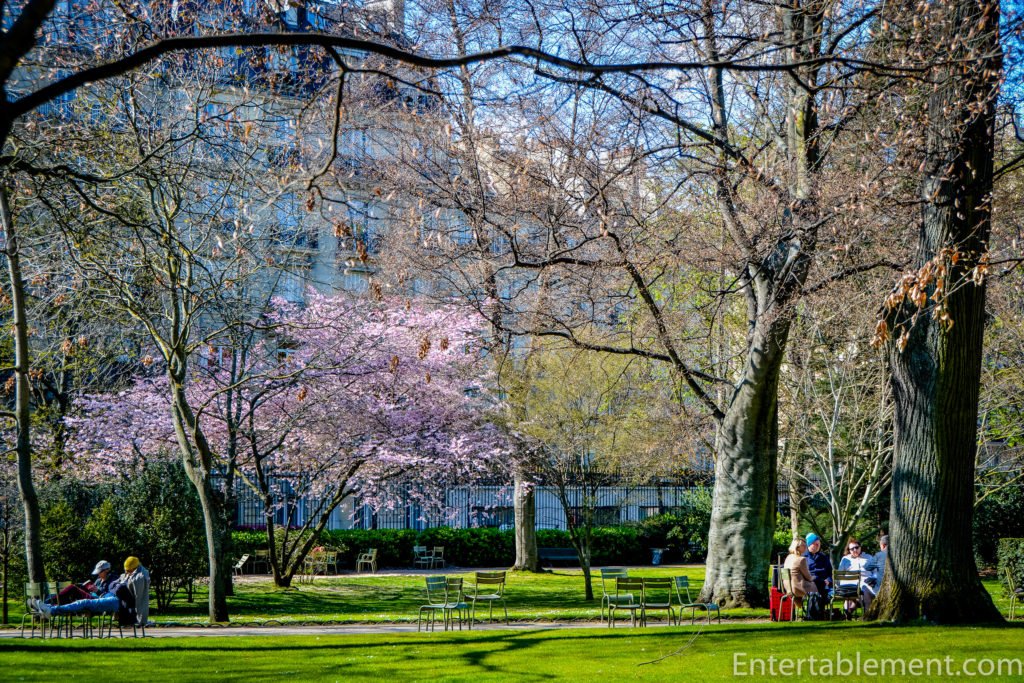 On that happy note, I’ve set a spring(ish) table with Victoria & Albert Clover. 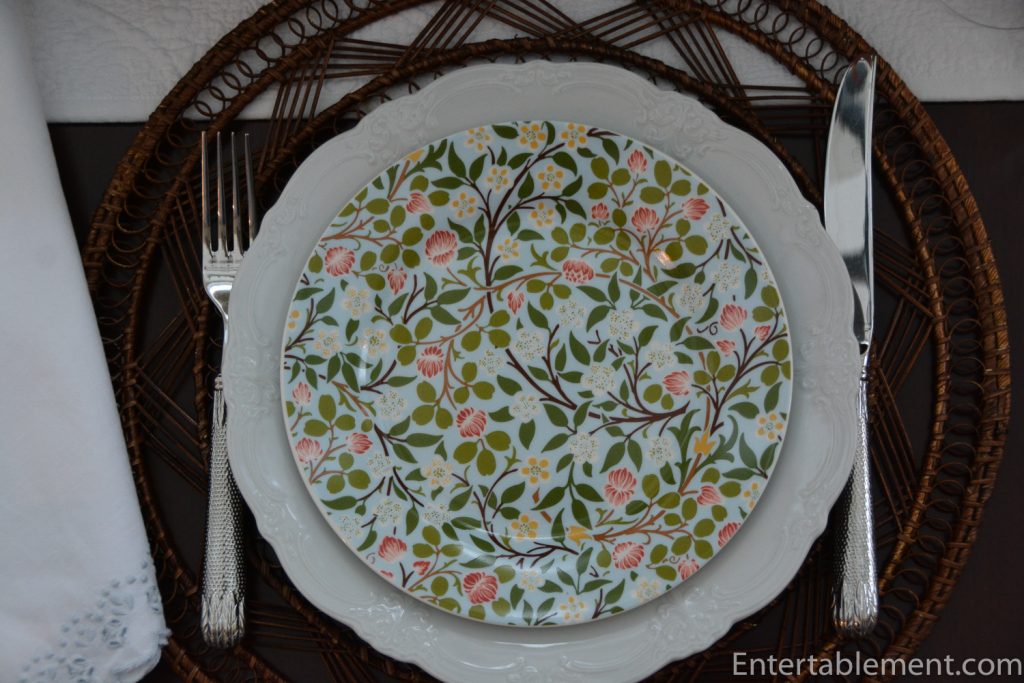 Part of the William Morris collection by Pfaltzgraff, the pattern was adapted from a wallpaper design by one of William Morris’ trainees,  John Henry Dearle for Morris & Co., England from 1912. It’s discontinued, but I’ve seen some available on eBay. 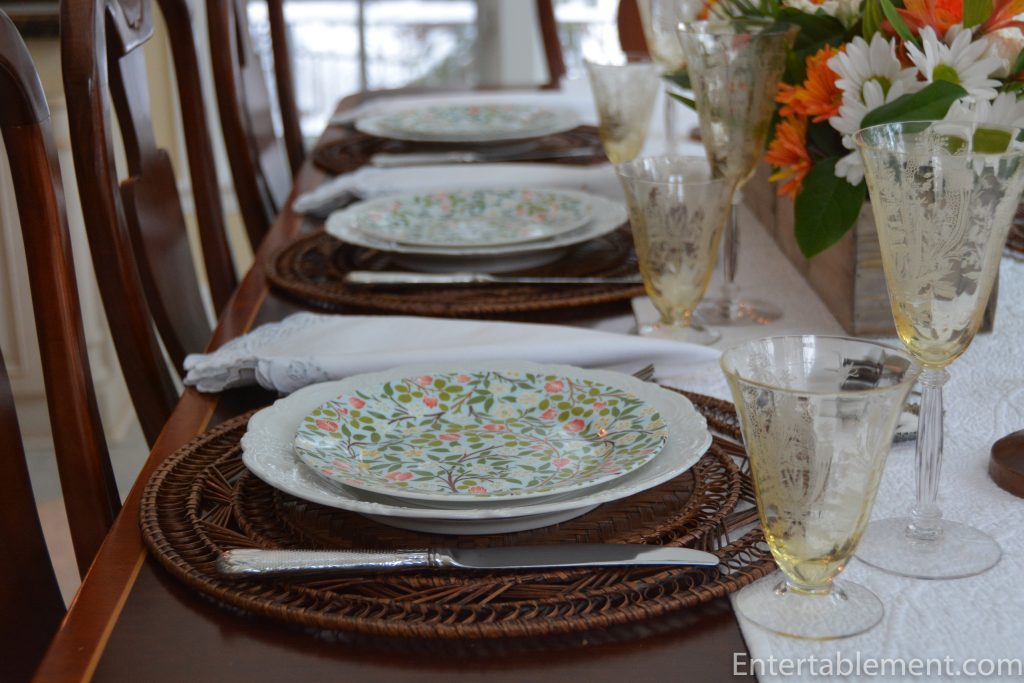 I’m a sucker for the Arts & Crafts style when it’s confined to accent pieces. I don’t think I could live with scads of the wallpapers, featuring exuberant prints in all their glory. The photo below is from the V&A Museum website: 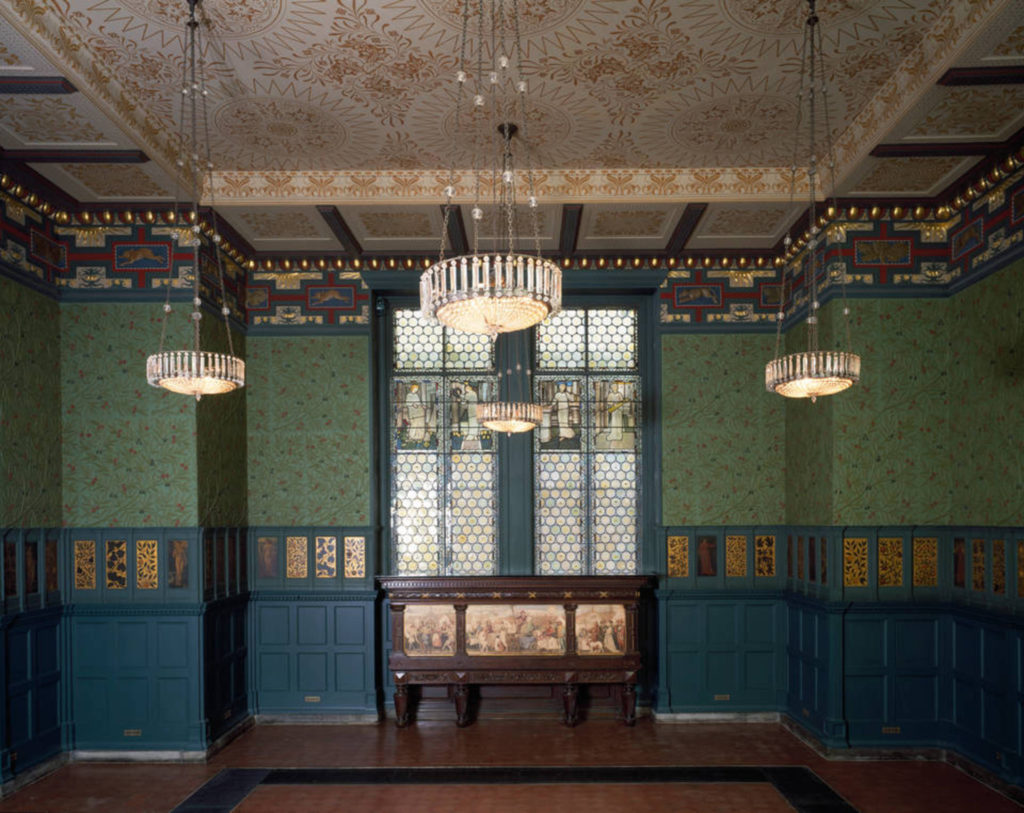 But in small doses, the patterns are wonderful. Here is another one by John Henry Deale for Morris & Co, the Daffodil Mug, available from Kitchencraft in the UK (image courtesy of Kitchencraft). 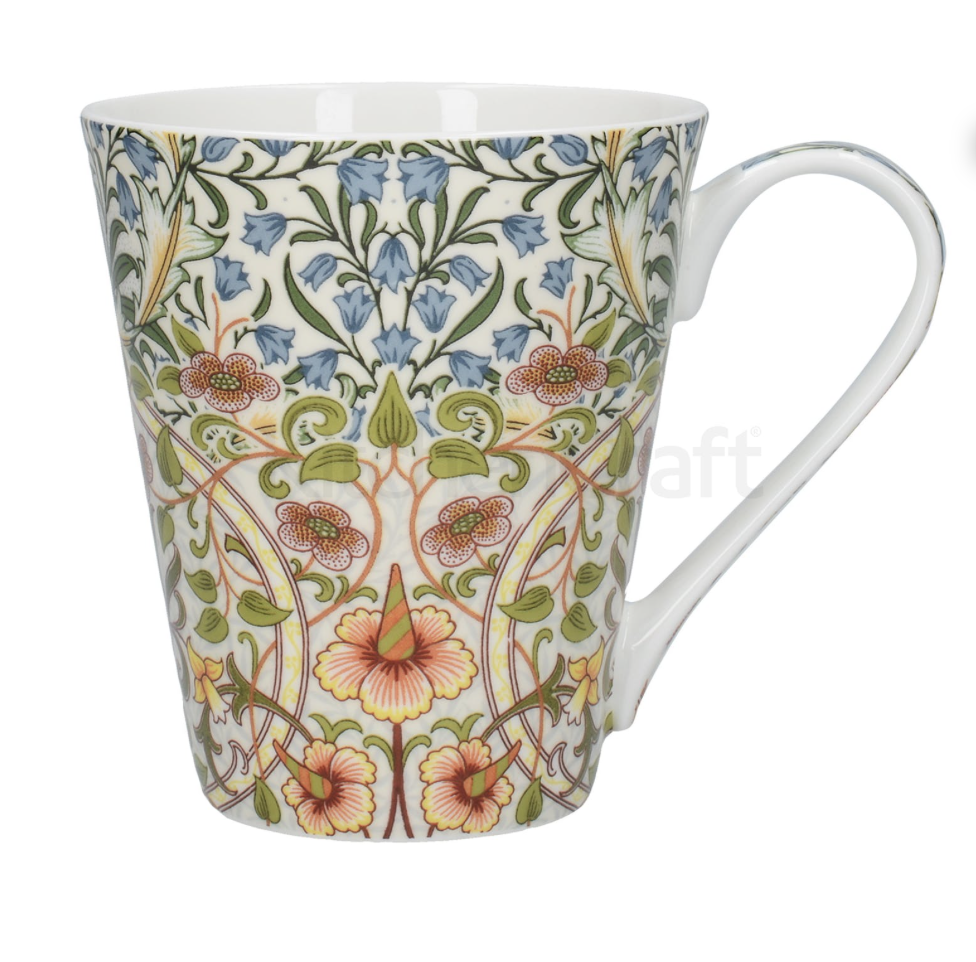 Strawberry Thief is likely William Morris’ best-known pattern and this interpretation is by Spode, who I note has expanded the line quite considerably, with both a red and blue pattern available now on their website. Strawberry Thief’s pattern was registered in 1883, pre-dating Clover by almost 40 years. I adore this set. 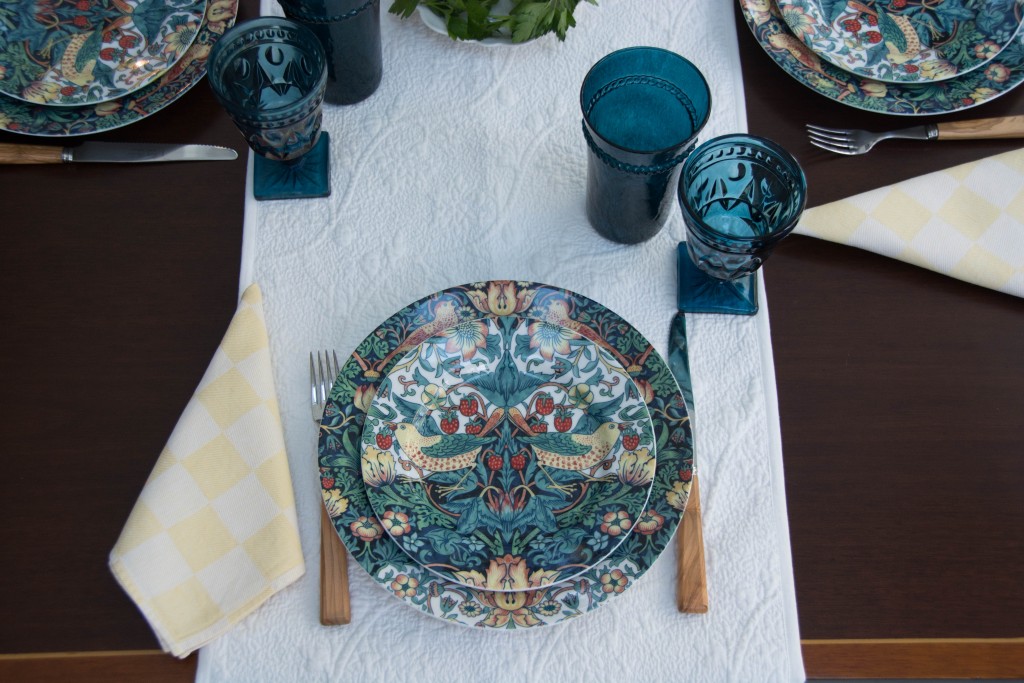 I have only eight salad plates in Clover and its gentle palette lent itself to a somewhat more subdued table. 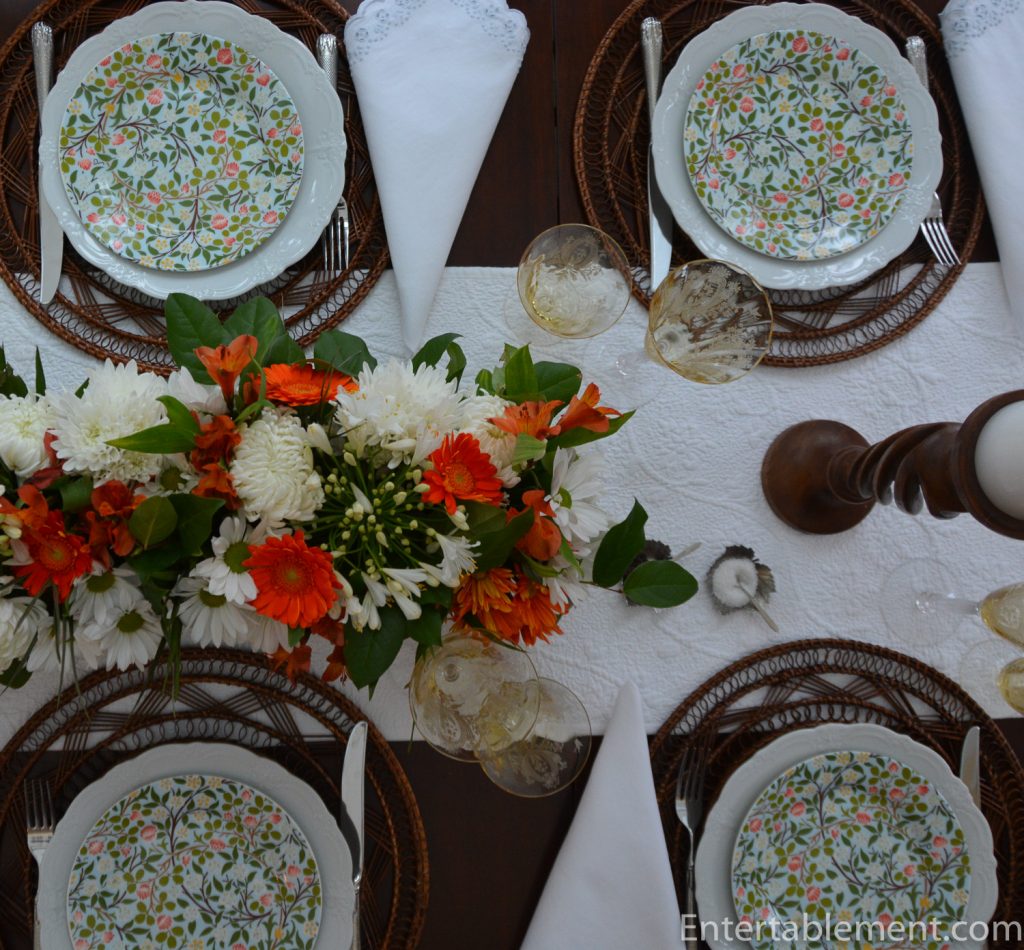 La Fleure Yellow depression glass by Tiffin Franciscan picked up the subtle sunny accents on the plates.  The glasses shown below are the Water glass (the larger stemmed one) and the 10 oz Footed Tumbler. 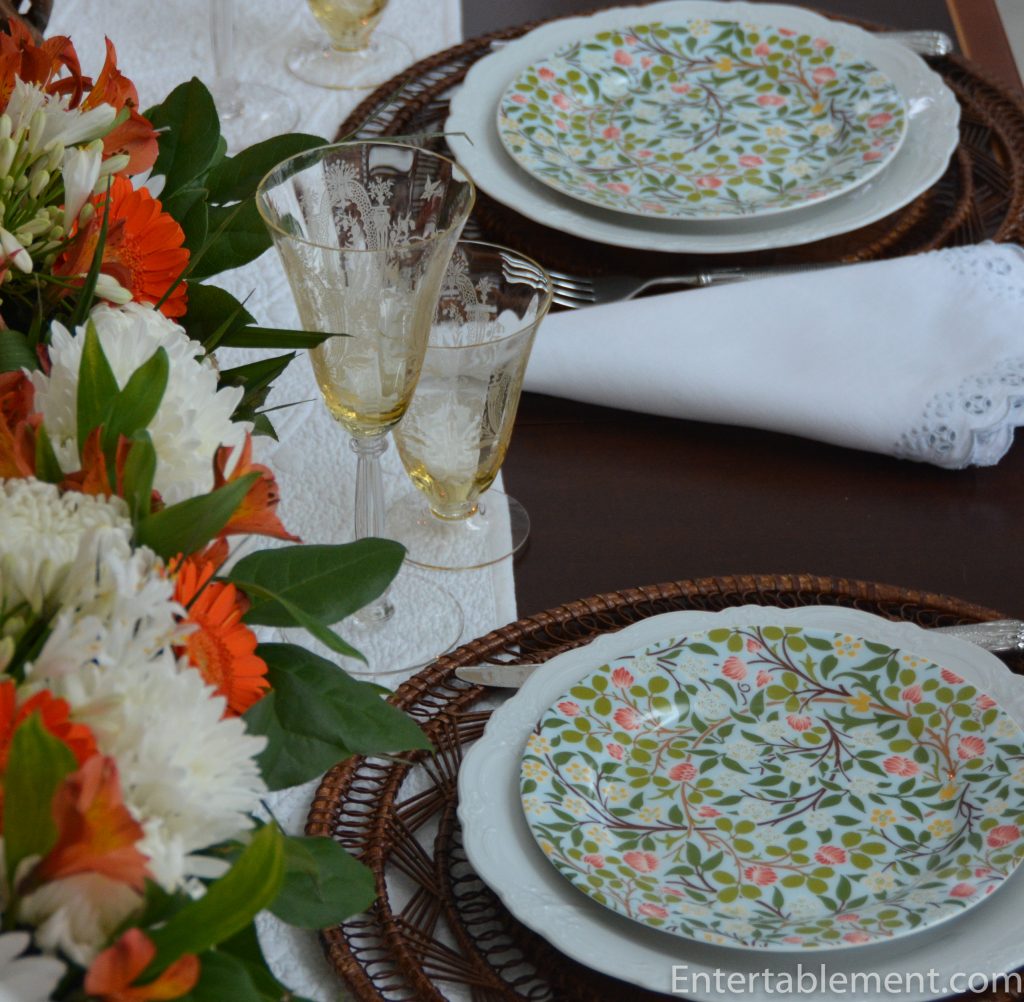 It’s one of my favourite glassware patterns to use in the spring, as the soft shade of yellow goes well with many different patterns, such as Blue Chintz, also by Spode. 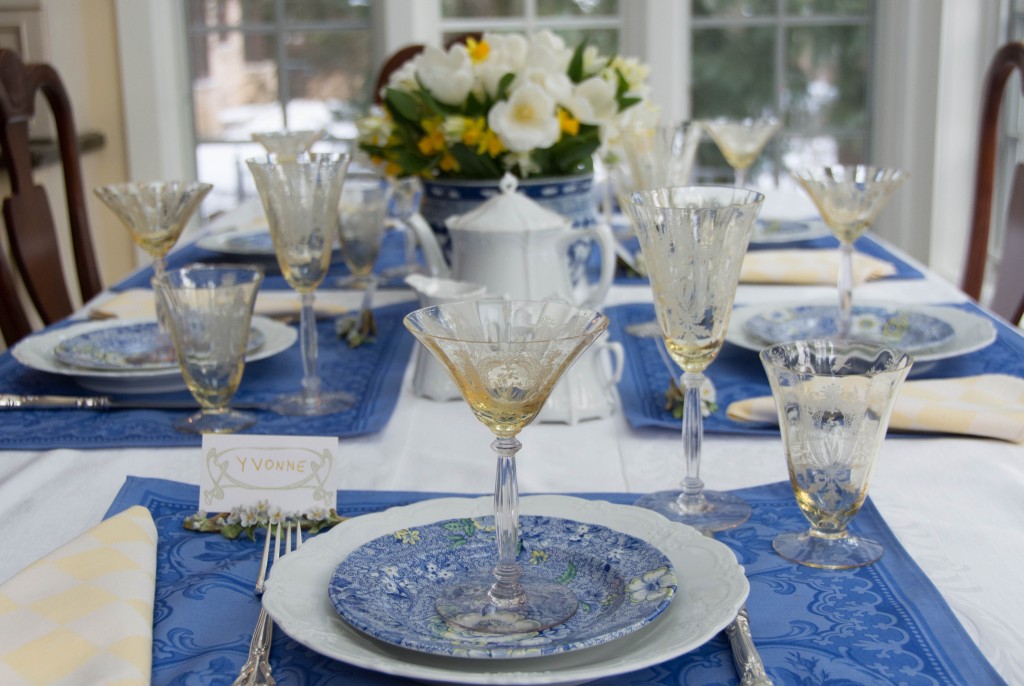 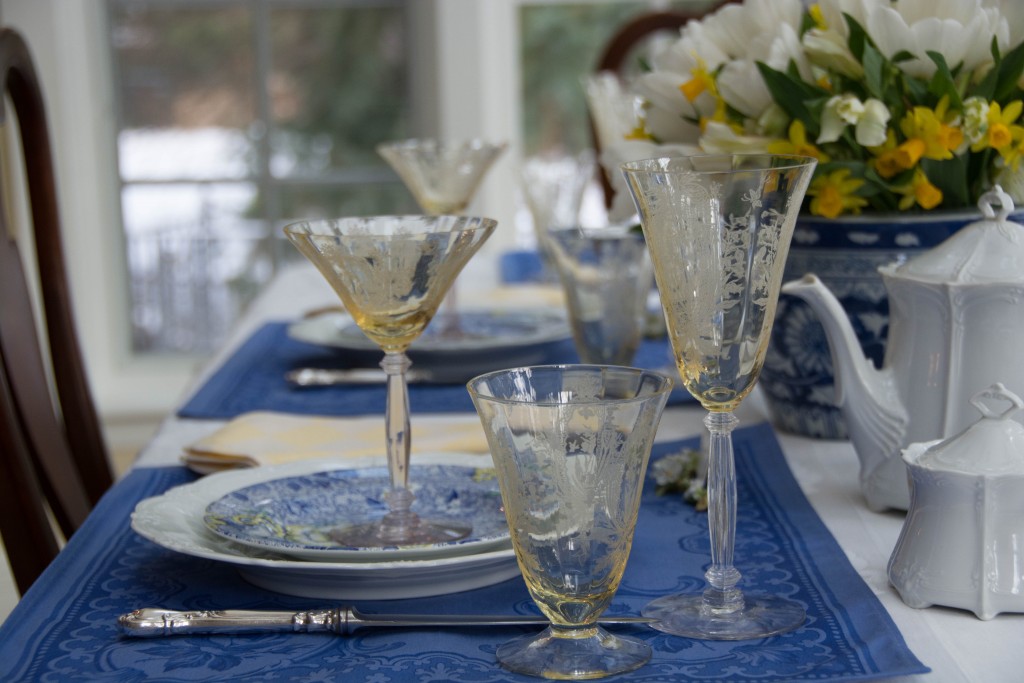 Back to Clover. I styled the table with wooden accents including rattan chargers and some candlesticks in a modern interpretation of a barley twist style. 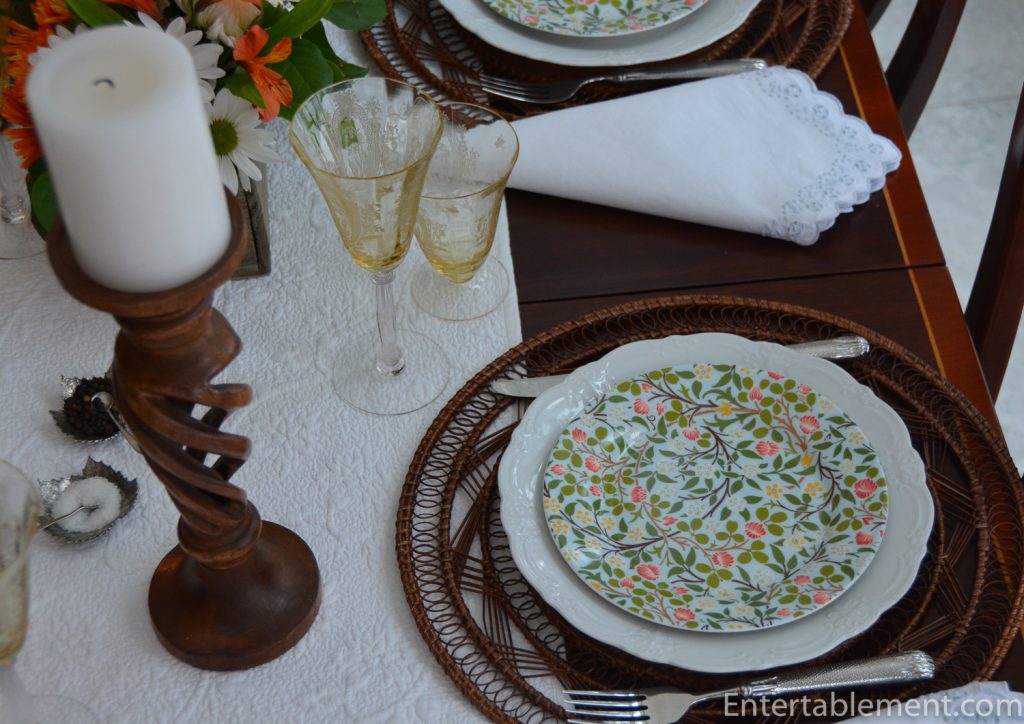 Dinner plates in Baronesse White by Tirschenreuth served as the neutral base for the detail-rich Clover salad plate. 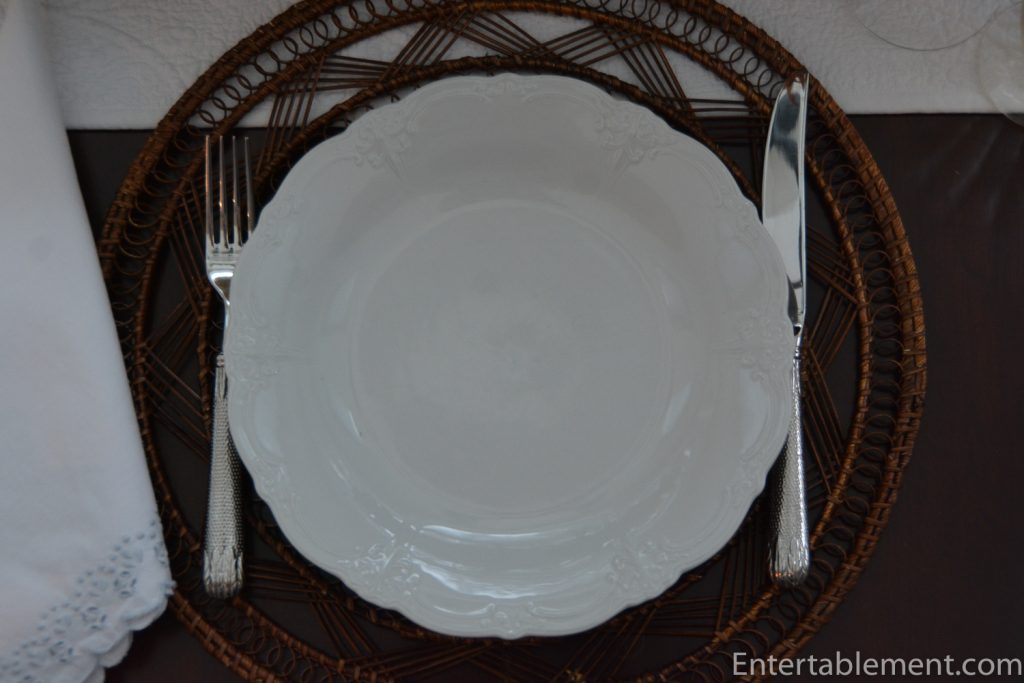 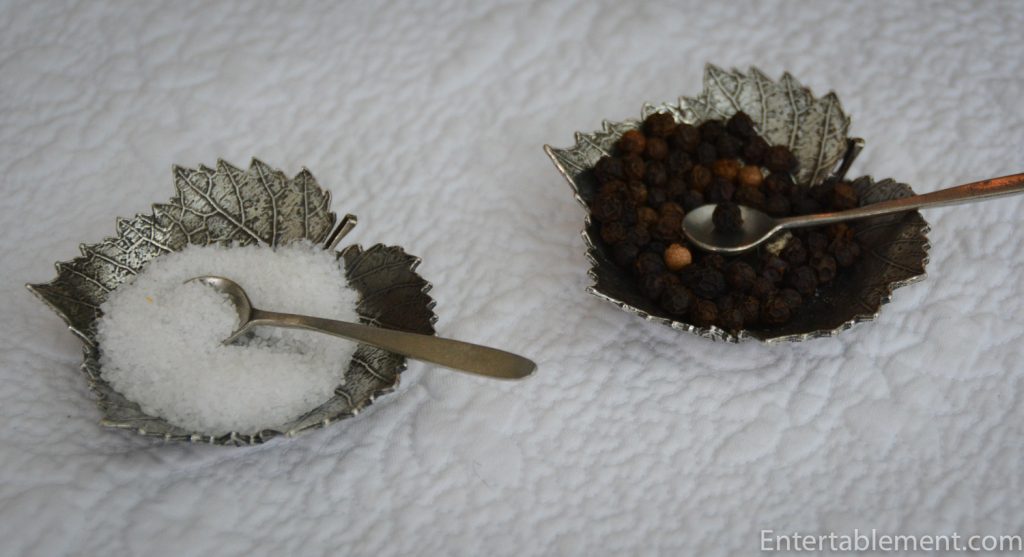 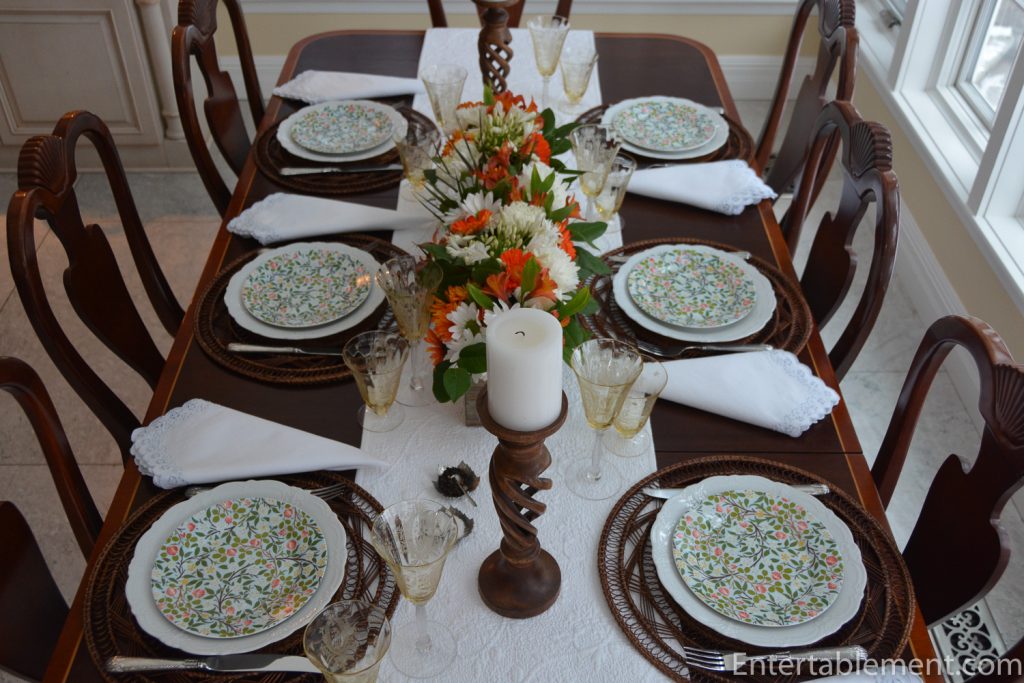 The grocery store supplied a variety of daisies. chrysanthemums and alstroemeria to make a colourful centerpiece. 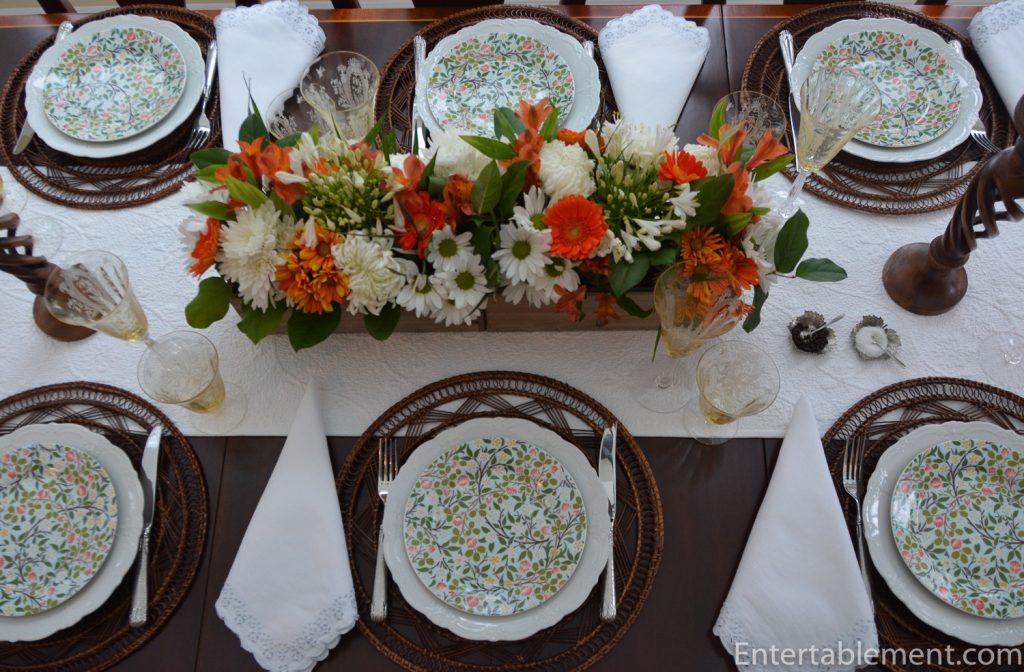 I had been hoping to snag some orange tulips, particularly parrot tulips to use but no luck. 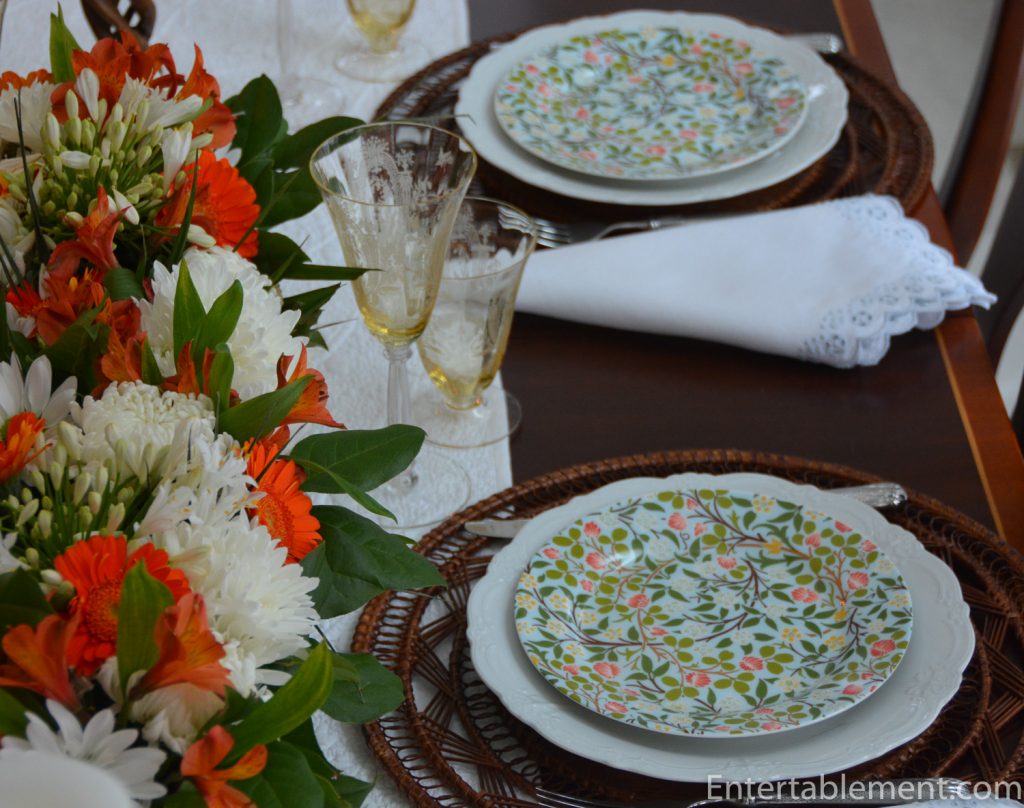 Parrot tulips are in short supply this year, it seems. I’m going to have to search farther afield. They’re one of my fail-safe ways of warding off the winter blues. I’m always ecstatic when I can find a bunch. They look so glorious tucked up together happily in the creamware chestnut bowl (lined with clear plastic!). 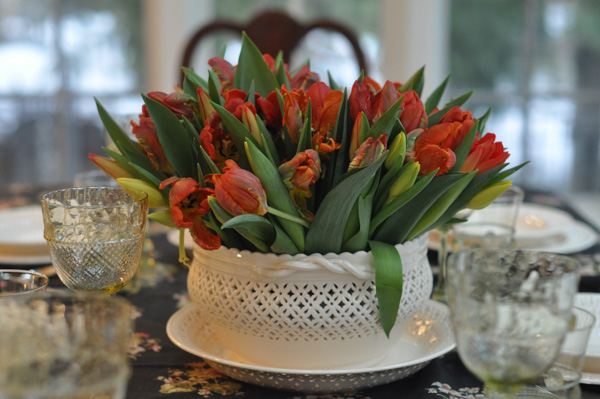 Have a wonderful weekend, everyone. I hope you are doing something fun to mark the beginning of February. 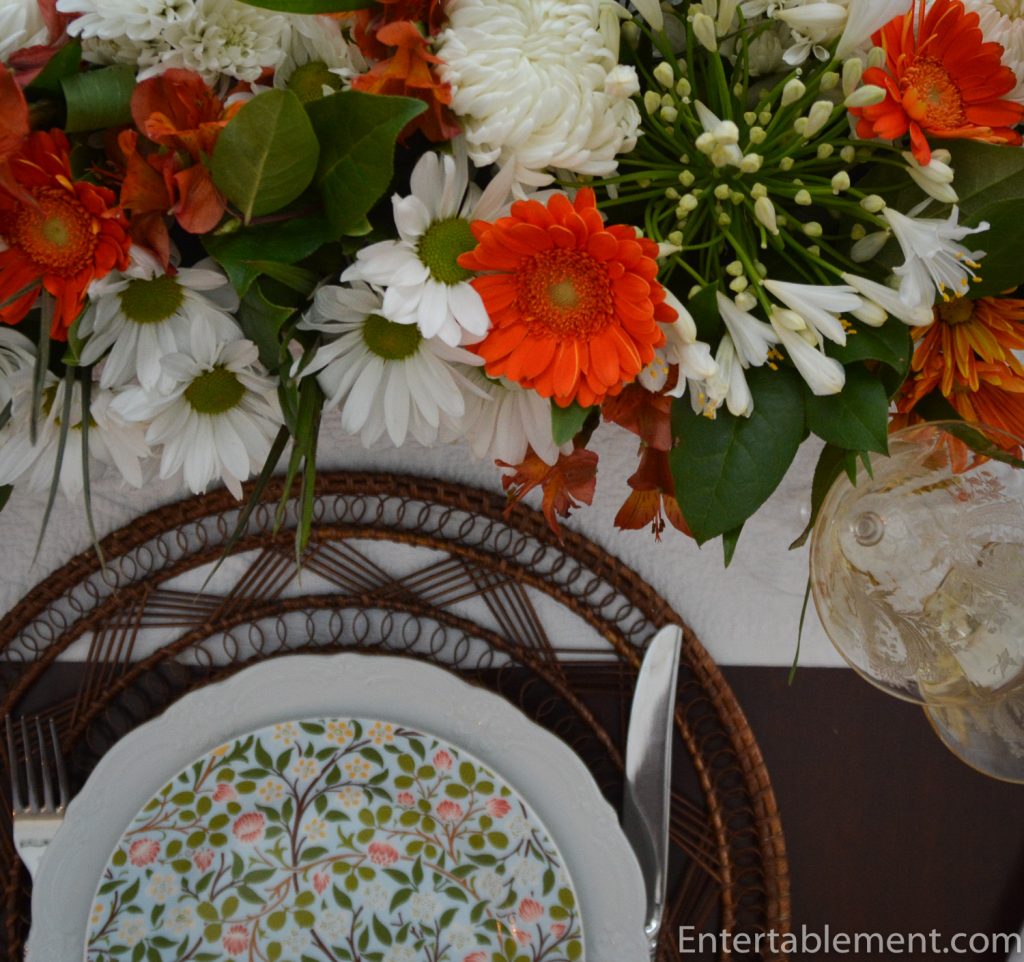 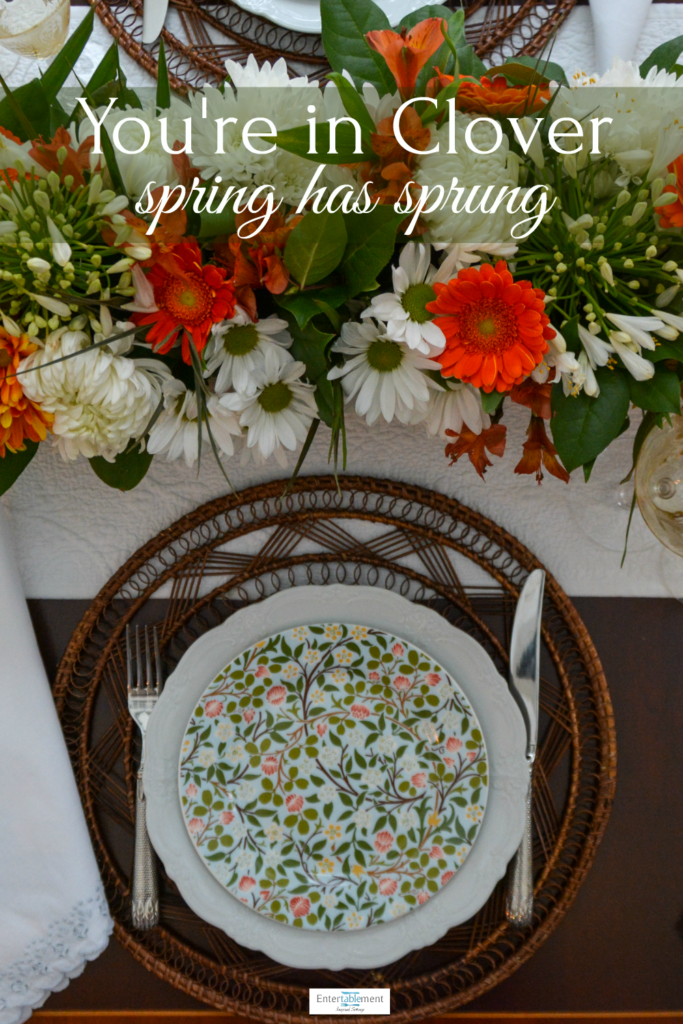