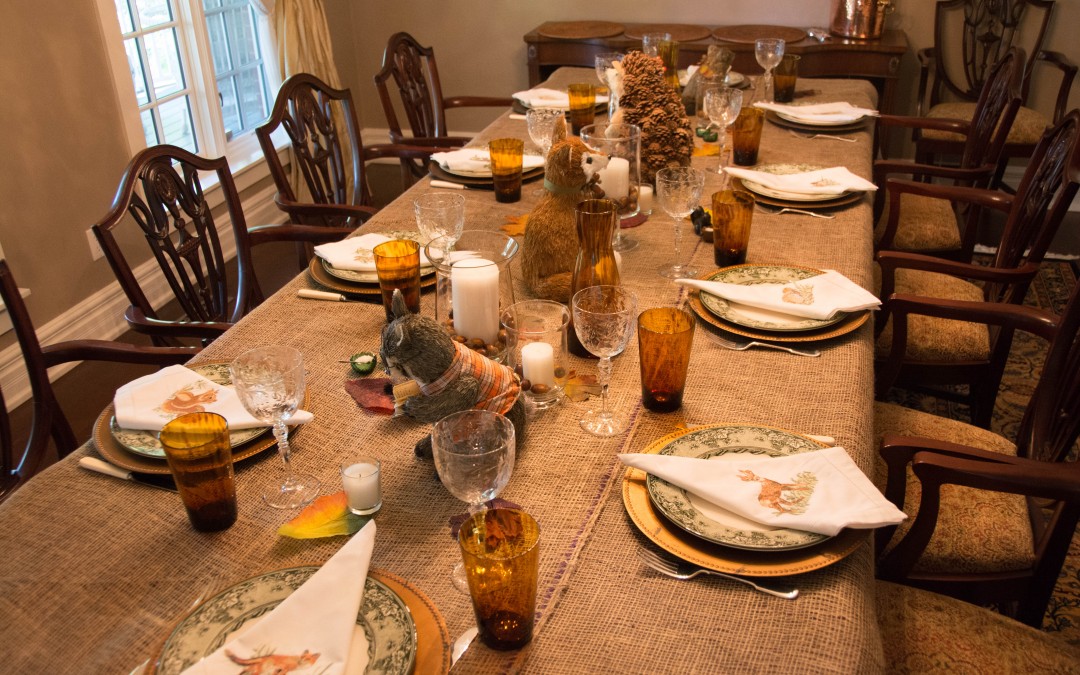 We had our family Thanksgiving dinner a couple of weeks ago. While the chosen date was influenced by the myriad demands that co-exist with family of our size and complexity (in-laws, outlaws, ex-laws…), it was selected more from a real desire to have everyone present than anything else. Like many mothers I believe, it means a lot less to me to have a holiday on the official date than it does to have all the faces round the table(s), family dramas, frazzled new mothers, and sugar-buzzed small fry notwithstanding. 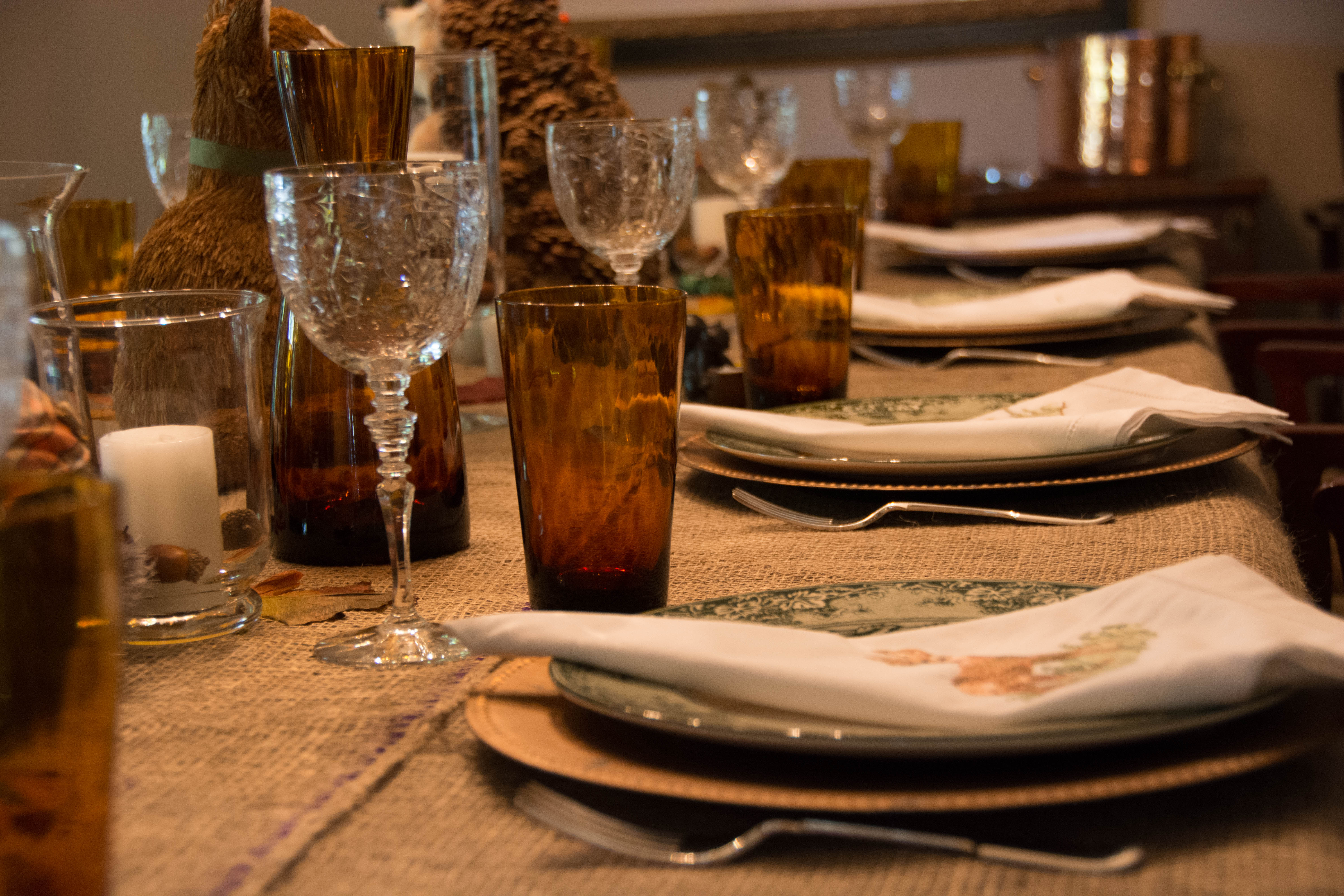 I opted for a very casual theme this year. Burlap from the local nursery served as the tablecloth. I used woodland-theme figurines and tortoise glasses from PierOne, and Kent Green Vine transferware plates from Williams Sonoma (now discontinued, but available from Replacements.com). The antique wheel-cut goblets are from Elise Abrams Antiques. 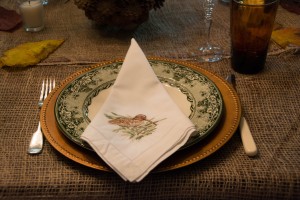 Long-billed bird of some sort 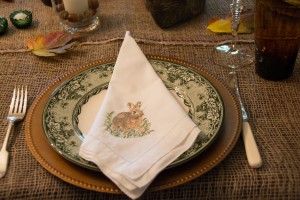 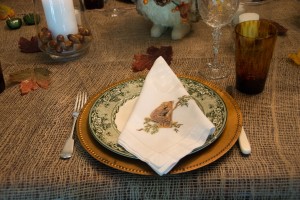 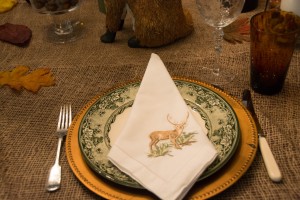 The napkins are a purchase from long ago and feature embroidered animals. When Lauren was little, she would carefully select napkins that she thought reflected the personality of each family member. Her choices varied from year to year, depending on her views. I seem to recall we have more than one goat… 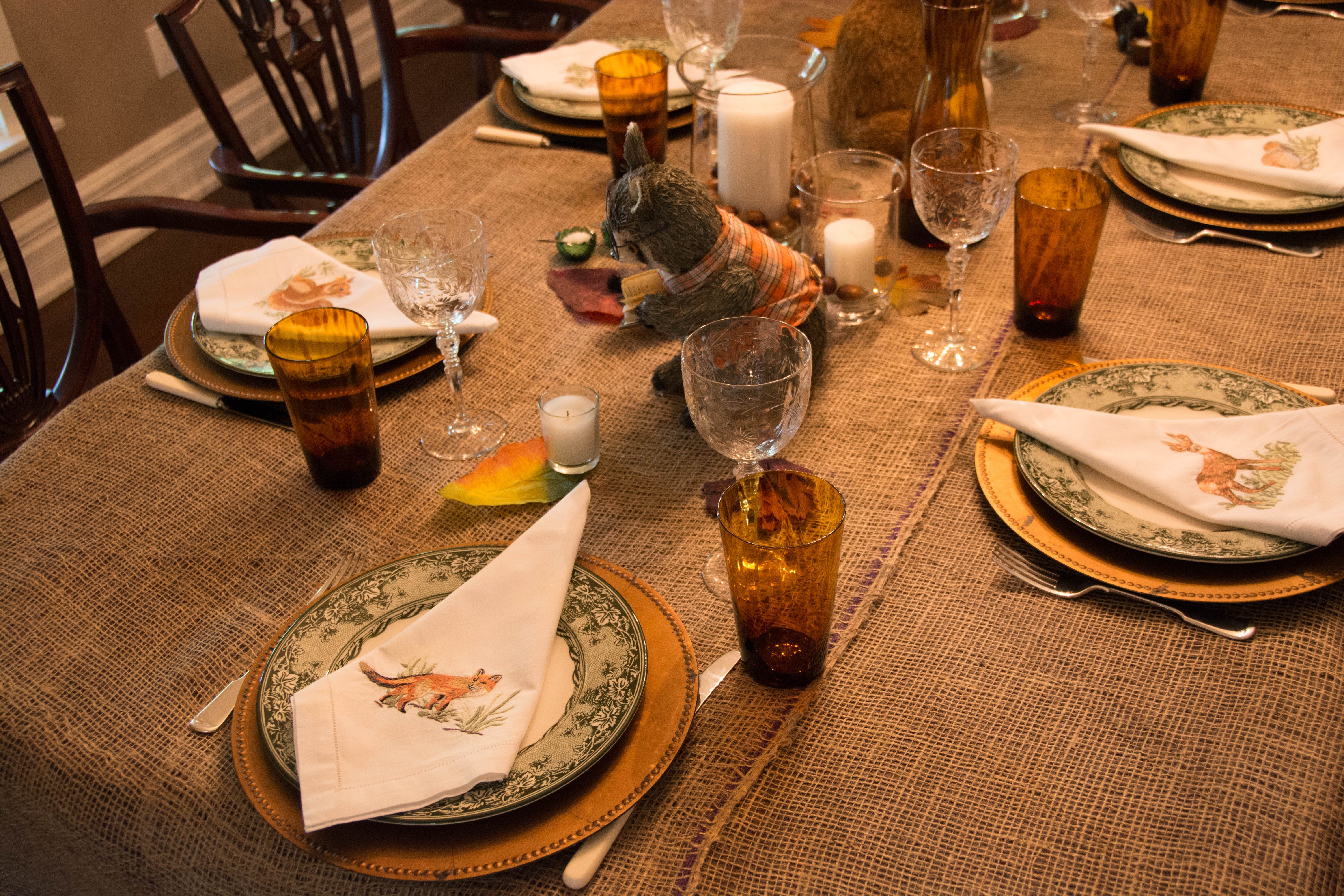 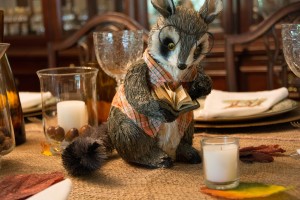 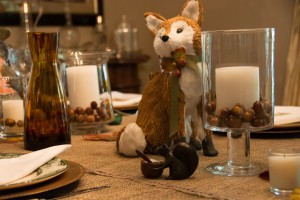 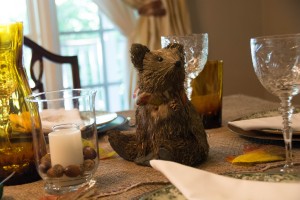 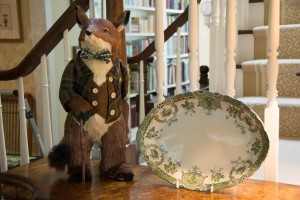 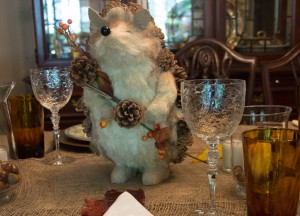 Hedgehog – his back is made entirely of pinecones

I had a lot of fun choosing the figurines and knew they would enchant the little girls. The adults were pretty taken with them, also. 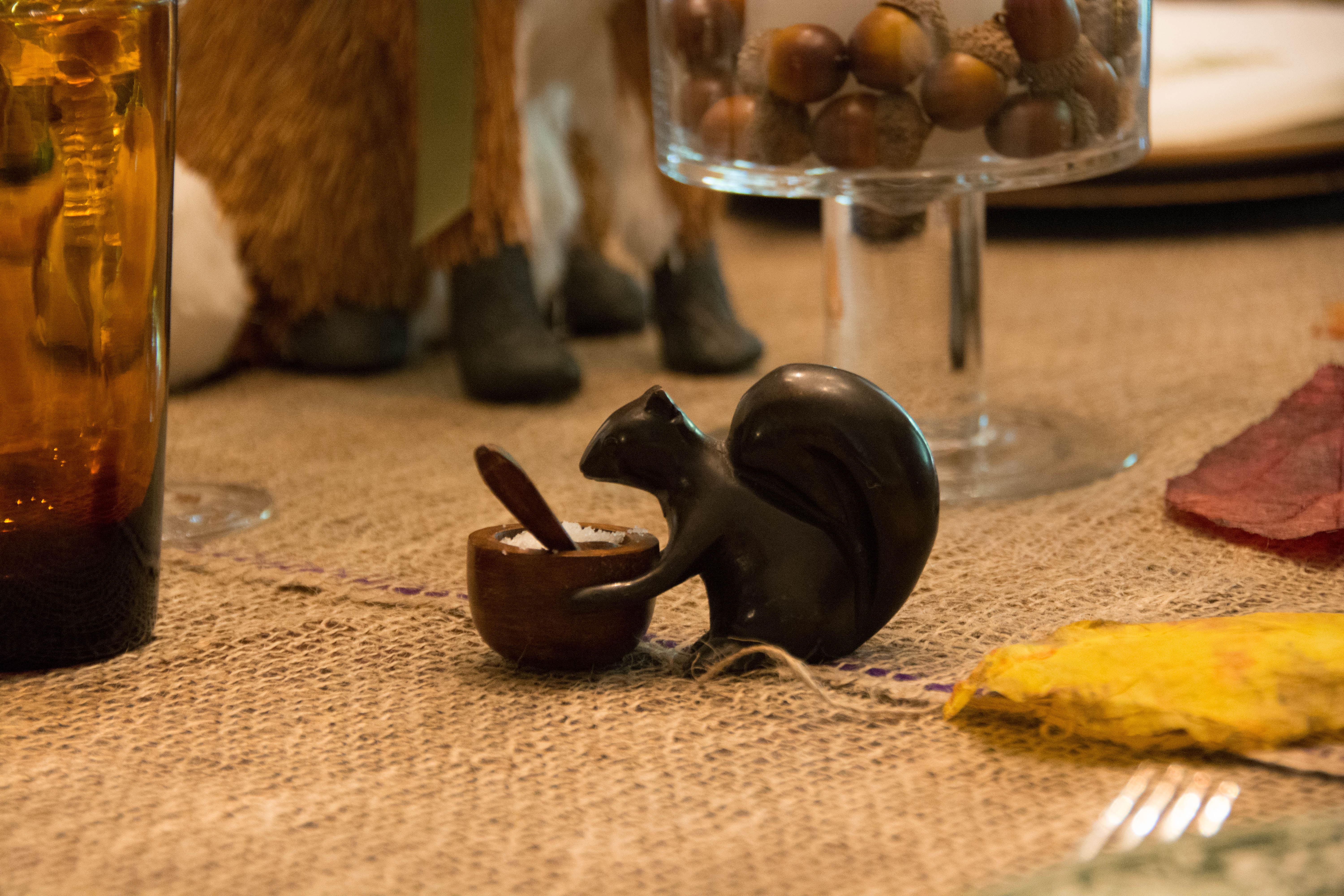 This guy has been around for quite a while, and hails from Pottery Barn. 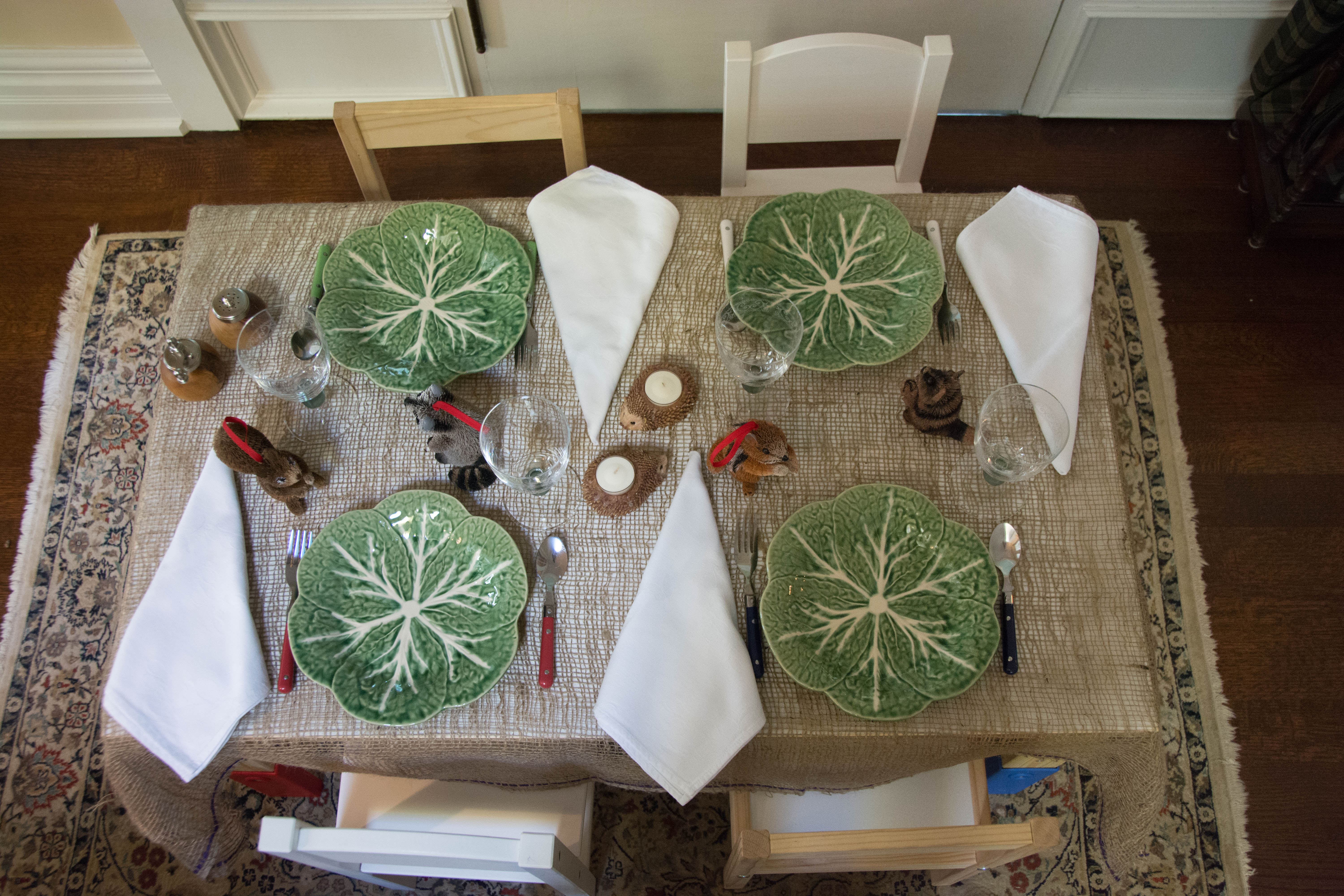 With the addition of Riley in mid-August, we now count five little granddaughters, aged five and under.  The children’s table is a natural evolution, and the girls giggle happily among themselves while ignoring most of the food on their plates. Children have not changed, I notice! 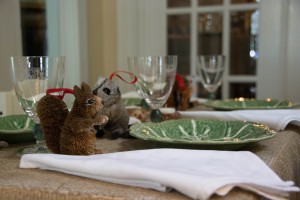 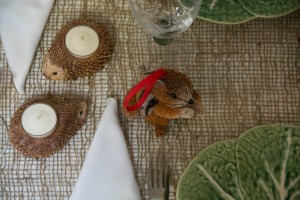 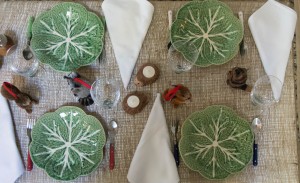 As it is the actual Canadian Thanksgiving weekend now, may I wish a Healthy and Happy Thanksgiving to all my Canadian readers. Bon appetit!