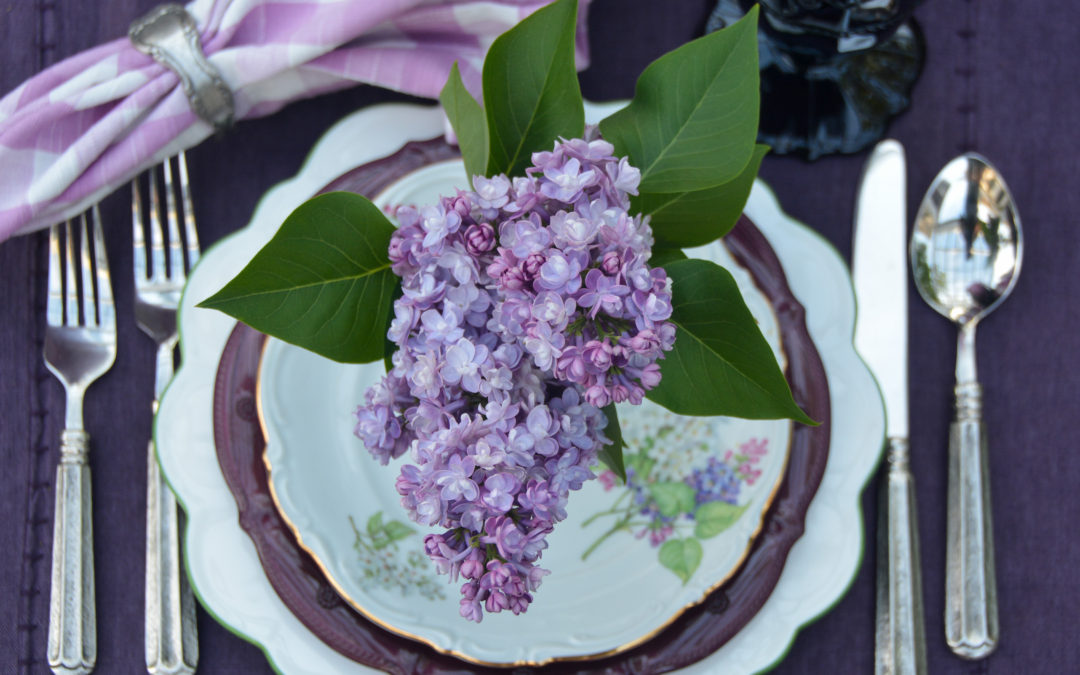 It’s that blissful time of year where the air is redolent with the heavenly scent of lilacs. 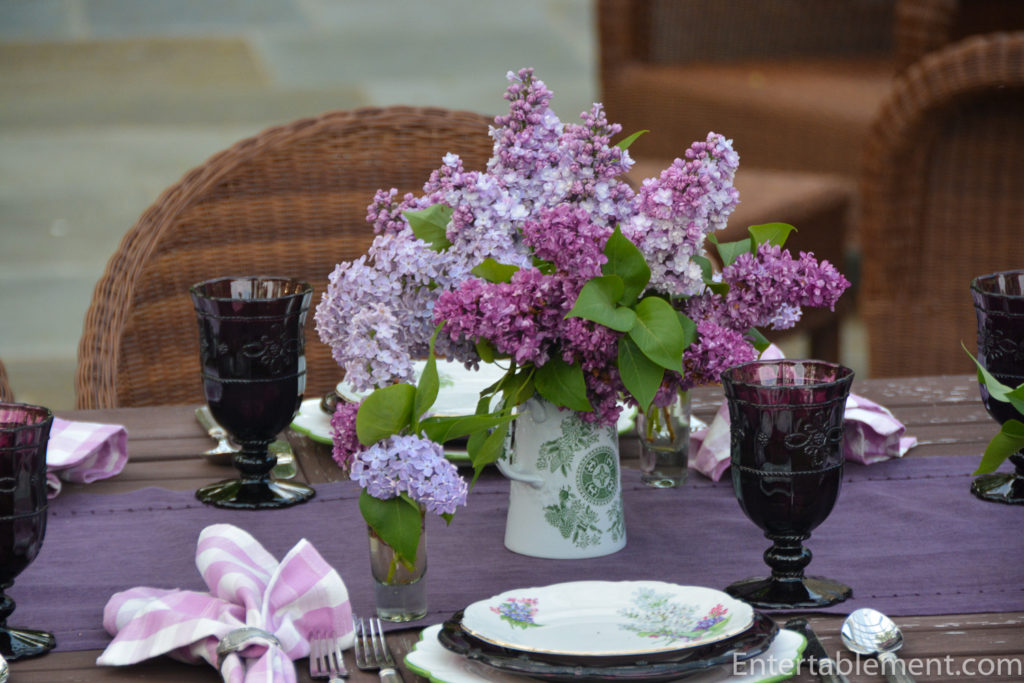 I can’t get enough of them. We have three bushes on our Cape property, two of the “common” pale purple colour and one of the deeper purple French variety. 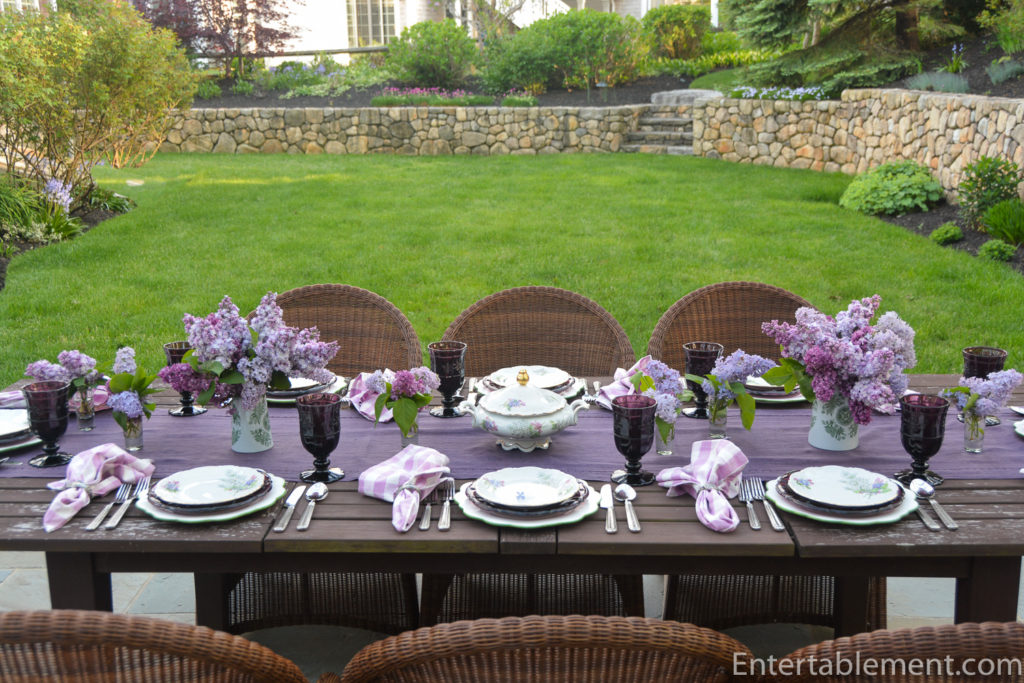 I have no white lilacs but plan to rectify that this year with the addition of a dwarf shrub to go near the back door and have earmarked space for a large one in the side garden, above the wall you see in the background Meanwhile. I’ve been reduced to begging them from neighbours or hastily pulling over to the side of the road when a likely candidate for snipping is spotted. 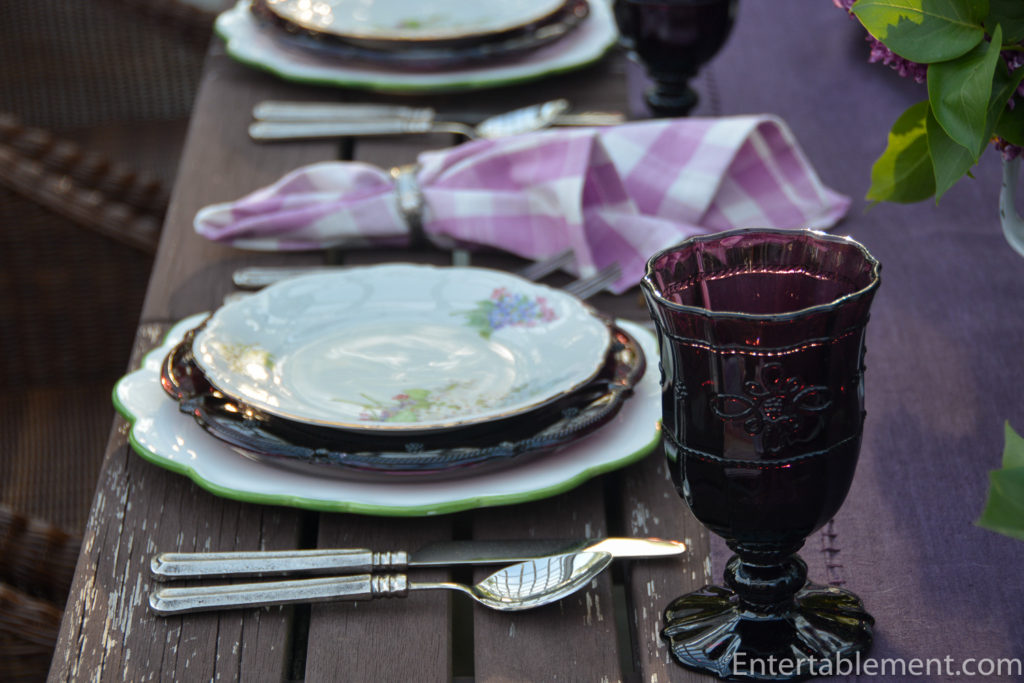 I have a small vase of lilac blooms on my bedside table; their divine scent greets me if I wake in the night, and is a welcome way to meet the morning. The only downside is Dundee the Diabolical, who likes nothing better than to liberate one of the stems with his teeth and scamper off with it, leaving an overturned vase and a trail of shredded florets in his wake. 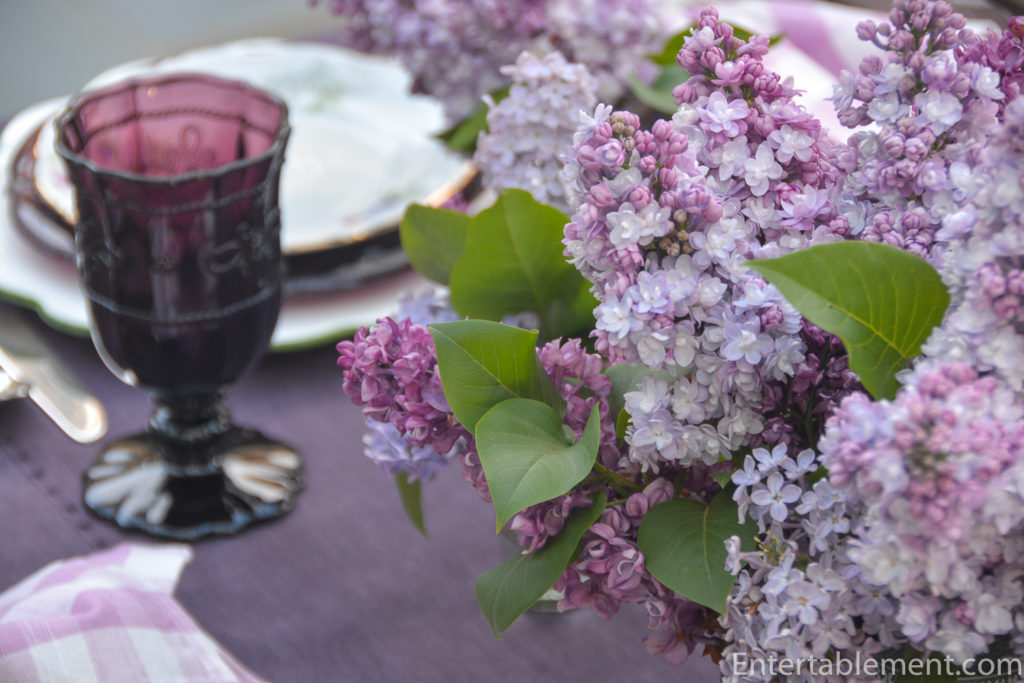 The large bush on our side garden provides outstanding blooms on straight, thick stems. They last really well. I find the blooms from the more straggly branches wilt very quickly, likely because the stem doesn’t support sufficient water uptake. So this year, once the blooms are finished, the shrubs are getting a good pruning, even if it involves buying some lopping shears to get to the top branches. 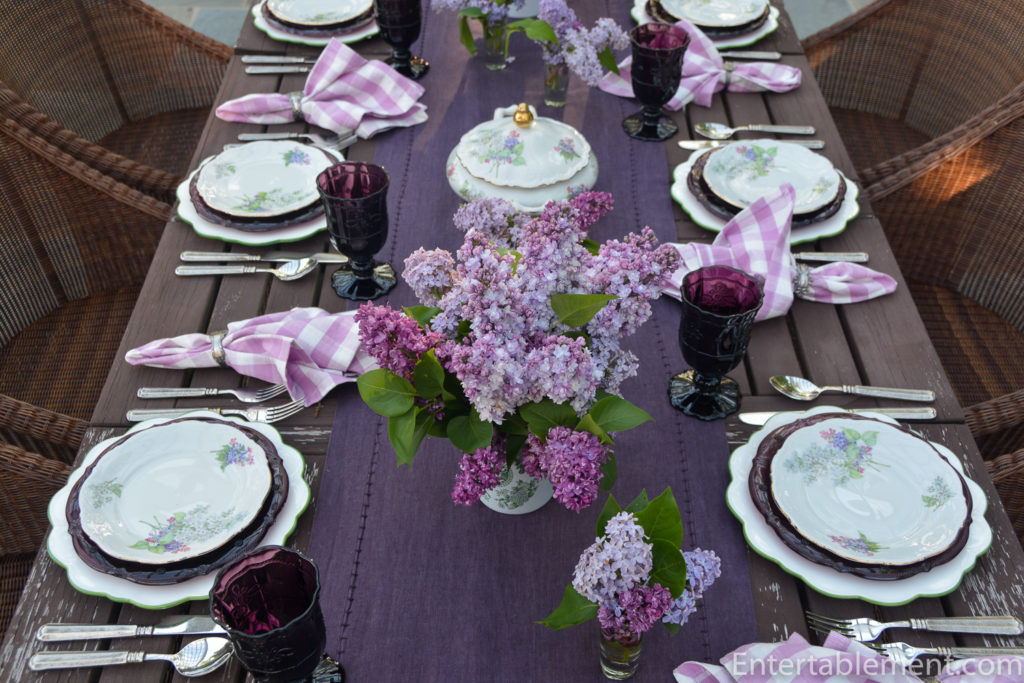 I’ve had the lilac plates for years, but never seem to be where the plates were at lilac blooming time. So this year I brought them with me to the Cape and was delighted to catch the season. 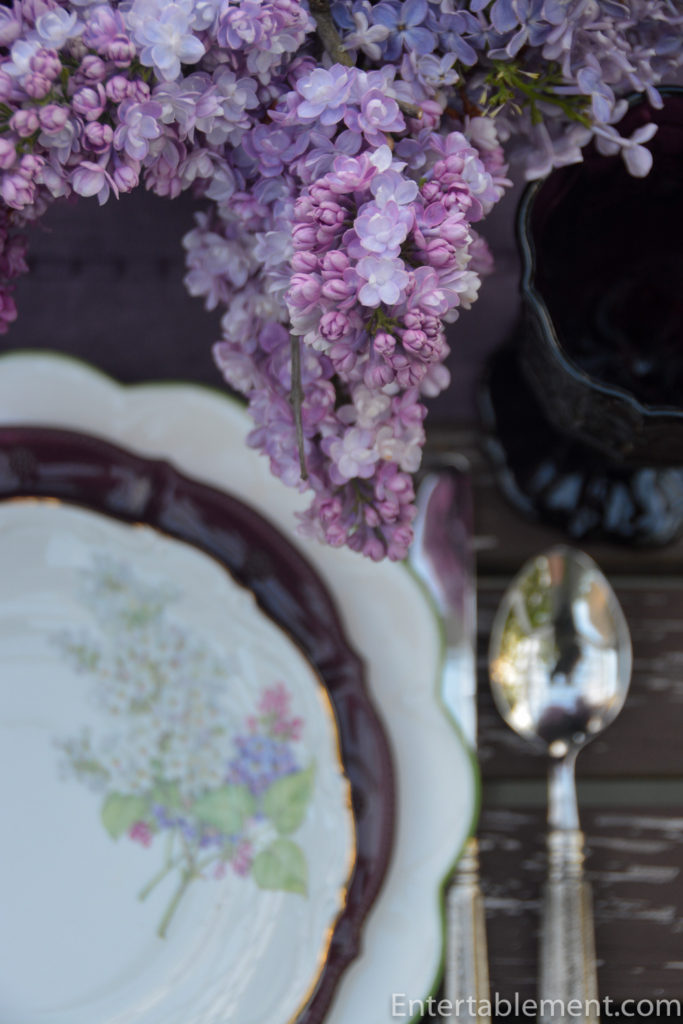 The dinner plate is Aerin Scalloped Rim Green from Williams Sonoma. (The table needs its yearly coat of stain, I see). 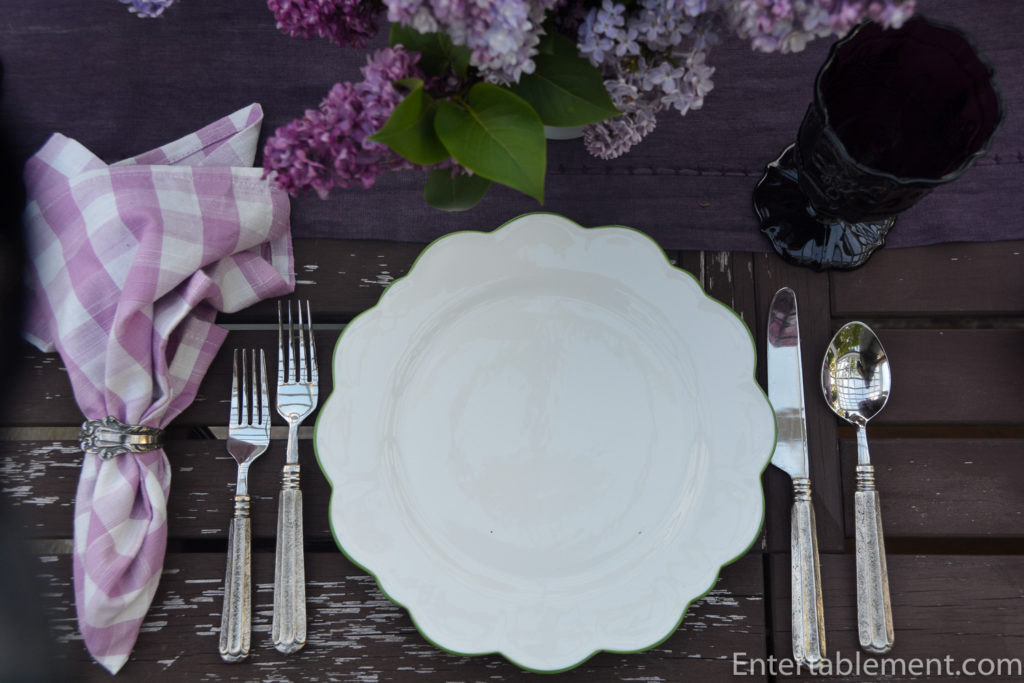 And is topped with Colette Purple by Juliska; the footed tumbler is the same pattern, now sadly discontinued. 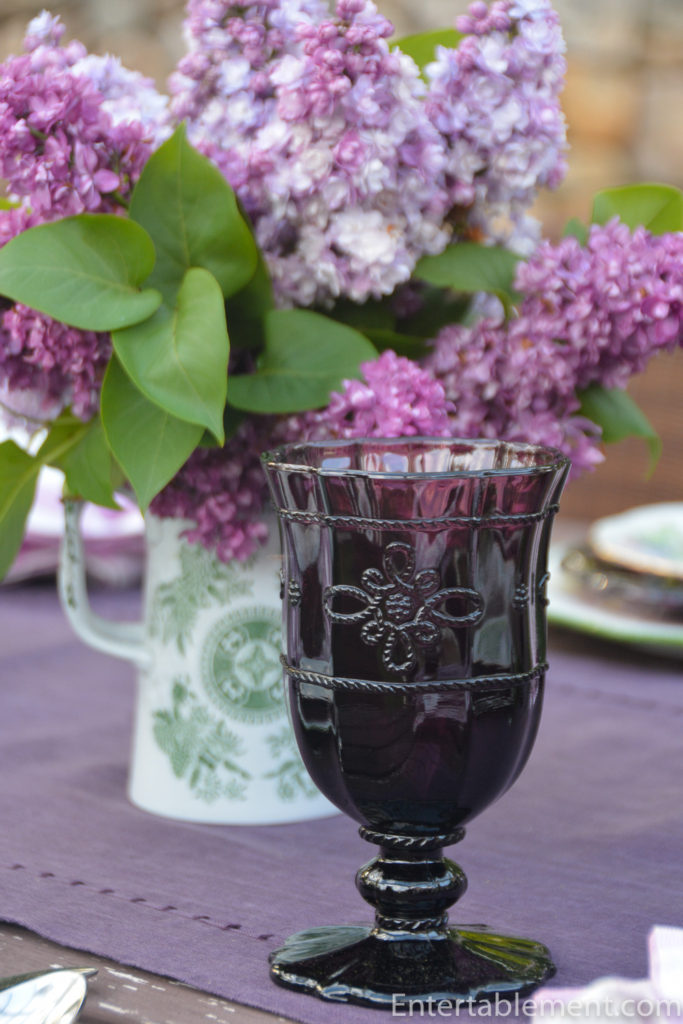 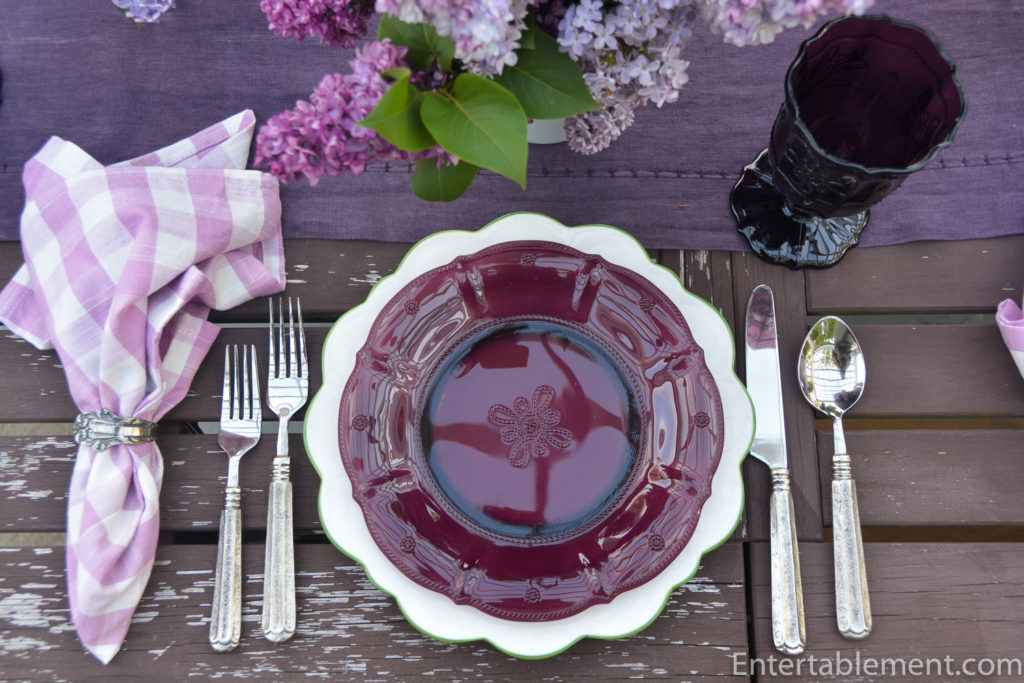 Lastly, we have Lilac by Mitterteich, Bavaria, Germany from the 1920s. Replacements have some pieces and there are lots available on eBay. 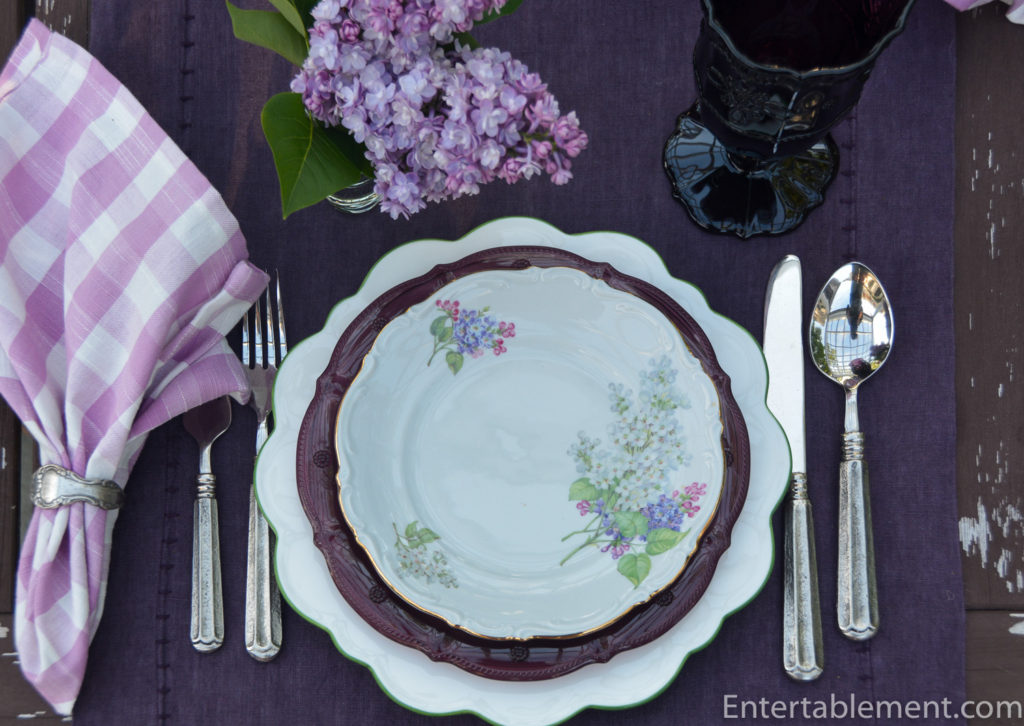 I can’t remember where I got the napkins. The napkin rings are from many years ago, though I noticed that Pier 1 has brought out a set of four Silver Vintage Spoon napkin rings, which are similar. Online only. The flatware is Danieli from World Market. 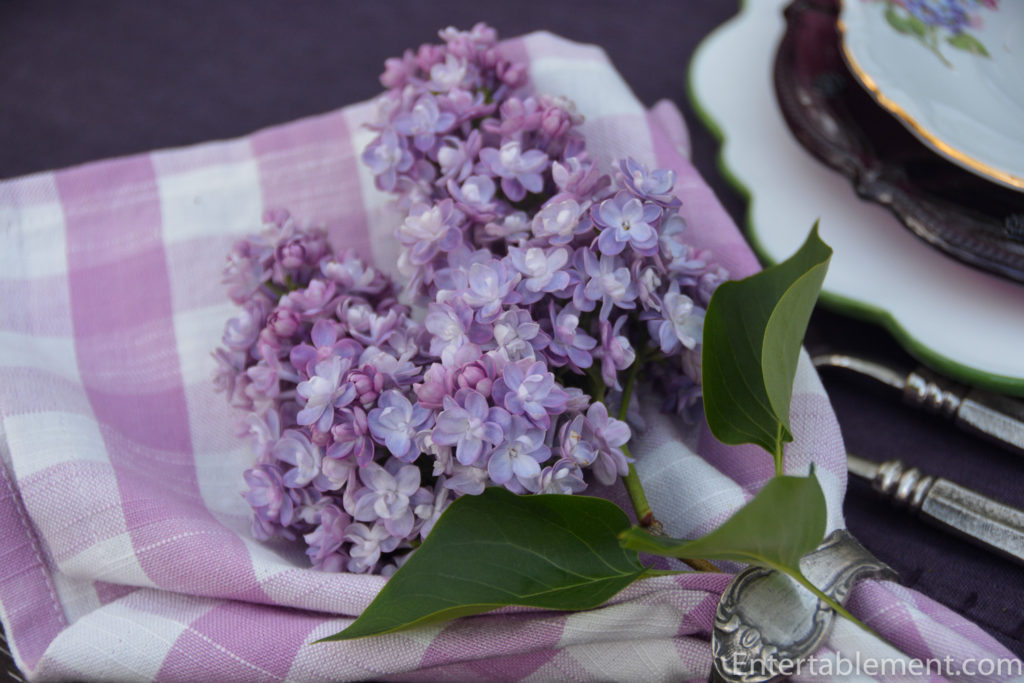 I was lucky enough to snag a covered vegetable dish when I bought the plates. 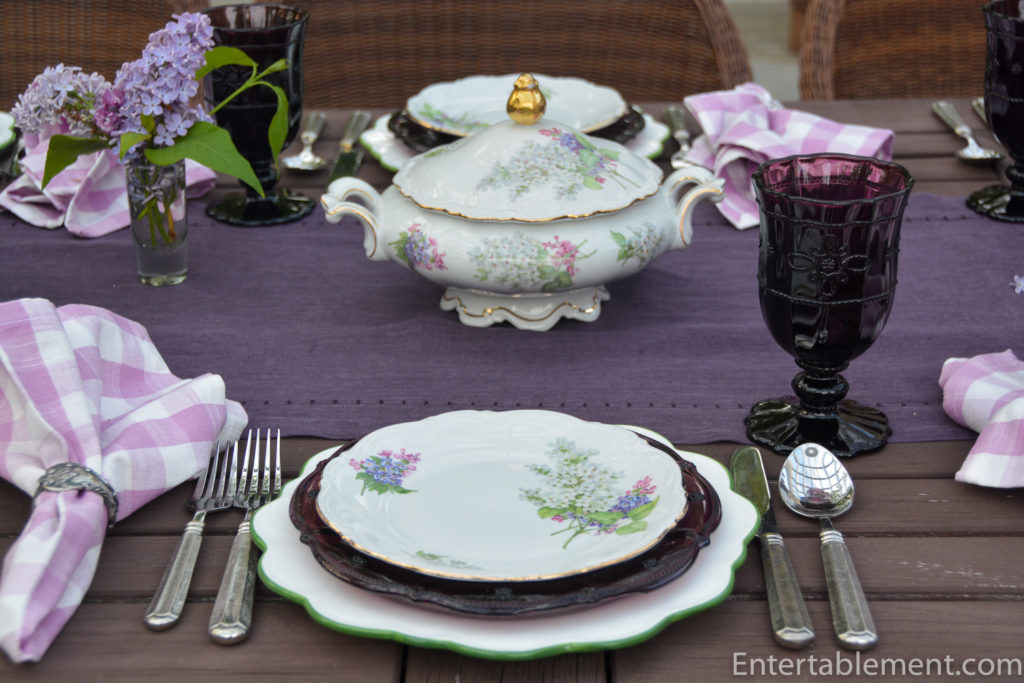 Pitchers in the Fitzhugh Green by Spode pattern make good flower vases for lilacs. They’re wide enough at the top to accommodate all the fiddly branch bits. 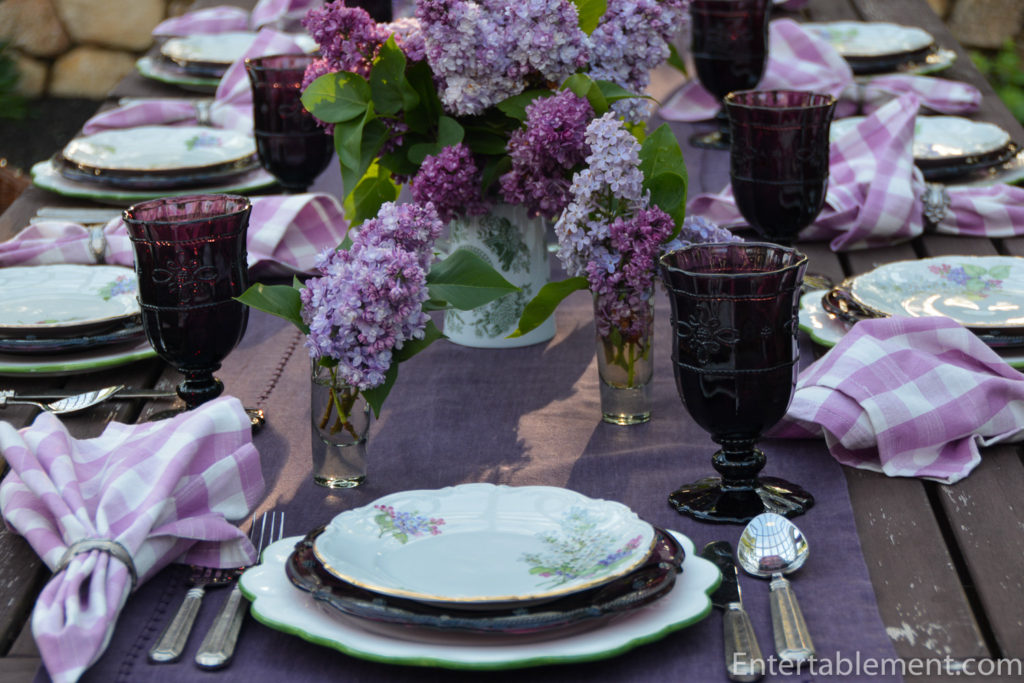 I recently learned that lilacs belong to the Oleaceae family, which has more than twenty different plant species, including olive, ash and jasmine. 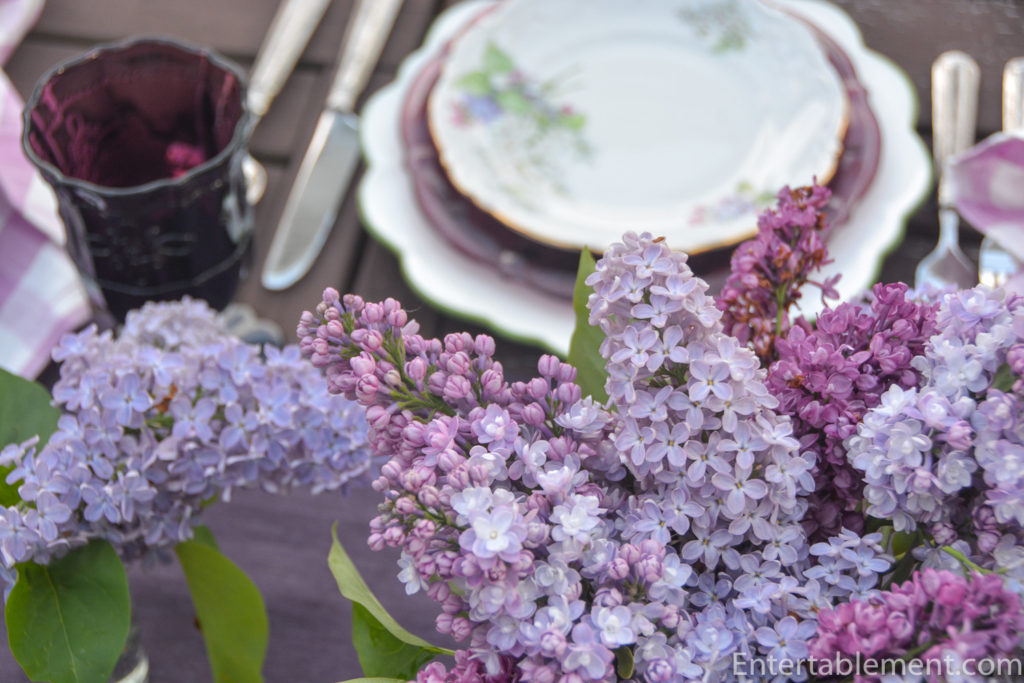 There are more than 1,000 varieties of lilacs, including some trees. Usually, lilacs trees reach about 20 feet in height, though some varieties, such as the Peking and Japanese tree lilac, can grow more than 30 feet tall. 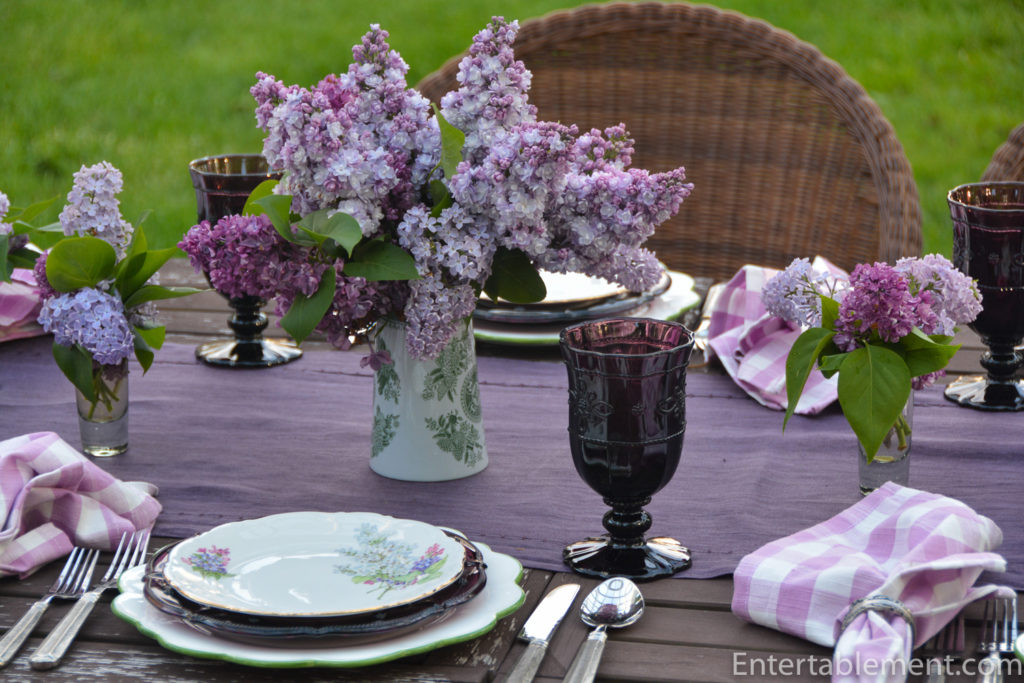 Lilacs are rooted in Greek mythology. The Greek god Pan was in love with a nymph named Syringa. Afraid of him, she turned herself into a lilac shrub one day when he was pursuing her. Pan found the shrub and used part of it to create his panpipe. 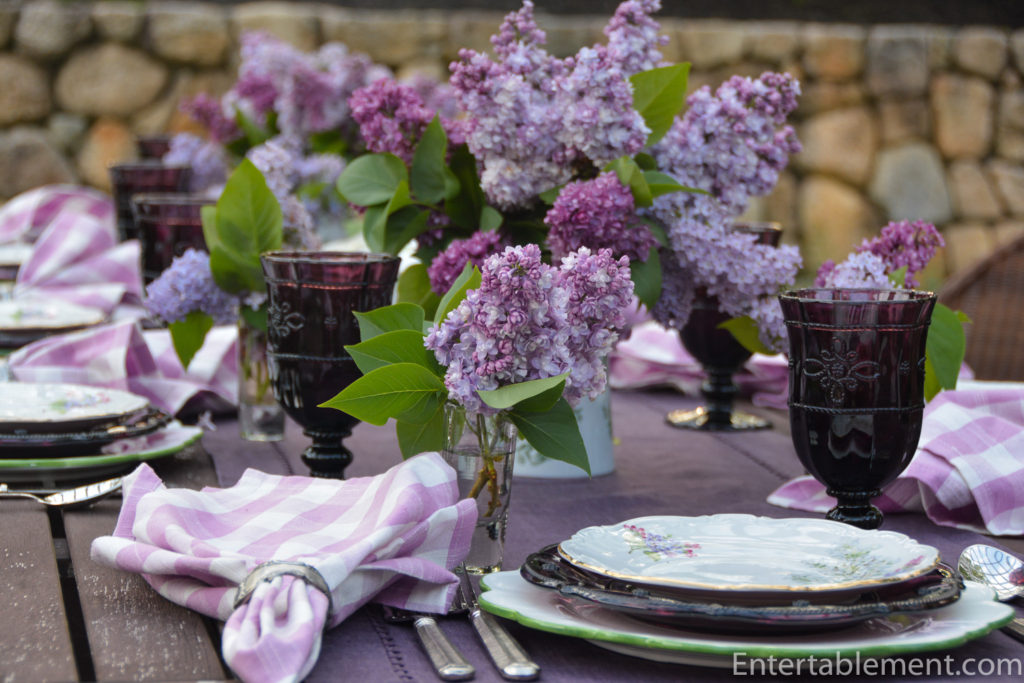 Syringa’s name comes from the Greek word for pipe, syrink, and that’s where the lilac’s scientific name, Syringa, originates. 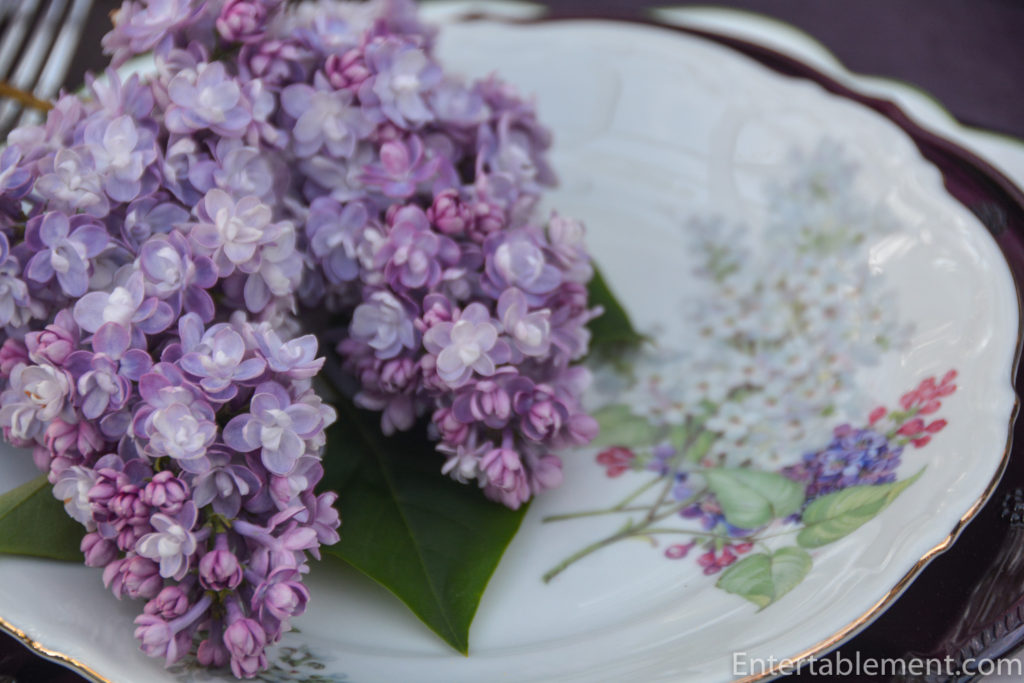 Because they’re such early bloomers, lilacs are synonymous with spring. They’re also thought to symbolize other things. For the Celtics, they’re magical because of their sweet scent. 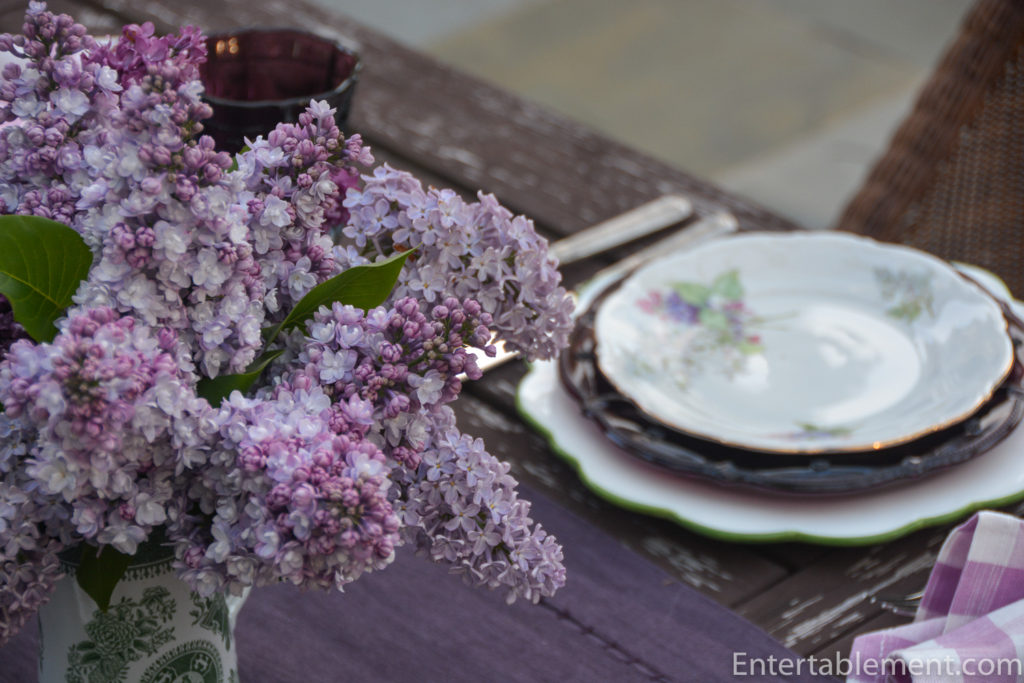 During the Victorian age, widows often wore lilacs as they represented old love. In Russia, holding a sprig of lilac over a newborn baby is thought to bring wisdom. Hmmm. This is a non-political blog so I will withhold any comment. 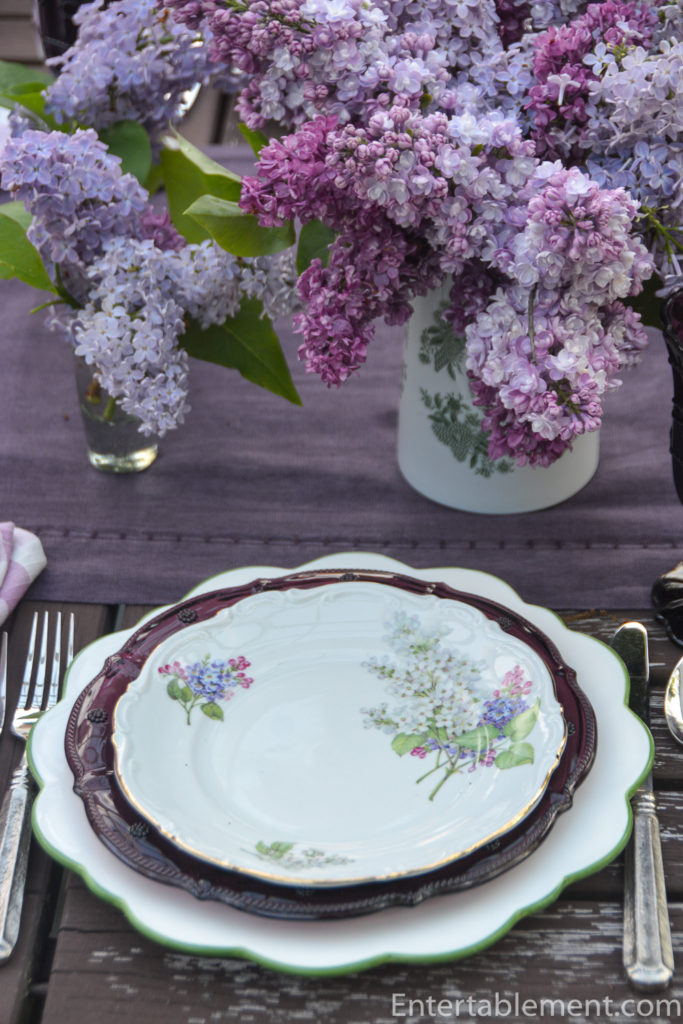 Each different colour of lilac has its own specific meaning. White lilacs are thought to indicate purity and innocence; purple lilacs to signify spirituality. 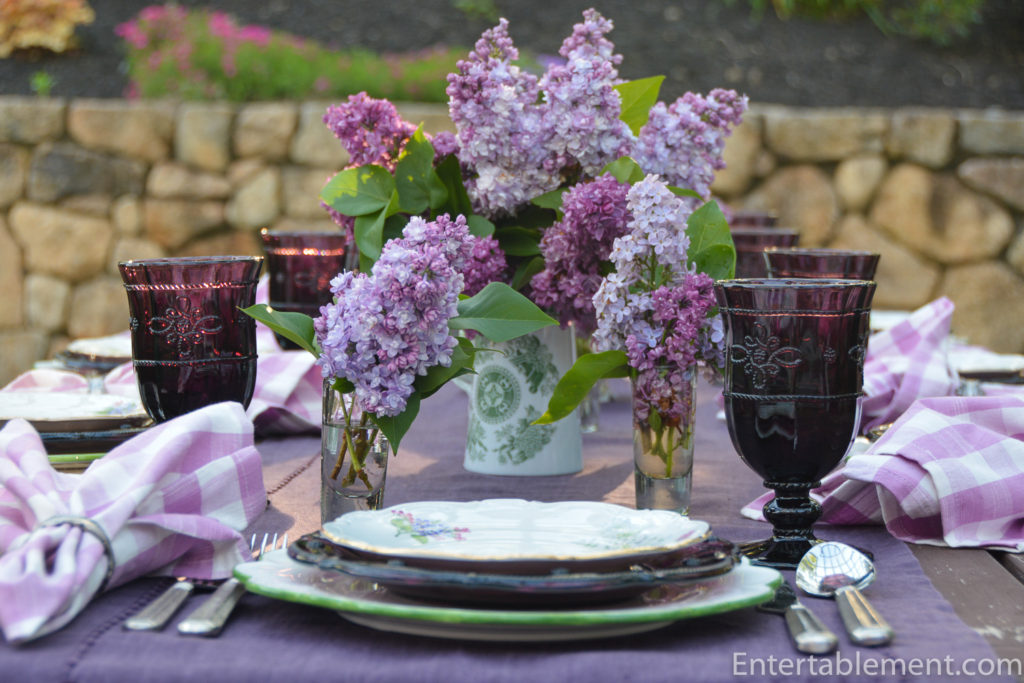 Among the purples, the bluer blooms symbolize happiness and tranquillity. Magenta lilacs are for love and passion. 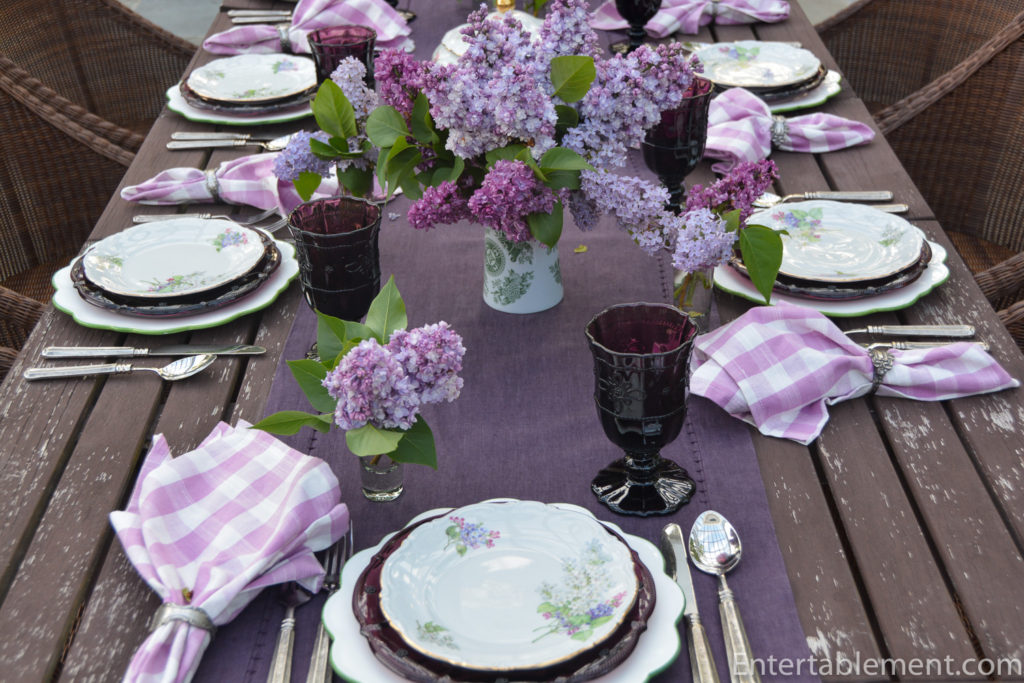 Although uncommon in North America, there is also a yellow variety, ‘Primrose’. It was only introduced in 1949 and hasn’t had a chance to accumulate any symbolic meaning. 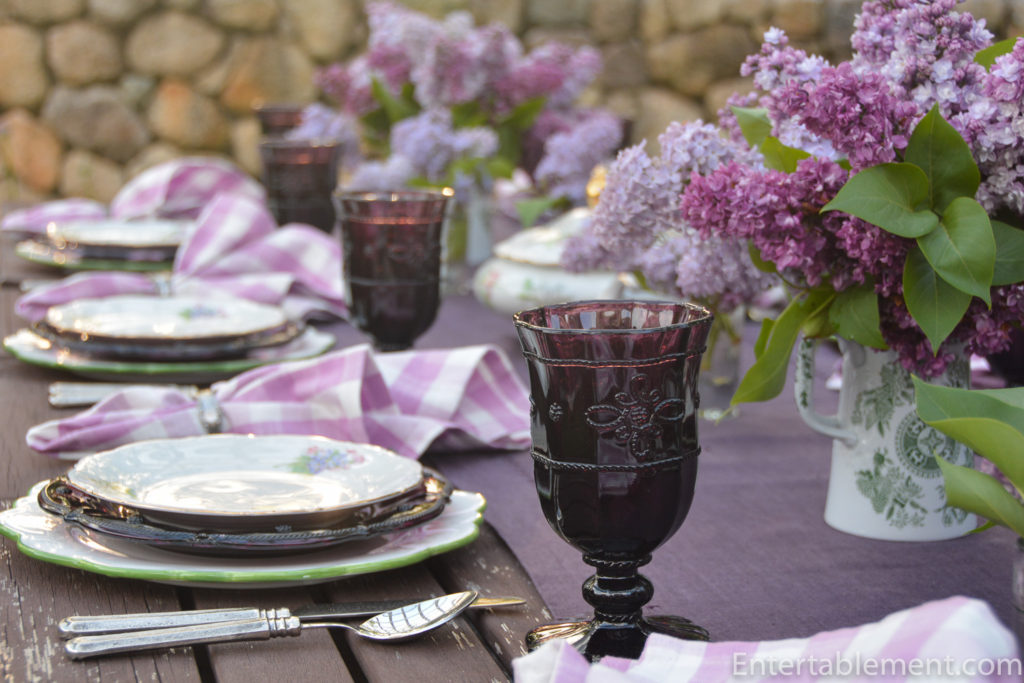 Whatever the colour, I adore lilacs. It’s such a short season, let’s make the most of it. 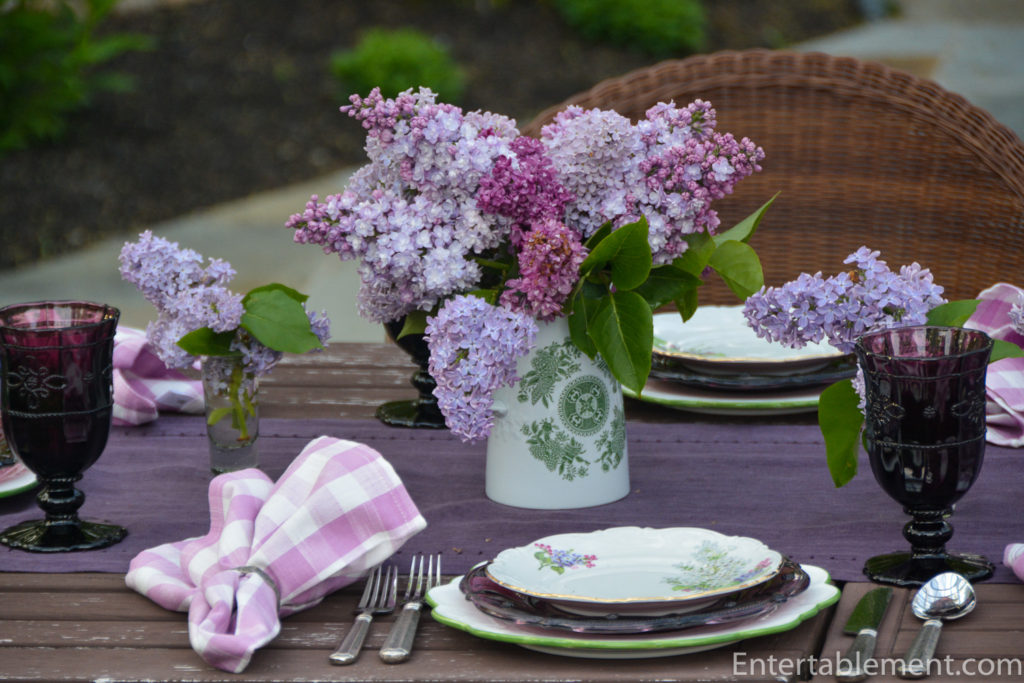 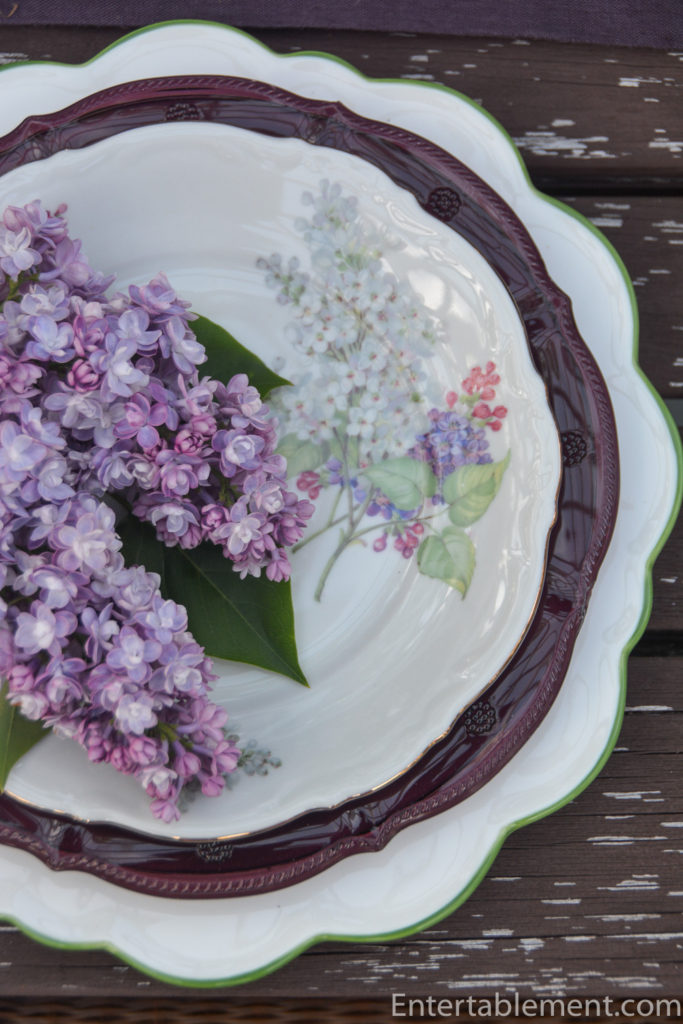